No signs of intestinal perforation or obstruction were observed, although minimal fat stranding and fluid and mild wall thickening with submucous oedema of perilesional colon was detected, consistent with colitis (Figure 1).

Whole-body PET-CT (Figure 2) showed marked 18F-FDG uptake in the gastrointestinal lesion (SUVmax 10.6) and in the hepatic lesions and mesenteric, muscular and subcutaneous implants visualized in CECT but it also showed supradiaphragmatic dissemination and osseous metastases in left femur and sternum.

Colonoscopy revealed a vegetant mass with inner marginal ulceration and necrosis and histopathological analysis demonstrated a poorly differentiated lesion, positive for S100, SOX-10 and Melan A consistent with metastases of melanoma.

58% of melanoma patients have gastrointestinal metastases at time of death and they represent one third of all small bowel metastases [1-2].

Gastrointestinal metastases are mostly asymptomatic. Only 1-5% of cases present with non-specific symptoms such as abdominal pain, gastrointestinal blood loss and weight loss.

There are few cases of intestinal obstruction, intussusception and perforation reported in the literature.

Metastases of melanoma are mostly localized in the small bowel, with discrepancies in the frequency between jejunum and ilium [1-4]. Other locations include colon, stomach and rectum and extremely rare in esophagus.

The pattern of presentation depends on vascular supply and tumor growth rate [1].

Deposit in the submucosa from a hematogenous spread results in polypoid pattern, the most common, that appears as multiple submucosal nodules with heterogeneous enhancement and central ulceration in large ones [5-6].

Deposit in the submucosa from a lymphatic spread results in an infiltrating pattern with irregular and thickened wall (“apple-core” sign), similar to colorectal adenocarcinoma [6].

Serosal deposit results in a cavitary pattern with circumferential thickening and high risk of necrosis and perforation, or in an exoenteric pattern with fistulous tracts, similar to Chron’s disease [4-6].

10% of melanoma metastases conditioned intussusceptions. Aneurysmal dilatation is extremely rare and differential diagnosis with lymphoma should be made [6].

CECT offers a sensitivity of 66% because it hardly detects little polyps [6].

In patients with disseminated melanoma, immunotherapy based on anti-PD1 and anti-CTLA4 antibodies and BRAF/MEK inhibitors offer better progression-free and overall survival compared with chemotherapy [5-6].

In our case, the patient died a few days after the diagnosis before treatment was proposed.

Melanoma metastases should be included in the differential diagnosis of unique or multiple lesions in the small bowel in patients with known melanoma. 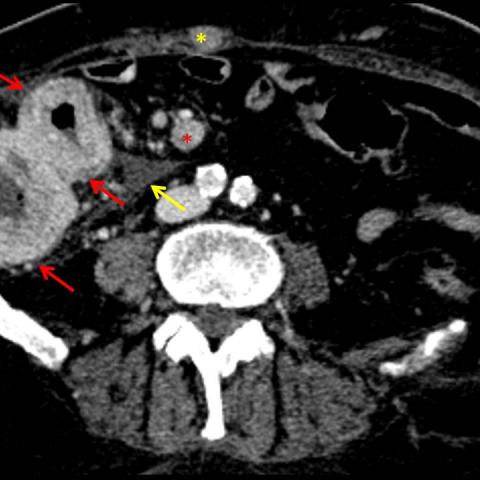 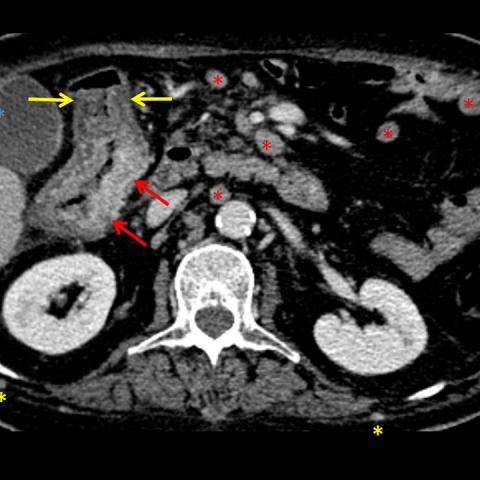 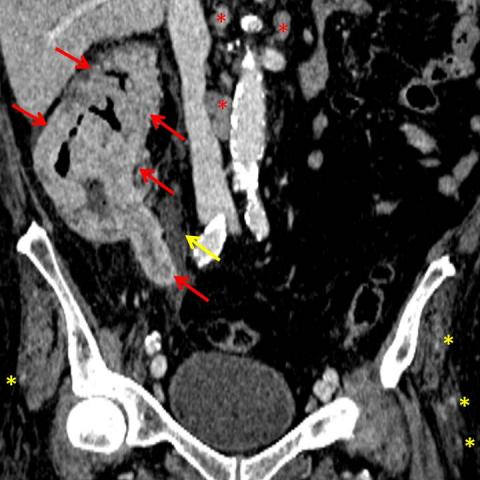 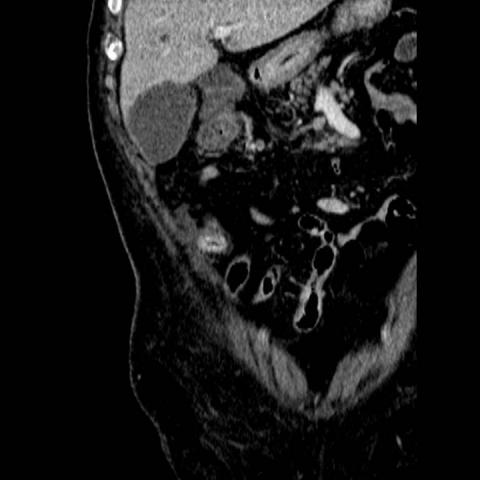 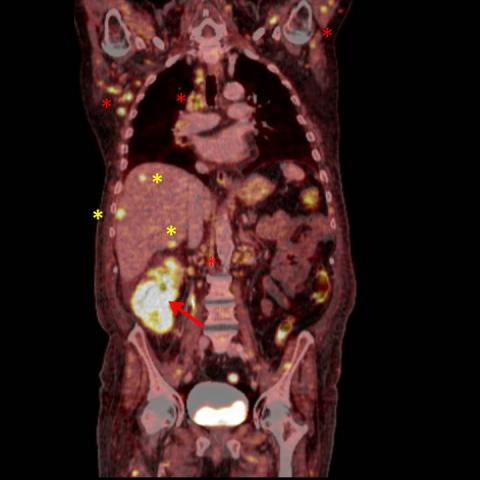 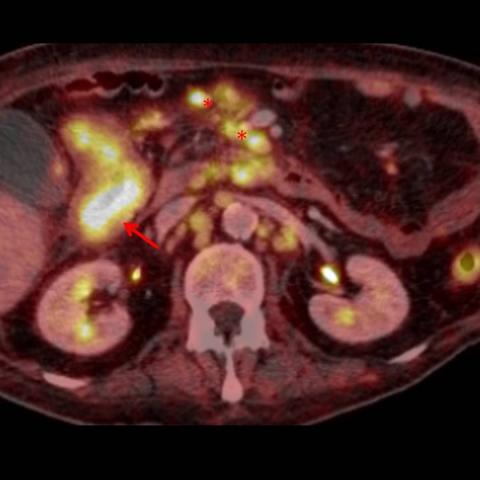 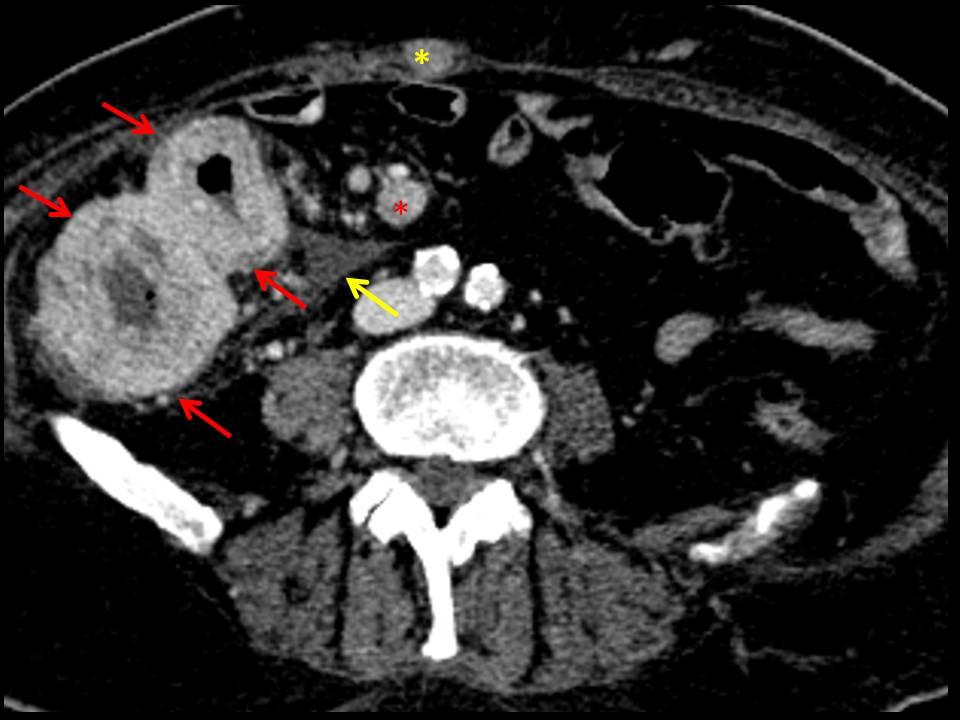 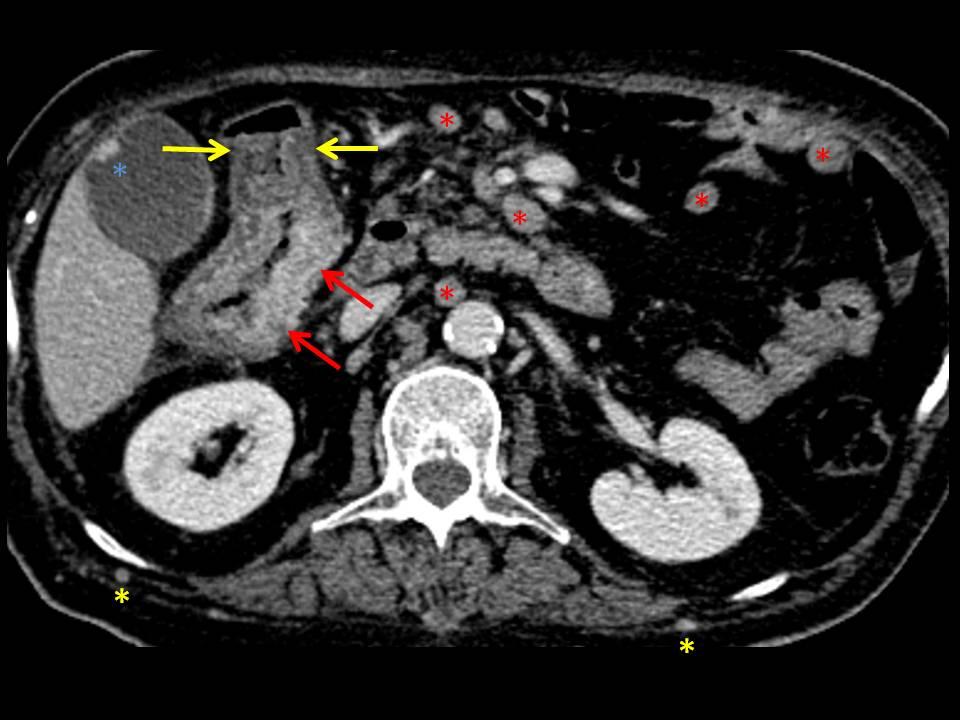 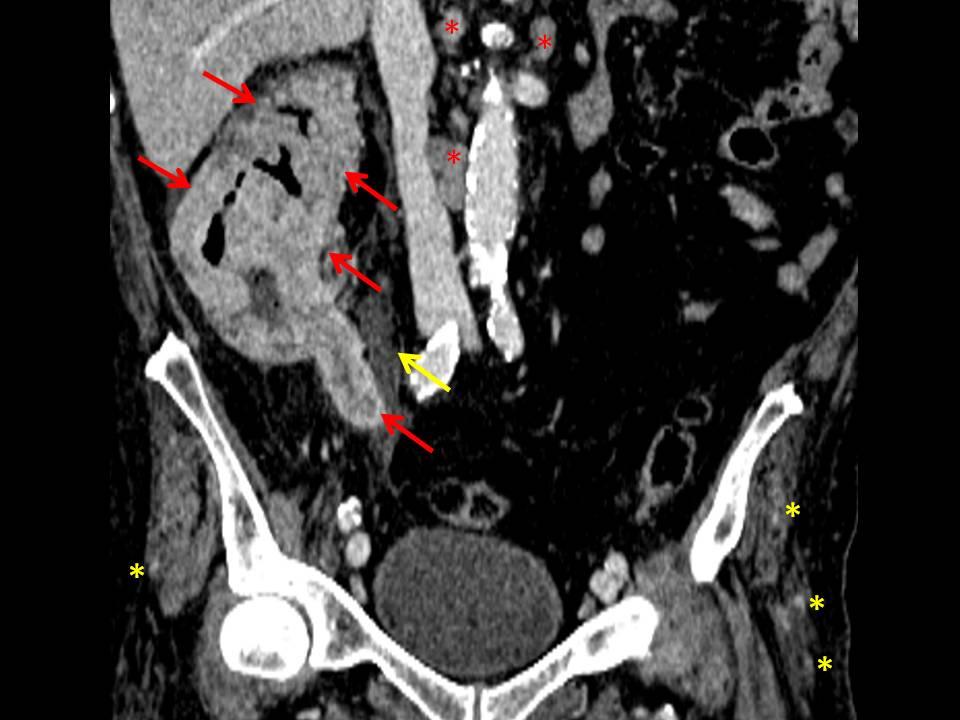 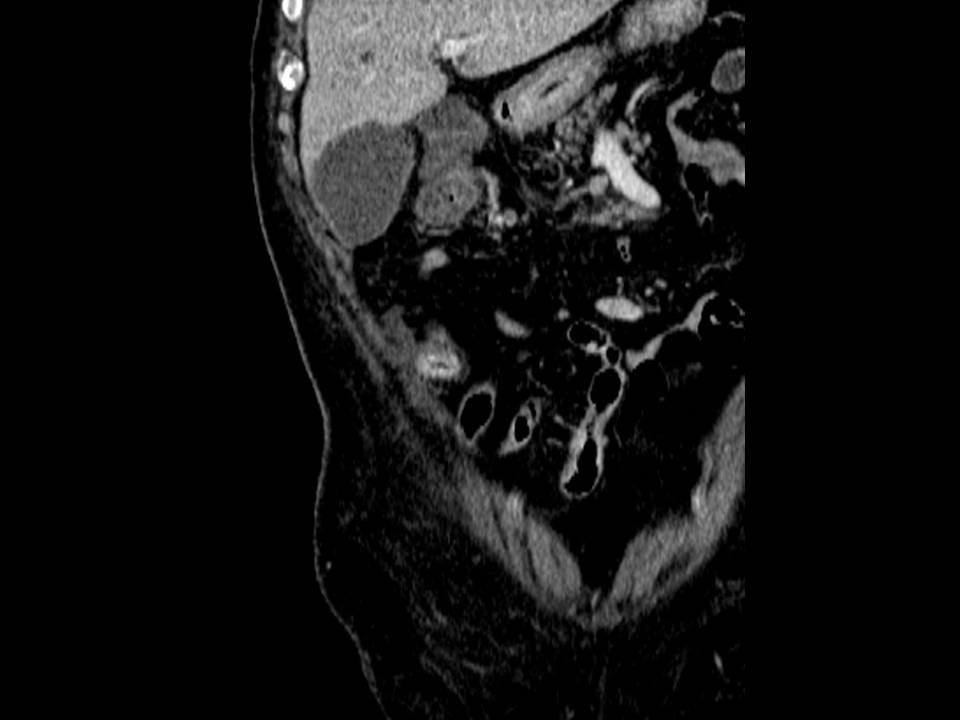 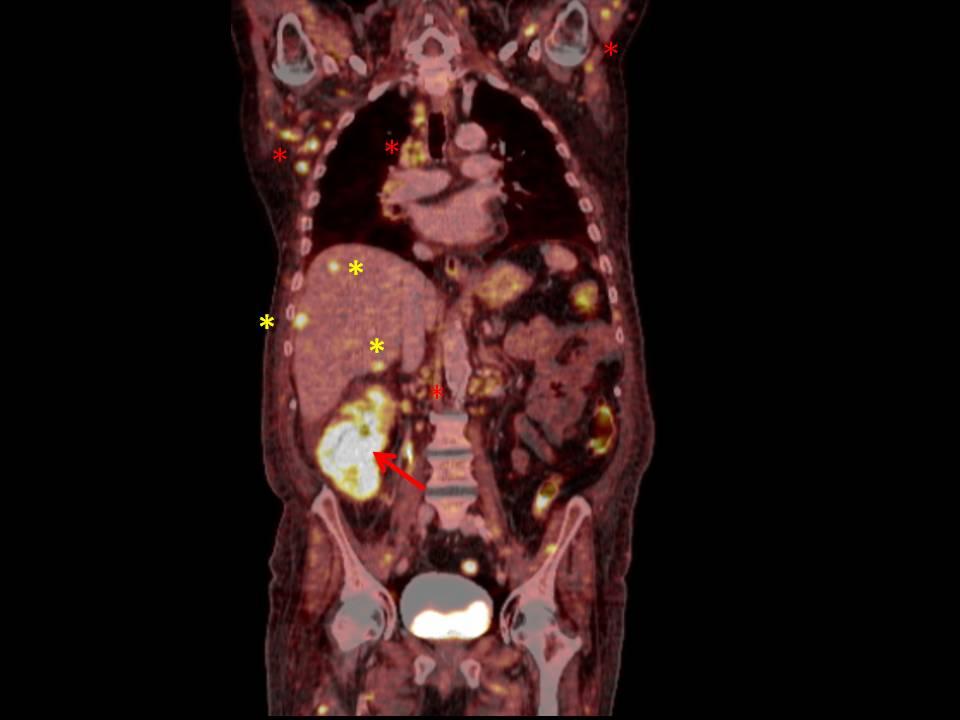 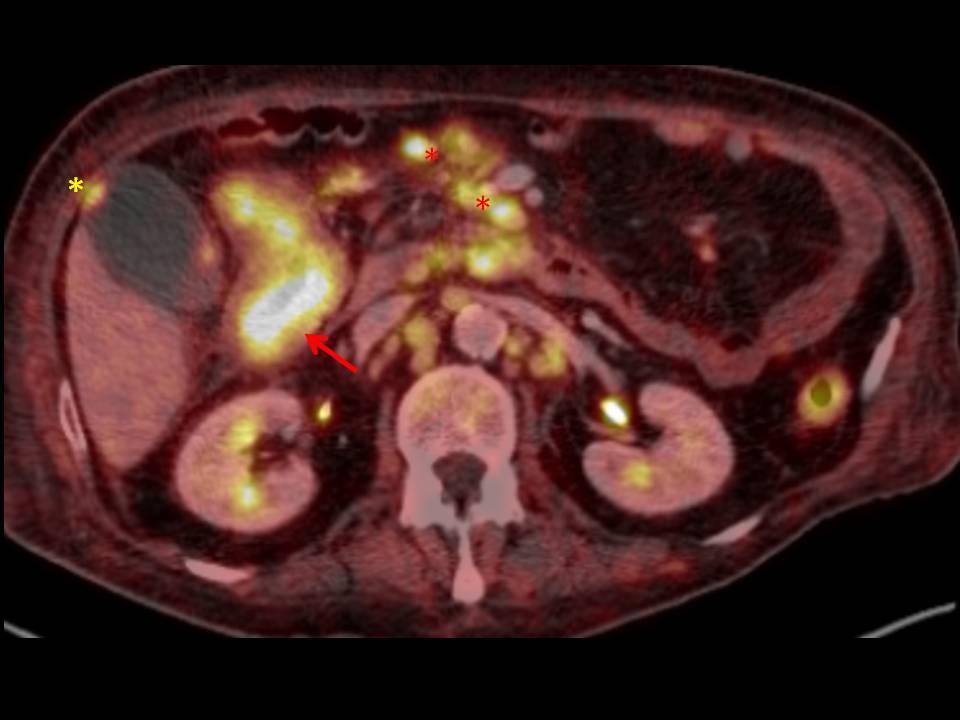