A 54-year-old woman with known arterial hypertension admitted to the emergency department with epigastric pain and nausea for the previous 4 hours. During her stay in the emergency room, she became unstable, with hypotension and tachycardia. Hemogram showed a decrease of 2,5g/dL of haemoglobin in 5 hours.

Computed Tomography (CT) demonstrated a rounded lesion in the left upper quadrant of the abdomen, in proximity to the pancreatic tail and located superiorly and medially to the left kidney. It had a hyperdense component on CT before intravenous (IV) contrast administration, suggesting clotted blood (figure 1). After IV contrast, it filled almost completely with contrast, with opacification similar to that of the splenic artery, which was seen to be its origin (figure 2). This communication between the lesion and the splenic artery was best depicted on sagittal and coronal reconstructions (figures 3 and 4)

Additionally, there was peri-hepatic and peri-splenic free fluid (figure 5) and haemoperitoneum in the pelvis (figure 6), consistent with rupture of the splenic artery aneurism.

Splenic artery aneurysms are the third most common site of intraabdominal aneurysms and are more frequent in women. [1]

The risk of rupture is about 2-10% for true aneurysms; but can be as high as 37% for pseudoaneurysms, with very high rates of mortality if untreated. [1]

Clinical setting can help differentiate a true aneurysm from a pseudoaneurysm, as the first is usually asymptomatic and the latter almost always present with symptoms. [1,3] The most common symptom is abdominal pain and it can be associated with upper or lower gastrointestinal bleeding or with haemorrhage into the pancreatic duct.

CT is the imaging method of choice. Arterial phase images are very important to make the diagnosis, usually obtained 20-30 seconds after the onset of peripheral intravenous contrast injection, which will show a vascular lesion arising from the splenic artery. 3D reconstructions may ease the diagnosis.

In the setting of haemorrhagic shock due to rupture of a splenic artery aneurysm, life-saving surgery usually requires splenectomy (figure 7). Elective repair with endovascular intervention or open surgery is indicated in all pseudoaneurysms and in true aneurysms with 2 cm or more in diameter or with rapid growth. [2] 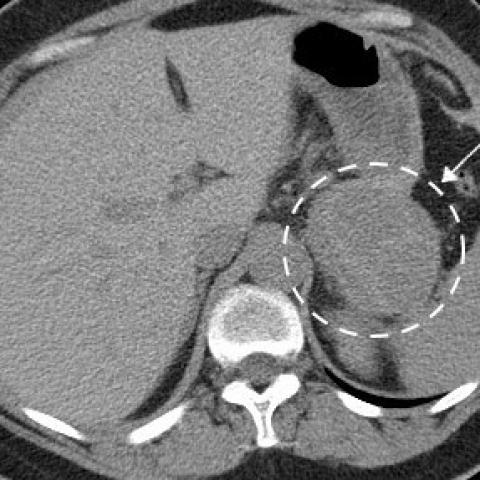 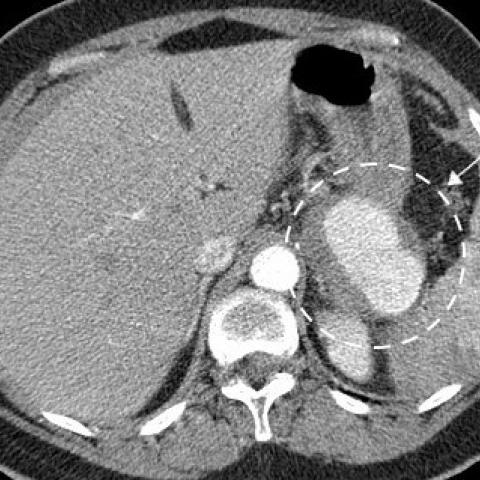 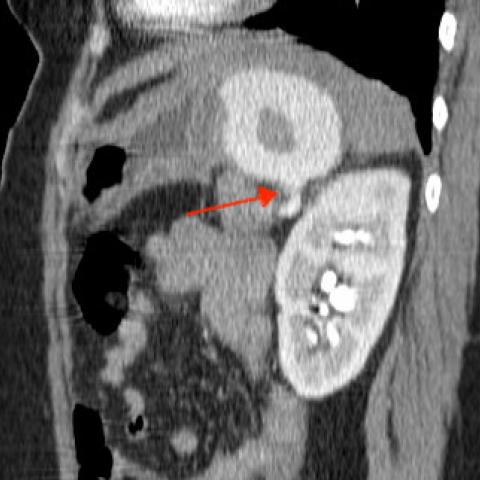 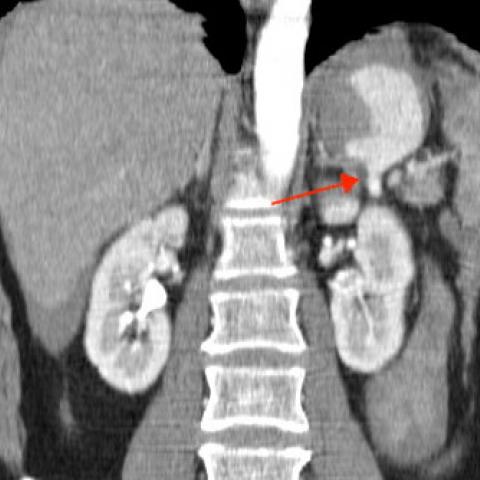 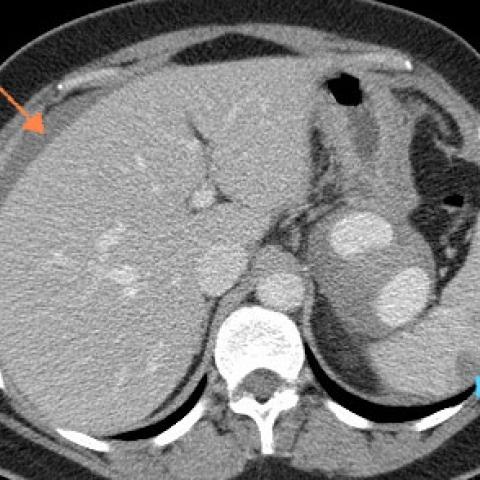 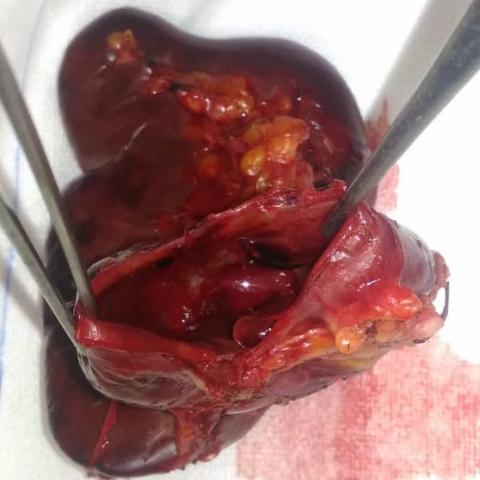 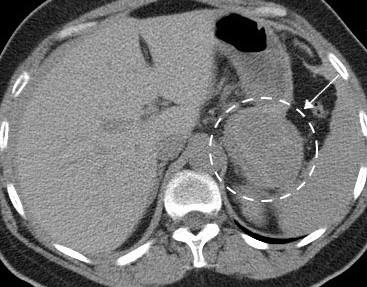 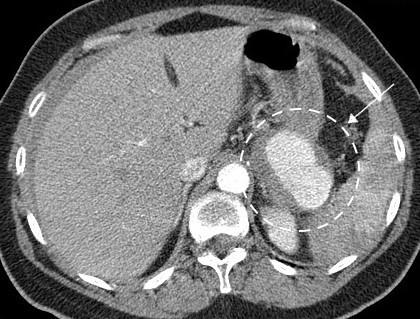 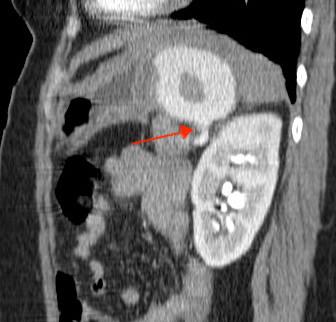 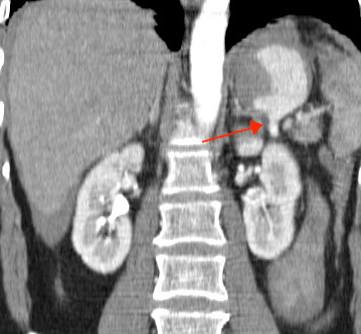 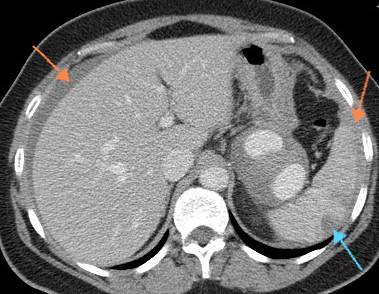 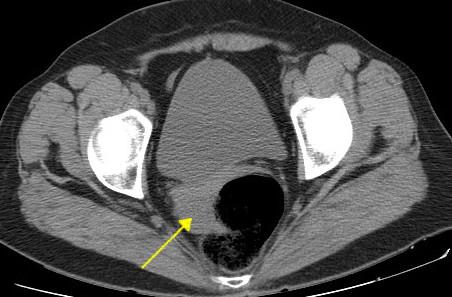 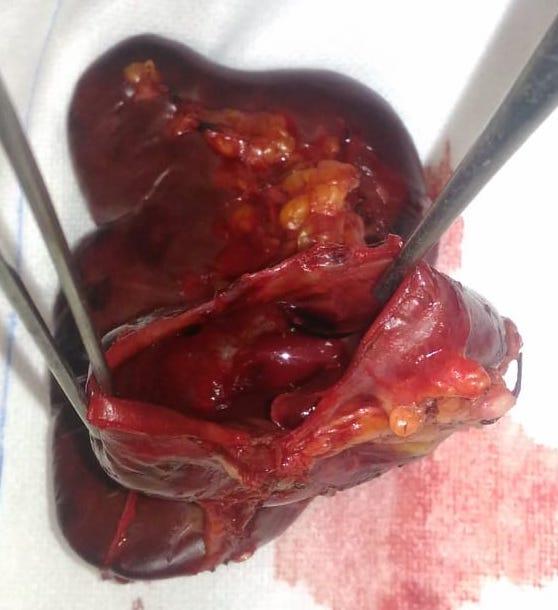