A 76-year-old woman was admitted for diarrhoea and fecaluria during the past two weeks, together with B-type symptoms such as weight loss and tiredness. No gastrointestinal bleeding, fever nor infection symptoms were involved. Laboratory test showed leukopenia.

Contrast-enhanced MDCT was performed, showing a thickened, enhanced bladder wall and some small gas bubbles inside the bladder. A small bowel segment located in the pelvis was distended with aneurysmal dilatation and had a circumferential wall thickening; its enhancement was heterogeneous. There was an abnormal communication between the affected gut and the bladder.

The patient then underwent a contrast-enhanced entero-RM afterwards. It demonstrated a 1.5 x 1 cm fistula comunicating the posterior wall of the thickened small bowel segment and the bladder.

The caecum was located within the pelvis, with no pathological findings.

No pathologic sized or shaped lymph nodes were seen.

GI lymphomas are the result of an accumulation of lymphocytic tumour cells [1]. The majority of GI lymphomas are of B-cell origin: lymphoid cells at a different stage of development and diverse biologic behaviour [1].  Diffuse large B-cell lymphoma is the dominant histologic subtype [2].

Gastrointestinal tract is the most frequent primary extranodal localization of non-Hodgkin lymphoma (20%) [3]: the stomach is the most common site, followed by the small intestine. Most commonly occur around the sixth decade and are rare in childhood. It tends to locate in one segment, unlike the nodal form.

Small bowel lymphoma is the 15% of neoplasms in this site [4] , being terminal ileum the most affected segment. There are known risk factors such as HIV, Helicobacter pylori, celiac disease, inflammatory bowel disease and organ transplant [4].

Clinical presentation is variable and sometimes makes it hard to distinguish from benign causes. It may include from asymptomatic forms to abdominal pain, gastrointestinal bleeding, diarrhoea and B-type symptoms [4]. It is possible but not very frequent that the disease makes its debut as a complication (perforation or obstruction).

Ulcerative lesion is also a possible pattern. Due to lack of desmoplastic reaction, even though involvement may be extensive, obstruction is rare. When it occurs, it can make it hard to differentiate from adenocarcinoma.

CT is useful both for staging and in the follow-up after treatment. MR has an excellent contrast resolution and provides both anatomical and functional information about bowel loops.

The involved segment is resected, with subsequent chemoradiotherapy [6,7]. Most patients reach total remission or stability. Making an early-stage diagnosis, ileocecal location and b-cell subtype are considered factors of good prognosis.

Gastrointestinal lymphoma is able to mimic other neoplastic or inflammatory conditions. Although a definitive diagnosis may be only possible with biopsy, it is important having it in mind in the presence of certain imaging appearances and the appropriate clinical setting. Finding a bulky mass of the GI tract, bowel wall thickening or a polypoidal mass should alert the radiologist to consider this diagnosis 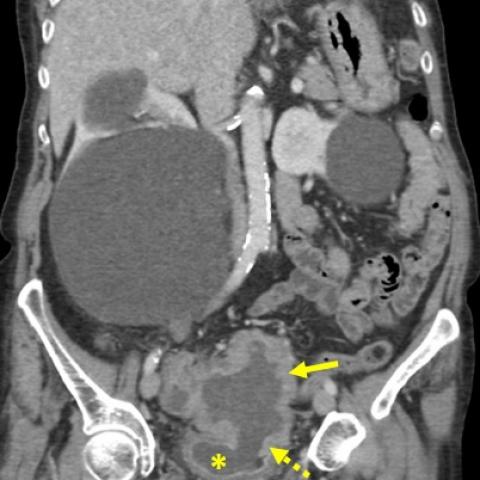 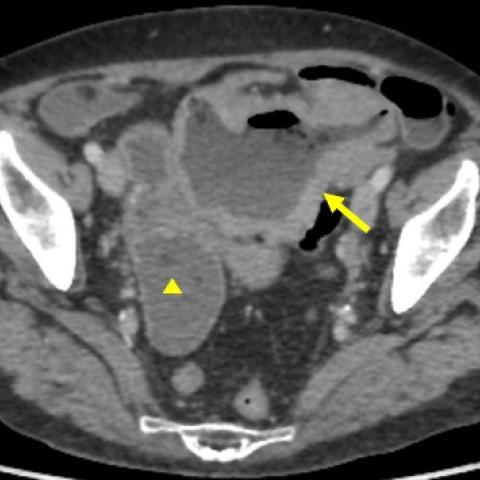 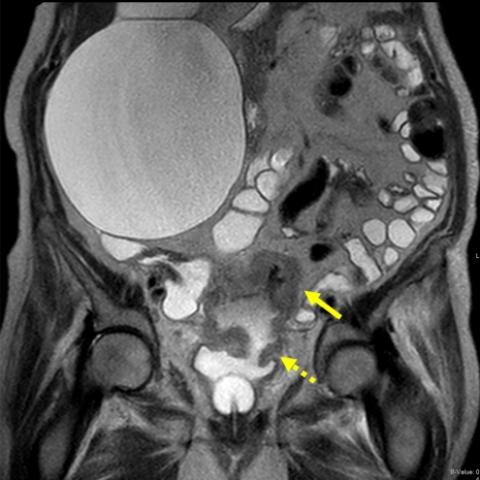 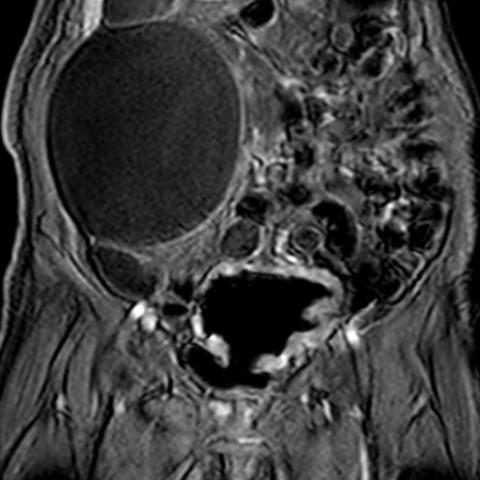 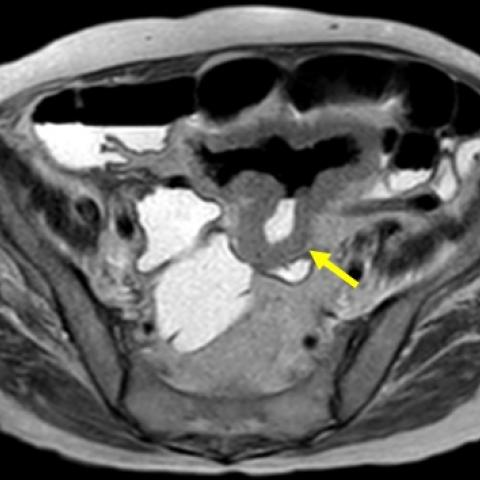 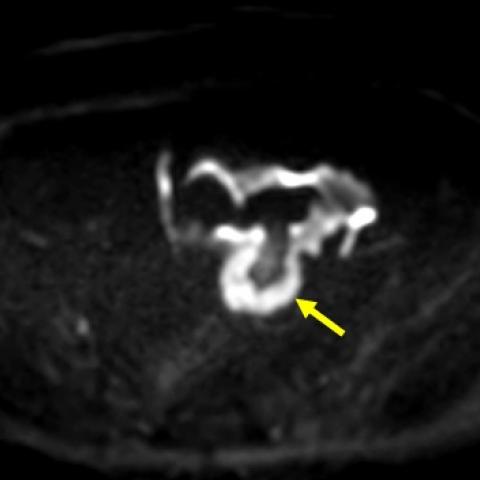 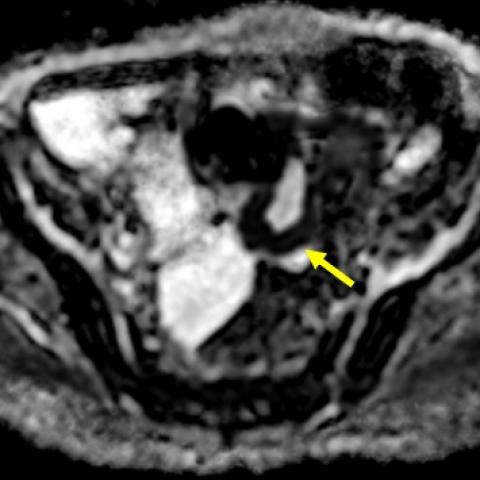 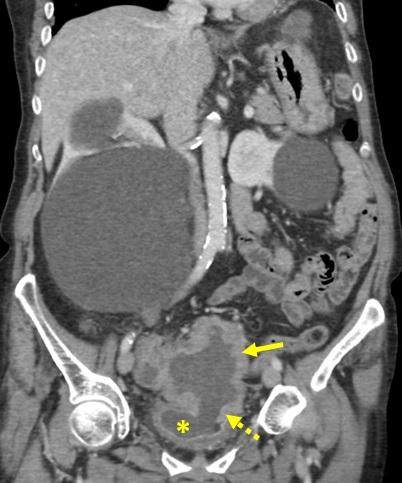 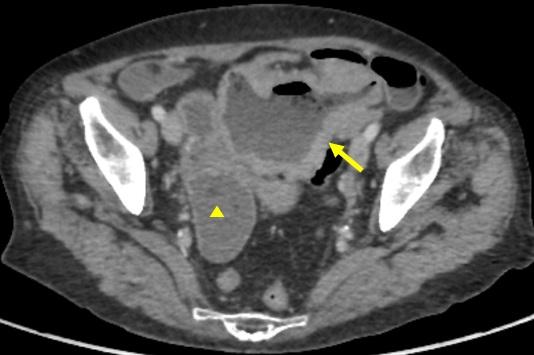 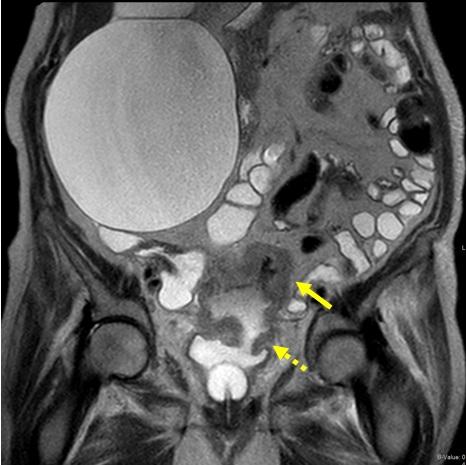 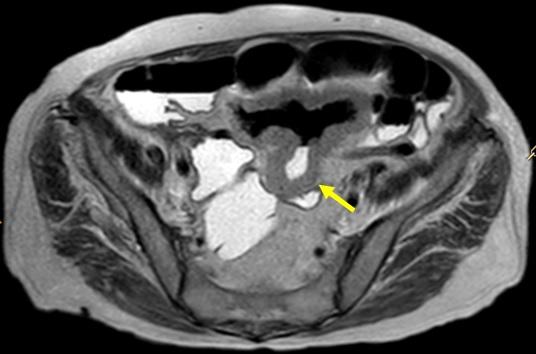 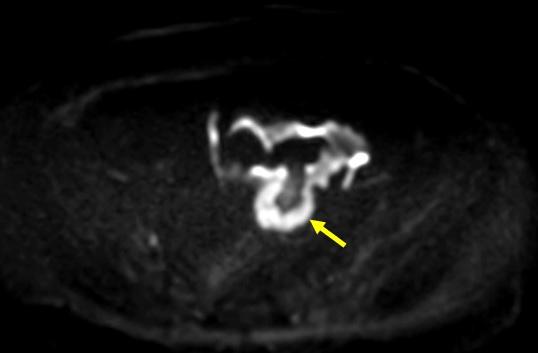 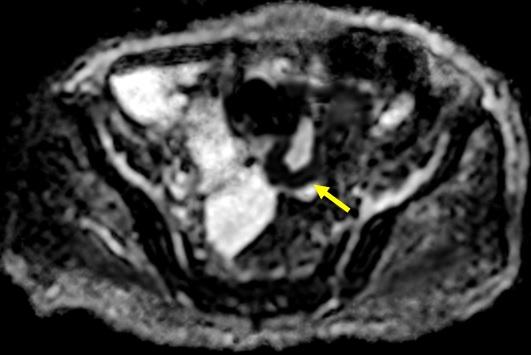