A 79 year-old women, with no relevant medical history, consults in the emergency room for 2 months abdominal pain. It is continuous, located in the epigastrium, accompanied by weight loss of 12 kilograms and loss of appetite. The physical exam only shows slight pain in the right hypochondrium.

In the abdomen ultrasound exam, we can see an enlargement of the portal vein (Figure 1), with echoic intraluminal content that extends from the liver hilum to the upper mesenteric vein (Figure 2). The CT exam confirms the presence of this lesion (Figure 3), that as suspected, a heterogenous mass, which infiltrated the main portal vein occupying all the portal vein, affecting the confluence of the superior mesenteric and splenic veins as well as the intrahepatic part of the portal vein. It causes no significant dilatation of the biliary tract and the pancreatic gland seems to be unaltered, at least its corpus and tail.

Leiomyosarcoma is a malignant mesenchymal tumour of smooth muscle cells that represents the second most frequent malignant soft tissue tumour in adults, only after liposarcoma [1]. It is a rare disease, with vascular leiomyosarcomas accounting for only 5% of all leiomyosarcomas [2]. It often arises from the inferior vena cava, even though there are cases described in the renal, mesenteric or hepatic veins.

Imaging revealed a voluminous mass compromising the entire length of the portal vein from the hepatic hilum to the splenic-mesenteric confluence near the root of the mesentery. Given the absence of distance metastatic disease, a biopsy of the mass was performed guided with endoscopic ultrasound. The pathology report of the sample acquired with aspiration with a fine needle made it compatible with a leiomyosarcoma originating in the mentioned vessel.

There have been few cases of this entity described in the literature. Often, as it was our case, it manifests as an imaging finding when looking for a suspected neoplasm. Differential diagnoses of a portovenous mass include pancreatic adenocarcinoma, hilar cholangiocarcinoma and hepatocellular carcinoma, as well as pancreatic neuroendocrine tumour [3].

In our case, given the appearance and the complete intravascular component, it had to be added to the possibility of a neoplasm arising from the portal vein. To discard the other entities, there was no dilated common bile or pancreatic duct, data that makes a primary pancreatic cancer less likely, as well as its intravascular component in the imaging studies, made cholangiocarcinoma improbable. Hepatocarcinoma and neuroendocrine pancreatic tumours may present intravascular growth. We do not have a dysmorphic liver and a pure extra-hepatic localization that help in excluding HCC, while lack of associated pancreatic mass can help in excluding pancreatic NET.

Surgical excision tends to be the chosen option if the intention is to be curative [4]. Even though, there are so little cases in the literature that treatment options vary. In our case, the leiomyosarcoma was so extended so chemotherapy was chosen to obtain local control of the condition.

Prognosis is poor, with high rates of recurrence if the treatment was surgical [2]. Often, adjuvant chemotherapy is used to obtain local control but with little success. In the case of our patient, twelve months after diagnosis, she is still alive, but the mass arising from the portal vein has grown in the last control after 4 cycles of chemotherapy. 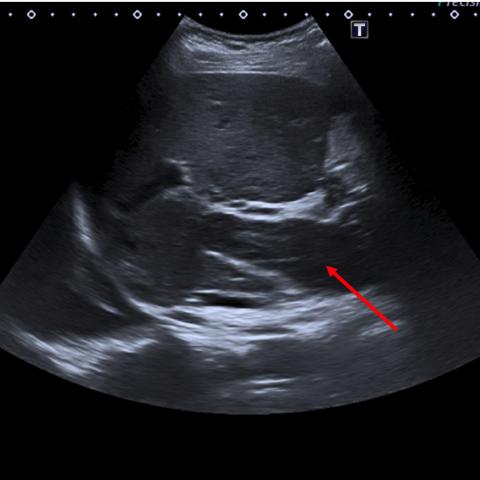 Enlargement of the portal vein at the hepatic hilum (red arrow), with presence of echogenic material in its lumen.
Figure 2 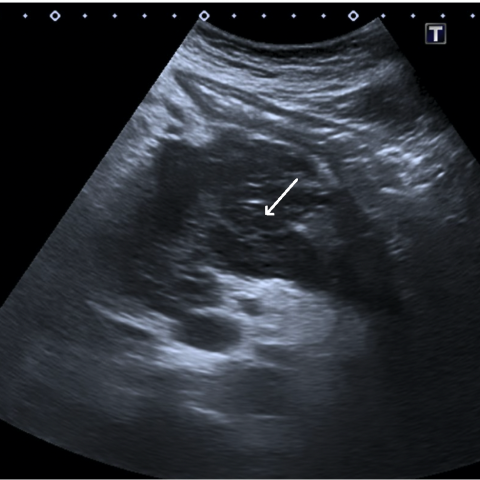 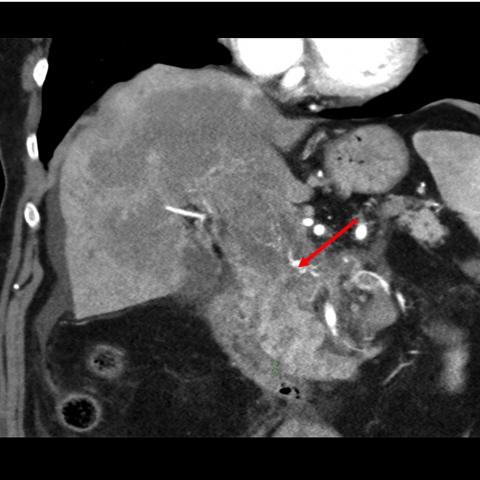 Coronal CT oblique reconstruction showing the whole mass (red arrow) that occupates the portal vein and the confluence of the superior mesenteric and splenic veins.
Figure 4 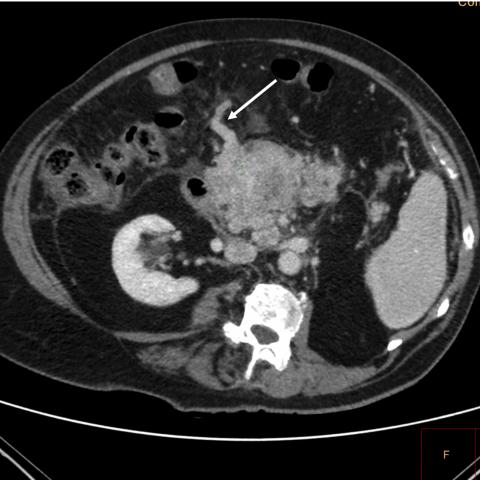 Axial CT image of the mass at the root of the mesentery with an tumoral extension into a small vein tributary (white arrow).
Figure 5 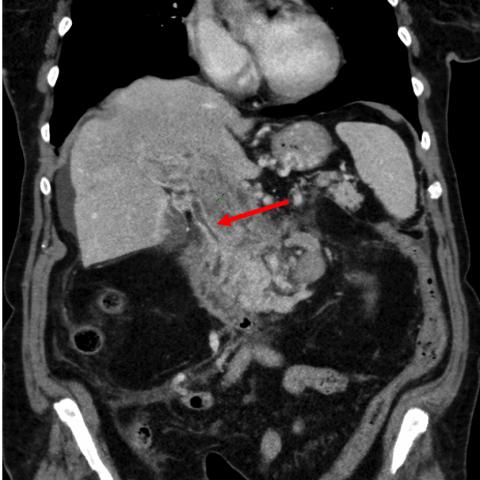 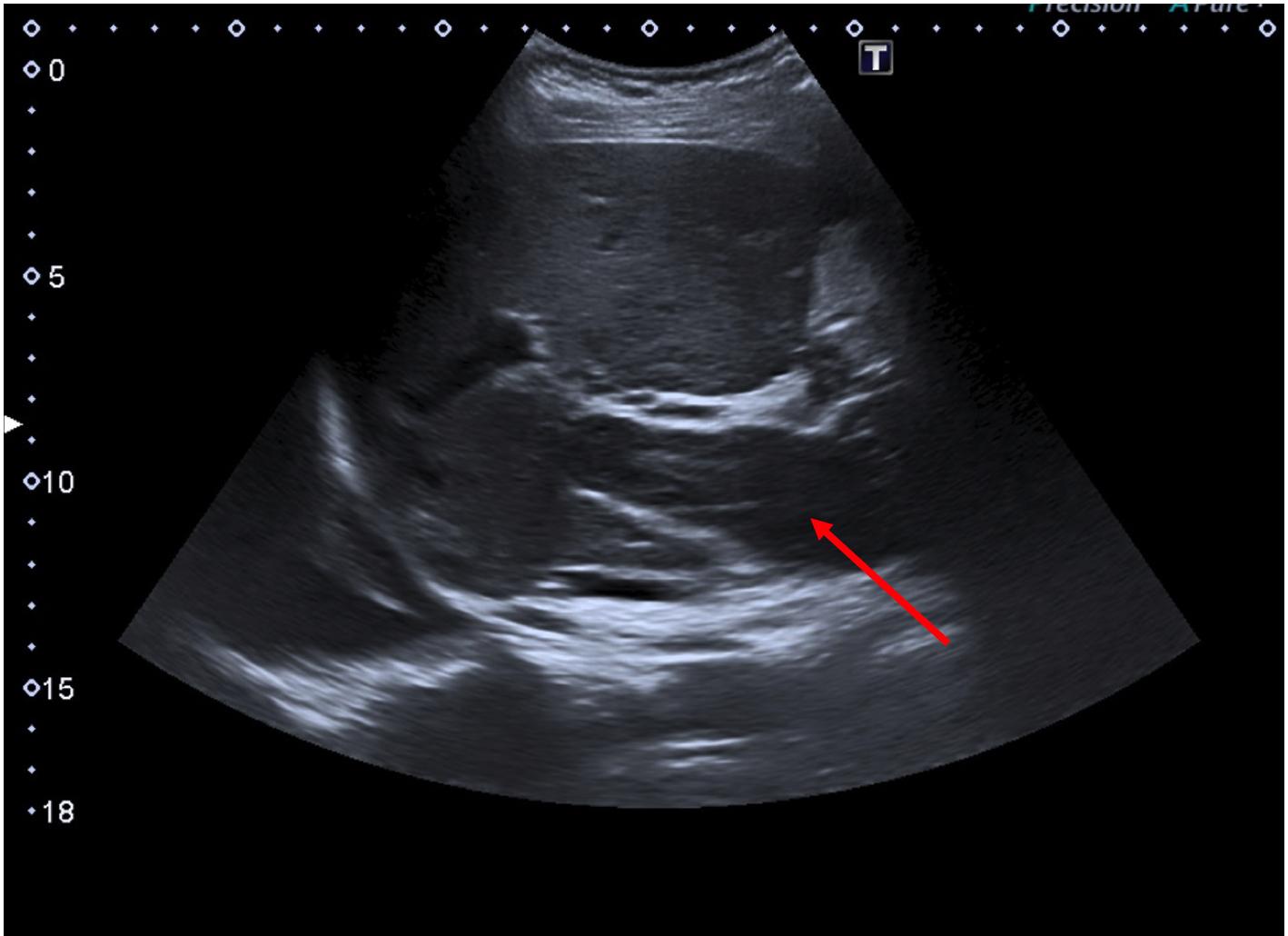 Enlargement of the portal vein at the hepatic hilum (red arrow), with presence of echogenic material in its lumen.
© Department of Radiology, Complexo Hospitalario Universitario A Coruña/ Spain 2019. 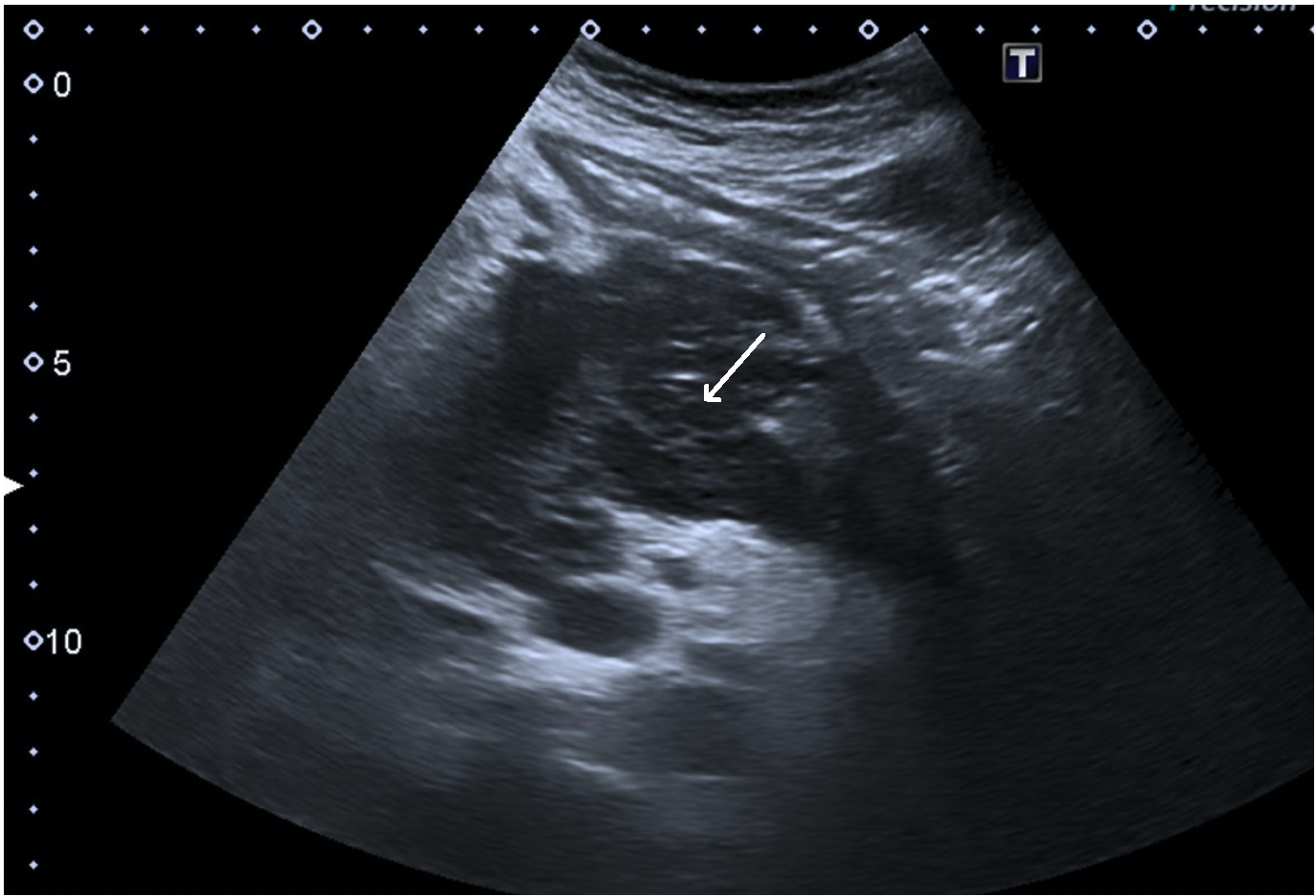 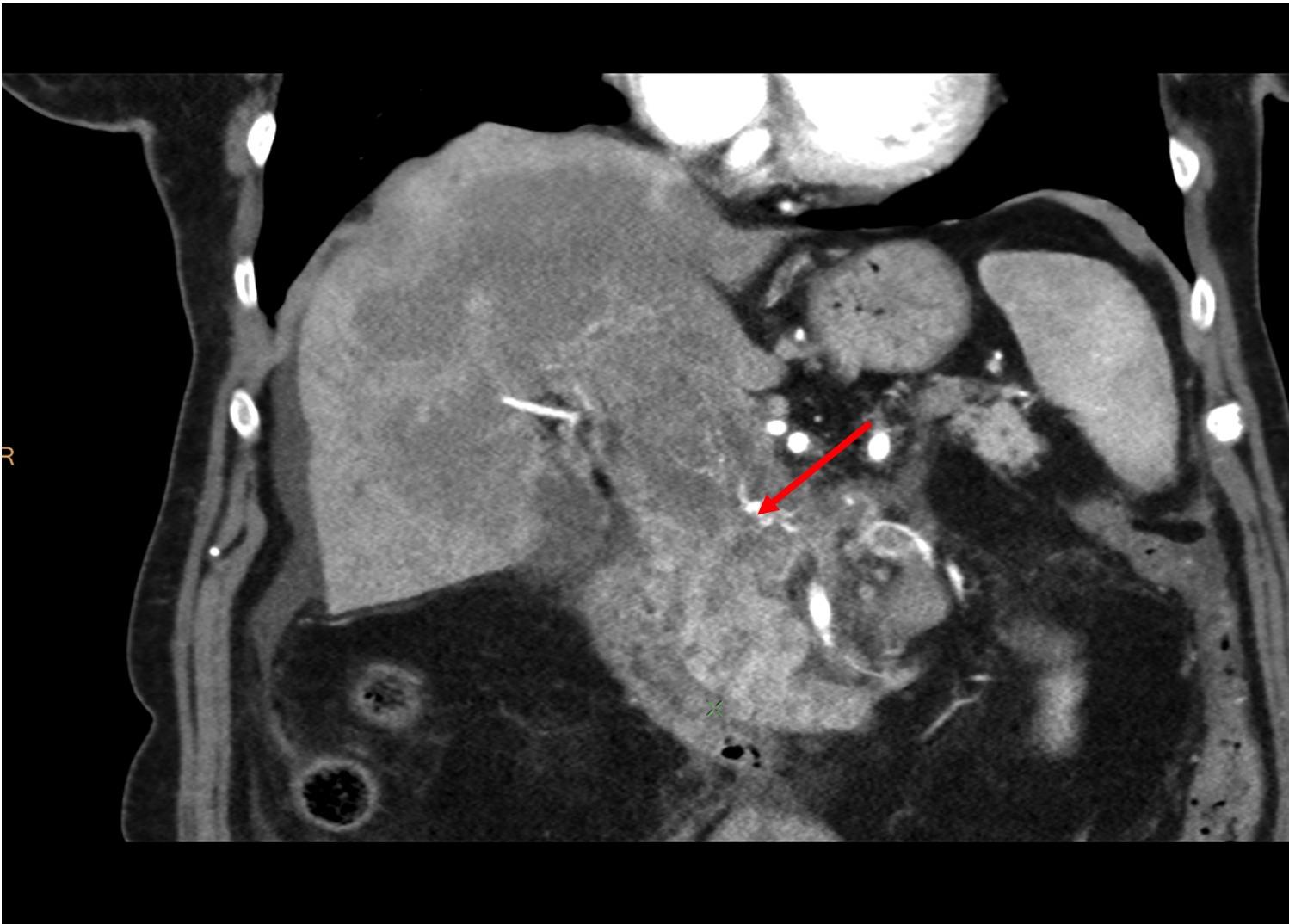 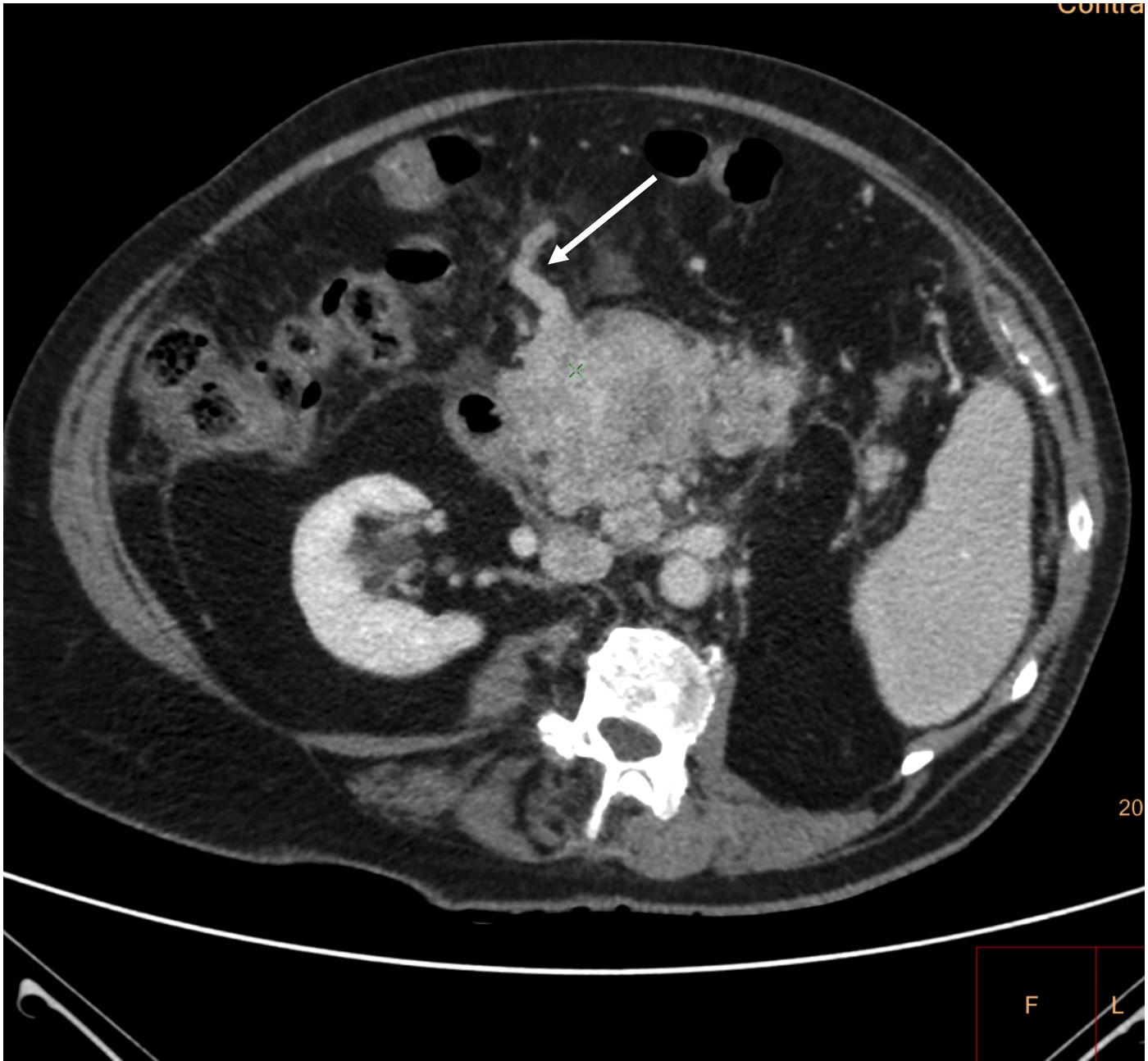 Axial CT image of the mass at the root of the mesentery with an tumoral extension into a small vein tributary (white arrow).
© Department of Radiology, Complexo Hospitalario Universitario A Coruña/ Spain 2019. 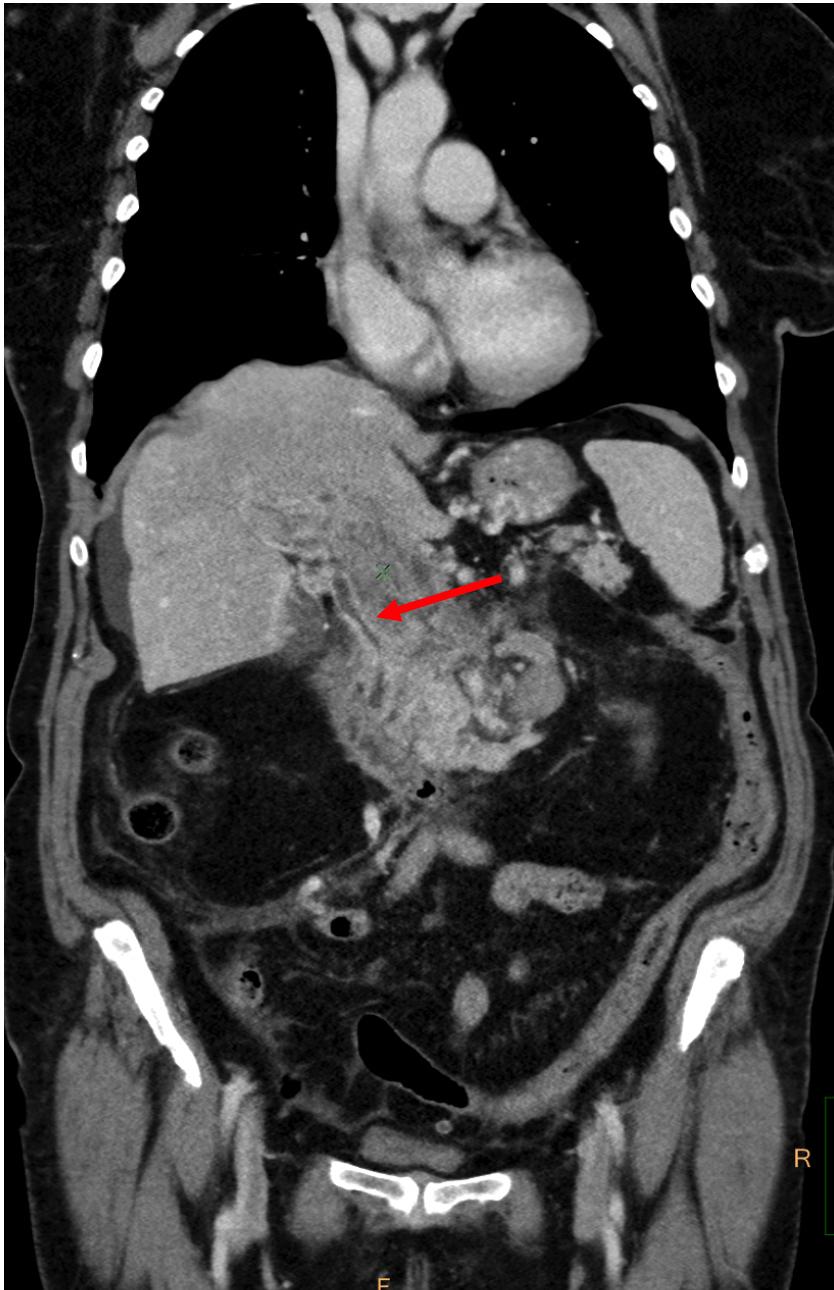