Cine Imaging in four- and three-chamber views shows dysfunctioning of the apical and midventricular left ventricular myocardium with discrete dyskinesia (Fig. 1a,1b, videos). The basal segments of the LV do not display any regional wall motion abnormalities.

TIRM-Imaging (Figs. 2a, 2b) and T1-Mapping (Figs. 3a, 3b) in the same projections delineate oedematous changes of the dysfunctioning myocardial segments going along with prolonged T1-relaxation times.

LGE imaging in the four-chamber-view (Fig. 4) precludes myocardial infarction as there is no relevant enhancement visible in the dysfunctioning myocardial segments.

In all imaging sequences, a thrombus formation in the apex of the left ventricle is illustrated (Video 1,2, Figs. 1-5).

The coronal reformat of an abdominal CT scan (Fig. 5) shows wedge-shaped perfusion defects especially in the right kidney and a solid tumour arising from the left adrenal gland.

In contrast to “classical” Takotsubo cardiomyopathy (TTC), patients with pheochromocytoma triggered TTC are significantly younger, and an identifiable antecedent stressor like acute medical illness, intense physical or emotional stress is much rarer (66% in classical TTC versus 29% in pheochrocytoma triggered TTC). Pheochromocytoma TTC has a higher prevalence of basal wall-motion abnormalities (up to 30% of cases), and up to 20 % of patients demonstrate global wall-motion abnormalities [2,3]. However, also in pheochromocytoma induced TTC, there is a predominance of women but in a significantly lower percentage (70% in pheochromocytoma induced TTC versus 90 % in classical TTC).

The clinical presentation may be more severe with a higher prevalence of shock, pulmonary oedema and heart failure. Arterial hypertension may be present in up to 50% of patients [4,5]. Due to the echographic detection of an intraventricular thrombus and the clinical symptoms of nausea and headache, MRI of the head was performed in our patient which documented several cerebral emboli, that – fortunately - did not lead to persisting neurological deficits.

The pathophysiology of catecholamine excess in the myocardium includes functional hypoxia due to increased contractility and coronary spam leading to decreased blood flow, increased oxygen consumption and generation of oxidative stress. In TTC, excessive catecholamine stimulation triggers a switch in intracellular signal trafficking, from Gs protein to Gi protein signalling through the ß2-adrenoreceptors. This switch to ß2-adrenoreceptor-Gi protein signalling protects against the proapoptic effects of intense activation of ß1-adrenoreceptors, it is also negatively inotropic. This effect is greatest at the apical myocardium, due to the higher density of the ß2-adrenoreceptor [6].

In our patient, the catecholamine metabolites in urine including vanillylmandelic acid (103 mg/d [< 6.6mg/d], normetanephrine [>3000 µg/l], and metanephrine [>1000µg/l]) were strikingly increased. Until the time of adrenalectomy, the patient received therapeutic anticoagulation with unfractionated heparin, fluid substitution, If channel blocker and alpha1-receptor-blocker. Postoperatively, all symptoms disappeared, the left ventricle returned to normal function, and echocardiography documented complete remission of the ventricular thrombus. 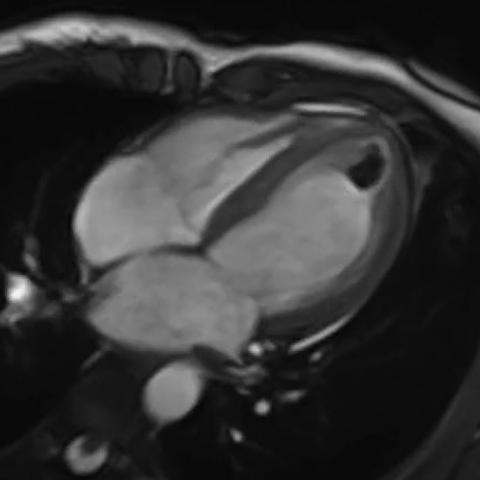 Play Video
Cine imaging in the 4- and 3-chamber-views 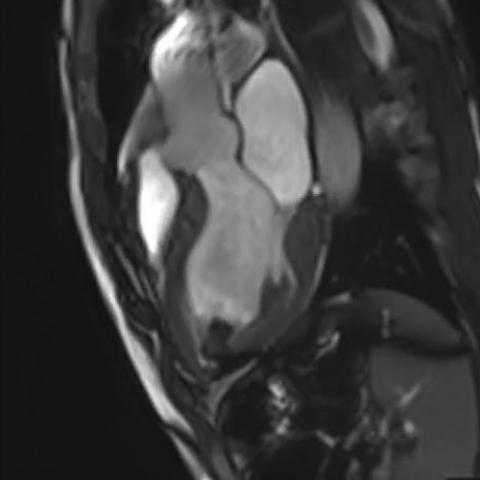 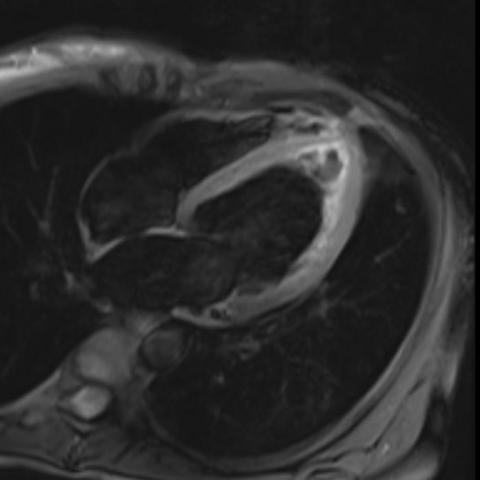 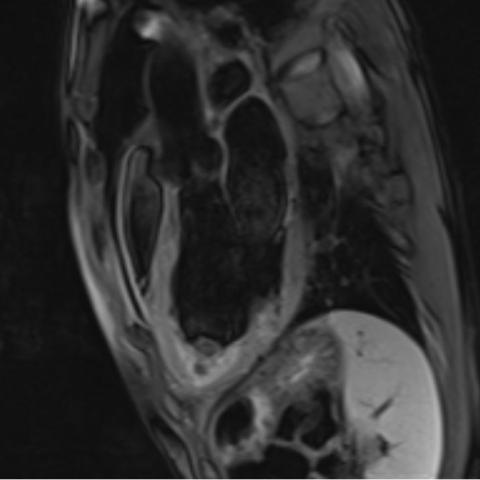 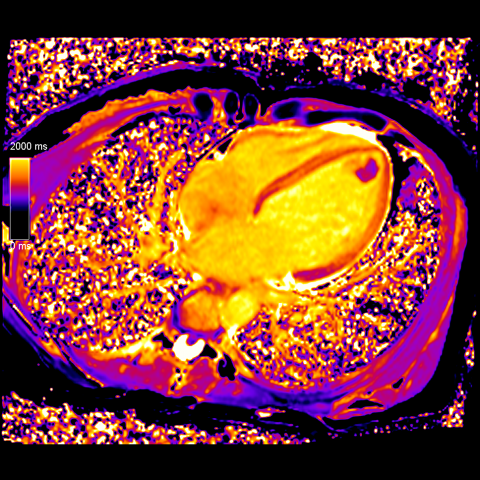 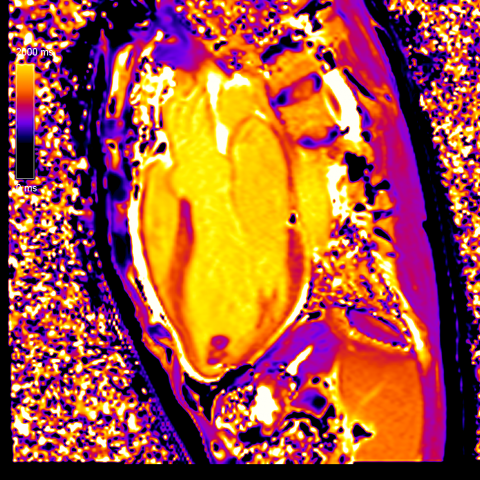 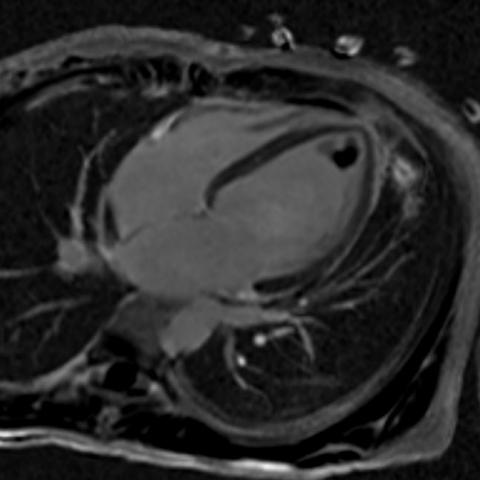 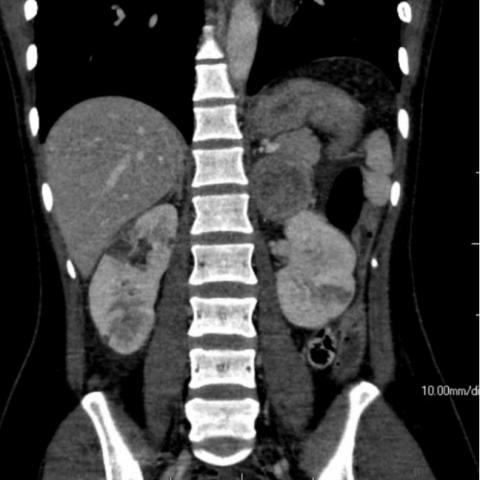 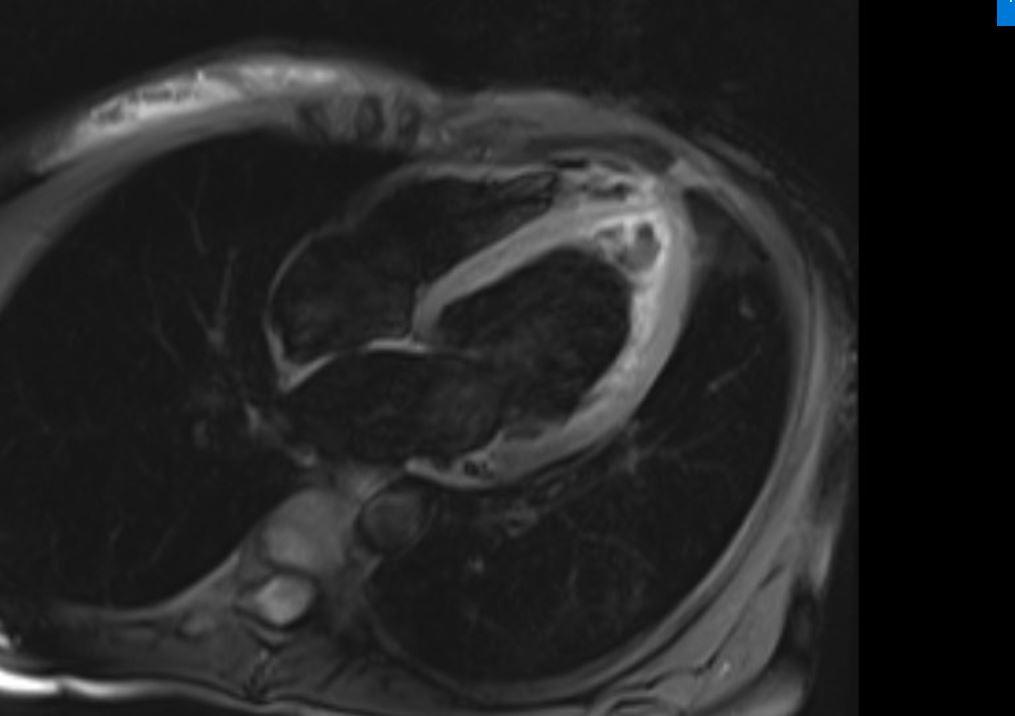 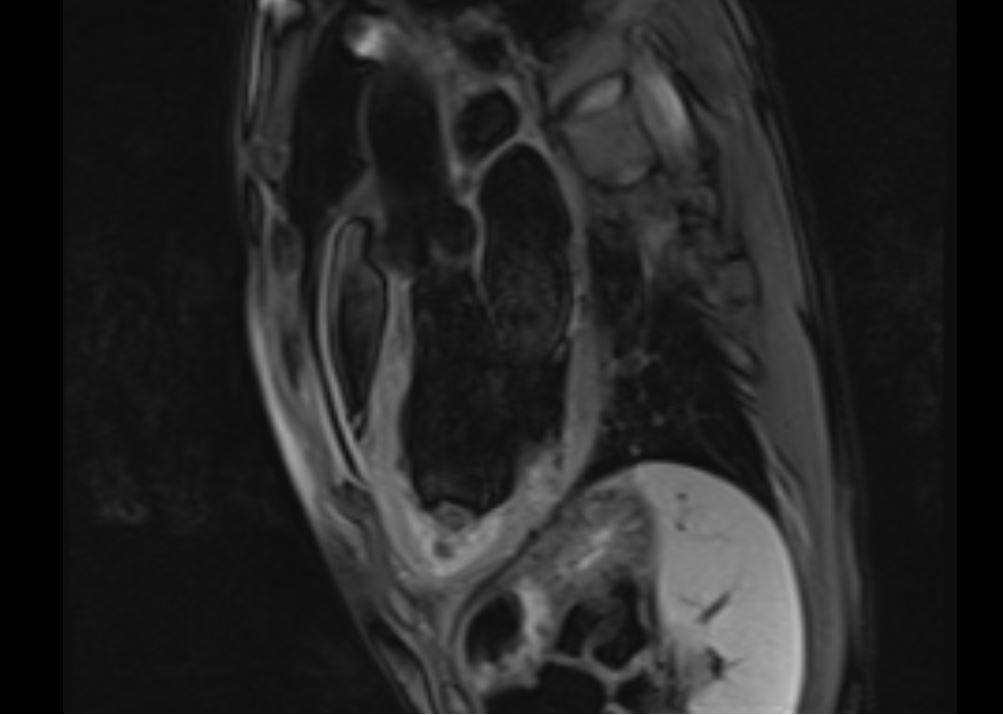 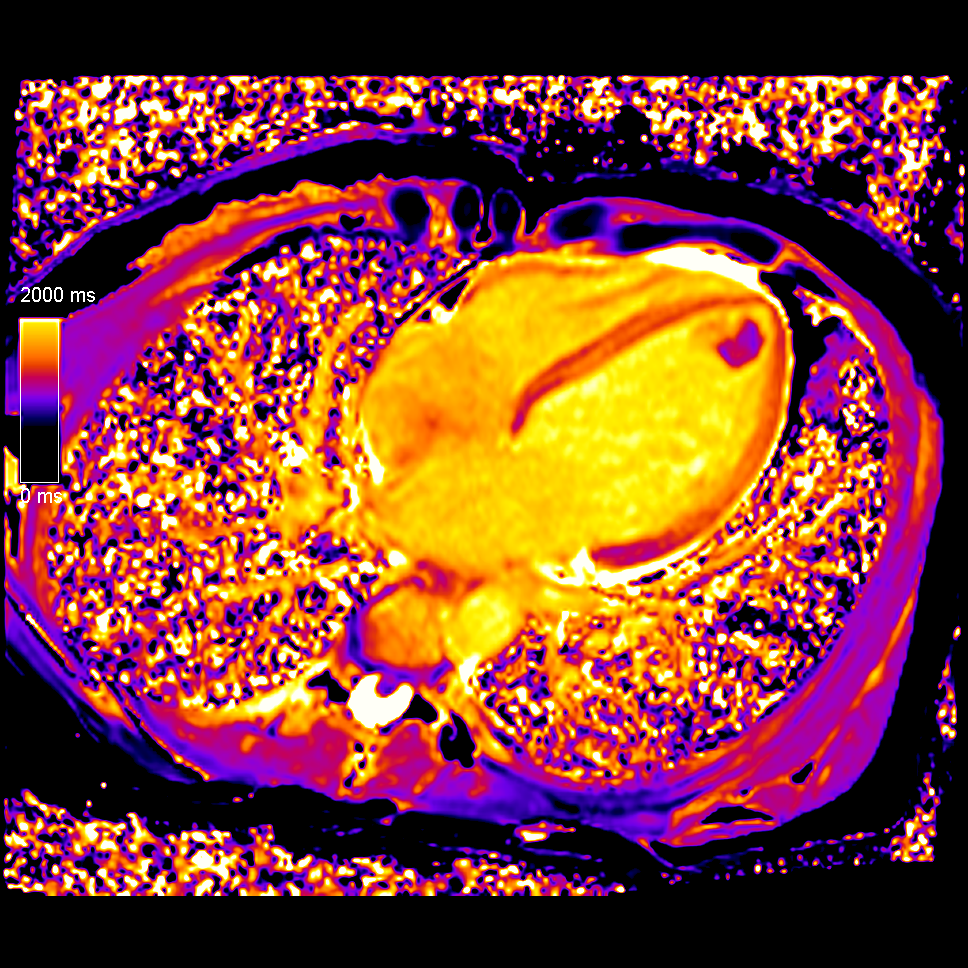 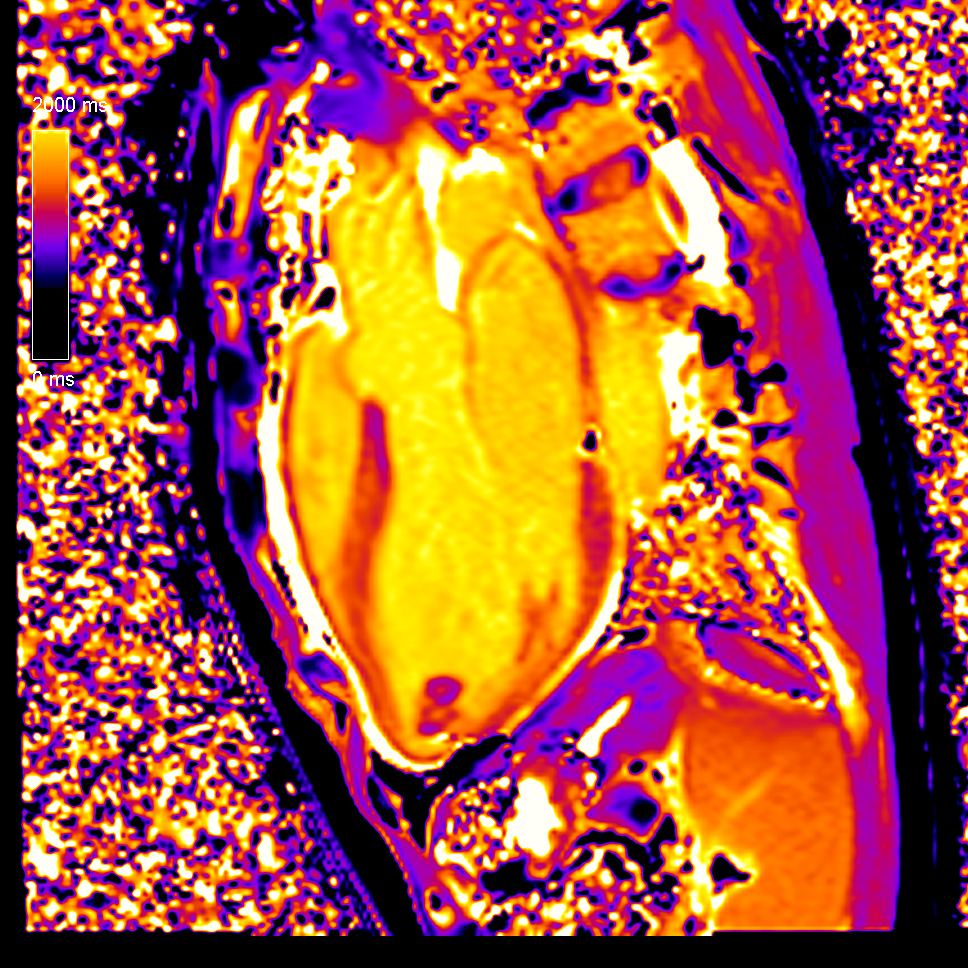 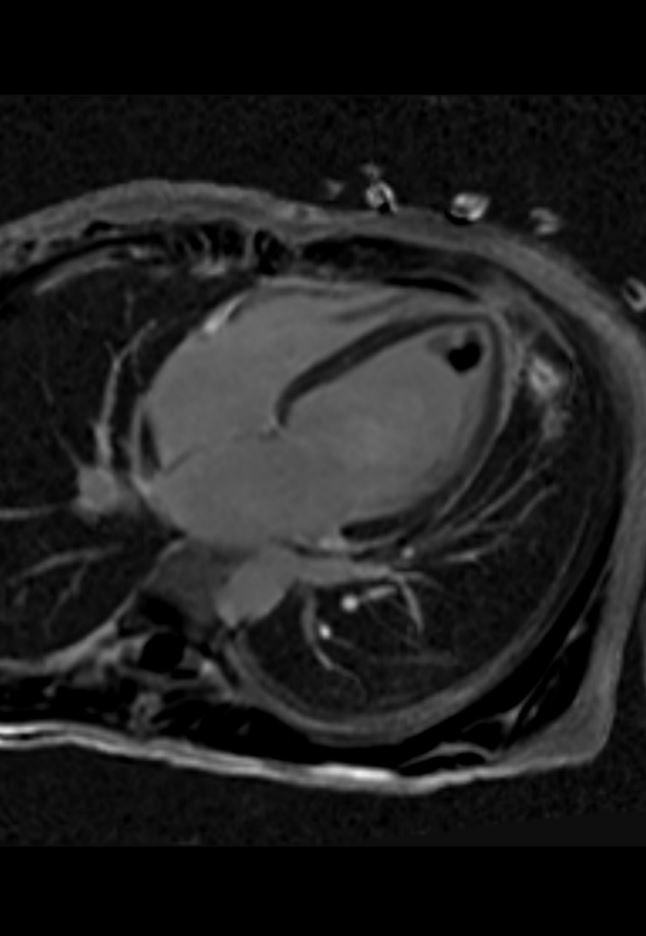 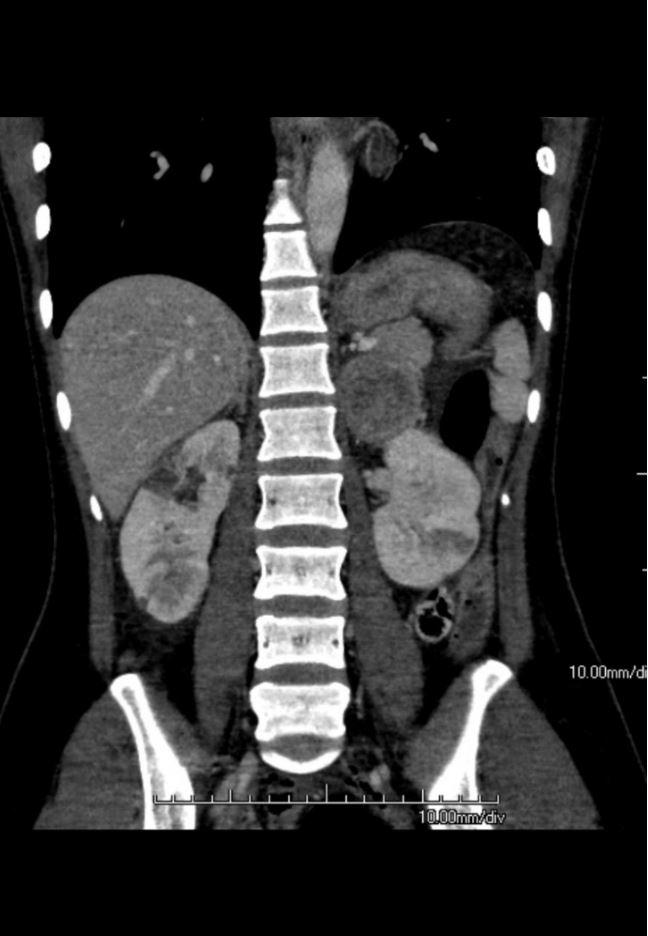