A contrast-enhanced abdominal CT with hydro-CT technique, in order to distend the stomach, was performed and confirmed the presence of a 3,3 x 2,6 cm solid mass arising from the gastric fundus, with a polypoid aspect and a possible exophytic component (Fig. 2). The lesion showed homogeneous contrast-enhancement in the equilibrium phase.

The patient also underwent a barium swallow examination of the upper GI tract, which showed a 3 cm filling defect in the gastric fundus, with regular and smooth margins (Fig. 3).

PET/CT scan with 18F-FDG was performed and demonstrated a moderate accumulation at the gastric fundus wall (maximum SUV = 3.6) – (Fig. 4).

Upper gastrointestinal endoscopy confirmed the presence in the gastric fundus of a submucosal bulging (Fig. 5). Pathology and immunohistochemistry of the mass revealed a S-100 positive tumor, suggestive of gastric schwannoma.

The patient underwent a surgical wedge resection of the greater curvature; the postoperative course was uneventful.

Gastrointestinal schwannomas are benign slow-growing mesenchymal tumors, which take origin from the myenteric plexus within the wall of gastrointestinal tract. [1-4]

Gastric schwannoma (GS) clinical presentation is nonspecific: it can present with abdominal pain, or with obstructive symptoms in case of large masses, or less frequently with upper gastrointestinal bleeding. However, the majority of GSs are asymptomatic incidentally detected on imaging studies [1,5]. The most frequent site of GSs is the gastric body; they can have an intramural, exophytic or mixed growth pattern. [1,2,5,6]

Radiological features of GS are not specific, so that preoperative diagnosis is often difficult. On unenhanced CT, GS usually appears as a round, well-defined mass, characterized by a low and homogeneous attenuation. On contrast-enhanced CT, GS shows a progressive homogeneous enhancement pattern, with peak during the equilibrium phase. The homogeneous attenuation and enhancement of GS reflect the lack of degenerative changes such as necrosis, hemorrhage, calcification or cystic changes. [1,5-7]

These characteristics may help in differentiating GS from gastrointestinal stromal tumor (GIST). In fact, GISTs often appear heterogeneous on both unenhanced and contrast-enhanced CT scans, because of the presence of degenerative changes. In addition, GISTs show a marked enhancement during the arterial phase, in contrast with schwannomas’ delayed enhancement pattern. [1,2,5-7]

Other differential diagnosis of a GS are the gastric lymphoma and the leiomyoma. [2,5,7]

The main presentation of gastric lymphoma is a focal thickening of the gastric wall, but it can also present as a homogeneous mass arising in the wall of the stomach, similarly to GS. However, gastric lymphoma is frequently accompanied by lymphadenopathy in mesenteries and retroperitoneum, while GS may present with reactive perilesional adenopathy. [2,6,8]

The CT appearance of leiomyomas is similar to schwannomas as they are homogenous hypoattenuated masses, with mild to moderate enhancement on contrast CT. The main differences are the site and the growth pattern, in fact gastric leiomyomas are almost always located at the cardia of the stomach and present an endoluminal growth pattern. [5,7,8]

The definitive diagnosis of GS is based on histopathologic and immunohistochemical analysis. Schwannomas show positive staining for S-100 and negative for typical GISTs’ markers like CD34, CD117, DOG-1, desmin and SMA. [1,4,5,7]

Surgical resection is considered the treatment of choice, and the prognosis of GS after surgery is excellent. [1,6-8] 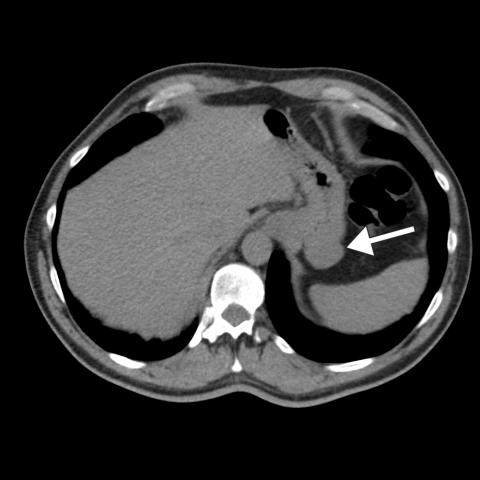 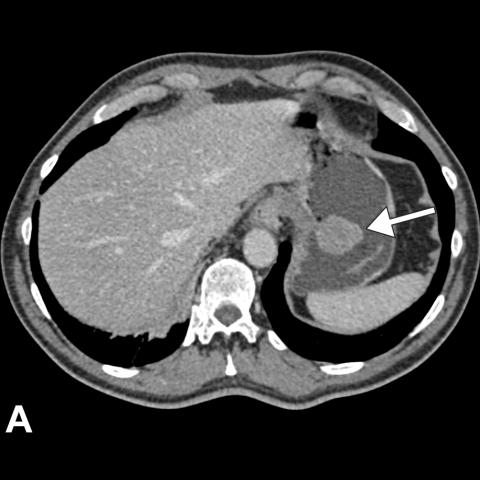 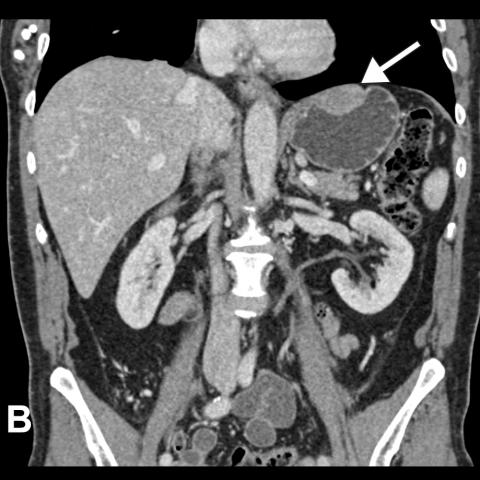 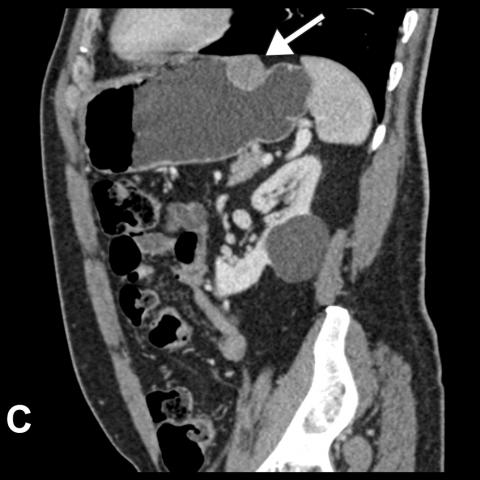 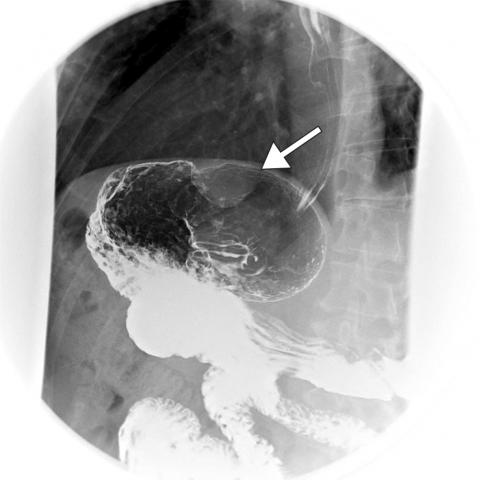 Barium swallow examination of the upper GI tract shows a filling defect in the gastric fundus, with regular and smooth margins (arrow).
Figure 4 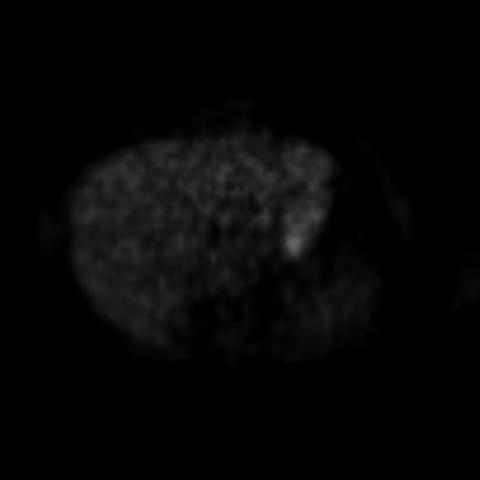 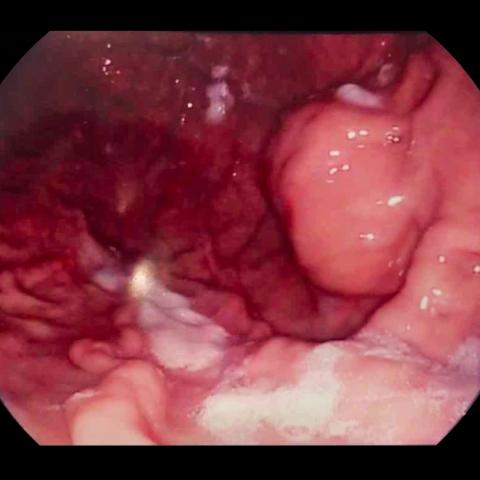 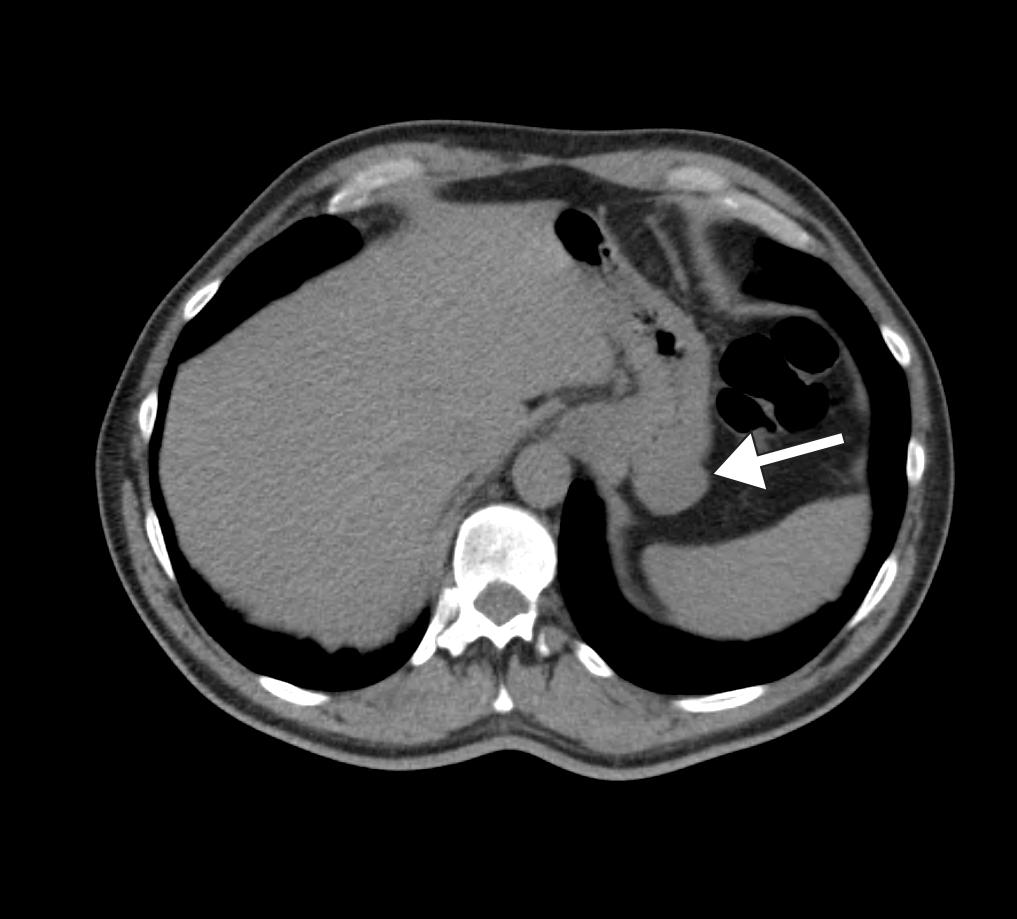 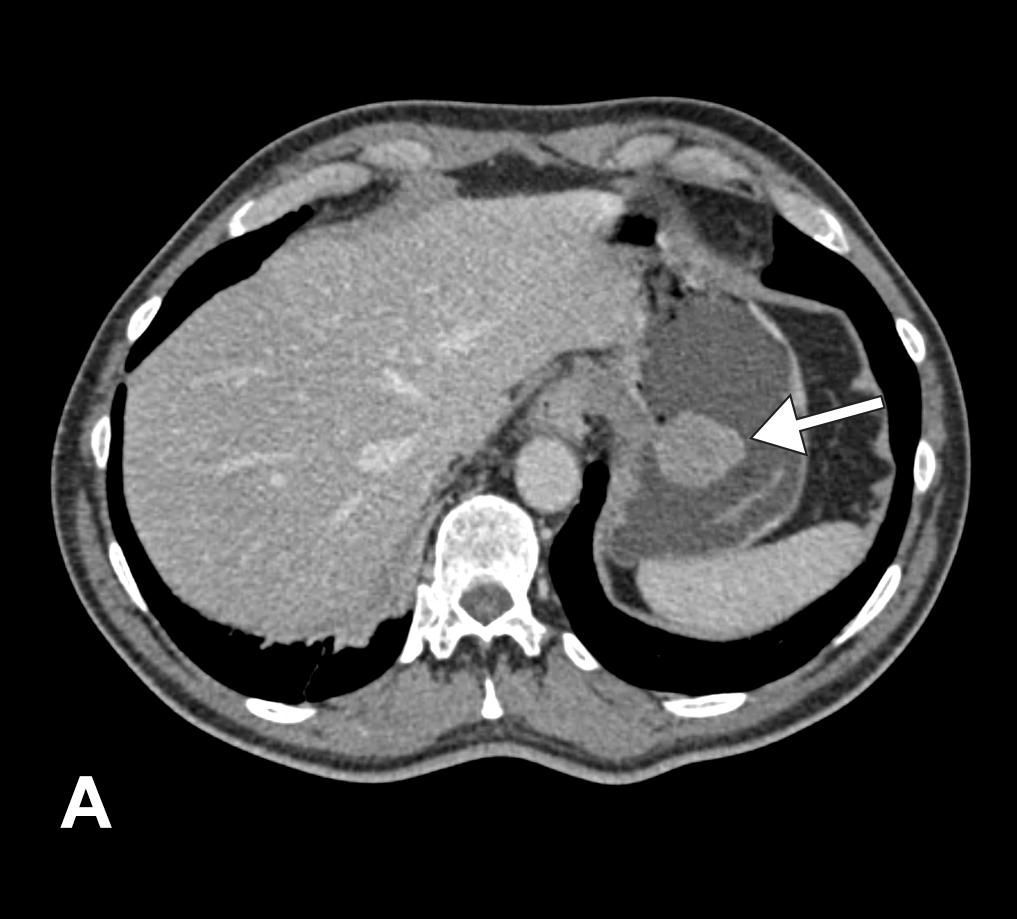 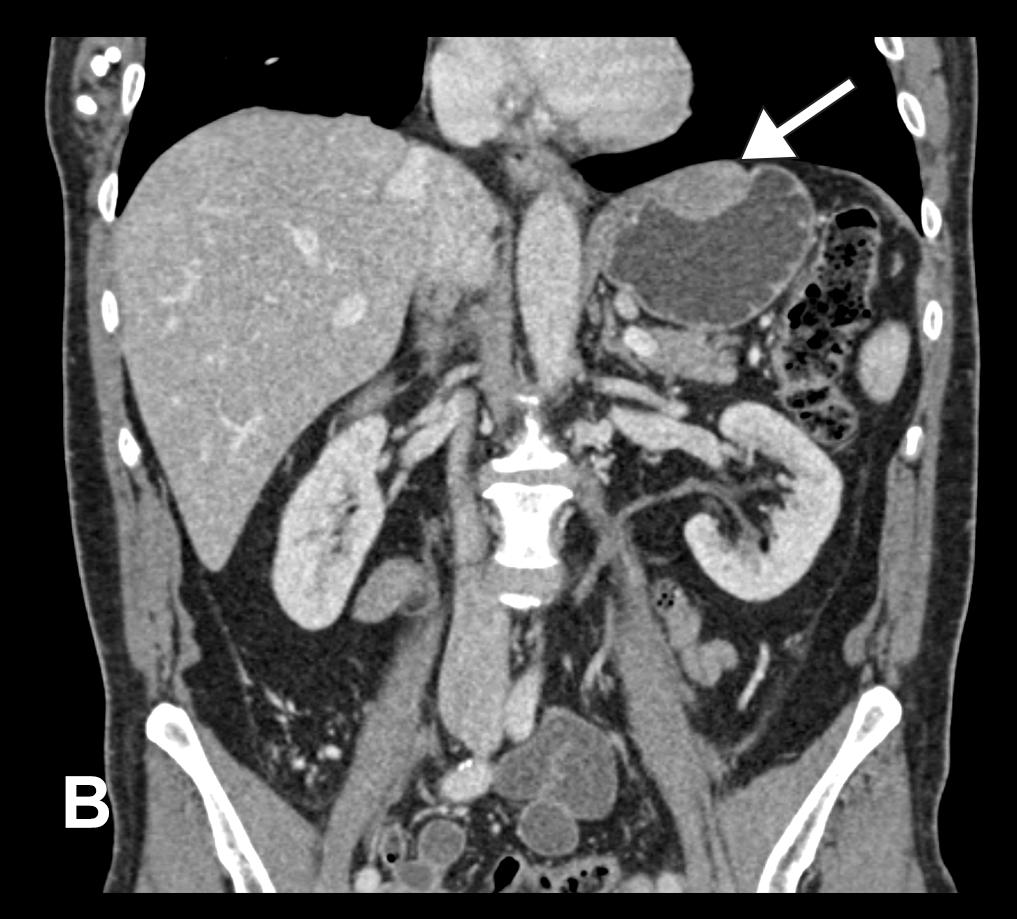 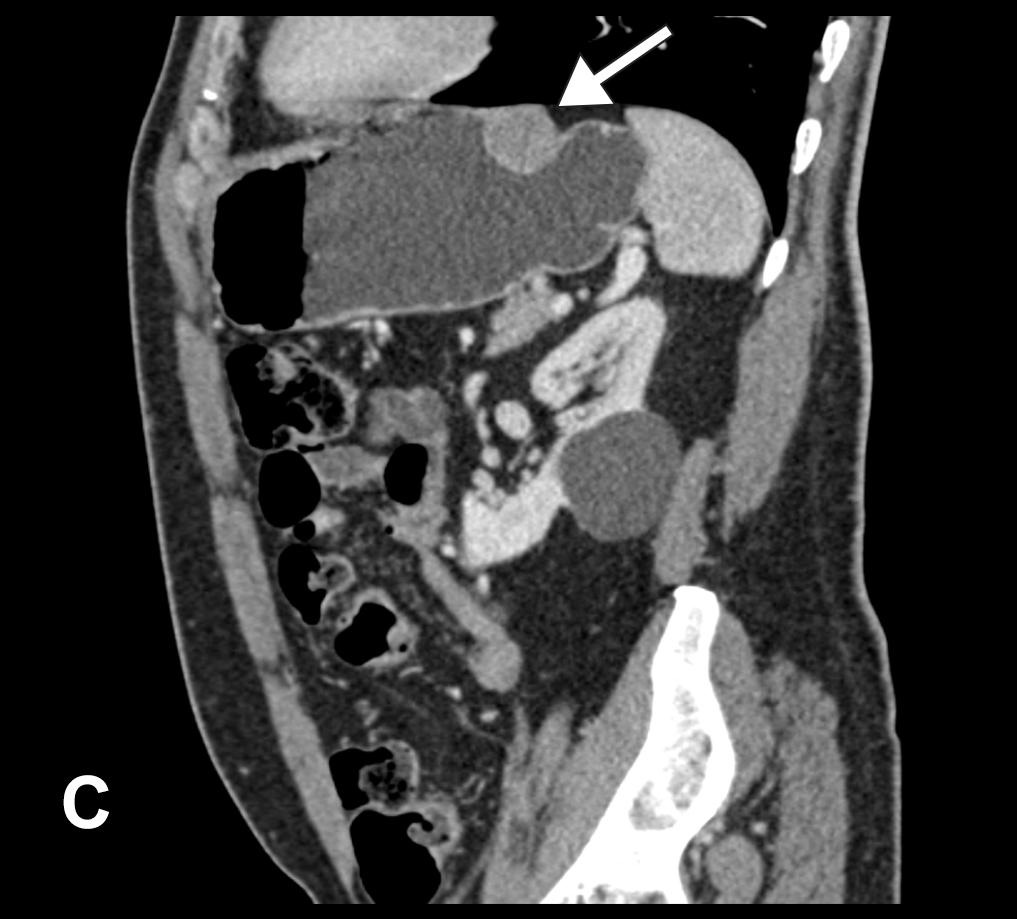 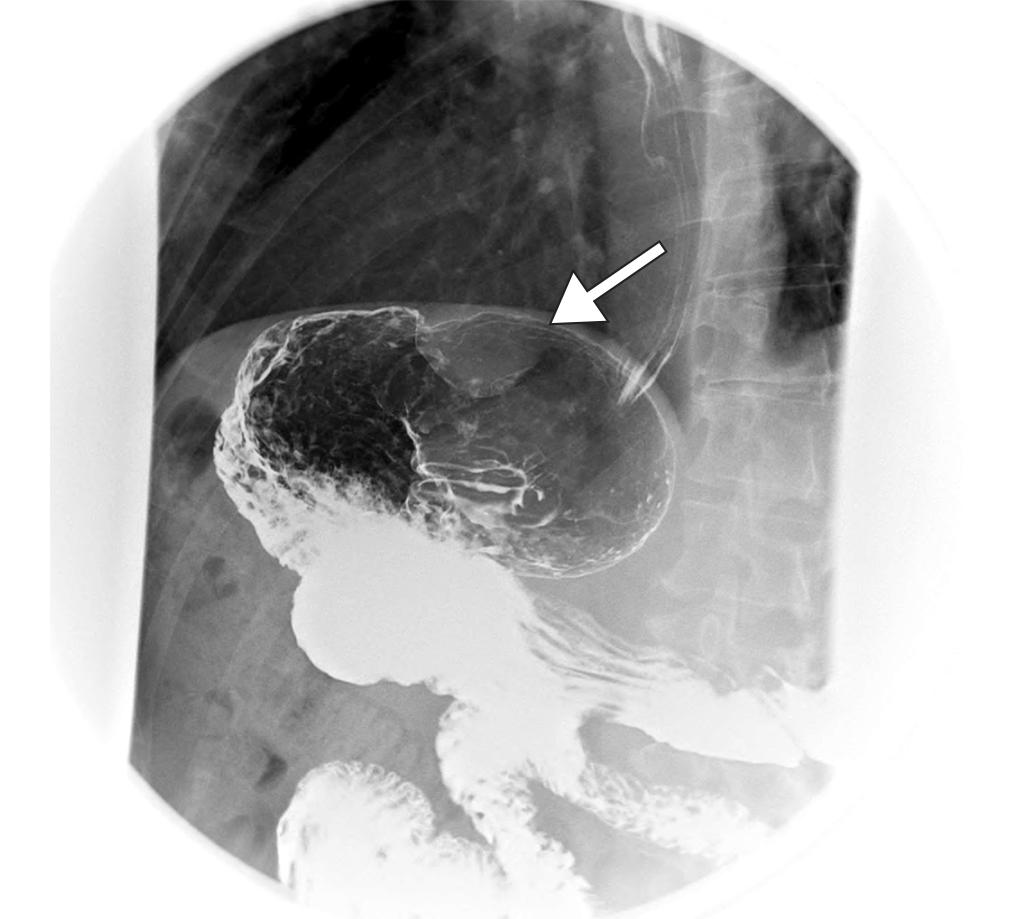 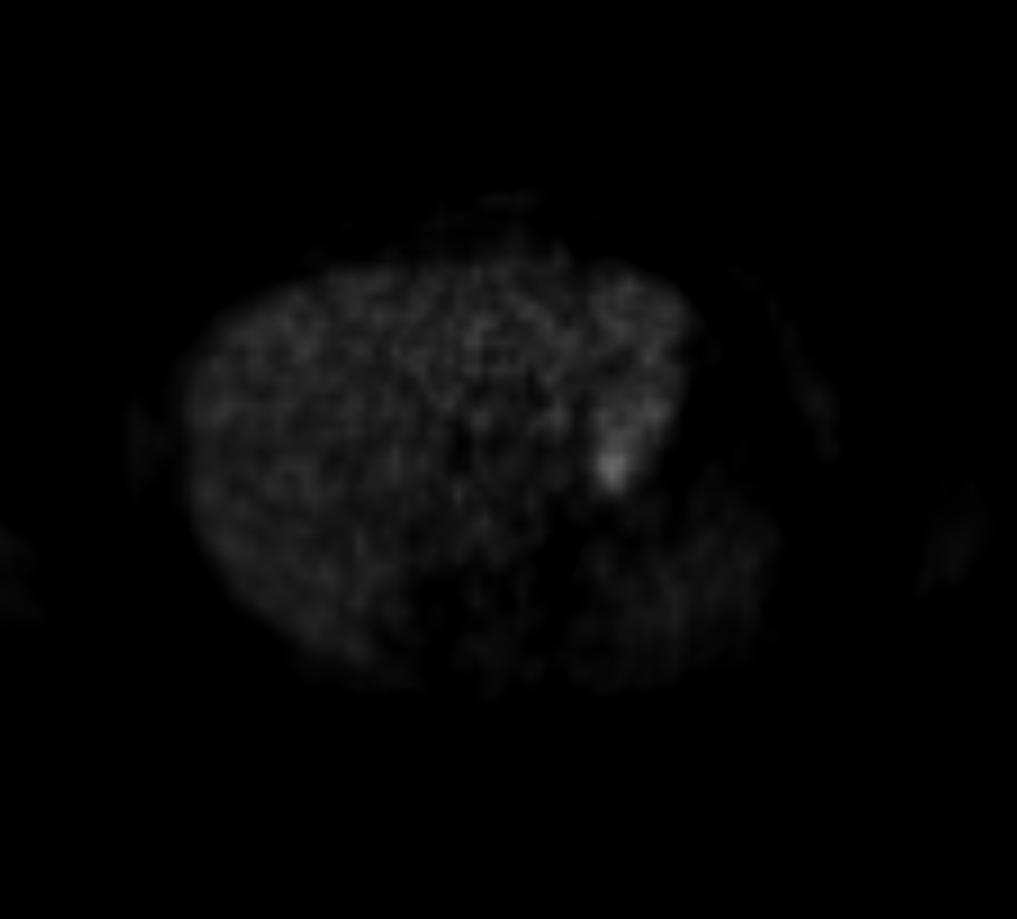 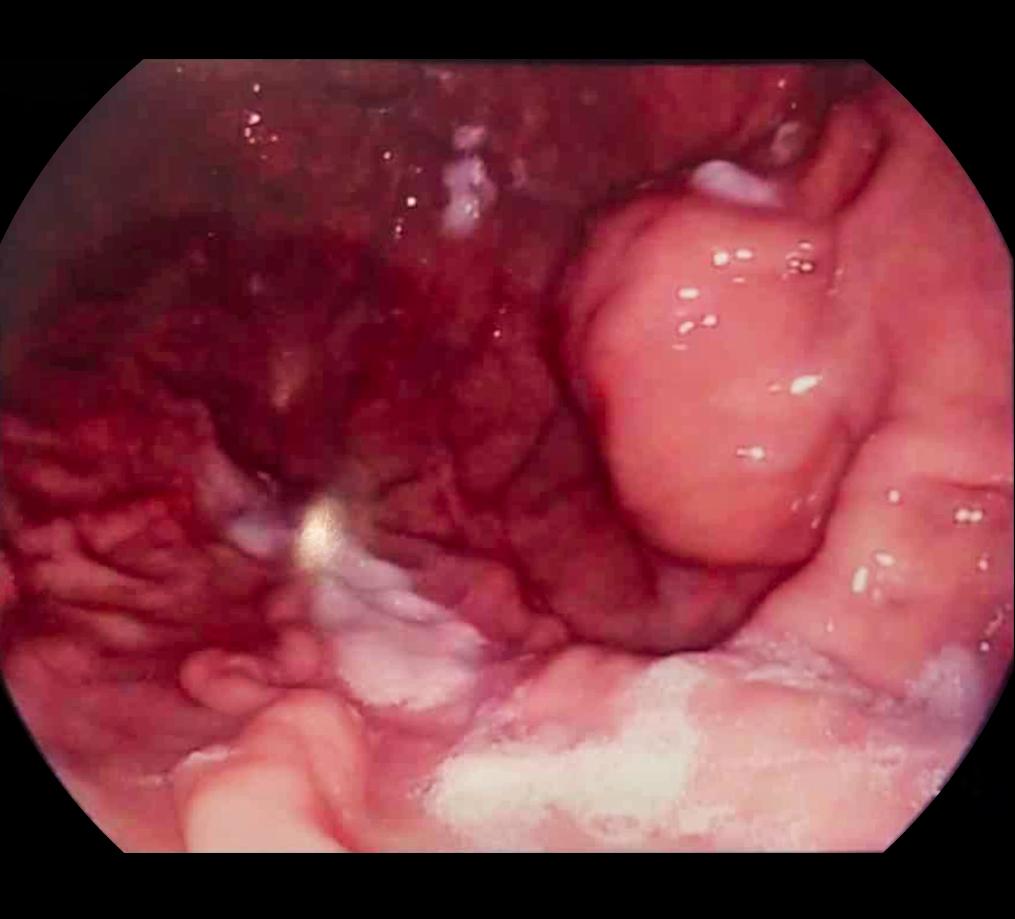