47-year-old male patient, admitted to the emergency department with diffused abdominal pain for one week, anorexia and weight loss. No fever. During physical examination he presented with a tender and depressible abdomen, nasogastric tube with enteric drainage, and normal inflammatory markers. Supine abdominal X-ray and Computed Tomography (CT) scan were performed.

CT scan before and after intravenous administration of iodinated contrast depicted distended small bowel loops, mainly affecting the ileum for up to 10 cm from the ileocaecal valve, where there was an abrupt calibre transition zone due to a stenosis. The ileum distal to the stenosis presented with thickened walls. (Fig. 2)

Segmental resection of the distal ileum and transverse-enterostomy were performed. The histology revealed a fibroinflammatory process of the mesentery, consistent with sclerosing mesenteritis. The patient started therapy with corticosteroids.

Follow-up CT 2 months after surgery depicted maintained distension of several ileal loops due to multifocal stenosis and a heterogeneous densification of the mesentery, with an increased space between the bowel loops, mainly in the right abdominal quadrants (Fig. 3). There was also a superior mesenteric artery fat ring sign. The colic arteries were patent. (Fig. 4)

Bone evaluation showed syndesmophytes in the lumbar spine and bilateral sacroiliitis with ankylosis of the left sacroiliac joint. (Fig. 5)

It is more common in men (2:1), presenting in the 7th decade, usually with abdominal pain, bloating, weight loss, nausea and a palpable abdominal mass (50% of the cases). [1, 2]

Several associations have been proposed, namely autoimmunity, and some cases of ankylosing spondylitis have been reported. Other associations include surgery, trauma, vasculitis, infection or malignancy. [1, 2]

Three pathophysiological stages of the disease have been proposed: first, a macrophageal layer replaces mesenteric adipose tissue (mesenteric lipodystrophy), that leads to the second stage, with proliferation of plasma and polymorphonuclear inflammatory cells (mesenteric paniculitis), and eventually nodular mass retraction due to fibrosis and fat necrosis, the end stage (MS).

Imaging can vary depending on the stage. The inflammatory response leads to a densification of the mesentery fat – the “misty mesentery”. It is not specific and can also occur with other conditions. [3]

The differential diagnosis includes lymphoedema (not common in the absence of intraperitoneal free fluid) or haemorrhage (improbable in the absence of hyperattenuating free fluid). Inflammatory conditions, such as pancreatitis, may mimic MS with mesentery densification, but not mass forming. [3, 4]

The most challenging differentiation is with neoplasia, since both share some imaging findings:

-          Calcification, a common feature of MS, usually presenting in the centre of the lesion, reflecting a sequela of fat tissue necrosis. It is helpful to exclude lymphoma (unless previously treated), but not to exclude other neoplasias, since it is also seen in adenocarcinomas and in 70% of carcinoid tumours.

-         “Fat ring sign”, reported in 50% of MS patients, representing healthy adipose tissue surrounding a vessel encased by the MS mass; it can also be seen with mesenteric lymphomas.

-          Distribution of nodules in the root of the mesentery, a typical feature of MS, can be helpful in the differentiation with carcinomatosis and mesothelioma that usually have a wider range of distribution.

MS with an underlying inflammatory pathophysiology can be treated with immunosuppressive agents, so prompt recognition is important. Histopathological characterisation should be done to exclude underlying neoplasms. Complications, such as stenosis and intestinal obstruction, may need surgical intervention.

Prognosis depends on the response to medical and surgical treatment, some having a benign course, and other a dismal prognosis. 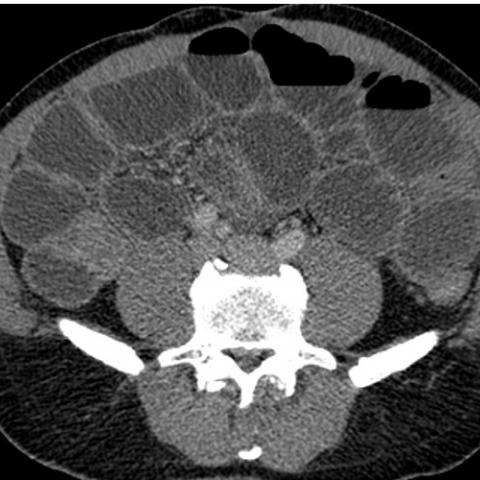 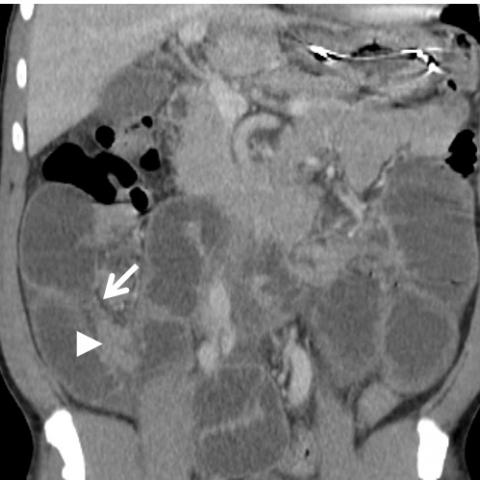 CT reconstruction at the coronal plane depicting the distended ileal bowel loops due to a stenosis (arrow). The ileum distal do the stenosis presents with thickened walls (arrowed).
Figure 3 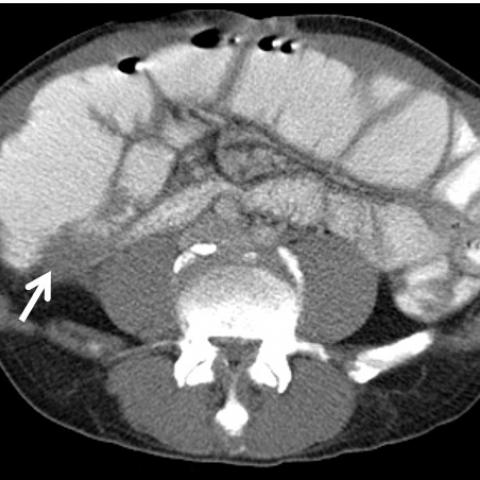 Axial CT reconstruction after iv and oral contrast administration, depicts distended bowel loops due and an ileal stenosis (arrowhead), caused by a densification of the mesentery involving the ileon (arrow). 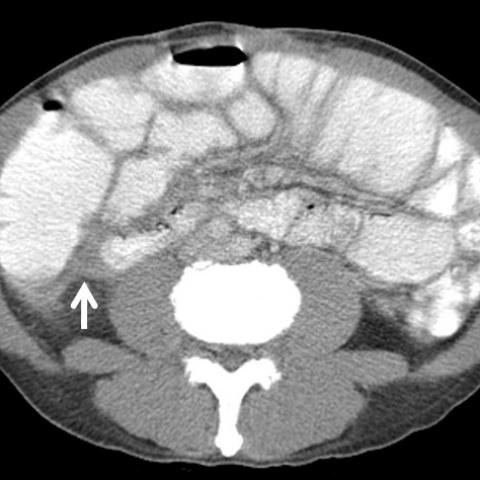 Axial CT reconstruction after iv and oral contrast administration, reveals a densification of the mesentery extending through the paracolic gutter (arrows). 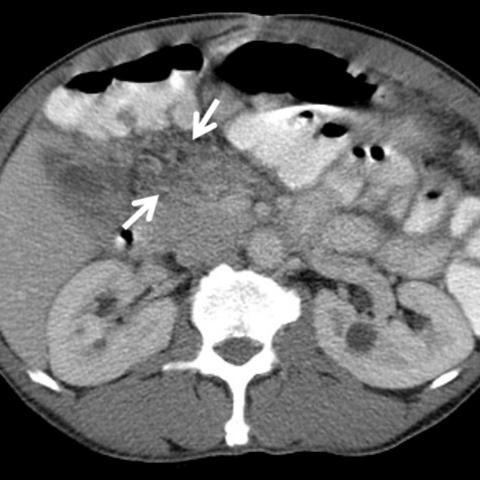 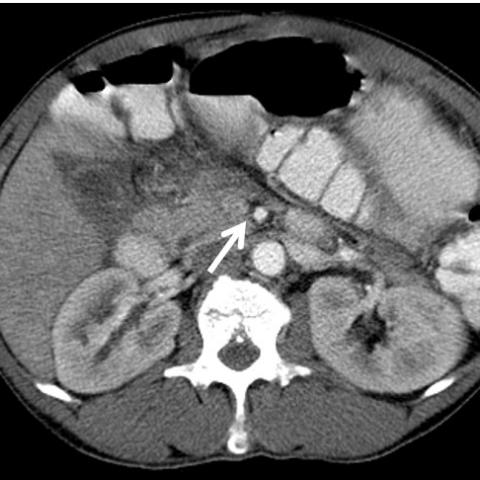 Axial CT reconstruction after iv and oral contrast administration, depicts the preservation of the fat around the superior mesenteric artery (arrow) – “fat ring sign”. Additional findings included some fluid near the gallbladder. 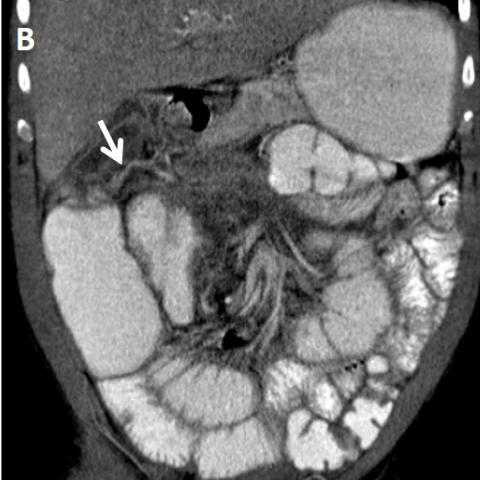 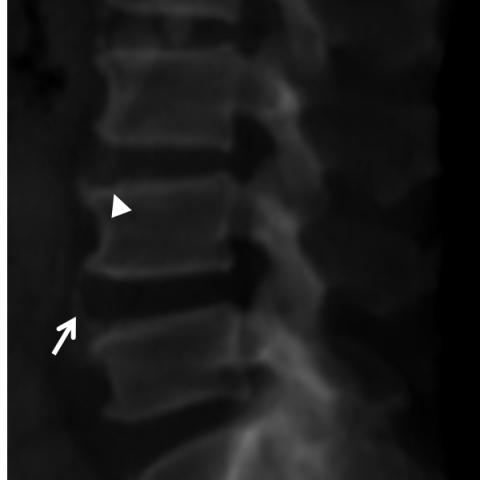 CT reconstructions at the sagittal plane, depicting calcification at the periphery of the annulus fibrosus (arrow) and erosion of the vertebral endplates (arrowhead), due to early AS alterations. 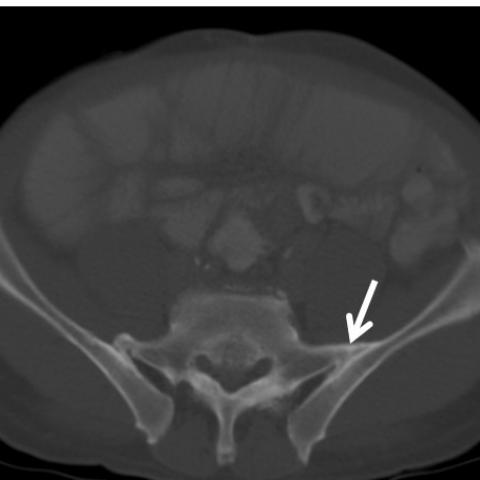 CT reconstruction, bone window, at the axial plane showing bilateral alterations of the sacroiliac joints, with ankylosis on the left (arrow). 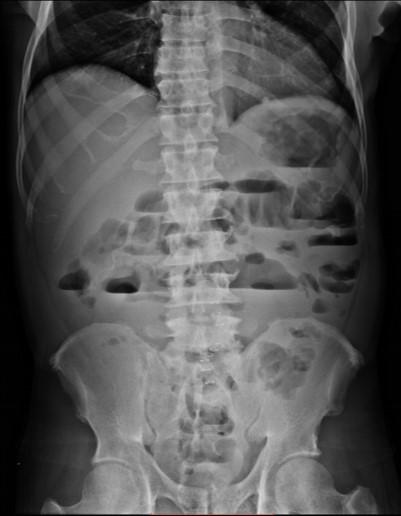 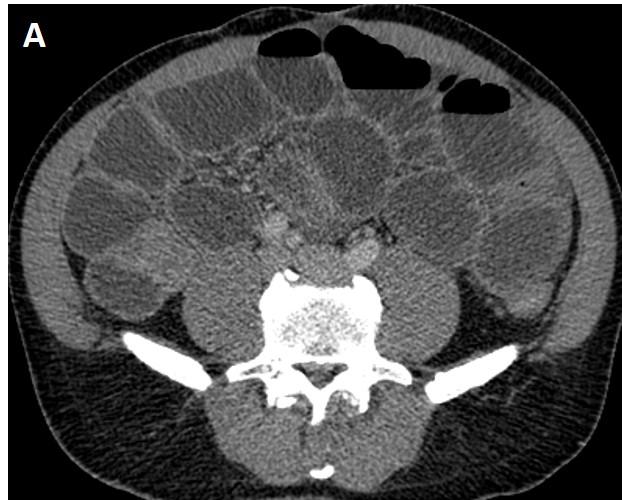 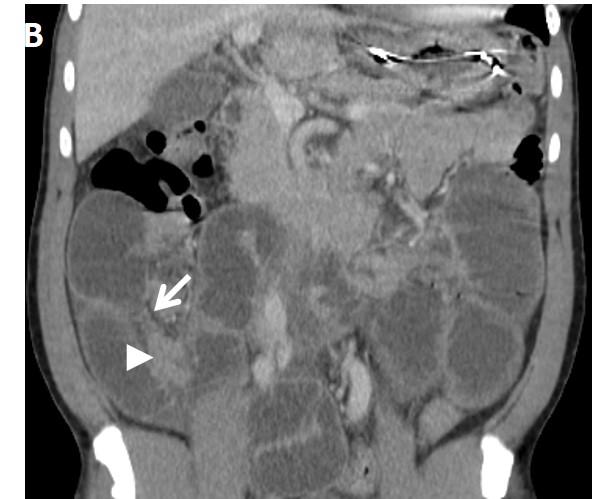 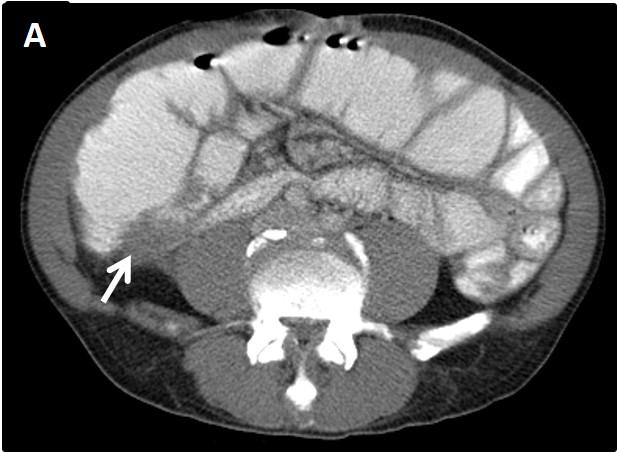 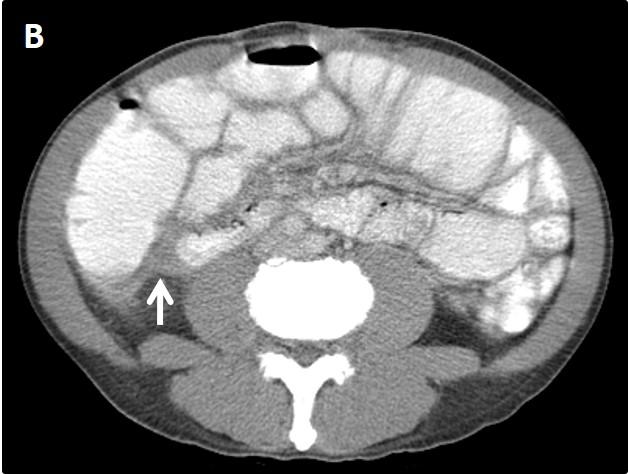 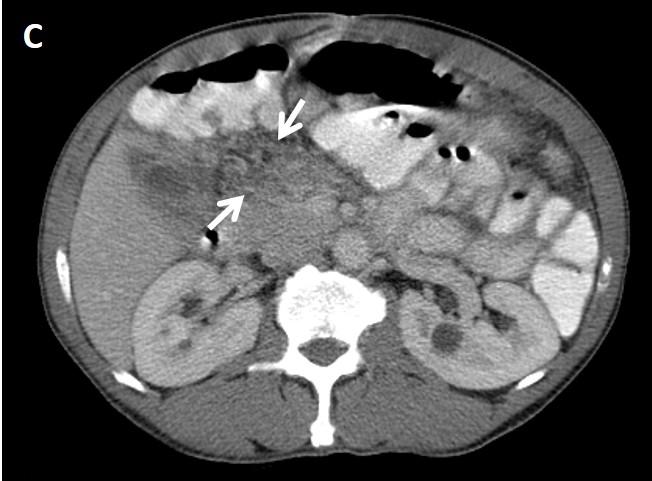 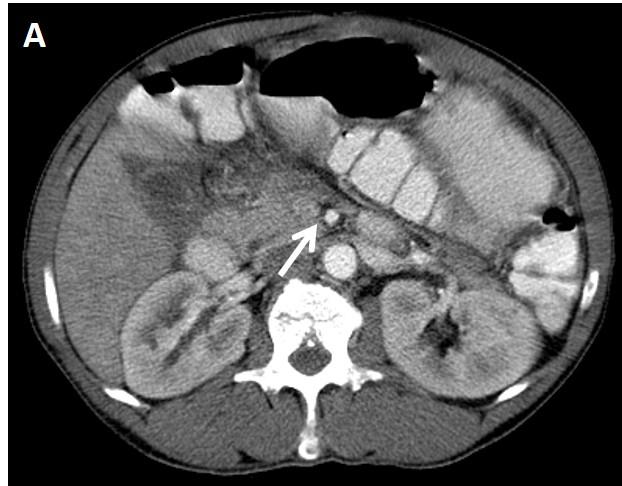 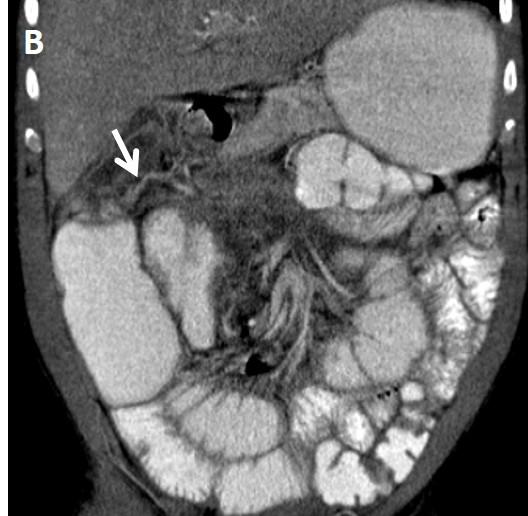 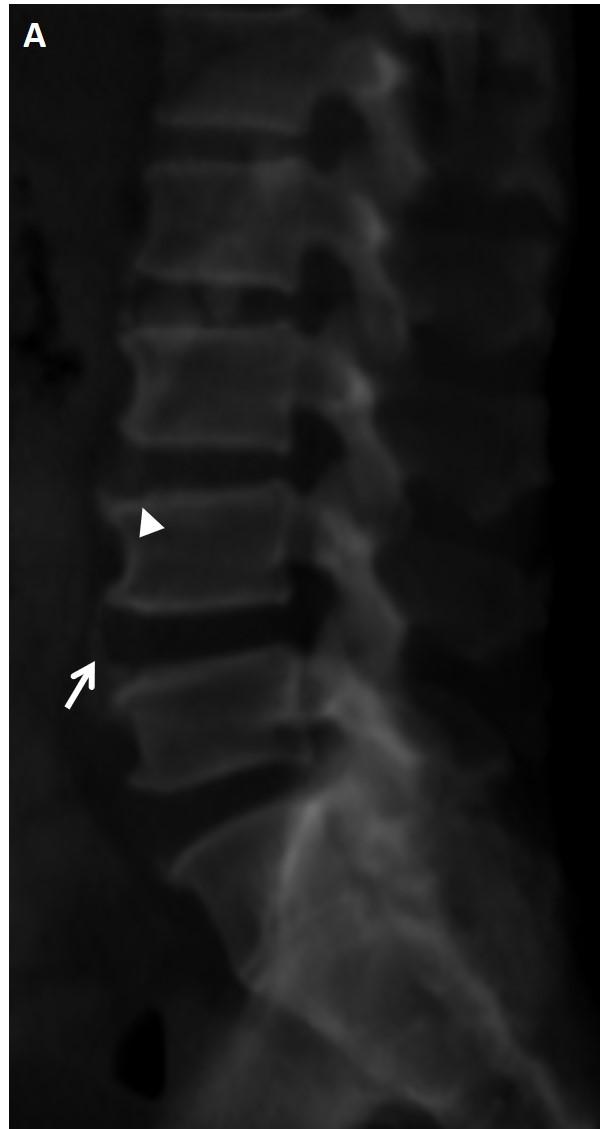 CT reconstructions at the sagittal plane, depicting calcification at the periphery of the annulus fibrosus (arrow) and erosion of the vertebral endplates (arrowhead), due to early AS alterations.
© Department of Radiology, Centro Hospitalar Universitário de Lisboa Central, Lisbon, 2018 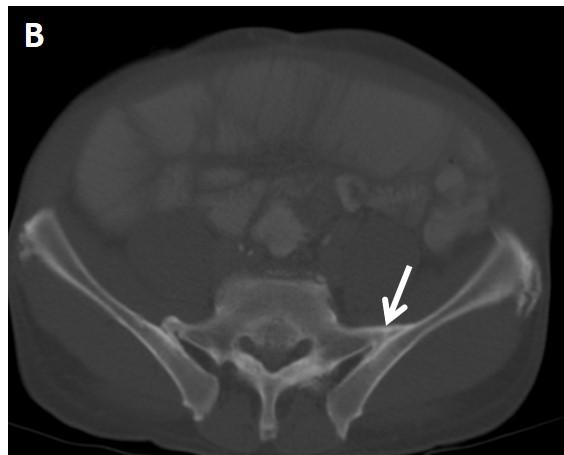