Intussusception secondary to a lipoma

An 81-year-old female patient without any relevant previous medical background was admitted to the Emergency Room after a 10-day lasting medical history of vomits, oral intolerance and abdominal pain associated with diarrhoea in the last 48 hours.

At the terminal ending of the intussusceptum a well-rounded mass with fat attenuation density was detected (Fig. 1, 4, 5 and 6 yellow star).

These findings were compatible with ileocolic intussusception due to a terminal ileum lipoma, with the appearance of target sign in sagittal view (Fig. 2) and pseudokidney/sausage-shaped mass sign in transversal view (Fig. 3).

Intestinal intussusception accounts for 1% of all bowel obstructions in adults, and it is defined as the invagination of a segment of bowel with its mesenteric fold (intussusceptum) into an adjacent intestinal segment (intussuscipiens). The pathophysiology is still unclear, but it has been associated with dysrhythmic contractions and facilitated by the traction of a lead-point mass [1, 2].

Diagnosing intussusception in adults based on clinical presentation alone is challenging due to the overlap of symptoms with other diseases. The predominant symptoms in adults are those related to the bowel obstruction, but symptoms can also arouse from the own mass in cases of malignancy [3].

Intestinal lipomas are mainly asymptomatic until they are presented as an intussusception [1].

Abdominal plain X-ray is usually not useful for the detection of intussusception but can play an important role in screening complications such as intestinal obstruction and pneumoperitoneum [2]. While ultrasound is the gold standard technique for diagnosing intussusception in children, CT is the most sensitive technique in adults.

CT findings of ileocolic intussusception include target and sausage-shaped sign, which consists of a concentric hyperdense double ring; distended colon with thickened wall (intussuscipiens) that contains in its lumen a segment of ileum along with a layer of mesenteric fat and vessels (intussusceptum) [2, 4].  Additionally, oedema and air can be found in the bowel wall in case of complication such as ischaemia, necrosis or gangrene [2].

Lipoma typically appears as a well-defined mass with homogeneous fat attenuation. 90% of them are located in the submucosa of the terminal ileum and colon and can be sessile or pedunculated [1].

MRI is not commonly used in the diagnosis of intussusception, but its sensitivity may be similar to CT with an enterography protocol [2].

The patient underwent emergency surgery that confirmed ileocolic intussusception, with the presence of a rounded mass (yellow star, Fig. 7), which was then confirmed to be a lipoma in the pathology examination. 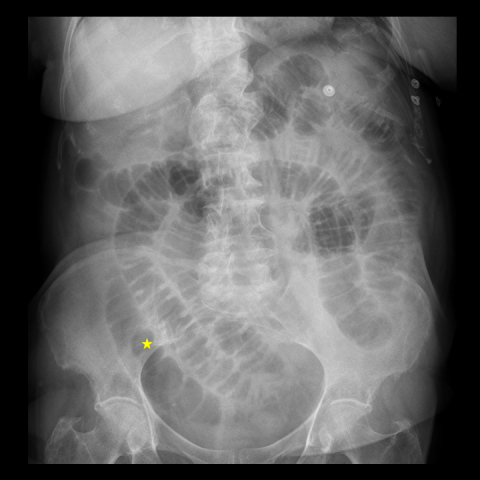 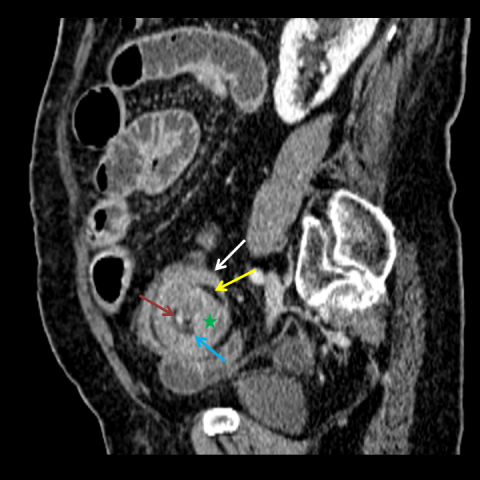 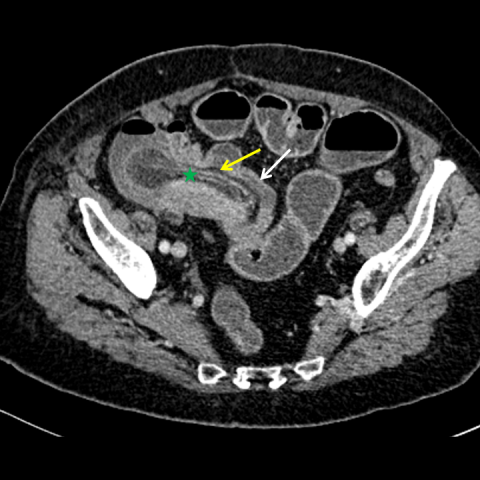 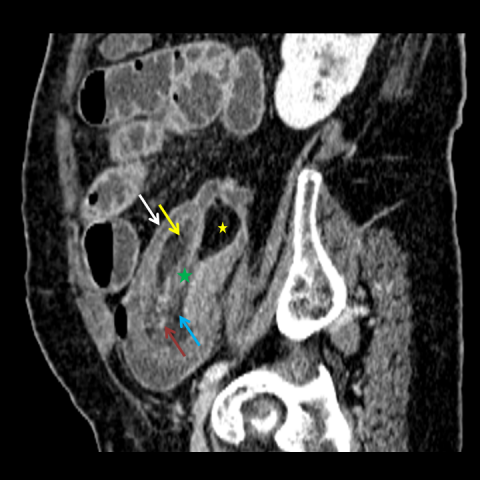 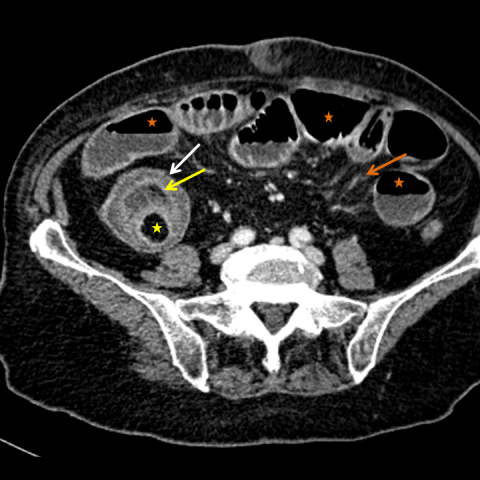 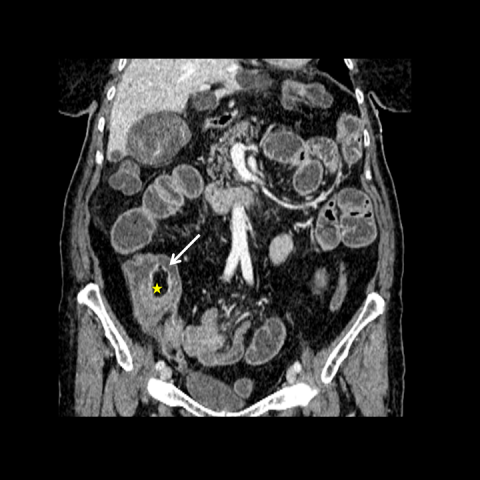 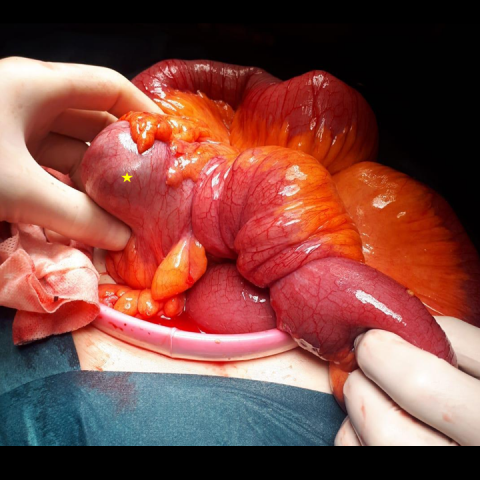 Surgical picture with the ileocolic intussusception. 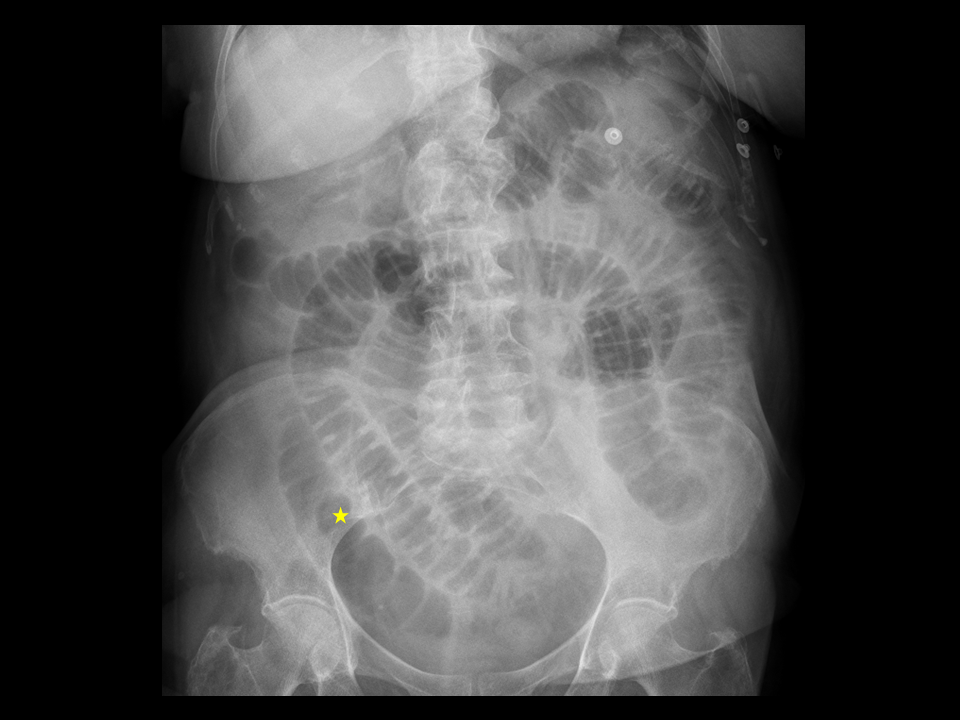 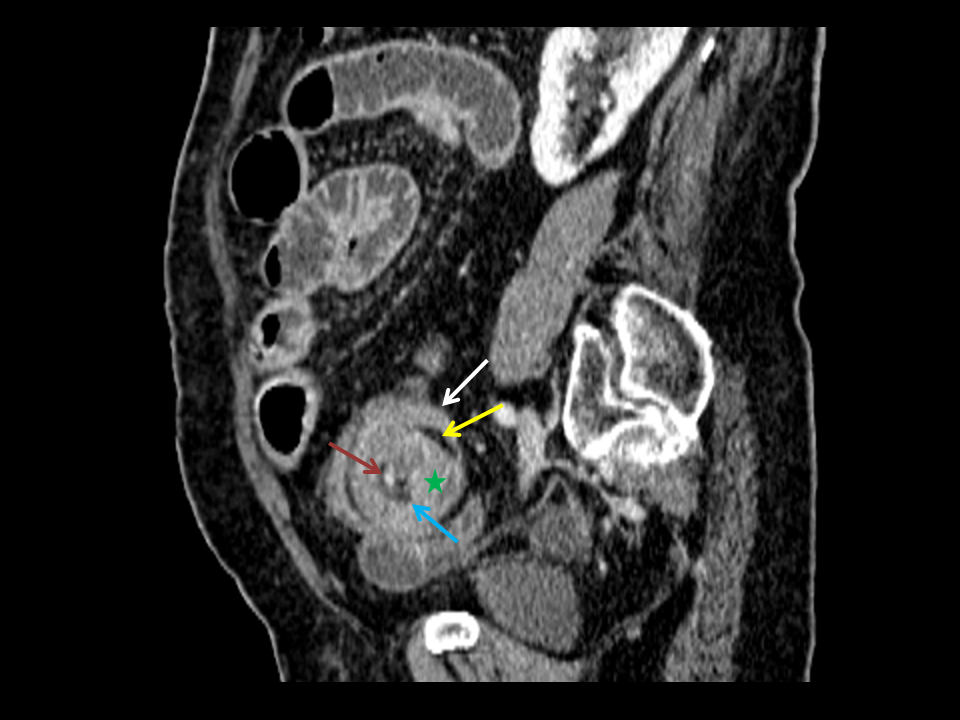 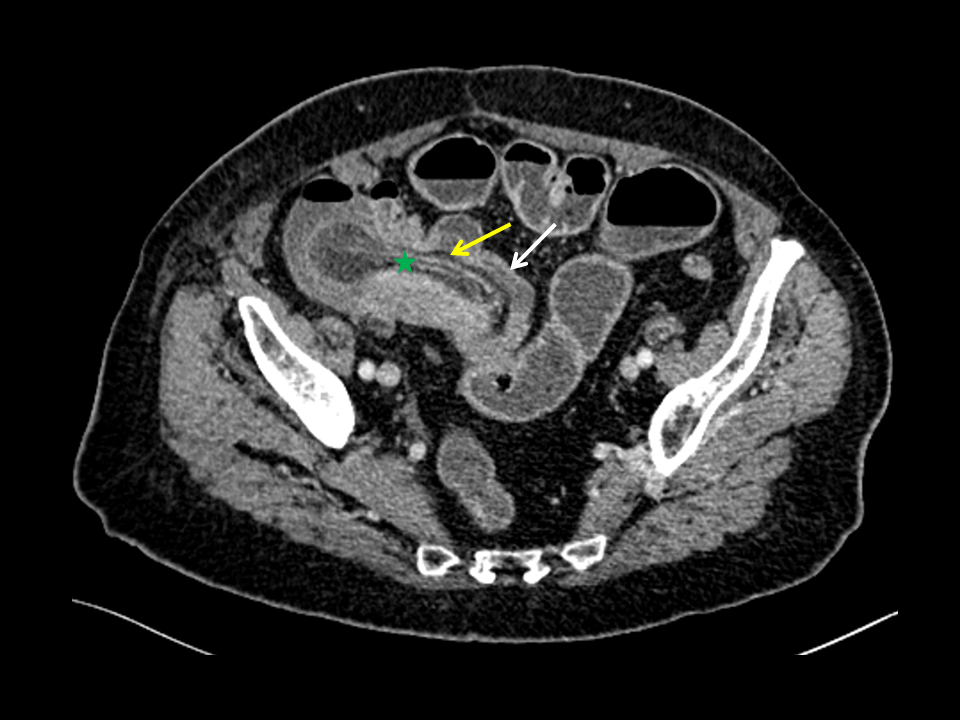 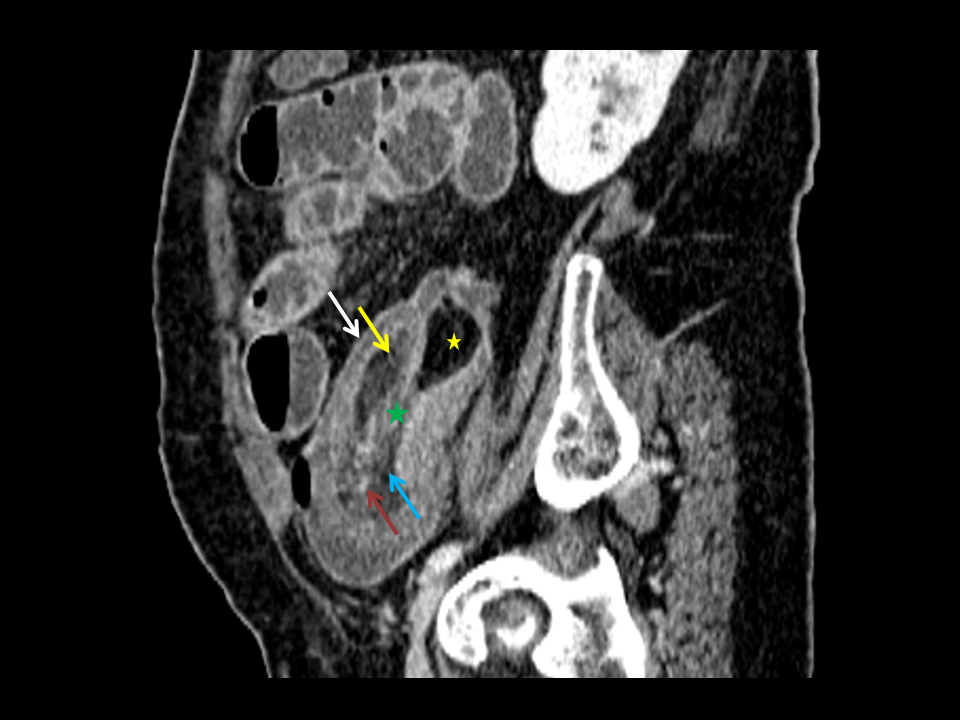 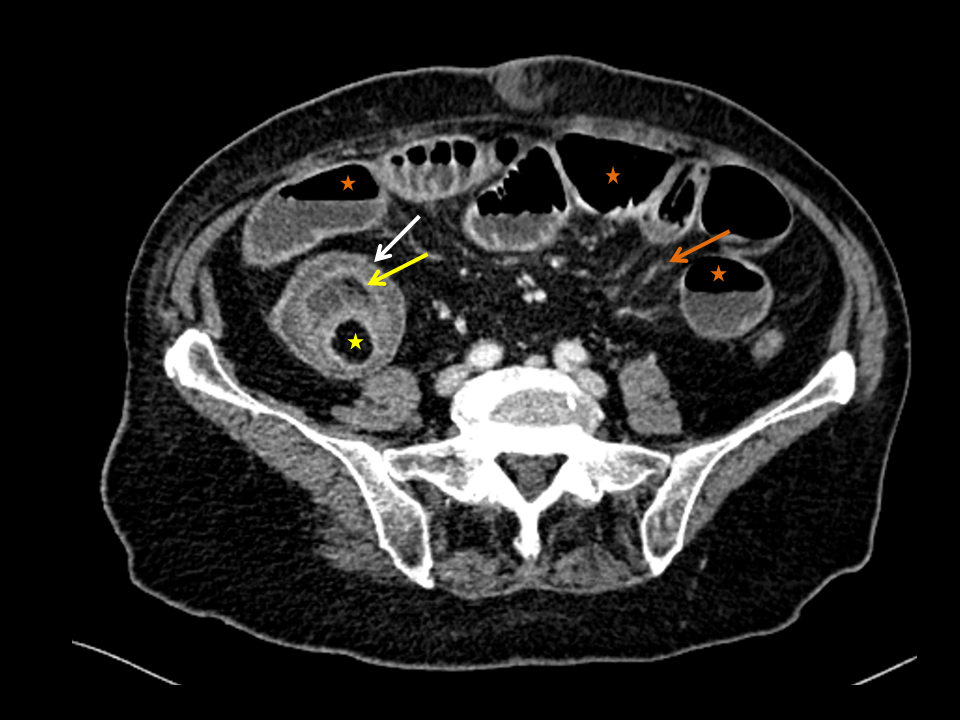 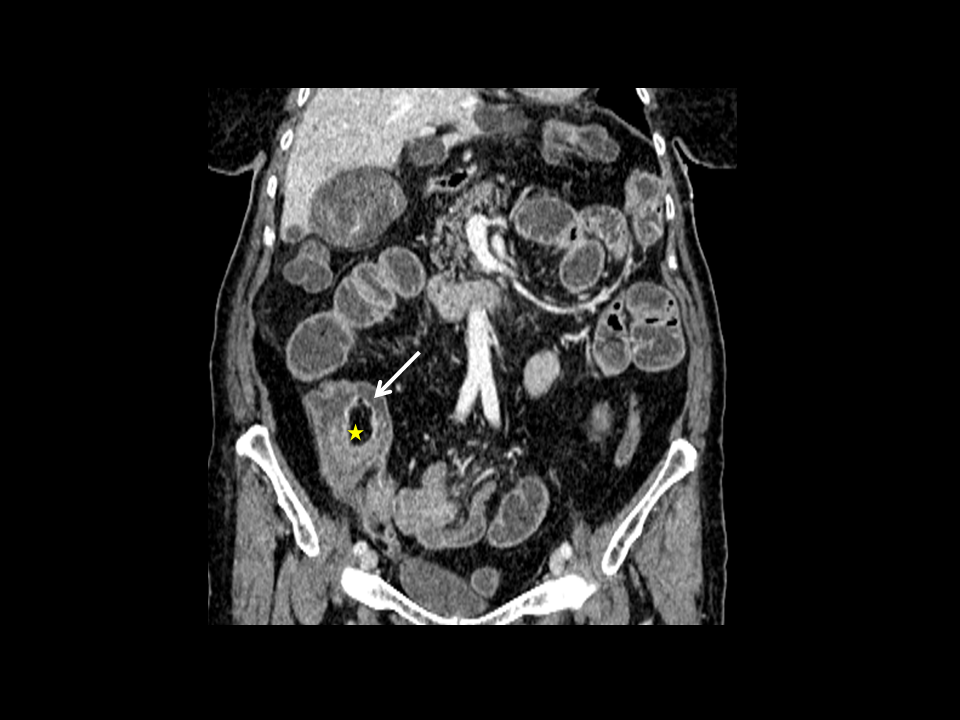 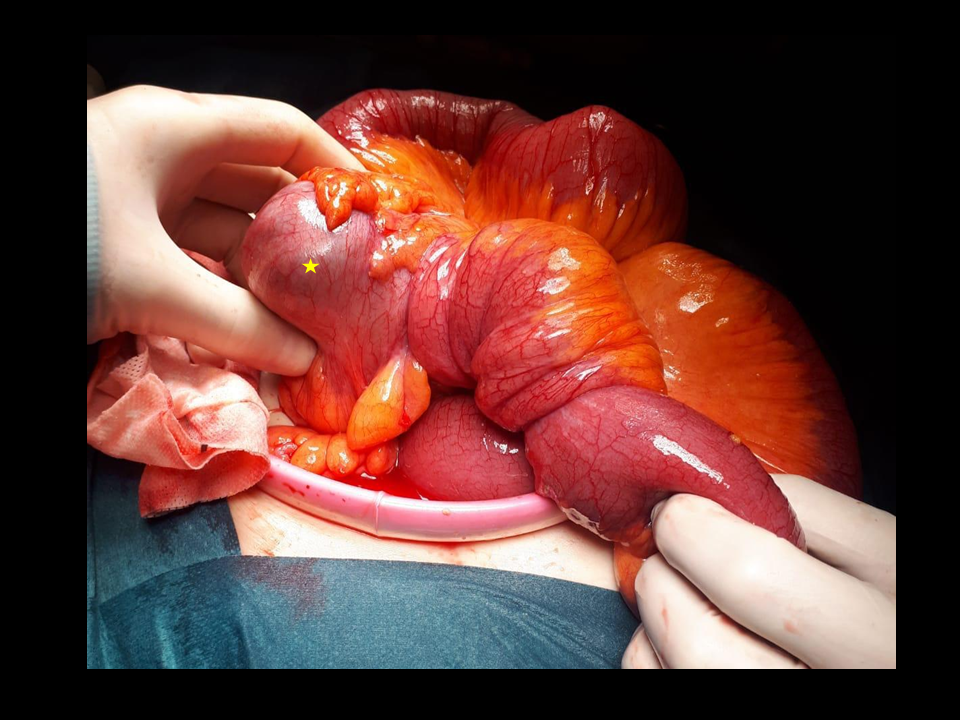