A 70-year-old male patient presented with sudden-onset left-sided weakness and slurring of speech. He was a known hypertensive, with good baseline functional capacity and no prior history of cerebrovascular accident. He underwent non-enhanced cranial CT for initial evaluation.

Extensive calcific plaques were seen in the intracranial segments of the internal carotid arteries, as well as the basilar artery. An anastomotic vessel, likewise heavily lined by calcific plaques, was noted arising from the proximal cavernous segment of the right internal carotid artery (Fig. 2a). It coursed posteriorly into the prepontine cistern, and communicated with the basilar artery (Fig. 2b).

The trigeminal artery is one of the embryonic anastomoses between the carotid and the vertebrobasilar systems. These anastomoses arise early during the 5 to 6 mm stage of embryonic development. The embryonic hindbrain is supplied by a pair of longitudinal neural arteries, which in turn are supplied by the carotid system through these primitive anastomoses. As the paired longitudinal neural arteries fuse to form the basilar artery, these vessels regress, typically at the 14 mm embryo stage [1, 2]. Persistence of any of these anastomoses may occur, and the persistent trigeminal artery [PTA] is the most common, accounting for 85% of cases [1].

The PTA connects the cavernous segment of the internal carotid artery and the basilar artery. It has a reported incidence of 0.2%, although actual incidence may be higher due to undiagnosed cases [1]. PTA is mostly asymptomatic, and patients usually undergo imaging for other clinical concerns. In some cases, patients present with symptoms of cerebrovascular insufficiency, especially in the setting of atherosclerosis due to altered haemodynamics [3]. Cases presenting cranial nerve disorders, such as trigeminal neuralgia and oculomotor paresis, have also been reported, possibly due to the close anatomic relationship of PTA with the nerves [2, 3]. Other associations include intracranial aneurysms, arteriovenous malformation, carotid-cavernous fistula, and moyamoya disease [2, 4].

In the current case, PTA was diagnosed as an incidental finding during non-enhanced CT of a patient suspected of acute stroke. The vessel was heavily lined by calcific plaques, rendering it visible even on non-enhanced scan. In most other cases, diagnosis is achieved through the use of angiographic studies [4, 5]. These studies provide excellent demonstration of the vessel, along with its relationship to the internal carotid and vertebrobasilar arteries, and allow detection of other vascular anomalies.

PTA itself typically does not require treatment. However, coexisting vascular malformations or aneurysms have to be addressed accordingly, either through surgery or endovascular techniques [2, 4]. Using the endovascular approach, the PTA may even serve as a way of accessing the posterior circulation from the internal carotid artery, especially when the vertebral or basilar arteries are hypoplastic or inaccessible [2]. Knowledge of its presence also alerts neurosurgeons of the hazards in manipulating the cavernous region, due to the risk of vascular injury and related morbidities [5].

In conclusion, the PTA is usually diagnosed as an incidental finding during imaging, although its knowledge may be helpful in endovascular or surgical planning for treatment of other pathologies. 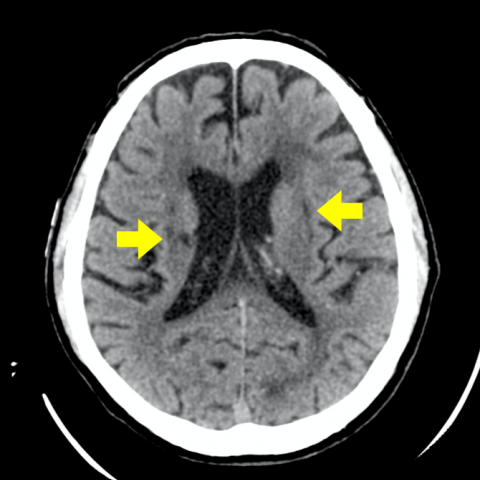 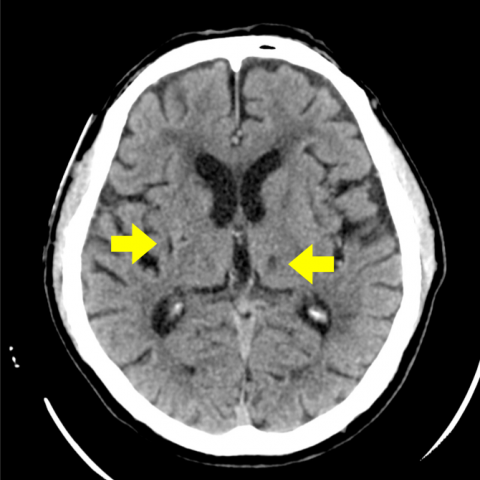 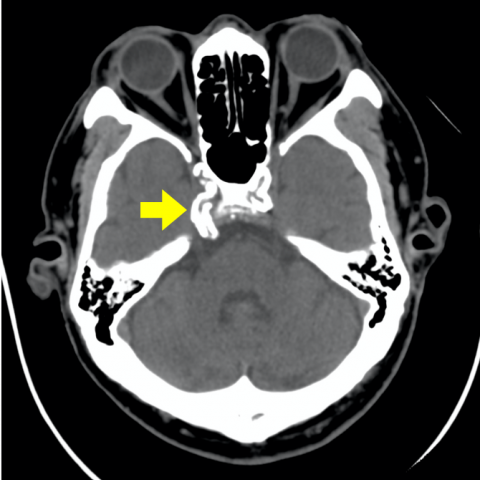 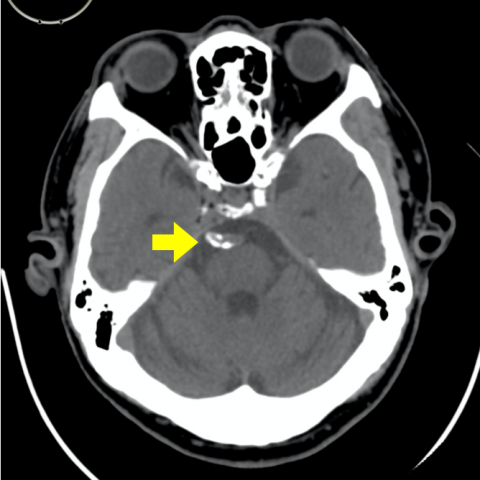 Axial non-enhanced CT shows the vessel coursing within the prepontine cistern to communicate with the basilar artery (arrow). 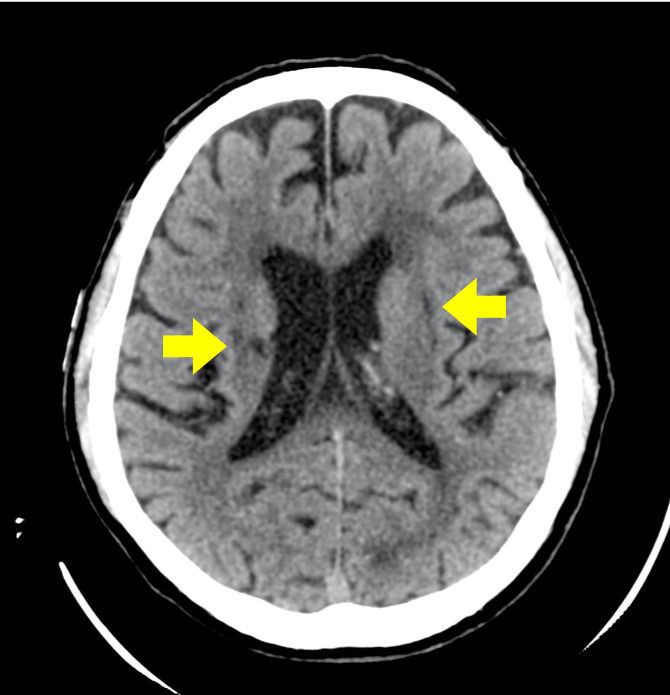 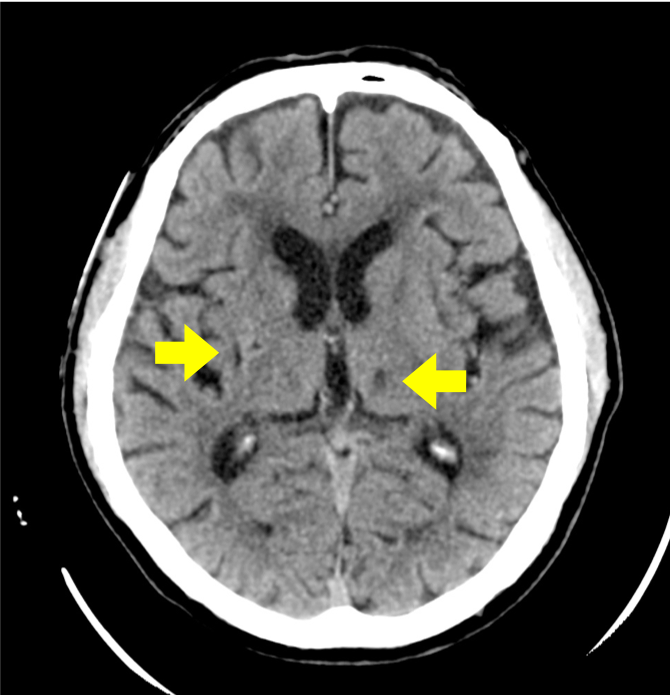 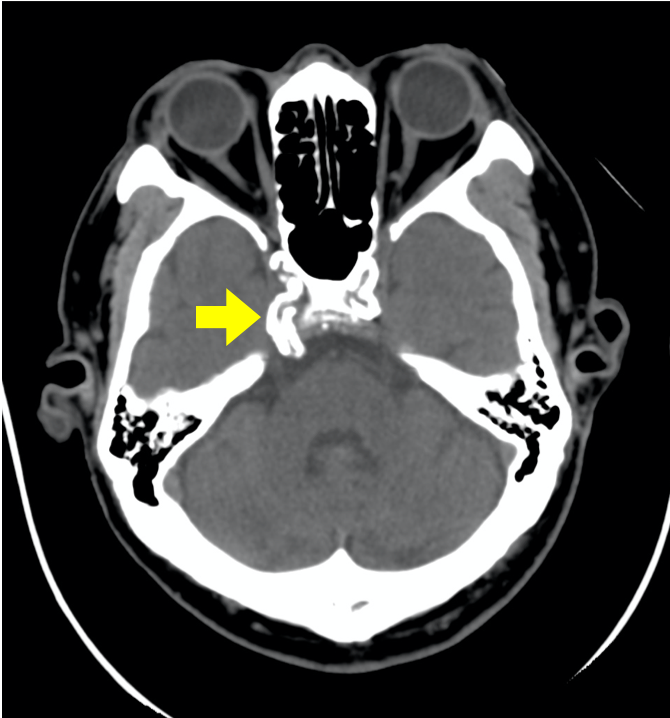 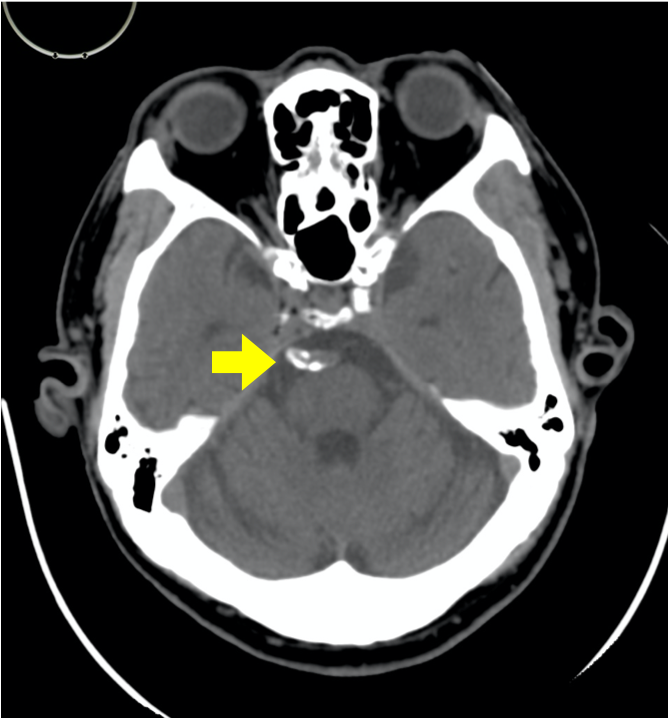 Axial non-enhanced CT shows the vessel coursing within the prepontine cistern to communicate with the basilar artery (arrow).
© Department of Radiology, Philippine General Hospital, University of the Philippines Manila, Philippines, 2019.