A 56-year-old male patient presented to the ER in haemorrhagic shock with abdominal pain and vomiting fresh blood. His medical history included an open aortobiiliac bypass with a polyester graft to treat Leriche syndrome two years ago.

Due to the previous history of aortobiiliac bypass, an aortoenteric fistula was initially suspected and CT was performed before an upper gastrointestinal endoscopy.

Unenhanced CT showed a distended stomach and duodenal lumen filled with blood clots and the loss of the normal fat plane between the aorta and the duodenal wall.

The arterial phase showed a massive contrast extravasation from the vascular graft into the duodenal lumen and the venous phase a more extensive collection of blood in the bowel lumen.

The patient underwent emergency laparotomy: The bowel was resected and the graft was removed and replaced.

Aortoenteric fistula (AEF) is a communication between the aorta and the gastrointestinal (GI) tract and represents an uncommon cause of catastrophic gastrointestinal bleeding (GIB) with a mortality approaching 100% without emergent surgery [1].

-PAEF: (annual incidence around 0,007 per million [1]): It occurs de novo between the aorta and the bowel in patients with no previous aortic surgery with an untreated aortic aneurysm (closely associated with atherosclerosis and less frequently with other predisposing conditions such as syphilis, tuberculosis, infection of mycotic aneurysms and collagen vascular disease), which long-standing pressure erodes the bowel loops, usually the 3rd or 4th parts of the duodenum. It has also been described in cases of infectious aortitis, penetrating peptic ulcers and GI malignancies invading a normal aorta [2].

-SAEF: (annual incidence around 0,3% to 0,2% [1]): It occurs in patients with previous aortic reconstruction surgery between a suture line of a vascular graft and the intestine, secondarily to pulsating pressure of the graft on the bowel wall, pseudoaneurysm formation and/or infection of the graft.  Its most common site is the duodenum (73%), specially its third part [2]. The interval between surgery and the development of fistula can range from months to years [3].

Symptomatology can be varied but includes signs of infection and of GIB. Other symptoms are abdominal pain (30%), back pain (15%) and abdominal pulsatile mass (6%). [4].

AEF tends to present with transient and self-limited bleeding episodes (“herald” GIB) due to mucosal ulceration and focal necrosis followed by massive life-threatening haemorrhage due to a true aortoenteric communication.

AEF can be mistaken for other causes of upper GIB (oesophageal/gastric varices, peptic ulcer disease or Mallory-Weiss tears).

Due to its short acquisition time and assessment of both vascular and extravascular structures, computed tomography (CT) is the first-line technique in cases of suspected AEF.

Typical CT features of AEF include loss of the normal fat plane between the aorta and the bowel, gas or liquid surrounding the aorta or the vascular graft (highly suspicious  3-4 weeks after surgery), focal bowel wall thickening and extravasation of aortic contrast media into the bowel lumen [5].

Treatment requires excision of the graft, wide debridement in cases of infected tissue, bowel repair or resection and revascularisation with in situ graft replacement or placement of an extra-anatomic bypass. 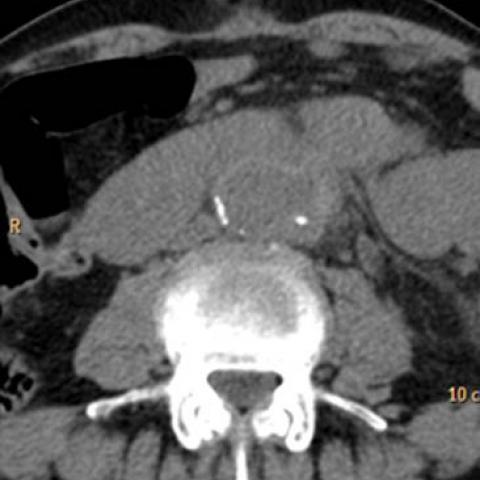 Unenhanced CT shows the distension of the duodenal lumen and the loss of the normal fat plane between the aorta and the duodenal wall.
Figure 2 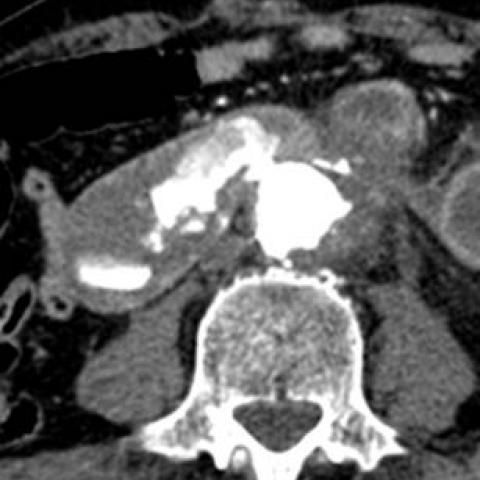 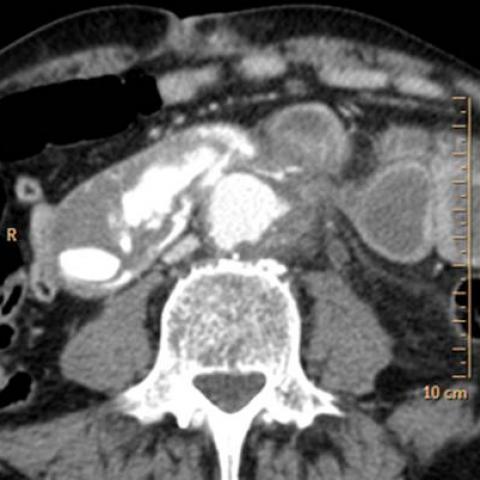 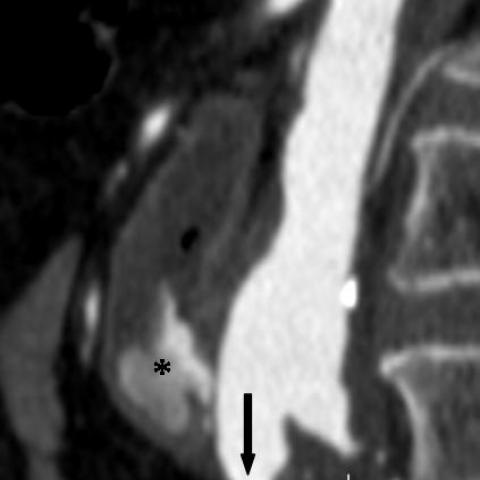 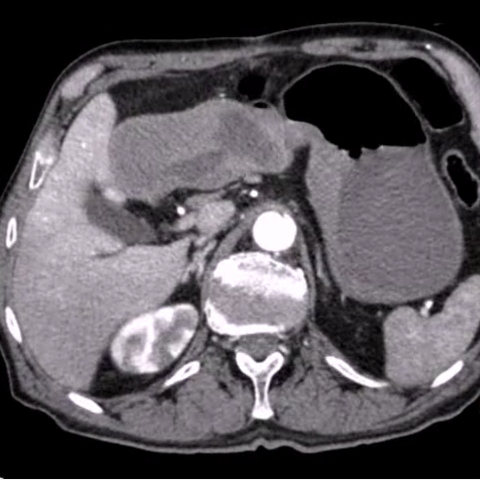 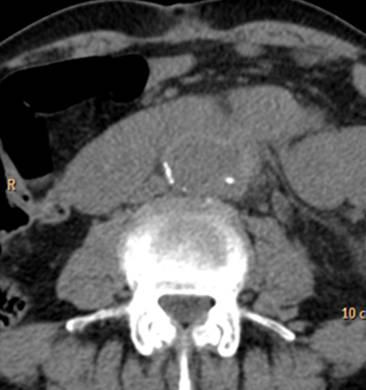 Unenhanced CT shows the distension of the duodenal lumen and the loss of the normal fat plane between the aorta and the duodenal wall.
Department of Radiology. Hospital Universitario 12 de Octubre. Madrid, Spain 2019. 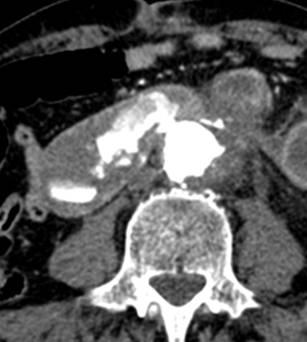 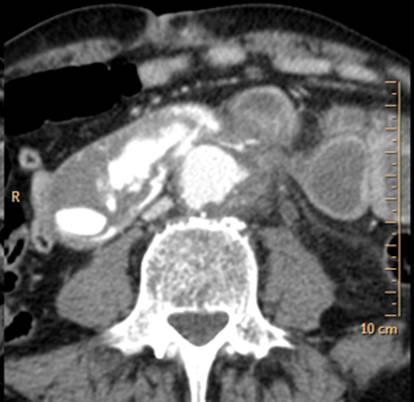 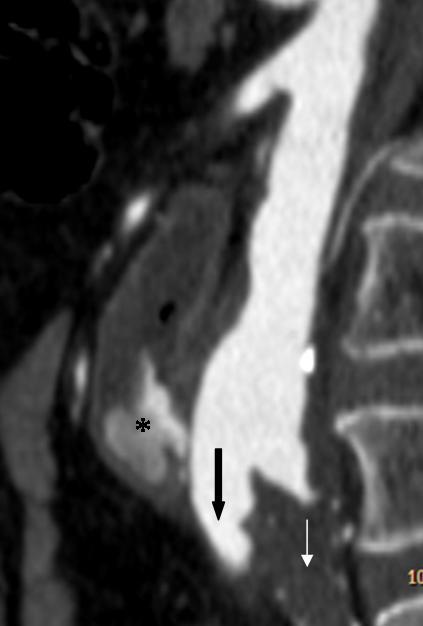