A 26-year-old male patient was evaluated with a recent onset of low-grade fever, cough and shortness of breath.The man is a baker, nonsmoker, allergic to some drugs and common allergens.
He suffered from bronchial asthma, eczema at hands and feet and nasal polyposis.
His past medical history showed a previous episode of pericarditis.

It was performed a chest X-ray that reported subtle peripheral opacities with apical predominance.
The blood cell count showed leukocytosis and eosinophilia and it was recommended therapy with oral antibiotic and aerosol with corticosteroids and b2 agonist for one week. It gave no symptom resolution.
Therefore, due to the persistence of the symptoms with the patient, a chest CT was performed. It revealed bilateral ground-glass consolidations mainly subpleural and located prevalently in the upper lobes and several enlarged mediastinal lymph nodes with short-axis diameter <10mm [1].

Moreover, a punch biopsy  was performed of a dyschromic area within the known eczema. The histological report described features consistent with eosinophilic granulomatosis with polyangiitis (EGPA), also known as Churg-Strauss syndrome.

Eosinophilic lung diseases are a heterogeneous group of diseases that are characterised by excessive infiltration of eosinophils within the lung interstitium and alveoli and may be idiopathic, secondary or related to vasculitis such as EGPA.
They share overlapping features and the diagnosis is based on pulmonary opacities on a chest radiograph or chest CT and peripheral eosinophilia. Tissue eosinophilia at transbronchial lung biopsy and increased eosinophils in bronchoalveolar lavage (BAL) fluid (normal eosinophils’ count is less than 1%) are indicated if the clinical, radiological and laboratory findings are uncharacteristic. In particular, a biopsy is often performed to try to find eosinophils, eosinophilic granulomas, and vasculitis in order to rule out the idiopathic form.

EGPA is a small vessel systemic vasculitis that may affect various organs. The lung is the most commonly involved organ, followed by the skin. Approximately 50% of the patient with EGPA has a past history of asthma. They may also suffer from paranasal sinus abnormalities, diarrhoea, skin purpura and joint pain. Most severe symptoms may regard central nervous system (neuropathy), kidneys and heart.
The American College of Rheumatology stated that the presence of four or more of these six criteria is required to diagnose EGPA: asthma, eosinophilia > 10% on differential white blood cell count, mononeuropathy or polyneuropathy, non-fixed pulmonary infiltrates on imaging, paranasal sinus abnormality and biopsy containing a blood vessel with extravascular eosinophils. [2]
Effectively the reported case showed 5/6 signs (chronic asthma, nasal polyps, opacities on CT, eosinophilia and significant punch biopsy) plus cutaneous purpura and a past pericarditis episode.
EGPA has a low mortality rate, but patients with extra-lung involvement require additional immunosuppression. Cardiac involvement in EGPA can occur in about 60% of the cases and it is the leading cause of mortality in EGPA.  [3,4]
The typical chest radiographic findings in EGPA are peripheral consolidations involving mainly the upper lobes bilaterally and, eventually, a small pleural perfusion. Sometimes it appears as bilateral non-segmental consolidation or reticulonodular opacities.

There is a considerable overlap of CT findings among the various eosinophilic lung diseases. The most common CT findings in EGPA include patchy ground-glass opacity or multiple areas of consolidations with no segmental distribution. The distribution is unilateral or bilateral, patchy and peripheral or subpleural, often predominant in the upper or central lung regions. In our case, we recognised a bilateral patchy ground-glass pattern with upper lobe predominance.
Less common features include centrilobular nodules and smooth septal thickening (crazy paving)  but they aren’t present in our CT.
Lung volume is preserved. Less common findings include pericardic/pleural effusion and enlarged mediastinal lymph nodes. [5,6]

EGPA may simulate CEP. The latter has more homogeneous peripheral airspace consolidations, while the ground-glass opacity in CEP are less frequent and generally appear only in later stage diseases. Lastly CEP usually affects middle-aged people and has a female predilection [7].

The case we discussed illustrates typical EGPA-features: clinically we observe the anamnesis showing chronic asthma, nasal polyposis, past pericarditis and onset respiratory symptoms. Imaging illustrates a ground-glass pattern attributable to eosinophilic pneumonia and, in addition to this, laboratory (peripheric eosinophilia, BAL and biopsy) confirms the diagnosis.
Written informed patient consent for publication has been obtained. 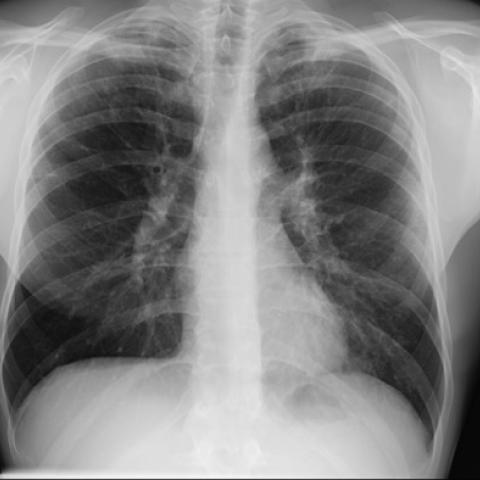 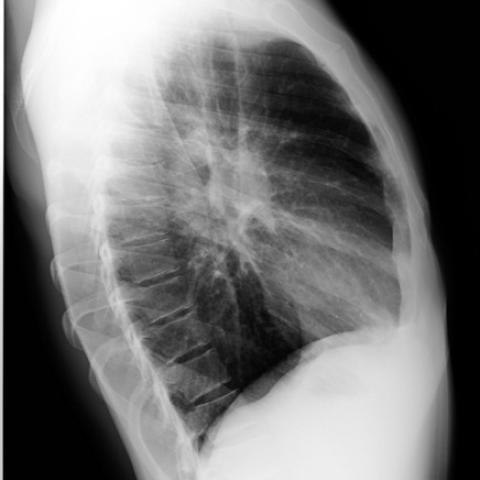 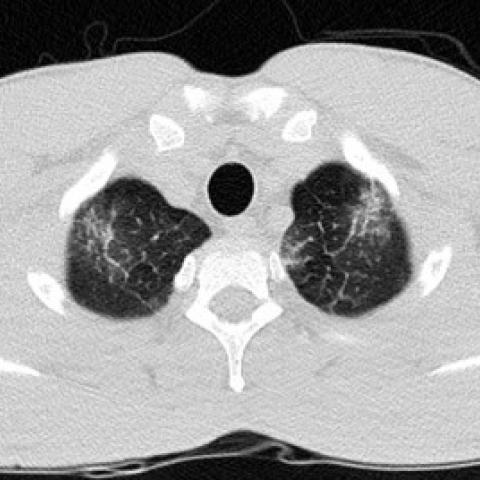 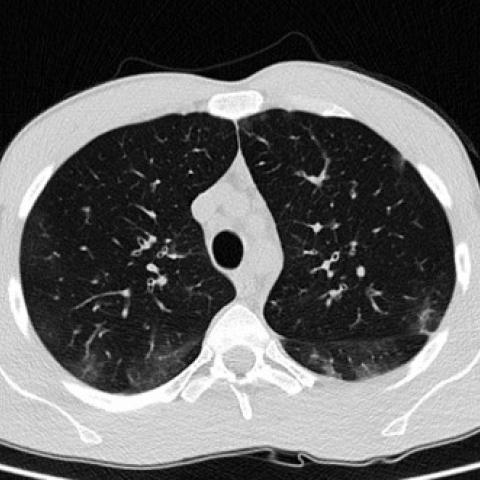 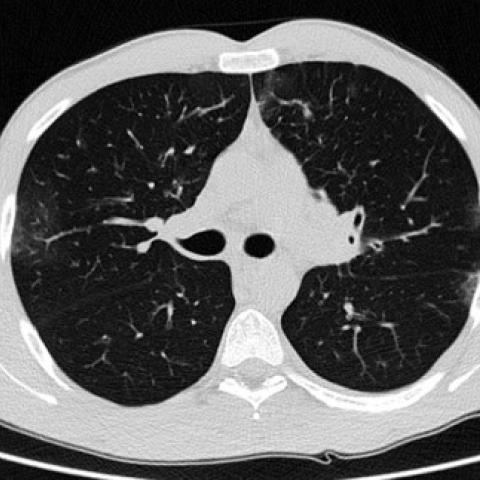 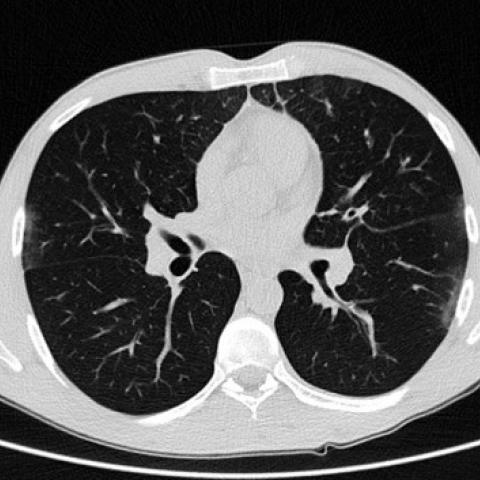 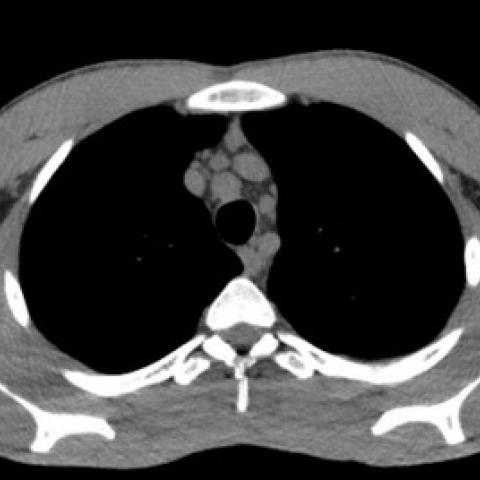 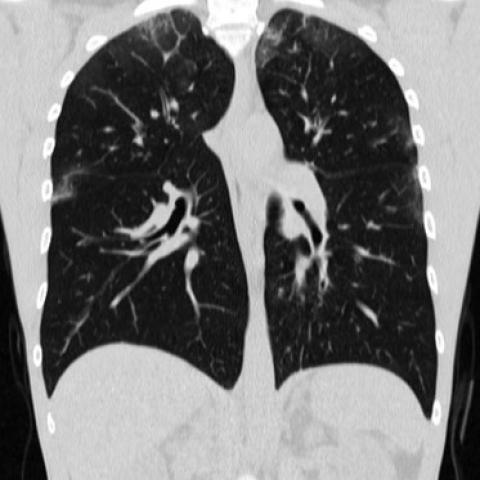 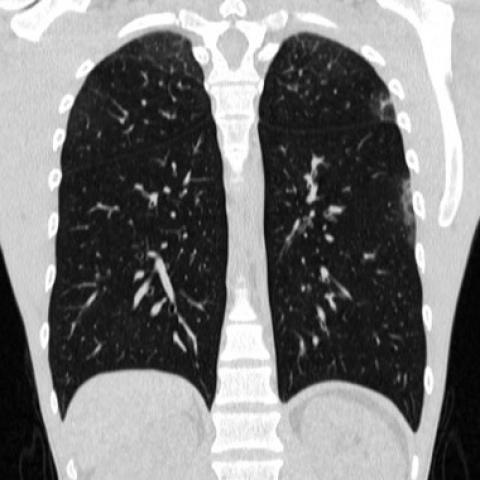 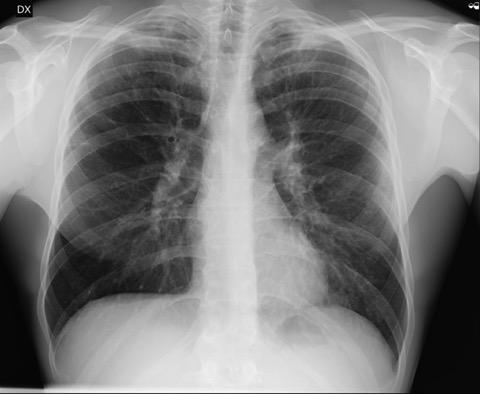 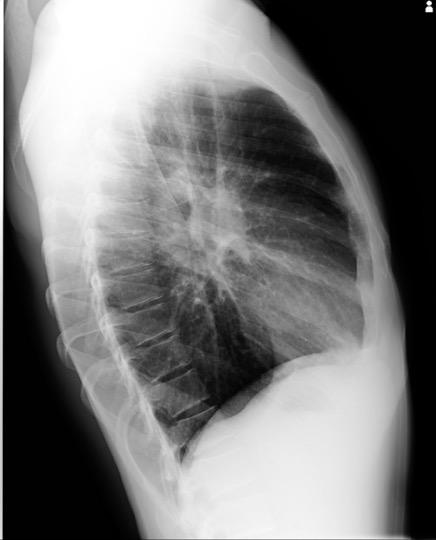 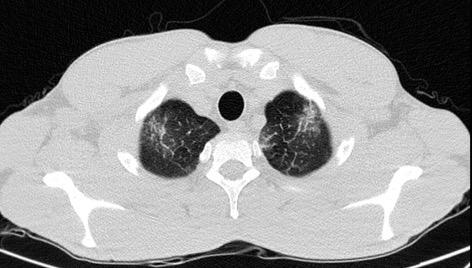 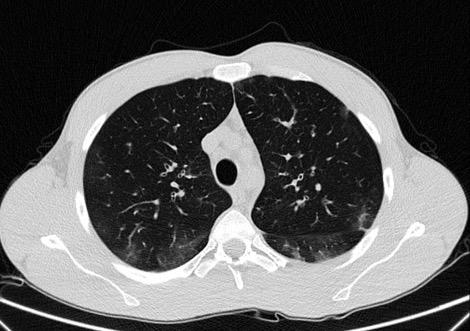 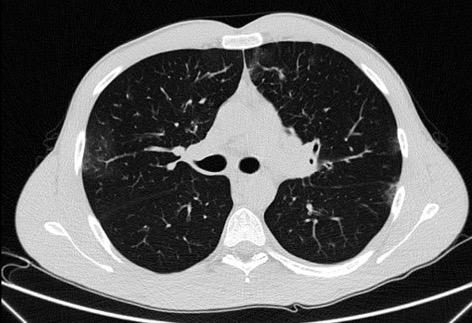 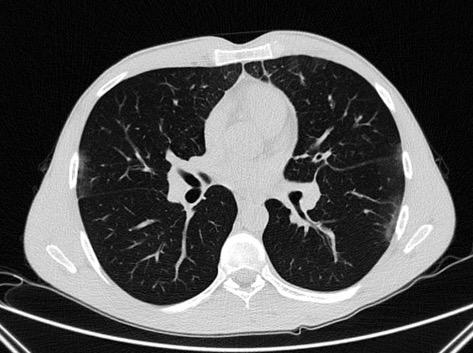 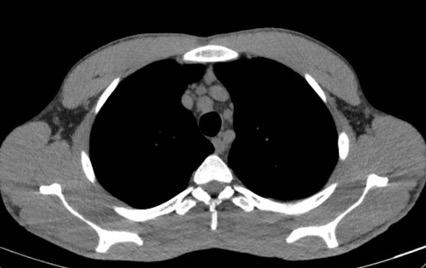 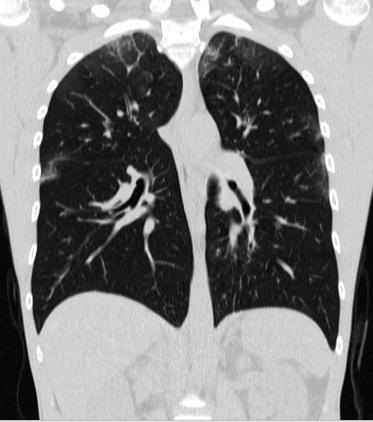 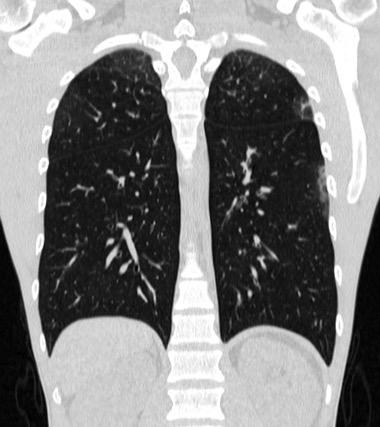