A newborn presented with purple-brown skin lesion, with 3 cm in the upper thigh. At 3-months-old the lesion had extended to the genital area (Fig. 1). Laboratory tests revealed thrombocytopenia, hypofibrinogenemia and increased D-dimers and consumptive coagulopathy was diagnosed.

Doppler ultrasound of the lesion was performed, which revelead a heterogeneous mass of imprecise boundaries with exuberant vascularisation, with a larger caliber feeding vessel, suggesting its vascular nature (Fig. 2a-c). Magnetic resonance images demonstrated on T1-weighted images an ill-defined hypointense soft-tissue thickening involving multiple planes, at the root of the thigh, which shows marked enhancement after gadolinium administration (Fig. 3a-b). Coronal short tau inversion recovery sequences (STIR) demonstrate a hyperintense lesion, extended longitudinally from the inguinal region to the middle third of the thigh, representing several arterial vessels emerging from the right femoral artery (Fig. 4 a-c). Whole body MRI was also performed to search for other vascular lesions and there were no other imaging findings (Fig. 5a-c). Considering clinical, laboratorial and imaging findings, the diagnosis of kaposiform haemangioendothelioma with Kasabach-Merritt syndrome was established. Treatment with corticosteroids and vincristine was performed with favourable response.

Kaposiform haemangioendothelioma (KHE) is a rare vascular neoplasm, locally aggressive, that can be congenital, with 50% presenting at birth. Although KHE mainly presents during early childhood, some cases have been described in adolescents and adults. It is more frequent in males [1-3].
KHE has a wide spectrum of clinical manifestations, from cutaneous lesions with a great variety of appearances to severe multifocal neoplasms, depending on its extension to vital organs and associated complications like Kasabach-Merritt syndrome and lymphangiomatosis [1]. It can be found in numerous anatomic locations, such as the trunk, extremities, retroperitoneum and in the neck or head [1,2] and tends to proliferate over several months followed by slow involution over many years [3].
Kasabach-Merritt syndrome (KMS) is a rare life-threatening disease, in which a rapidly growing vascular tumour leads to thrombocytopenia, hypofibrinogenemia with degradation products and consumption coagulopathy due to endothelial defects within the lesion causing platelet activation, platelet-fibrin thrombosis formation, clotting and coagulation factors consumption, and increased fibrinolysis.  KMS is often caused by kaposiform haemangioendothelioma or tufted angioma, even though other tumours may be responsible, such as infantil haemangioma [1,3].
Conventional radiography may show a soft-tissue mass and calcifications. Ultrasound features are nonspecific with an ill-defined, variably echogenic lesion that may contain foci of calcification [2], but Doppler ultrasound plays a key role for diagnosis because it demonstrates its high vascularised nature. Nevertheless, MR imaging of the affected skin region constitutes the best diagnostic imaging method. T1-weighted imaging reveals typical ill-defined hypointense soft-tissue thickening involving multiple planes, and on T2-weighted imaging it demonstrates heterogeneous hyperintense masses with internal dark signal intensity channels, due to vascular flow voids. The post-contrast sequences reveal diffuse and heterogeneous enhancement [1-4]. Although whole-body MR is not necessary for diagnosis, it may be considered during diagnostic work-up of patients with clinically suspected vascular malformations, to identify multiple lesions and their distribution in diffuse vascular malformations, such as haemangiomatosis and lymphangiomatosis [5]. When kaposiform haemangioendothelioma is complicated by Kasabach-Merritt syndrome, biopsy is not frequently performed because of the high risk of bleeding.
Surgical treatment is considered the cornerstone of therapeutic management, but various other treatments are used with varying degrees of success, including systemic corticosteroids, irradiation, compression, embolisation, antifibrinolytic agents, platelet aggregation inhibitors and interferon [1]. In addition, sirolimus is currently used to reduce tumour volume, in many cases with promising results. 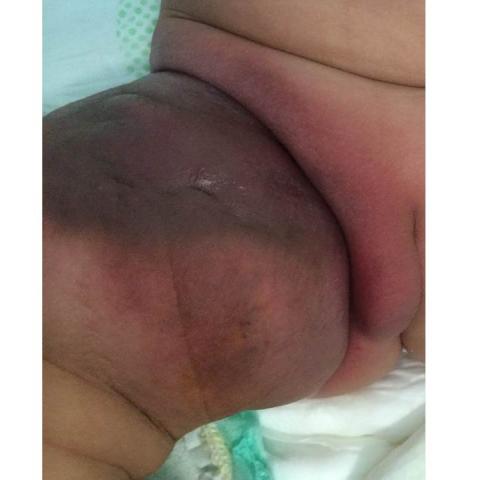 A 3-month-old female with purple-brown skin lesion, involving two proximal thirds of the anteromedial face of the right thigh and the homolateral genital area. There are no ulcerated lesions.
Figure 2 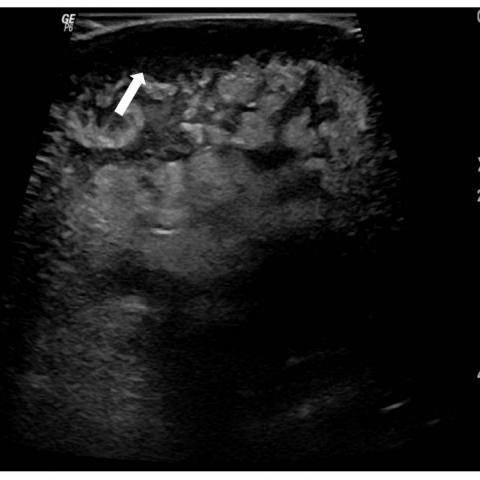 Longitudinal scan showing a heterogeneous mass of imprecise boundaries, within the soft tissues, in the topography of the skin lesion. Additionally, skin thickening (straight arrow) and subcutaneous tissue oedema are observed. 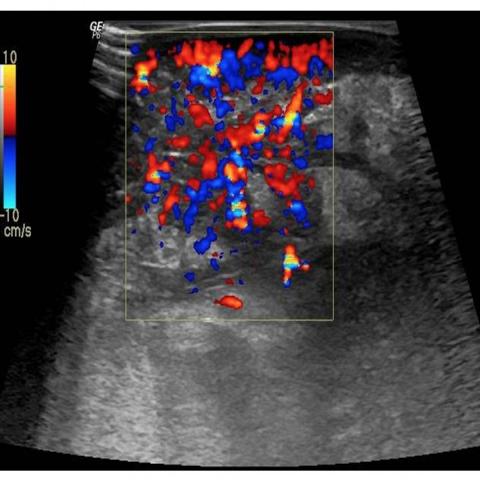 Longitudinal Doppler scan revealed a heterogeneous mass with ill-defined margins which shows exuberant vascularisation, in the subcutaneous cellular tissue at the location of the cutaneous lesion. 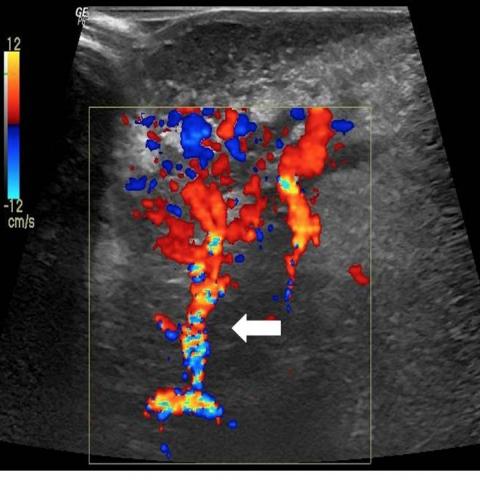 Longitudinal Doppler scan revealed a heterogeneous mass of imprecise boundaries with exuberant vascularisation, in which a larger caliber vessel (arrow) appears to nourish it, suggesting its vascular nature.
Figure 3 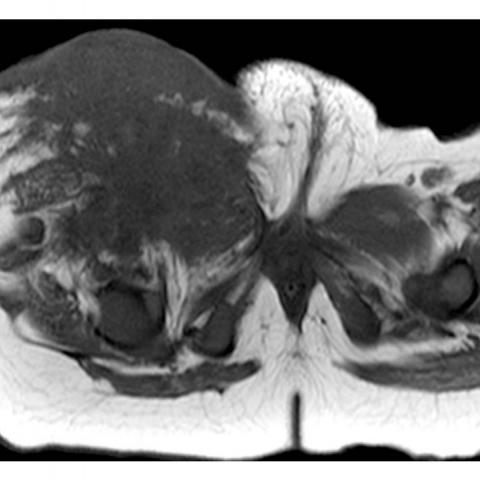 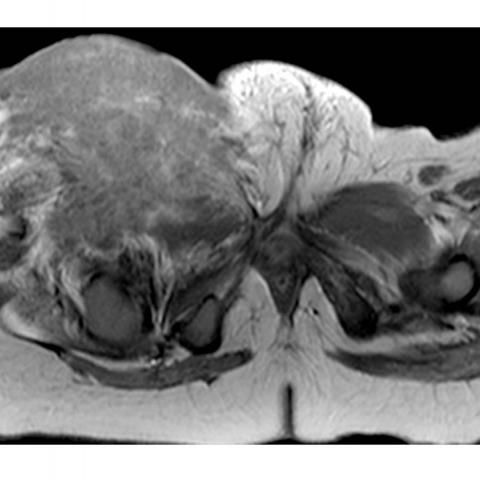 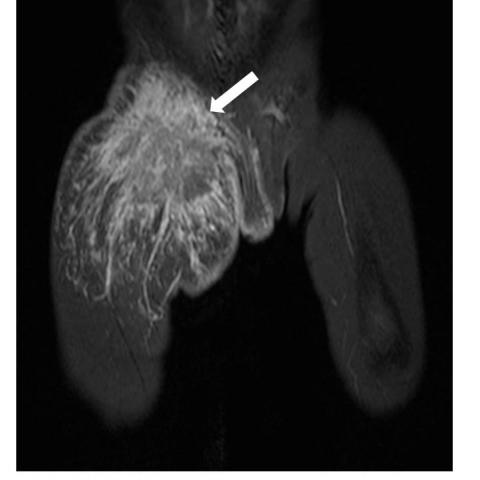 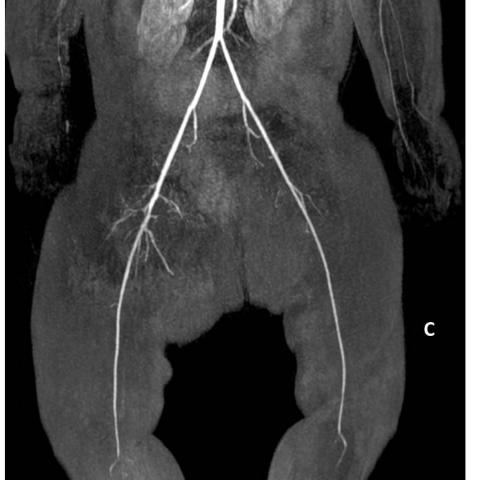 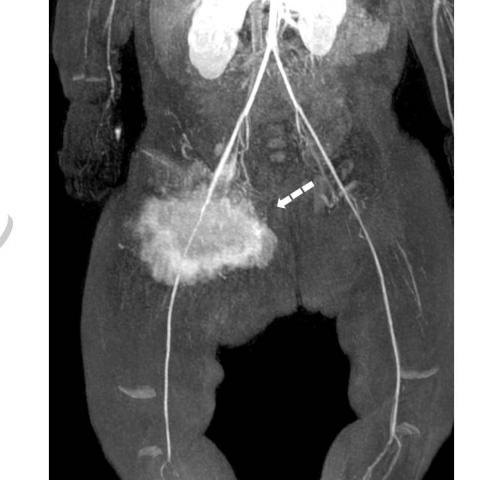 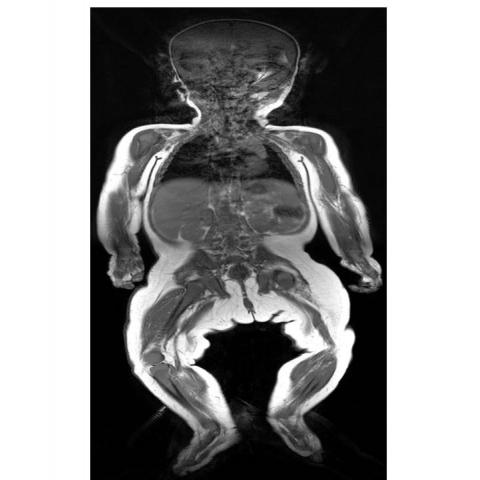 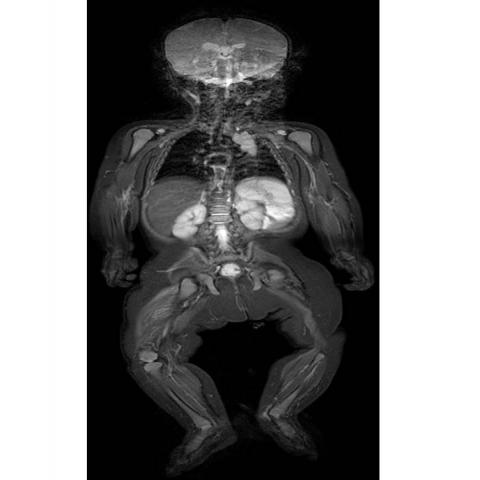 STIR sequence of whole body does not reveal other imaging alterations, namely of vascular nature. 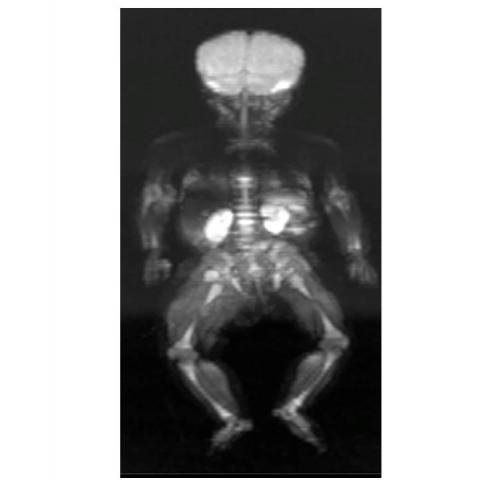 Diffusion-weighted sequence of whole body does not reveal other imaging alterations, namely of vascular nature. 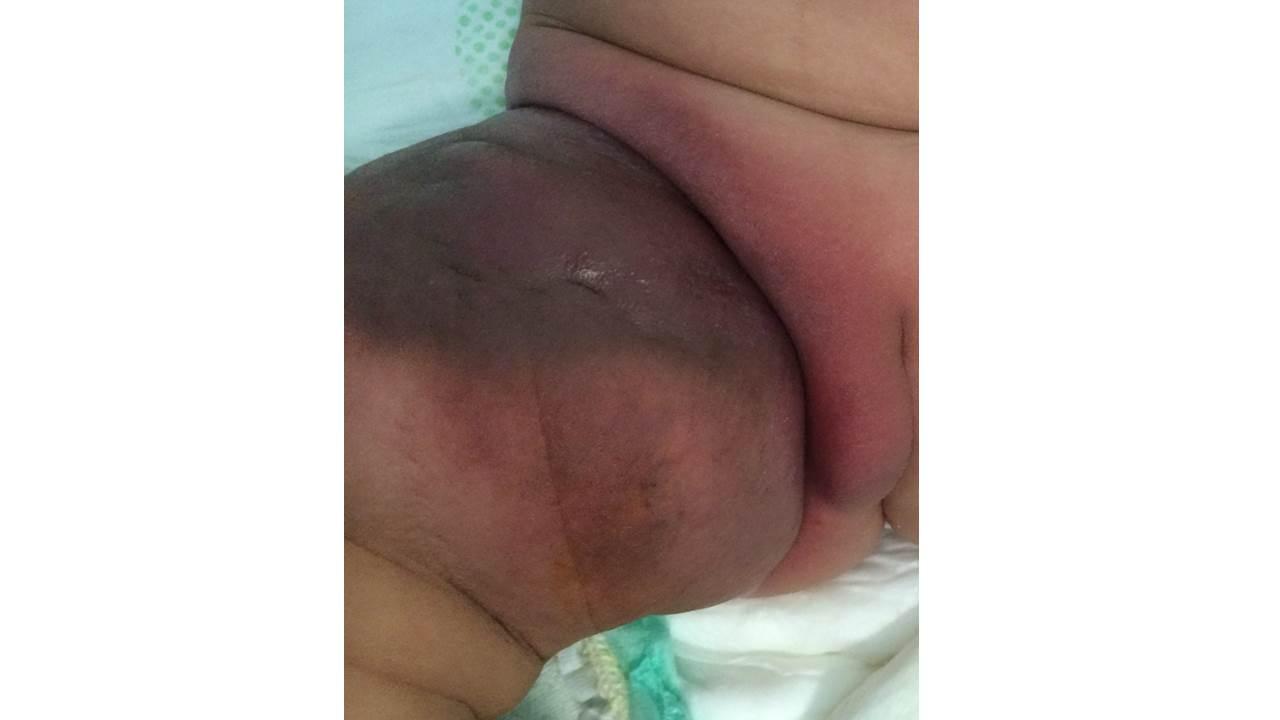 A 3-month-old female with purple-brown skin lesion, involving two proximal thirds of the anteromedial face of the right thigh and the homolateral genital area. There are no ulcerated lesions.
Department of radiology, Universidade Federal de São Paulo, Brasil 2019 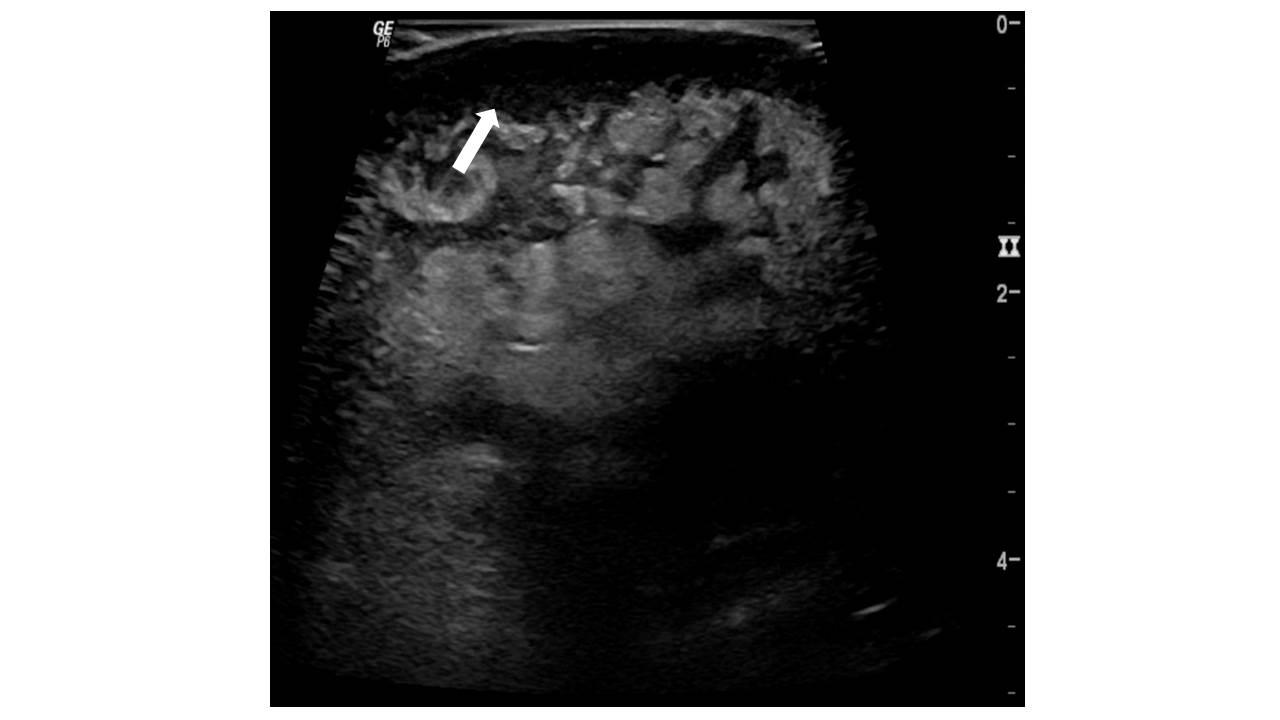 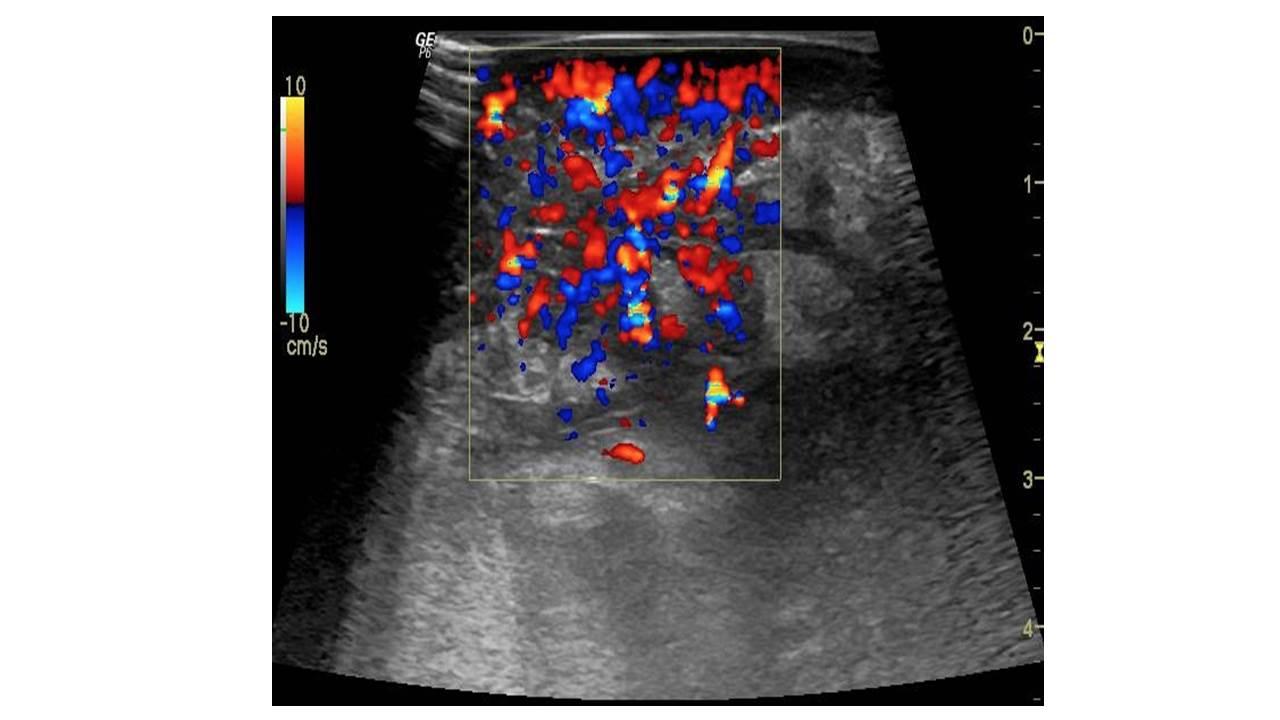 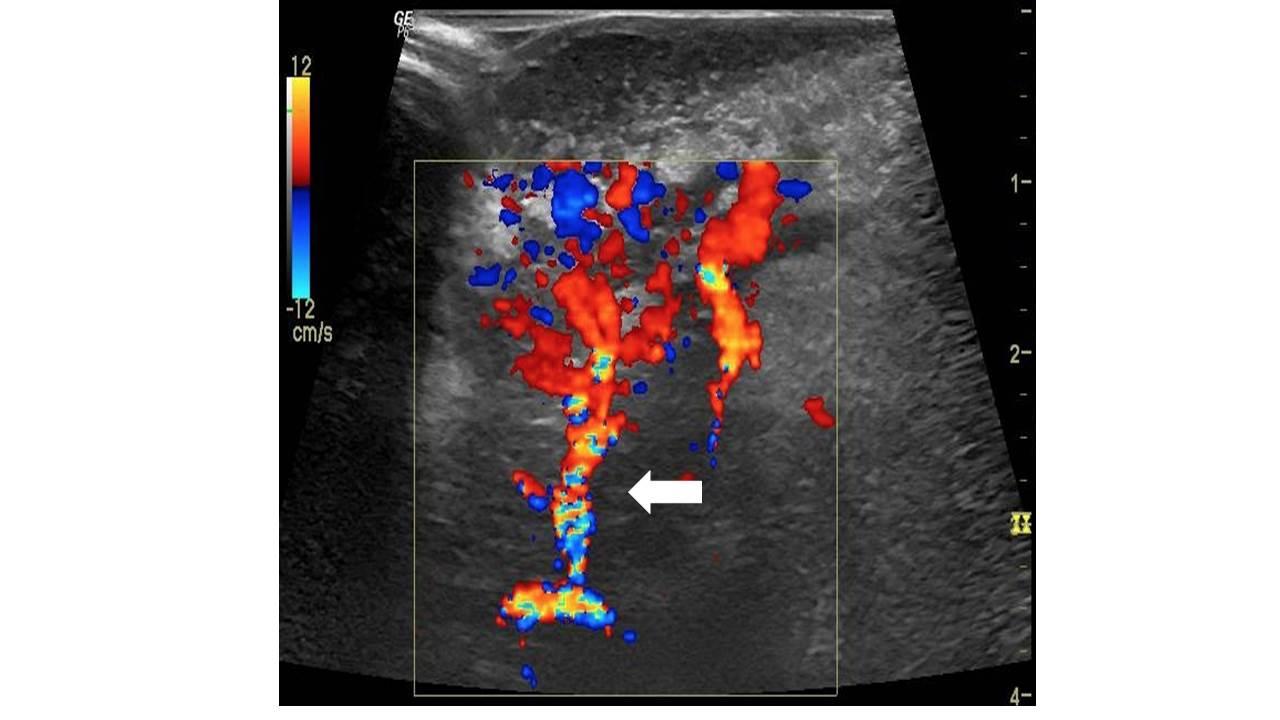 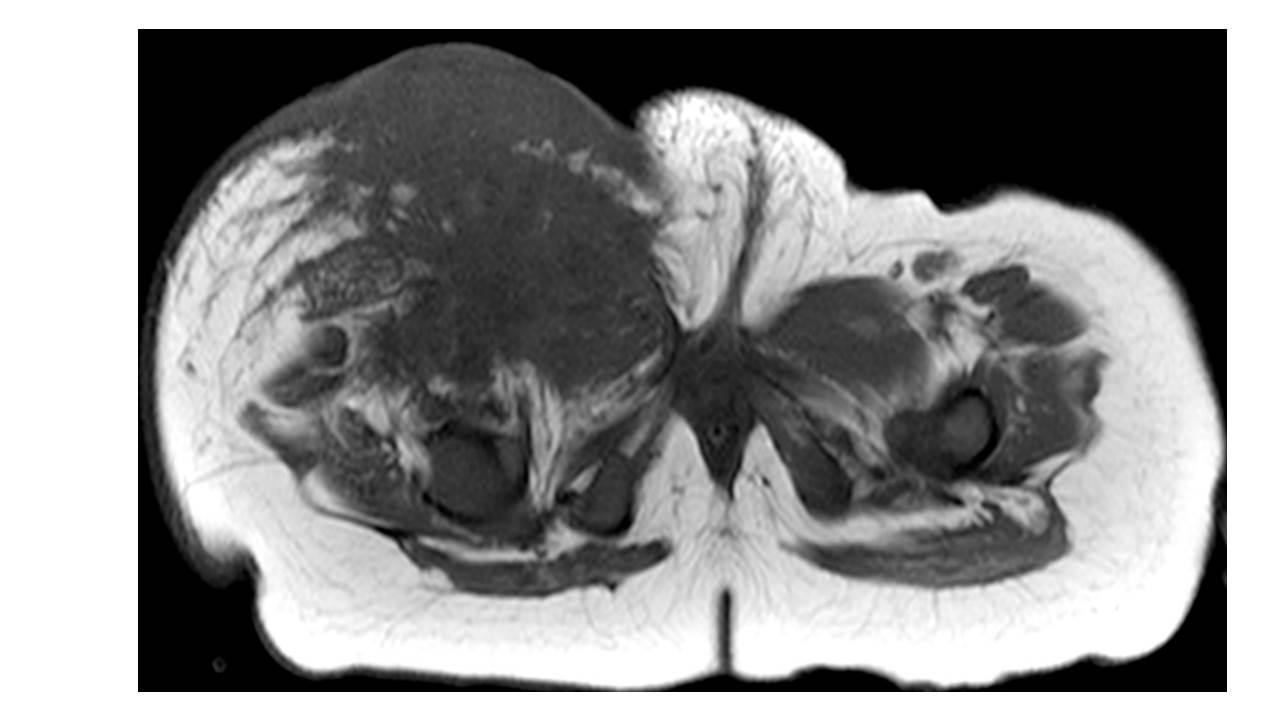 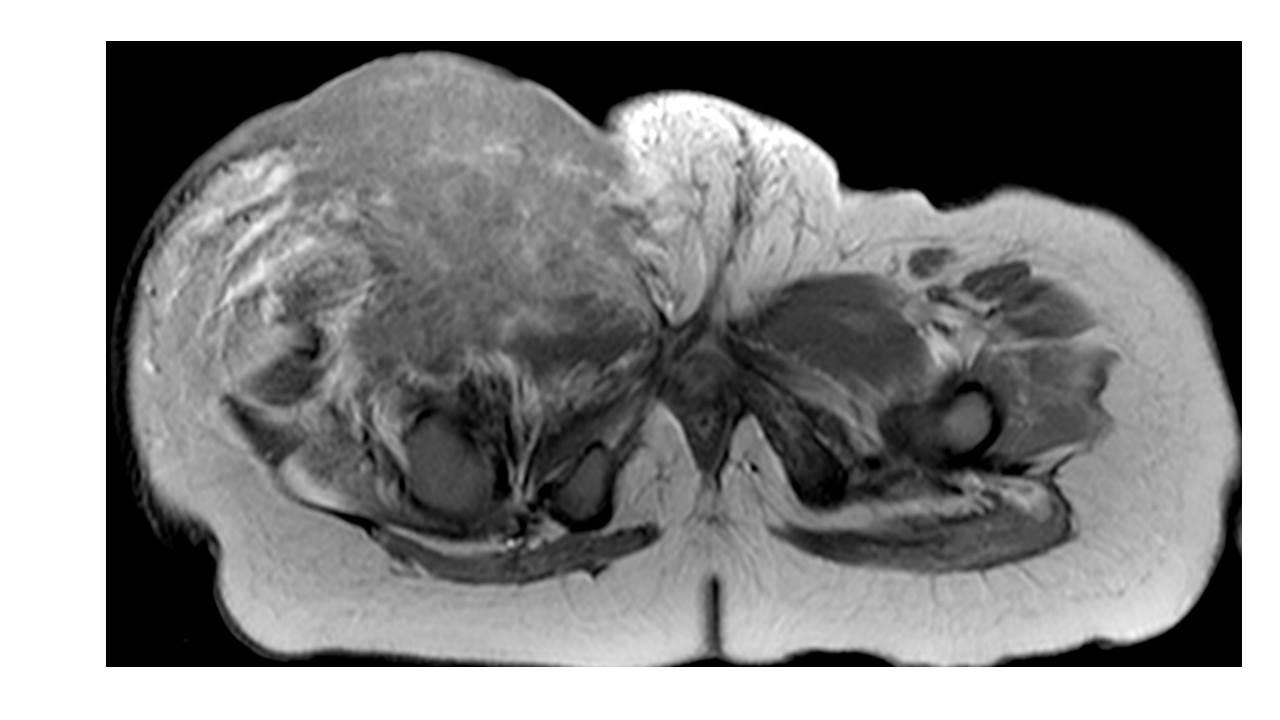 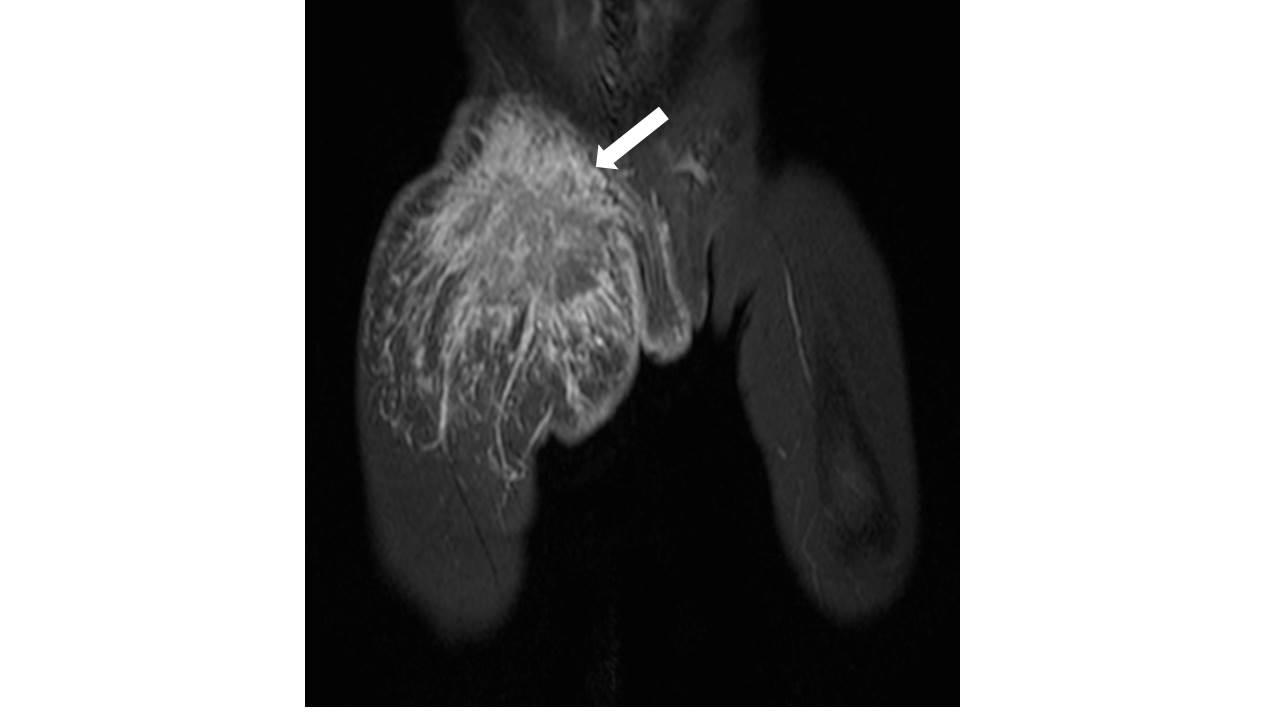 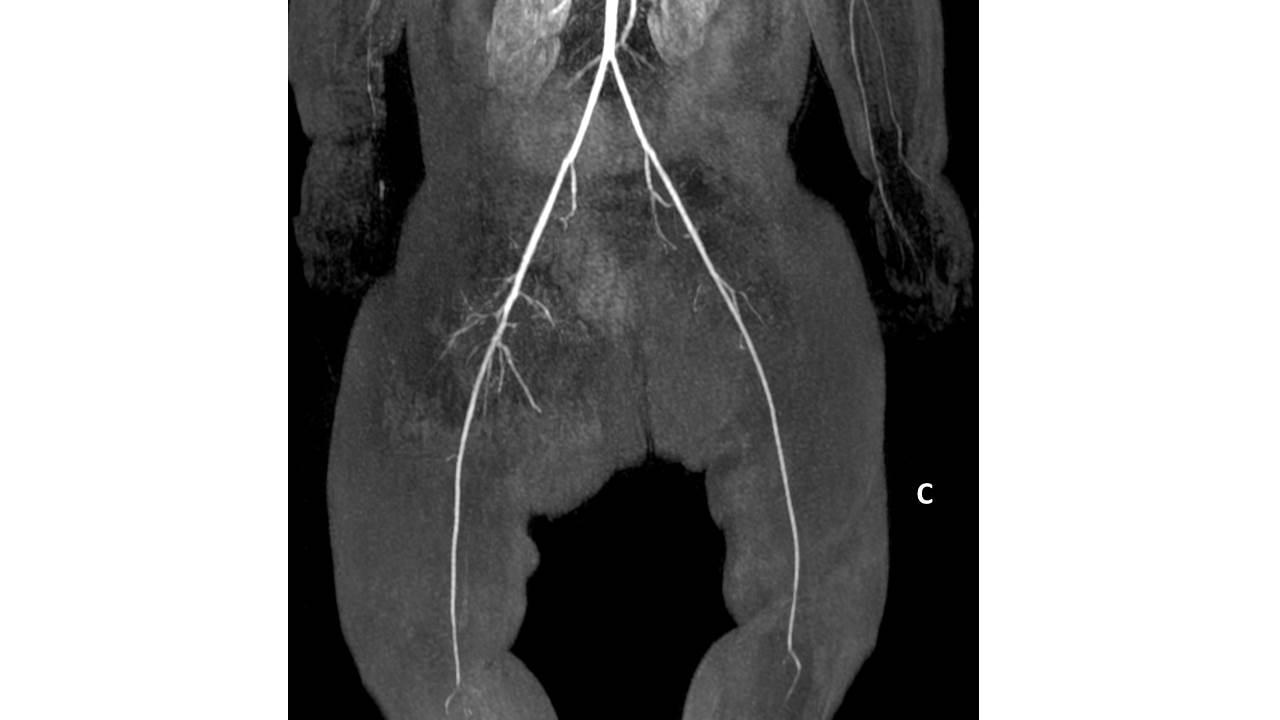 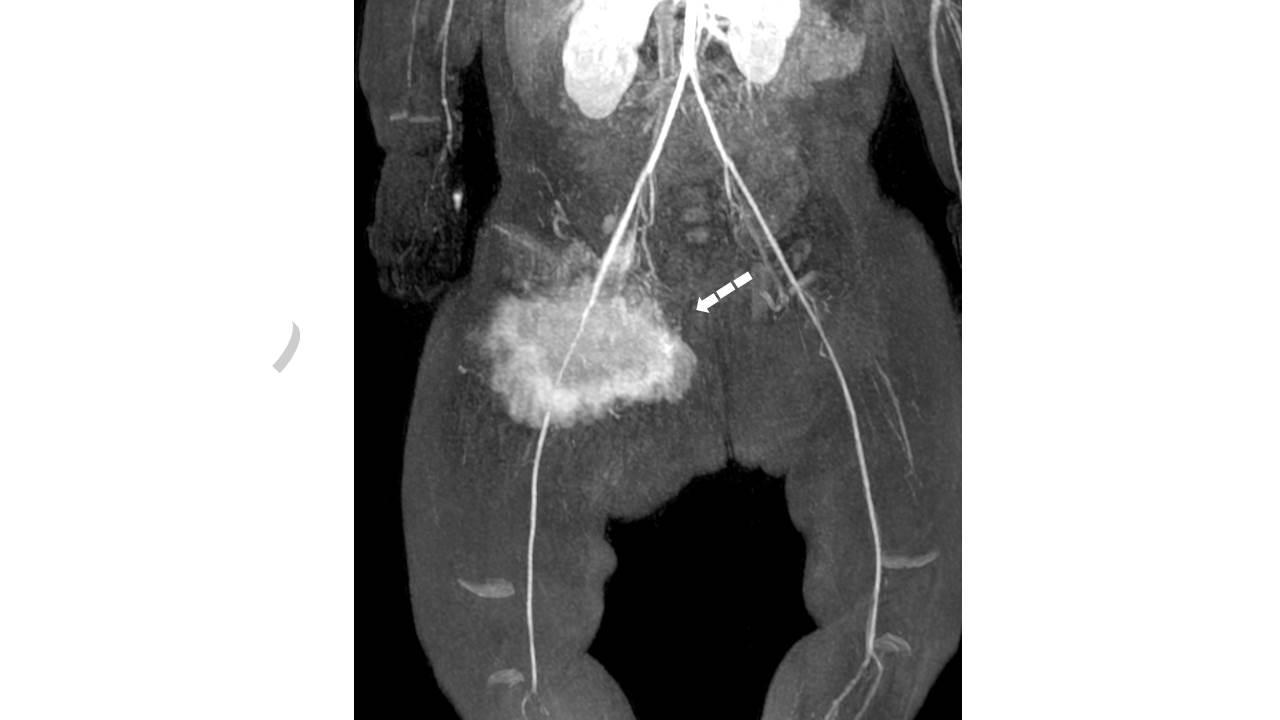 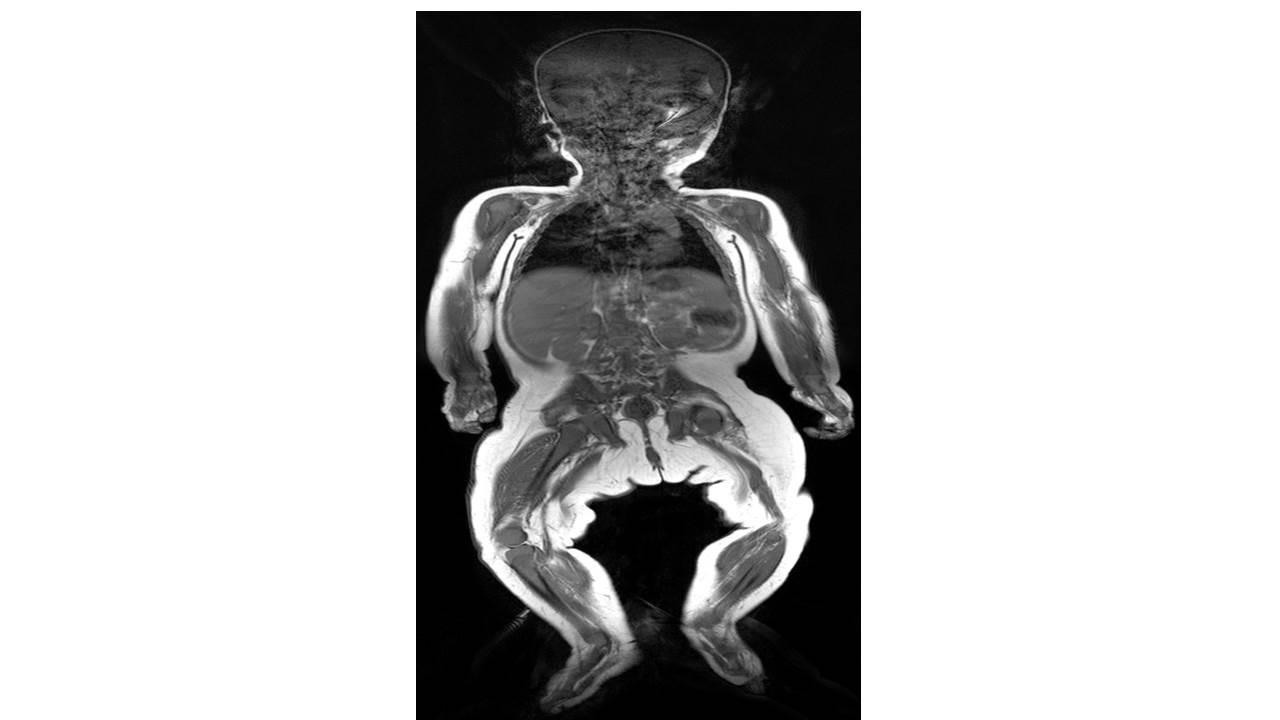 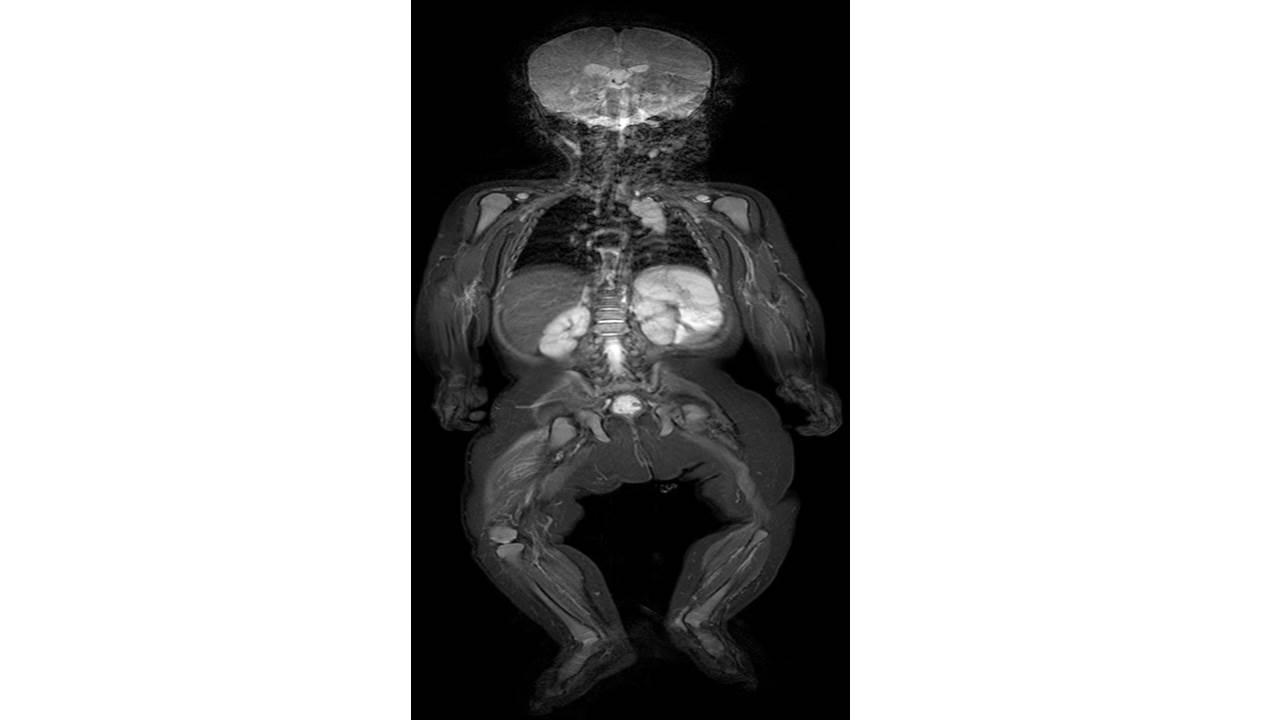 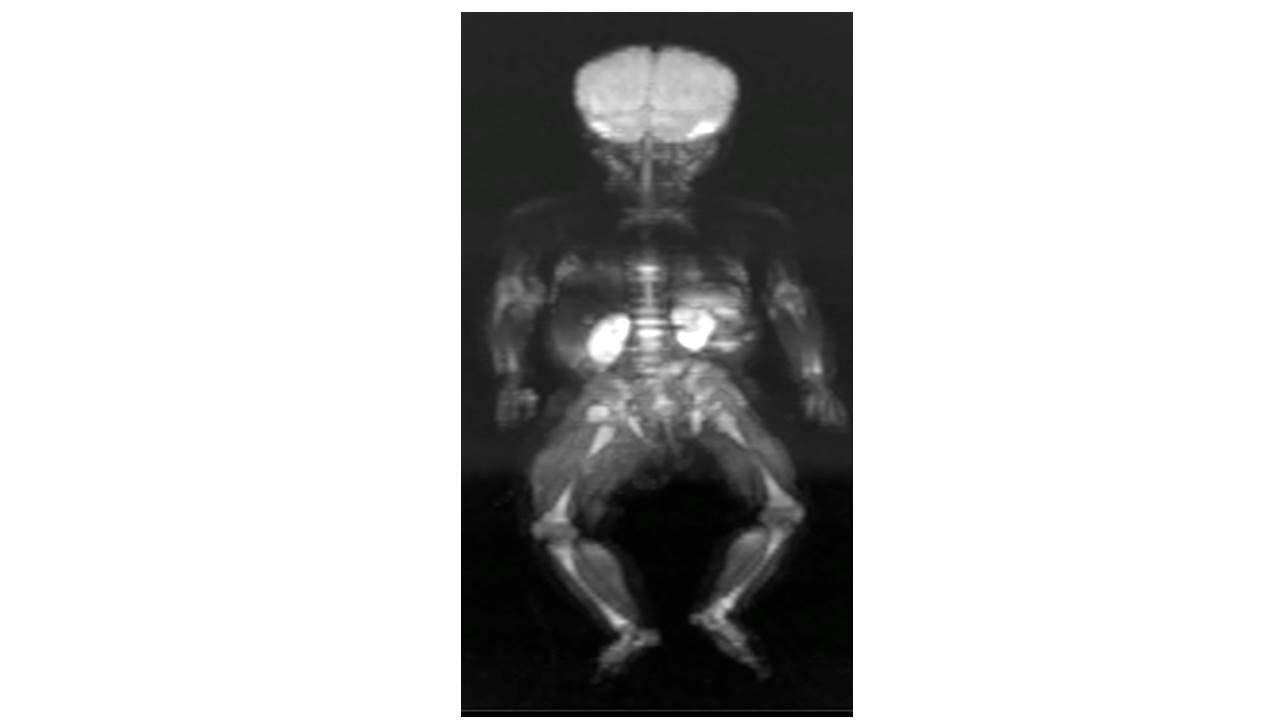