Email of the corresponding author: jmfelicesfarias@gmail.com

The patient presented with vision loss due to a progressive development of a lens cataract in the left eye. Ophthalmologist could not properly evaluate posterior segment of the ocular globe, because of severe opacity provoked by the cataract lens. Hence, they underwent an ultrasound.

Eye seems to be smaller than usual in the ultrasonography. Anterior eye segment is widely occupied by several concentric and circular hyperechogenic structures, which might be attributable to mature cataracts (Fig. 1). Vitreous chamber is completely crossed by a thin, lineal, straight and hyperechogenic structure, occupying the anatomical demarcation of the hyaloid conduct (Fig. 2). This structure is fixed to the posterior capsule of the lens (Fig. 3) and also to the optic nerve (Fig. 4). Doppler mode does not reveal any flow inside the aforementioned structures nor in its periphery (Figs. 4 and5), as retinal detachment usually shows Doppler flow. When patient is asked for eye mobilisation, the aforementioned structure moves strictly following the sight direction (Fig. 6). Movement of the structure is firm and not fluctuating in the vitreous chamber, as vitreous detachment membranes usually move. Punctate hyperechogenic foci can also be seen in the vitreous chamber.

Persistent hyperplastic primary vitreous (PHPV) is a congenital anomaly that usually debuts during the first weeks after birth. It happens due to a failure in the regression of foetal hyaloid vasculature and primary vitreous, which remains inside the hyaloid canal in the vitreous chamber leading to fibrosis and several abnormalities [1]. Unilateral condition in approximately 90-98% of cases, which might associate other congenital ocular and systemic diseases [1-3].

These patients are often affected by cataracts which may hinder the clinical diagnosis of PHPV. Ultrasonography allows the evaluation of the vitreous chamber despite cataracts, therefore the best first diagnostic step is to assess PHPV [4].

Ultrasonography typical finding is an hyperechogenic and straight stalk, crossing the vitreous chamber occupying the hyaloid canal, not occupied in healthy population (Fig. 7). Following the hyaloid canal, the stalk may be fixed to the optic nerve papilla, to the posterior capsule of the lens, or to both of them (Figs. 8-10) [1, 5]. Where the stalk is fixed, determines the type of PHPV [1, 6].
When the abnormal vasculature is fixed to the lens it originates fibrosis and cataracts (Fig. 8) [1].
If attached to the posterior wall, retinal detachment occurs in relation to the traction exerted by the persistent hyperplastic vitreous (Fig. 9) [1].
The hyperechogenic stalk might be so thin in any portion that could be visualised as inconstant. Similar findings may be revealed on pulsed Doppler, so arterial flow inside the stalk could or not be shown up depending on the thickness of the persistent abnormal vessels [7].
It stays in the vitreous chamber without fluctuation during eye movement.

It is important to evaluate the presence of retinal or vitreous detachment if posterior PHPV (Fig 11a-b)[1], cataracts or glaucoma if anterior PHPV, because of its common association [3, 7]. It is also important to exclude retinoblastoma by the finding of Doppler flow inside the stalk and the absence of a calcified mass (Fig. 12) [7].
Typical imaging appearance on MRI is a tubular structure hyperintense in both sequences T1 and T2 [8].
Similar tubular hyperintense structure is the main finding in CT, besides of an increased density of the vitreous and absence of calcification [7].

Take home message: ocular ultrasonography is particularly useful when PHPV is suspected. It might be performed even in adult age despite being typically related to a diagnosis during neonatal period [1]. 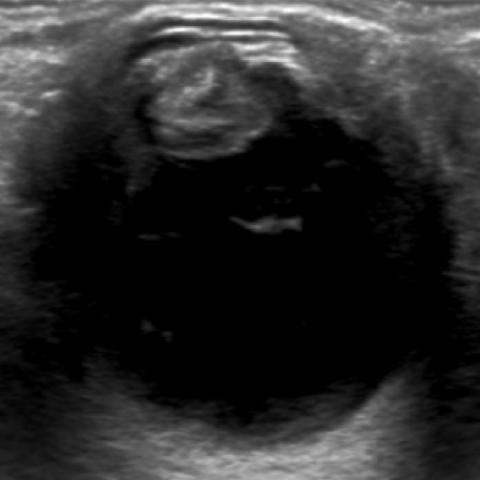 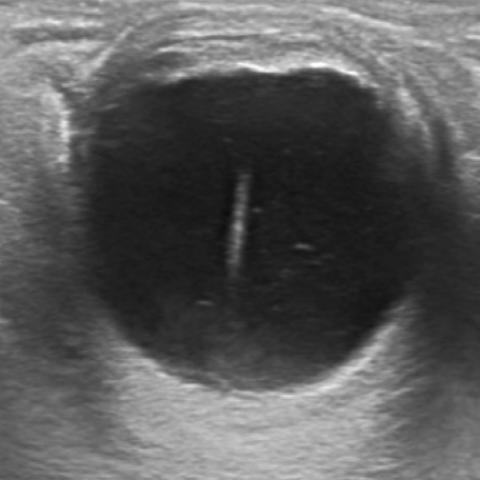 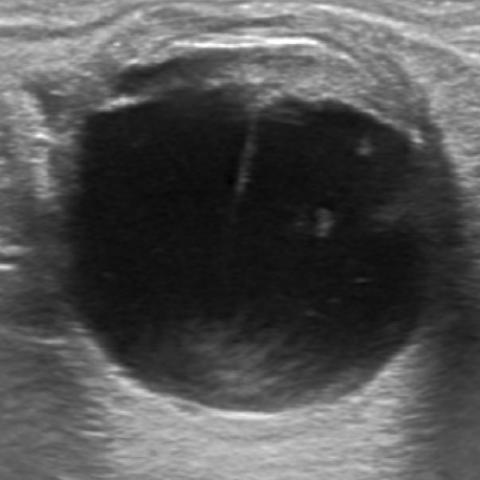 Stalk fixed to the posterior capsule of the lens
Figure 4 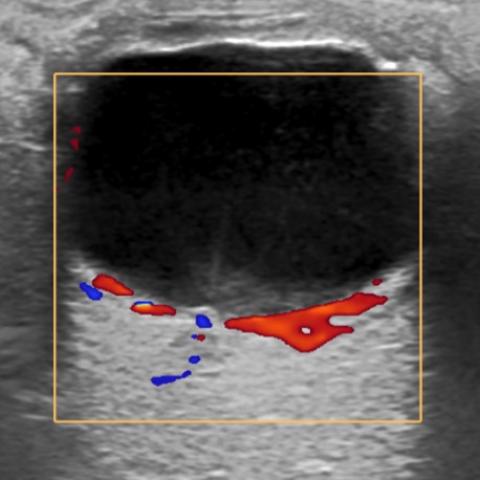 Stalk fixed to optic nerve in the posterior pole. No Doppler flow is revealed inside the stalk.
Figure 5 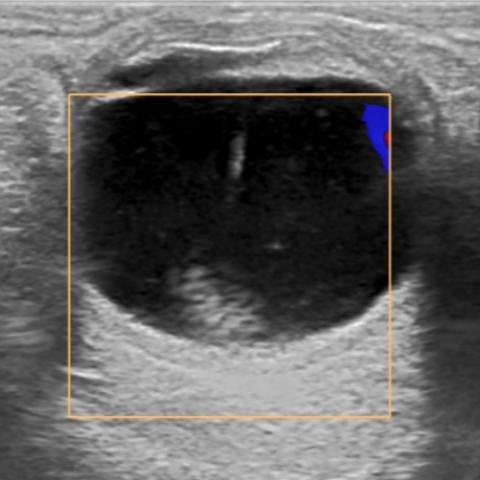 No Doppler flow is revealed inside the stalk. Which is an important item for differential diagnosis with retinal detachment.
Figure 6 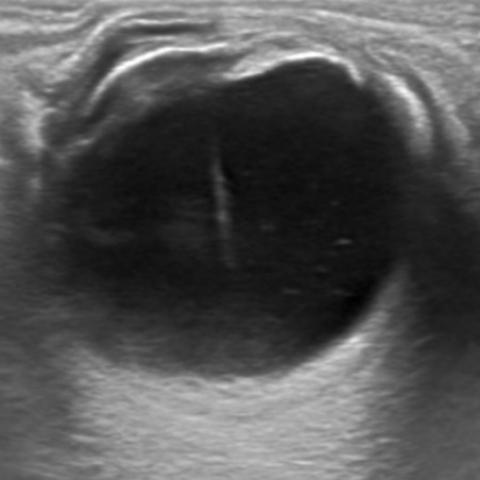 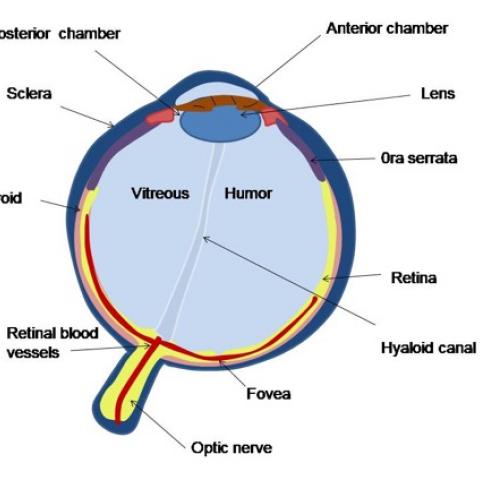 Anatomy of the healthy eye. Hyaloid conduct is not occupied by any vascular structure.
Figure 8 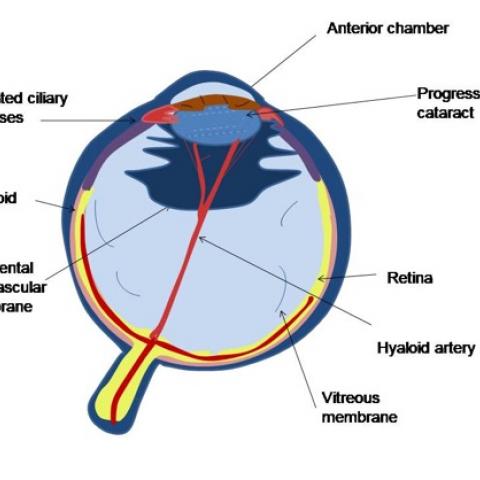 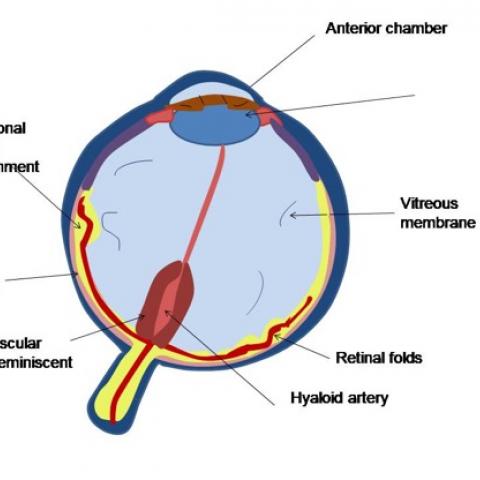 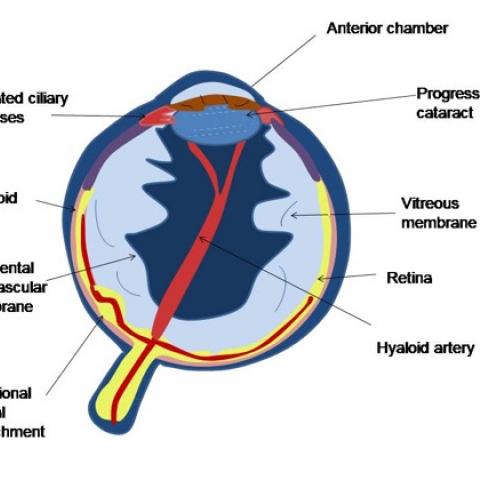 Combined persistent hyperplastic primary vitreous which provokes abnormalities in both anterior and posterior segment of the eye.
Figure 11 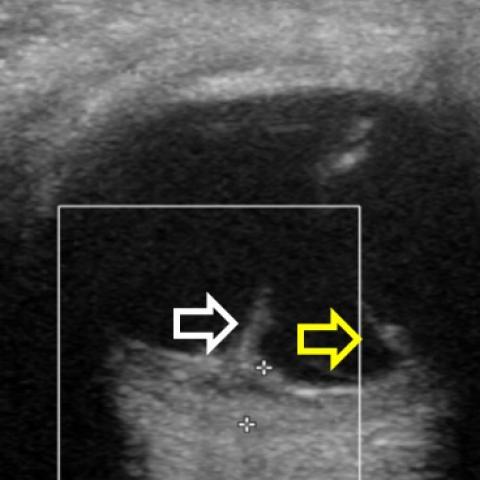 Position in the vitreous chamber is main for differential diagnosis between PHPV, always occupying the hyaloid conduct (white arrow), and any kind of detachment that may appear in any position inside the vitreous as seen at the lateral of the ocular globe in the image (yellow arrow). 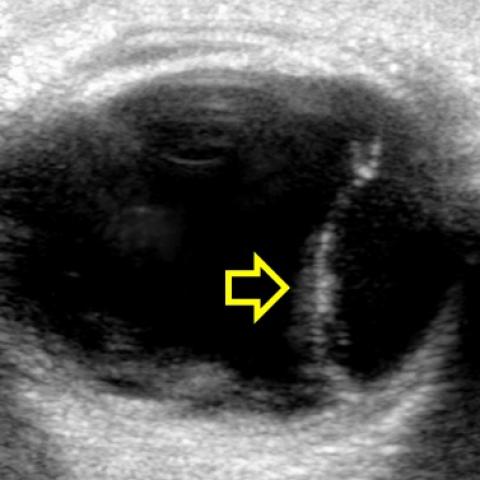 Detachment in the lateral vitreous portion of the patient (yellow arrow) which should not be confused with the hyaloid conduct.
Figure 12 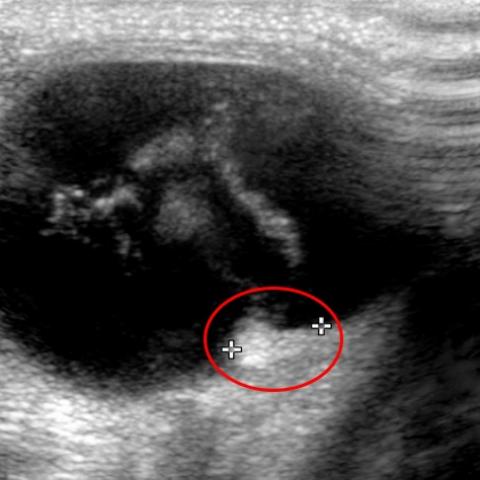 A calcified mass in posterior pole (red circle) is mandatory for retinoblastoma diagnosis. 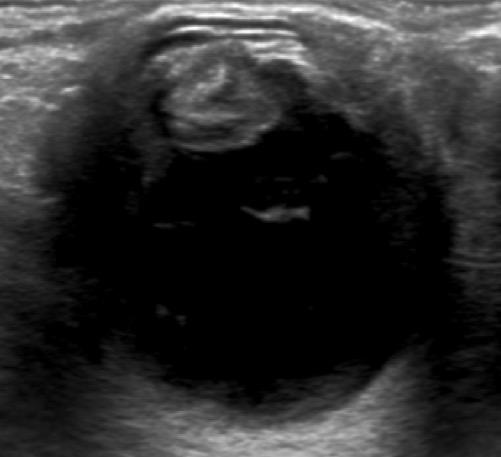 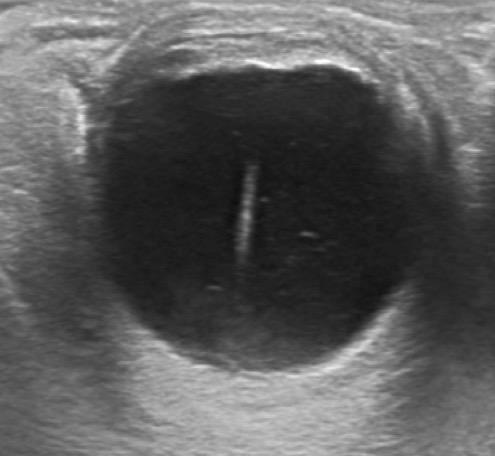 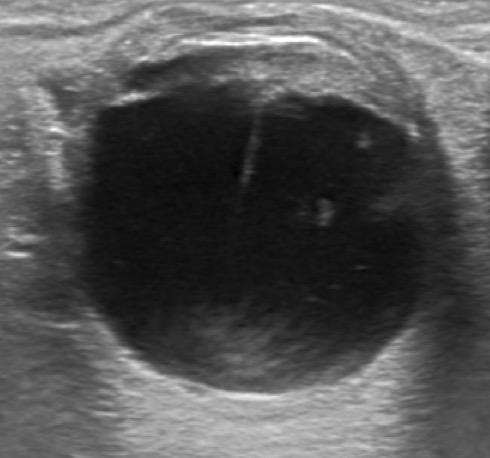 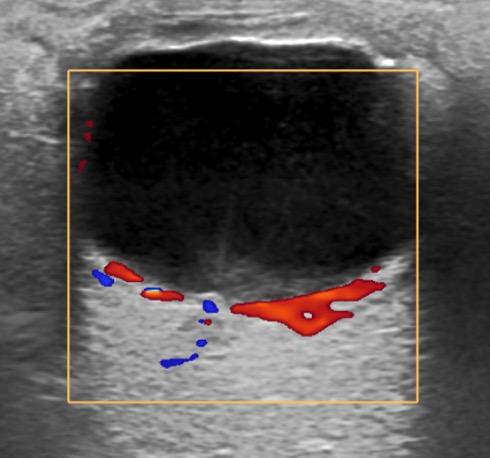 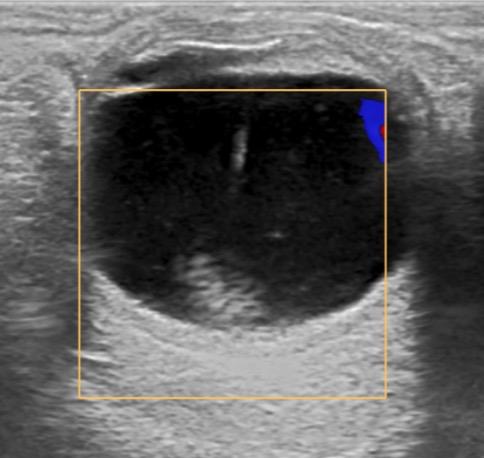 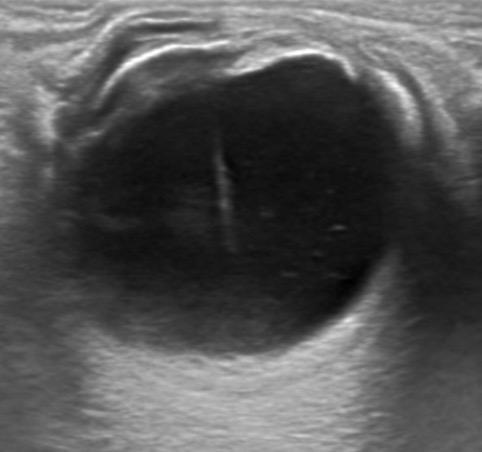 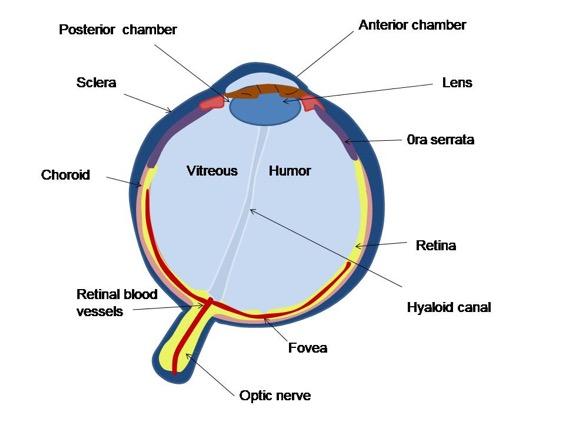 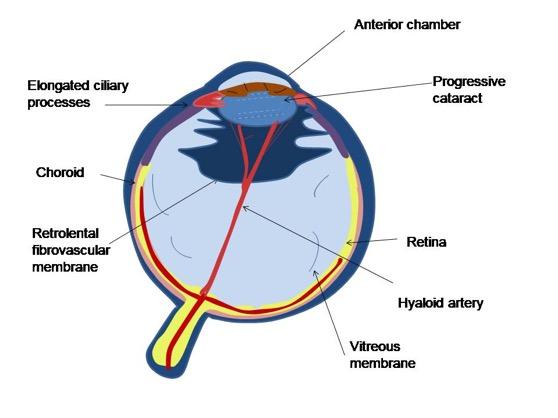 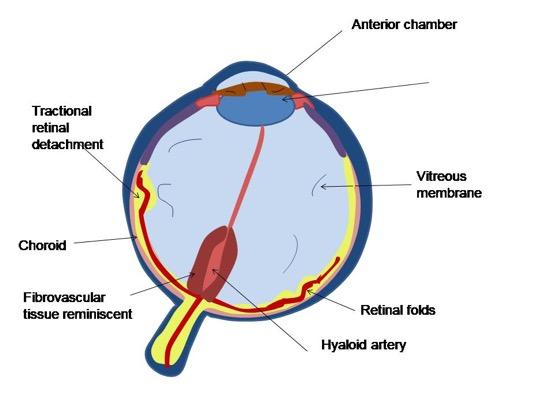 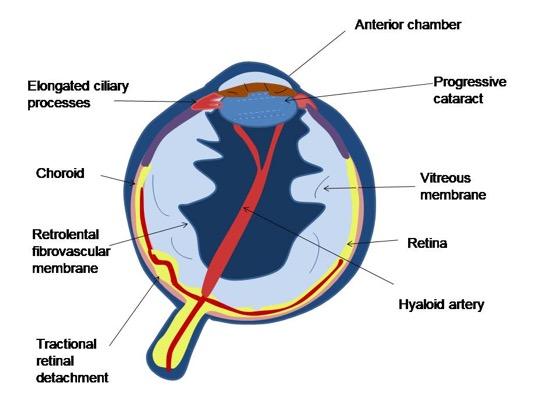 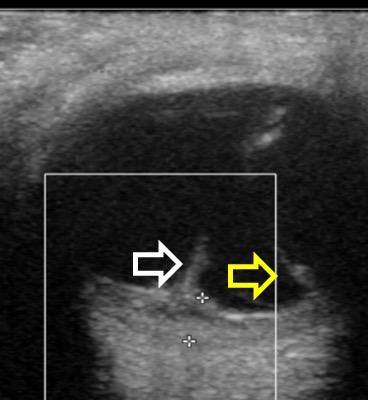 Position in the vitreous chamber is main for differential diagnosis between PHPV, always occupying the hyaloid conduct (white arrow), and any kind of detachment that may appear in any position inside the vitreous as seen at the lateral of the ocular globe in the image (yellow arrow).
Department of Radiology, Hospital Clínico Universitario Virgen de la Arrixaca, Facultad de Medicina Universidad de Murcia/ España 2018 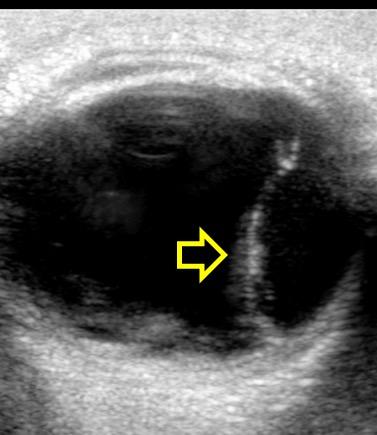 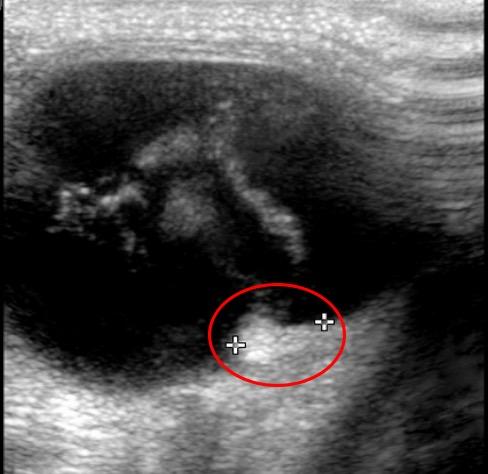