A 36-year-old man presented with chronic productive cough and history of recurrent lower respiratory infections. Physical examination was unremarkable. The patient was non-smoker with no occupational or environmental exposure to respiratory irritants. There was no family history of a similar illness. The results of blood analysis were within normal limits.

A chest radiograph (posteroanterior and lateral views) were initially performed, which revealed tracheobronchomegaly, multiple ill-defined opacities, predominantly in the right-lower lobe, and increased linear opacities, more visible in the left pulmonary base, which represent thickened bronchial walls or tram tracks, due to cylindrical bronchiectasis (Fig. 1). High-resolution computed tomography (HRCT) of the thorax confirmed tracheobronchomegaly, that manifests not only by dilatation of the trachea and bronchi (Figs. 2-5), but also by protrusion of redundant musculomembranous tissue between the cartilaginous rings, resulting in a scalloped appearance of the air columns (Figs. 4 and 5). On axial view, a small diverticulum is also visible in the left wall of the trachea (Fig. 3). Additionally, scattered cylindrical bronchiectasis were identified, some of them with parietal thickening and endoluminal mucoid content (Fig. 6).

Tracheobronchiomegaly, also known as Mounier-Kuhn syndrome (MKS), is a rare condition, characterised by pathological dilation of the trachea and major bronchi with recurrent chest infections [1-5]. It was first described in 1932 by Mounier-Kuhn. [1-4] Aetiology remains unknown, with most cases occurring sporadically, but familial cases have been described with a possible recessive inheritance [4]. Nevertheless, it has been documented an association with Ehlers-Danlos and Marfan syndromes, cutis laxa, Kenney-Caffe syndrome, severe upper lobe fibrosis such as sarcoidosis, cystic fibrosis and others [2-5].

Airway histological examination of individuals with tracheobronchiomegaly demonstrated muscle, elastic, and cartilaginous tissue atrophy, resulting in increased tracheal and main bronchial diameters and mucociliary clearance impairment. Dilatation of the tracheal cartilage rings allows the tissue between them to protrude out of the trachea and central bronchi, leading to diverticula. Such diverticula can be observed in a localised or diffuse manner along the entire length of the central airways, a condition known as tracheobronchial diverticulosis [1-3].

It is mainly observed in men between the 3rd and 5th decade of life. Clinical manifestations are nonspecific and the diagnosis is made radiologically. Patients with MKS are usually diagnosed as having bronchiectasis and chronic bronchitis [2-4]. Pulmonary function tests reveal an enlarged dead space [5]. MKS has three subtypes. In type 1, there is minimal dilation of the trachea and major bronchi; in type 2 there is distinct dilation and diverticula; and in type 3 the diverticula and sacculations extend to the distal bronchi [3,4].

The most frequent imaging findings consist of tracheal and main bronchial dilation and the presence of tracheobronchial diverticula.  The diagnosis of tracheobronchiomegaly is made when the diameter of the trachea exceeds 3 cm, the right main bronchus exceeds 2,4 cm and the left main bronchus exceeds 2,3cm [3,5]. Chest X-ray is able to demonstrate dilation of the trachea and main bronchus, but CT better assesses pathological complications, including bronchiectasis, fibrosis, emphysema, and recurrent infections [1-3]. Additionally, dynamic inspiratory and expiratory series should be conducted to demonstrate commonly associated tracheobronchomalacia, with respiration-dependent collapse of the trachea and bronchi.

Asymptomatic patients do not require treatment, but smoking cessation is encouraged. In symptomatic patients, treatment is usually conservative with antibiotics, physiotherapy and postural drainage. Surgical treatment by resection or stenting usually is not used due to widespread nature of disease [1-4].

[3] Vishnukanth Govindaraj, MadhusmitaMohanty Mohapatra, Balla Nagamalli Kumar, and Suryakala Narayanasami (2016) Tracheobronchomegaly as a Cause of Bronchiectasis in an Adult. Case Reports in Pulmonology Volume 2016. (PMID: 27022496). 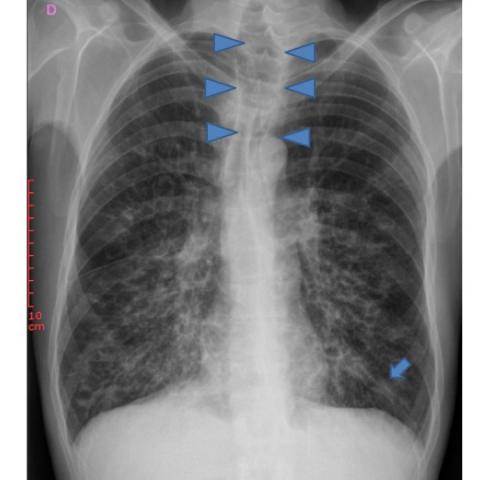 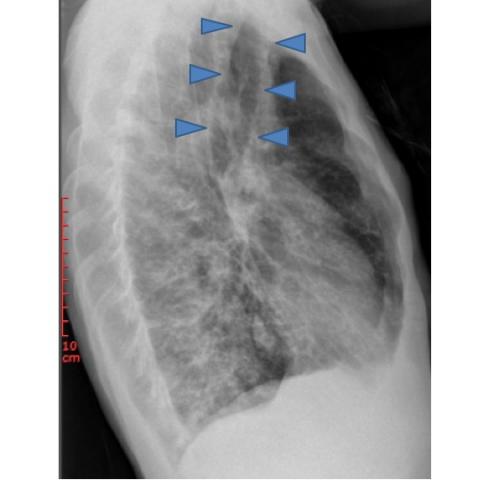 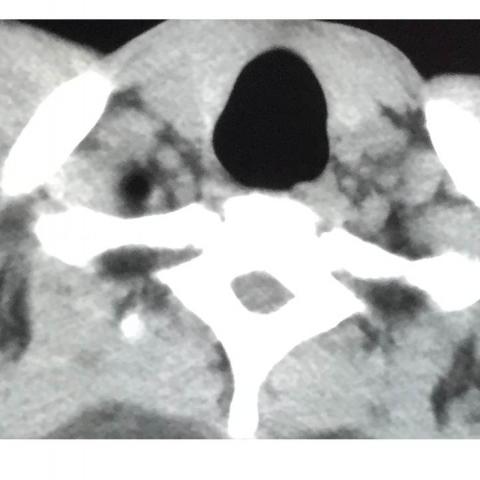 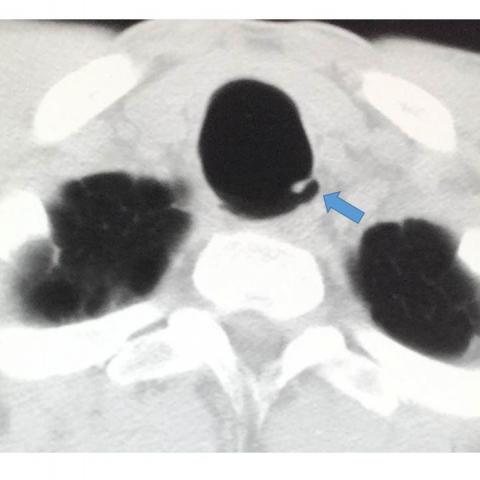 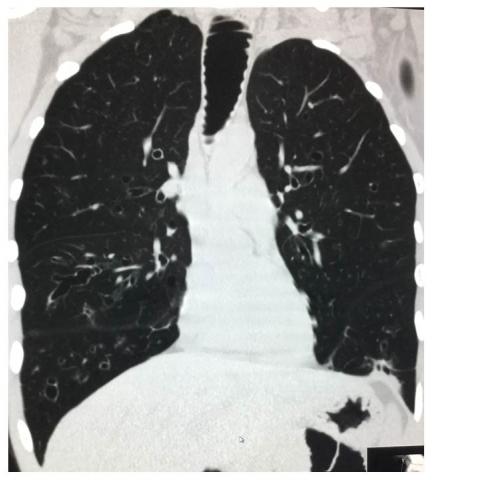 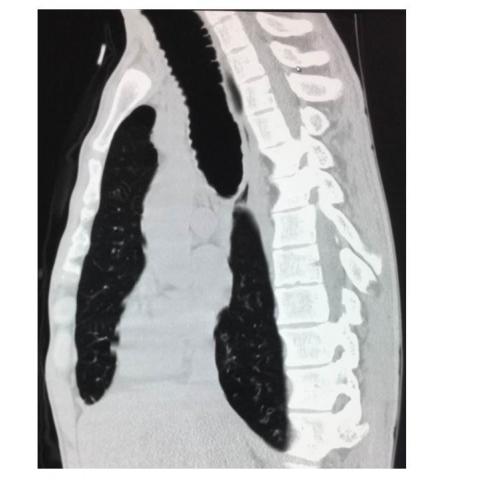 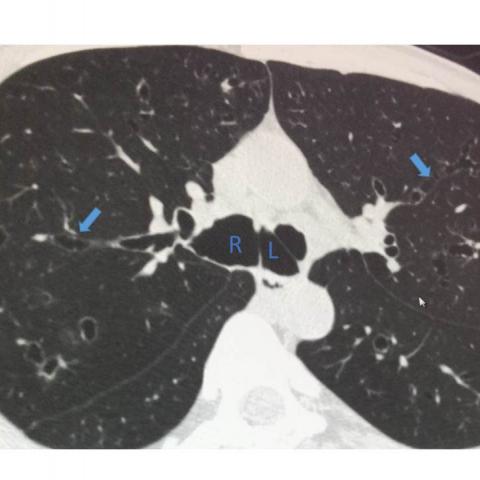 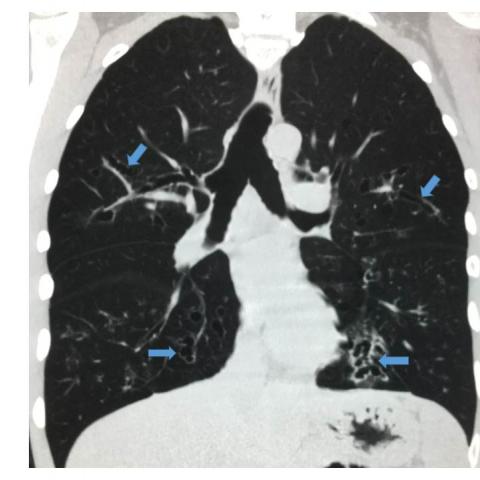 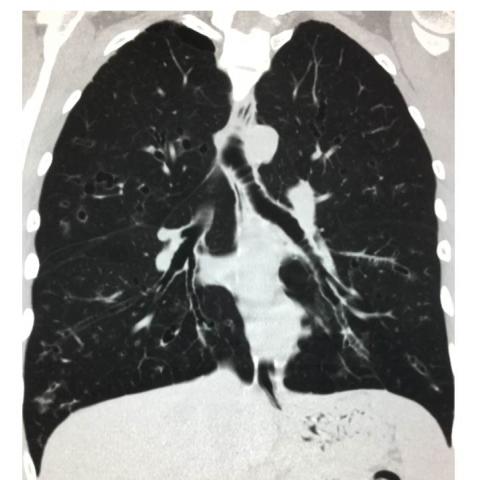 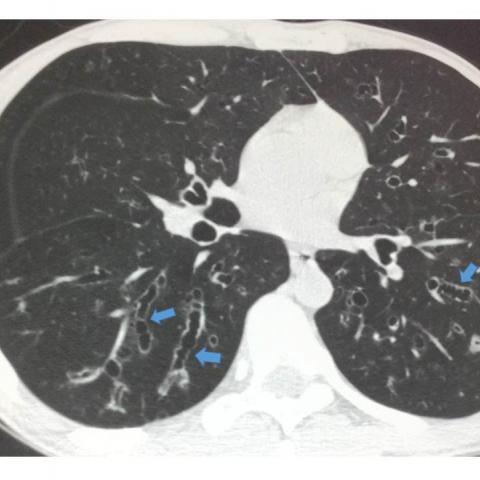 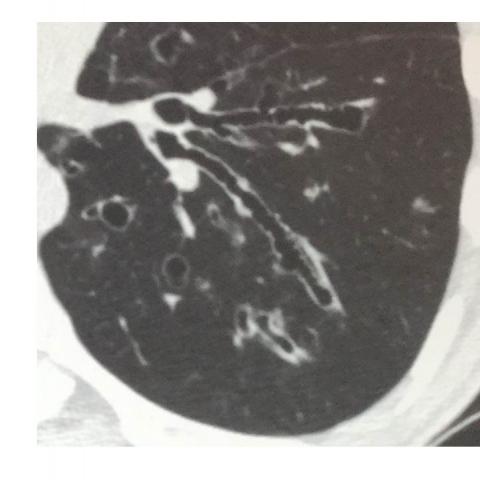 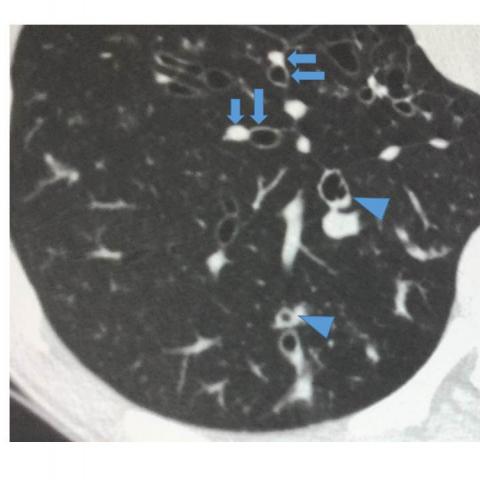 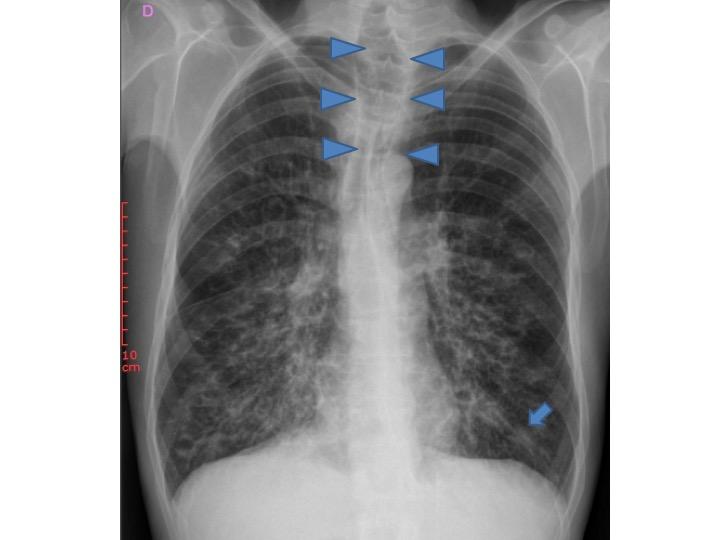 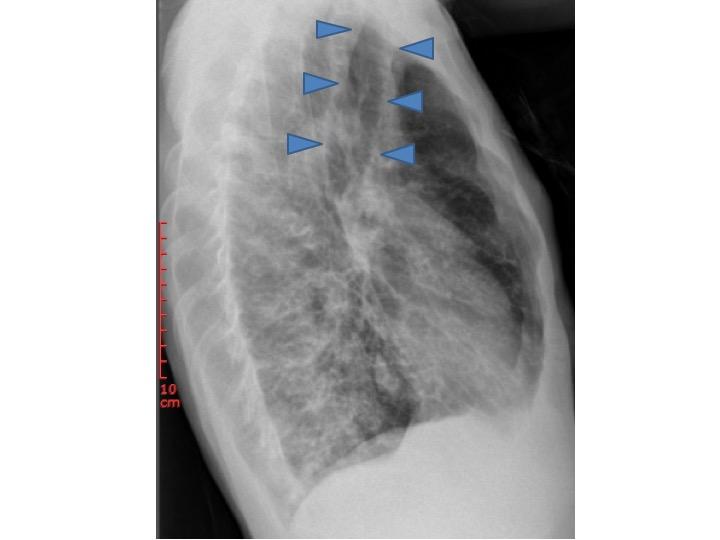 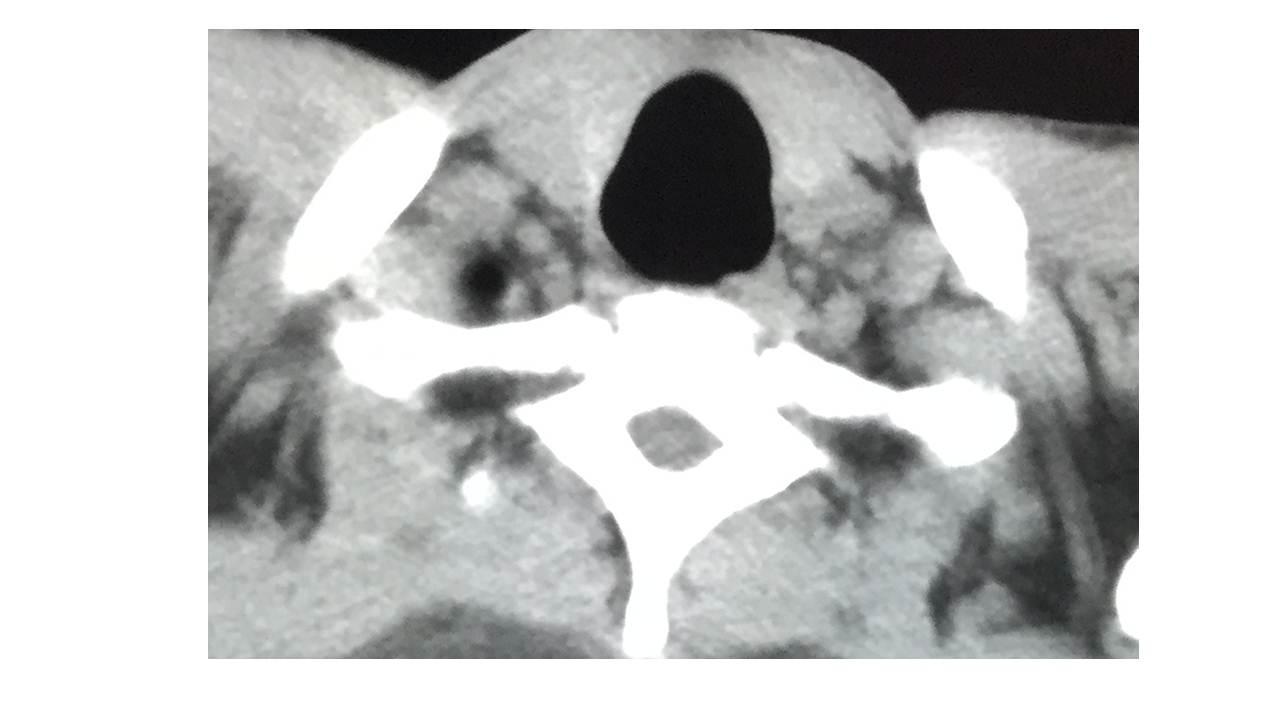 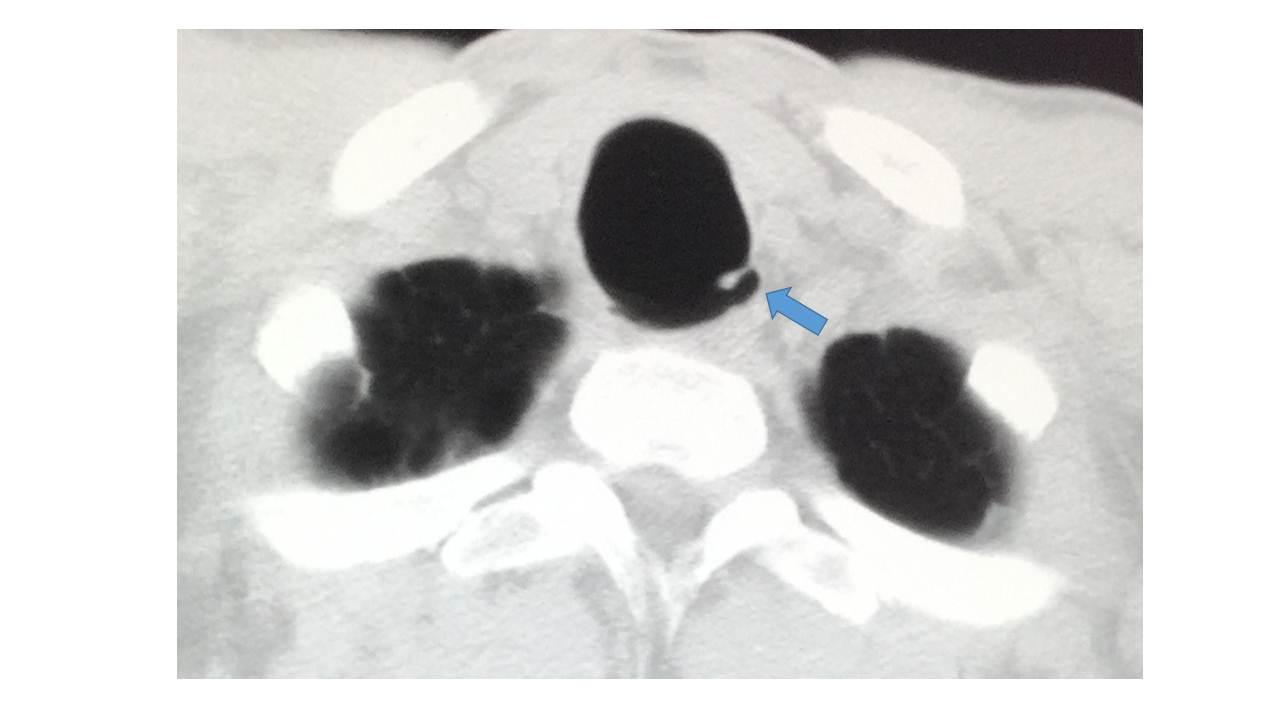 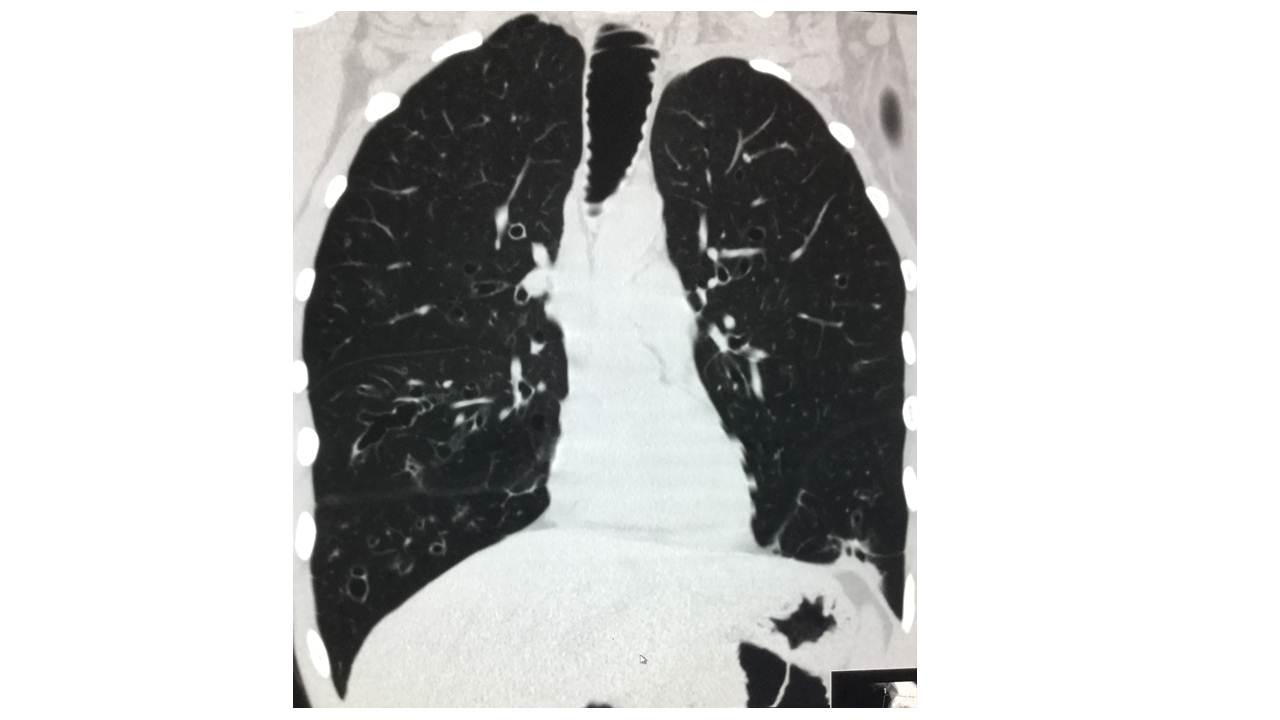 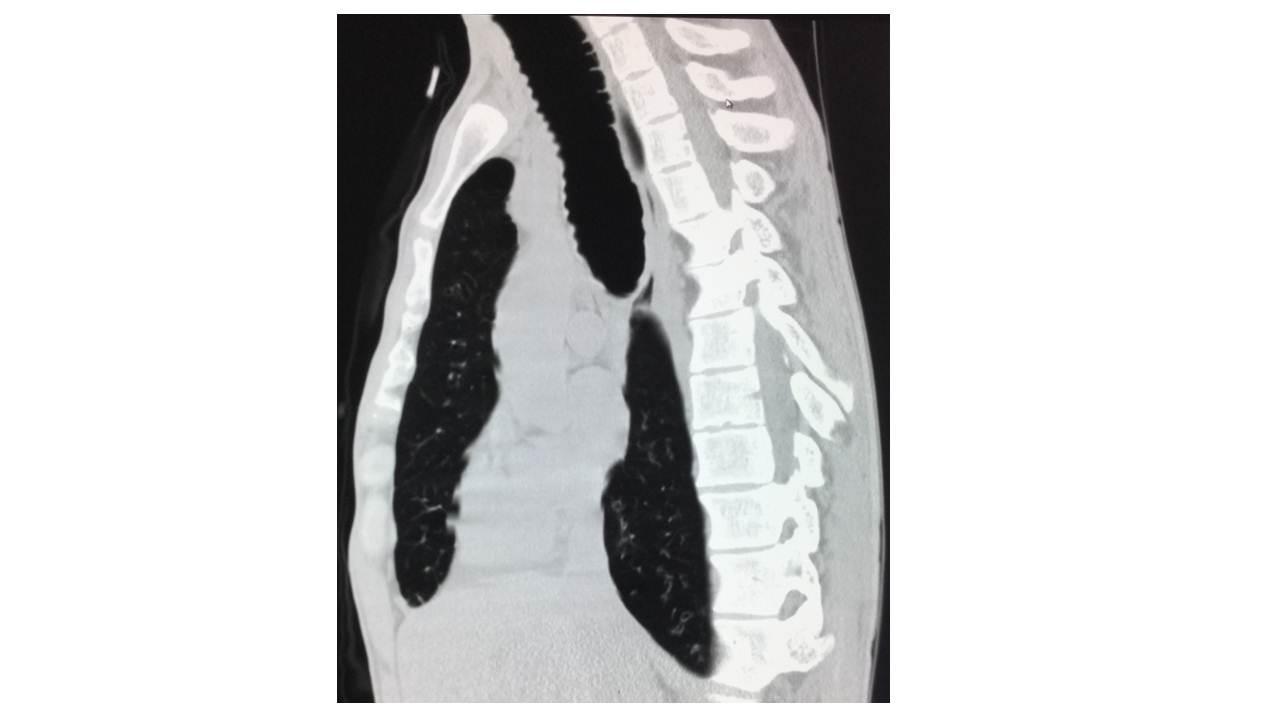 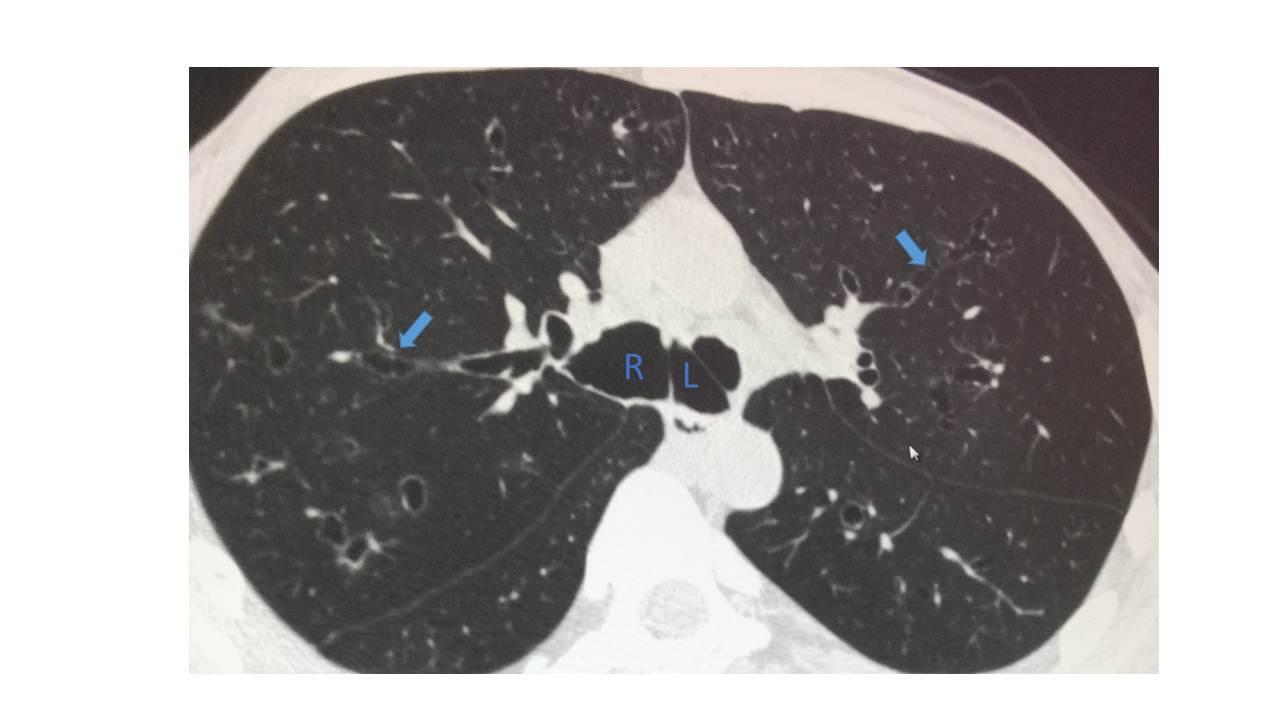 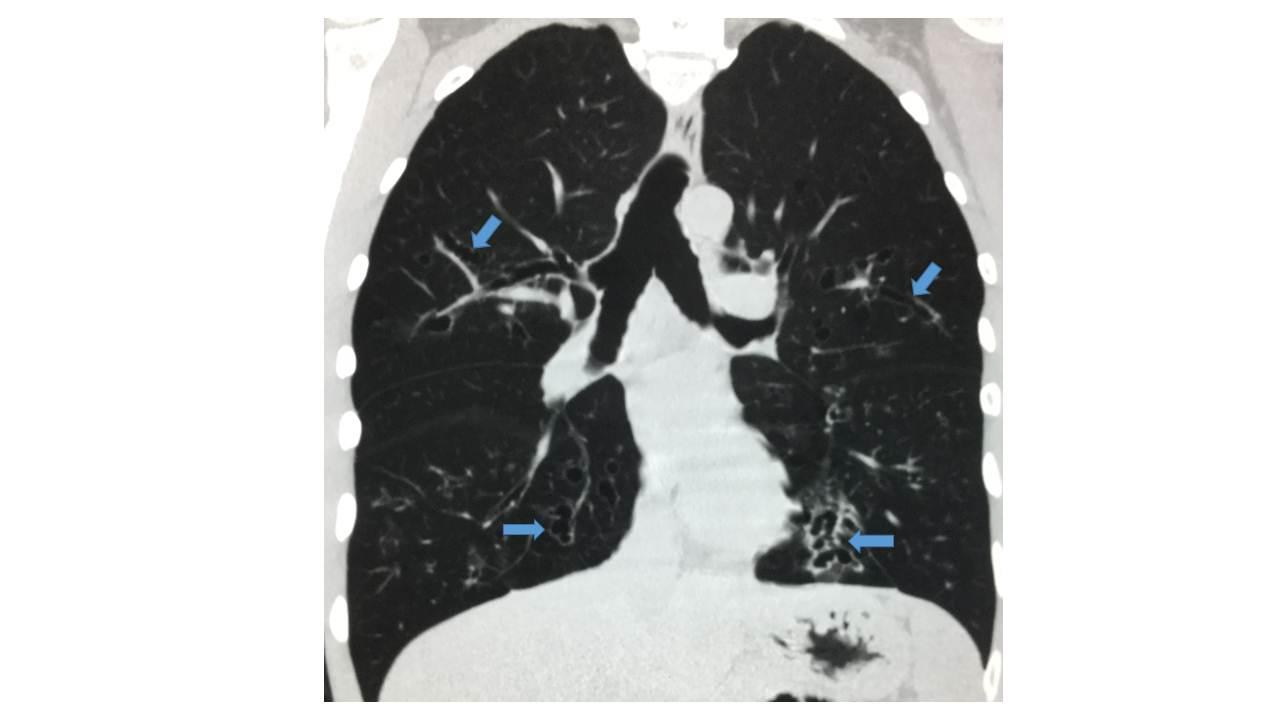 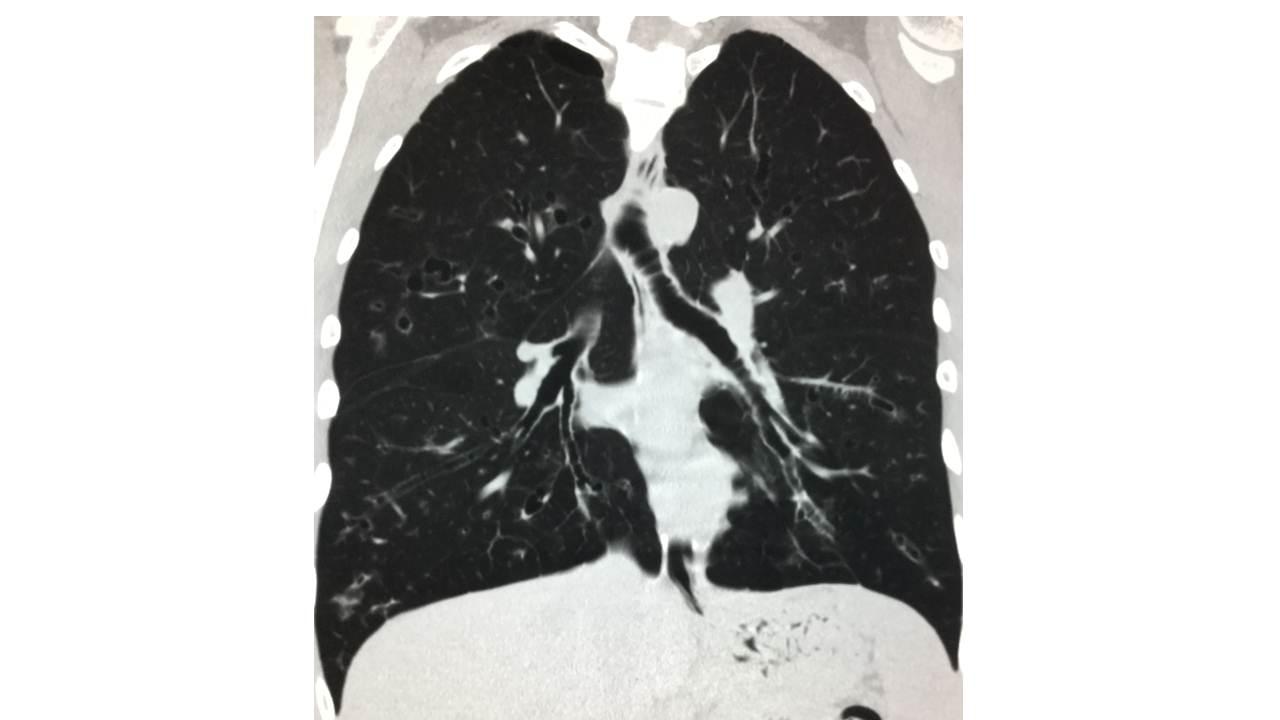 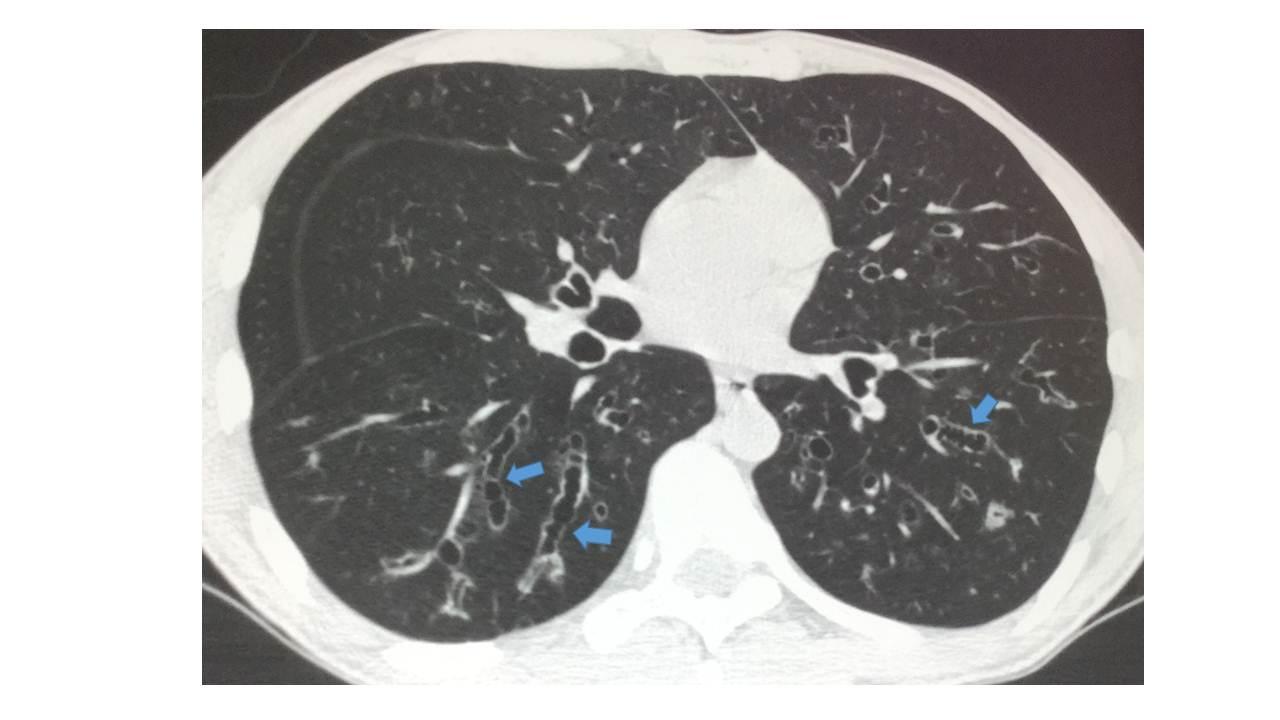 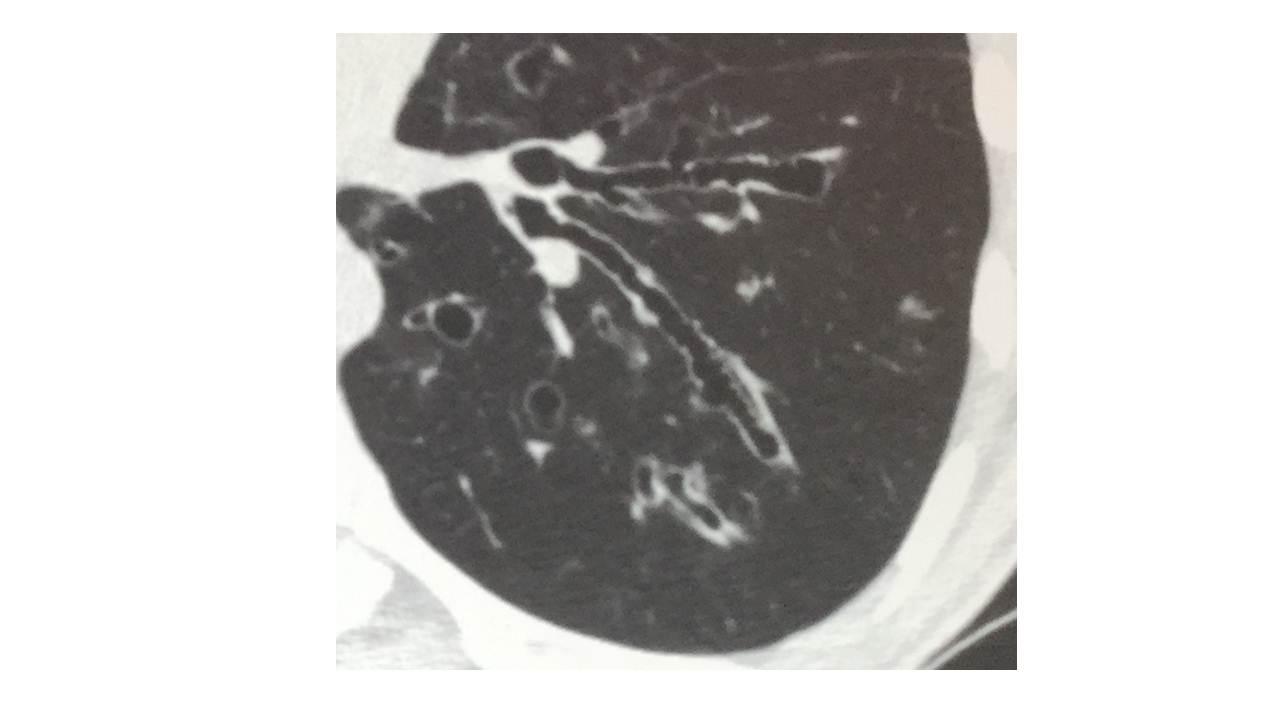 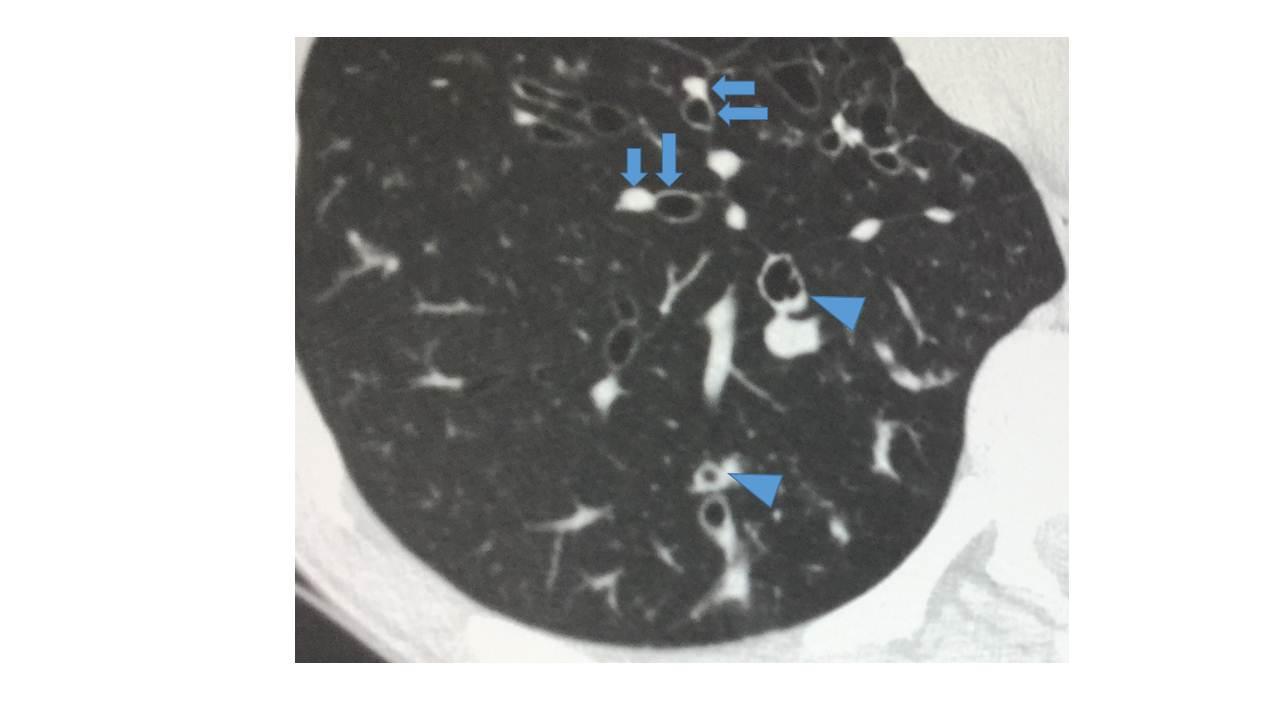