30-year-old primiparous female with 7 months of amenorrhoea presented to the obstetric department for first ever antenatal checkup. Obstetric examination and routine investigations were done, all were normal. The patient was sent for ultrasonography.

On MRI the same findings were confirmed.

The patient underwent induction of labour and the fetus was delivered.

Neural tube defects (NTDs) constitute one of the most common malformations with incidence of approximately 0.5-2/1000 pregnancies worldwide [1].

Exencephaly is a rare fetal anomaly in which the skull vault is absent (acrania), however, residual brain tissue is present which floats freely in amniotic fluid. It is a precursor to anencephaly and not compatible with extra-uterine life [2].

The aetiology of NTDs involves both genetic and environmental factors, however, most cases are sporadic. Increased risk of NTDs is associated with maternal folate deficiency and elevated homocysteine suggesting involvement of genes for folate and methionine metabolism. This fact is also supported by the reduction of NTDs by up to 60-70% following maternal periconceptional folate administration [1].

On ultrasound in case of exencephaly symmetrical absence of the cranial vault is noted. Rudimentary brain tissue (area cerebrovasculosa) is covered by a membrane [6]. In encephalocele a juxtacranial mass and in most instances a bony defect can be observed after 10 weeks. If the mass is cystic, the meningocele component predominates, while a solid mass indicates predominantly encephalocele [3]. Polyhydramnios usually develops in the second trimester due to absent or ineffective fetal swallowing [6].

MRI is usually not used as ultrasonography usually detects this anomaly very early, but sometimes ultrasonography does not enable an accurate diagnosis. In that case MRI is necessary as it can detect complex anomalies [2].
Most of NTDs are either lethal or disabling and require early termination [3].

Take home message:
As most of NTDs are lethal or disabling a timely detection helps in early termination of such unwanted pregnancies and ultrasonography plays a significant role in early diagnosing fetal CNS anomalies. 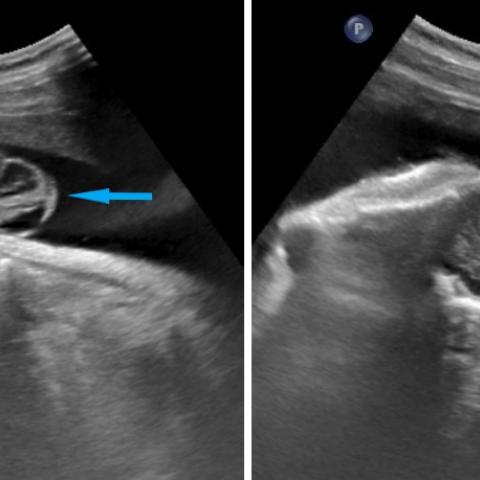 There is a defect in the posterior part of the skull vault (vertical arrow) through which brain parenchyma herniates (transverse arrow).
Figure 2 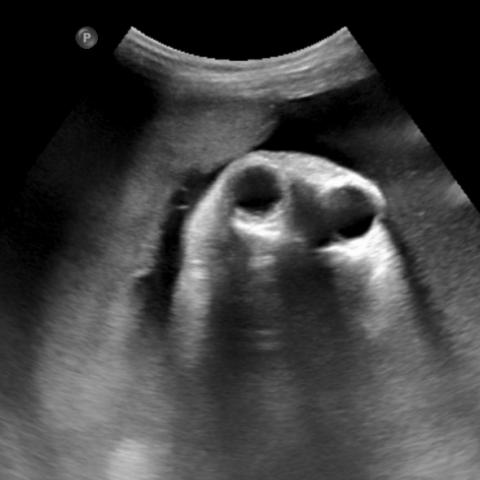 There is bulging of eyeballs (frog eye appearance).
Figure 3 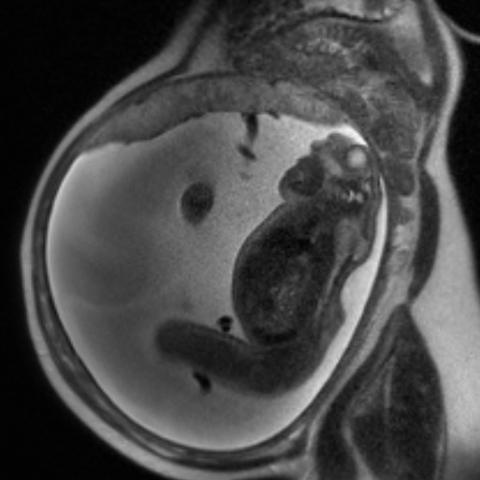 On MRI T2-weighted imaging there is bulging of eyeballs with no parenchymal tissue above the orbit. However, some brain tissue is present in the occipital region suggestive of exencephaly.
Figure 4 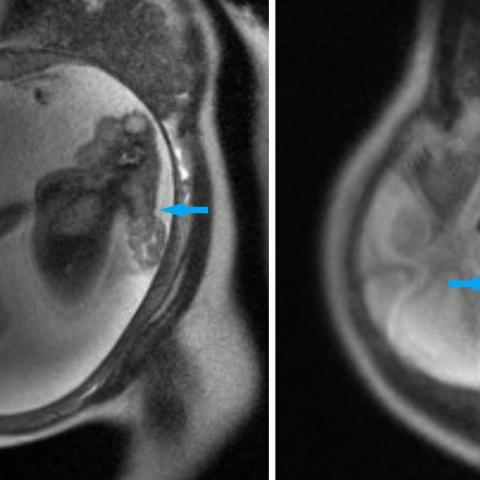 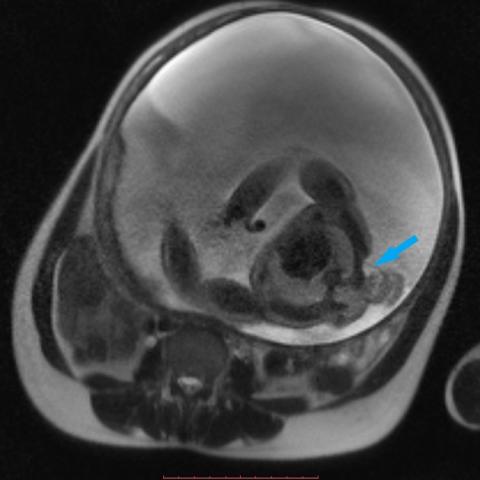 T2-weighted imaging showing a defect in the posterior arch of the upper cervical vertebra (blue arrow) through which brain tissue herniates. 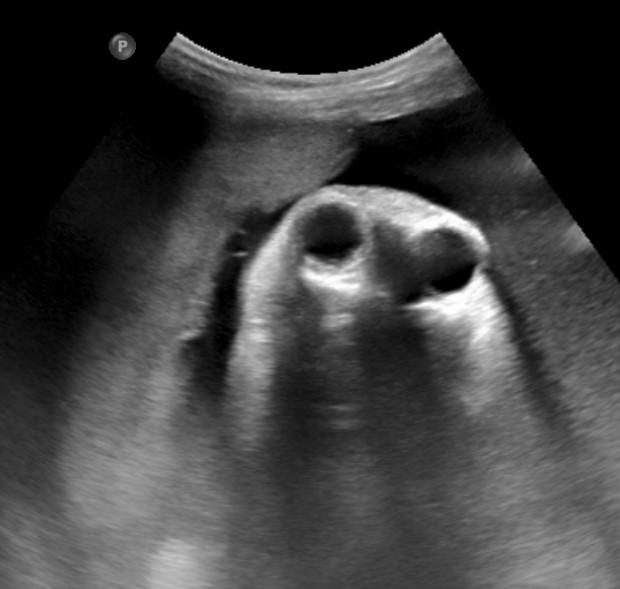 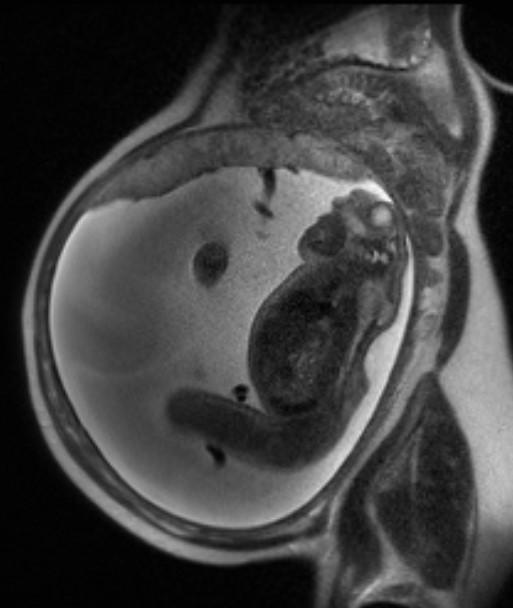 On MRI T2-weighted imaging there is bulging of eyeballs with no parenchymal tissue above the orbit. However, some brain tissue is present in the occipital region suggestive of exencephaly.
© Department of Radio diagnosis, G. G. Hospital, M. P. Shah Medical College, Jamnagar, India 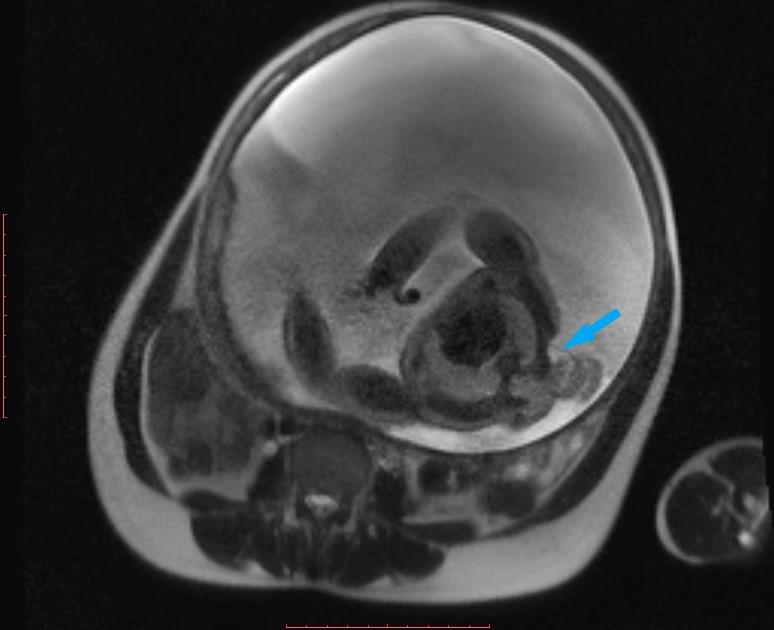