Sonographically (Fig. 2), the mass corresponded to an arcuate hyperechogenicity with posterior acoustic shadowing. To clarify these MR and ultrasound appearances, noncontrast CT (Fig. 3) was then performed: the mass showed internal gas bubbles and moderately thick wall with draped hyperattenuating structures: the latter was well depicted by maximum-intensity-projection reconstructions (Fig. 3c-e) and corresponded to the metallic marker of a retained surgical sponge. Surgery (Fig. 4) confirmed the diagnosis of postoperative gossypiboma, without abscess formation.

Regarding pathophysiology, the retained sponge may elicit two forms of foreign body reaction, either an exudative inflammation causing the formation of abscess or fistula or a slow fibrous aseptic reaction leading to adhesion, granuloma and encapsulation. As a result, some gossypibomas manifest with septic course early (within weeks or a few months) after surgery, conversely, others remain asymptomatic and may be diagnosed even years or decades later. At any time, manifestations are nonspecific such as abdominal pain or distension, bowel obstruction, vomiting and palpable mass [1, 2, 4, 5, 6].

From the imaging perspective, the diagnosis is straightforward when the sponge marker is radiographically detectable as a curved or banded radio-opaque line. CT represents the ideal first-line technique in the early postoperative period: gossypibomas generally appear as heterogeneous masses with a dense periphery and internal "spongiform" appearance containing air bubbles. The fabric pattern (best appreciated on lung window) and wavy high densities (corresponding to the marked sponge itself) are very characteristic. The differential diagnosis versus abscesses relies on geometric shape and fixed position of gas bubbles. Compared to CT, the diagnosis is challenging on ultrasound, where gossypibomas may appear as cystic or complex lesions with "wavy" internal echoes and hypoechoic ring; posterior acoustic shadowing is generally prominent. Very few reports exist about MRI findings, which vary depending on composition, stage and fluid content. As in our case, gossypibomas appear as well-demarcated soft-tissue masses: the central portion is either hyperintense on both T1 and T2-weighted sequences from the serosanguinous fluid, or hypointense reflecting poor liquid content. A "whorled" internal configuration may represent gauze fibres, but markers have poor MRI signal and are therefore easily unrecognised [2, 4, 5]. 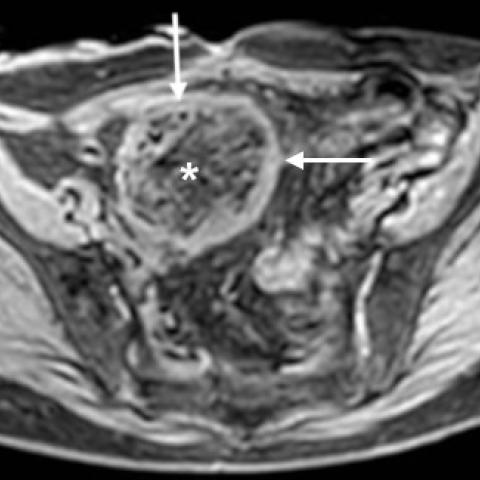 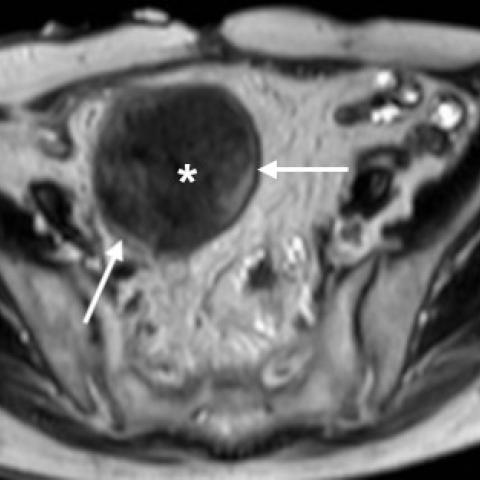 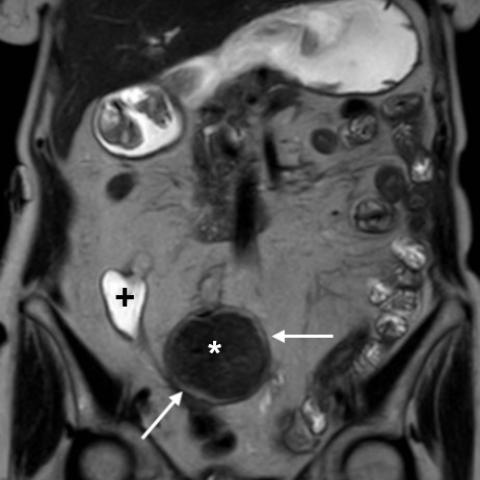 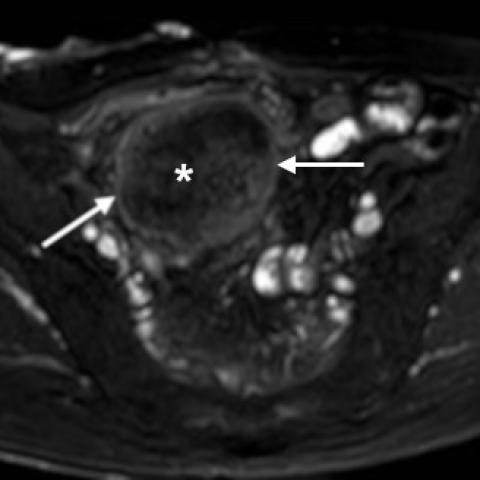 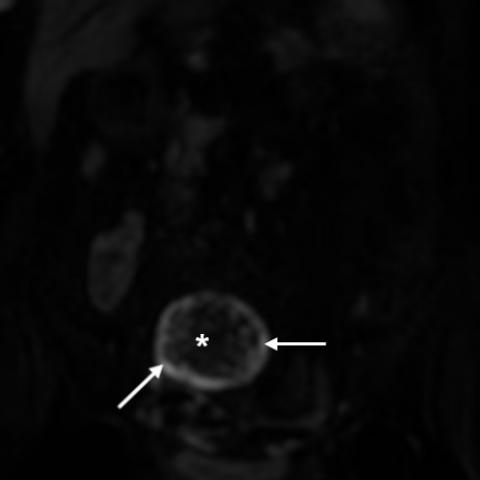 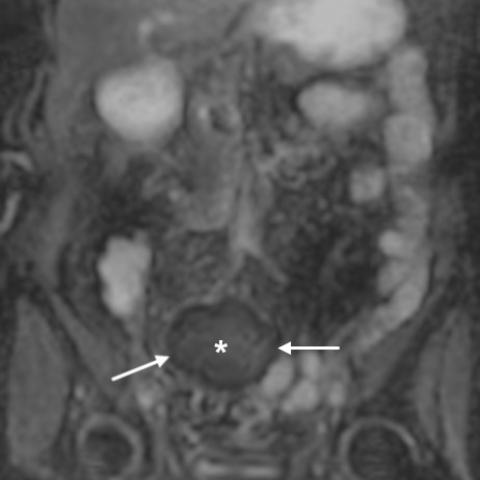 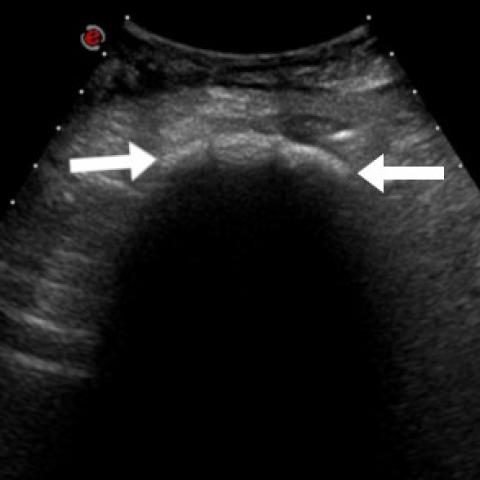 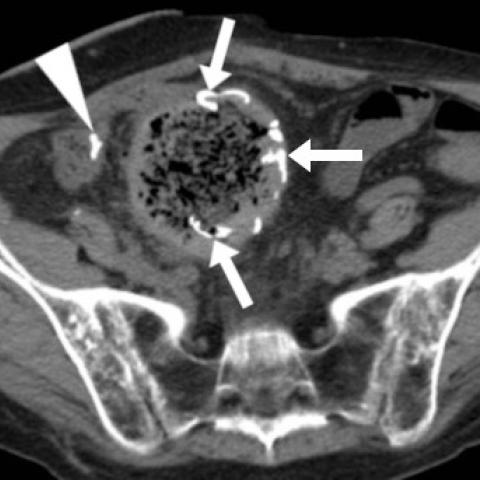 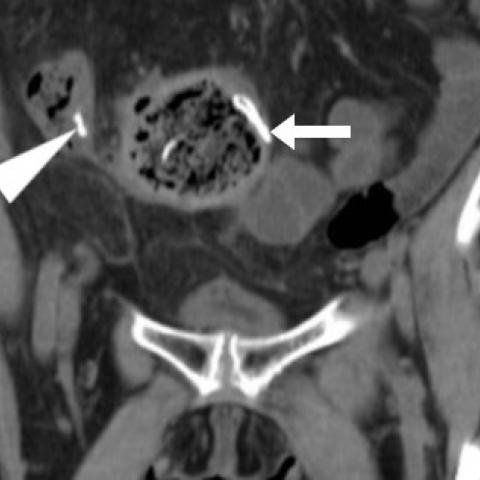 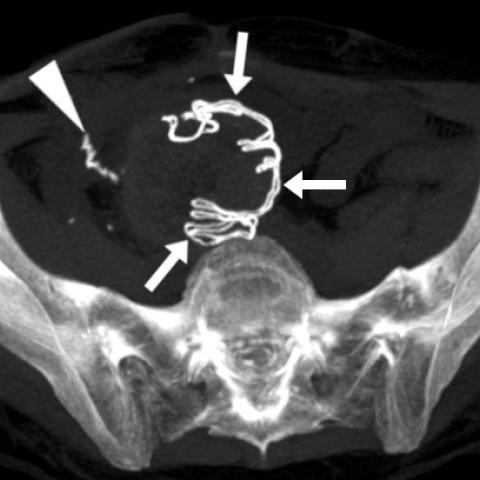 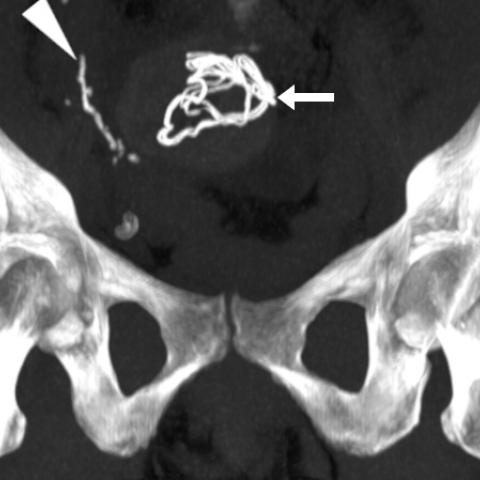 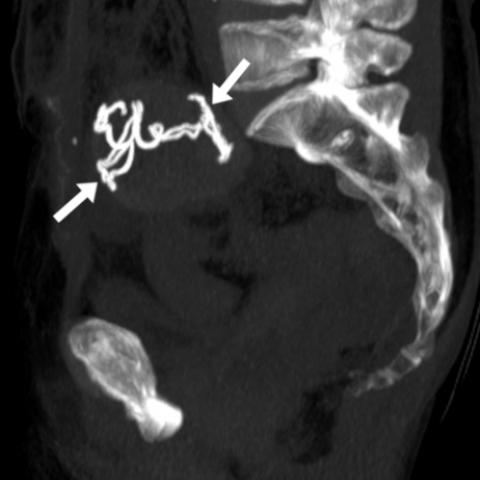 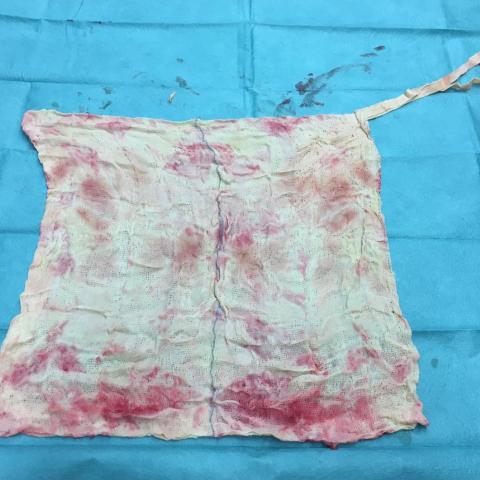 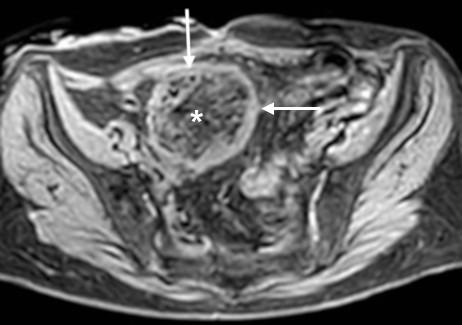 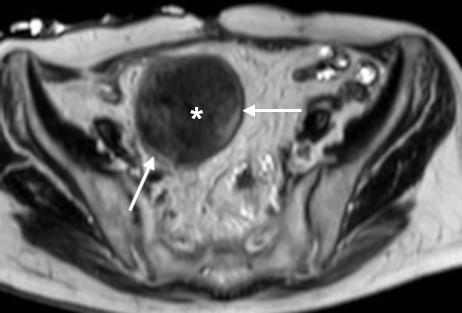 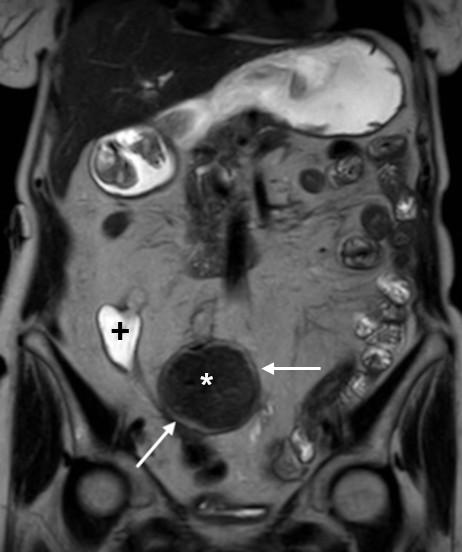 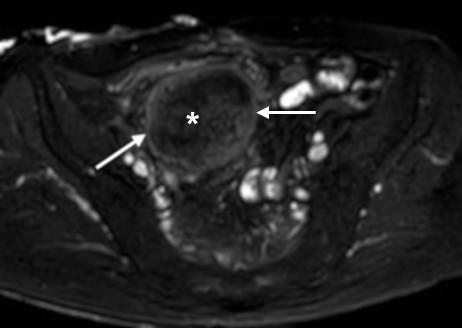 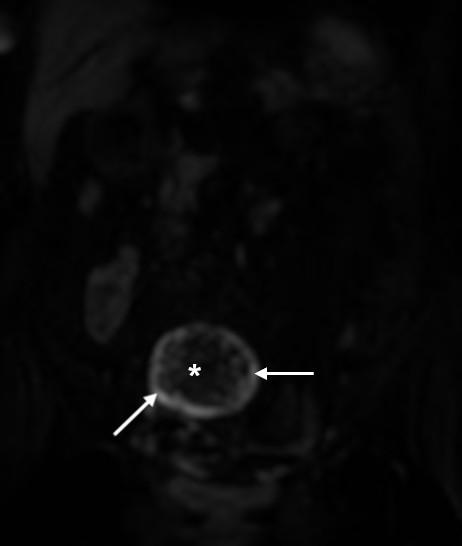 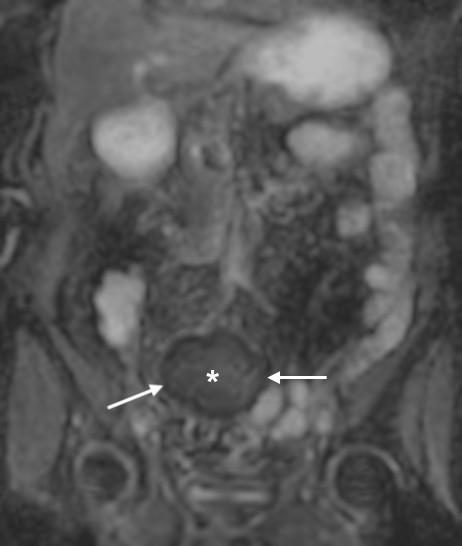 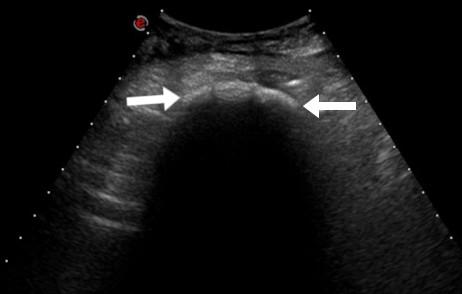 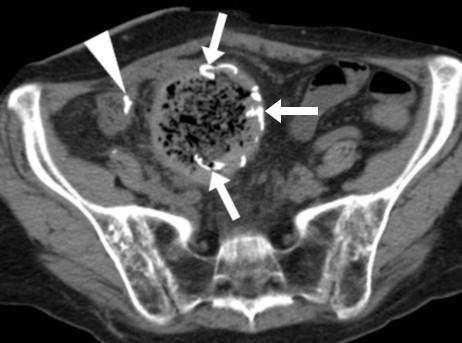 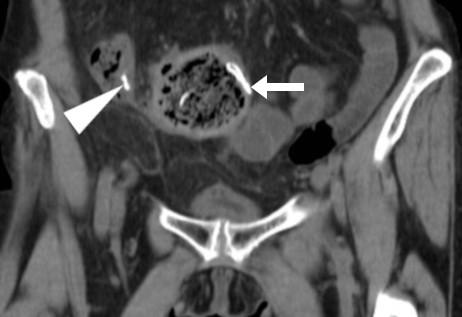 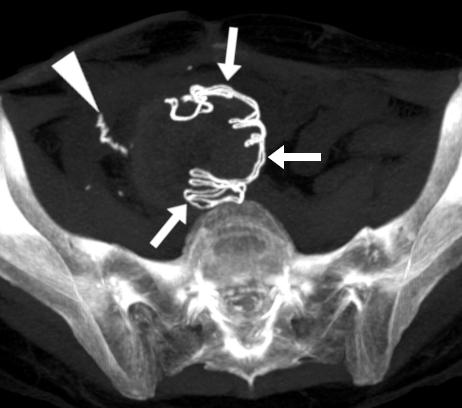 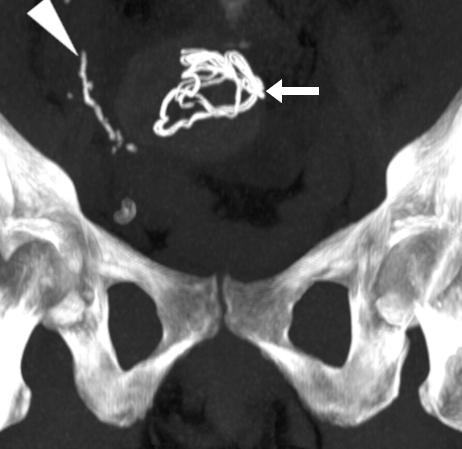 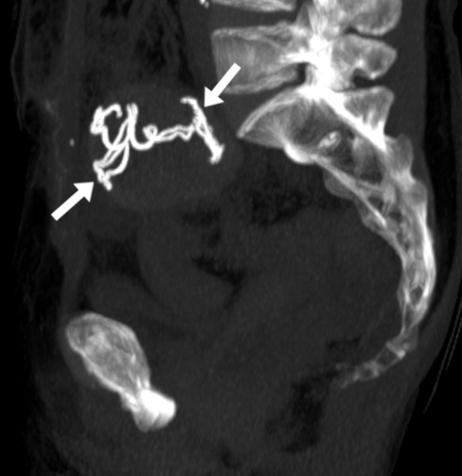 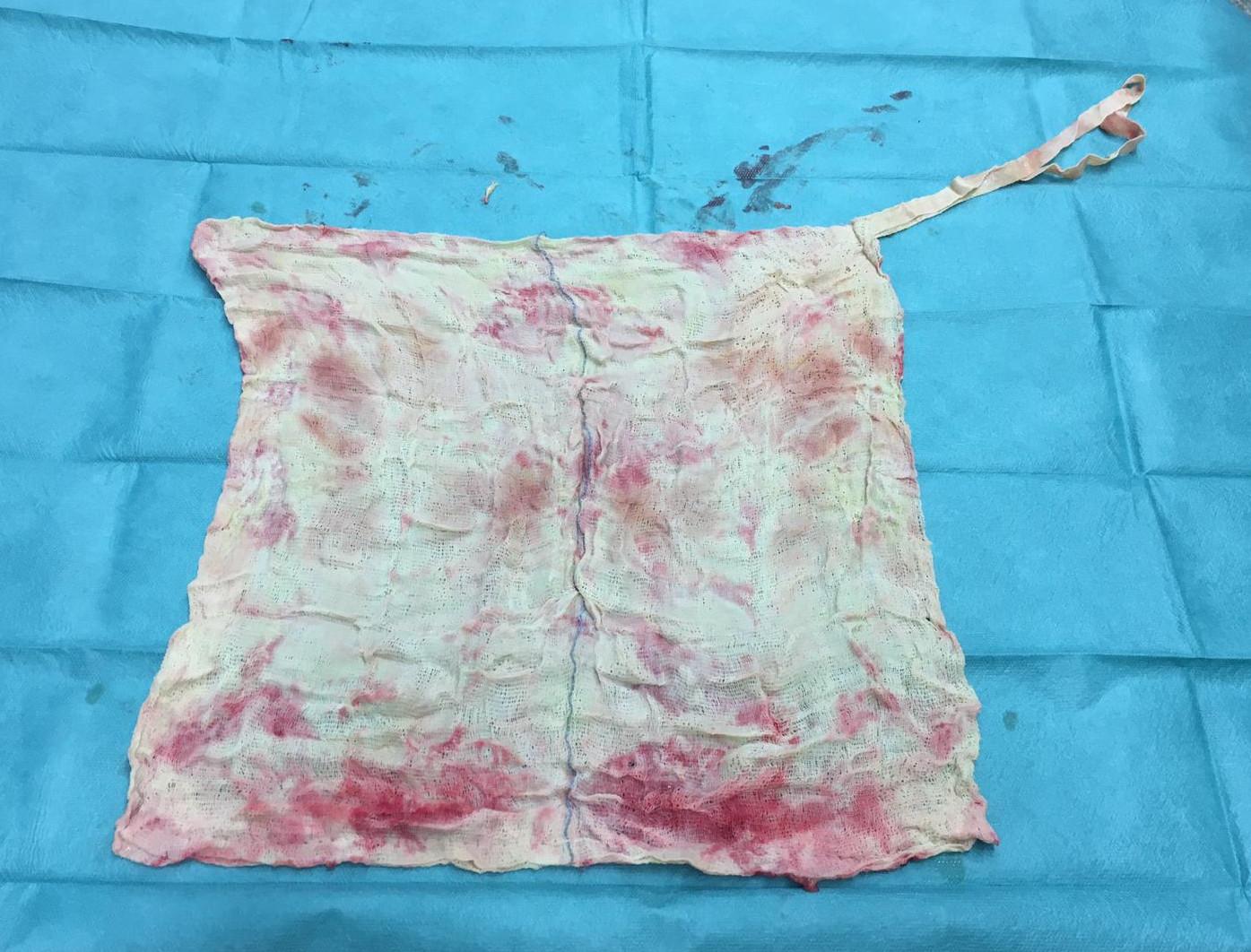