Categories
Area of Interest Ear / Nose / Throat ; Imaging Technique CT
Procedure Diagnostic procedure ; Special Focus Congenital ;
Show more Show less
Download as PDF Print Show related cases Notify admin
Clinical History
A 20 year old female presented with gradually increasing pain in neck, hoarseness of voice and coughing. On physical examination trachea and larynx was very low in position and tracheal rings were not palpable. The Adams apple was prominent and left vocal cord was paralyzed.
Imaging Findings
Contrast enhanced computed tomography (CT) scan of chest was performed which showed normal scan of chest. However, scanned portion of neck showed low lying larynx with mild deviation towards left side, prominent thyroid cartilage, hyoid bone situated at the level of C5 vertebra, vocal cord situated at C6-C7 vertebrae and cricoid cartilage at the level of D1 vertebra.
Discussion
Laryngoptosis is defined as an abnormally low position of larynx since birth. It can be either extreme laryngoptosis, where no tracheal rings are palpable or mild to moderate form where tracheal rings are palpable to various degrees. Developmental deficiency is the chief cause of congenital variety. The larynx is highest during the fetal life, begins to lower further as the pregnancy progresses till birth and gets relatively lower in position during the period of growth [1]. The larynx is present between the second and the third cervical vertebrae during childhood whereas adult larynx is localized on the fifth cervical vertebra [2].

The respiratory system develops from the primitive pharynx. When the embryo is 3.5 weeks old, the laryngotracheal sulcus develops in front of primitive larynx which ultimately forms larynx, trachea and esophagus. By 28 weeks of gestation, the larynx develops entirely [1]. Soon after birth, larynx displaces down and attains its normal position [1, 2]. There is no definite criteria regarding the level of displacement of larynx to be called as laryngoptosis. Few reported cases stated laryngoptosis whenever the tracheal rings are not palpable. The larynx may be present just above the manubrium sterni or even behind it[1, 3] .

The exact pathophysiology of congenital laryngoptosis is still unknown. Reported cases shows some significant anatomical changes. Dayal and Singh [1], Tucker [4], Jackson [5] and Muslow [6] all have reported the displacement of the hyoid bone a lower position with short thyrohyoid membrane. Majority of reported cases had tracheal deviation towards left side and no tracheal rings were palpable. Anatomical variation could be either short sternohyoid muscle [1] or a fibrotic band pulling this muscle causing hoarseness of voice.

Congenital laryngoptosis is a developmental anomaly. There is no evidence of any known predisposing factors. Acquired laryngoptosis may be a sign of pulmonary emphysema which is associated with downward displacement of diaphragm together with the connected mediastinal structures such as tracheal and larynx [7]. Congenital laryngoptosis doesn’t require corrective surgery until it is symptomatic which is caused by shortening of hyoid muscles. Tracheostomy may be needed for the patients with laryngoptosis who have breathing difficulty. 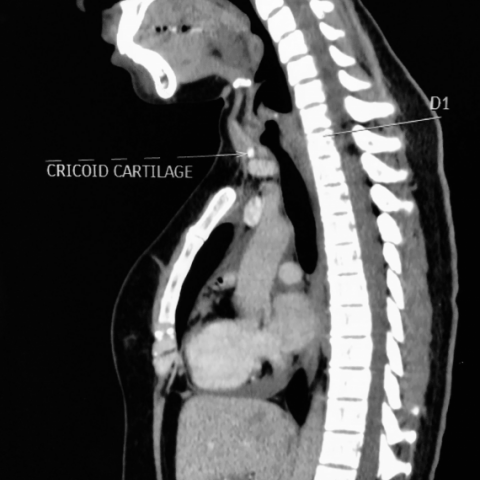 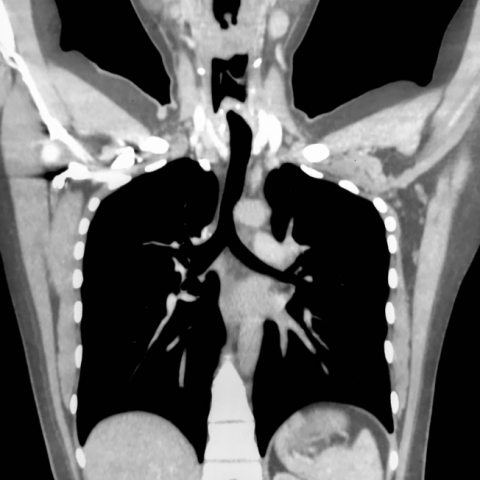 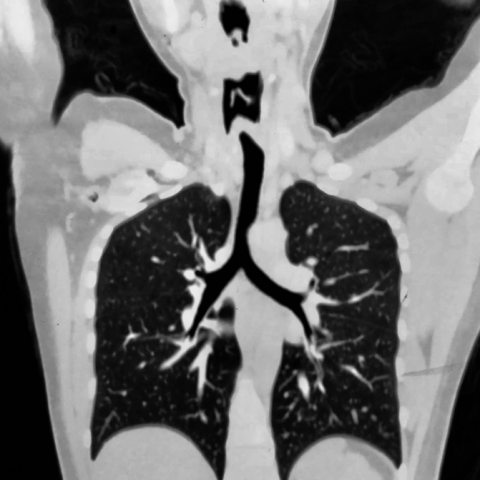 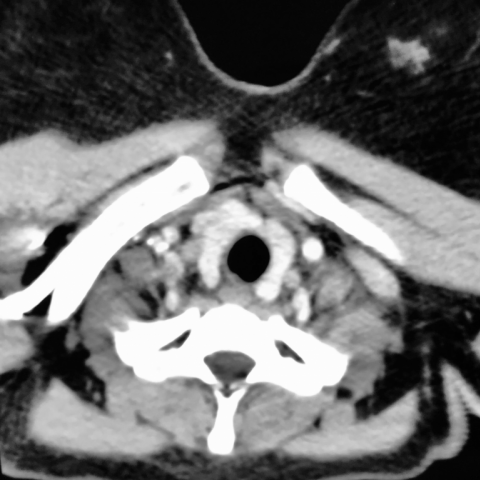 At level of thyroid gland
Figure 5 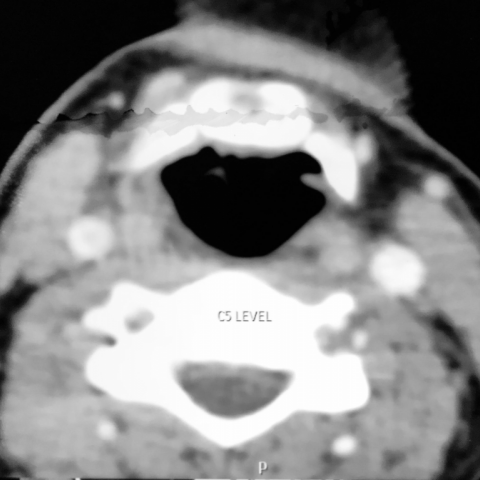 At the level of C5 vertebra 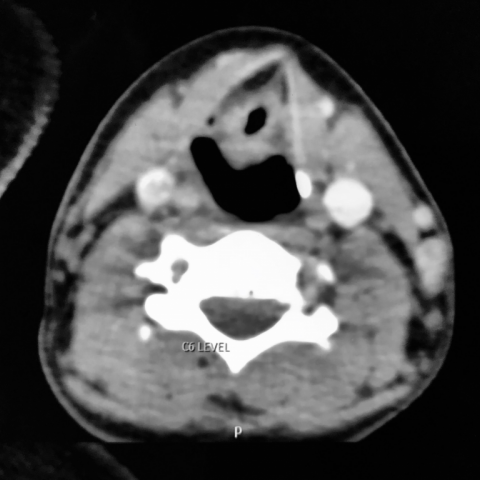 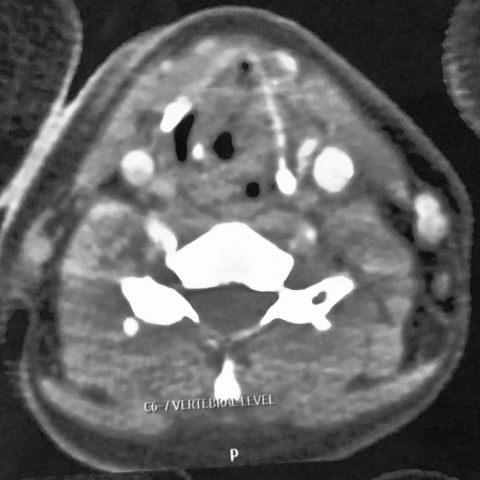 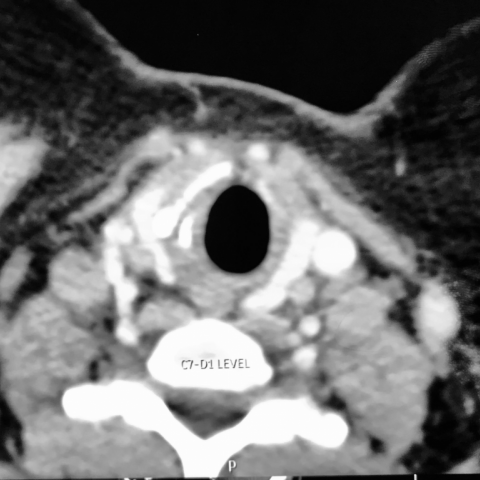 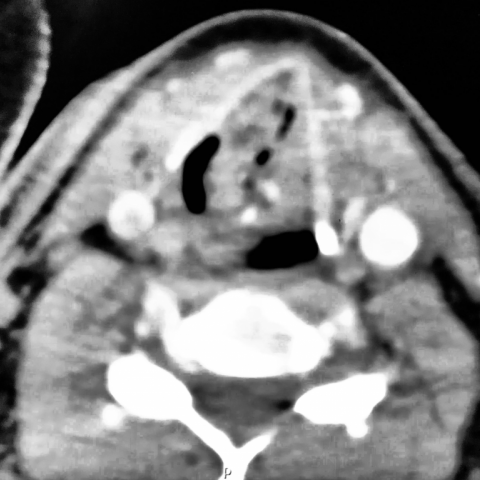 At the level of Vocal cord 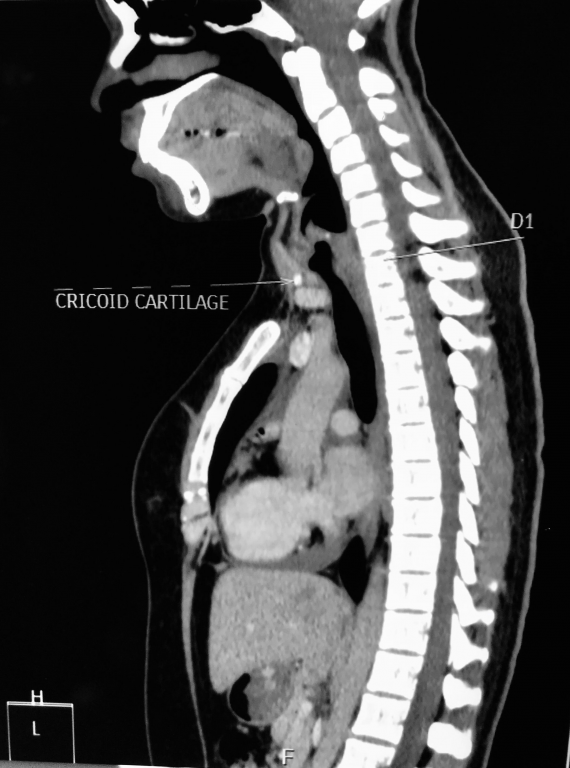 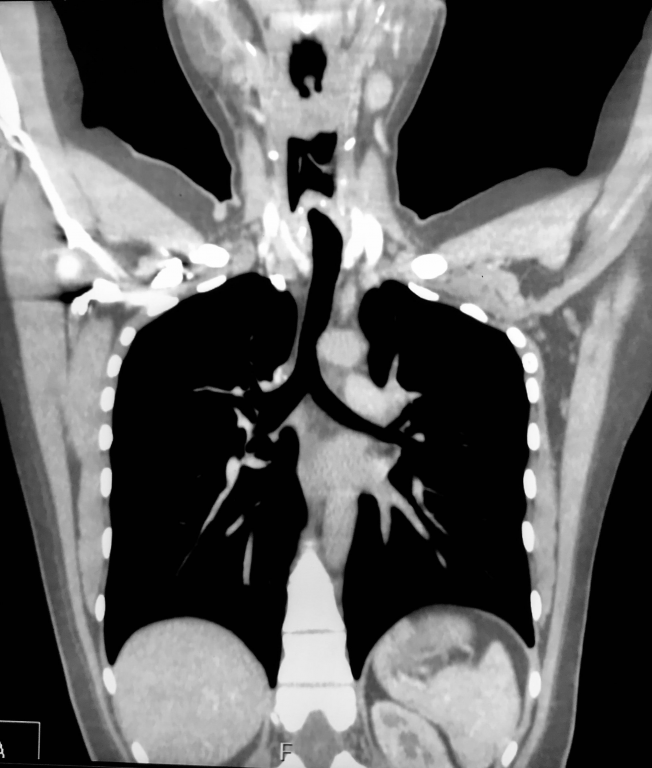 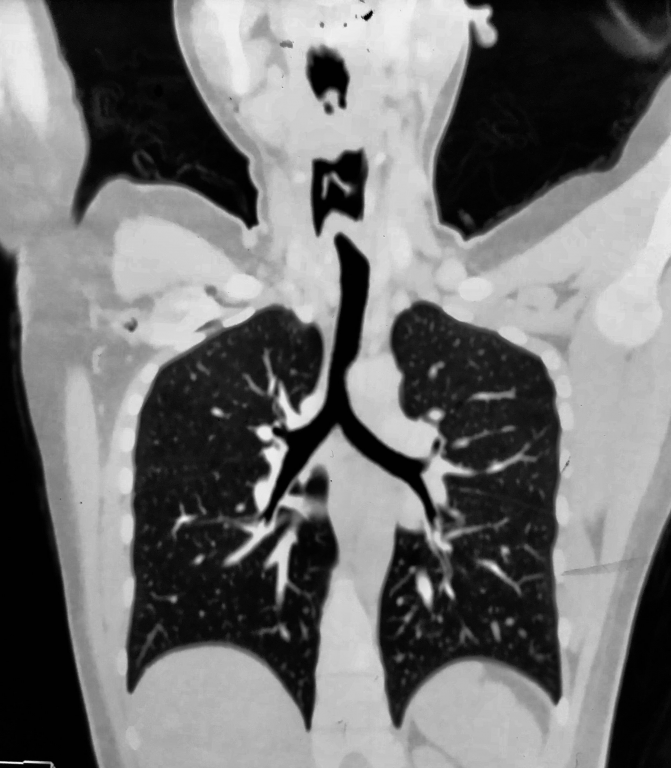 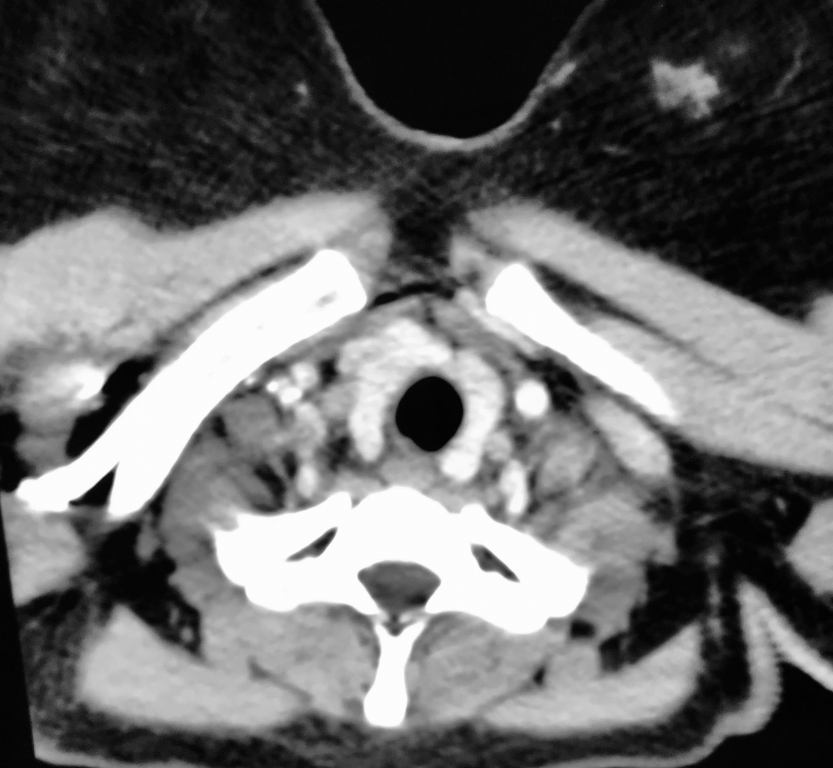 At level of thyroid gland
Department of Radiology & Imaging, BSMMU 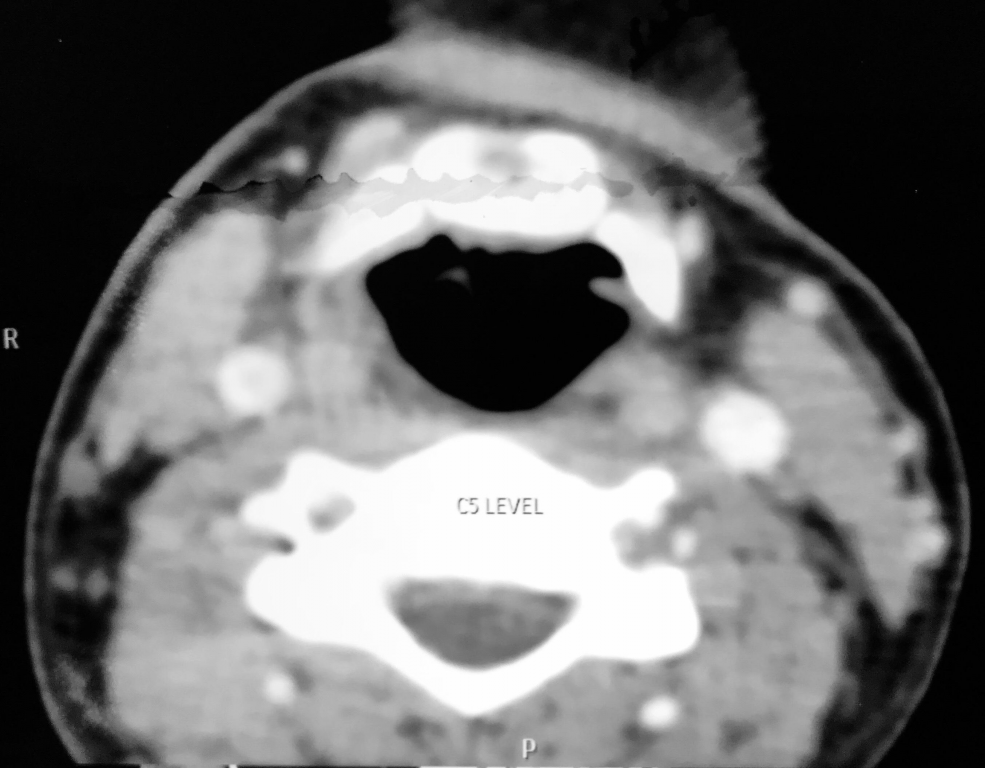 At the level of C5 vertebra
Department of Radiology & Imaging, BSMMU 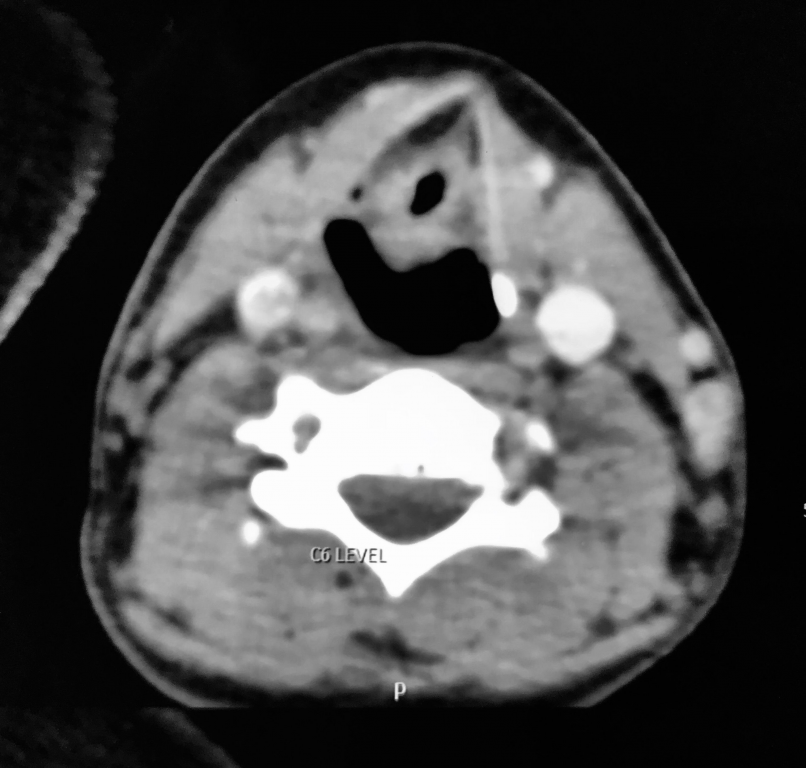 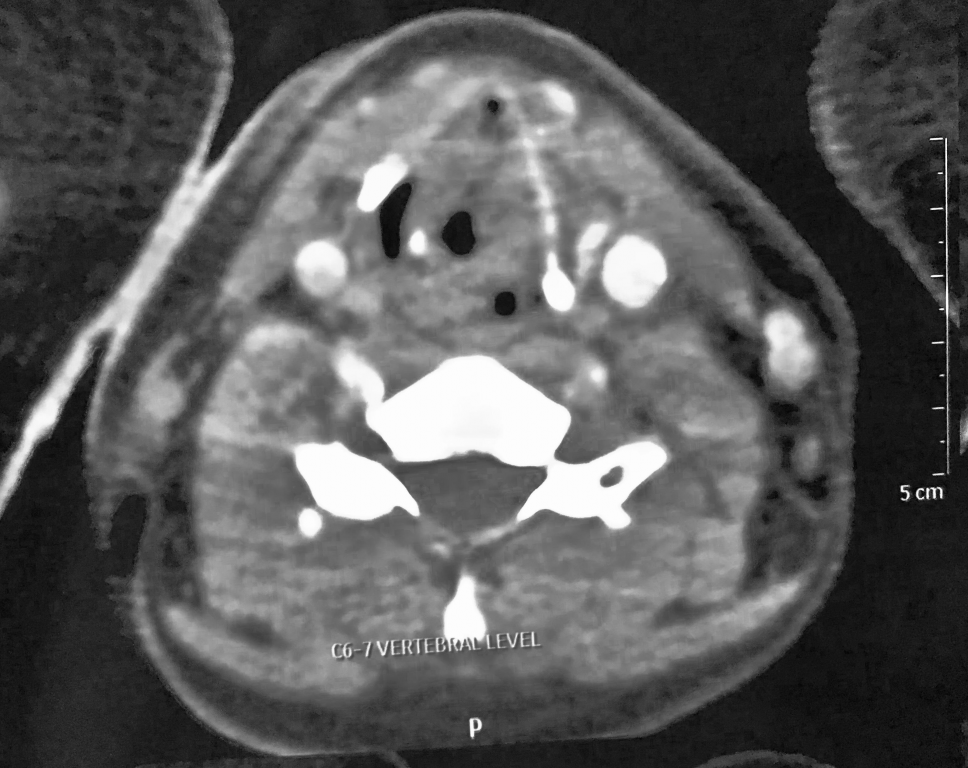 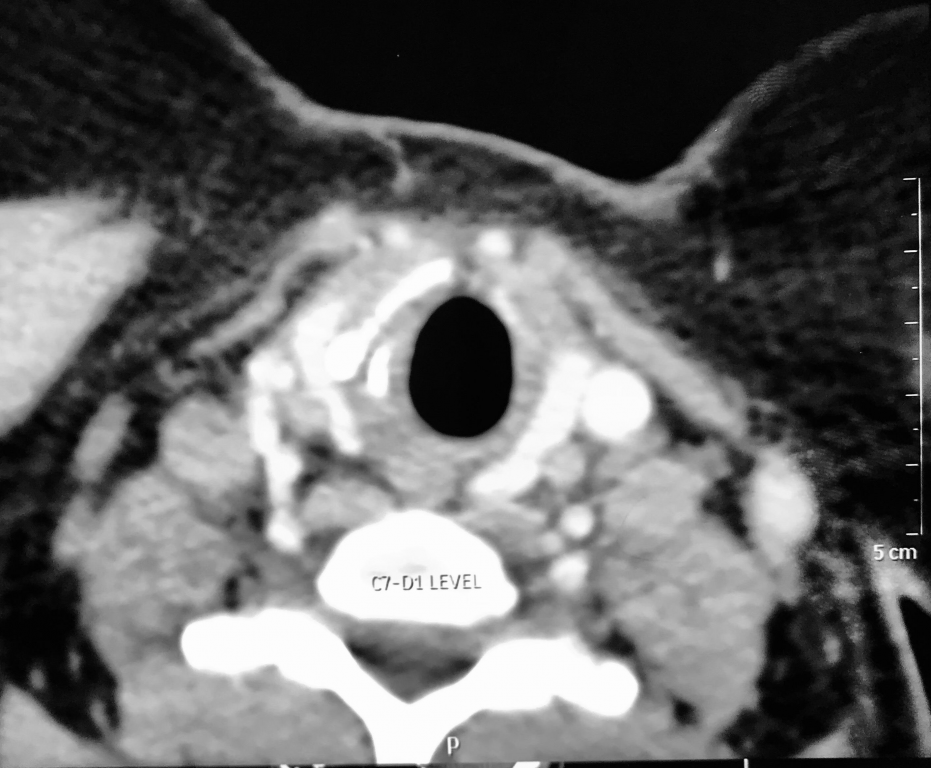 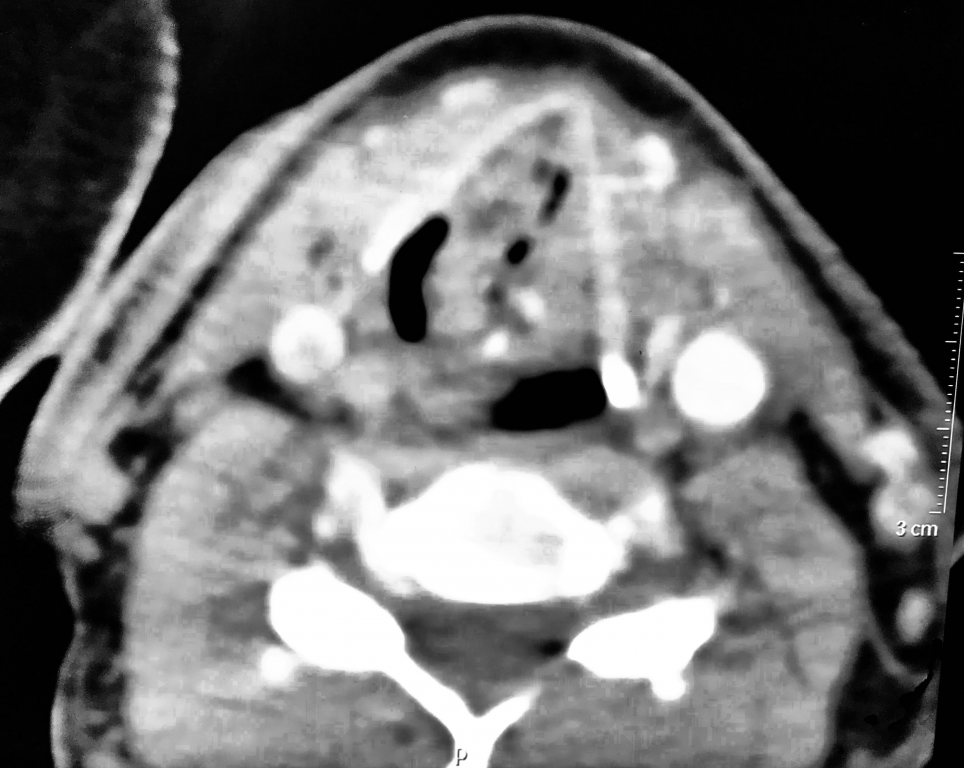 At the level of Vocal cord
Department of Radiology & Imaging, BSMMU