Due to ischemia of right leg, an arterial CT was performed, showing obstruction of right common femoral artery (Figure 3). The thrombus was removed and analysed, obtaining diagnosis of angiosarcoma.

Extension CT showed only multiple subcortical osteolytic lesions, affecting the bones of right leg (Figure 4). It was completed with another MRI, in which extensive reactive soft tissue changes were appreciated in STIR sequence (Figure 5).

During the evolution, infrapatellar amputation was made, with definite diagnosis of osseous and soft tissue angiosarcoma.
Discussion
Malignant osseous vascular tumours account for less than 1% of primary skeletal malignancies [1, 2]. Osseous angiosarcoma is a high grade malignancy bone tumour [2] with a 5-year survival rate of 60% [1]. It has male predominance and it usually appears in the sixth decade of life [3]. It usually affects long bones, especially tibia and femur, and clinically presents with pain. It usually spreads to lungs, but extension to the surrounding soft tissues may be found as well [1, 2].

The typical appearance of osseous angiosarcoma is a single osteolytic lesion with geographic destruction, well-defined, with cortical destruction, but without periosteal reaction [1, 2]. The absence of periosteal reaction is rather unusual for primary bone sarcoma, but it is frequently seen in metastases and myeloma. However, angiosarcoma can be multicentric as well, involving multiple bones, in up to 30%, which makes the differential diagnosis with metastasis more difficult. Nevertheless, multicentric angiosarcoma affects adjoining bones [4], whereas metastasis and myeloma usually affect dispersed bones, with predilection for pelvis and spine.

In our patient, extension of the lesions (confined to only one limb), the radiological appearance and the angiosarcoma found in the femoral artery support the diagnosis of a primary vascular bone tumour instead of metastasis and myeloma.

In MRI, this tumour usually presents T1 hypointensity, heterogeneous T2 and STIR hyperintensity and irregular enhancement with Gadolinium [1]. In addition, reactive changes located in the surrounding tissues, seen as ill-defined high signal on T2-weighted images may also be found [2]. Some of the lesions may appear in the MRI but not in the X-rays.

It is very important that the radiologist considers the possible diagnosis of malignant vascular tumour in these cases, especially because histological malignant vascular tumours often show an epithelioid morphology and therefore resemble metastatic carcinoma, representing a pitfall not only to the radiologist but also to the pathologist. The epithelioid phenotype and positive staining for cytokeratin are features that could suggest a histological diagnosis of metastases. These features make differentiation between metastases and osseous vascular sarcomas challenging [2].

Thus, it´s essential to request the pathologist adding vascular immunohistochemical markers to his/her diagnostic approach. These markers are: CD31 (very specific), CD34 (less specific), factor VII-related antigen and cytokeratins [4]. In our patient, we found positivity for CD31 and CD34, but cytokeratins were negative. 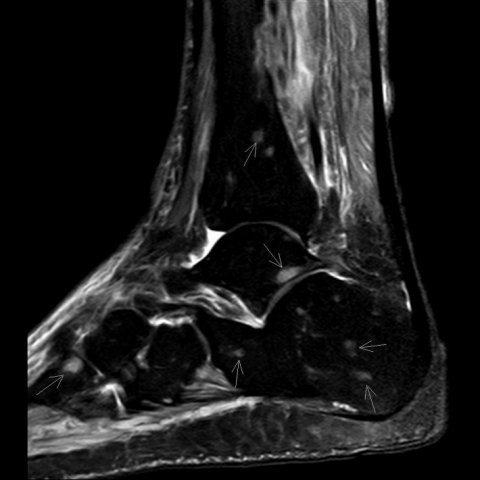 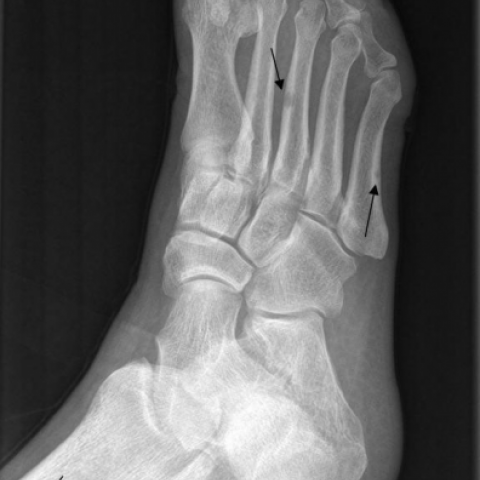 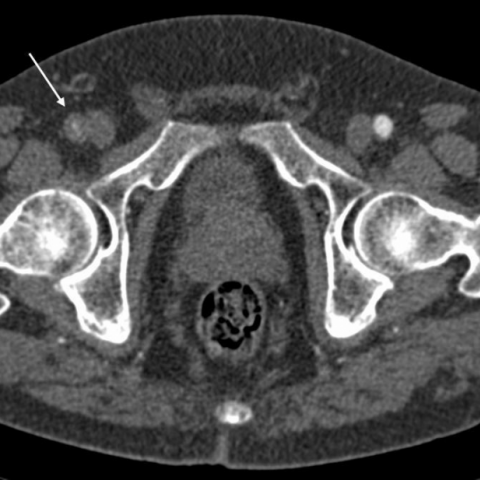 The arterial CT shows an occlusive thrombus in the right common femoral artery, just before the division into superficial and deep branches (arrow).
Figure 4 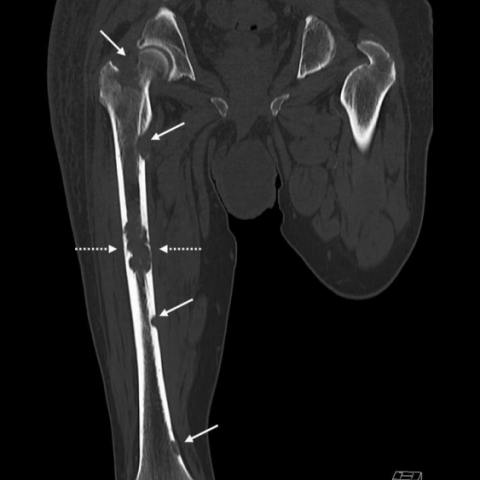 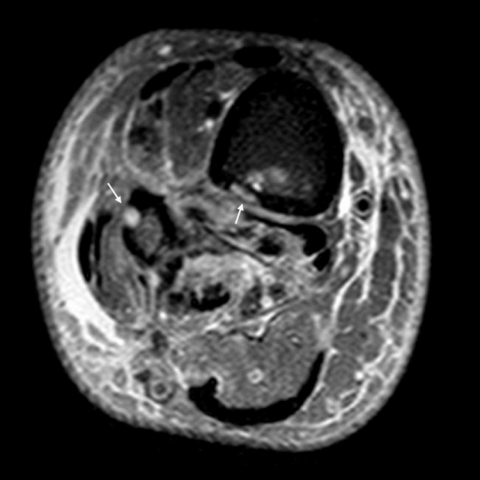 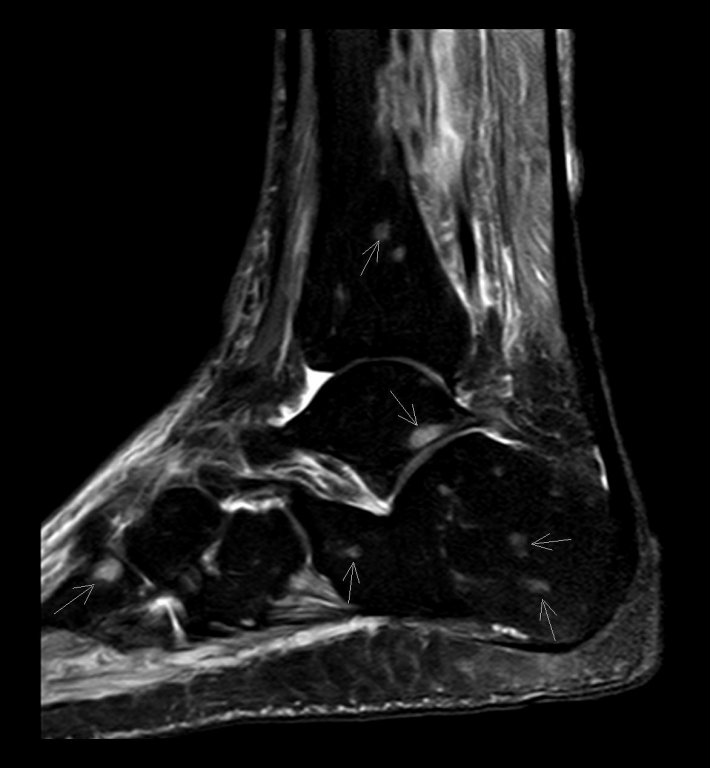 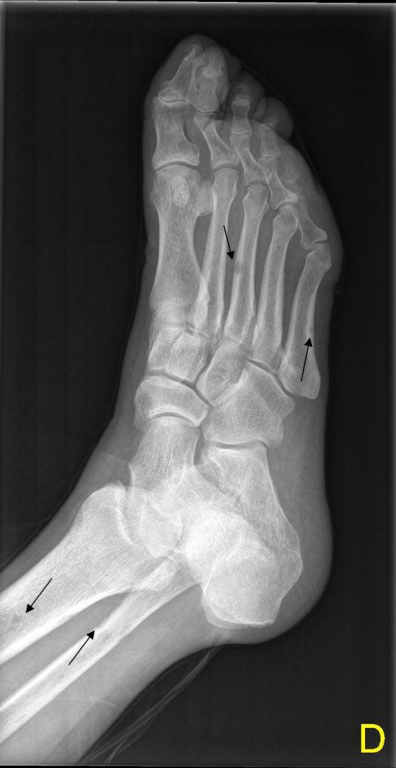 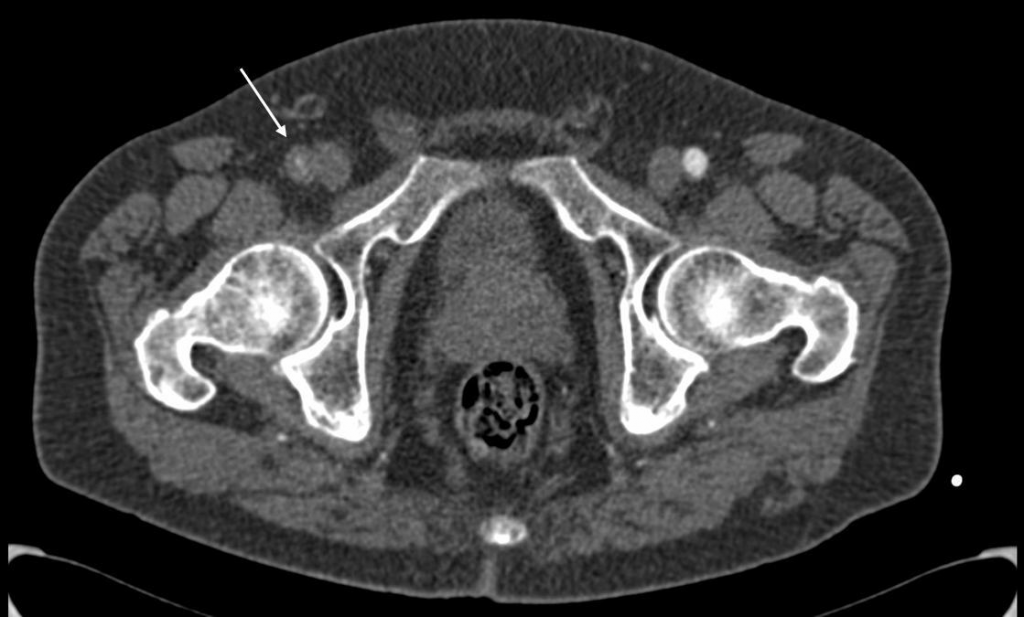 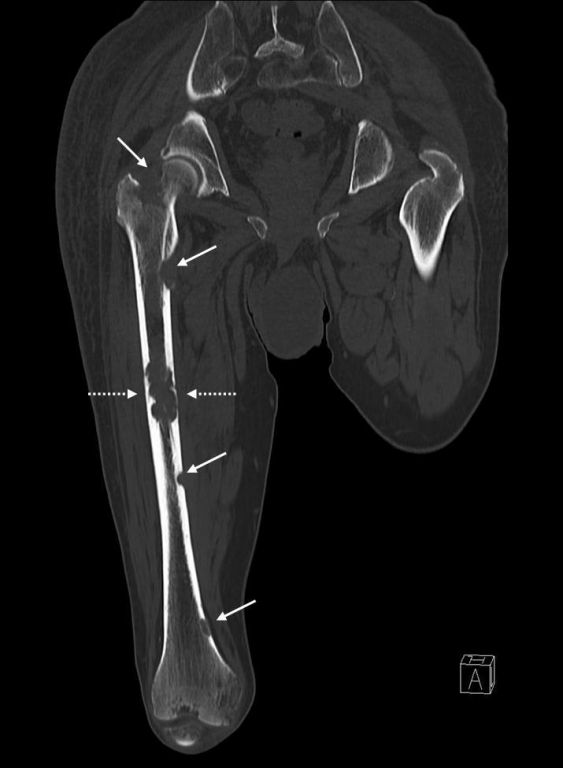 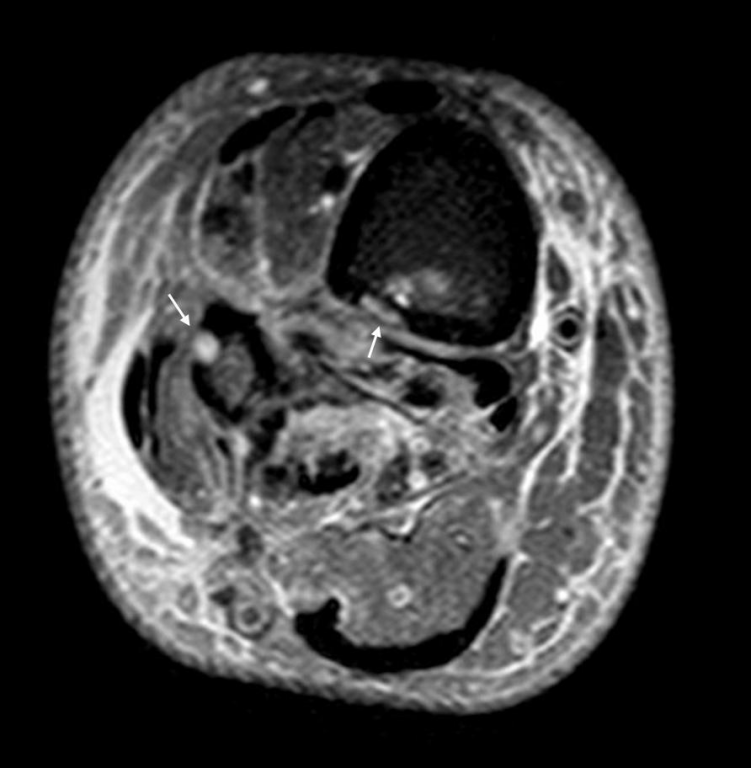