Categories
Area of Interest Gastrointestinal tract ; Imaging Technique CT
Procedure Education, Computer Applications-Detection, diagnosis ; Special Focus Lymphoma ;
Show more Show less
Download as PDF Print Show related cases Notify admin
Clinical History
A 59 year-old man presented with acute pain in the epigastrium, dysphagia and weight loss. In the past a H.pylori infection was eradicated. No enlarged lymphnodes or hepatomegaly were found in physical examination.
Imaging Findings
On CT the mass had unhomogeneous density, the contour was regular and was found in the cardia near the gastroesophageal junction. On enhanced CT, a low density with unhomogeneous appearance mass was demonstrated. The gastric wall and the mucosa were thickened and were mildly enhanced .
Discussion
DLBCL (Diffuse Large B Cell Lymphoma) is a neoplasm result as an arrangement of large B cells in a diffuse pattern [1]. Specifically, DLBCL makes up 38%–57% of primary gastrointestinal lymphomas and is the most common type of lymphoma in adults, usually manifested in the early 6th decade of life. There is a male predominance (1:3-1:6:1), and the 5-year-survival ranges from 60-90%. Clinical presentation can differentiate, as a 40% of the patients have an extranodal disease and one-third of the patients appear with B-symptoms (fever, weight loss, night sweat) and some patients have symptoms according to the affected system. Any tissue or organ can be primarily affected, but gastrointestinal tract is the most common. [1] DLBCL most frequently affects the stomach and less frequently the ileum. In the stomach, usually is the result of chronic Helicobacter pylori gastritis and the development of Extranodal Marginal Zone B-Cell Lymphoma (ENMZL) [2], which subsequently undergoes transformation to DLBCL because of accumulated genetic alterations. It should be noted that concomitant ENMZL has been reported in more than 30% of patients with gastric DLBCL, and more than 50% of these tumors undergo remission after eradication of Helicobacter pylori. Additional risk factors include immunodeficiency states, and the Epstein-Barr virus (EBV) infection.
On CT, gastric wall thickening - greater than 1 cm and, occasionally up to 8 cm - is more prominent in DLBCL than in patients with ENMZL [2]. On contrast –enhanced CT, a bulky submucosal mass with delayed enhancement and a thin band of early arterial enhancement of the overlying mucosa is usually seen. Enhancement of the mass is usually homogeneous, but low-attenuation areas of necrosis may be occasionally seen. In the majority of patients with DLBCL abdominal lymphadenopathy coexists.
The surgery was performed because the patient had dysphagia and stomach pain after the meal. After the surgical operation the patient underwent chemotherapy.
Furthermore, treatment of this lymphoma should be mentioned [1]. The most common therapy for DLBCL includes rituximab, cyclophosphamide , doxorubicin, vincristine and prednisone (R-CHOP) [3].This treatment is effective in 60-70% of the patients whereas 30-40% of patients will relapse or are resistant to the R-CHOP .The last patients will propably begin a therapy with R-EPOCH regimen which includes rituximab, etoposide, prednisone, vincristine, cyclophosphamide and doxorubicin. For younger patients is recommended an autologous stem cell transplantation.
[‘Written informed patient consent for publication has been obtained"]
Differential Diagnosis List
Diffuse Large b-cell Lymphoma (DLBCL) of the Stomach
• Adenocarcinoma of the stomach
• Gastrointestinal stromal tumor (GIST)
• Hypertrophic gastritis
• Tuberculosis
Final Diagnosis
Diffuse Large b-cell Lymphoma (DLBCL) of the Stomach
References 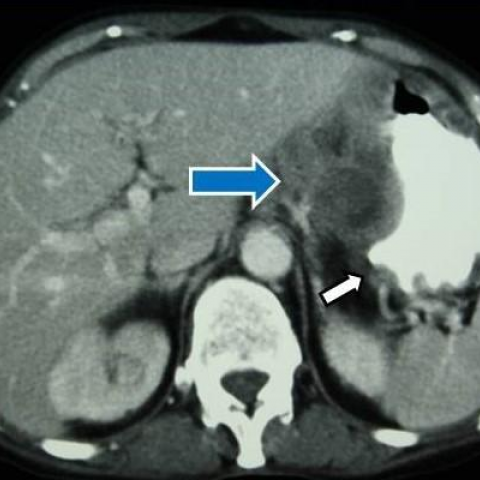 Axial enhanced CT image -on portal phase- demonstrates a round shape mass with regular borders in the cardia of the stomach, (blue arrow). Gastric wall and mucosa appeared to be thickened (white and black arrows).
Figure 2 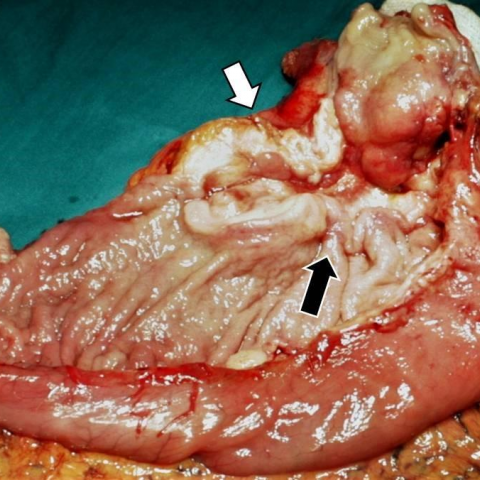 A voluminous and heterogenous mass is apparent in gastroesophageal junction (blue arrow) . Gastric wall and mucosa are infiltrated changing the normal pattern of the gastric folds (white and black arrows) . 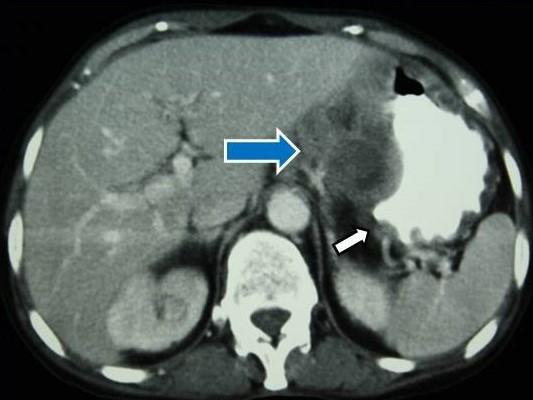 Axial enhanced CT image -on portal phase- demonstrates a round shape mass with regular borders in the cardia of the stomach, (blue arrow). Gastric wall and mucosa appeared to be thickened (white and black arrows).
N.Courcoutsakis, Department of Radiology, Democritus University of Thrace, Greece 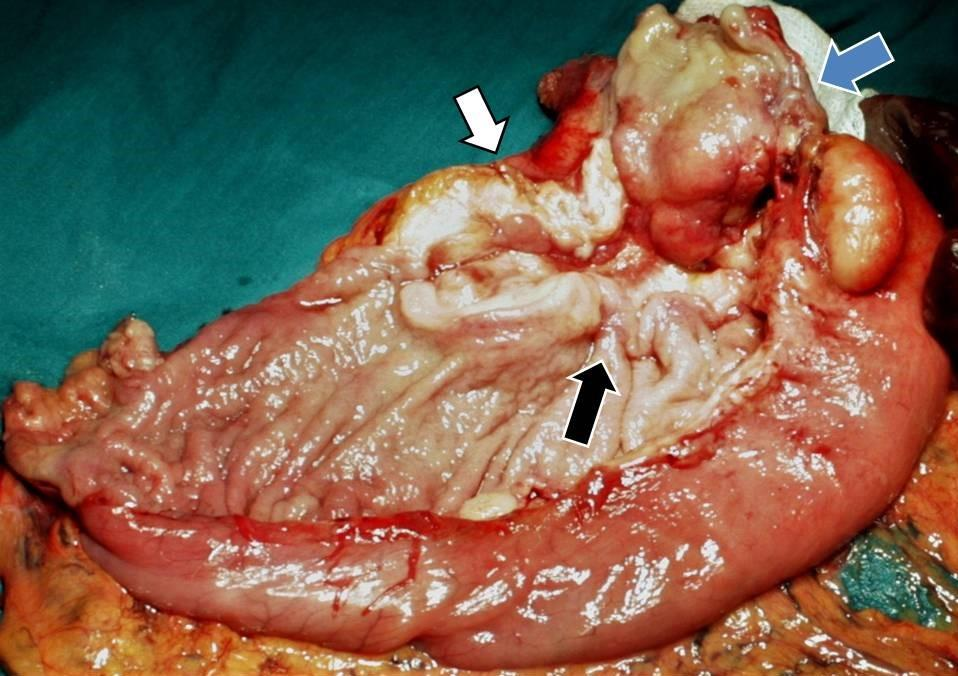 A voluminous and heterogenous mass is apparent in gastroesophageal junction (blue arrow) . Gastric wall and mucosa are infiltrated changing the normal pattern of the gastric folds (white and black arrows) .
Karayiannakis A, Department of Surgery, Democritus University of Thrace, Greece