Categories
Area of Interest Arteries / Aorta, Abdomen, Biliary Tract / Gallbladder, Bones ; Imaging Technique Catheter arteriography, Absorptiometry / Bone densiometry
Procedure Recanalisation ; Special Focus Arteriosclerosis, Abscess, Prostheses ;
Show more Show less
Download as PDF Print Show related cases Notify admin
Clinical History
59 yo lady, active smoker, history of right leg claudication (Rutherford 3). CT-angiography reveals a short stenosis on the origin of right common iliac artery (rCIA), a long stenosis of external iliac artery (EIA) and occlusion of superficial femoral artery. An endovascular attempt to recanalize the EIA is scheduled.
Imaging Findings
The procedure started using a left femoral approach because no femoral pulse was appreciated on the right side. Preliminary angiogram confirms short stenosis of the origin of the rCIA and long stenosis of EIA (Fig.1). After negotiation of the two lesions a 6F 40cm-introducer-sheath (Flexor-Cook) was advanced in the rCIA and a 5mm PTA was done with a suboptimal result and a 6x80mm selfexpandable stent was deployed with a satisfactory result (Fig.2a,b). We decided to treat the rCIA stenosis using the same approach in order to avoid a second femoral access. For this reason a 8x36mm balloon-expandable stent (Valeo-Bard) was advanced inside the introducer sheath in the proximal rCIA. The sheath and also the wire were retracted leaving only the proximal 5 cm floppy tip on the right side. This way the stent fitted correctly on the proximal rCIA. The stent was deployed and final check demonstrated an optimal result(Fig.3).
Discussion
Atherosclerosis of iliac arteries is widespread. As inflow vessels, they are of great clinical significance and increasingly being treated by endovascular means. Most commonly, stents are implanted as stated in a recent paper [1] but as already established by old papers pubblished more than 20 years ago [2, 3].
Although this is an established procedure, from a technical point of view the precise deployment of a stent at the origin of the common iliac artery is often critical. Two points must be considered: type of stent (selfexpandable or balloon expandable) and approach (ipsilateral or contralateral). Concerning the first point many Authors support the use of balloon expandable stents at the origin of the CIA because deployment is more precise without any problems such as the "jumping effect", sometimes observed with selfexpandable stents. Concerning the approach the ipsilateral approach is the one preferred because easier and more precise. The contralateral approach generally is a second choice and used when the ipsilateral approach fails. Generally it is a good option for EIA lesions which can be crossed better with an antegrade approach rather than in a retrograde fashion, but for lesions involving the origin of the CIA stent deployment can be difficult because the use of a stiff wire and of long introducer sheath tend to modify the anatomy of iliac bifurcation causing an inaccurate deployment. The reported manouvre of retracting the guide wire leaving only the distal floppy part of the wire inside the balloon catheter reduces the modifications of bifurcation anatomy and makes stent deployment more precise. This is a manouvre to use in selected cases from experienced operators.
Further advantages observed in this case are that a second arterial puncture was avoided reducing in this way discomfort for the patient, time procedure and costs (closure device). 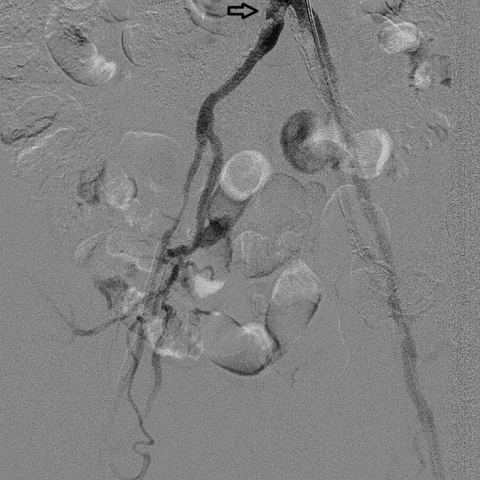 Angiography shows a short stenosis at the origin of CIA (arrow). 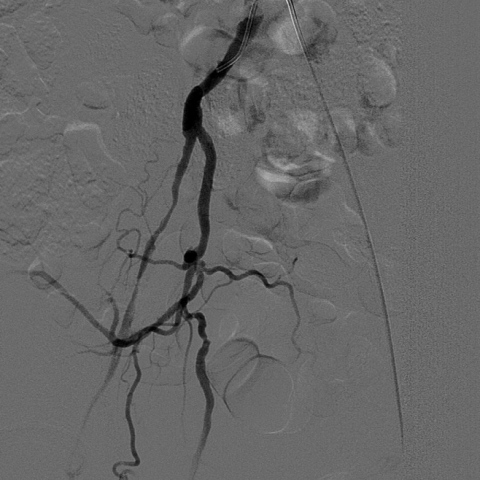 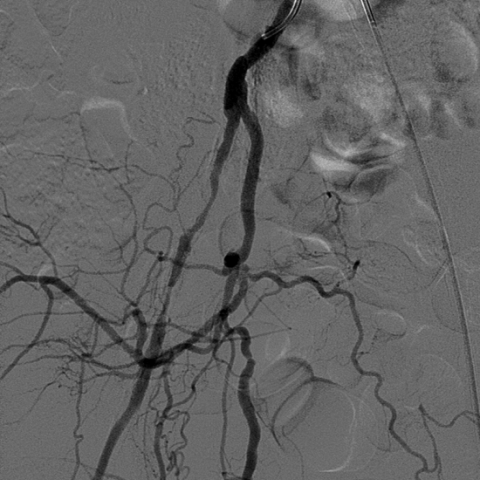 The yellow arrow demonstrates where the common femoral artery has regular calibre.
Figure 2 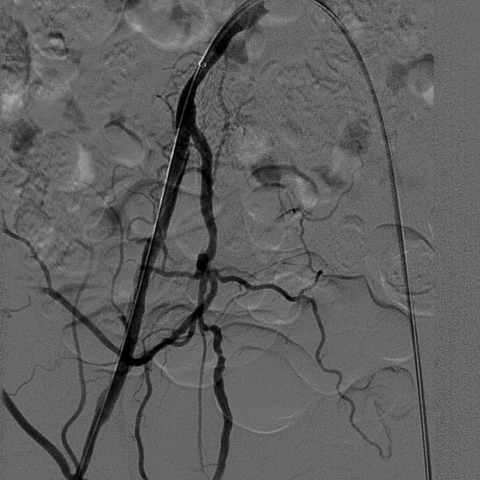 Angiogram after 5 mm PTA: multiple not flow-limiting dissections in the EIA. 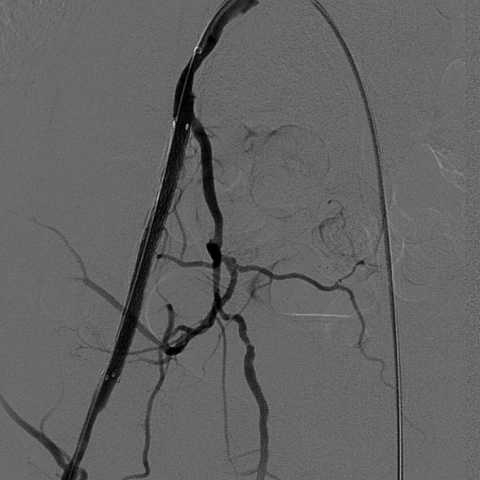 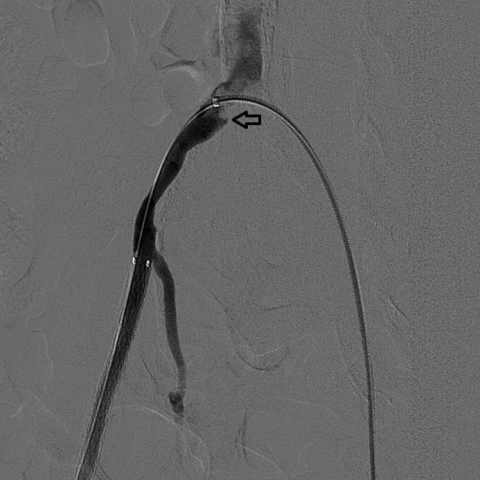 The introducer-sheath is retracted at the level of the CIA: angiography confirms the stenosis (arrow). 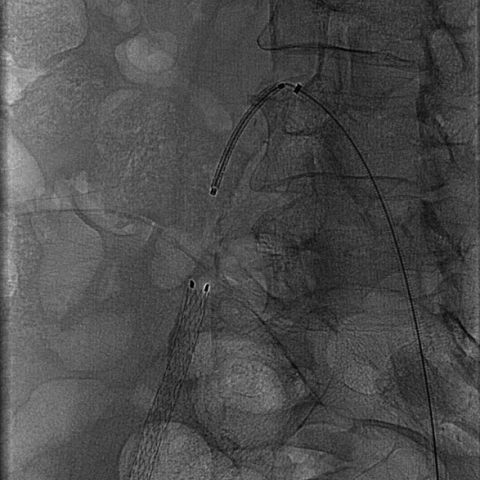 A balloon-expandable stent was advanced in the right common iliac artery and the wire was retracted leaving only the floppy part inside the balloon catheter: the stent fits perfectly in the proximal CIA. 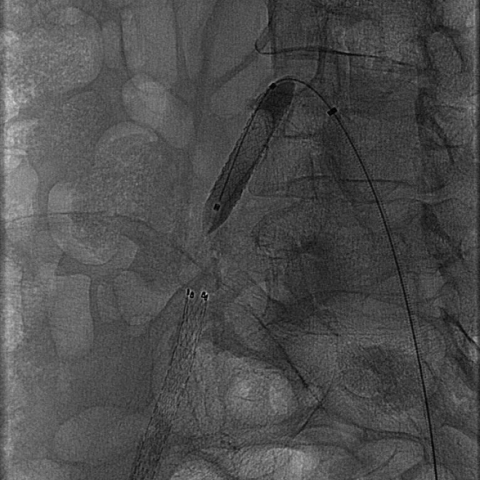 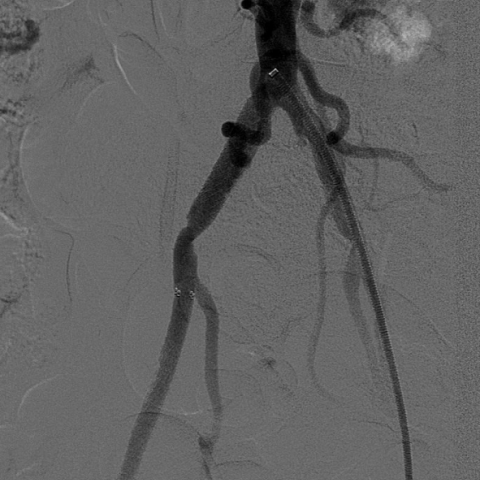 Final angiogram shows a precise deployment of the stent with an optimal flow in the CIA. 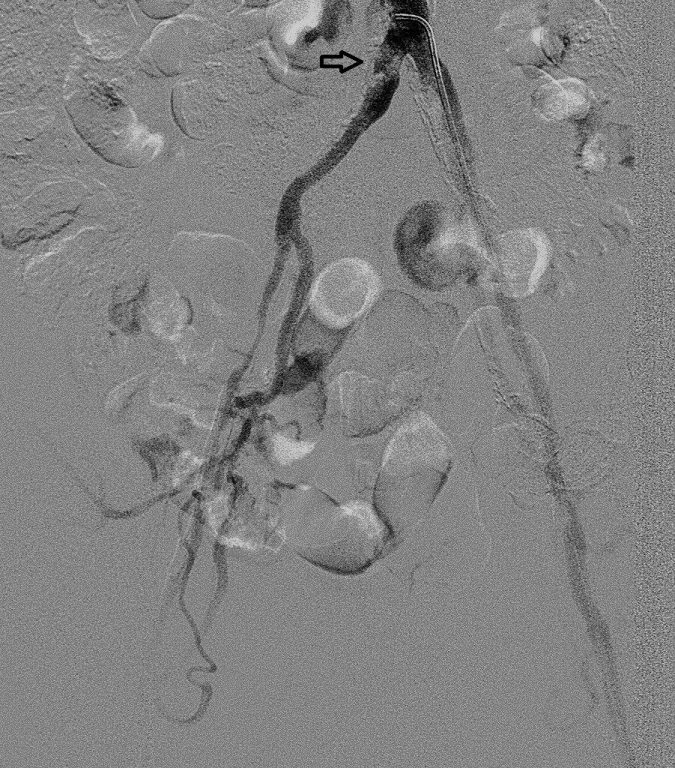 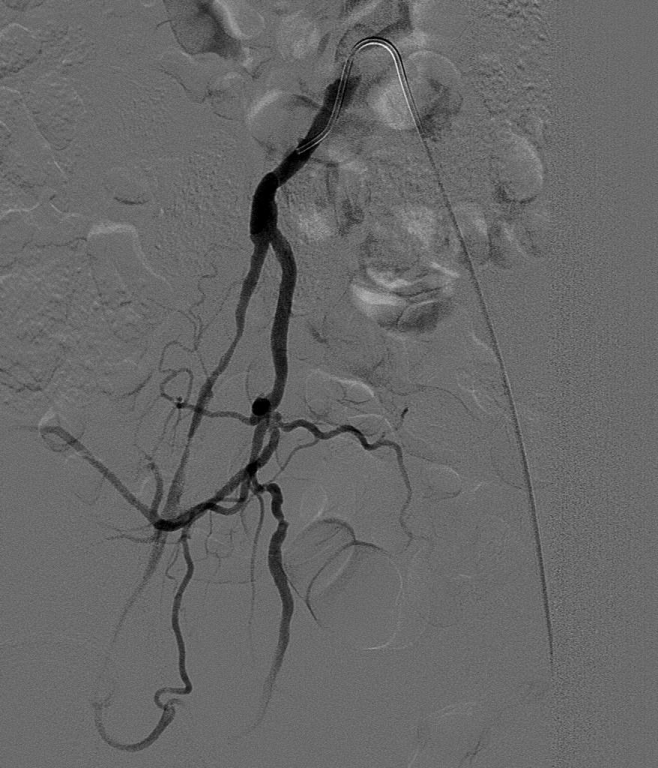 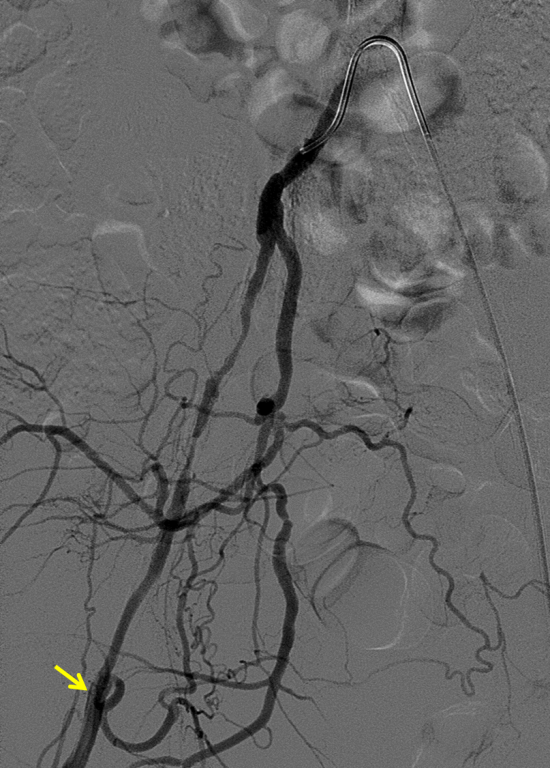 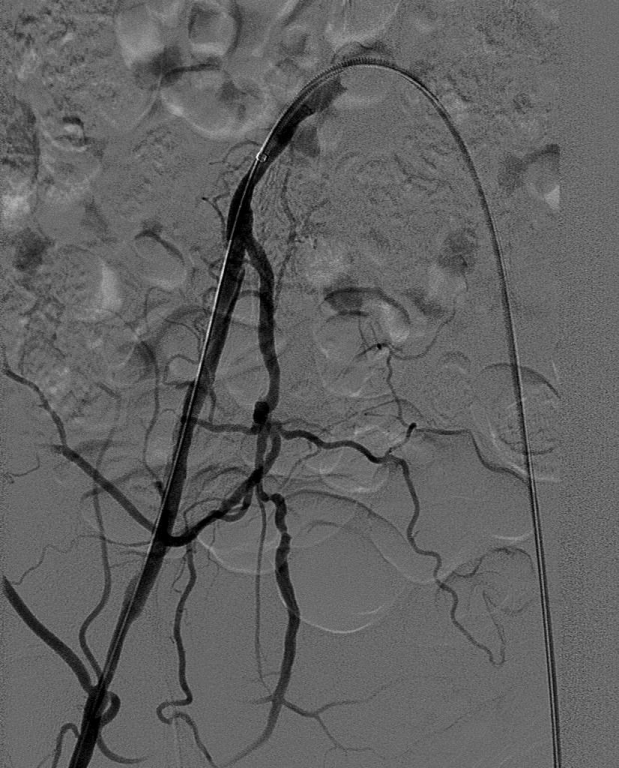 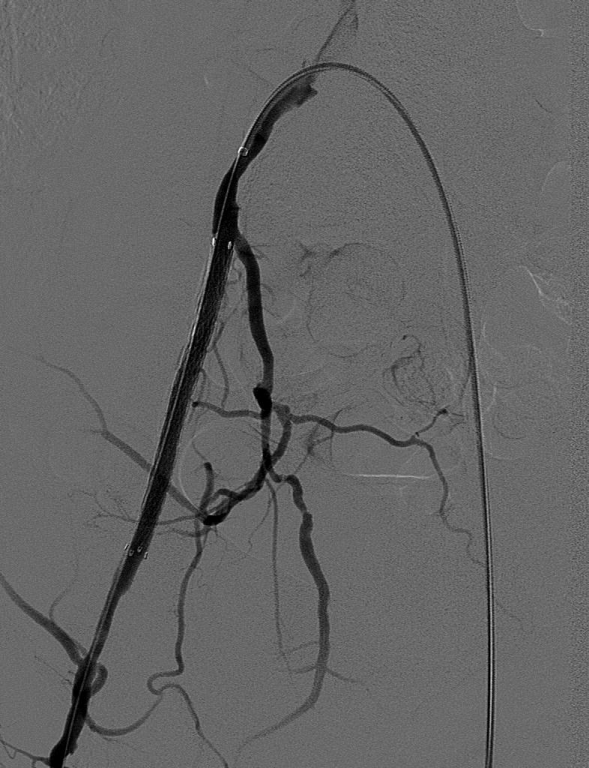 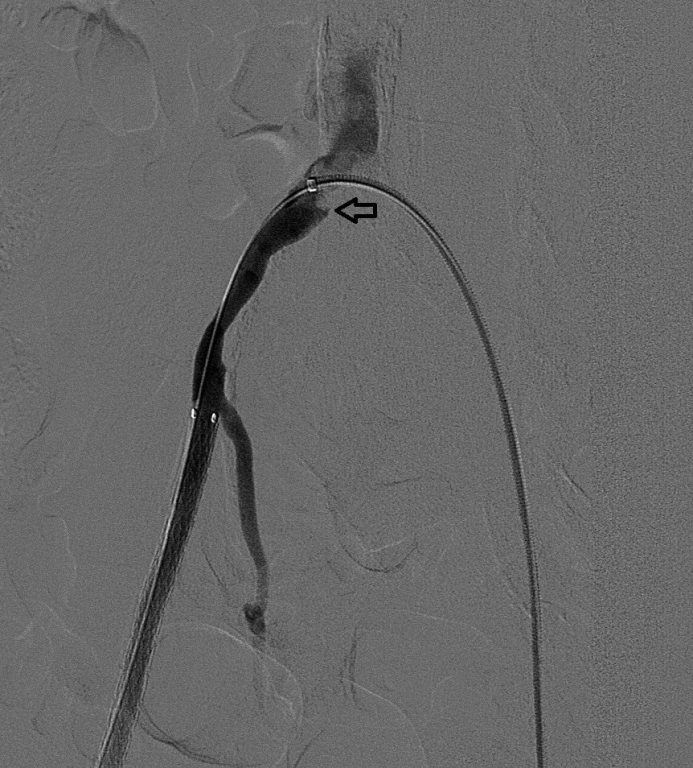 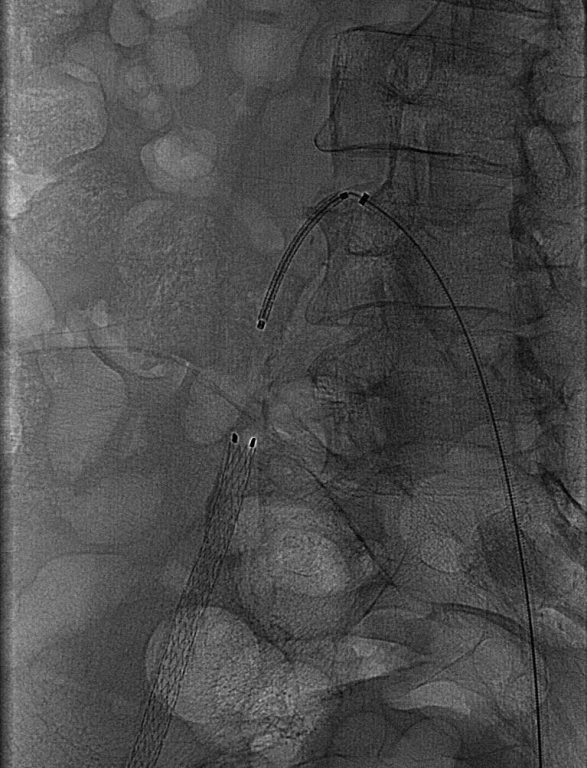 A balloon-expandable stent was advanced in the right common iliac artery and the wire was retracted leaving only the floppy part inside the balloon catheter: the stent fits perfectly in the proximal CIA.
SC Radiologia, Az. Sanitaria Universitaria Integrata di Trieste, Italy 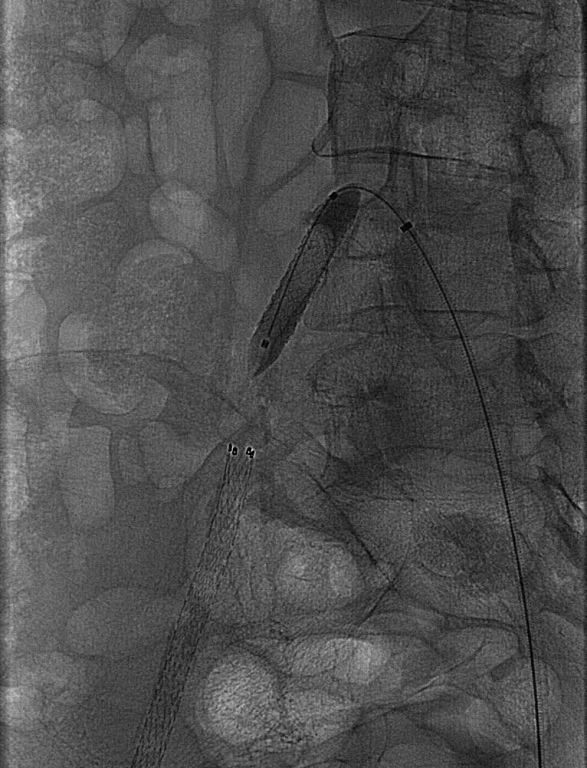 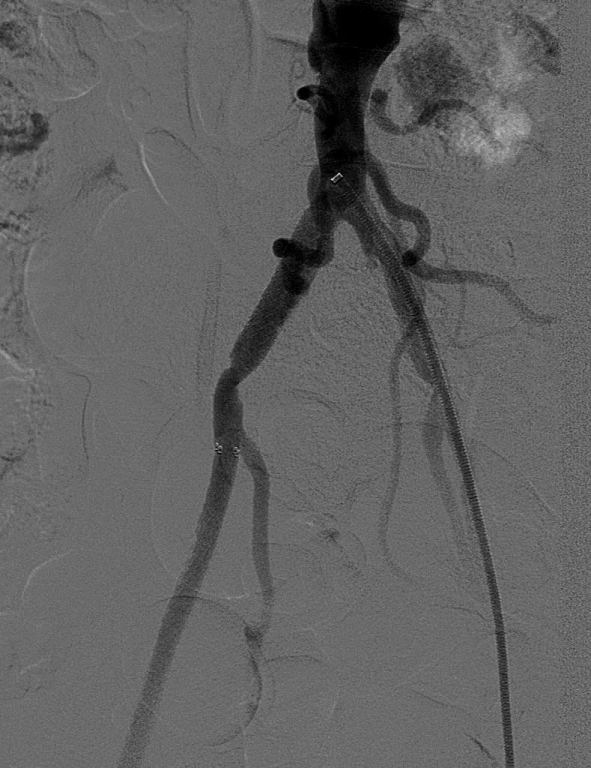