Omental infarction in the postpartum period

Categories
Area of Interest Abdomen, Emergency ; Imaging Technique Ultrasound, CT
Procedure Diagnostic procedure ; Special Focus Acute, Ischaemia / Infarction ;
Show more Show less
Download as PDF Print Show related cases Notify admin
Clinical History
A female patient, who gave birth 9 days ago by uncomplicated vaginal partus, presents with subacute, gradually worsening epigastric pain. Further clinical history is unremarkable, except for chronic pyrosis. Clinical examination revealed epigastric tenderness without peritoneal irritation. Blood analysis showed moderate leucocytosis and strongly elevated CRP. No fever was present.
Imaging Findings
Abdominal ultrasound showed a heterogenic lesion in the epigastric part of the greater omentum consisting of concentrically alternating layers of hyper- and hypoechogenity (Fig 1). Subsequent contrast-enhanced CT of the abdomen confirmed an ill-defined ovoid lesion with a whirled pattern of concentric alternating layers of fatty and soft tissue attenuation (Fig 2a and 2b). The was no continuity with the transverse colon and the colonic wall was not thickened (Fig 2c). There was a mild diffuse infiltration of the intraperitoneal fat (Fig 2a and 2b, red arrowheads).
Discussion
Omental infarction is a rare condition affecting adults more often than children, with a predominance in young and middle aged women [1, 2, 3]. A common mechanism is omental torsion [1, 2]. The condition can be divided into primary and secondary infarction [4]. Hypercoagulable state, obesity and vasculitis are predisposing factors [1, 4]. Precipitating factors include overeating, overexertion and trauma [1, 4]. Secondary omental infarction occurs because of mechanical distortion or manipulation of the omentum, following abdominal or pelvic surgery [1, 3]. Pregnancy and puerperium put females more at risk because of hormone-induced hypercoagulable state in addition to mechanical distortion of the omentum by the gravid uterus [2, 4].

Ultrasound may reveal a predominantly hyperechoic omental lesion, but unfortunately lacks sensitivity [6].
CT examination is the most appropriate tool to diagnose omental infarction and rules out other causes of acute abdomen in emergency settings. Typically, an ill-defined, heterogeneous, fat-containing lesion between the anterior abdominal wall and the transverse or ascending colon is seen [1, 3]. The shape is variable and may be either ovoid, cakelike or triangular [1, 3]. If the infarction is secondary to torsion, there is a whirled pattern of concentrically arranged soft tissue strands inside the fatty mass [1, 2, 3]. Secondary omental infarctions tend to be larger and denser than the primary [1, 4]. Omental torsion occurs more often at the right side of the omentum, probably because of its larger size and greater mobility [1].

Treatment of an omental infarction is essentially conservative, but surgery is indicated in case of complications such as abscess formation or bowel obstruction [1, 4].

The CT findings may persist for years, but the lesion will usually shrink over time. Primary omental infarctions tend to remain ill-defined, while the secondary tend to develop a well-defined hyperdense rim [1, 4]. 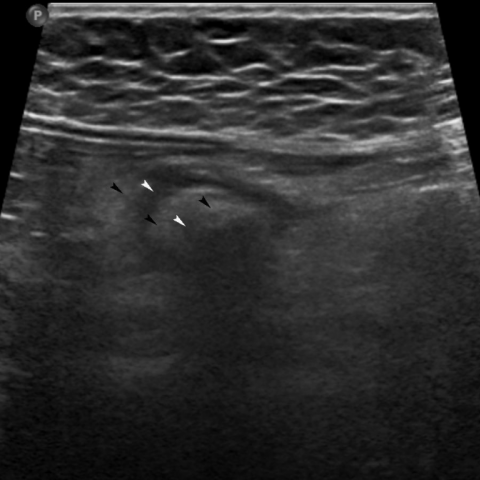 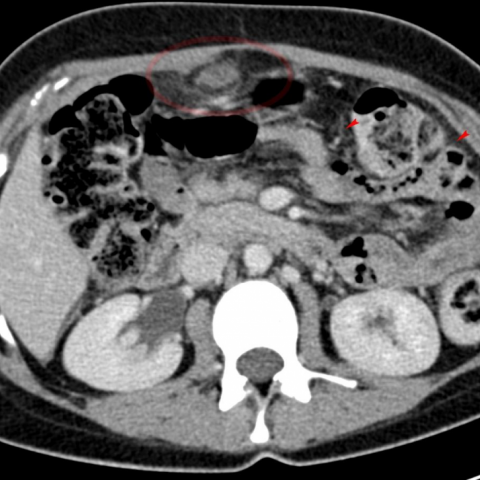 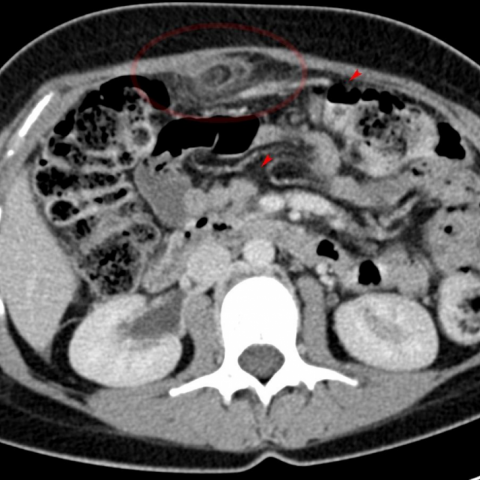 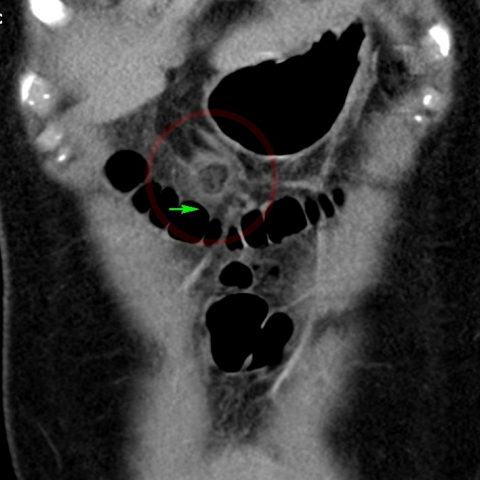 Ovoid lesion in the greater omentum with ill-defined margins, heterogeneous - partly fatty content (red circle). There is no continuity with the transverse colon and the colonic wall is not thickened (green arrow). 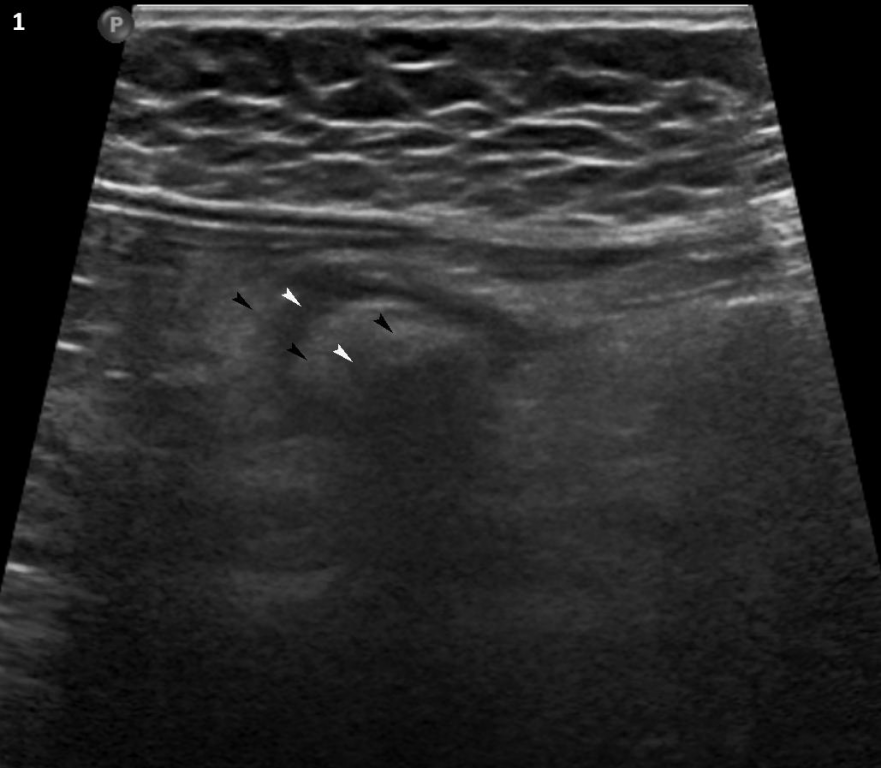 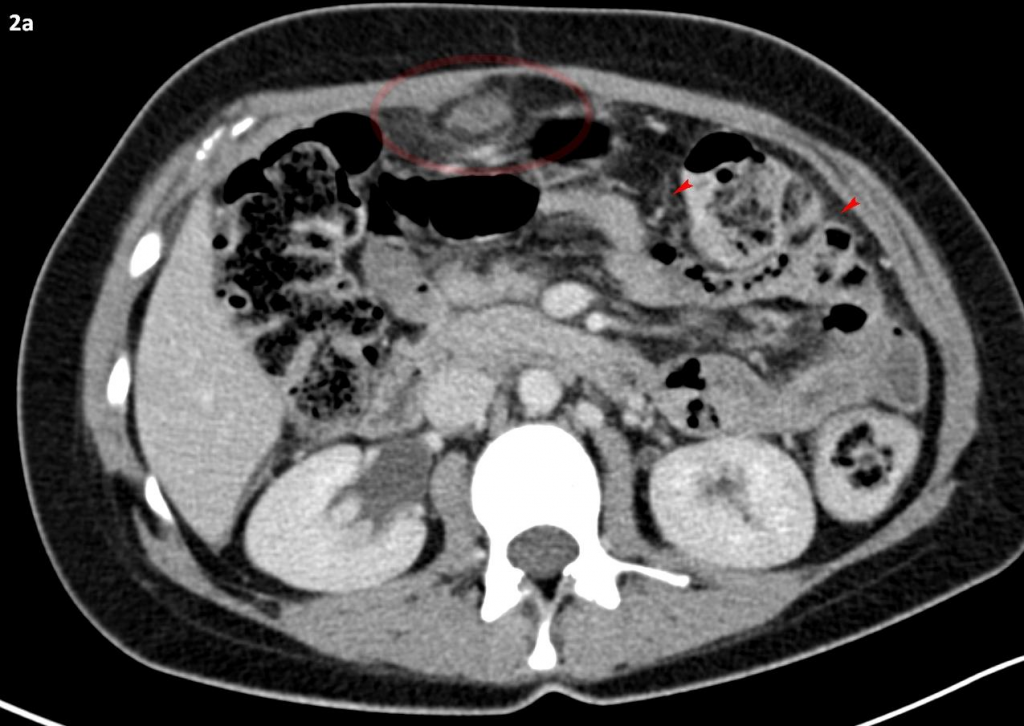 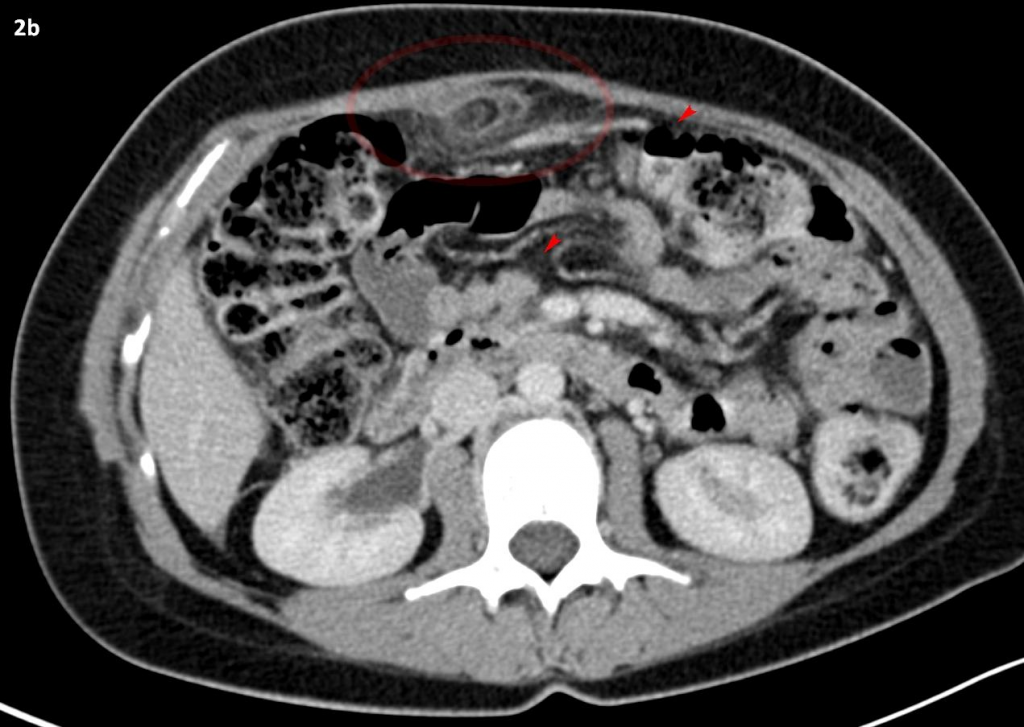 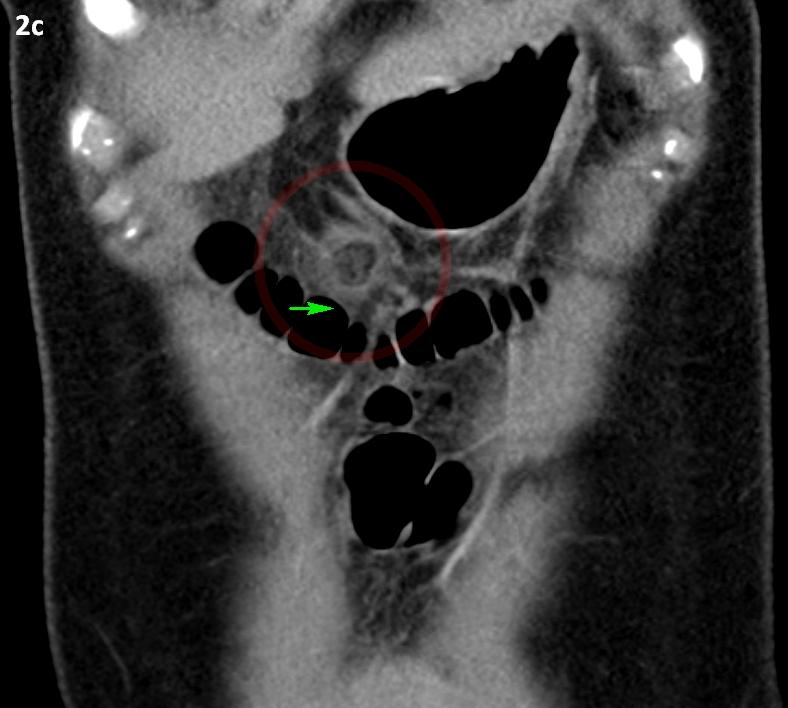 Ovoid lesion in the greater omentum with ill-defined margins, heterogeneous - partly fatty content (red circle). There is no continuity with the transverse colon and the colonic wall is not thickened (green arrow).
AZ Sint-Maarten, Department of Radiology, Mechelen, Belgium