Congenital syngnathia in a newborn

Categories
Area of Interest Education, Head and neck, Musculoskeletal soft tissue, Anatomy, Bones, Musculoskeletal bone, Musculoskeletal system, Paediatric ; Imaging Technique CT
Procedure Diagnostic procedure ; Special Focus Congenital ;
Show more Show less
Download as PDF Print Show related cases Notify admin
Clinical History
Newborn at term is admitted to the neonatal intensive care unit from the ward due to respiratory difficulty and facial cyanosis. On physical examination, a complete fusion of the maxilla and the mandible is noted. Absence of a normal oral cavity is also appreciated (Fig 1).
Imaging Findings
On CT of the facial bones, complete fusion of the mandible with the maxilla and zygomatic arch with hypoplastic mandibular condyles was observed (Fig 2 and 3). The teeth of the upper and lower dental arches are placed in a central location (Fig 4). There is also a disruption of the bone continuity in the midline of the hard palate due to a cleft palate (Fig 5).
An abdominal and cranial ultrasound was performed, and no other associated malformations are observed.
The patient undergoes a maxillomandibular osteotomy, a labial comisuroplasty, a frenectomy and a lingual adhesion with the clinical and the radiological diagnosis of congenital syngnathia. A post-surgical CT was performed and showed separation of the maxilla, the mandible, and the zygomatic arch (Fig 6).
Discussion
Maxillomandibular complete syngnathia is an extremely rare congenital malformation. It results from a congenital fusion of the mandible with the maxilla and/or the zygomatic arch. The fusion may be due to the presence of mucosal bands (synechia) or the existence of a complete bony fusion (synostosis) [1, 2, 3]. It may affect the midline or lateral and be unilateral or bilateral, although most of the published cases are unilateral fibrous fusions. [1]
Its etiology remains unknown and involves an abnormal development of the splanchnocranium [1].
Consanguinity has been reported in 5 cases of bony syngnathia, which suggests that there may be an autosomal recessive inheritance [1]. Despite this, the most commonly described hypothesis is the persistence of the buccopharyngeal membrane. Other recounted causes are: abnormal vascularization of the stapedial artery, failure of the migration of neural crest cells, trauma, or teratogens such as meclozine or high doses of vitamin A [1].
Our patient had a synostosis of the mandible, the maxilla and the zygomatic arch, which constitutes the most severe and least common form of syngnathia [1].
The findings of severe micrognathia and polyhydramnios on prenatal ultrasound should raise the suspicion of syngnathia [1].
The management of the syngnathia requires a multidisciplinary team and it is a priority to ensure the airway due to the lack of a normal oral cavity. Blind nasal intubation, fiber optic intubation and tracheostomy have been used to stabilise patients with syngnathia, although these approaches have been associated with complications or technical difficulties. Therefore, nasopharyngeal intubation has been reported as a simple and less invasive technique, being a valid alternative to these patients [1].
Our patient underwent a nasopharyngeal intubation directed through a fibroscope.
Congenital syngnathia is usually discovered at birth due to the inability of the baby to open its mouth or feed itself normally. However, cases of later presentation have been reported, because of the existence of a partial fusion that allows the baby to be fed through a small opening of its mouth [3].
This entity has a wide range of variability, and therefore surgery must adapt to the situation and the general condition of the patient. There is little information on the long-term development of these patients [1, 3].
In conclusion, syngnathia is a rare congenital malformation of an unknown cause, which requires early diagnosis and multidisciplinary management.
Differential Diagnosis List
Syngnathia due to synostosis.
Syngnathia due to synostosis
Syngnathia due to synechia
Final Diagnosis
Syngnathia due to synostosis.
References 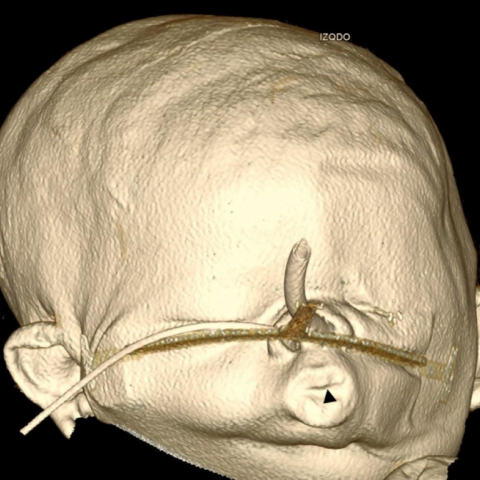 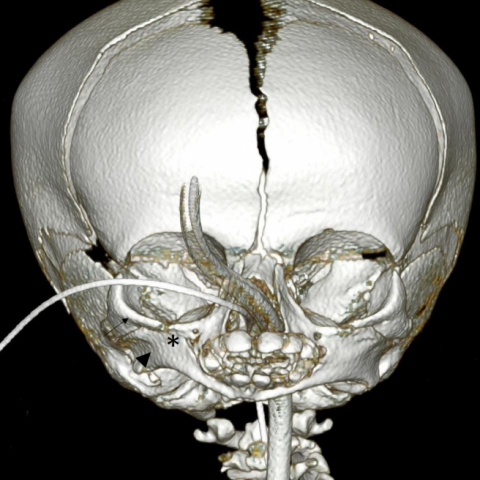 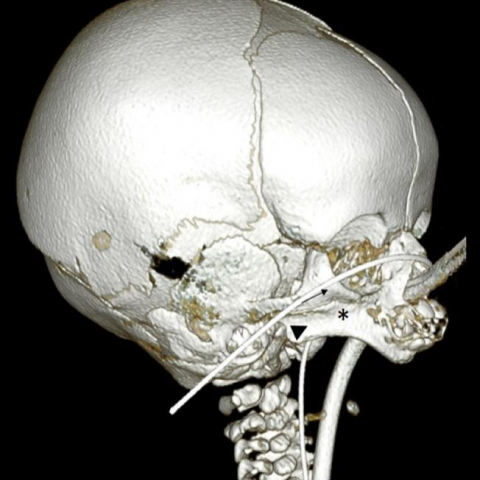 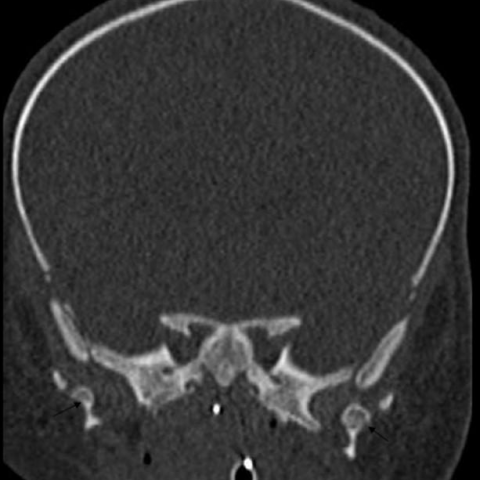 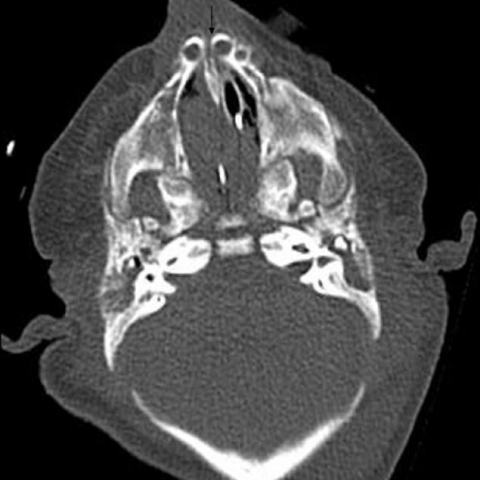 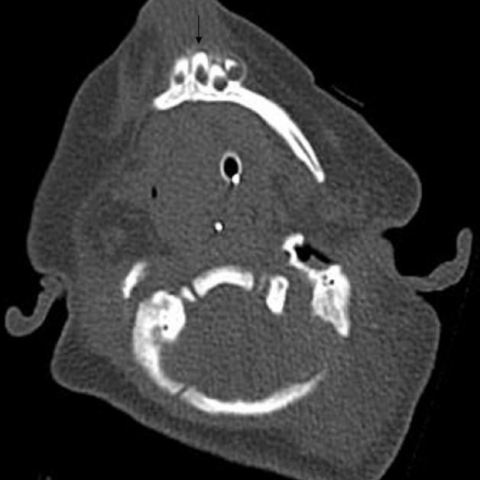 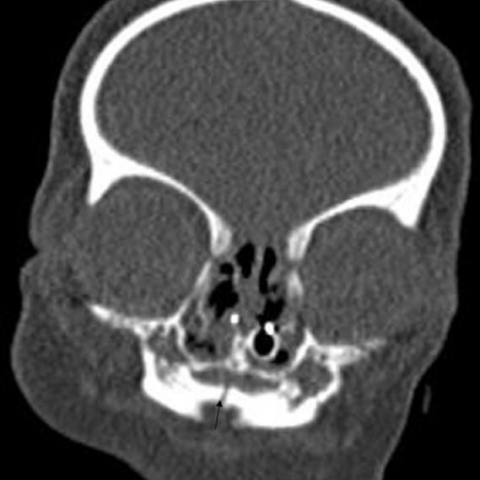 A disruption of the bone continuity in the midline of the hard palate due to a cleft palate is seen in this coronal facial bone CT reconstruction (arrow).
Figure 6 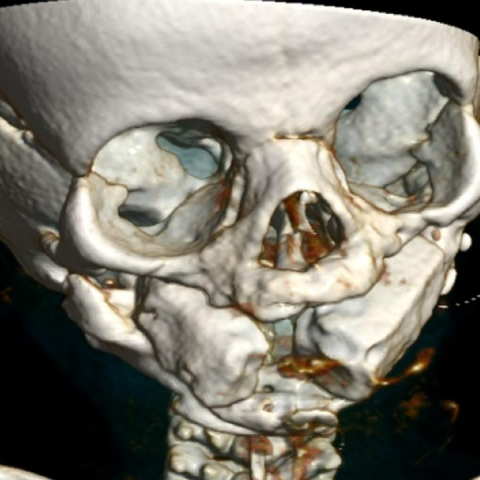 3D CT cranial bone reconstruction after the surgery in front view shows an appropriate separation of the maxilla, the mandible and the zygomatic arch. 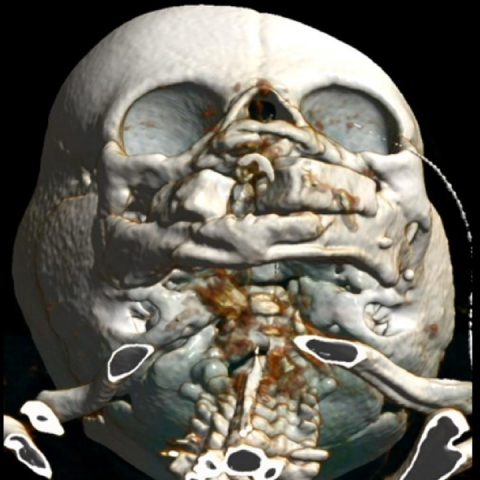 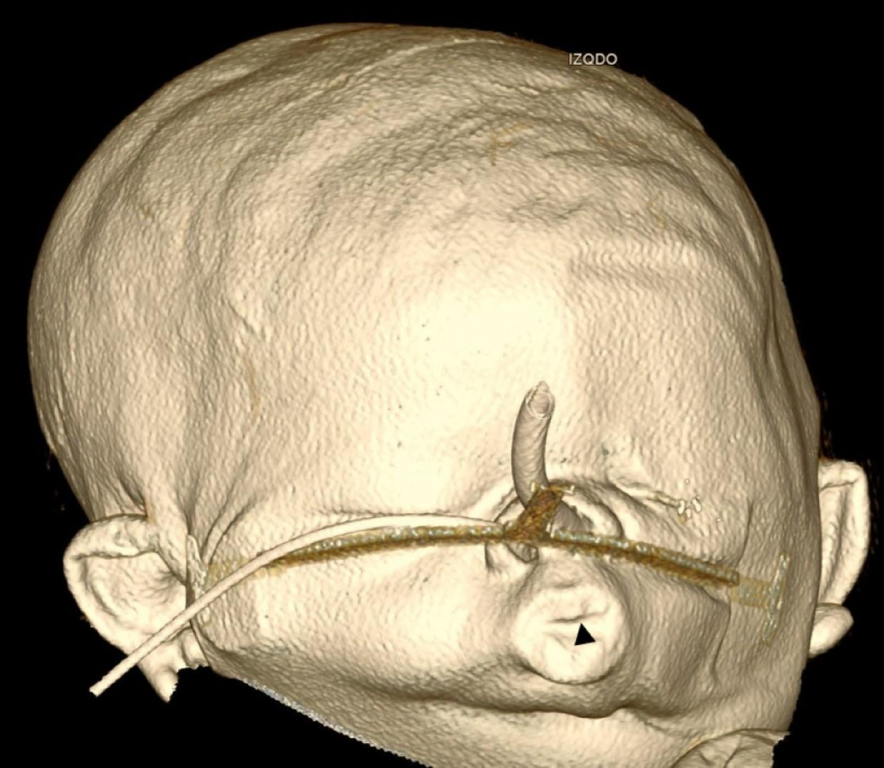 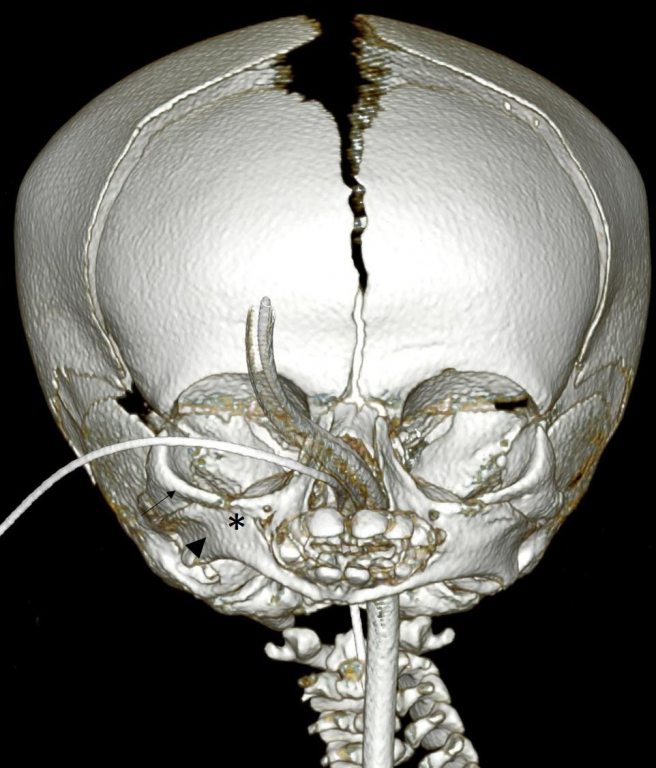 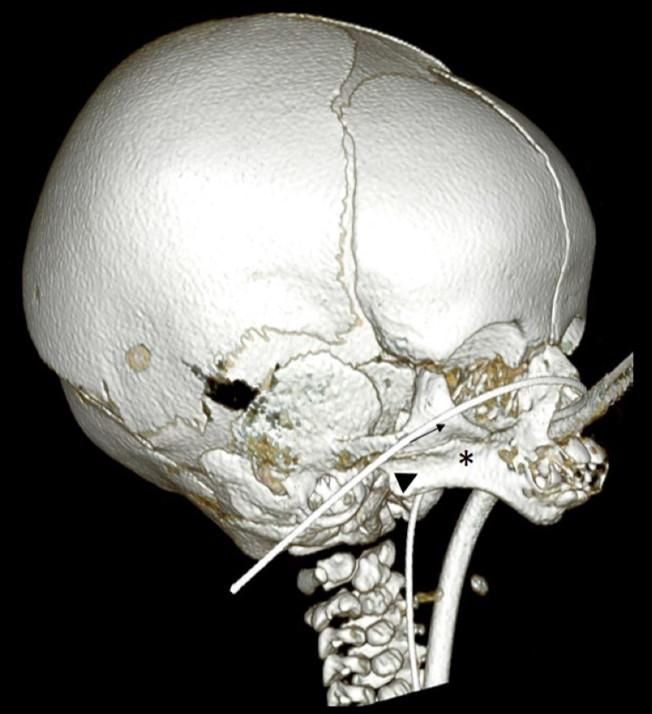 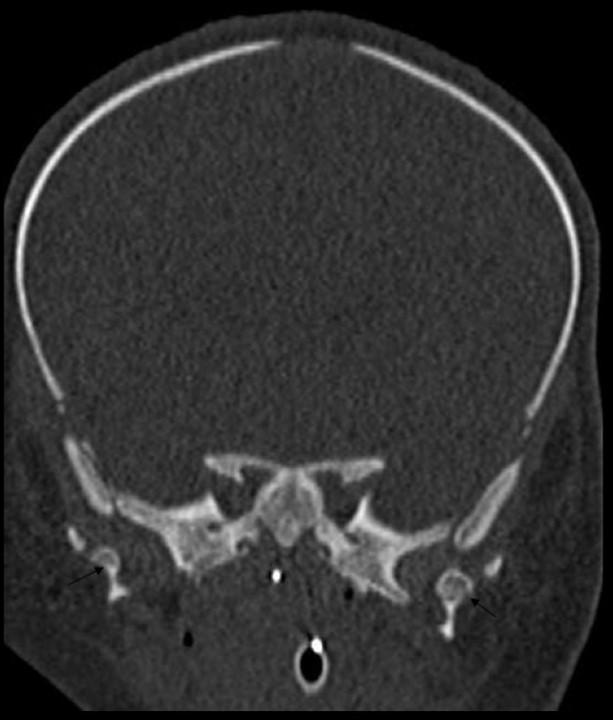 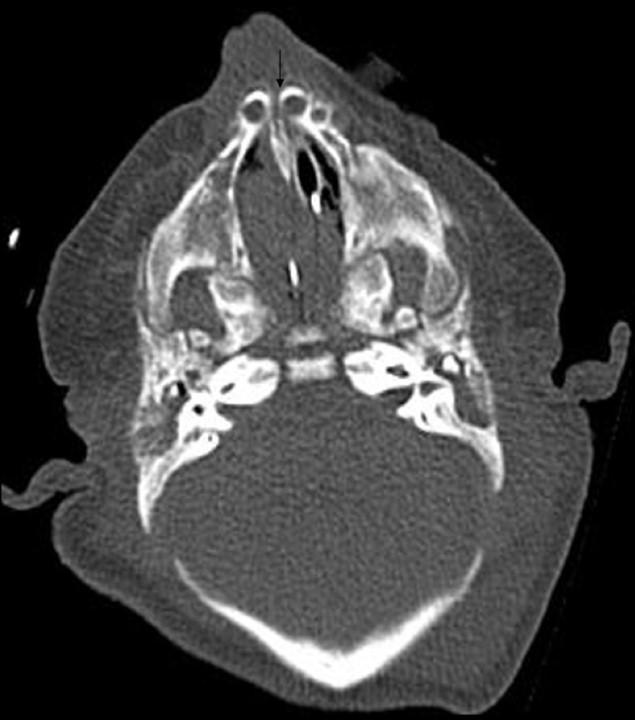 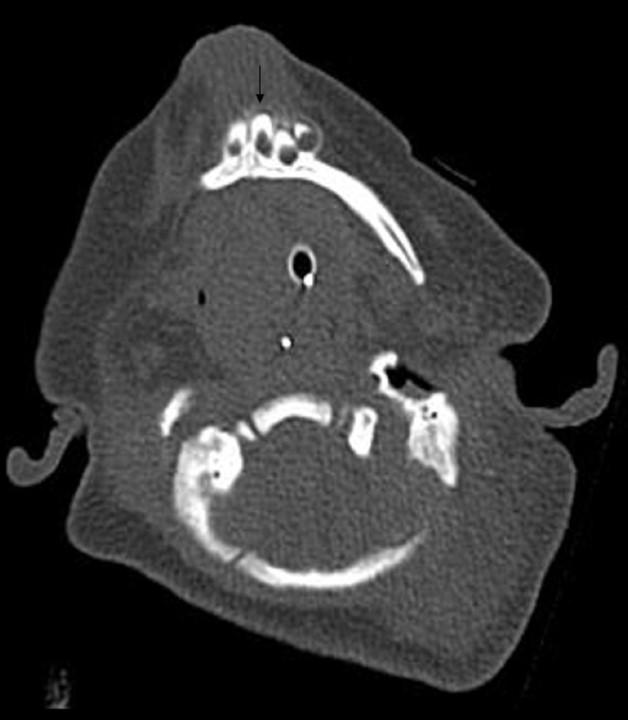 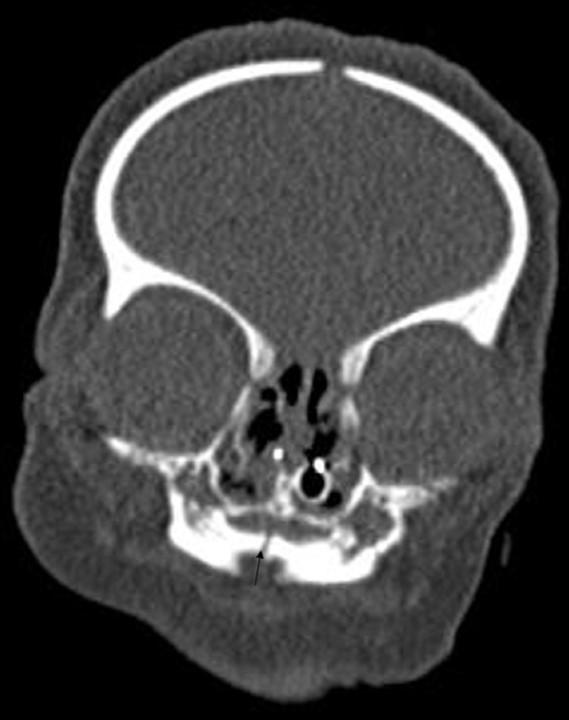 A disruption of the bone continuity in the midline of the hard palate due to a cleft palate is seen in this coronal facial bone CT reconstruction (arrow).
Department of Radiology, Santa Lucia University Hospital, Cartagena, Murcia. 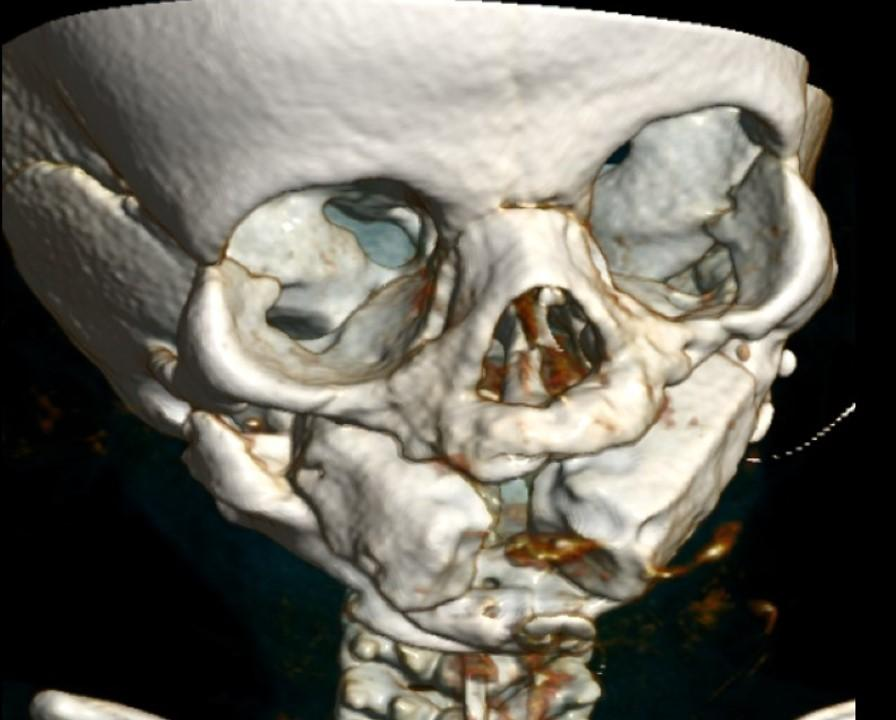 3D CT cranial bone reconstruction after the surgery in front view shows an appropriate separation of the maxilla, the mandible and the zygomatic arch.
Department of Radiology, Santa Lucia University Hospital, Cartagena, Murcia. 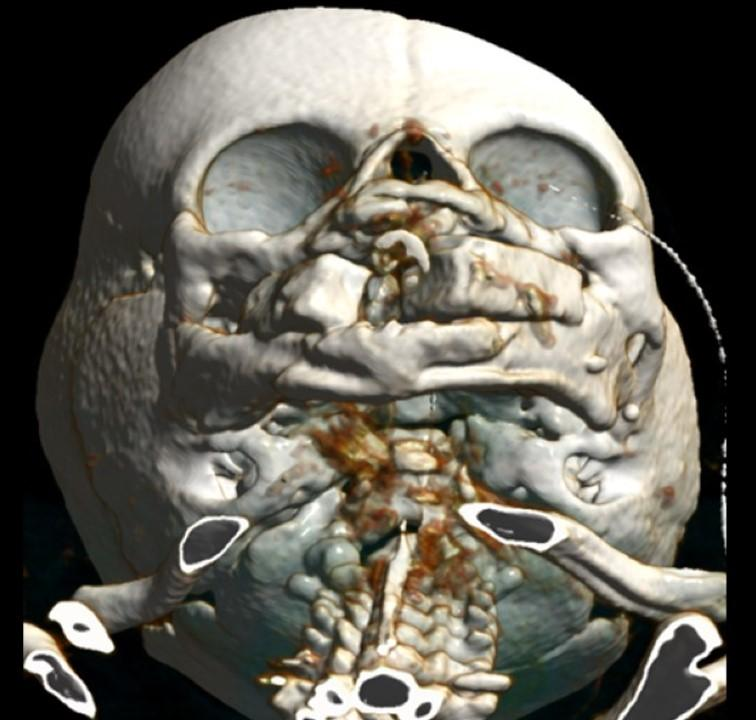