Categories
Area of Interest Lung, Thorax ; Imaging Technique Conventional radiography, CT
Procedure Diagnostic procedure ; Special Focus Atelectasis ;
Show more Show less
Download as PDF Print Show related cases Notify admin
Clinical History
A patient with a history of smoking was admitted due to heavy coughing, fever and general malaise.
Imaging Findings
The patient was initially submitted to a chest radiograph during the first clinical examination. The chest radiograph (AP) was consistent with loss of the right lung volume, with higher positioning of diaphragm and silhouette sign with the upper mediastinum, indicating upper right lobe atelectasis.
A chest CT was requested. In the chest CT, on the upper bronchus, a nodular lesion with about 1 cm, well-defined and spontaneously higher density than soft tissue was detected. No enhancement of the lesion was apparent (although definite visual assessment or ROI measurements was difficult due to the small size). No hypo-enhancing areas suspicious of neoplasm were detected in the collapsed lung.
Discussion
BACKGROUND
Non-asphyxiating airway foreign bodies is a problem more often associated with children, however in adults it can be difficult to diagnose as the symptoms are nonspecific.
Completely obstructing lesions may lead to air resorption of the obstructed lung resulting in atelectasis (whole lung, lobar or segmental atelectasis depending on the obstruction site).
Partially obstructing lesions – or when collateral air drift is possible - may mainly reduce air outflow resulting in airtrapping.
Most common large airway causes of resorption atelectasis consist of neoplasia (the most common and worrisome cause in adults); inflammatory (tubercular or fungal infection); and other causes, such as mucous plugs, or foreign bodies. [1]

CLINICAL PERSPECTIVE
In this case, an anomalous intraluminal lesion in a smoker raised concern for malignancy, despite some discrepant findings (such as non-enhancement and well-defined lesion).
The patient was submitted to bronchoscopic assessment, for diagnosis and if possible clearance of an obstructing cause.
In this case, successful retrieval of a baked bean was achieved.

IMAGING PERSPECTIVE
Imaging findings on obstructing lesions depend on the degree of obstruction. Direct signs of atelectasis are crowded pulmonary vessels, crowded air bronchograms, and displacement of the interlobar fissures.
Indirect signs of atelectasis are pulmonary opacification; elevation of the diaphragm; shift of the trachea, heart, and mediastinum; displacement of the hilus; compensatory hyperexpansion of the surrounding lung; approximation of the ribs; and shifting granulomas.

When air trapping is the main finding, lung hyperinflation occurs. This may be more easily detected on expiratory films (in children unable to comply, side decubitus may also work as a “forced expiratory” technique).

CT is the most precise technique for anatomical detection and characterisation of an obstructing lesion, and may allow distinction of a proximal obstructing lesion from adjacent mediastinal structures and lung after contrast administration as neoplastic lesions tend to not enhance as avidly as collapsed lung. [2]

In a previous case report, spontaneously hyperdense non-metalic foreign bodies in the stomach were noted in a patient who had previously eaten baked beans. [3] To our knowledge, this is the first time the CT appearance of an obstructing bean in the bronchus, that was retrieved, was described. 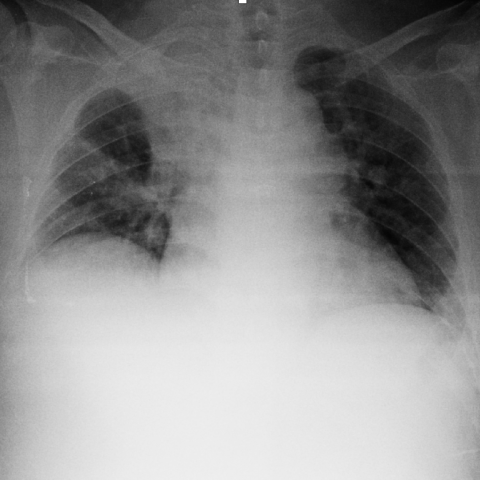 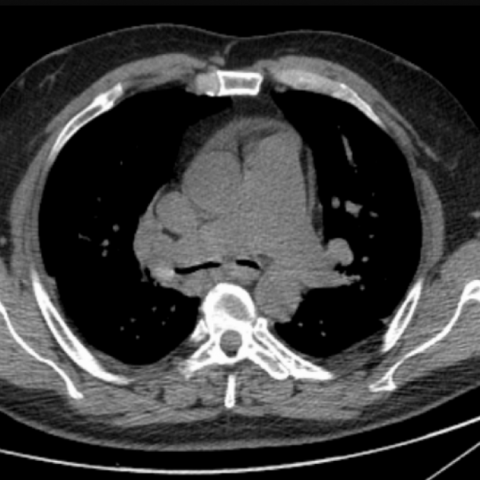 Axial reformat of non-contrast chest CT showing an hyper-attenuating small lesion at the emergence of the right upper lobe. 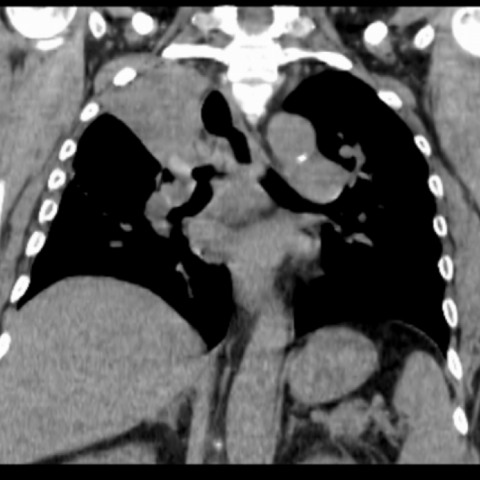 Coronal reformat of non-contrast CT showing no relation of the hyper-attenuating lesion to the interlobar bronchi, and further showing it's location in the upper lobe. 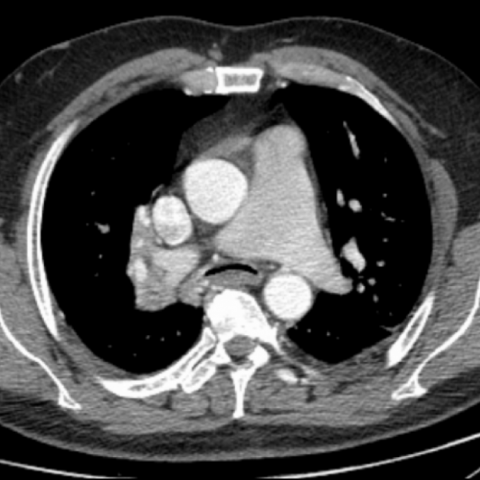 Post-contrast CT showed no visible lesion in the mediastinum, nor an existence of an hypo attenuating lesion comparing to the lung parenchyma. 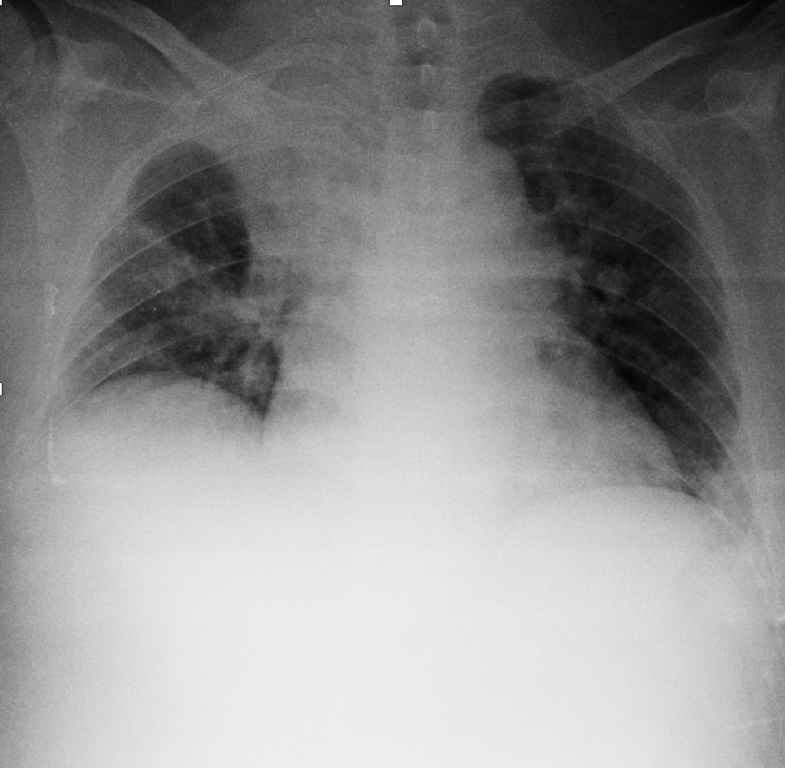 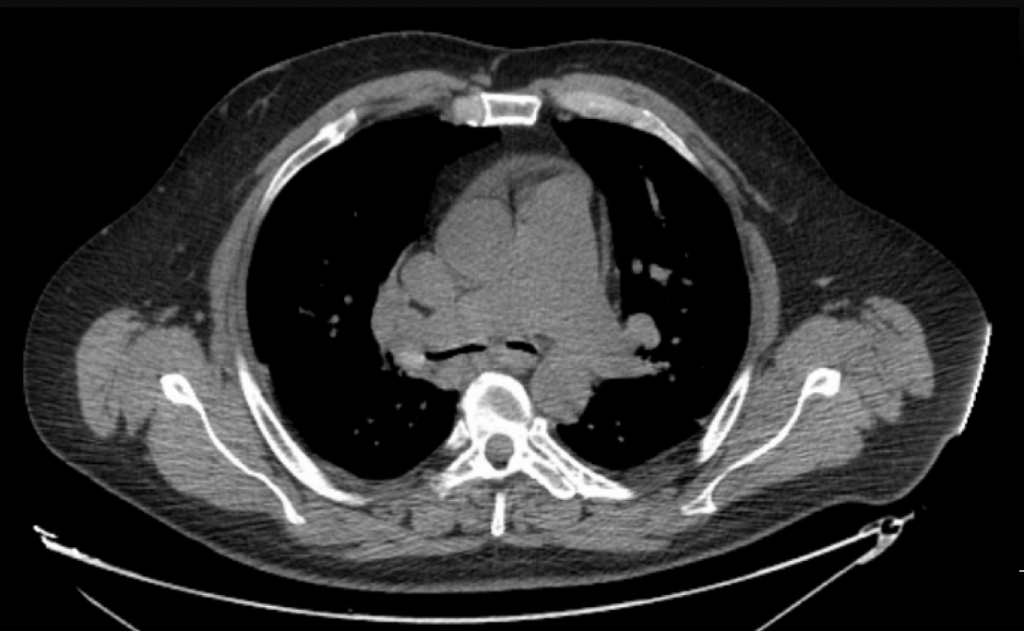 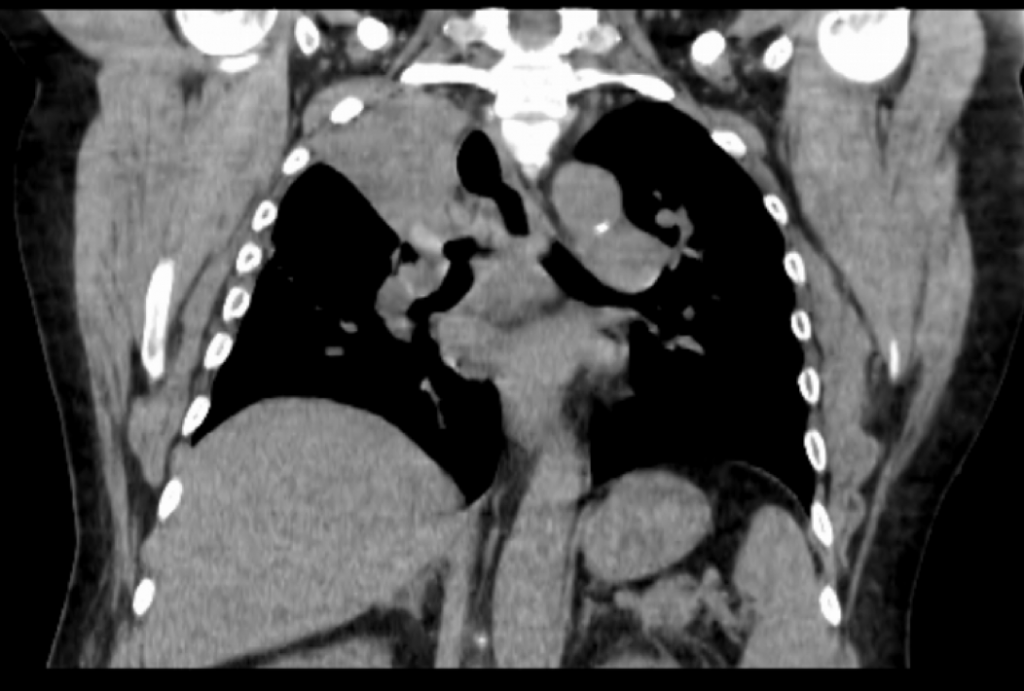 Coronal reformat of non-contrast CT showing no relation of the hyper-attenuating lesion to the interlobar bronchi, and further showing it's location in the upper lobe.
Serviço Imagem Médica, CHUC, Coimbra, PT 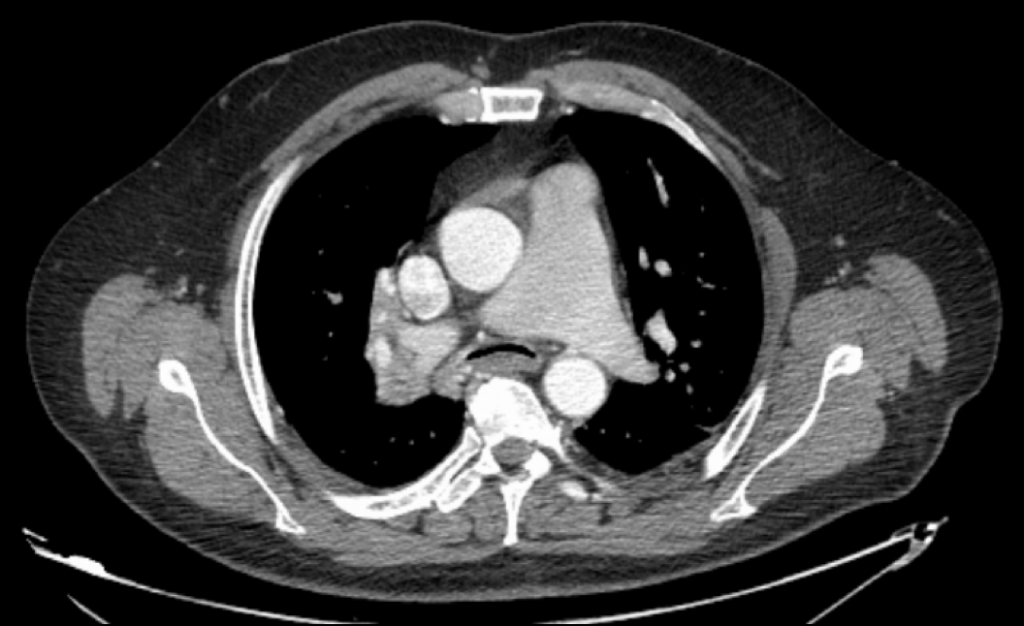 Post-contrast CT showed no visible lesion in the mediastinum, nor an existence of an hypo attenuating lesion comparing to the lung parenchyma.
Serviço Imagem Médica, CHUC, Coimbra, PT