Categories
Area of Interest Ear / Nose / Throat, Mediastinum ; Imaging Technique CT, Experimental
Procedure Education ; Special Focus Foreign bodies ;
Show more Show less
Download as PDF Print Show related cases Notify admin
Clinical History
An 84-year-old female patient with a low level of consciousness was referred to the emergency department due to a generally deteriorating condition, odynophagia, dysphonia and dyspnoea for four days. On physical examination, she presented with gross cervicothoracic subcutaneous emphysema. Initially, no symptom trigger (food intake or trauma) was communicated.
Imaging Findings
Cervicothoracic computed tomography (CT) with intravenous contrast was requested. It showed diffuse soft-tissue emphysema and a pneumomediastinum (Figures 1a-c). A calcified foreign body (FB) located in the oropharynx with a “U-shaped” morphology was identified (Figure 1a). Moreover there was left pyriform sinus perforation secondary to the FB (Figure 1b). On 3D reconstruction the form of a shell was identifiable (Figure 2). Endoscopy was performed and demonstrated the presence of a mussel shell covering the laryngeal inlet that was extracted by fibroscopy (Figure 3).
Discussion
Foreign body (FB) ingestion commonly occurs at the extreme of age: 60% of patients are <6 years and 15% occur in the elderly, in whom obtaining an accurate medical history may be difficult due to cognitive impairment [1]. In our case the patient could not initially relate the episode to recent food intake due to impaired consciousness. Later, when she regained consciousness, she admitted that symptoms started after eating mussels. The most frequently aspirated FBs are coins, batteries, needles, various sharps objects, food and bone fragments [1]. Typical symptoms include dysphagia, hypersialorrhoea, low cervical pain and chest pain, however up to 30% of patients are asymptomatic [1]. Pharyngooesophageal perforation due to FB aspiration is a very uncommon entity (1-4% of all aspirated FBs) [2]. In adults with a low level of consciousness the presence of dyspnoea, odynophagia, subcutaneous cervical emphysema or pain with vertebral and interscapular projection may suggest complications following FB aspiration, such as pharyngooesophageal perforation, obstruction, sepsis or tracheo-oesophageal fistula [1].

The first steps in making the diagnosis consist of clinical examination by direct inspection, fibroendoscopy and, in some cases, imaging. Due to the low sensitivity of x-rays, CT should be used when complications are suspected [2, 3, 4]. Treatment of airway obstruction must always take priority over imaging investigations and should not be delayed in stridulous patients.

The majority of ingested FB pass spontaneously. Only 20% of cases require non-operative intervention such as endoscopic removal, and 1% or less require surgery [2, 3, 4]. In our case the FB was first extracted endoscopically. Then surgical review was performed confirming perforation of the pharyngeal-oesophageal junction which was treated conservatively. No further complications or mussel fragments were noted. The patient was admitted to the intensive care unit with antibiotics and supportive treatment. A CT examination performed 48 hours later showed a reduction in the amount of subcutaneous emphysema and pneumomediastinum. After 8 days the patient was discharged home. 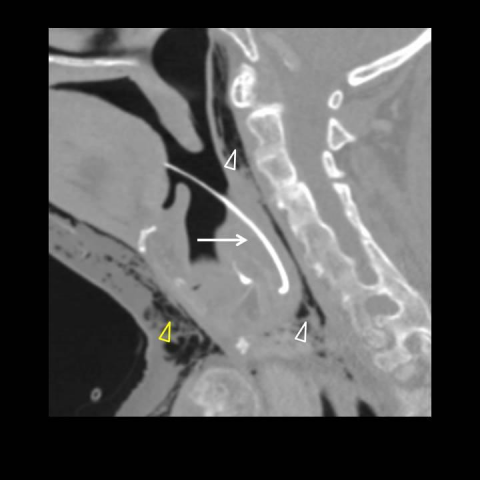 Sagittal-CT. Diffuse soft-tissue cervical emphysema (yellow arrowheads), with retropharyngeal air up to the skull base (white arrowheads) and a calcified foreign body located in the hypopharynx with “U” morphology (white arrow) covering the laryngeal inlet. 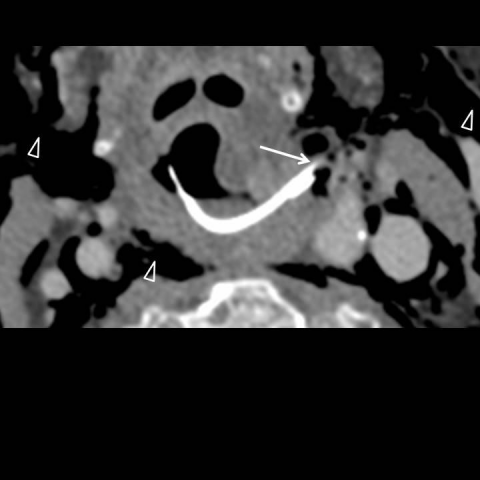 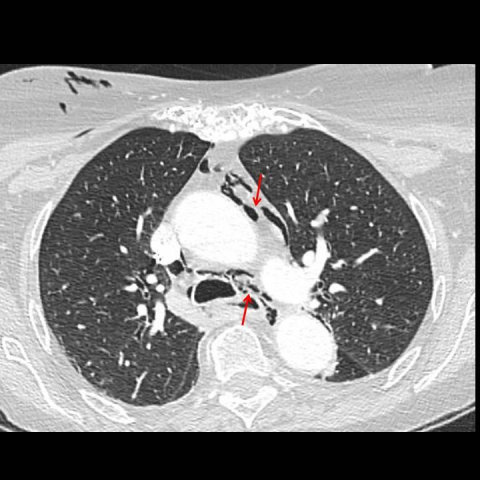 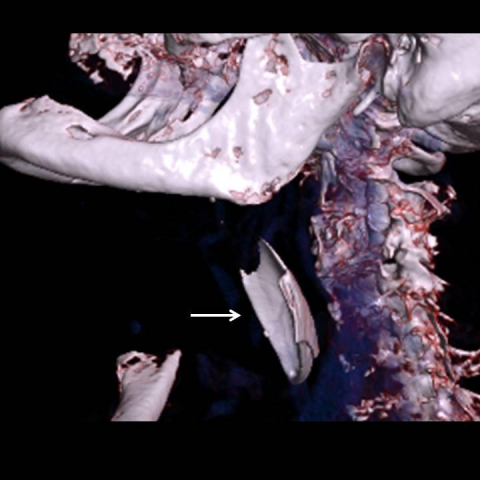 The foreign body has a characteristic shell form.
Figure 3 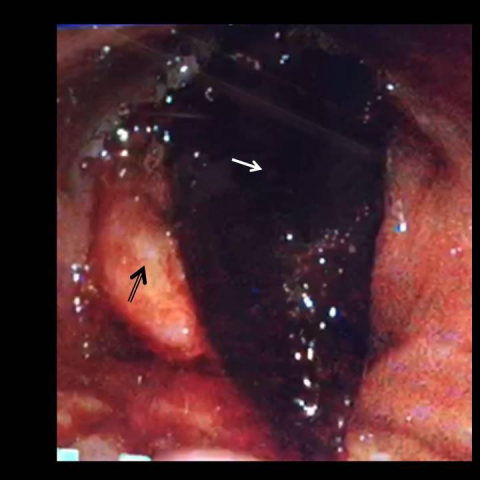 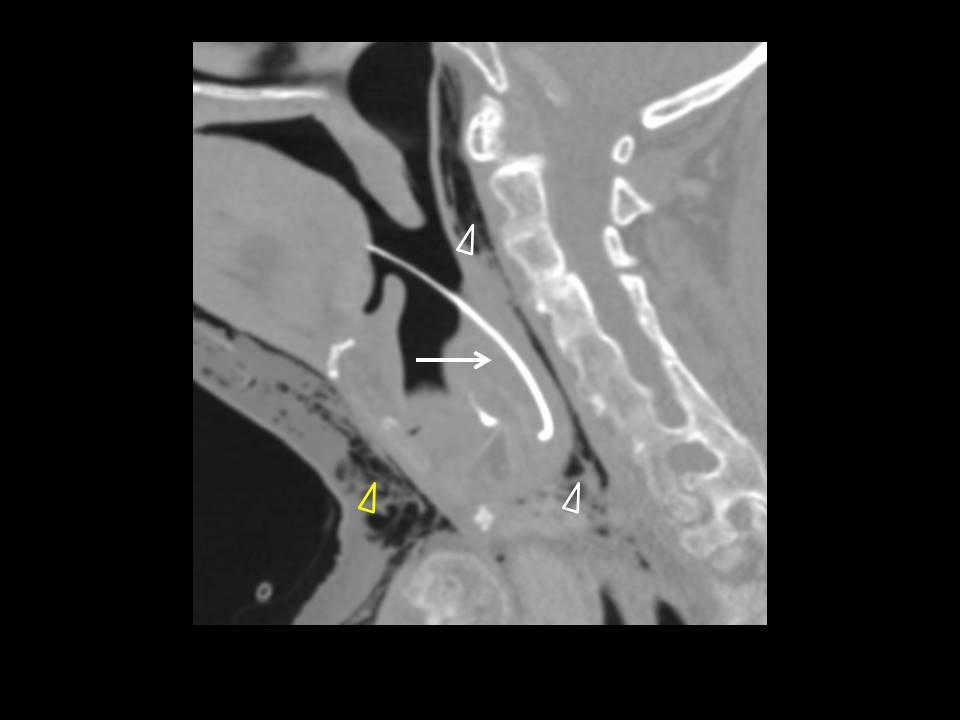 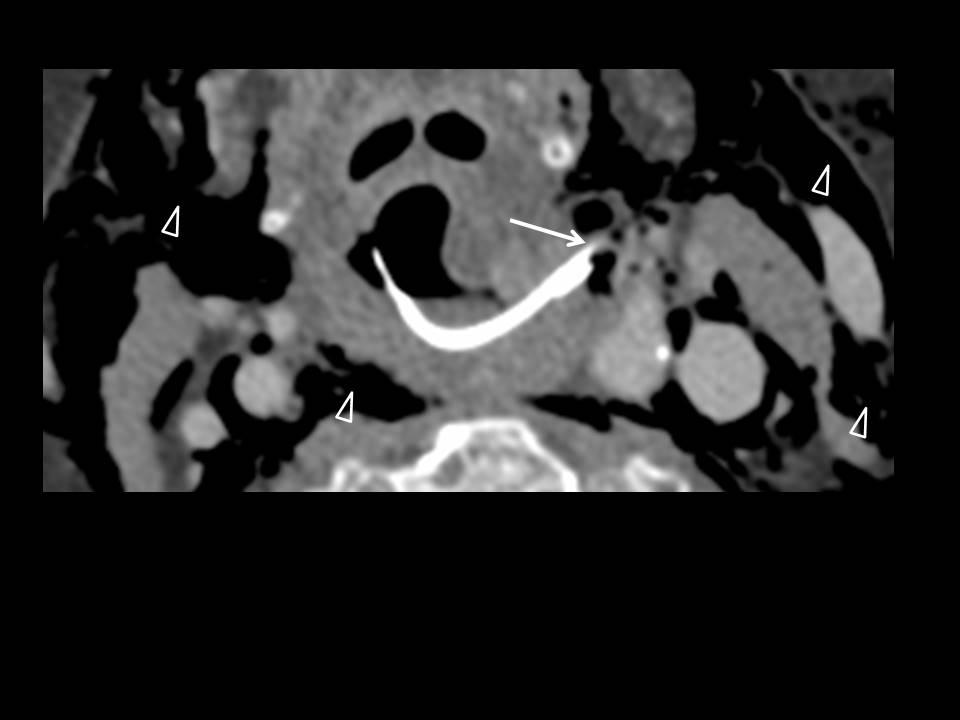 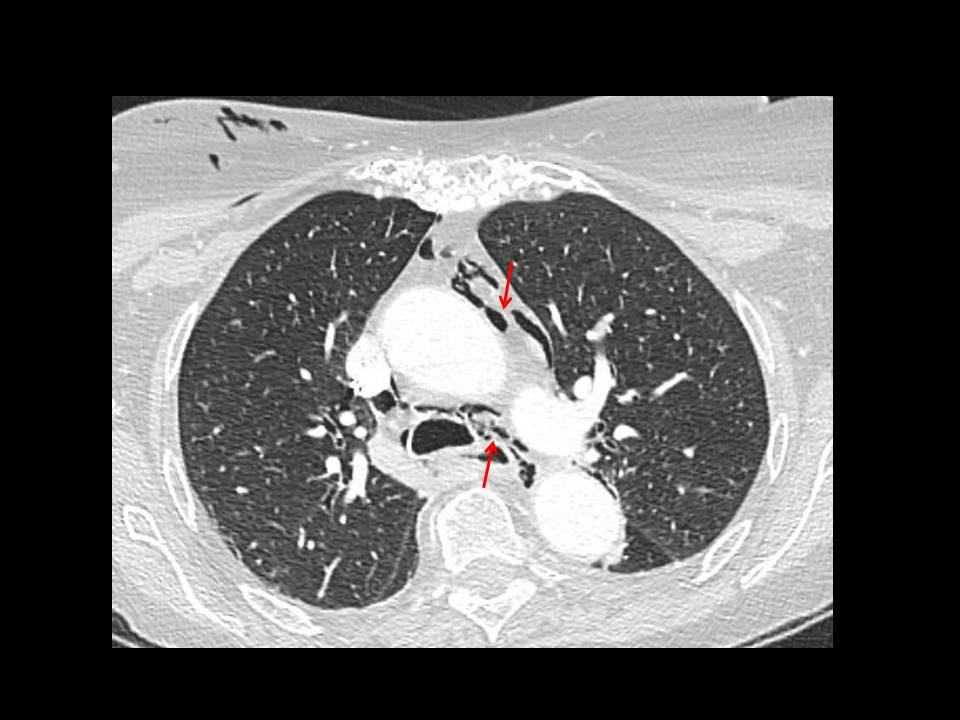 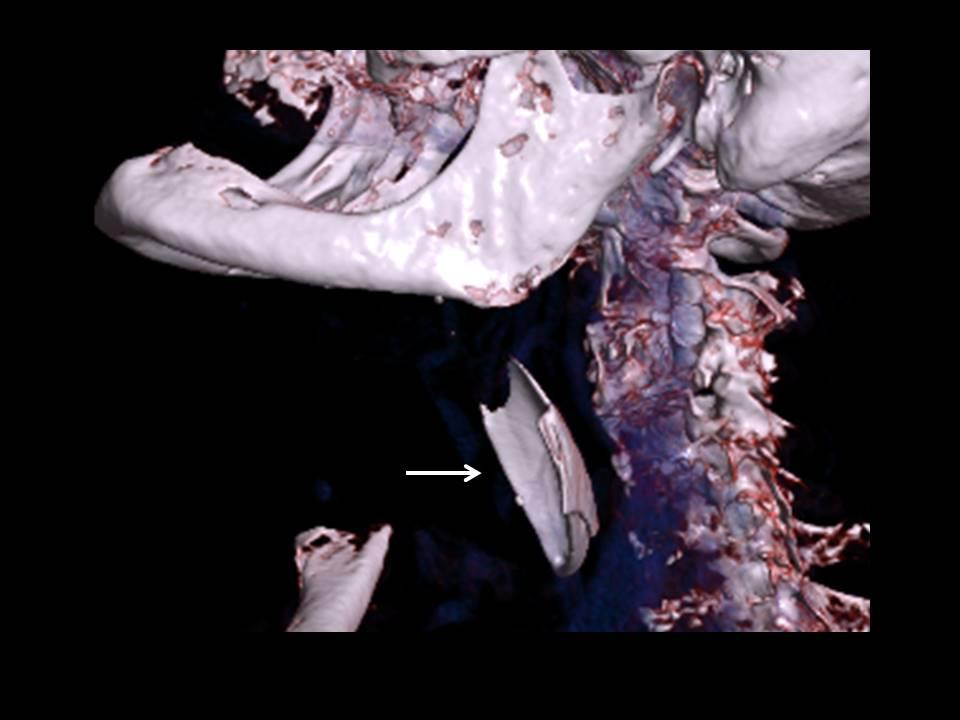 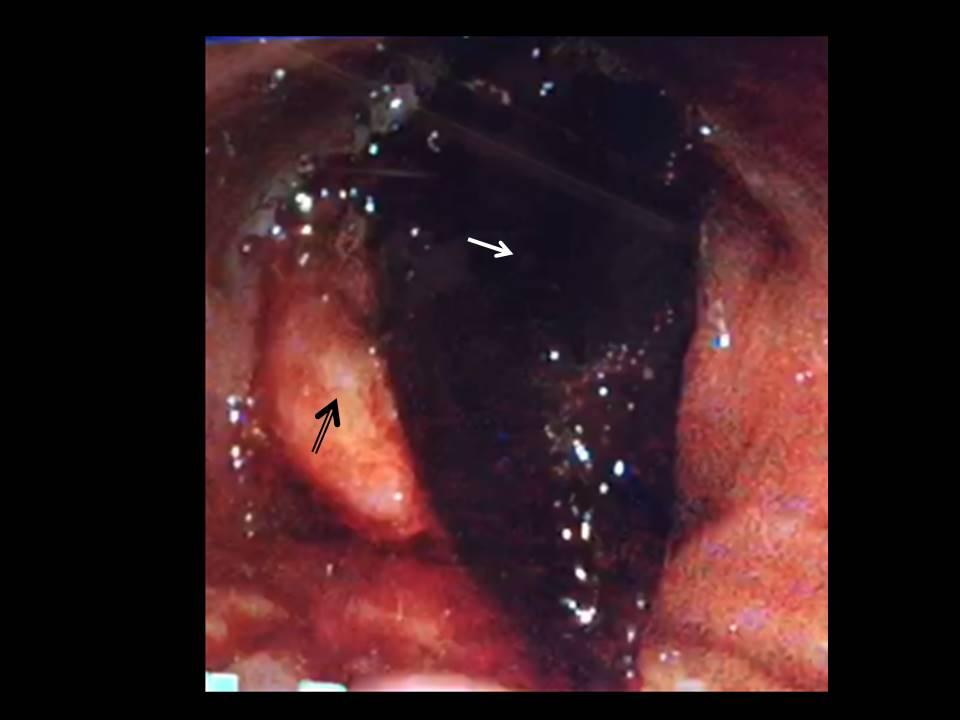