Categories
Area of Interest Breast ; Imaging Technique Ultrasound, Mammography
Procedure Diagnostic procedure ; Special Focus Neoplasia ;
Show more Show less
Download as PDF Print Show related cases Notify admin
Clinical History
A 23-year-old nurse presents two months after delivery with a palpable, painless lump in the lower quadrants of the left breast, which had been detected during the third trimester of pregnancy.
Imaging Findings
On ultrasound, performed two months after delivery, this was a 29 mm oval mass, isoechoic, with smooth margins and posterior enhancement (Fig 1). Since it was a de novo lesion, an ultrasound guided biopsy was performed and pathological evaluation revealed a lactating adenoma. Nine months after the first ultrasound, the lesion had reduced to 14 mm (Fig 2). At this point, a mammography was performed, which showed a well-defined, low density mass in the lower quadrants of the left breast (Fig 3). About a year and a half after the first ultrasound examination, the lesion had reduced to 10 mm (Fig 4).
Discussion
Lactating adenoma is one of the most common lesions arising in pregnant young women, usually during second and third trimesters. They only occur during pregnancy and puerperium and usually regress spontaneously after delivery and lactation [1]. Sometimes they reappear in following pregnancies [7].
These lesions are rare benign entities with uncertain origin, that are believed to arise in response to the physiologic changes that occur during pregnancy and lactation [2].
Some authors consider lactating adenomas just fibroadenoma, tubular adenoma, or lobular hyperplasia that undergo histologic changes as a result of the hormonal state [3]. However, the actual consensus is that they are tubular adenoma with lactational changes [4, 7].
Although there is no known risk of malignancy, there are some rare reports of invasive carcinoma arising on the location of a previously excised lactating adenoma or occurring simultaneously [4, 5].
Necrosis and haemorrhage are present in only 5% of lesions, as a result of infarction due to relative vascular insufficiency associated with a high vascular requirement of the breast during pregnancy and lactation [5].
Fine-needle aspiration or core needle biopsy are used to characterise these lesions. Histologically, lactating adenomas are lobulated masses, well-circumscribed and noncapsulated. They are composed of aggregates of secretory lobules separated by delicate connective tissue. The secretory hyperplasia seen in these lobules, including cells with granular, foamy or vacuolated cytoplasms, is similar to the changes found in the surrounding parenchyma [6].
Radiologically, they typically present as benign lesions, indistinguishable from fibroadenomas. On ultrasound, the lactating adenoma features are variable. As in the presented case, usually it presents as an oval or slightly lobulated mass, homogeneous and hypoechoic or isoechoic, with smooth margins [5] and posterior acoustic enhancement. They can contain cystic or necrotic areas. Mammographically, they show a well-defined lobulated mass without calcifications [7]. Occasionally, they exhibit hyperechogenic areas on ultrasound and radiolucent areas on mammography which represents the fat content of the milk secondary to lactational hyperplasia, and is a diagnostic sign [2]. However, in rare cases, lactating adenoma present as highly hypoechoic or heterogeneous masses, with irregular or microlobulated margins and posterior acoustic shadowing, raising suspicion of malignancy. These features are probable related to infarcted areas [2].
The management of lactating adenoma includes follow-up and/or biopsy. Follow-up in 3 to 6 months is recommended, even after histological proof [7].
Differential Diagnosis List
Lactating adenoma
Fibroadenoma
Galactocoele
Final Diagnosis
Lactating adenoma
References 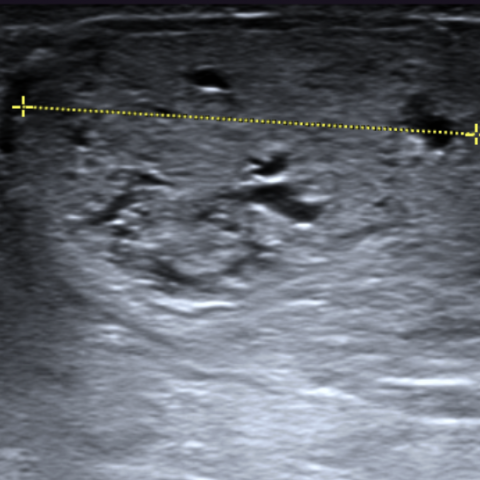 The first ultrasound examination showed an oval isoechoic mass, with cystic areas, long axis parallel to the skin, smooth margins and posterior enhancement, measuring 29 mm, in the the lower quadrants of the left breast.
Figure 2 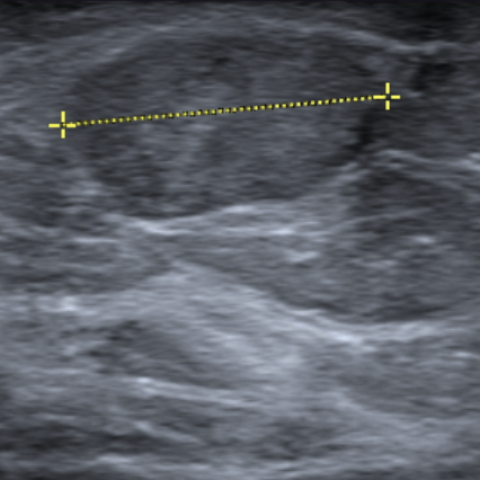 Nine months after the first ultrasound, the lesion had reduced to 14 mm.
Figure 3 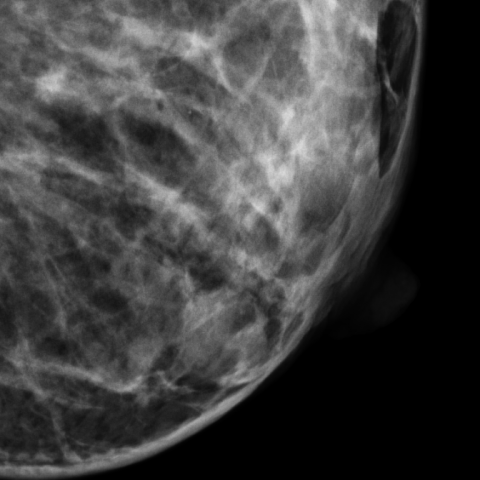 Nine months after the first ultrasound, mammography showed a well-defined, low density mass with fat content, in the lower quadrants of the left breast.
Figure 4 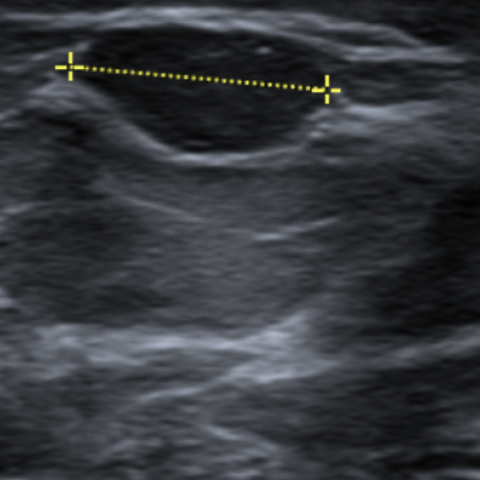 About a year and a half after the first ultrasound examination, the lesion had reduced to 10 mm. 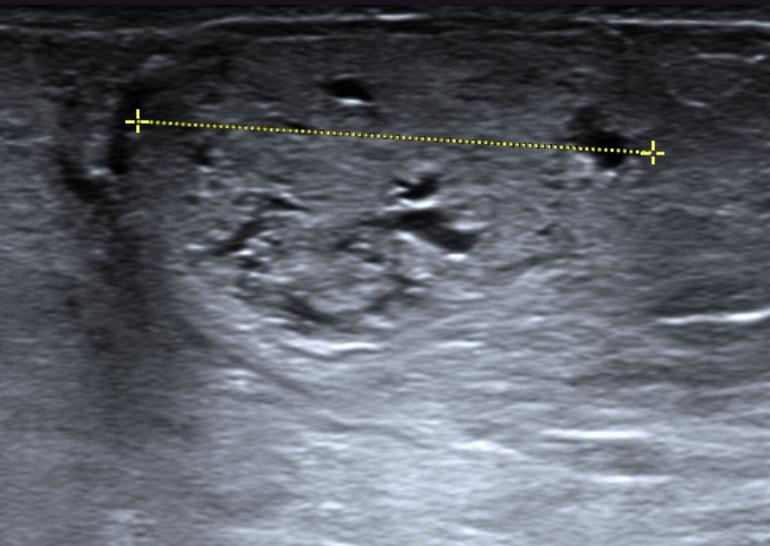 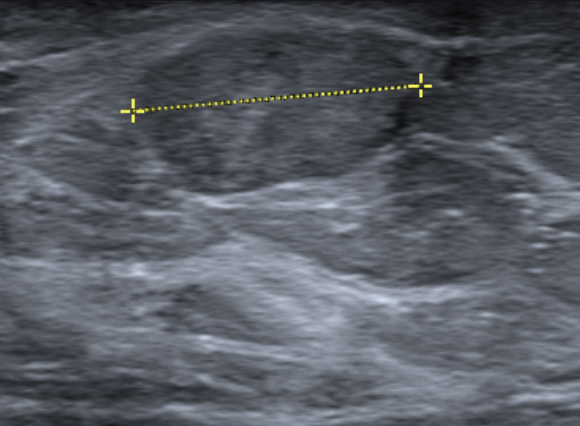 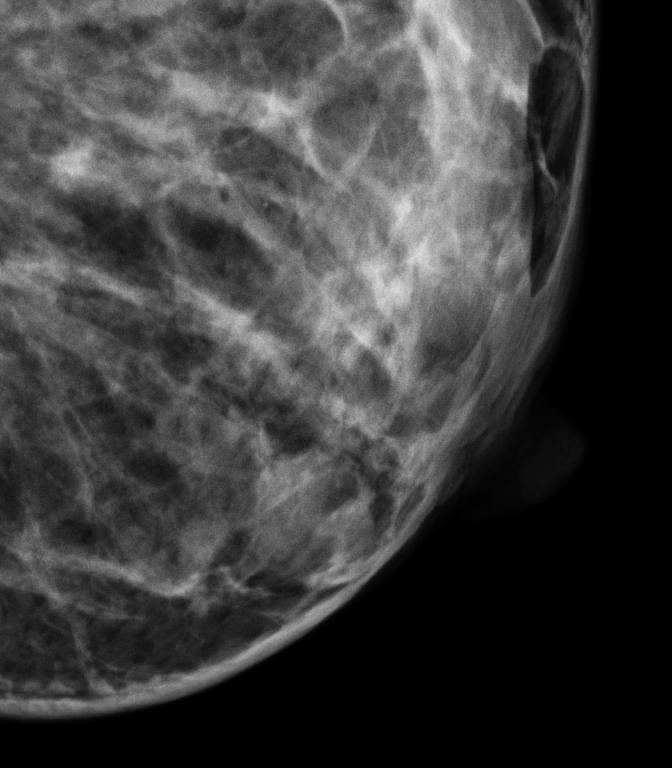 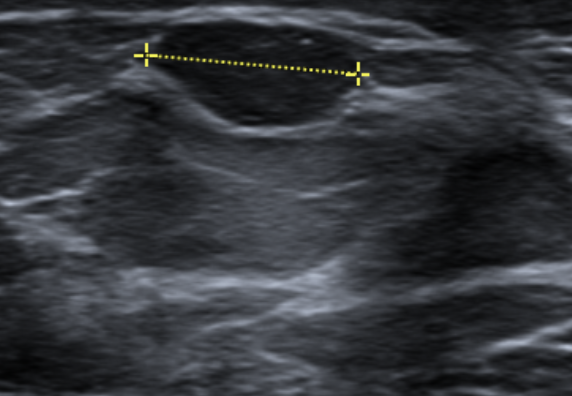 About a year and a half after the first ultrasound examination, the lesion had reduced to 10 mm.
Serviço de Imagem Médica, Centro Hospitalar e Universitário de Coimbra, Coimbra, Portugal