A lunch that comes back

Categories
Area of Interest Abdomen ; Imaging Technique Percutaneous, CT, Digital radiography, Image manipulation / Reconstruction
Procedure Surgery, Diagnostic procedure, Computer Applications-3D ; Special Focus Foreign bodies ;
Show more Show less
Download as PDF Print Show related cases Notify admin
Clinical History
An 84-year-old male patient was admitted to the Emergency Department with right flank pain, fever for 2 days and vomiting. Upon physical examination, the patient complained about pain at shallow palpation and showed reduced peristalsis at deep palpation. Blood tests revealed slightly increased CRP. No previous abdominal surgery was reported.
Imaging Findings
Plain X-ray showed an ileal loop in the periumbilical region with hydro-aerodynamic levels, but no abdominal free air. Because of persistent abdominal pain, abdominal CT was performed. A linear hyperdense image of 4 cm, highly suspicious for a foreign body was found in right periumbilical subcutaneous region, likely located in the distal ileum. There were only jejunum-ileum meteoric distension found upstream and downstream of this loop, without perforation signs. The foreign body seemed to pass through the bowel walls, like a needle. The appendix was not identifiable and multiple sigmoid diverticula were described.
The patient did not recall ingesting any foreign body during previous weeks.
During laparoscopic examination a distal ileum loop, 10 cm upstream of the terminal ileum, was found perforated from side to side by a foreign body (chicken bone), surrounded by an abundant turbid fluid. Ileum resection and ileal-ileal anastomosis were performed. The patient was dismissed 6 days after in good condition.
Discussion
Small bowel perforation is an emergency medical situation, and is only rarely diagnosed clinically, especially in silent perforation as in the present case [1]. Although ingestion of an indigestible foreign body is common, intestinal perforation as a result is relatively rare. Most foreign bodies pass through the gastrointestinal tract without complications, fewer than 1% resulting in perforation; those that cause perforation are usually either sharp or elongate, such as dentures, fish bones, chicken bones, toothpicks and cocktail sticks [2, 3].
The patients at increased risk are those with previous bowel pathology (diverticulitis or intestinal stricture that stops progression) or psychiatric patients, alcoholics, children and elderly wearing dentures – as in our case, since the tactile sensitivity of soft palate is diminished and so the foreign body goes unnoticed.
The most common site of perforation is the ileocecal region (up to 83%), although it can be found all over the alimentary tract, mostly at points of physiological angulations or narrowing (for example zones with adhesions or previous surgical anastomosis).
The clinical presentation is variable and often poses a diagnostic challenge. Because the majority of patients do not recall ingesting the foreign body, it is being discovered either on investigation (abdominal X-ray or CT), or during an operation [3]. Signs and symptoms include abdominal pain, nausea, vomiting, fever, peritonitis, local abscess formation, fistula formation, mechanical bowel obstruction, and gastrointestinal bleeding [2].
The perforation process caused by the progressive impact of the foreign body is usually slow, allowing the perforation site to be covered by fibrin and adjacent loops, and prevents the leakage of extensive quantities of fluid or gas [4]. In addition, in almost 50% of cases of small bowel perforations free air is not present, as in our case.
For this reason, a plain radiography of the abdomen is often unrevealing. It might only show signs of a small bowel obstruction and could not identify the foreign body unless it is sufficiently hyperdense. Although chicken or fish bones may be sufficiently ‘bright’ to be found on abdominal plain film, a large amount of soft tissue or fluid may obscure their minimal calcium contents [4].
CT is more useful, having a high accuracy in identifying the location of the intestinal perforation, detecting the foreign body and any associated complication, such as abscess and obstruction. Common CT findings include localised pneumoperitoneum, free fluid, distension of the intestinal lumen, an intestinal segment with a thickened wall at the point of foreign body impaction, and increased mesenteric fat density.
Differential Diagnosis List
Perforation of a distal ileum loop by a foreign body (chicken bone).
Bowel perforation
Acute appendicitis
Final Diagnosis
Perforation of a distal ileum loop by a foreign body (chicken bone).
References 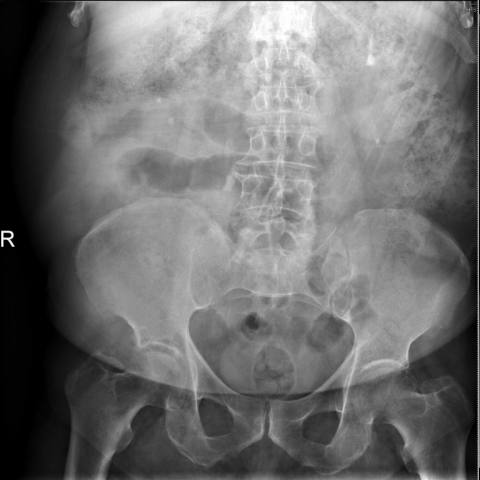 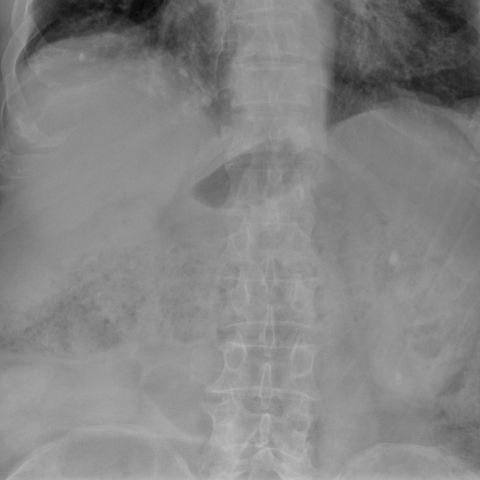 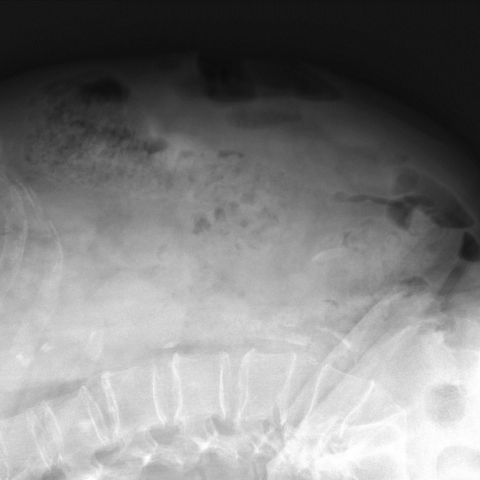 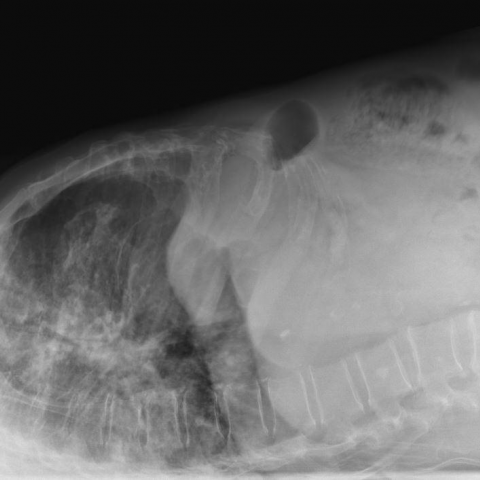 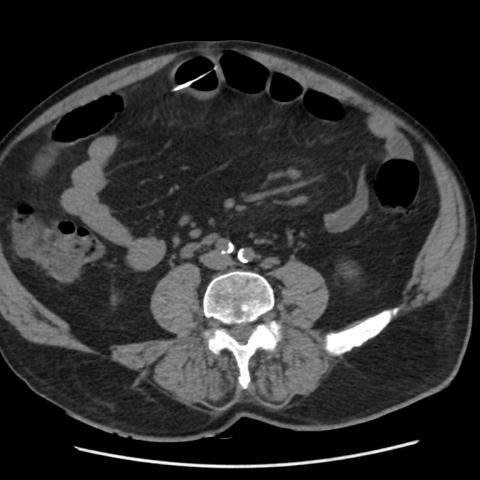 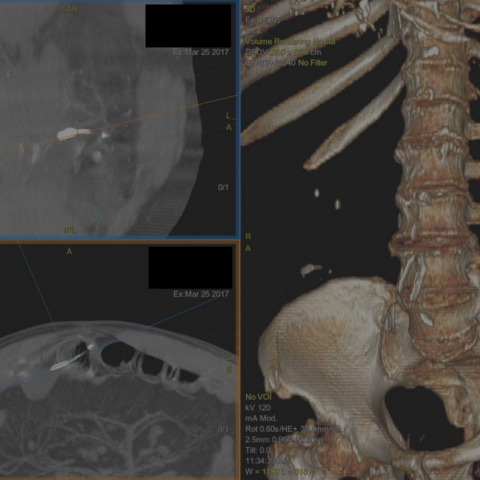 CT MIP image and Volume Rendering show an hyperdense image that seems to pass through the bowel walls, like a needle, in the righet paramedian paraumbelical region.
Figure 4 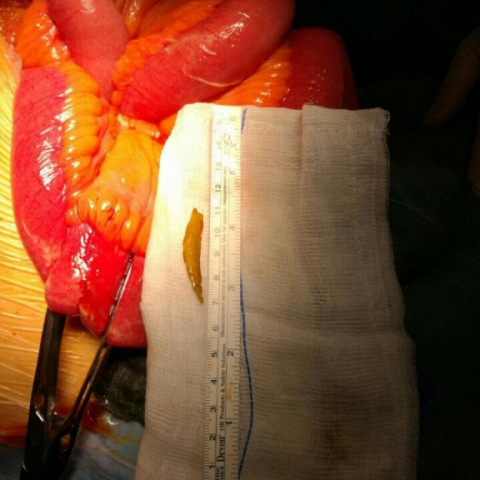 Intraoperative picture demonstrating the removal of a chicken bone from a distal ileal loop. 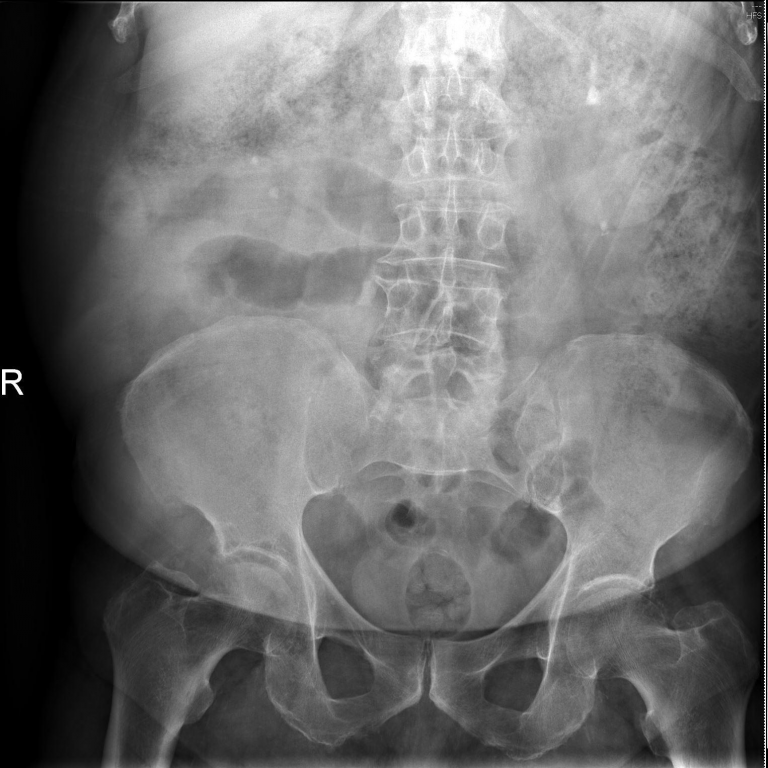 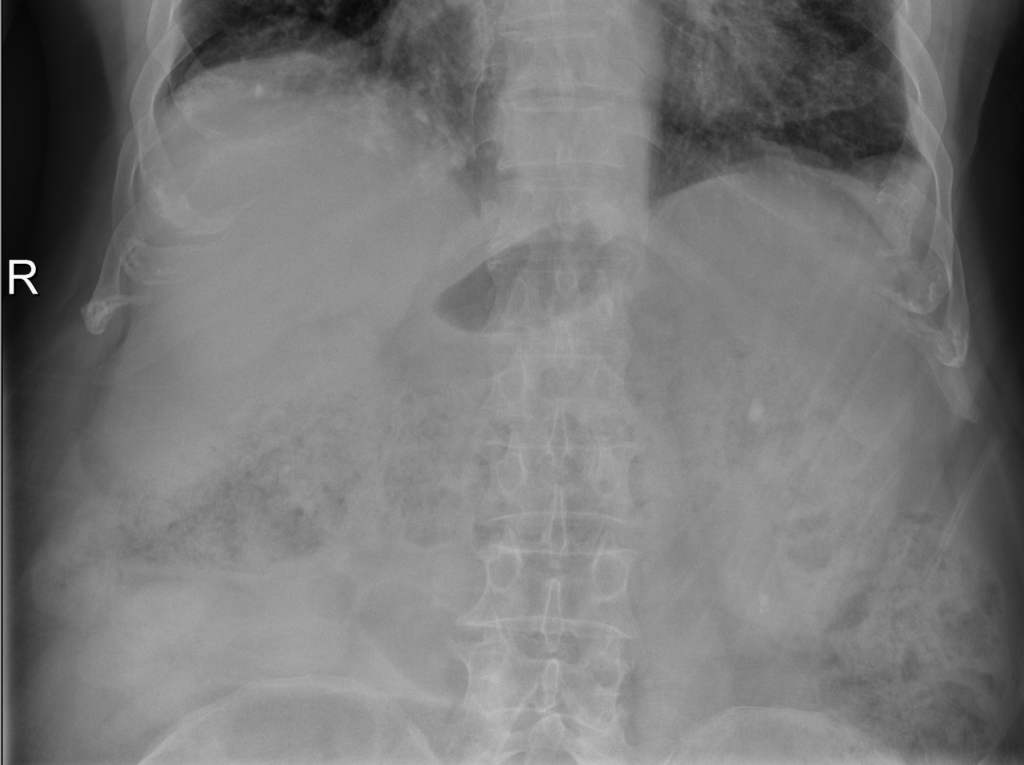 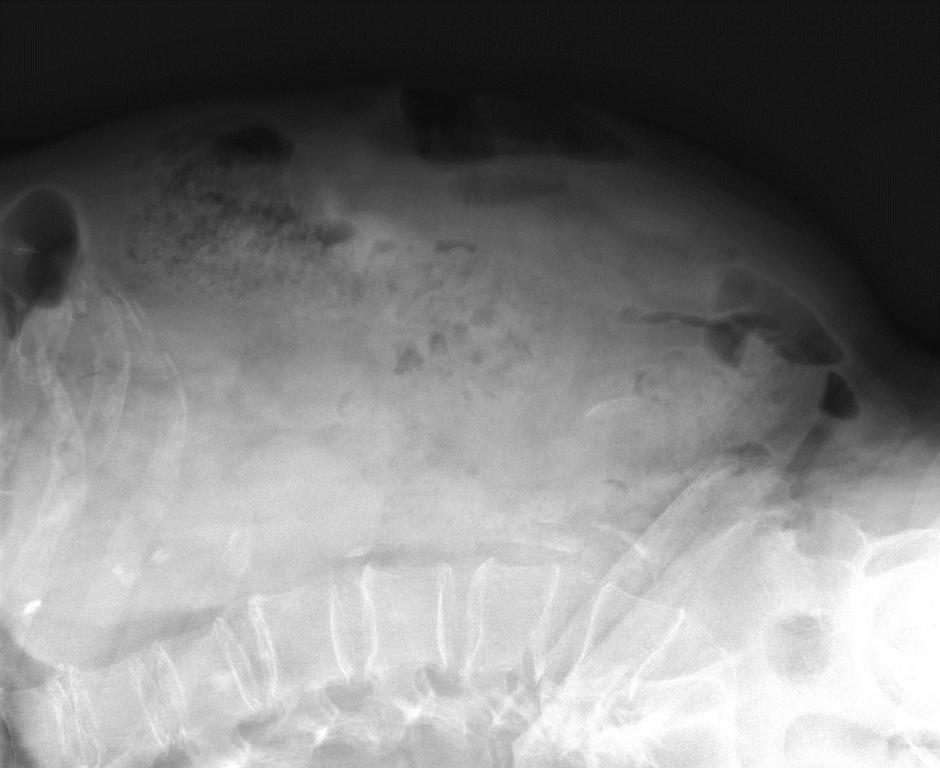 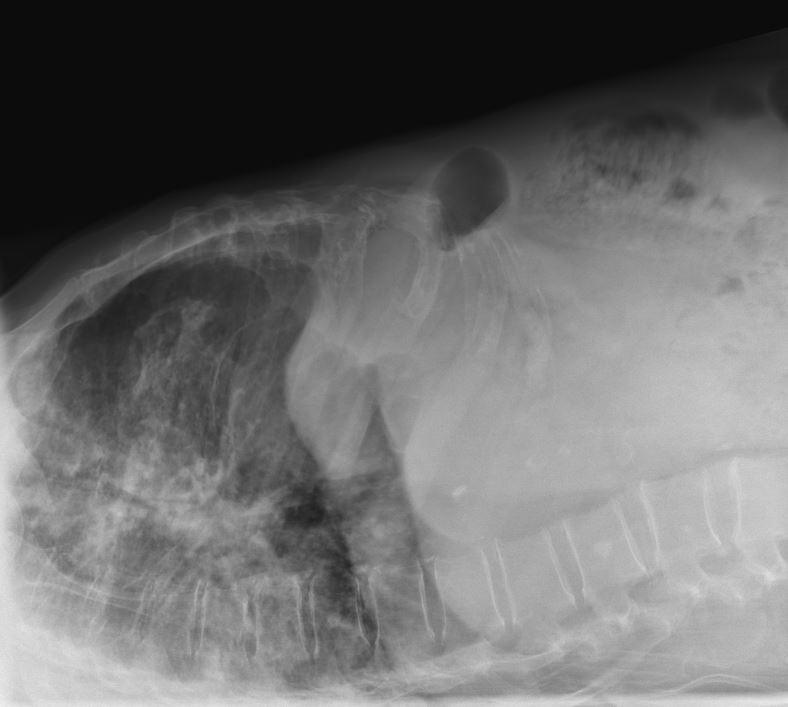 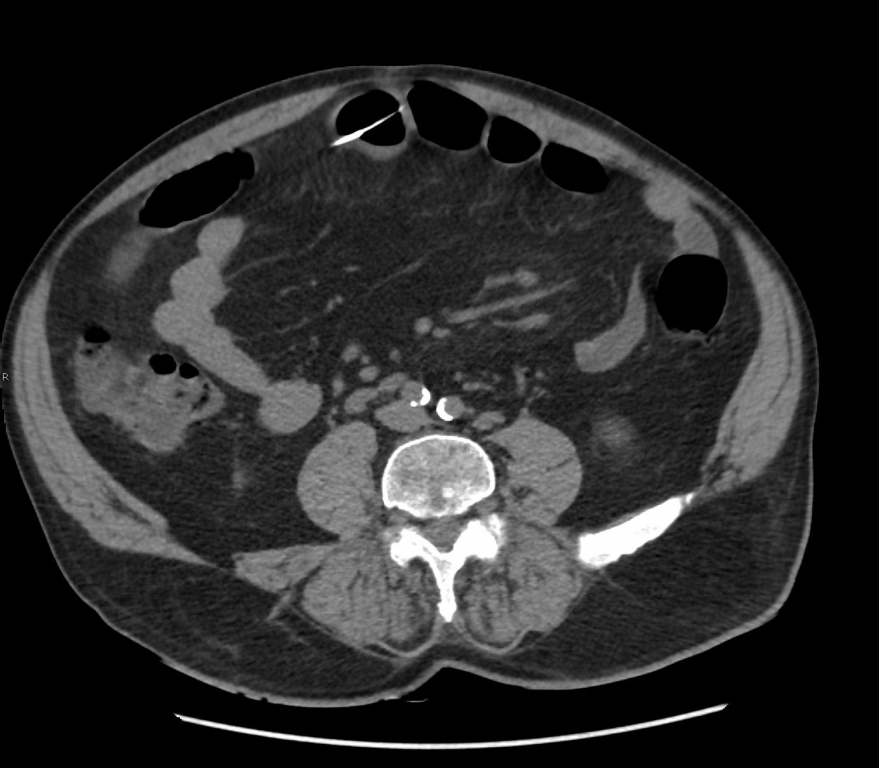 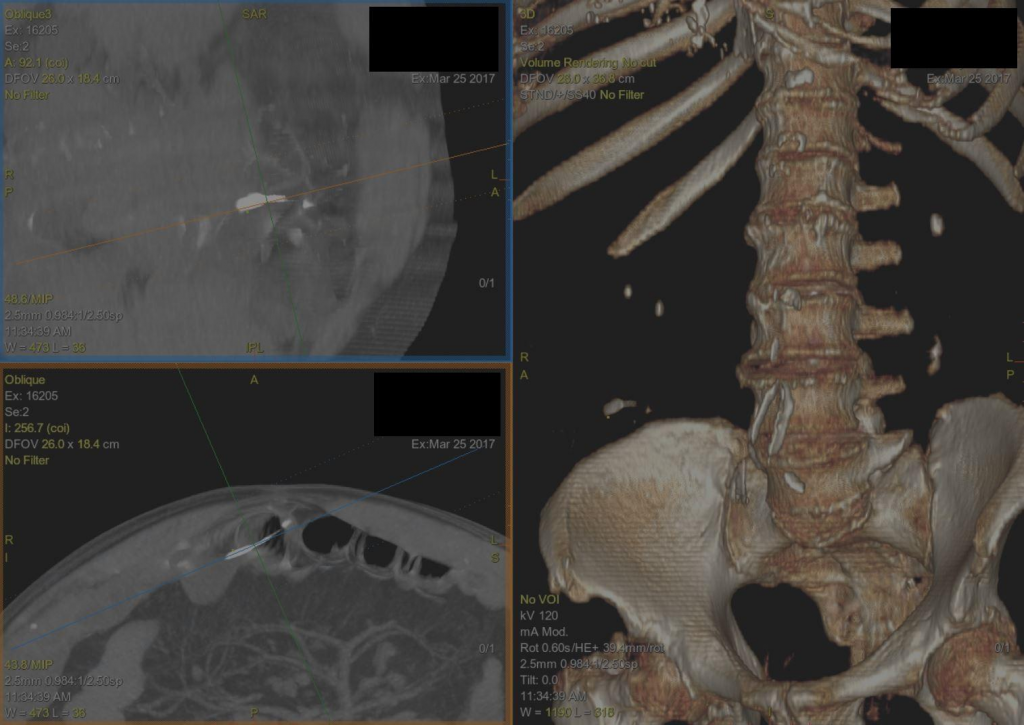 CT MIP image and Volume Rendering show an hyperdense image that seems to pass through the bowel walls, like a needle, in the righet paramedian paraumbelical region.
University of Modena, Department of Radiology, Modena, Italy 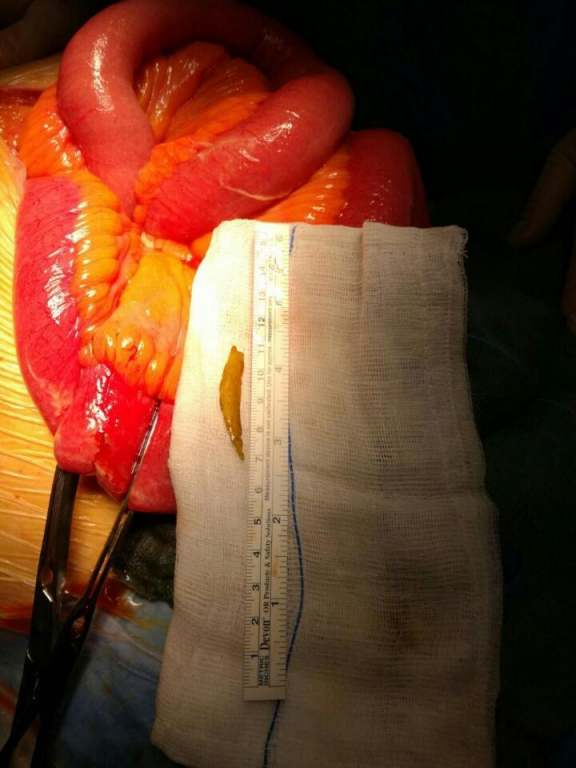 Intraoperative picture demonstrating the removal of a chicken bone from a distal ileal loop.
University of Modena, Department of Radiology, Modena, Italy