Pneumoperitoneum due to colonic rupture

Categories
Area of Interest Abdomen ; Imaging Technique CT
Procedure Imaging sequences, Colonography CT ; Special Focus Acute ;
Show more Show less
Download as PDF Print Show related cases Notify admin
Clinical History
A 58-year-old female patient who had been operated for ovarian carcinoma 2 months before presented with distension of abdomen and with fever for 1 week and was referred for contrast-enhanced CT.
Imaging Findings
Contrast-enhanced CT of the abdomen and pelvis showed a large air fluid level (Fig. 1). There were also subcutaneous emphysematous changes at the laparotomy incision site (Fig. 2). A large rent can be seen in the left lower abdomen in the colonic wall possibly at the anastomotic site (Fig. 3). There were few other peritoneal and serosal deposits along the colon elsewhere [not shown here]. There was associated thickening of the colonic wall, which could represent serosal deposit. The colonic wall adjacent to the rent also showed significant thinning (Fig. 4). There was bilateral moderate pleural effusion with basal atelectatic changes in the lower thoracic sections. Heterogenously enhancing lesion was also noted in the subcapsular region of the liver in segment 7 suggestive of metastasis (Fig. 5). Coronal reformatted image showed colonic wall thickening with a large defect (Fig. 6).
Discussion
Pneumo-peritoneum is common due to perforation of the small bowel. Perforation of the large bowel resulting in pneumo-peritoneum is rare. Less than 100 cases have been reported with a stercoral perforation of the large bowel, which means perforation occurring in a diseased bowel [1]. Incidence of anastomotic rupture of the colon is around 2% to 5% [2]. Perforation of the large bowel is more serious with increased mortality and morbidity due to faecal contamination of the peritoneum. Faecal peritonitis causes a morbidity of 50 % [3].
Our patient with ovarian carcinoma had been operated 2 months before with bilateral salphingo-oophorectomy with partial resection of transverse colon and end to end anastomosis with the descending colon (as serosal deposits were found during surgery). She came with the history of distension of the abdomen, pain in the abdomen and fever over the course of one week. The clinician suspected intestinal obstruction and advised CECT. However, large pneumo-peritoneum was seen with air-fluid level in the mid-abdomen with extensive fluid throughout the peritoneum with a defect in the postero-medial wall of the descending colon, which communicated with the peritoneal cavity as highlighted in the images. There was thinning of the colon adjacent to the defect. A diagnosis of colonic rupture with pneumo-peritoneum was made probably at the anastomotic site. The concerned clinician was informed and the patient was advised to undergo immediate surgery. However, the patient was diagnosed with septicaemia and the patient’s clinical condition deteriorated. Since the consent for surgery was delayed by the patient, the surgery could not be performed on time and the patient expired.
Weakened colonic wall due to serosal deposits are prone for perforation and leakage after surgery. There are no cases reported showing large bowel perforation due to serosal deposits, however, few cases with small bowel perforation due to serosal deposits are reported in the literature[4].
Ruptured colon with pneumo-peritoneum is a surgical emergency which needs immediate intervention. Prompt diagnosis by imaging and immediate surgical attention would be lifesaving.
Differential Diagnosis List
Pneumo-peritoneum due to ruptured colon at the anastomotic site.
Perforation of gastric ulcer
Perforation of small bowel
Final Diagnosis
Pneumo-peritoneum due to ruptured colon at the anastomotic site.
References 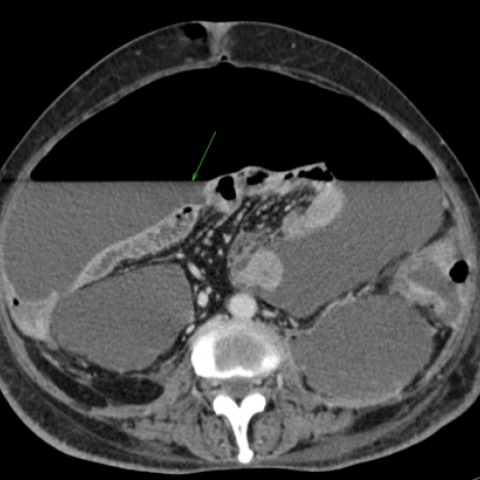 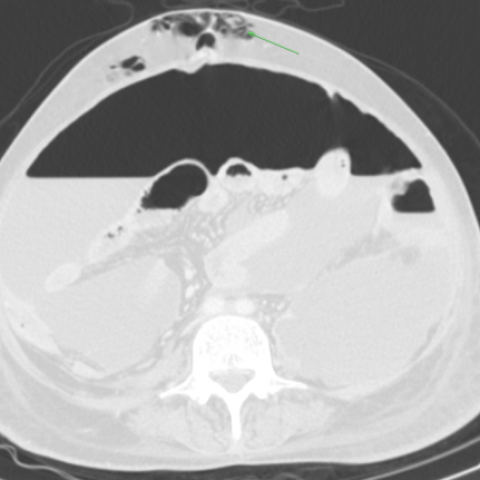 Air pockets also noted in the subcutaneous region in the midline at the site of incision (arrow). Image in lung window better delineates free air in the abdomen.
Figure 3 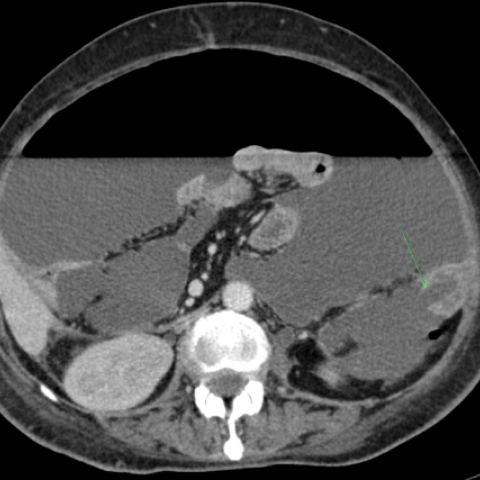 Axial CECT image shows defect in the colonic wall with thickening and heterogenous enhancement at site of perforation.
Figure 4 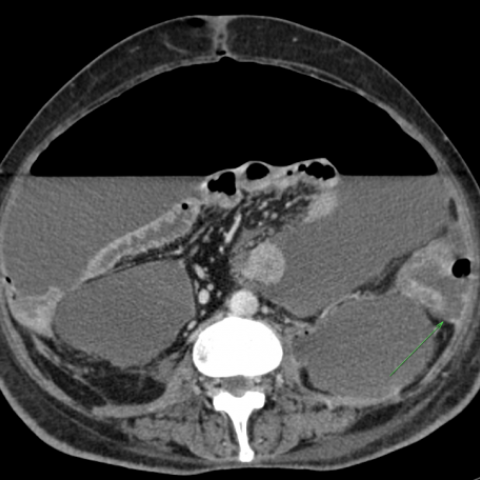 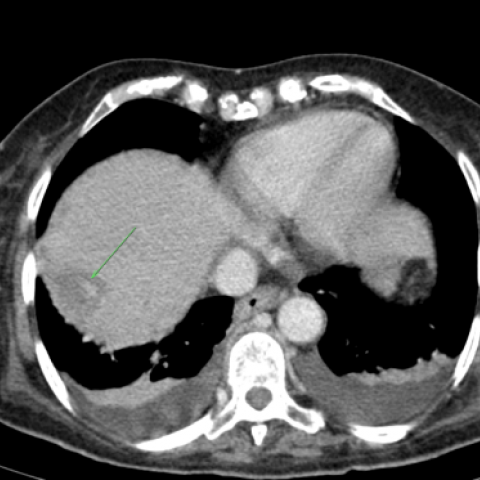 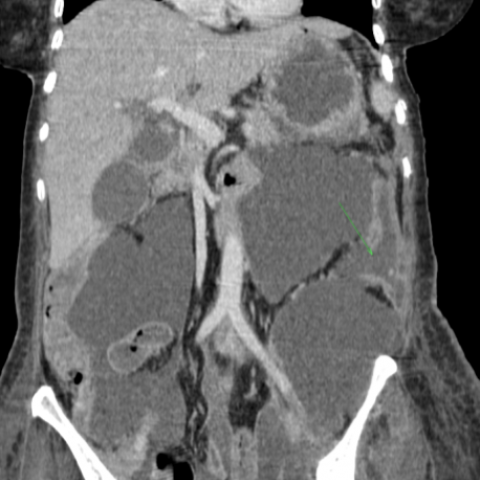 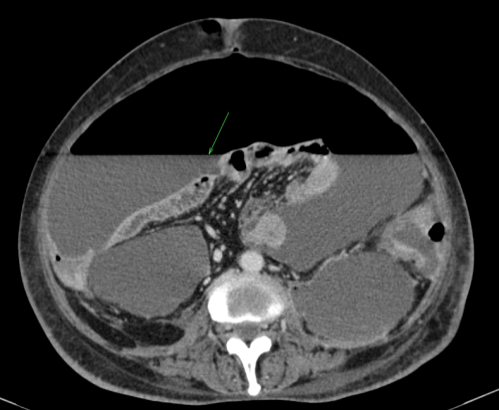 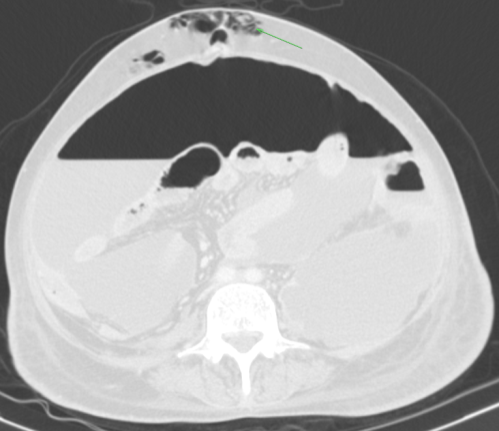 Air pockets also noted in the subcutaneous region in the midline at the site of incision (arrow). Image in lung window better delineates free air in the abdomen.
Kidwai meorial institue of oncology 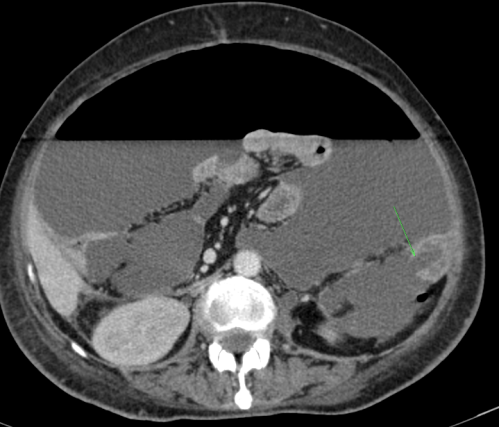 Axial CECT image shows defect in the colonic wall with thickening and heterogenous enhancement at site of perforation.
Kidwai memorial institute of oncology 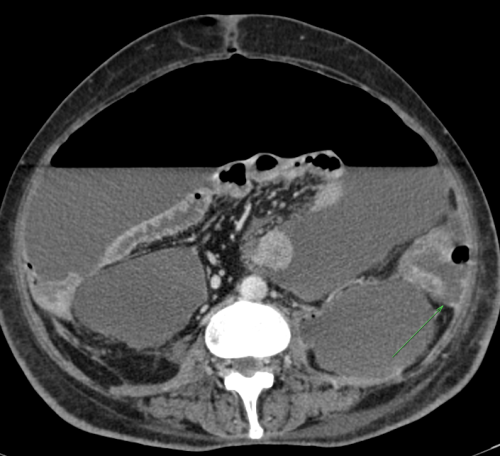 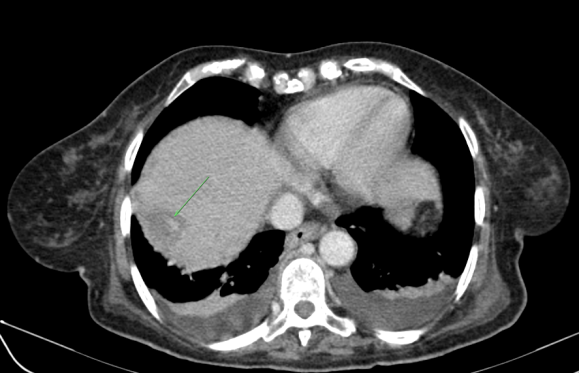 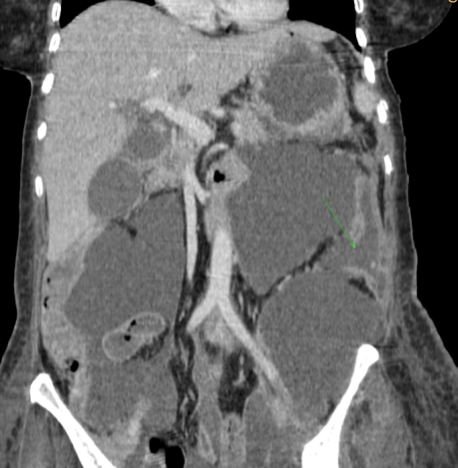