An aberrant origin of the superior mesenteric artery: the coeliomesenteric trunk

Categories
Area of Interest Arteries / Aorta ; Imaging Technique CT-Angiography
Procedure Diagnostic procedure, Computer Applications-3D ; Special Focus Congenital, Arteriosclerosis ;
Show more Show less
Download as PDF Print Show related cases Notify admin
Clinical History
We present a 76-year-old woman with referral for dilatation of the ascending segment of the thoracic aorta assessed with cardiac ultrasound. The patient underwent a CT angiography of the thoracic and abdominal aorta for further evaluation.
Imaging Findings
Computed tomography angiography (CTA) demonstrated dilatation of the ascending thoracic aorta with anteroposterior diameter of 41 mm. Diameters of aortic arch, descending aorta and the abdominal aorta were within normal limits.
The coeliac artery and the superior mesenteric artery arose from the midline of the abdominal aorta from a common "stalk" at the level of the first lumbar vertebra, which had a length of 2.8 cm and a diameter of 0.9 cm. The atypical common vascular trunk gave rise to the quadrifurcation: it first gave off the haller tripod and then the superior mesenteric artery at a lower level. Image reconstruction depicted the vascular tree and the anatomic variation (Fig. 1).
Discussion
The coeliomesenteric trunk (CMT) is an infrequent congenital vascular anomaly of anatomic variation. In this aberrant vascular trunk, the coeliac axis and the superior mesenteric artery originate together from the ventral part of the abdominal aorta. In 1928, Adachi was the first to classify anatomical variations of the coeliac trunk in cadavers. The anatomic variations are clinically quiescent. Yet, they are important to notice and report especially in patients undergoing invasive abdominal procedures [1].
During embryogenesis there are four separate ventral vascular roots that originate from the abdominal aorta and supply blood to the foregut and to the midgut. The hypothesis is that the four vessels interconnect with the vertical Tandler's anastomosis parallel to the aorta. During normal embryological course, the second and third vascular roots regress but they continue to be unified to the existing first root. This leads to the formation of the haller tripod: the left gastric artery (LGA), the common hepatic artery (CHA) and the splenic artery (SA). Theoretically, the vertical anastomosis between the first and the fourth roots normally regresses. As a result the fourth vascular ramification originates solely from the abdominal aorta, creating the superior mesenteric artery (SMA) and this is considered to be the normal anatomical architecture. If, however, the bringing anastomosis persists, then a quadrifurcation may form [2].
Multidetector CTA enables the rapid acquisition of thin-slice, high-resolution images of the abdominal arteries. Multiplanar image reformatting delineates the origin and the course of the vessels, facilitating the diagnosis of mesenteric vascular anomalies. The radiologists may be the first to encounter the vascular malformation from the CT data and should include the diagnosis in the report [3] (Fig. 2).
Differential Diagnosis List
Coeliomesenteric trunk
Congenital absence of SMA
SMA occlusion
Final Diagnosis
Coeliomesenteric trunk
References 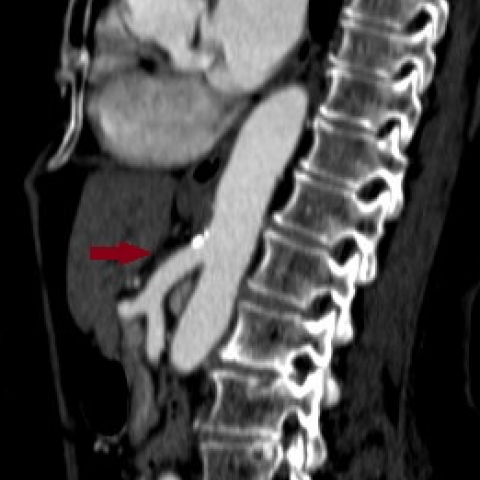 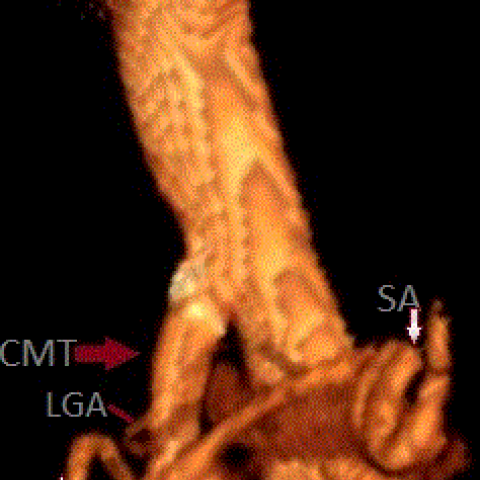 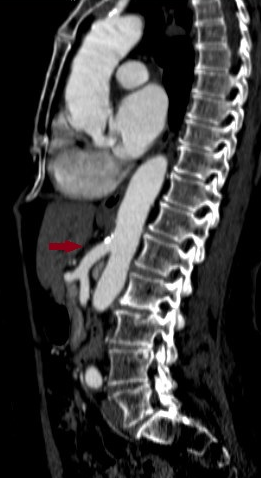 The common origin of the coeliac axis and the SMA is demonstrated
University Hospital of Ioannina, Ioannina, Greece 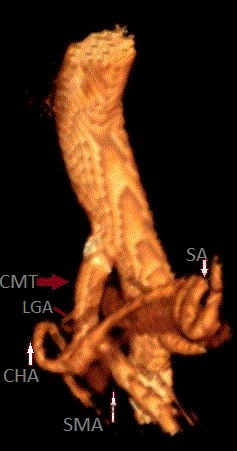