Categories
Area of Interest Neuroradiology brain ; Imaging Technique CT
Procedure Computer Applications-Detection, diagnosis ; Special Focus Ischaemia / Infarction ;
Show more Show less
Download as PDF Print Show related cases Notify admin
Clinical History
An 89-year-old male patient presented to the emergency department following a collapse. On arrival in ED the patient was confused, had slurred speech, a left facial droop, left-sided sensory neglect and left-sided hemisensory loss. This was on a background of known atrial fibrillation.
Imaging Findings
A CT head non-contrast was performed which highlighted a right distal middle cerebral artery infarct. The thrombus in the distal right MCA (M3) was visible on CT. The cytotoxic oedema was clearly seen, involving the cortex of the right parietal lobe. Follow-up CT head non-contrast ten days post infarct demonstrated pseudo-normalisation of the cortex in the area of the right parietal lobe infarct. The oedema could now be mistaken for vasogenic oedema with the appearance that the cortex has been spared.
Discussion
The "fogging phenomenon" in which initially hypodense ischaemic areas transiently become isodense to normal brain, is seen in the second and third weeks following an ischaemic infarct [1]. It is believed to be due to influx of lipid-laden macrophages, proliferation of capillaries, and decrease in bulk water in the area of infarct [2]. The cortex regains density and can lead to confusion on repeat imaging at this time, as the cortex appears to be spared compared to initial imaging. It can be present in 54% of cases if imaged during this time period post infarct. The hypodense areas reappear in all cases by five months post infarct [2]. If confusion exists, the injection of IV contrast will demarcate the region of infarction [3].
O'Brien et al have examined the presence of “fogging” on T2 weighted MRI post ischaemic infarct. Results showed that reduction in infarct extent on T2-weighted MR, which may be attributed to “fogging”, occurs in a significant proportion of patients with cortical infarcts. They concluded that this may lead to an underestimation of true final infarct extent and that true infarct extent on T2-weighted MR can probably only be assessed on scans obtained beyond 7 weeks after stroke [4].
In this case the initial CT shows clear cytotoxic oedema, for which infarct is the main differential diagnosis. The presence of a thrombus in the M3 segment of the right MCA confirms this. The repeat CT appears, on initial viewing, to be more consistent with vasogenic oedema, with sparing of the edges of the parietal cortex. Vasogenic oedema is more commonly associated with a cerebral neoplasm or cerebral abscesses. On closer inspection, the cortex involved is not normal. It is hazy and swollen, and this would not be present in true vasogenic oedema. It does not represent a true case of "fogging" either, as some sub-cortical oedema remains. This case highlights the potential pitfall of misdiagnosing vasogenic oedema in a patient with cytotoxic oedema and a cortical infarct. A patient whose initial presentation, or CT scan, is delayed is at an increased risk of this occurring. This could then lead referring teams down an incorrect diagnostic and treatment pathway. A good clinical history and careful comparison with any previous imaging is required to avoid such a pitfall. A contrast scan can be considered if the diagnosis remains unclear.
Differential Diagnosis List
Right parietal lobe infarct
Vasogenic oedema
Cerebral neoplasm or abscess
Final Diagnosis
Right parietal lobe infarct
References 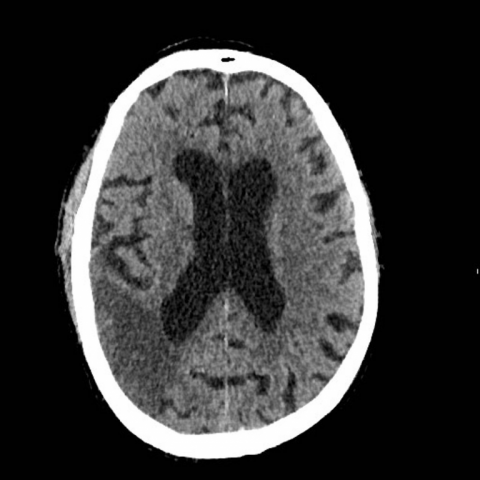 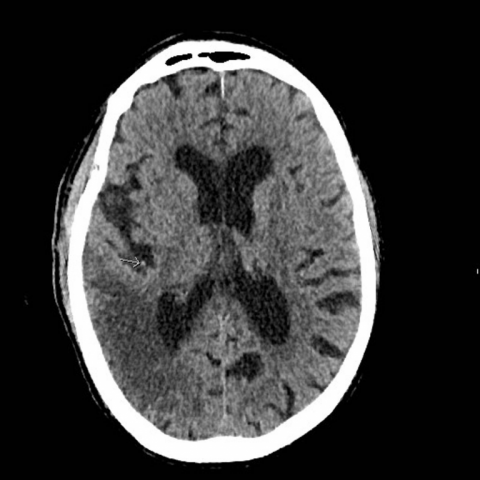 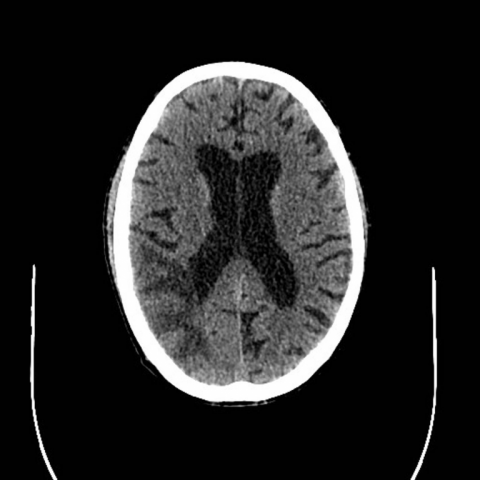 Follow-up axial CT head demonstrating the "fogging" effect in the right parietal lobe. The appearances of the infarcted area could be mistaken for vasogenic oedema sparing the cortex in the parietal lobe. 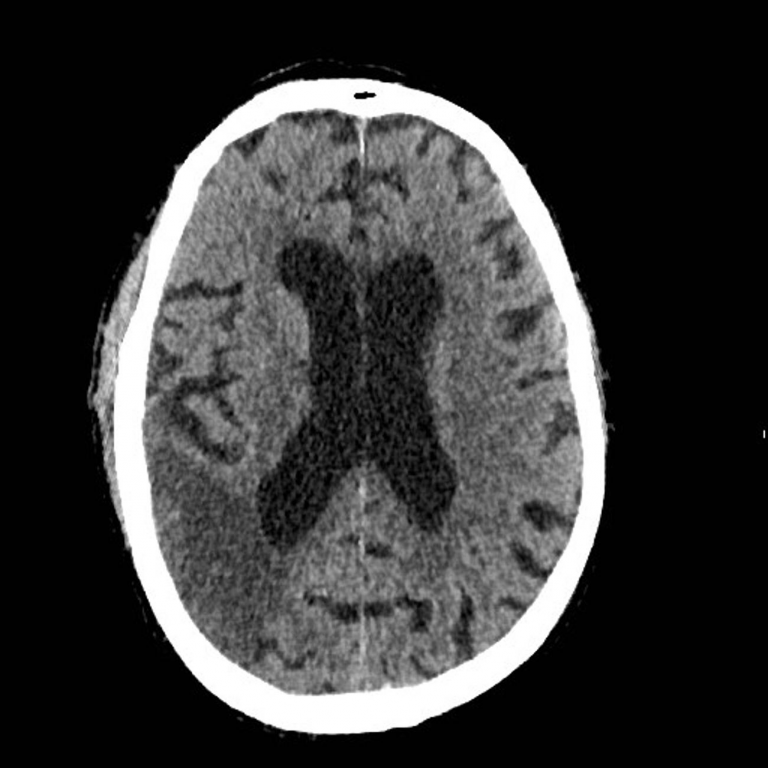 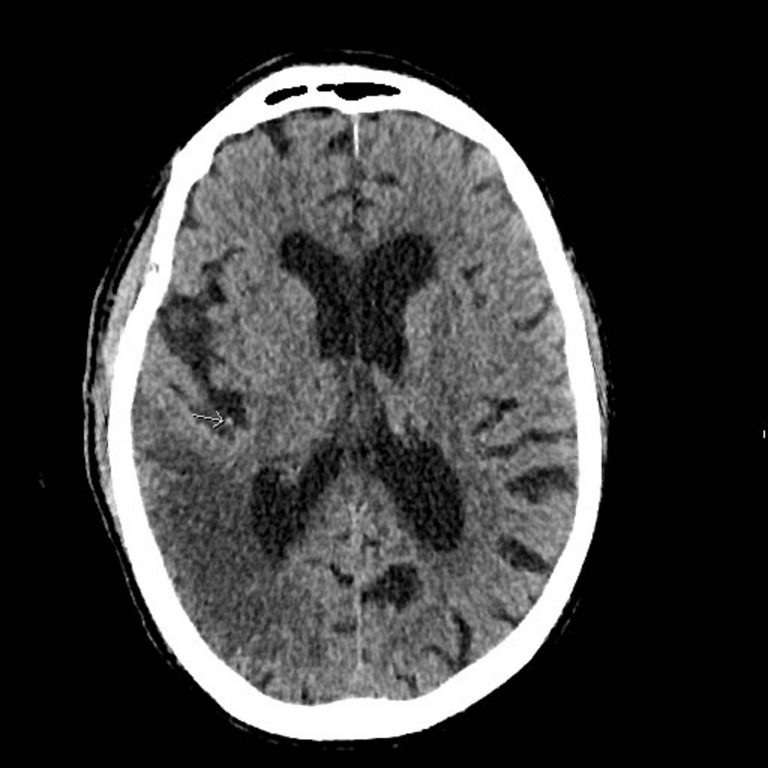 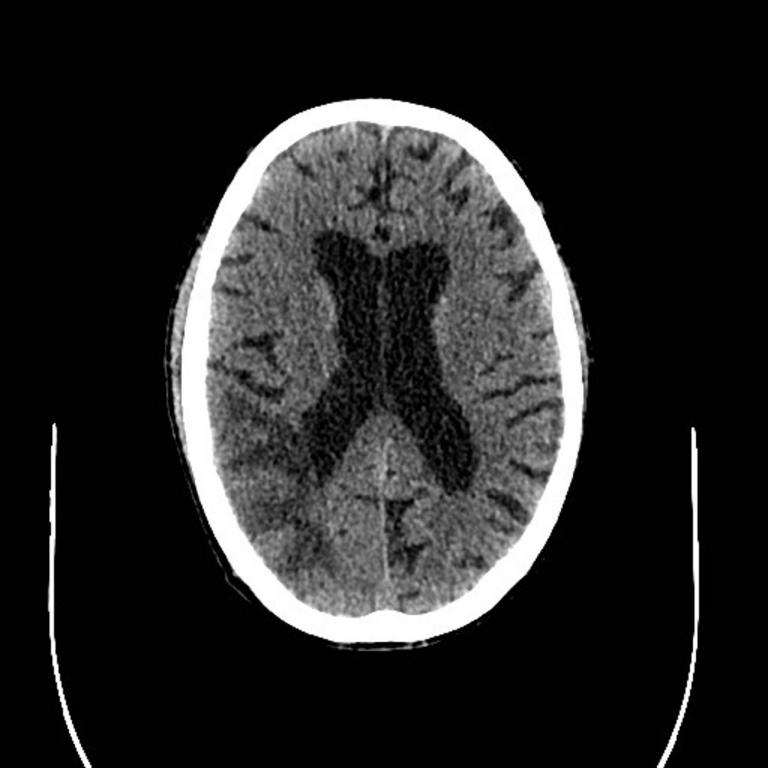 Follow-up axial CT head demonstrating the "fogging" effect in the right parietal lobe. The appearances of the infarcted area could be mistaken for vasogenic oedema sparing the cortex in the parietal lobe.
Department of Radiology, Royal Perth Hospital, Perth, WA, Australia