Categories
Area of Interest Head and neck ; Imaging Technique CT, CT-Angiography, MR
Procedure Diagnostic procedure, Contrast agent-intravenous, Imaging sequences, Comparative studies ; Special Focus Haemorrhage, Embolism / Thrombosis, Obstruction / Occlusion, Blood ;
Show more Show less
Download as PDF Print Show related cases Notify admin
Clinical History
An 85-year-old Caucasian male patient came to the emergency department for severe occipital headache with progressive weakness in the left limbs. No trauma or cervical manipulation or treatment with anticoagulants was referred. The patient had a coronary disease in treatment with anti-platelets.
Imaging Findings
At first time, a non-enhanced cranial CT was requested. It was normal, without acute haemorrhage or early ischaemic signs (Fig. 1). After that, the patient was admitted to Neurology.
The next morning, the stroke code was activated because the patient developed spastic tetraparesis. Cerebral CT-perfusion did not reveal significant alteration of brain volume or cerebral flow. Enhanced CT angiography was also normal, with the basilar and cerebellar arteries being permeable. (Fig. 2)
So as the stroke code was normal, a cervical MRI was requested immediately. On the T2-WI echo-gradient sequence a hypointense collection was identified (Fig. 3a). This collection was located within the thecal sac and it did not present enhancement (Fig. 3b and 3c).
Retrospectively, the key to diagnosis would have been to carefully observe the spinal canal on CT angiography. A hyperdense collection was present. (Fig. 4)
Discussion
Acute spinal subdural haematoma (SSH) is a very rare entity. It is less common than epidural haematoma which has an incidence of 1:1000000. [1] Most of them are spontaneous. The cause for spontaneous subdural haematoma is unknown, although it has been related with treatment with anticoagulants or anti-platelets, tumours or arteriovenous malformations. [2]
SSH are slightly more common in men, without age predilection, and they are more often located in the thoracic or thoracolumbar region than lumbar region alone and preferably on dorsal subdural space. [2]
Symptoms associate radiculopathy or acute myelopathy with progressive sensorial and motor deficit. [3] Symptoms depend on affected level and volume of bleeding. Cervical spinal subdural haematomas have worse prognosis because spinal cord compression is easier. [4]

In relation to the above, the patient of our case presented subdural spinal haematoma in an uncommon location (cervical spine), which caused initially severe occipital headache without clear symptoms of myelopathy or radiculopathy. This clinical manifestation extended the possible differential diagnoses: intracranial and vertebro-basilar pathology. Probably if the patient had presented tetraparesis when he came to the emergency room, MRI would have been requested in that moment.

CT can initially identify an acute haematoma in the spinal canal with high probability as a hyperdense collection. [5] Therefore, if the haematoma in the CT had been identified, neurosurgeons would have given treatment without waiting for MRI.
However, MRI is the gold standard. It confirms or disproves neurological compression. [4] The key is to identify the collection within the thecal sac in close contact with the spinal cord without compression of epidural fat. The latter allows to distinguish this entity from epidural acute haematoma. The collection commonly has no enhancement and its appearance depends on the stage of bleed. [6] According to the presented case, acute bleeding (1-3 days ago) usually is hypointense on both T1-WI and T2-WI. In case of hyperacute bleeding (first 24 hours), haematomas are isointense on T1-WI and hyperintenses on T2-WI. Subacute haematomas present hyperintensity on T2-WI and characteristically hyperintensity on T1-WI too, due to methehaemoglobin. Eventually, chronic haematomas are hypointense on both T1-WI and T2-WI.
Angiography is helpful in order to exclude arteriovenous malformation. 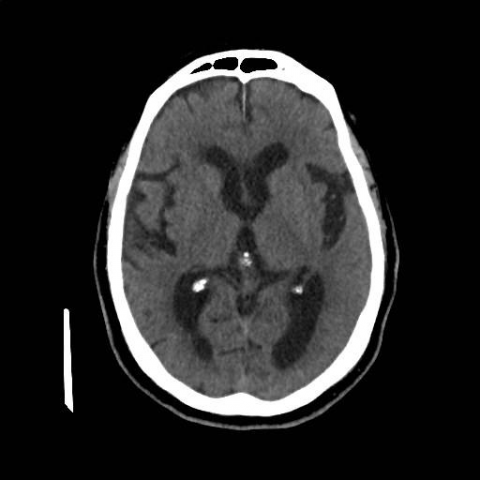 Cranial non-enhanced CT is normal for this age, without acute haemorrhage or early ischaemic signs.
Figure 2 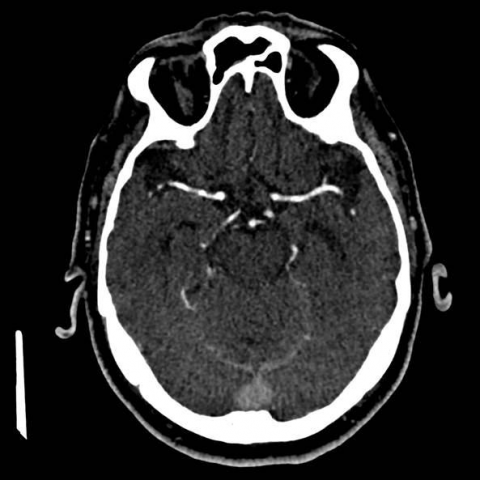 Stroke code protocol: Brain and neck CT-angiography. It is normal for this age too. No occlusion, no dissection, no significative stenosis.
Figure 3 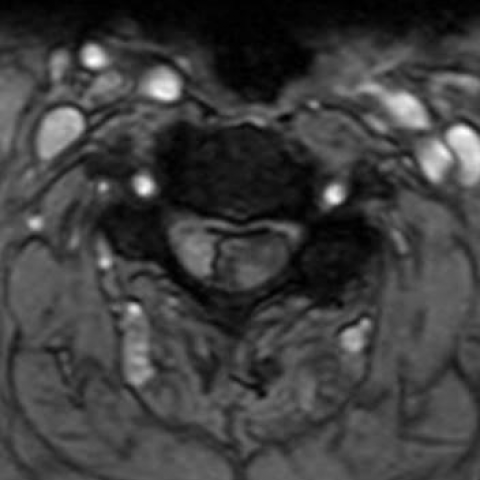 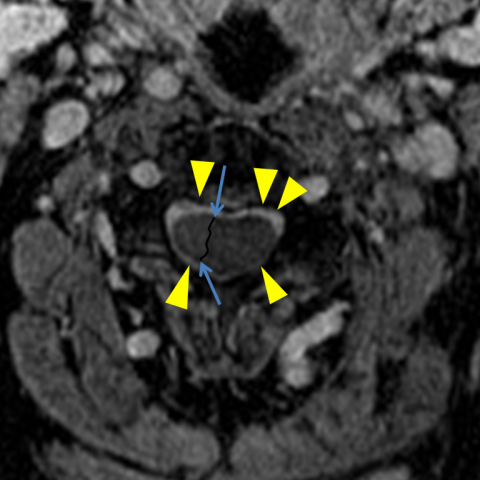 Axial T1-WI+Gd FAT SAT: Collection appears hypointense and has no enhancement. It is located within thecal sac (black thin line, blue arrows). Epidural enhanced fat is not compressed at this level (yellow arrowheads). 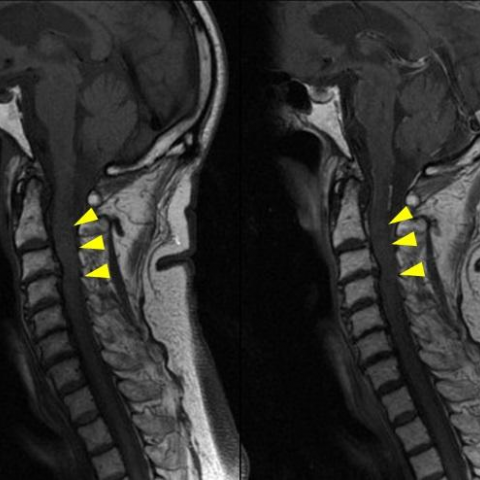 Sagittal T1-WI non enhanced (left) and sagittal T1-WI+Gd (right): Isodense collection at the spinal cord is hardly identified at C2-C4 level (yellow arrowheads). It does not present any enhancement. 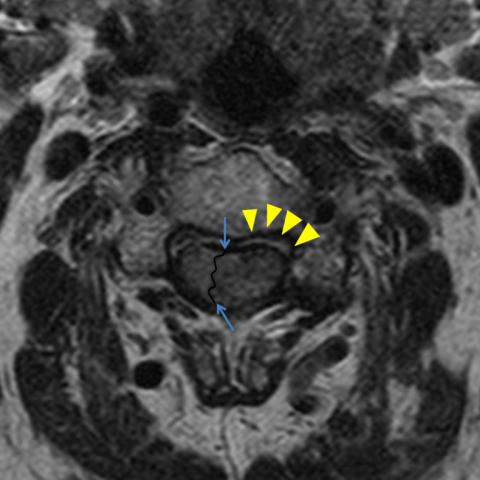 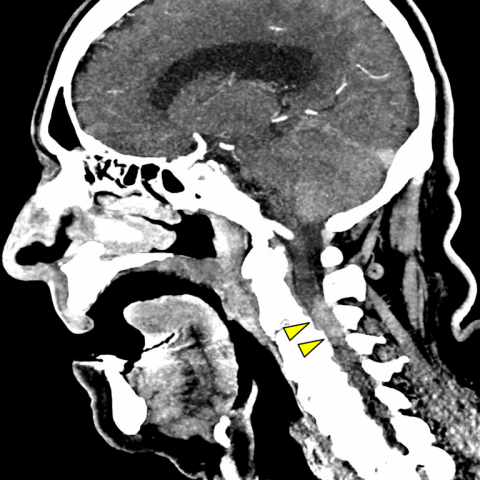 Stroke code protocol: Brain and neck CT-angiography, sagittal plane. Reviewing the images, a hyperdense collection into spinal canal was detected which had not been identified initially (yellow arrowheads). 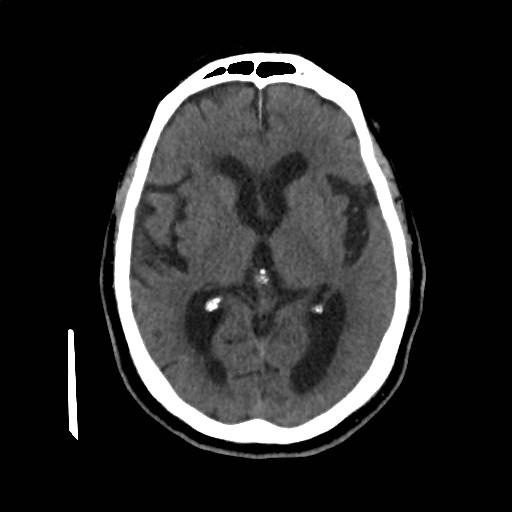 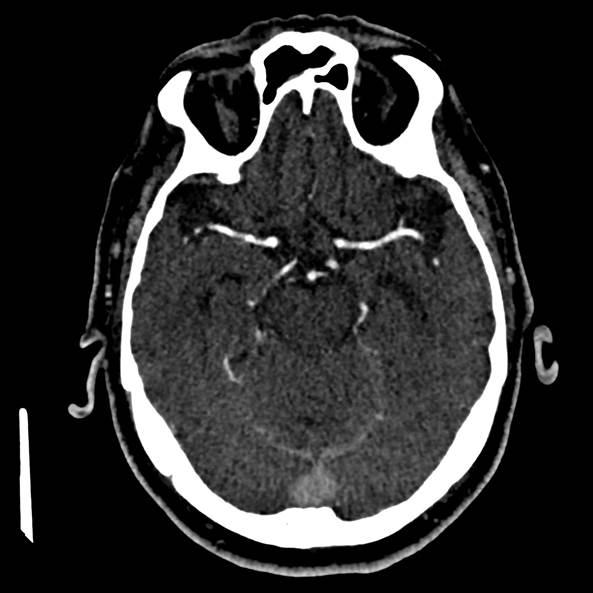 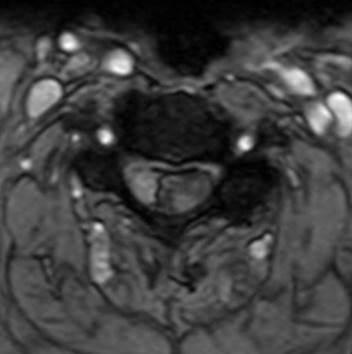 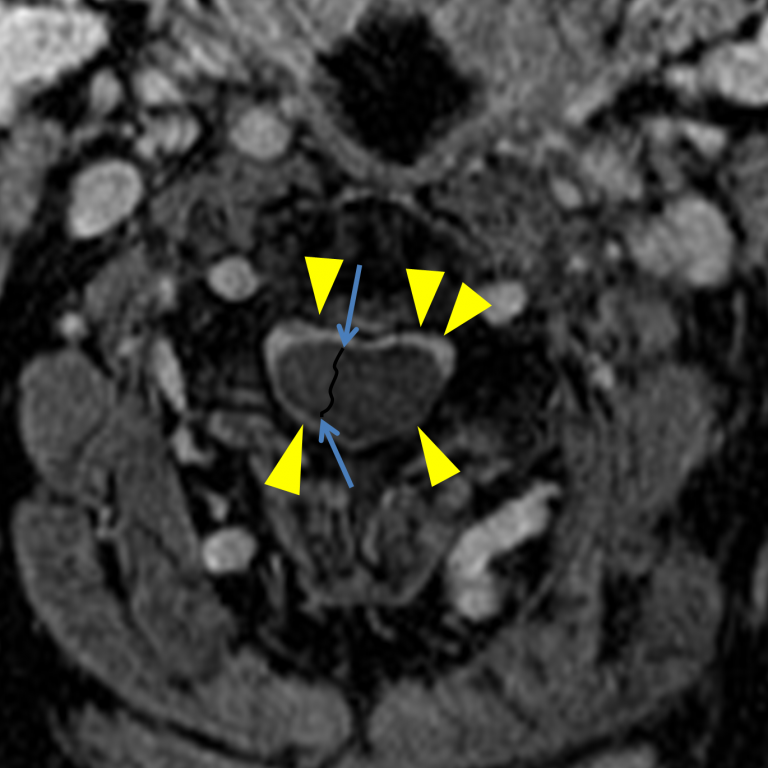 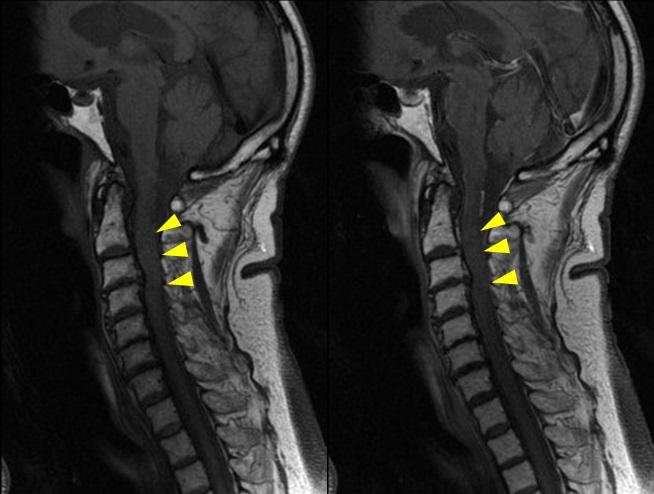 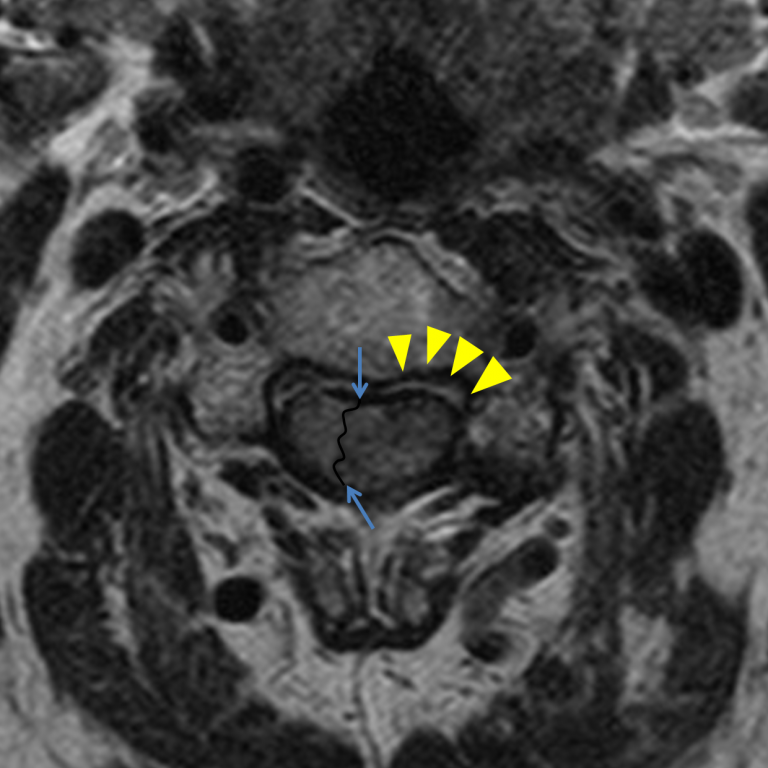 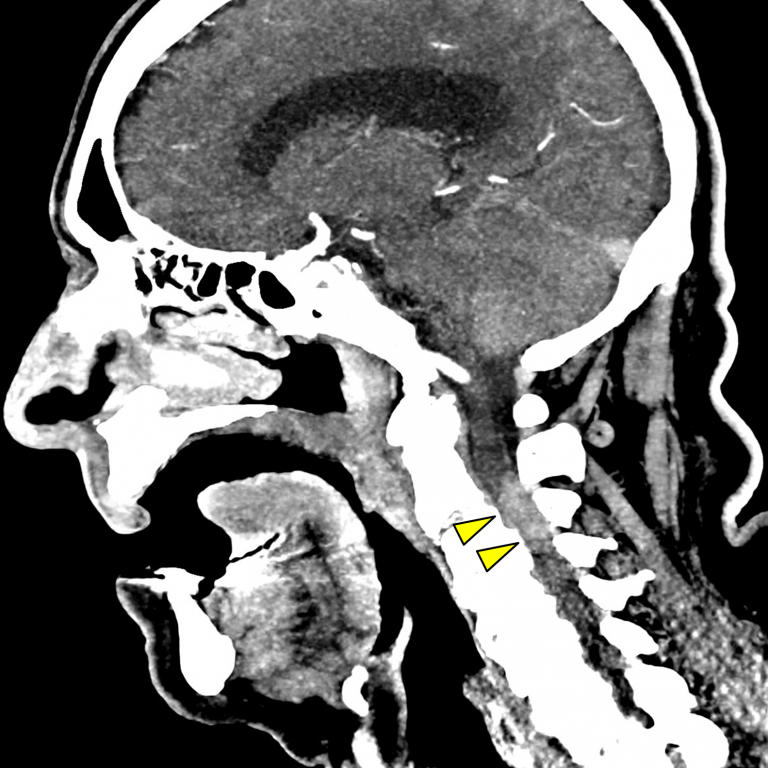