Categories
No Area of Interest ; Imaging Technique Ultrasound, Ultrasound-Colour Doppler, MR ;
No Procedure ; No Special Focus ;
Show more Show less
View full case Show related cases Notify admin
Clinical History
The US and MR imaging findings of lymph node enlargement at the antecubital fossa, due to cat scratch disease.
Differential Diagnosis List
Log in to take the quiz and to see the final diagnosis
Lymph node involvement in cat scratch disease
Imaging Findings
The patient presented with a gradually increasing mass lesion in her right antecubital fossa. She had no fever and no additional symptoms other than the mass lesion in her right arm.

She was first evaluated by ultrasound (US). On US, a hypoechoic mass lesion, approximately 25mm in size, was seen on her right antecubital fossa (Fig. 1a). The lesion was homogeneous. On colour Doppler imaging, arterial and venous vessels were detected entering the lesion through a hilus and extending to the periphery of the lesion (Fig. 2a). These findings suggested a lymph node.

The patient denied a history of scratching by a cat or trauma. But, on careful physical examination, there was a bite on her skin near the soft tissue swelling. On examination of the right axillary region, we detected three other lesions with a similar echo pattern and colour signals. On spin-echo T1-weighted magnetic resonance (MR) imaging, we detected the lesion as hypointense (Fig. 3a). The lesion showed hyperintense signal on T2-weighted MR imaging (Fig. 3b). Contrast enhanced T1-weighted MR imaging revealed marked contrast enhancement in the lesion (Fig. 3c). We detected perilesional lymphangitis on both T1 and T2-weighted MR images.

Discussion
Cat scratch disease is usually seen as a self-limited febrile illness characterised by cutaneous papules at the site of a cat scratch accompanied by regional lympadenitis. More than half of the patients that are infected are children or adolescents. It is caused by the inoculation of Bartonella henselae by the scratch or bite of an immature cat. In the past diagnosis was made if three of the following four criteria met: (1) history of cat exposure with inoculation, (2) positive skin test, (3) absent laboratory and histopathological evidence of other disease, and (4) biopsy results of granulomatous infection. Today a specific serologic test can confirm the diagnosis.

When cat scratch disease is limited to a single lymph node at the inoculation site, such as the antecubital fossa, it may be difficult to differentiate it from other soft tissue lesions on the basis of radiological findings, especially magnetic resonance imaging findings.

The involved lymph nodes typically range in size from 1cm to 5cm. They can be seen as round or ovoid masses. The involved lymph node can be seen as hypoechoic, although this feature is not helpful in differential diagnosis. The demonstration of an artery penetrating the hilum of the mass suggests a lymphatic origin of the lesion. On MR imaging, the involved lymph nodes display low signal intensity on T1-weighted imaging and increased signal intensity on T2-weighted imaging, like other soft tissue tumours. Marked and uniform contrast enhancement after contrast medium injection should raise the suspicion of a lymph node origin. Perilesional lymphangitis is the an other findings that is commonly seen in this disease. 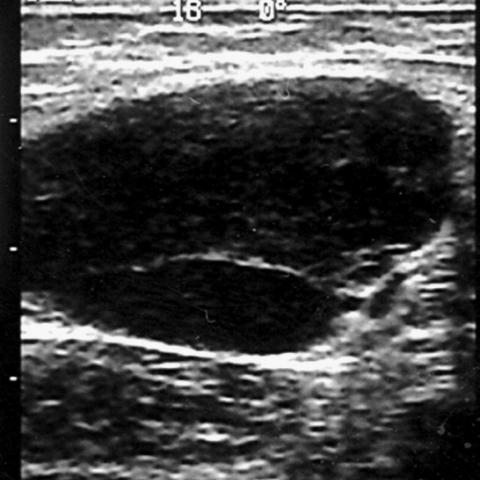 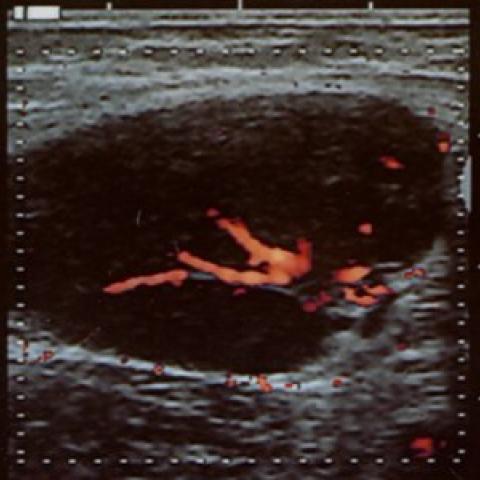 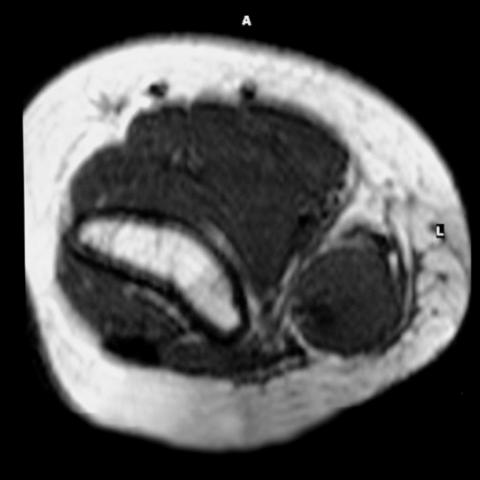 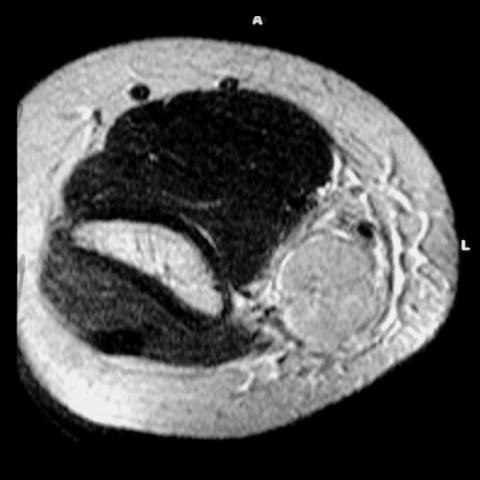 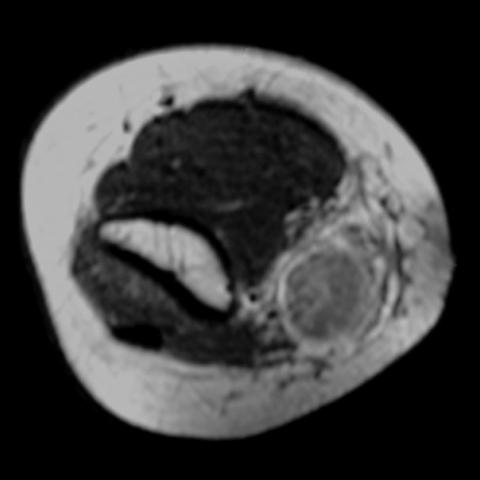 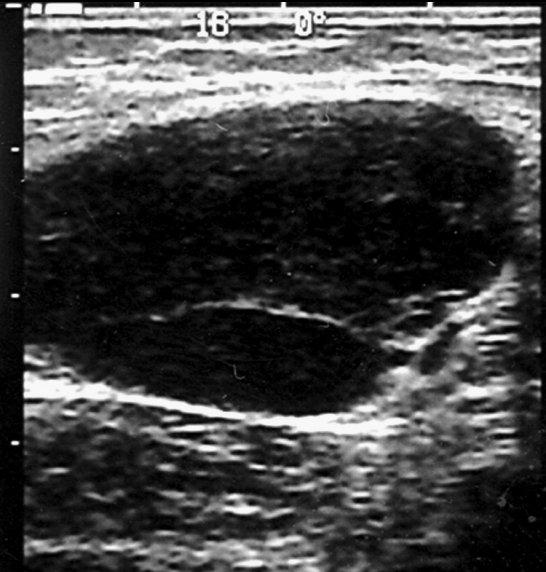 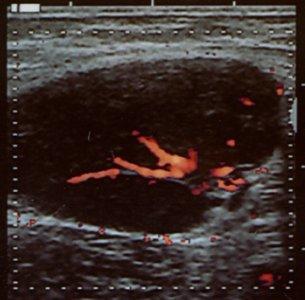 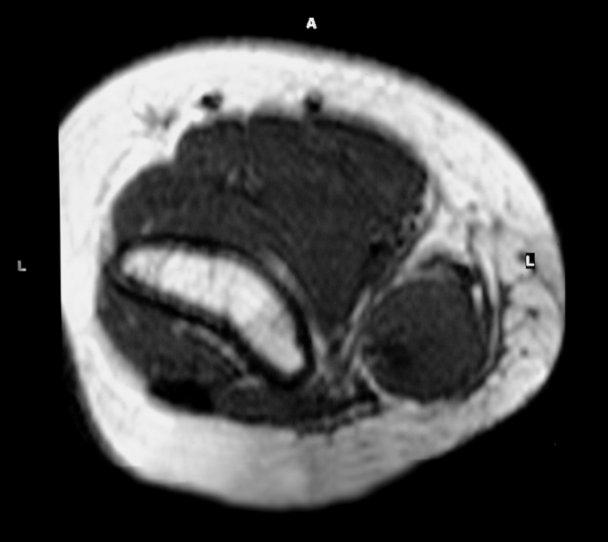 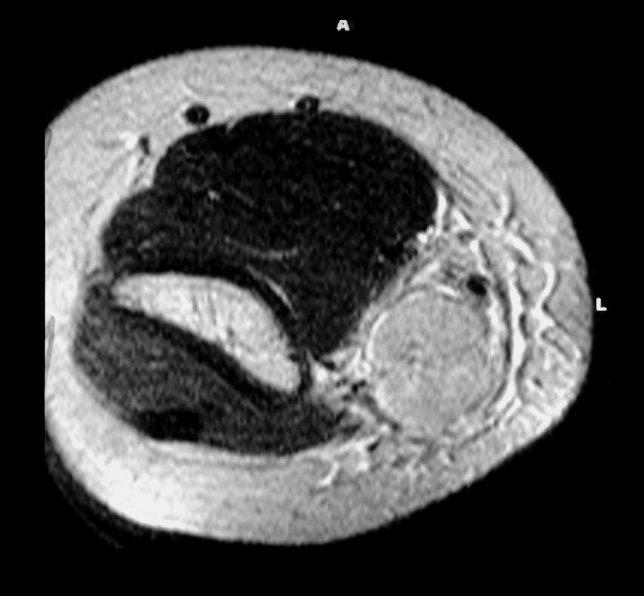 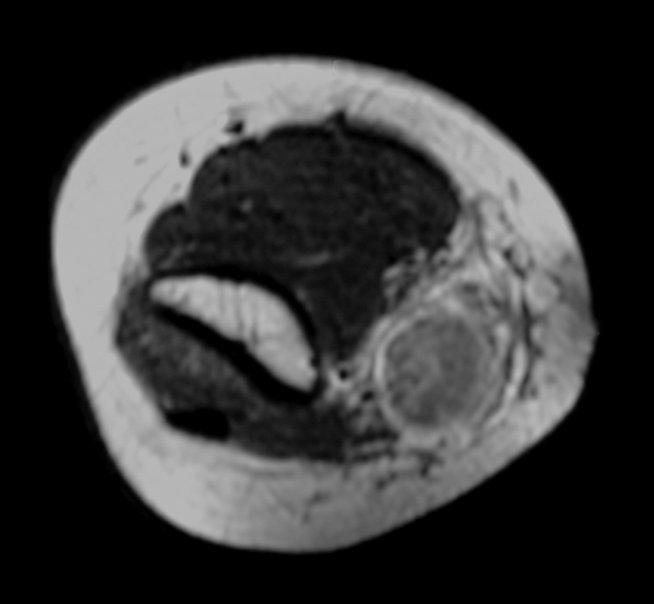