Categories
Area of Interest Abdomen ; Imaging Technique CT, Percutaneous
Procedure Imaging sequences, Surgery ; Special Focus Acute ;
Show more Show less
Download as PDF Print Show related cases Notify admin
Clinical History
23-year-old male presented to ER with severe on and off suprapubic abdominal pain associated with nausea and non-bilious vomiting.
The patient had a normal bowel movements with no urinary complaints.
No past surgical history.
The patient was referred for contrast-enhanced CT abdomen and pelvis.
Imaging Findings
CT abdomen/pelvis with IV contrast was performed and the caecum was seen down in the pelvis. In the left lower quadrant of the abdomen, near to the midline a large rounded fluid collection with air and fluid level and faecal matter within it was seen. Minimal surrounding fat stranding was detected. No ascites. No free air.
Appendix was not clearly visualized.
No small or large bowel dilatation.
No significant lymphadenopathy could be appreciated.
Impression:
Contrast-enhanced CT features were highly suggestive of inflamed mucocele of the appendix versus ruptured appendix with contained abscess formation, also possibility of inflamed Meckel diverticulum was considered.

Diagnostic laparoscopy was done and excision of strangulated Meckel Diverticulitis was performed.

Meckel diverticulitis has a similar pathogenesis as acute appendicitis; it may be caused by bacterial infection and complicated in some cases to gangrene. [3]

2% of Meckel diverticulum cases have gastric mucosa which can be picked up by pertechnitate nuclear study; however, in acute cases this study usually is not done. [3]
On CT Meckel diverticulitis presented as tubular or rounded collection with air-fluid level in abdomen or pelvis communicating with small intestine surrounded by mesenteric inflammatory changes. Enterolith has been reported in rare cases. [4]
Most of the patients who presented with Meckel diverticulitis are suspected to have acute appendicitis clinically which can be differentiated radiologically by visualizing the normal appendix.
Most of the reported cases were located near the midline and not in the right lower quadrant. Ventricular attachment to the umbilicus may be present which may mimic infected urachal duct cyst; however, urachal duct cyst is always related to the dome of the urinary bladder. [5]
Conclusion:
In adult or paediatric patients presenting with acute lower abdominal pain, Meckel diverticulitis should be considered as part of the differential diagnosis. If fatty strands are noted on CT in the lower abdomen, particularly in mid-abdomen with normal appendix, the likelihood of Meckel diverticulitis increases. CT with oral contrast will help in identifying the diverticulum.
Differential Diagnosis List
Meckel diverticulitis
Infected urachal duct cyst
Ruptured appendix with contained abscess formation
Inflamed mucocele of the appendix
Final Diagnosis
Meckel diverticulitis
References 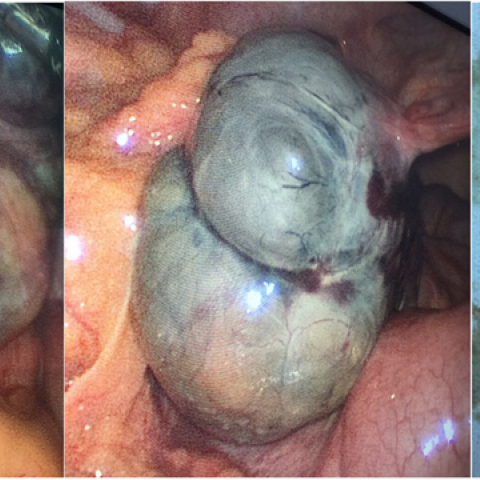 Diagnostic laparoscopy was done and excision of strangulated Meckel's diverticulitis was performed.
Figure 2 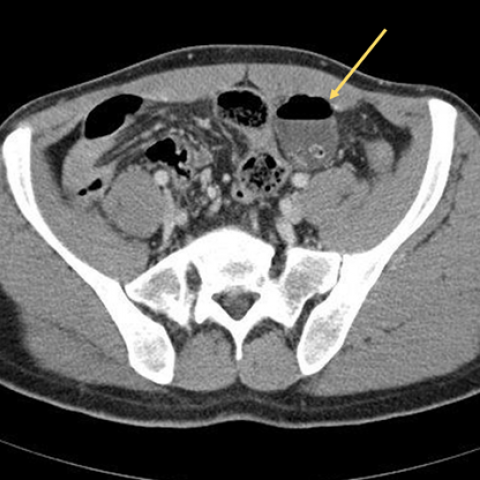 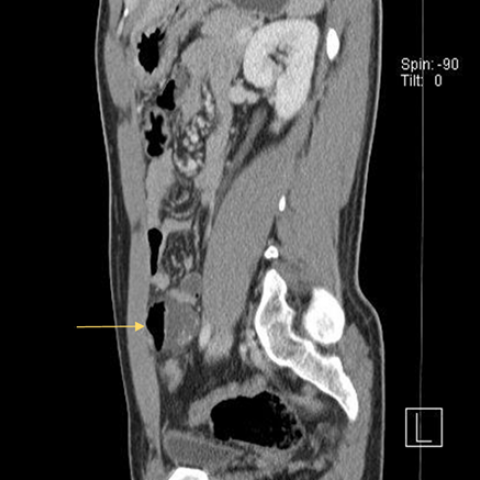 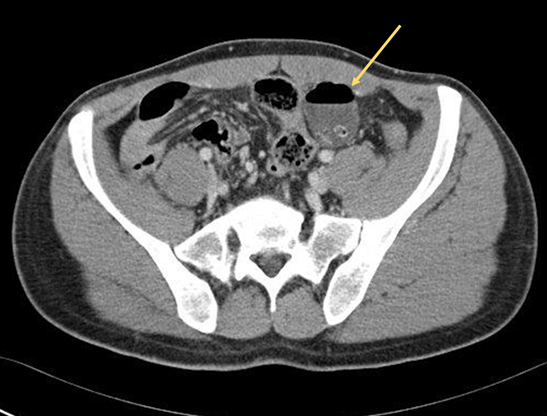 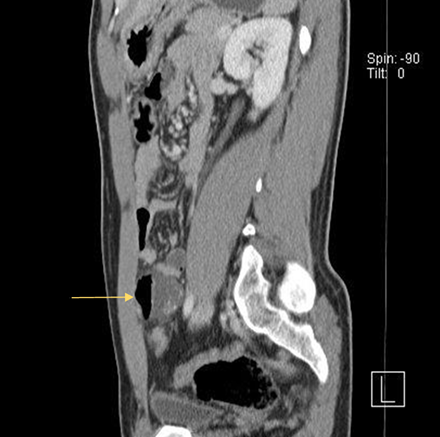