Categories
Area of Interest Arteries / Aorta, Vascular ; Imaging Technique CT-Angiography, Catheter arteriography, MR
Procedure Diagnostic procedure ; Special Focus Congenital ;
Show more Show less
Download as PDF Print Show related cases Notify admin
Clinical History
14-year-old female with congenital swelling of the right upper limb, progressive over time, was operated twice in other institutions with no previous available records.
Imaging Findings
CT Angiography revealed extensive vascular malformation of the right upper limb with a dilated serpentine network of arteries and veins, multiple sites of anomalous communication, the largest at the level of the brachial artery and vein, with manifest dilated subclavian artery and vein. There was also involvement of the intraosseous vessels, with hugely prominent nutrient artery grooves at the metaphysis of multiple bones with extensive vascularization of the whole medullary spaces being filled by aneurysmally prominent arteries enhancing in similar pattern to the extraosseous vessels with subsequent bone deformity and cortical erosions. Conventional angiography showed similar findings with blush enhancement of the medullary spaces. Additional MRI revealed vascularization of medullary spaces with signal void changes and significant dilated left and right heart ventricles with high cardiac output of 12 liter per minute in this child, weighing 45 kg, reflecting risk of heart failure.
Discussion
Vascular malformations of the limbs are rare congenital anomalies with only 20% of these cases reported to have associated osseous involvement [1]. According to the international society for the study of vascular anomalies (ISSVA), vascular anomalies are divided into vascular tumours and vascular malformations (VM). Vascular tumours are further subdivided into benign, borderline and malignant tumours, while VM are further classified into 5 types: the 1st is the simple type (one type of malformation in the lesion as capillary or venous or lymphatic or arterial), AVM and AVF are also included in this group, the 2nd type of VM is the combined type (two or more malformations in the same lesion as CVM, CAVM, CLAVM), the 3rd type of VM are malformations of major named vessels, also called truncal malformations, and these are further classified according to the type of the involved vessels (lymphatics, veins, arteries ) or classified according to the nature of the defect as abnormalities of origin, course, length, diameter, related valves etc. The 4th type of (VM) includes those malformations associated with other anomalies such as VM with limb growth anomalies (Parkes Weber syndrome, Klippel Trenaunay syndrome ), VM with lipomatous hypertrophy (CLOVES syndrome, Bannayan RileyRuvalcaba sd ), VM with brain anomalies (Macrocephaly, Microcephaly, Sturge-Weber syndrome) and VM with osseous lesions (Maffucci syndrome). The 5th group includes the provisionally unclassified lesions similar to verrucous hemangioma, angiokeratoma, and angiomatosis of soft tissues [2, 3].

Our case, in spite of the extensive appearance, could possibly present a case of simple high flow AVF. This consideration is basically due to the extensive shunting related changes. The osseous involvement appears to be secondary to the VM rather than being a primary element of the malformation. It may also present a combined high flow VM such as CAVM, which may require histopathological correlation. In our case there were no observed limb growth anomalies or lipomatous hypertrophy which are seen in the 4th type of VM. There were also no associated skin lesions or adipose tissue proliferation which are found in unclassified conditions as angiokeratosis and angiomatosis of the soft tissues [4]. 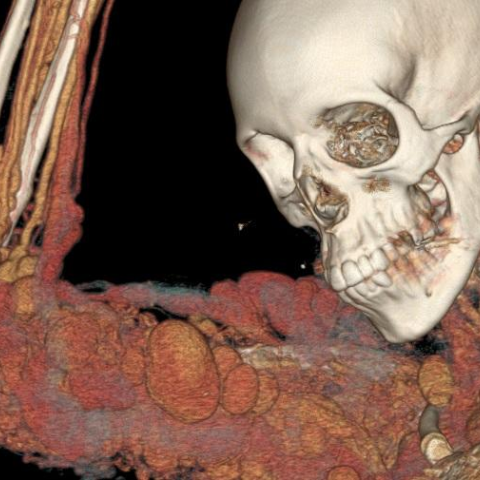 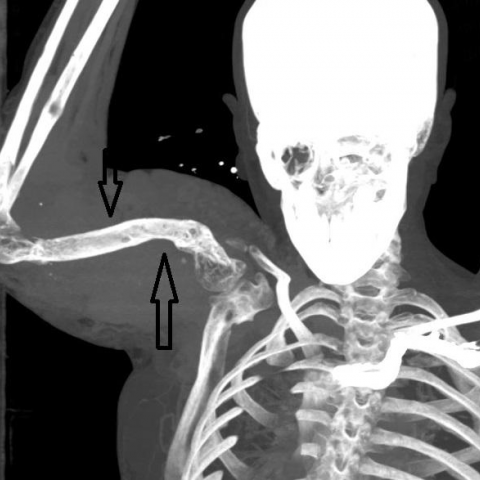 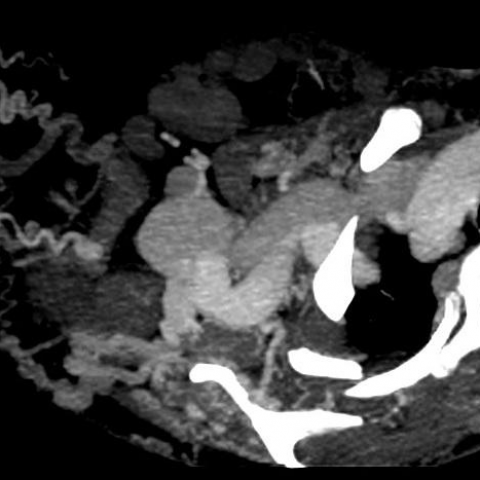 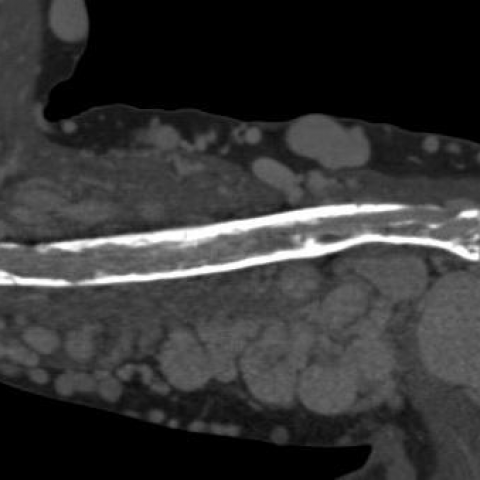 MIP CT with extensive hypertrophy of the nutrient arteries grooves at the metaphysis with further transformation of the whole medullary cavity of humerus to an enhancing large vascular space . 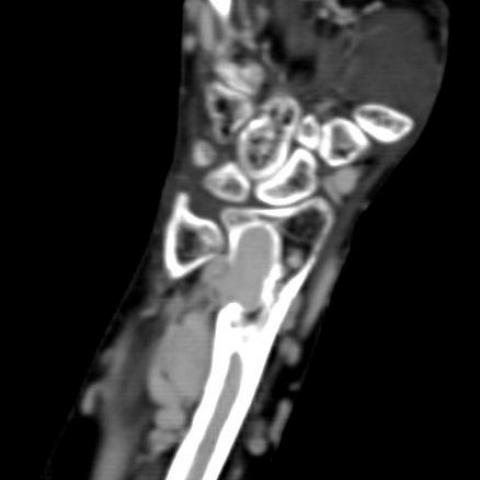 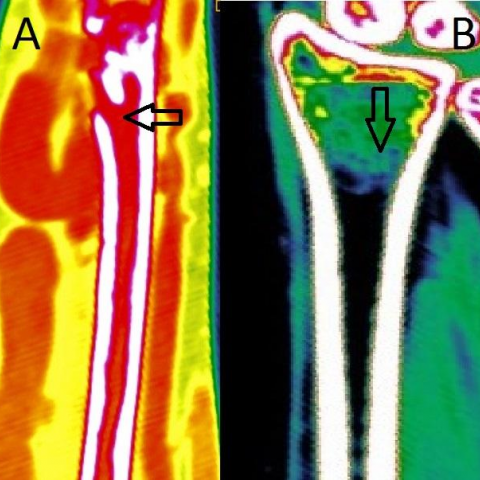 Colour coded arterial phase MPR comparing between the abnormal right Radius (A) and normal left side (B). The abnormal side demonstrates extensive vascularization of the medullary space (Arrow in A)
Figure 2 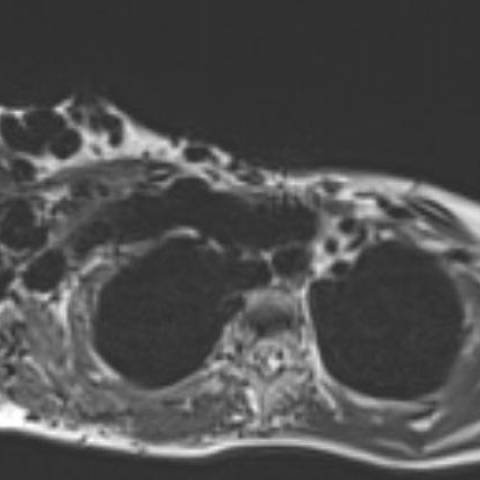 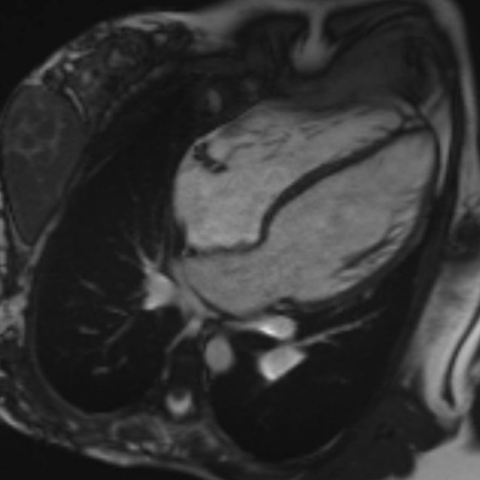 Cardiac MRI with dilated both right and left ventricles 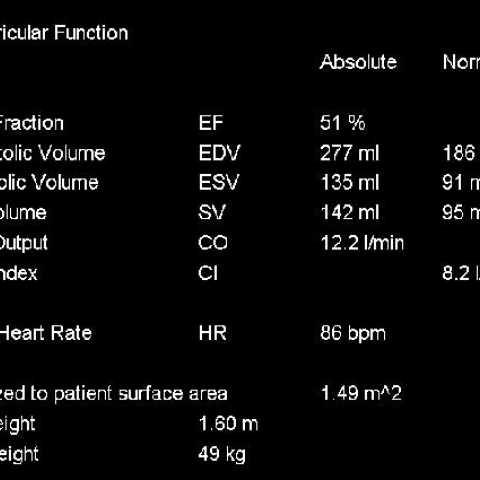 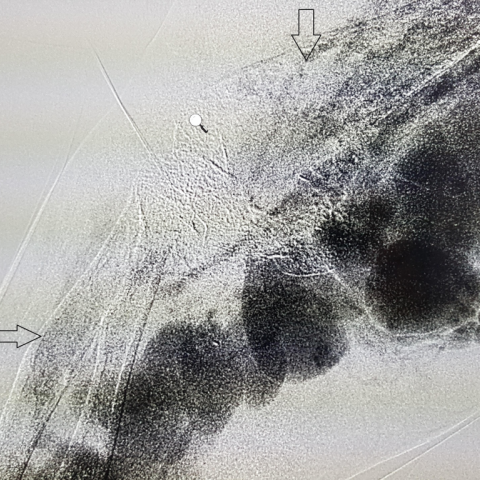 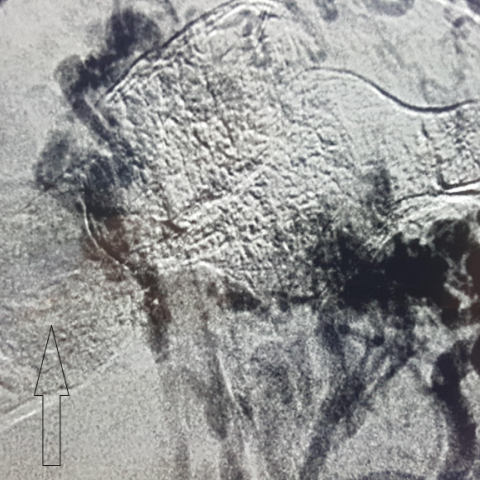 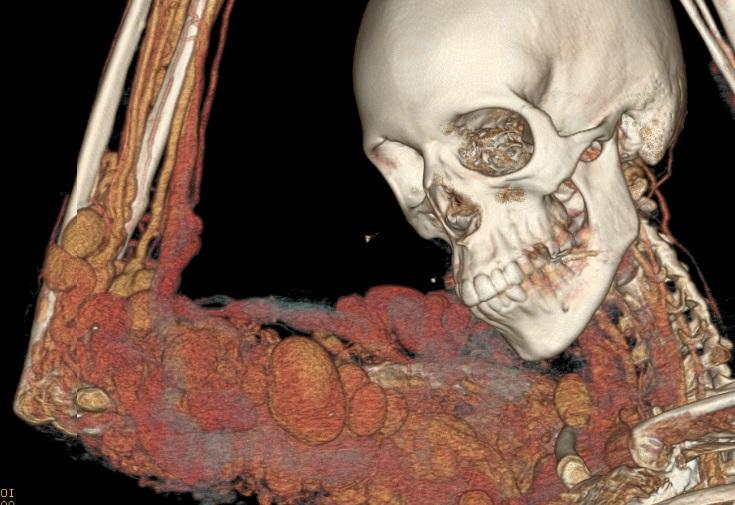 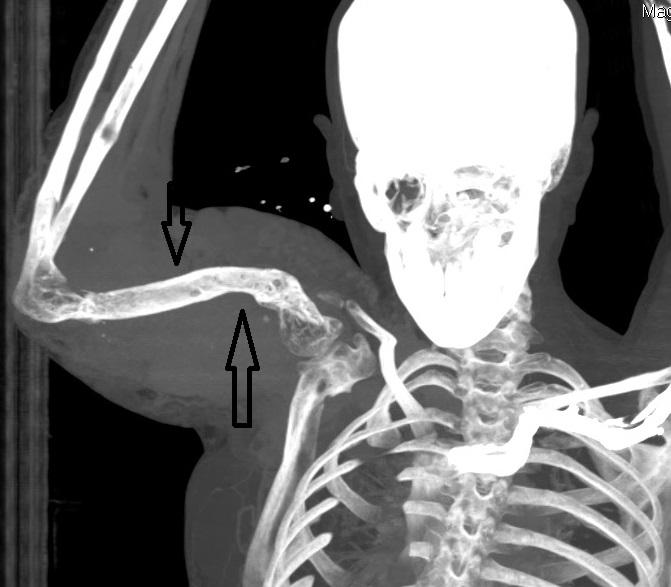 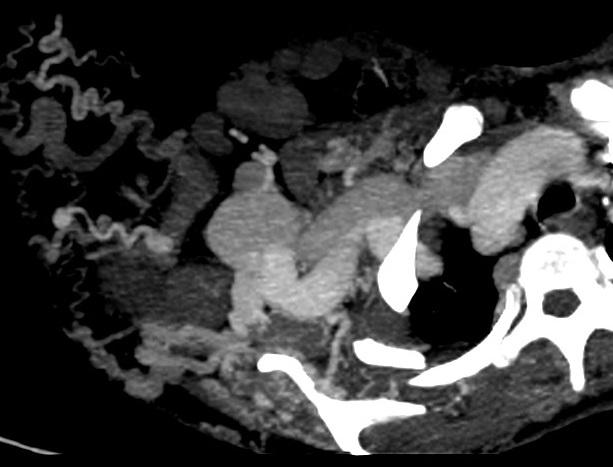 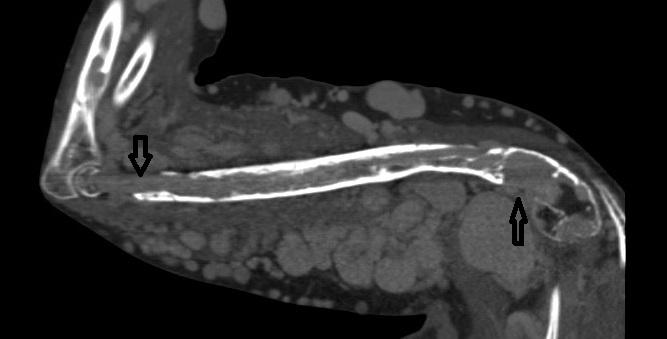 MIP CT with extensive hypertrophy of the nutrient arteries grooves at the metaphysis with further transformation of the whole medullary cavity of humerus to an enhancing large vascular space .
Radiology Department // Mediclinic Airport 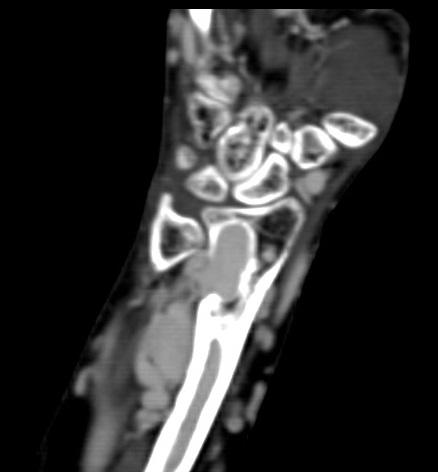 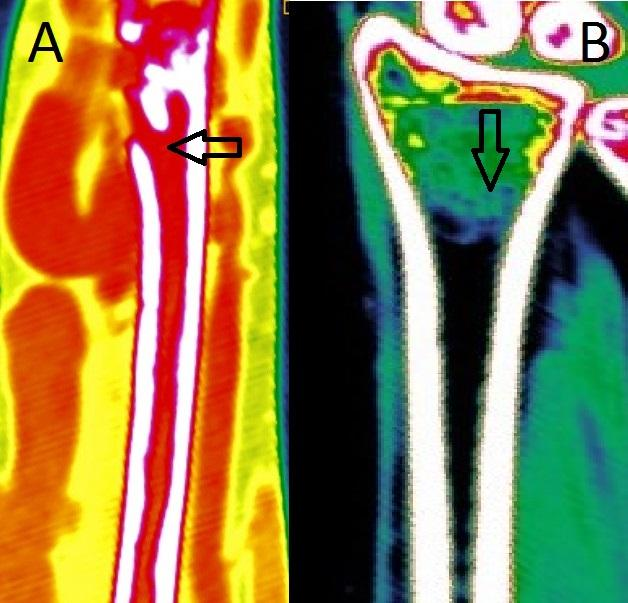 Colour coded arterial phase MPR comparing between the abnormal right Radius (A) and normal left side (B). The abnormal side demonstrates extensive vascularization of the medullary space (Arrow in A)
Radiology Department // Mediclinic Airport 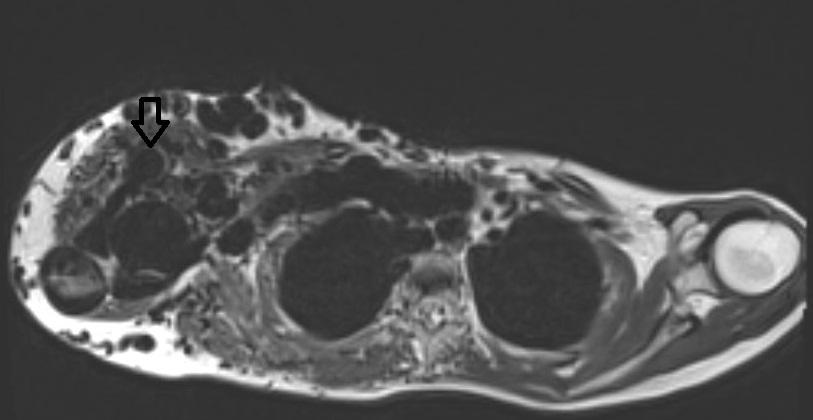 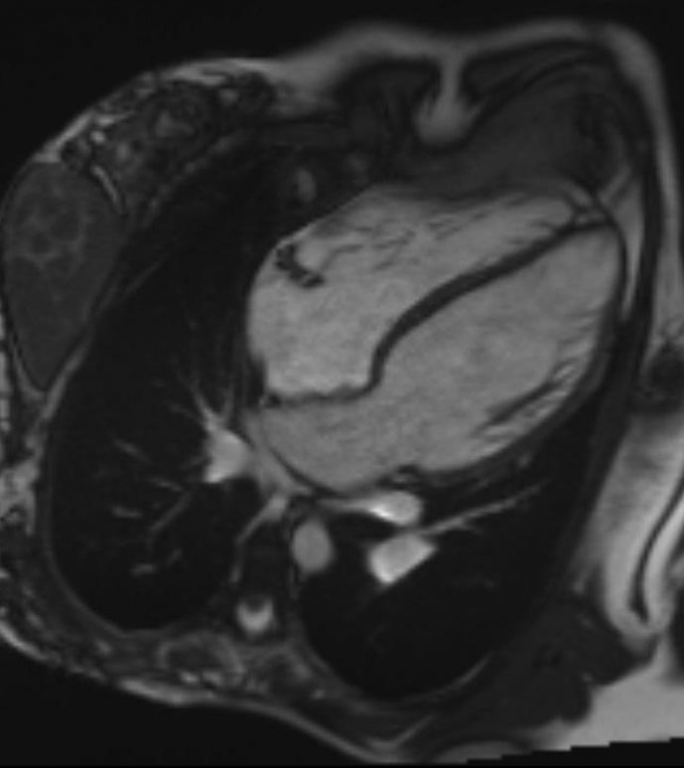 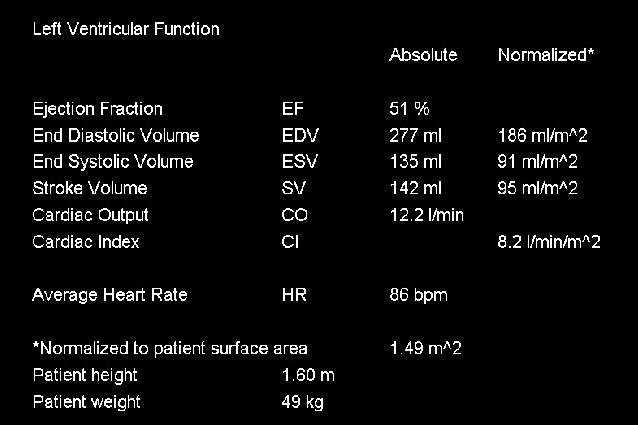 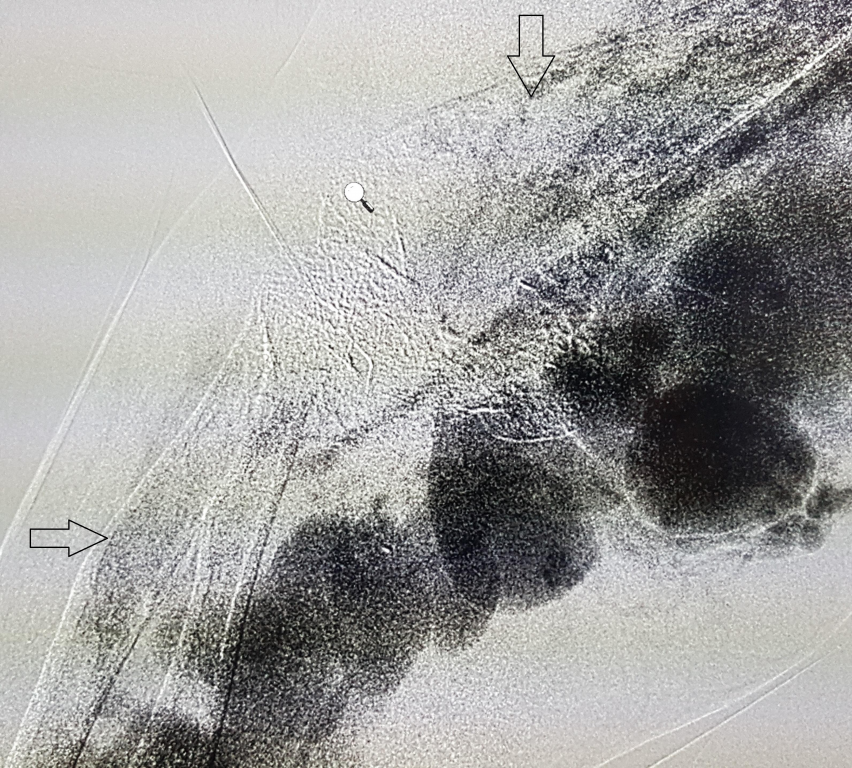 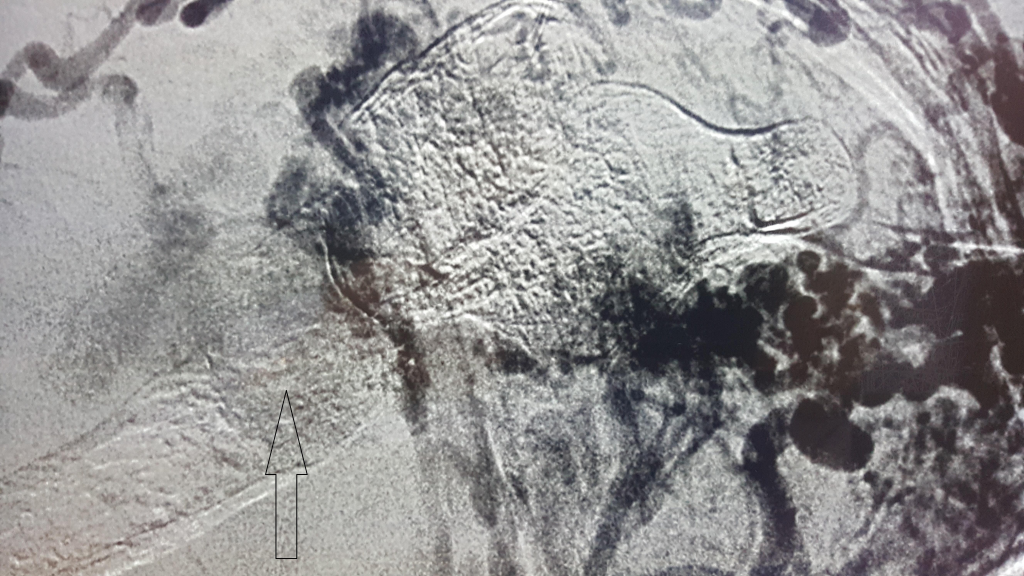