Categories
Area of Interest Arteries / Aorta, Education ; Imaging Technique CT-Angiography
Procedure Education ; Special Focus Embolism / Thrombosis ;
Show more Show less
Download as PDF Print Show related cases Notify admin
Clinical History
A 76-year-old female patient presented to the emergency department with dyspnoea. Arterial blood gas test showed hypoxaemia. The symptoms did not improve with non-invasive ventilation. The patient had undergone spinal transpedicular osteosynthesis from T10 to S1 48 hours ago.
Imaging Findings
A dense tubular-branched opacity in the proximity of the right hilum was observed on the chest radiograph. The morphology of this opacity suggested that it was following the path of a vessel (Fig. 1). Given the chest radiograph findings and the patient’s symptoms, a Computed Tomography Pulmonary Angiography (CTPA) was performed immediately, which revealed that bilateral segmental and sub-segmental pulmonary arteries were filled with a high density material (1, 125 Hounsfield Units), compatible with cement (Fig. 2). The CTPA also showed that cement used for the transpedicular osteosynthesis had migrated trough the vertebral venous plexus (Fig. 3). Those CT findings confirmed the diagnosis of pulmonary cement embolism.
Discussion
Pulmonary cement embolism consists of filling of the pulmonary arteries by cement. It occurs in up to 25% of the patients who undergo percutaneous vertebral cementation techniques, usually vertebroplasty and kyphoplasty [1]. More infrequently (4.1% of the cases), it can also originate from a transpedicular osteosynthesis when augmentation of pedicle screws with bone cement is performed [3]. Pulmonary cement embolism is caused by a leakage of cement through the vertebral venous plexus, which migrates through the inferior cava vein, the azygos system and finally reaches the pulmonary circulation (pulmonary arteries).
This entity is frequently asymptomatic, but it can present with similar symptoms to those produced by a thrombotic pulmonary embolism, such as dyspnoea, tachypnoea or chest pain and they may appear immediately after the surgery or several months later. [2]
On chest X-ray, the cement embolus may be depicted as linear high-density opacities that follow the routes of the pulmonary vessels. On chest CT, the occupation of the pulmonary arteries by a high-density structure compatible with cement makes the diagnosis.
Although the treatment and management of a cement pulmonary embolism is controversial, in general terms, it is the same as for an embolism of thrombotic origin: fibrinolysis if there is haemodynamic instability or anticoagulation therapy if there is no instability. The prognosis depends on the right heart function. [1]
Faced with a patient with dyspnoea and a previous vertebral cementation procedure, we must keep in mind the possibility of a cement pulmonary embolism [2]. In contrast to other embolic diseases, this entity can be diagnosed with a chest radiograph.
Differential Diagnosis List
Pulmonary embolism by cement.
Since the patient had undergone a cemented spinal procedure in the previous 48 hours
radiological findings were highly suggestive of pulmonary thromboembolism by cement. There is no differential diagnosis.
Final Diagnosis
Pulmonary embolism by cement.
References 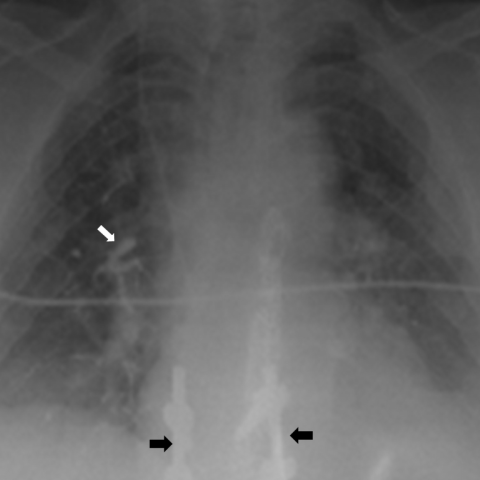 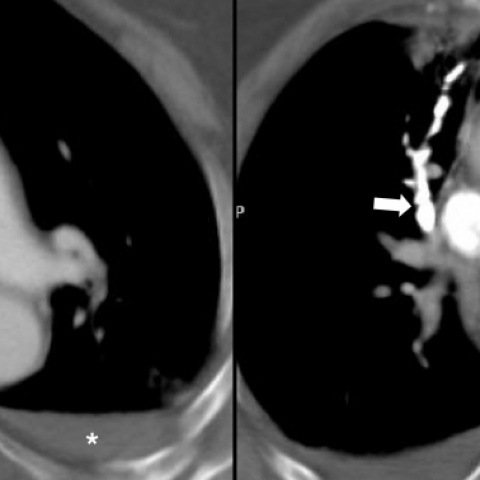 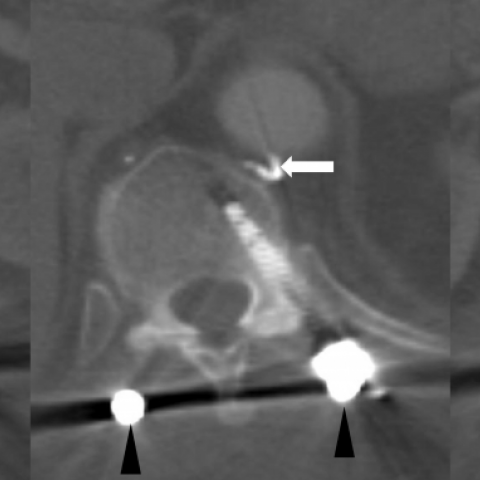 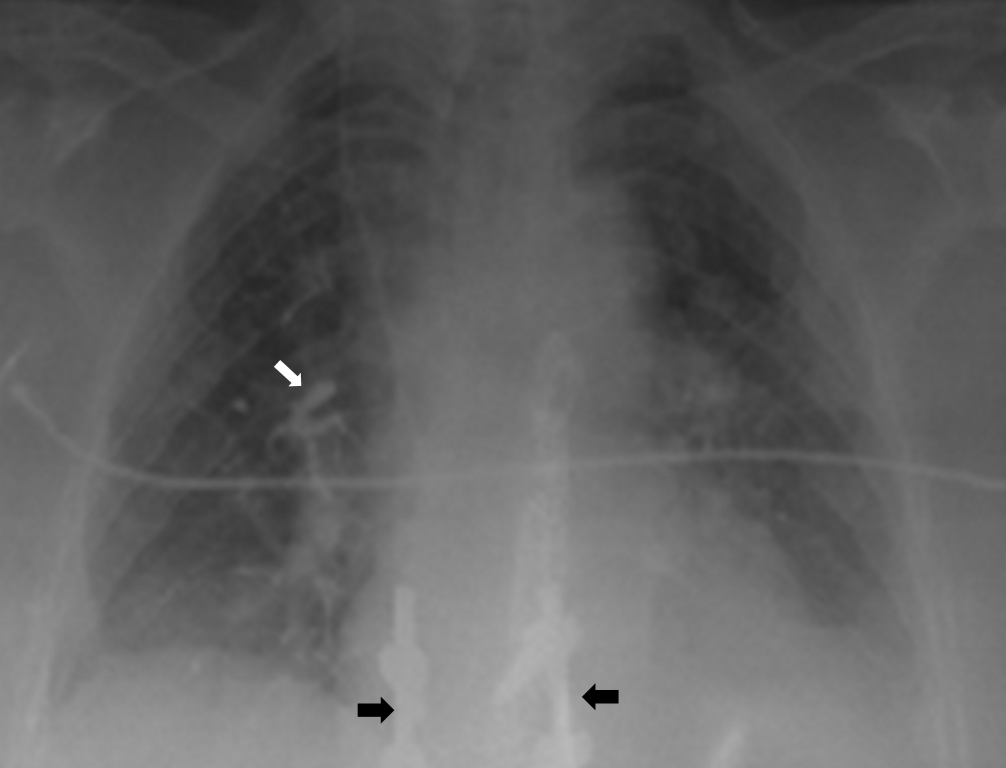