Categories
Area of Interest Head and neck ; Imaging Technique MR
Procedure Imaging sequences ; Special Focus Cysts ;
Show more Show less
Download as PDF Print Show related cases Notify admin
Clinical History
An 18-year-old female patient presented with complaints of progressively increasing headache for the past 2 months. There were no other complaints. On examination there were no signs of neurological deficit or sensory loss.
Imaging Findings
Contrast-enhanced MRI brain demonstrates a large midline well-defined infratentorial extra-axial CSF intensity mass lesion located in the posterior fossa.
It follows CSF signals on all pulse sequences including FLAIR. (Fig. 1, 2)
No enhancement is seen on T1W post-contrast sequences. (Fig. 3)
No restriction is seen on diffusion-weighted imaging and ADC mapping. (Fig. 4, 5)
Anteriorly, it causes mass effect over the brainstem and 4th ventricle resulting in minimal hydrocephalus. It also causes pressure effect over the cerebellar hemispheres more on the right side.
Discussion
Background
Arachnoid cysts are relatively common benign asymptomatic intracranial extra-axial lesions. They are thought to arise due to the congenital splitting of the arachnoid layer with accumulation of CSF within this potential space. Their wall is comprised of flattened arachnoid cells forming a thin translucent membrane. The cyst is devoid of any solid component or epithelial lining. [1] Most common locations include interhemispheric fissure, cerebral convexity, posterior fossa, cisterna magna, cerebellopontine angle, quadrigeminal cistern, spinal canal, ventricles and suprasellar cistern. [2]

Clinical Perspective
These cysts are usually asymptomatic with most of the lesions detected incidentally. When symptoms occur, they are usually the result of gradual enlargement resulting in mass effect. This results in either direct neurological dysfunction or obstructive hydrocephalus. [3]

Imaging Perspective
Arachnoid cysts are well circumscribed, with an imperceptible thin wall, displacing adjacent structures, and following CSF signals on all pulse sequences. They appear hypodense on plain CT scan. On MRI they appear hypointense on T1W and hyperintense on T2W with FLAIR suppression. They do not show restriction on DWI and ADC mapping which helps to differentiate them from their close differential of epidermoid cyst. They do not enhance after gadolinium administration. They can also cause remodelling effect on the adjacent bone resulting in scalloping. [4] Phase contrast imaging can also be employed not only to determine if the cyst communicates with the subarachnoid space, but also to identify the location of this communication. MR cisternography: high resolution sequences such as CISS & FIESTA help to delineate cyst wall and adjacent anatomic structures. [5]

Outcome
A vast majority of arachnoid cysts remain asymptomatic throughout life. If they turn symptomatic then surgery can be contemplated. Both a craniotomy or placement of a cystoperitoneal shunt can be employed. [5] In our case due to the critical location of cyst and pressure effect over the brainstem and cerebellar hemispheres surgical intervention was planned. Excision of the cyst was performed. Our patient improved symptomatically with no neurological deficits. At the 3rd month follow-up visit there was no complaint of headache and the atient did not show any signs of raised intracranial pressure.

Take Home Message
Although these cysts are well known to remain asymptomatic, neurosurgical intervention needs to be done in symptomatic patients. The take home message in our case is that surgical approach should be individualized, depending on the size, location and secondary effects caused by the cyst, as intervention considerably improves the patients’ symptoms and reduces morbidity in symptomatic cases.
Differential Diagnosis List
Posterior fossa arachnoid cyst
Epidermoid cyst
Pilocystic astrocytoma
Final Diagnosis
Posterior fossa arachnoid cyst
References 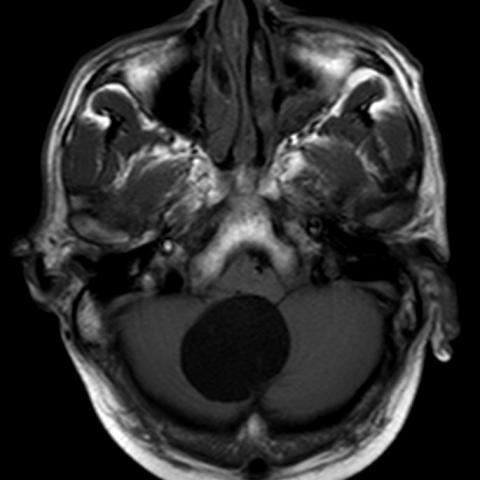 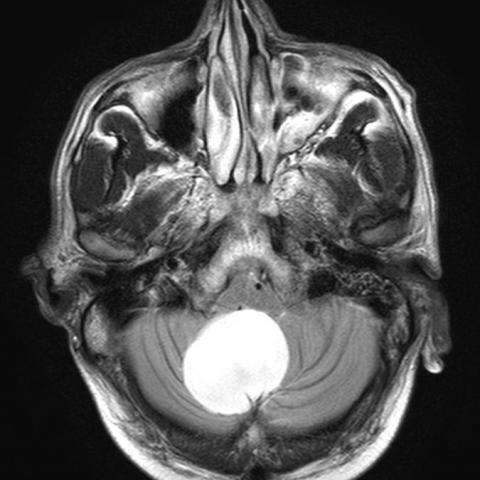 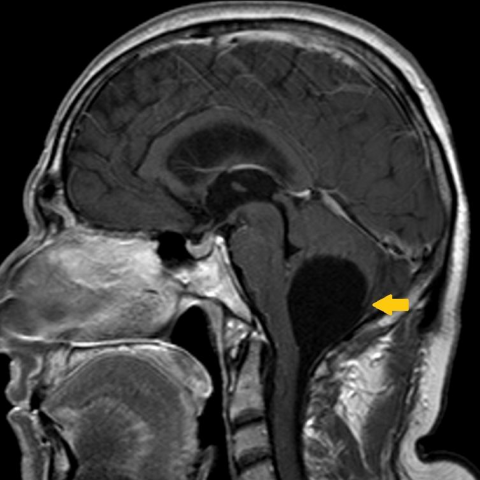 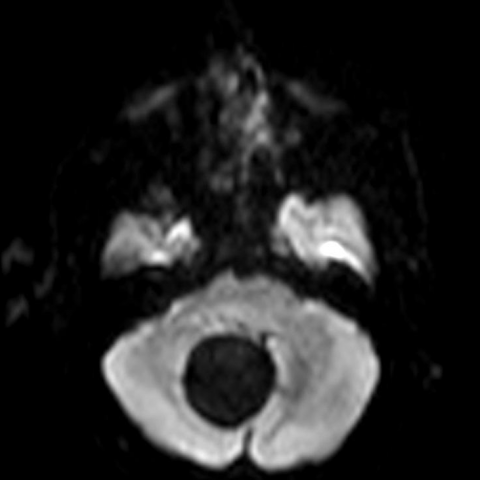 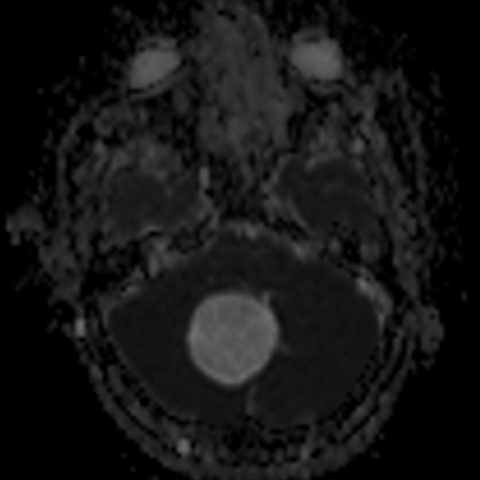 The lesion appears hyperintense on corresponding ADC mapping representing no restriction to diffusion. 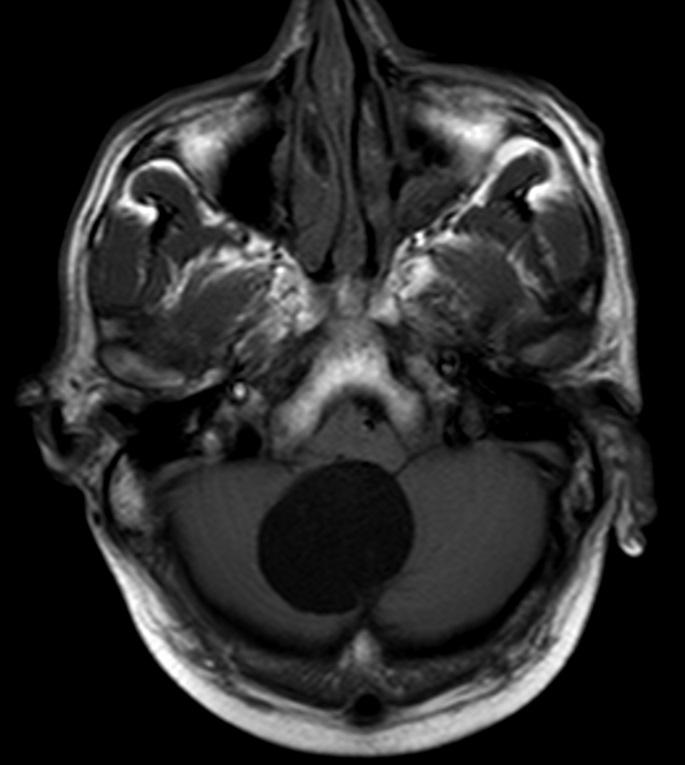 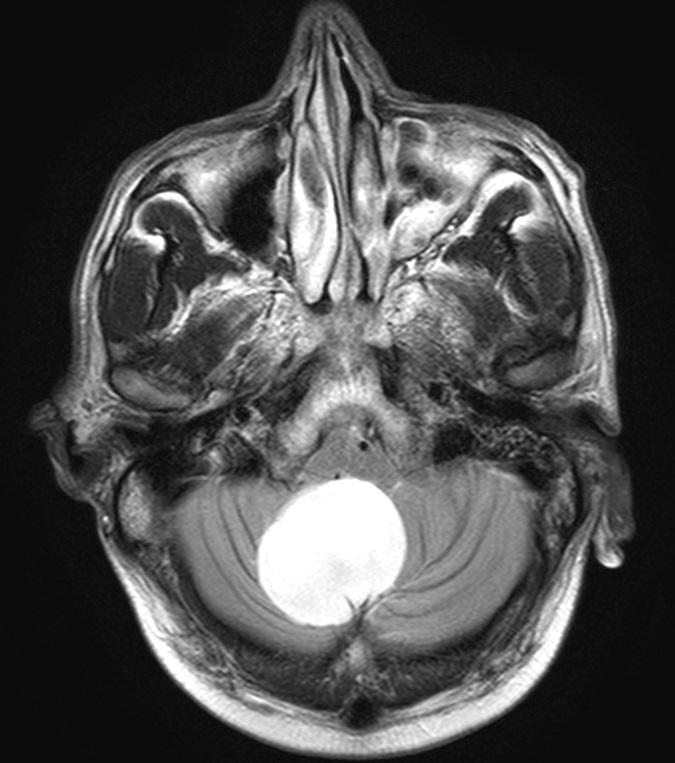 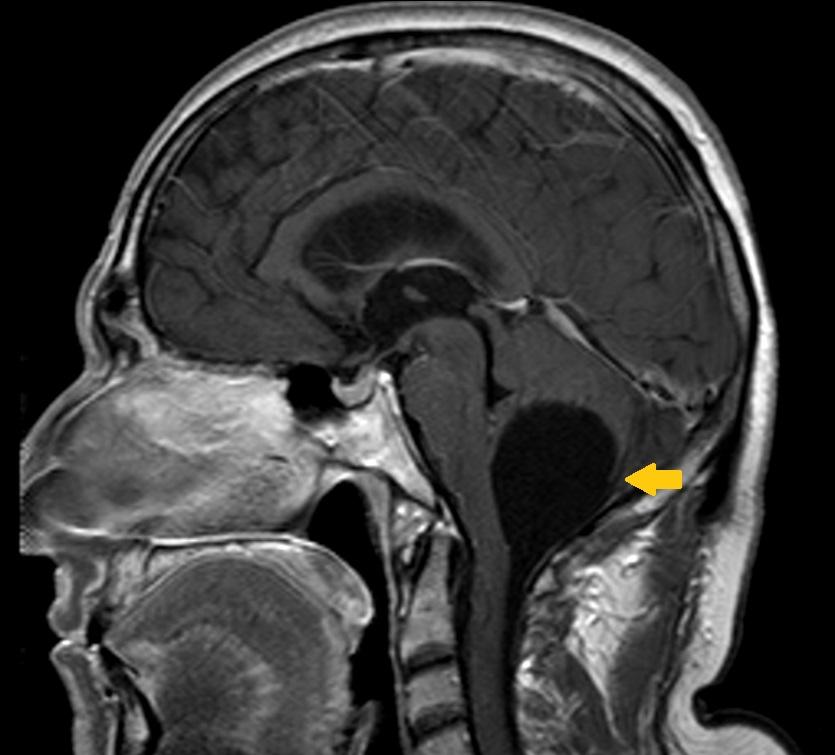 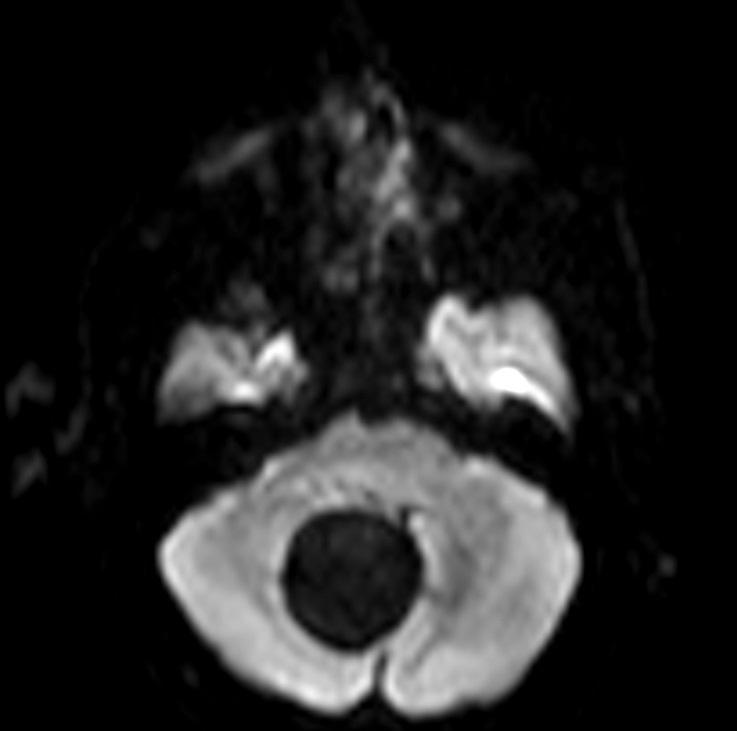 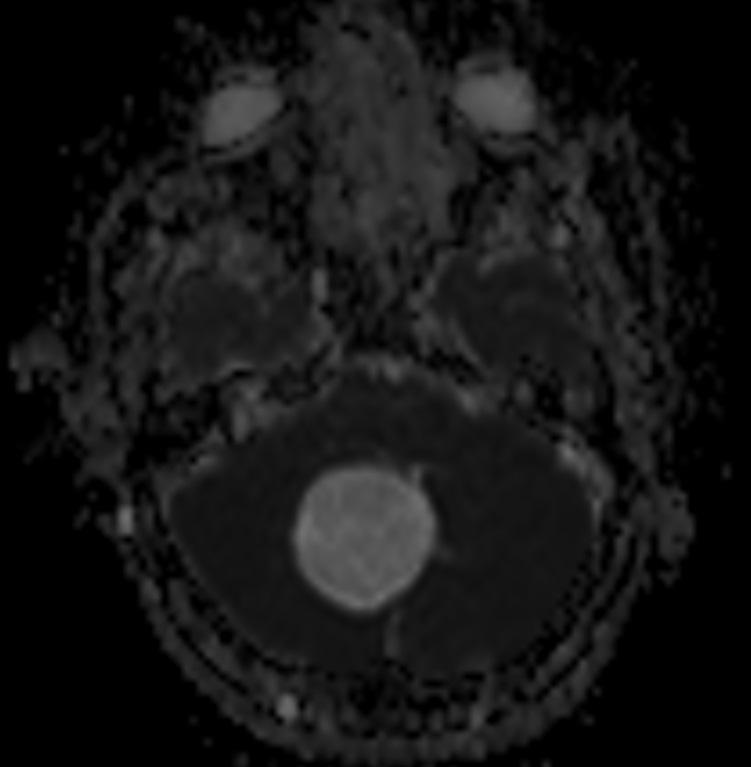