Categories
Area of Interest Pelvis ; Imaging Technique MR
Procedure Diagnostic procedure ; Special Focus Congenital ;
Show more Show less
Download as PDF Print Show related cases Notify admin
Clinical History
A 21-year-old, nulliparous female patient presented with a history of severe dysmenorrhoea and chronic pelvic pain worsening every year, for more than 3 years. Her menstrual cycle was regular with normal flow. History of appendectomy on clinical suspicion of appendicitis one year before was noted.
Imaging Findings
Plain MRI of the pelvis was performed. It revealed a thick-walled lesion contiguous with the left lateral uterine wall. The wall of the lesion showed signal intensity similar to the myometrium on all sequences. A central cystic component was noted, which showed signal intensity consistent with blood degradation products. No communication of the lesion with the endometrial cavity was seen. Both uterine cornua were visualised. The uterine cavity, the junctional zone, the endo-myometrial interface and the myometrium showed normal signal intensity. No pelvic endometriotic deposits or hydrosalpinx were seen. Both ovaries were visualised and were normal.
Discussion
The uterus develops from the embryonic fusion of the two Mullerian ducts. Seven classes of uterine anomalies are described in the literature including septate uterus, arcuate uterus and unicornuate uterus [1]. Uterus-like masses (ULMs) are rare lesions that resemble the uterus both macroscopically as well as microscopically [1]. Such masses can occur within the uterus or any other sites and at any age. Accessory and Cavitated Uterine Masses (ACUM) are non-communicating ULMs that occur contiguously along the wall of the uterus. The uterine cavity in ACUMs is normal unlike other Mullerian anomalies and hence needs to be described more accurately. ACUM is considered to be a developmental anomaly by the majority of authors [2]. It is considered to develop due to a duplication of the Mullerian duct at the level of attachment of the round ligament. ACUMs generally present in women under 30 years. Repeated bleeding within the ACUM during the menstrual cycle causes distension of its cavity and chronic pelvic pain. ACUM may be larger in size when the woman is older. To characterize a lesion as an ACUM on imaging the following criteria need to be met [3]:

(1) An accessory cavitated mass with habitual orientation of the lesion around the round ligament.
(2) Normal uterus, endometrial cavity, fallopian tubes and ovaries.
(3) Cystic component within the lesion showing chocolate-coloured content and signal intensity of blood degradation products.
(4) No signs of adenomyosis in the uterus, however, tiny foci of adenomyosis may be seen in the myometrium of ACUM due to increase intracystic pressure [4].
(5) No pelvic endometriotic deposits.

ACUM may coexist with other Mullerian anomalies as reported in the literature and may further complicate the diagnosis [4]. MRI remains the modality of choice as it clearly distinguishes a contiguous, non-communicating lesion with cystic component within. The uterus, ovaries and fallopian tubes are well demonstrated, and so are the haemorrhagic or endometriotic foci. Other diagnostic modalities include TVS sonography and hysterosalpingography. To our knowledge, most of the cases are often misdiagnosed as cystic degeneration in leiomyomas or adenomyomas or obstructed rudimentary horn. Clinical suspicion of this entity based on the occurrence of symptoms, recurrence of symptoms, patient age and knowledge and awareness of this entity will help to consider preoperative diagnosis of ACUM more accurately. Early diagnosis and early surgical intervention involving laparoscopic removal of the mass can shorten the usual prolonged suffering of these young women.
Differential Diagnosis List
Accessory and cavitated uterine mass
Juvenile cystic adenomyoma
Obstructed rudimentary horn
Degenerated leiomyoma
Final Diagnosis
Accessory and cavitated uterine mass
References 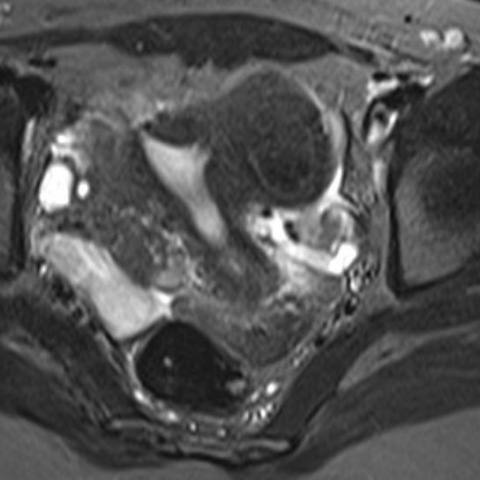 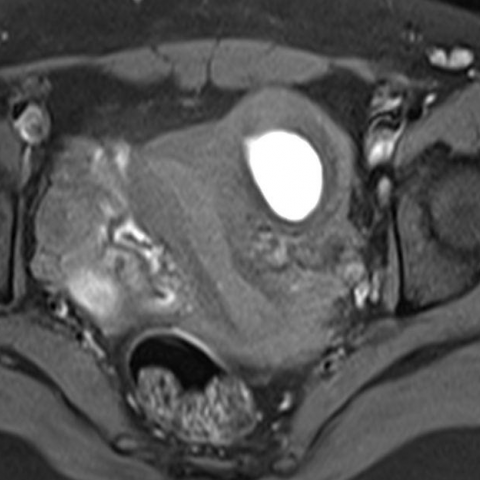 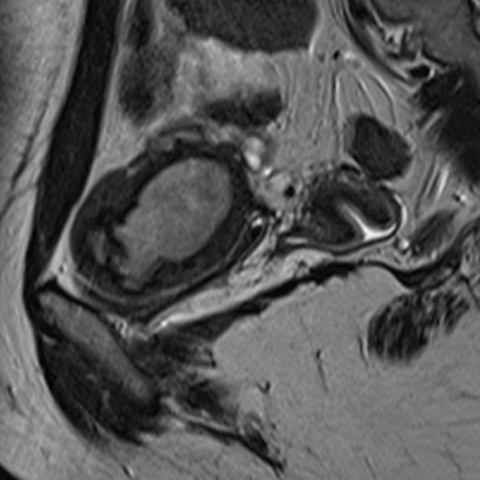 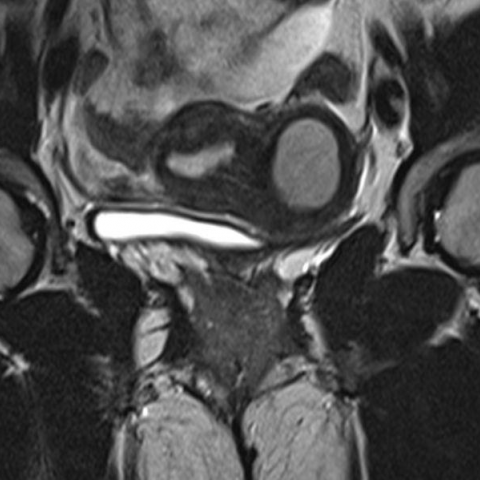 T2W coronal image shows cavitating lesion in the left lateral uterine wall, with no communication with the endometrial cavity. 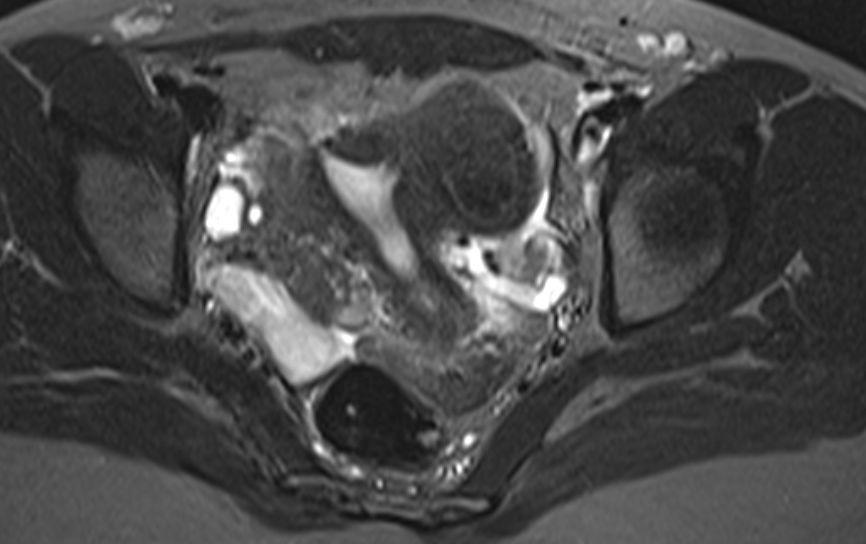 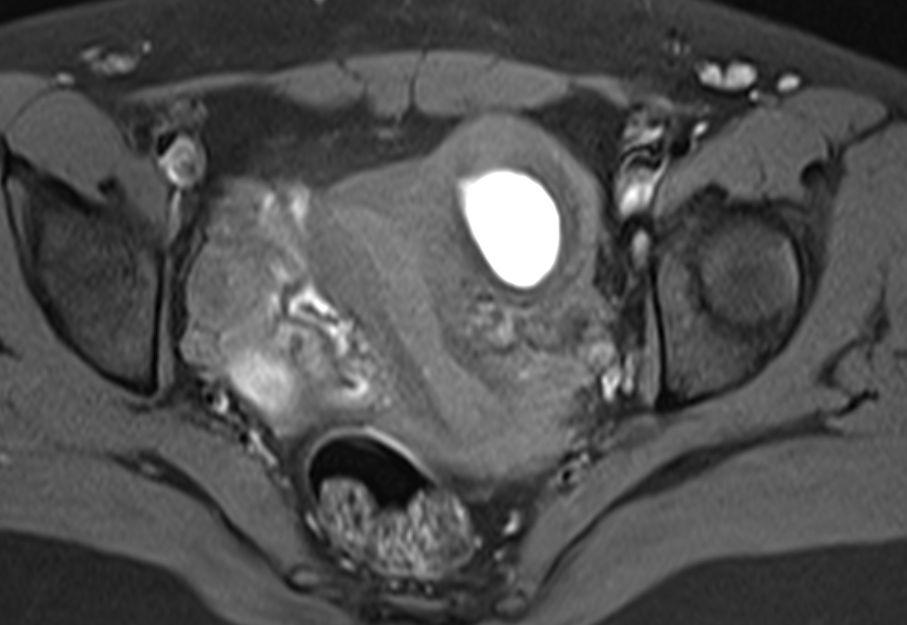 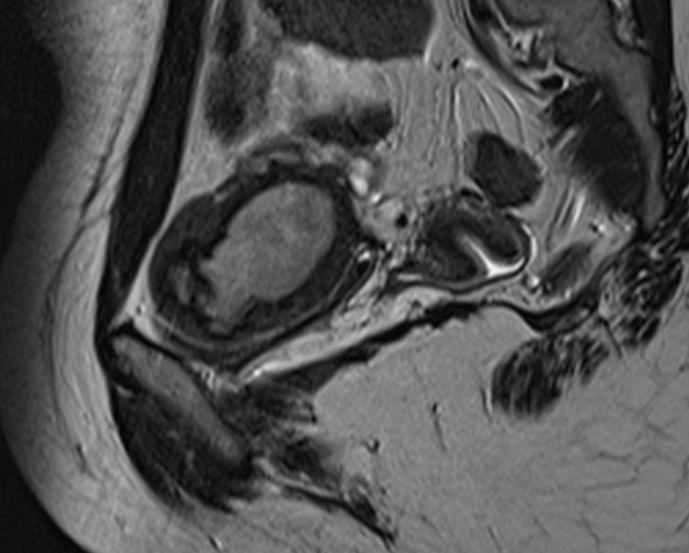 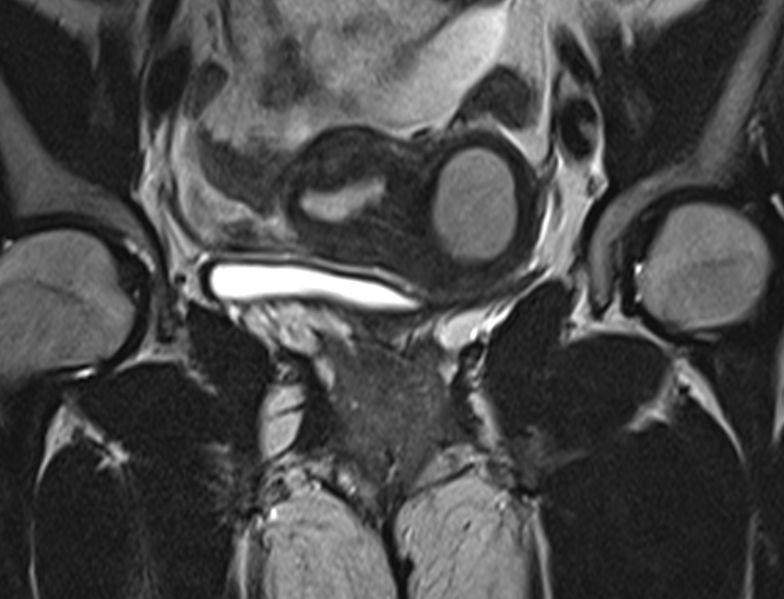