Categories
Area of Interest Abdomen ; Imaging Technique CT, Conventional radiography
No Procedure ; Special Focus Drugs / Reactions ;
Show more Show less
Download as PDF Print Show related cases Notify admin
Clinical History
A 63-years-old male patient with a primary central nervous system lymphoma in treatment with methotrexate-cytarabine with no clinical symptoms or laboratory abnormalities underwent a chest X-ray for the depiction of a peripherally inserted central catheter (PICC).
Imaging Findings
On the chest X-ray, we can see a radiolucent line under the right diaphragm indicating pneumoperitoneum on both frontal and lateral projections, and gas dissecting the fat planes of the abdomen (Fig. 1). Subsequently, the patient underwent an abdominal contrast-enhanced MSCT, which showed extensive pneumatosis intestinalis of cystic predominance in the large bowel, as well as intraperitoneal free air and air dissecting the abdominal fat planes (Fig. 2). Due to the lack of abdominal pain, laboratory abnormalities and lack of other findings suggestive of bowel ischaemia on the MSCT, the patient was diagnosed with benign pneumatosis intestinalis and managed conservatively.
Discussion
Pneumatosis intestinalis is the presence of gas in the intestinal wall. When the air is located in the large bowel, it can also be called pneumatosis coli [1, 2, 3].
There are many theories that try to explain the pathophysiology of this entity, however, the most accepted ones are the mechanical theory, which hypothesizes that an increase of intraluminal pressure leads to the entrance of gas in the intestinal wall for example in cases of bowel obstruction, and the bacterial theory, which explains the presence of pneumatosis intestinalis by the production of gas by gas-forming bacteria that enter the submucosa through mucosal rents or increased mucosal permeability [2].
Pneumatosis intestinalis can be caused by many entities that range from benign diseases such as COPD, endoscopic procedures, or intestinal infections [1, 2, 3], where the patient will be asymptomatic and pneumatosis intestinalis will be an incidental finding that will need no further intervention or follow up, or it can be due to potentially life-threating causes (such as bowel ischaemia) that require immediate intervention. In these cases, patients usually present with abdominal pain and laboratory alterations such as leukocytosis [1, 2, 3].
The best imaging technique to study pneumatosis intestinalis is the MSCT. On it, we can depict findings such as the presence of a thrombus in the mesenteric vessels, portal venous gas, pneumoperitoneum or ascities that are present in potentially-life threatening diseases and that are critical to help us determine whether the pneumatosis is benign or not [1, 2, 3]. However, it is important to bear in mind that there may also be sterile pneumoperitoneum without peritonitis due to the pass of air bubbles because of the rupture of the subserosal cysts to the abdominal cavity in those cases that are due to benign causes, as in this case [1].
In our case, as the patient lacked clinical, laboratory or radiological alterations that suggested a potentially life-threatening cause, and as he was being treated with methotrexate-cytarabine, which are well-known causes for pneumatosis intestinalis [3], he was diagnosed with benign pneumatosis intestinalis and managed conservatively, following a favourable evolution.
To sum up, the detection of pneumoperitoneum and pneumatosis intestinalis requires immediate attention. Pneumatosis intestinalis is a radiological finding and not a diagnose itself, and even though in many cases its origin is benign and it can be managed conservatively, it is very important to recognize those causes that are potentially life-threatening and require immediate intervention [1].
Differential Diagnosis List
Bening pneumatosis intestinalis due to metothrexate-cytarabine.
Not applicable
Not applicable
Final Diagnosis
Bening pneumatosis intestinalis due to metothrexate-cytarabine.
References 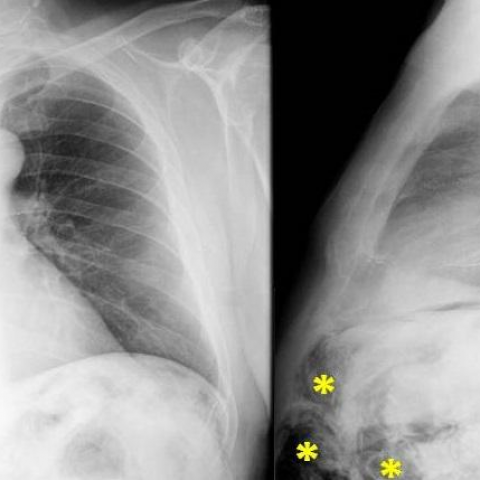 Pneumoperitoneum (green arrow) and air dissecting the fat abdominal planes (yellow asterisk) were incidental findings in this chest X-ray performed for the depiction of a PICC (orange arrow).
Figure 2 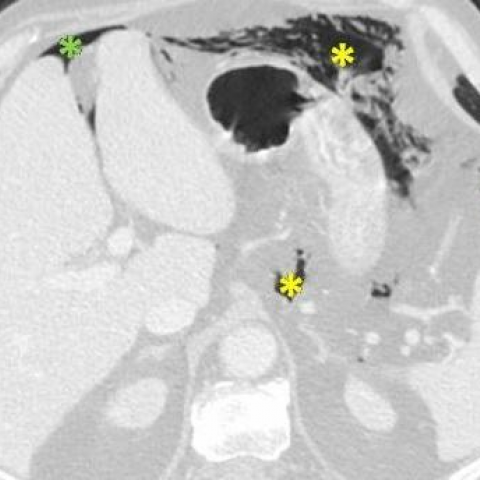 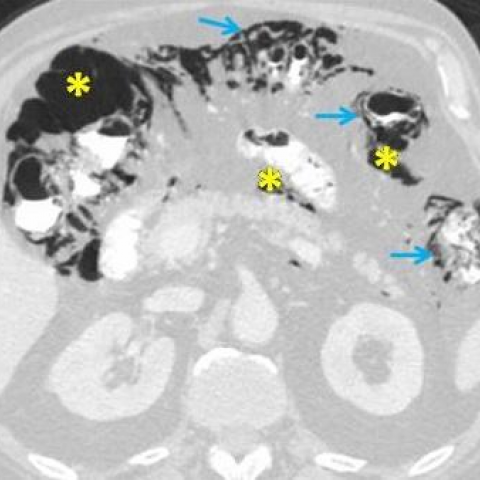 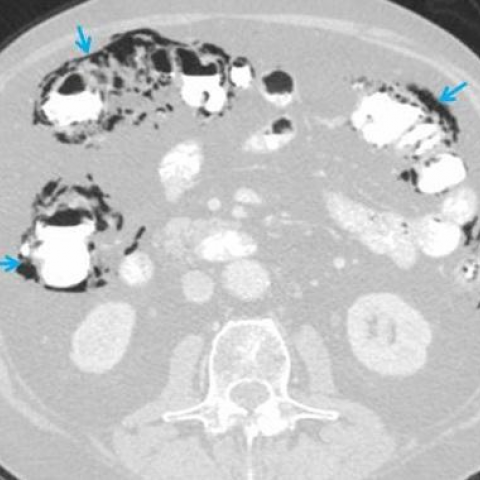 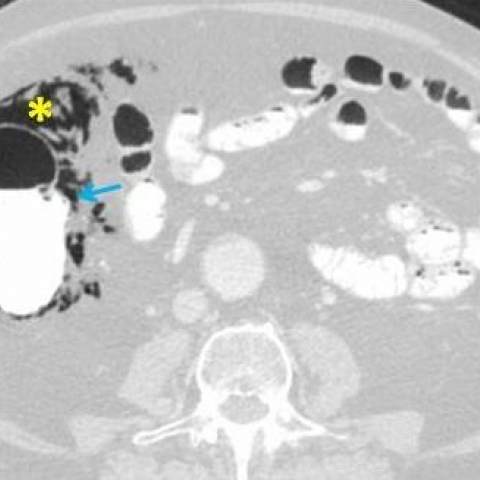 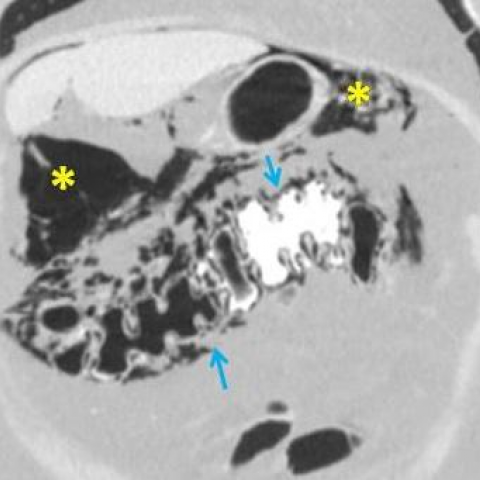 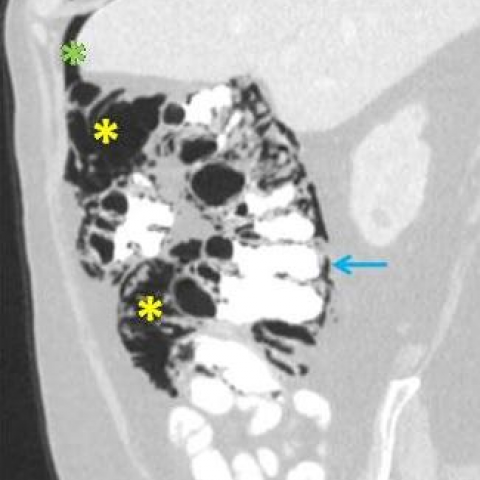 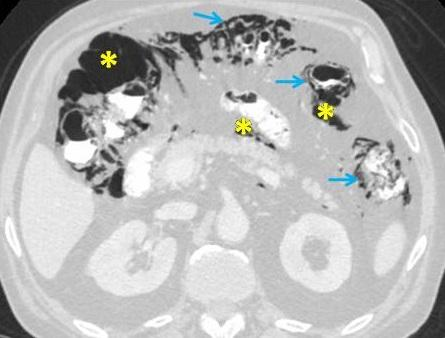 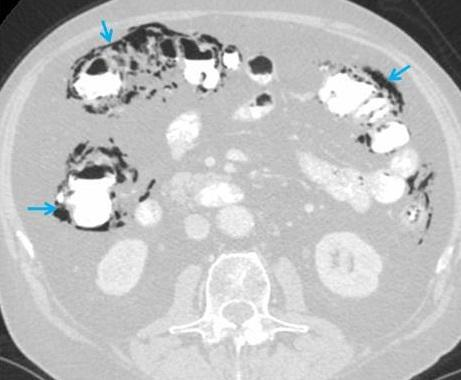 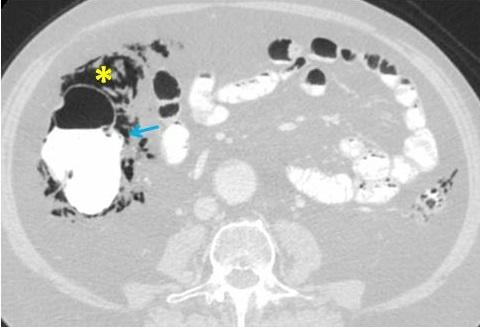 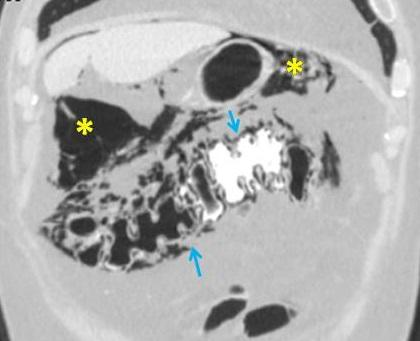 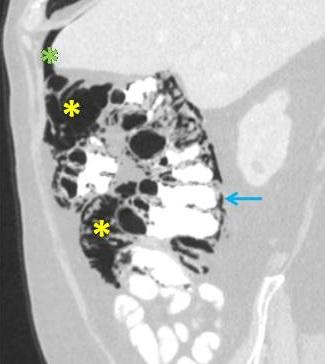