Categories
Area of Interest Thorax, Lung ; Imaging Technique Conventional radiography, CT
Procedure Diagnostic procedure, Computer Applications-3D ; Special Focus Dilatation, Cysts ;
Show more Show less
Download as PDF Print Show related cases Notify admin
Clinical History
A 60-year-old female patient presented with symptoms of cough and breathlessness of three days duration. A provisional diagnosis of asthma of several years' duration followed. She had never been a smoker. Examination noted normal vital signs and inspiratory crepitations in the right interscapular area. The results of blood analysis were within normal limits.
Imaging Findings
A chest radiograph (Fig. 1) and a helical CT scan were performed which showed tracheomegaly. Computed tomography revealed abnormally dilated trachea and bilateral main stem bronchus, with a transversal diameter of trachea of 32 mm, the diameter of the right and left main bronchus being 20 mm and 18 mm respectively. There were irregularity of the tracheal wall, multiple diverticulae/sacculations (diverticula were evident mainly in the posterior tracheal wall) with a few cystic bronchiectasis in the right lower lobe, some of which contained mucoid material (Fig. 2, 3). The coronal reformatted images and the post processed thick minimal intensity images (MinIP) were particularly useful in demonstrating dilated tracheobronchial tree with absence of the cavities at the lung periphery (Fig. 4). Flexible bronchoscopy noted dilated trachea and main bronchi with few tracheal protrusions/diverticula and generalised collapse on expiration with a dilated thin-walled bronchial tree.
Discussion
Tracheobronchomegaly was first described by Mounier-Kuhn in 1932. Its cause is unknown although it is caused by atrophy of the elastic and smooth-muscle fibres of the tracheal and main bronchial walls with resulting defective mucociliary clearance leading to recurrent infection and bronchiectasis. It is more common in middle age men (40-50 years), especially African Americans. Most of the cases are sporadic, but familial cases have been described with a possible recessive inheritance. Secondary tracheobronchomegaly may also occur as a result of Ehlers-Danlos syndrome, Marfan syndrome, cutis laxa in children, Kenney-Caffe syndrome, connective diseases, severe upper lobe fibrosis as in sarcoidosis, cystic fibrosis and chronic airway inflammation [1-5].
The clinical presentations can vary from asymptomatic patients to respiratory failure. The majority of the patients have nonspecific symptoms and are usually diagnosed as having chronic bronchitis or bronchiectasis. Pulmonary function testing may show reduced flow rates, increase in dead space, and increased tidal volume [1, 2, 5].
Mounier-Kuhn syndrome (MKS) has 3 subtypes. In type 1, there is a minimal symmetric dilation of the trachea and the main bronchi. In type 2 is more obvious bizarre enlargement which may include sacculations in the major bronchi. Type 3 is characterized by extension of dilation and diverticula to the distal bronchi [1, 3].
Diagnosis is generally made radiographically by chest radiography, however, it can be easily overlooked on radiographs. CT scan remain the mainstay modality for diagnosing the disease. It helps in accurate measurement of tracheobronchial tree and associated diverticulosis (1/3 patients). The diagnosis is made when the transverse diameter of trachea is greater than 3.0 cm and that of right and left main bronchi is more than 2.4 cm and 2.3 cm, respectively. In females, it can be considered to be present when transverse and sagittal diameters of the trachea exceed 21 and 23 mm, respectively, and the diameters of the right and left main bronchi exceed 19.8 and 17.4 mm, respectively. With MinIP images one can get a wholesome idea of tracheobronchial tree. Bronchoscopy is useful to confirm the diagnosis when CT images are not conclusive. On bronchoscopic imaging the trachea and major bronchi distend with deep inspiration and collapse on expiration [1, 3, 4].
There is no specific treatment for MKS. Asymptomatic patients usually require no treatment. Smoking cessation is beneficial. Symptomatic patients can be managed by bronchodilators, antibiotics, and chest physiotherapy and postural drainage. Surgery (resection or stenting) has a minimal role in treatment [1, 4, 5].
Differential Diagnosis List
Mounier-Kuhn syndrome
Recurrent respiratory tract infection and bronchiectasis
Williams-Campbell syndrome
Tracheomalacia
Final Diagnosis
Mounier-Kuhn syndrome
References 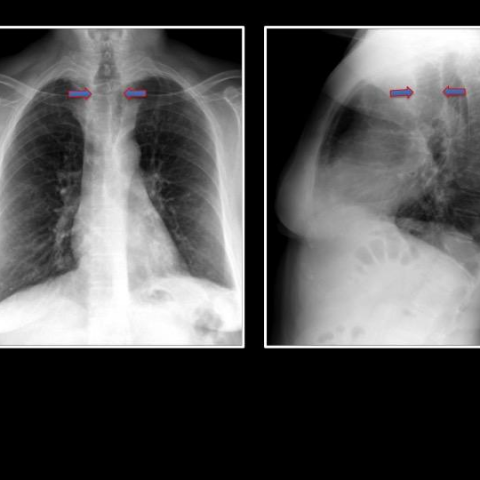 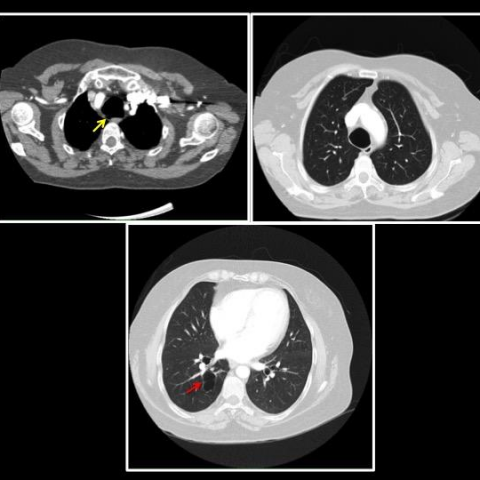 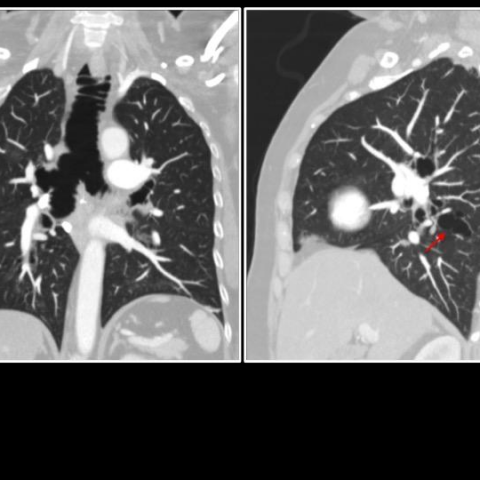 Coronal and sagittal reformatted images with lung window setting: tracheomegaly with irregularity of the tracheal wall, multiple sacculations and with cystic bronchiectasis (arrow) in the right lower lobe
Figure 4 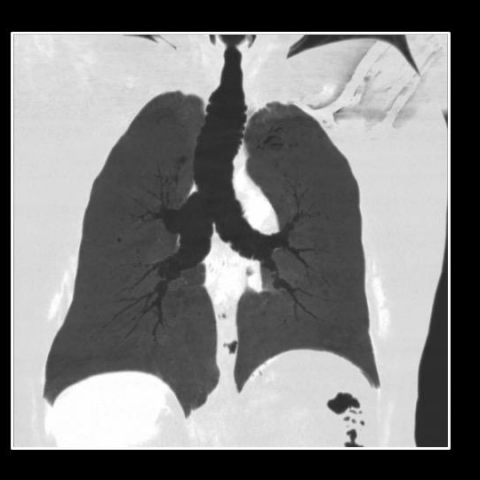 The post-processed thick minimal intensity images (MinIP) were particularly useful in demonstrating dilatation and irregularity of tracheobronchial tree with absence of the cavities at the lung periphery.
Figure 5 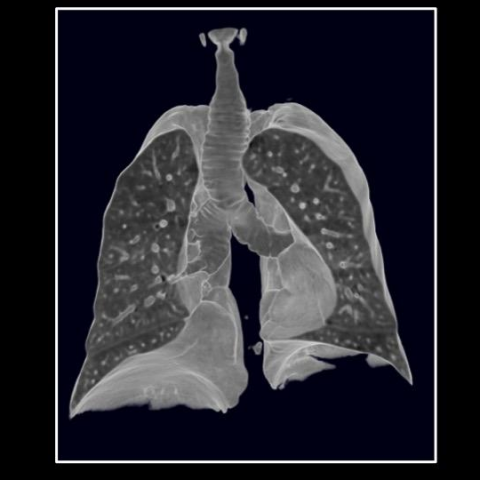 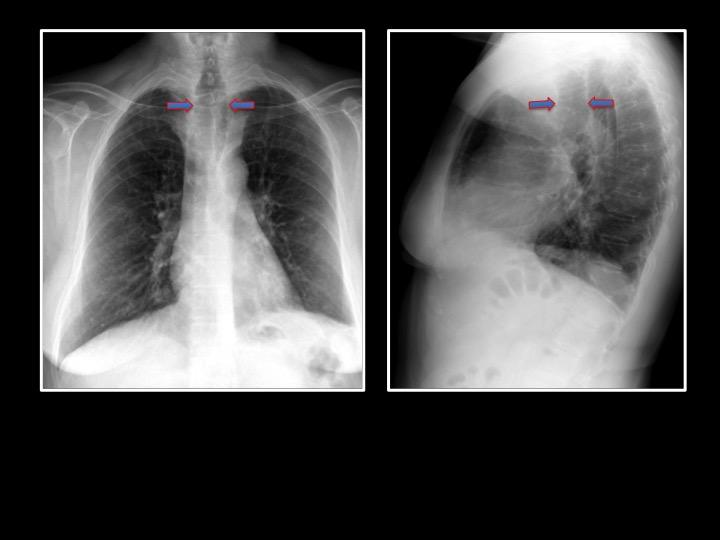 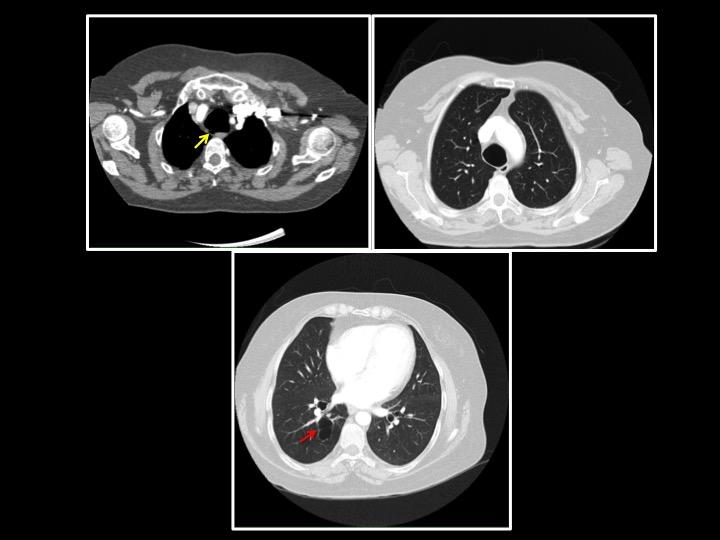 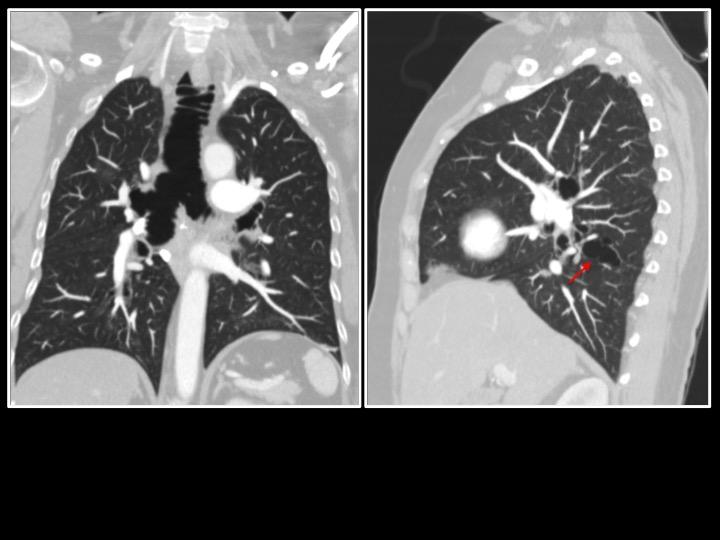 Coronal and sagittal reformatted images with lung window setting: tracheomegaly with irregularity of the tracheal wall, multiple sacculations and with cystic bronchiectasis (arrow) in the right lower lobe
Department of Radiology University Hospital of Guadalajara. Spain 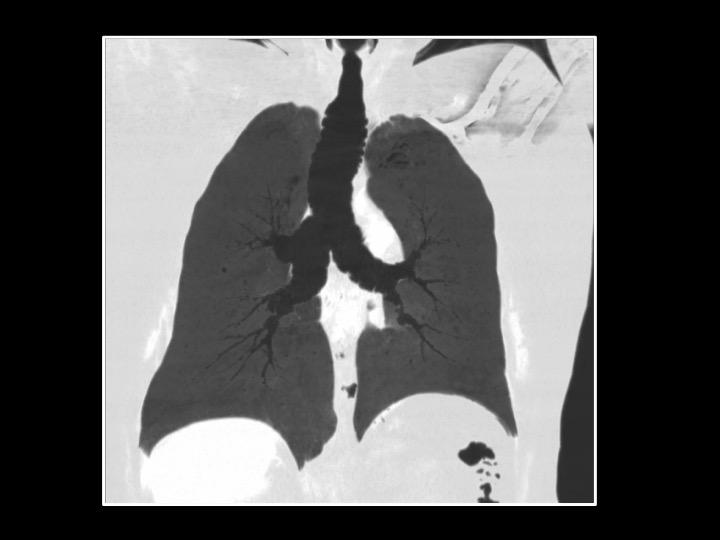 The post-processed thick minimal intensity images (MinIP) were particularly useful in demonstrating dilatation and irregularity of tracheobronchial tree with absence of the cavities at the lung periphery.
Department of Radiology University Hospital of Guadalajara. Spain 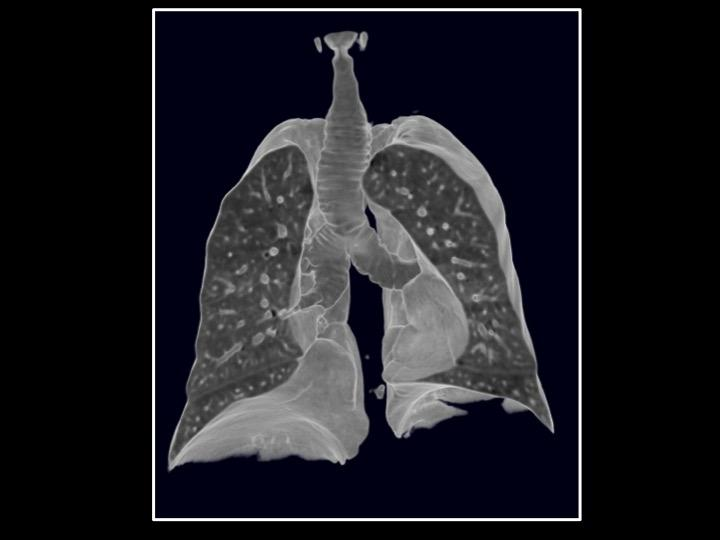