Fig 1 c, d and e show the portal and venous phases respectively showing a large ill-defined area of heterogeneous hypodensity in the right lobe of the liver consistent with Grade VI injury (AAST Grading). Right hepatic vein and anterior and posterior segmental branches of right portal vein could not be visualised suggesting vascular injury. Associated shattered right kidney and gross haemoperitoneum are seen on the images.

Hepatic pseudoaneurysm (HPA), a rare complication after liver injury, is seen in approximately 1% of hepatic trauma cases [1]. The most common cause of liver injury is blunt abdominal trauma, mostly due to motor vehicle crashes. HPA is also reported after hepato-biliary surgery, pancreatitis, cholelithiasis and liver-related invasive procedures [2].

A pseudoaneurysm is a false aneurysm due to a contained rupture of the arterial wall, in which blood collects without walls, seen as an outpouching communicating with the artery. It can morphologically appear similar to true aneurysm as saccular or fusiform. Rarely a third entity of mixed saccular - fusiform form called serpentine type may also be seen, serpentine referring to its meandering patent channel.

Symptoms of an HPA may be clinically silent to symptomatic with abdominal pain, haemoperitoneum, hypovolaemia and if it occurs as a delayed complication, anaemia or jaundice can occur [1]. Acute upper gastrointestinal bleeding and shock are the ultimate clinical manifestations. [3]

The commonest complication of HPA is rupture. Rupture can occur into the peritoneal cavity, the venous, portal, biliary system (haemobilia) or gastrointestinal tract (mainly the duodenum).

On Doppler ultrasound, HPA is seen as a rounded anechoic/hypoechoic structure related to hepatic artery in intrahepatic location or at hilum, showing bidirectional turbulent flow with spectral analysis not typical of hepatic artery. Contrast imaging is most often required to study the size of the sac and neck of pseudoaneurysm, feeding artery, presence of any variant arterial anatomy, arterioportal/arteriovenous fistula and to rule out rupture. Multiphase CT hepatic angiography study is the preferred modality, though MRI Gadolinum sequences can also be used. Intensely arterial phase enhancing outpouching close to hepatic artery, although sometimes delayed filling in of the contrast may be seen with enhancement similar to artery. Nearly 75% of all hepatic artery pseudoaneurysms are extrahepatic, with only 25% being intrahepatic. The right hepatic artery is more often involved than the left [4].

This patient underwent coeliac angiogram and feeders supplying large tortuous HPAs were superselectively intubated with a Progreat microcatheter and Synchro Y-adaptor, and successfully embolised with micronester fibered coils. She made it post-embolisation, which was uneventful. 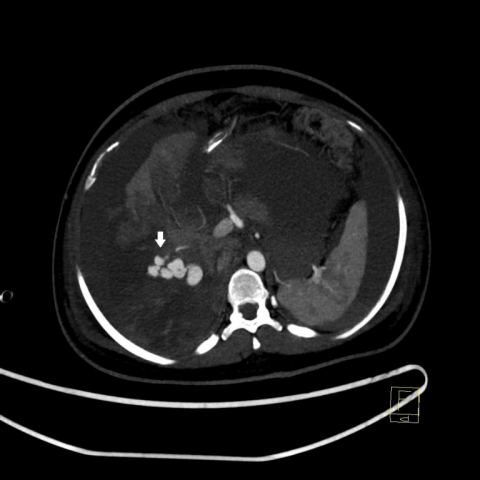 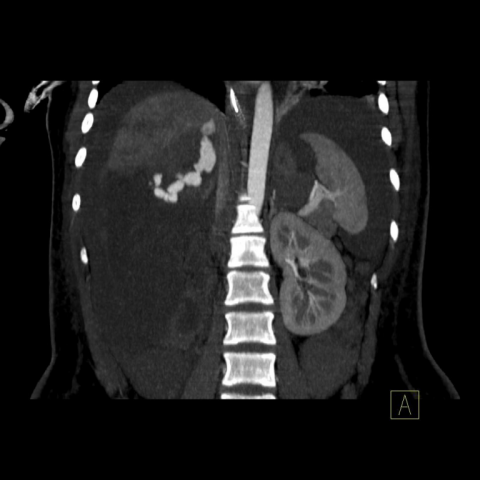 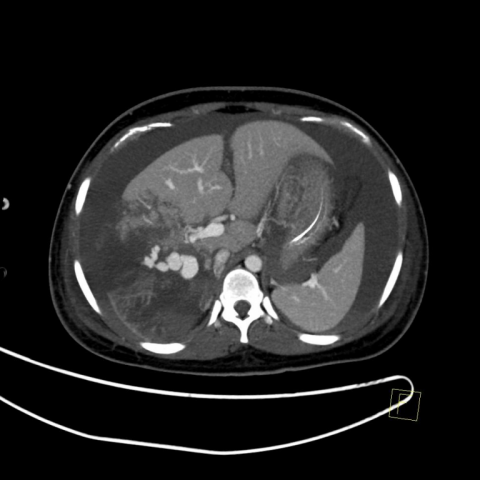 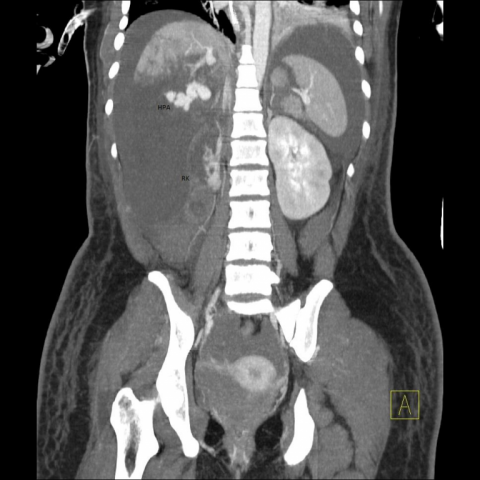 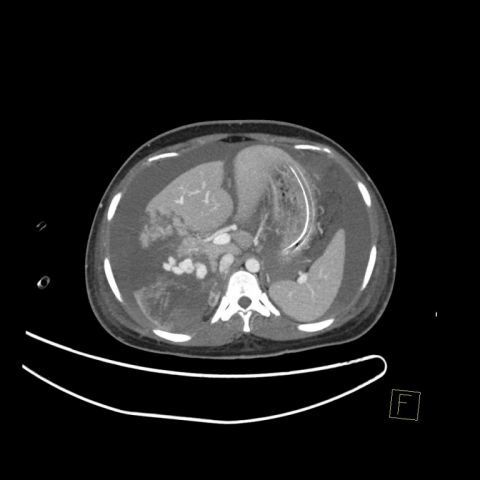 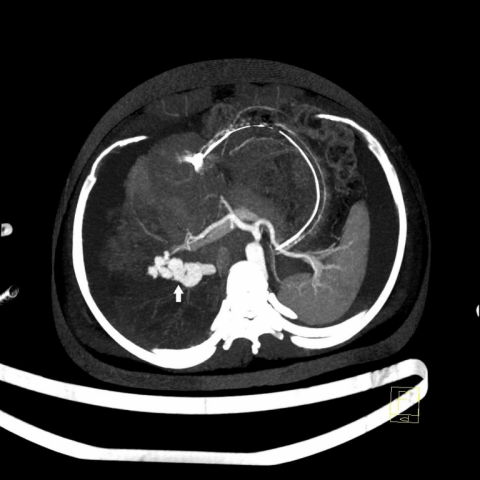 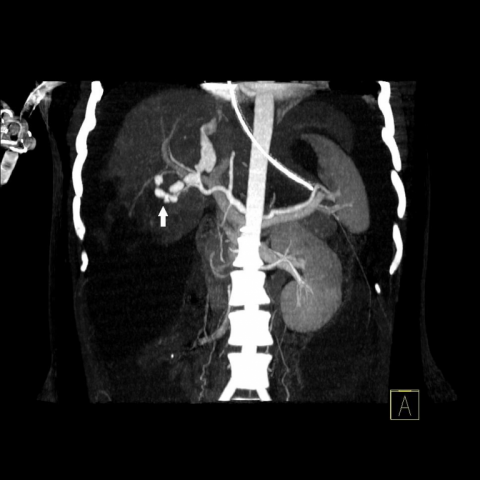 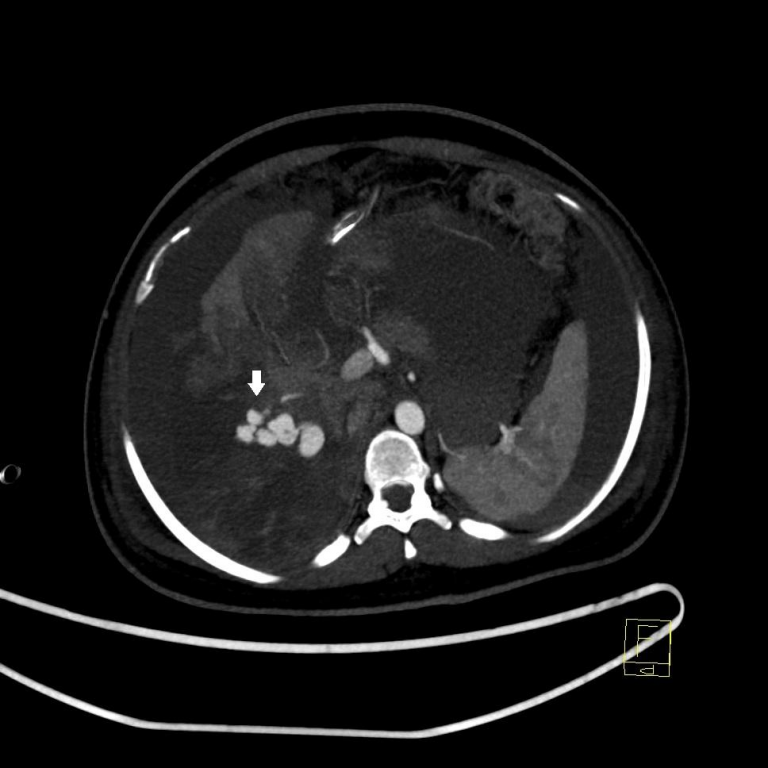 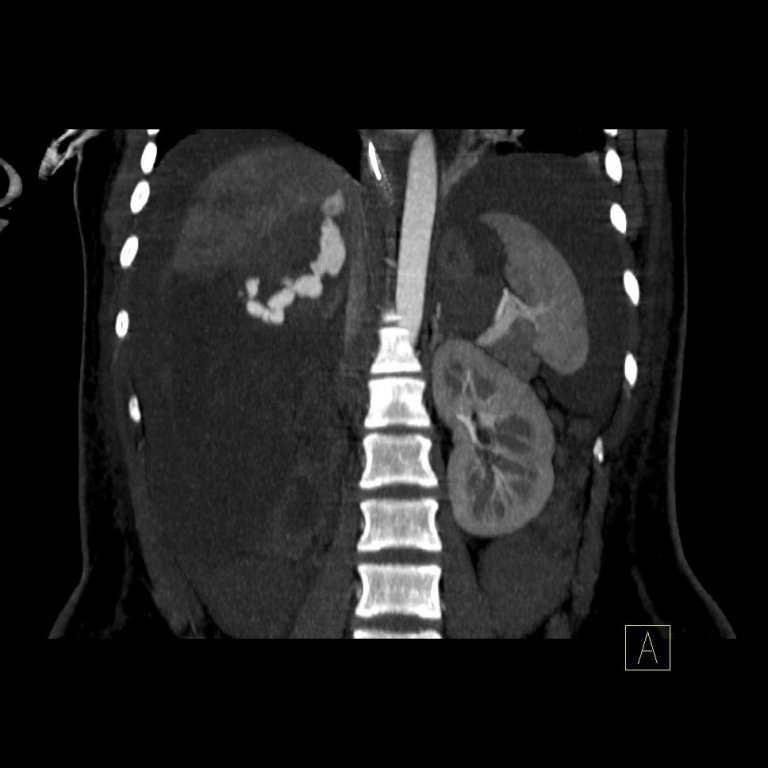 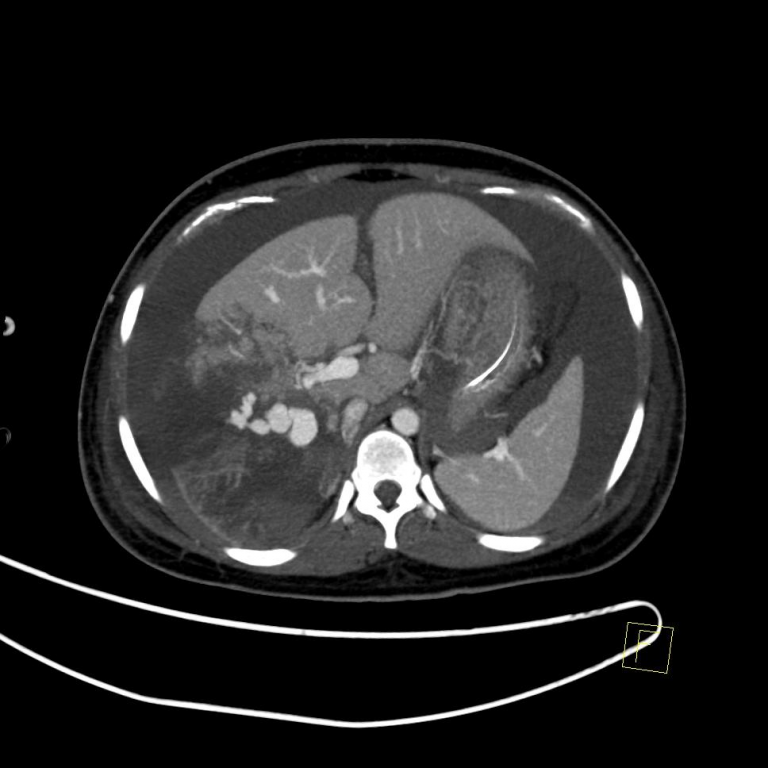 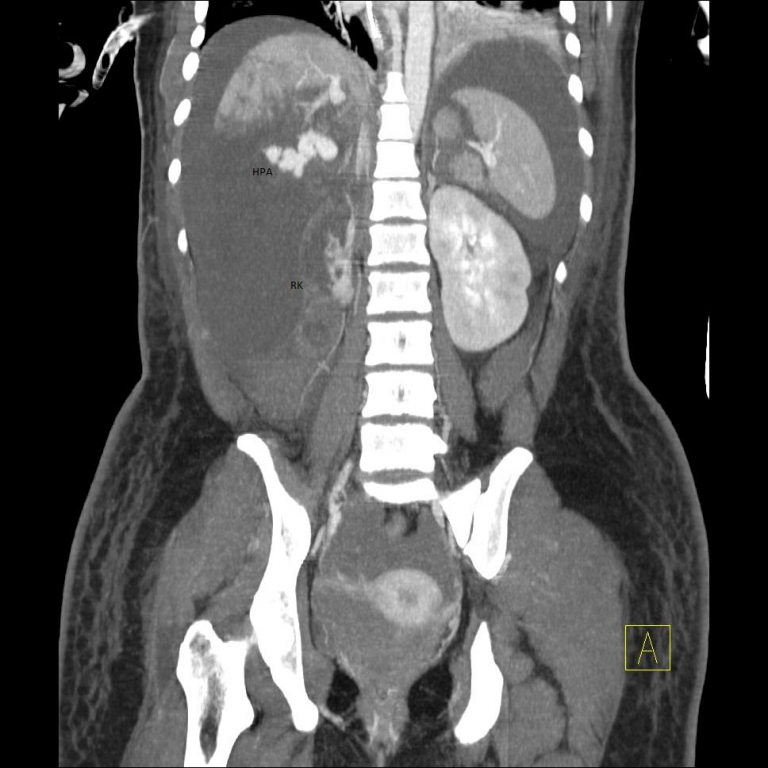 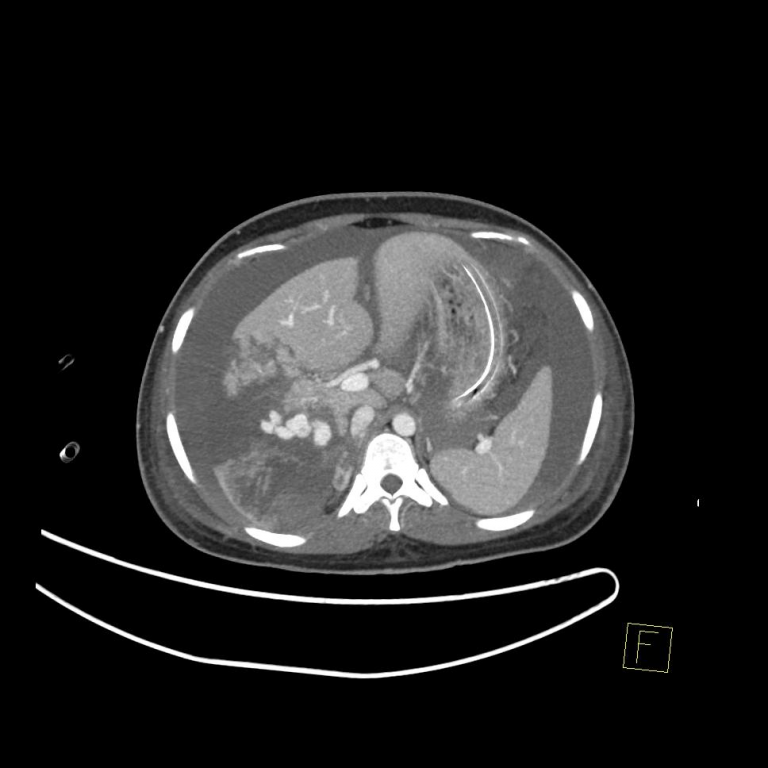 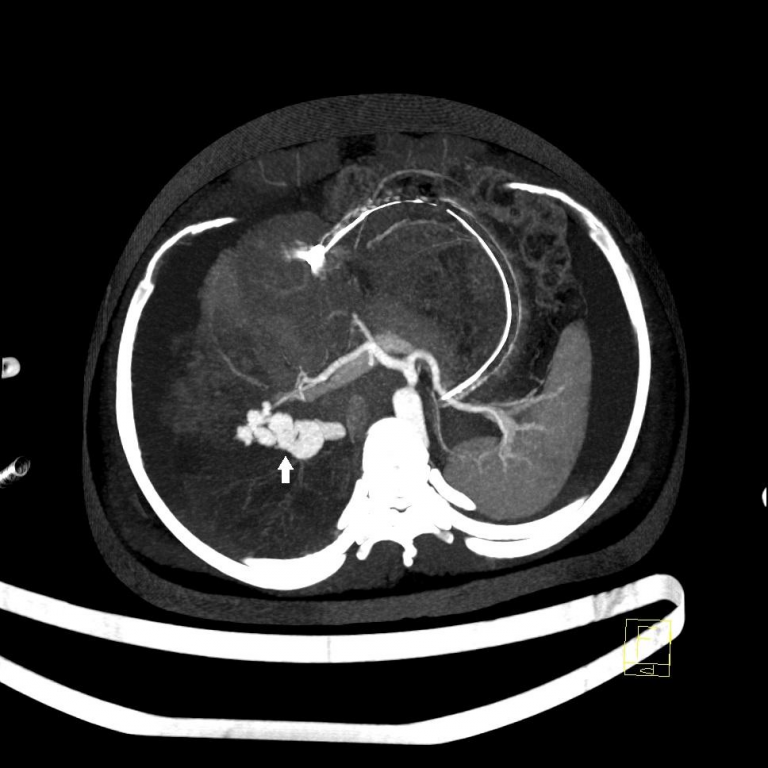 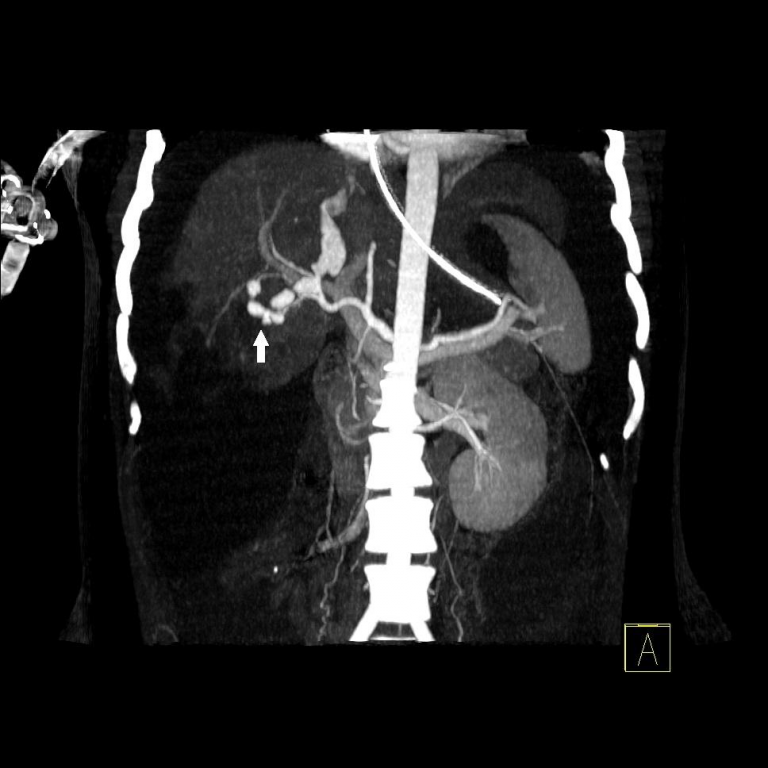