Categories
Area of Interest Head and neck ; Imaging Technique MR
Procedure Imaging sequences ; Special Focus Cysts ;
Show more Show less
Download as PDF Print Show related cases Notify admin
Clinical History
The patient presented with headache, generalized weakness, abnormal gait and loss of balance which gradually developed over the period of the past 2 years. There was no sensorymotor deficit.
Imaging Findings
Well-defined abnormal signal intensity area is seen originating in midline from the basal cisterns of the posterior cranial fossa with extension between the cerebellar hemispheres, predominantly on the left side. It shows CSF signals on all pulse sequences giving "dirty CSF" appearance [Fig. 1, 2, 3]. Hyperintense signals are seen on DWI with hypointensity on corresponding ADC mapping representing diffusion restriction [Fig. 4, 5]. No enhancement is seen after Gadolinium administration [Fig. 6]. It causes compression over the 4th ventricle resulting in moderately dilated 3rd and lateral ventricles [Fig. 7]. It causes indentation over the brain stem and upper cervical cord resulting in their anterior displacement [Fig. 8]. It also causes marked compression over the cerebellar vermis and cerebellar hemispheres, predominantly on the left side [Fig. 7].
Discussion
Background
Intracranial epidermoid cysts are relatively common congenital lesions. These account for approximately 1% of all intracranial tumours. [1] They are predominantly congenital and result from inclusion of ectodermal elements during neural tube closure. They are usually very slow-growing and usually present from second to fourth decade of life. [2]

Clinical Perspective
Signs and symptoms of epidermoid cysts are due to the gradual mass effect that they cause. Usual presenting symptoms are headache, nerve deficits, cerebellar symptoms, seizures and raised intracranial pressure.

Cysts appears as lobulated lesions that exert gradual mass effect and insinuate between adjacent structures. It is not unusual for an epidermoid cyst to encase adjacent nerves and vessels. A common feature of posterior fossa cysts is displacement of the basilar artery away from the pons. [3] Their internal signals mimics CSF on CT and MRI, with the exception of DWI which demonstrates restriction. They do not suppress completely on FLAIR images and show "dirty CSF" appearance. Calcification is present in almost 10%–25% of cases. [4]

Outcome
Surgical excision of the lesion was carried out as it is the treatment of choice in symptomatic patients. Although complete resection is often difficult as not all tissue can be removed, especially from around cranial nerves and vessels, it was achieved in our case. Histopathology correlated well with the radiological findings. Patient was symptomless in the immediate post-operative period with no neurological deficits. At first month follow up there were no complaints of headache, abnormal gait or loss of balance. 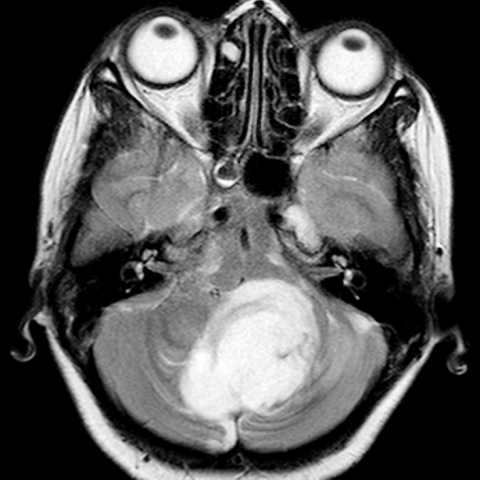 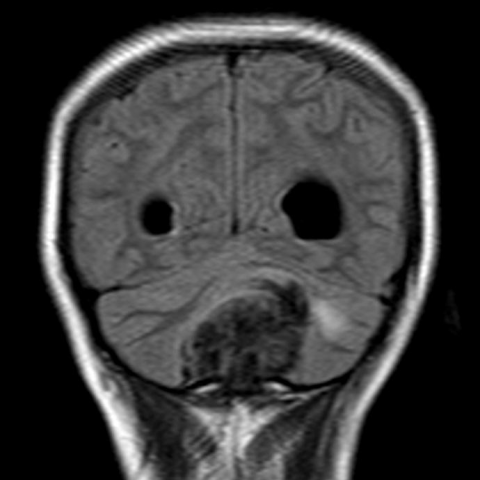 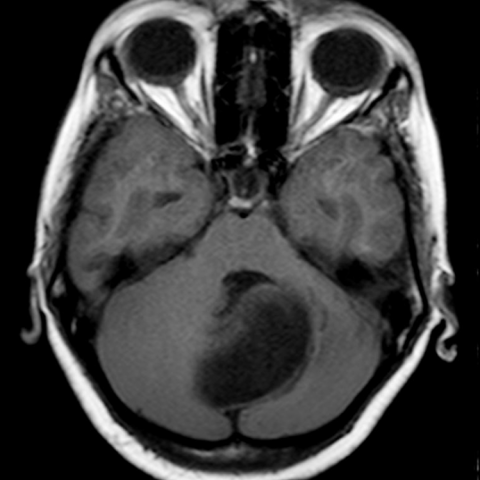 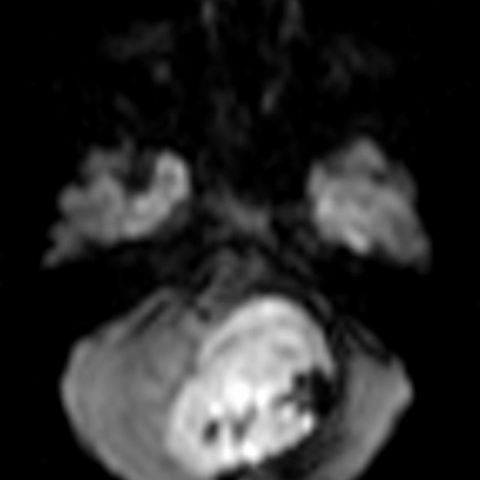 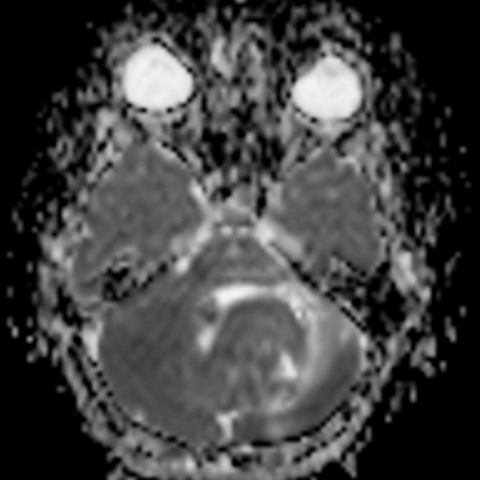 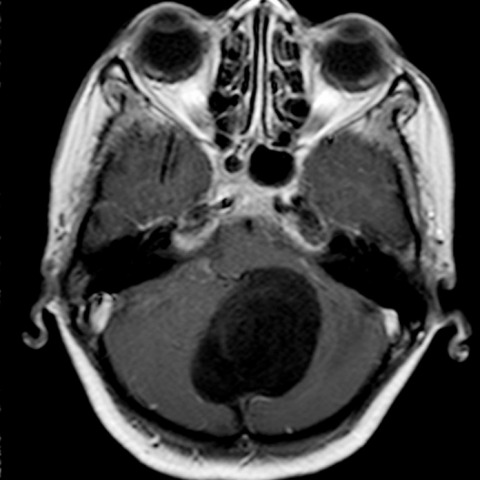 No enhancement on post-Gadolinium sequences.
Figure 7 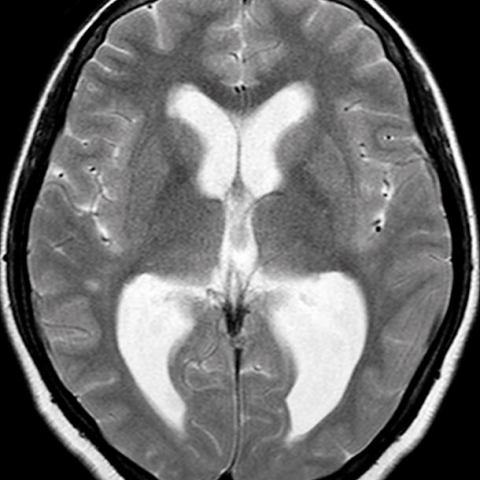 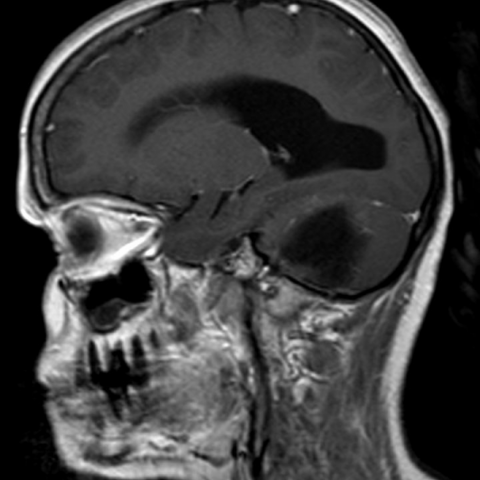 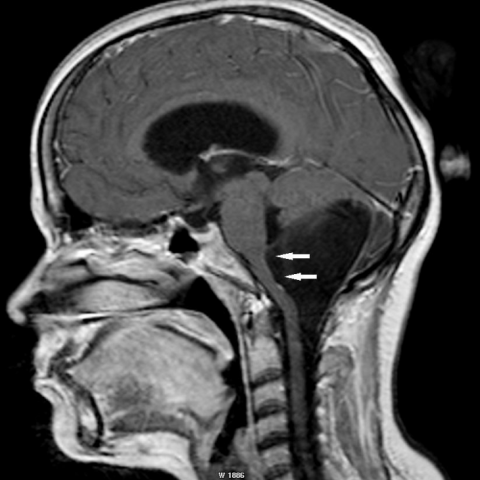 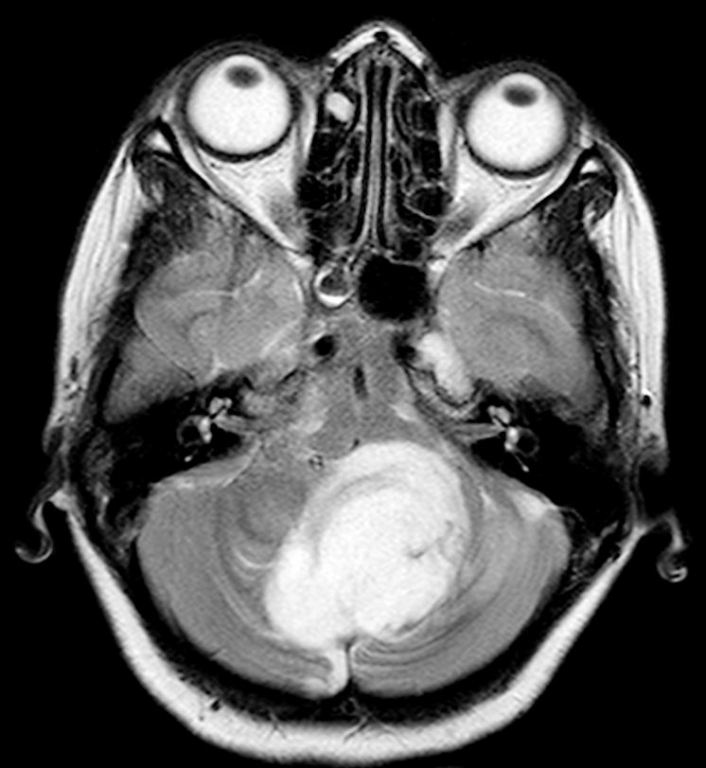 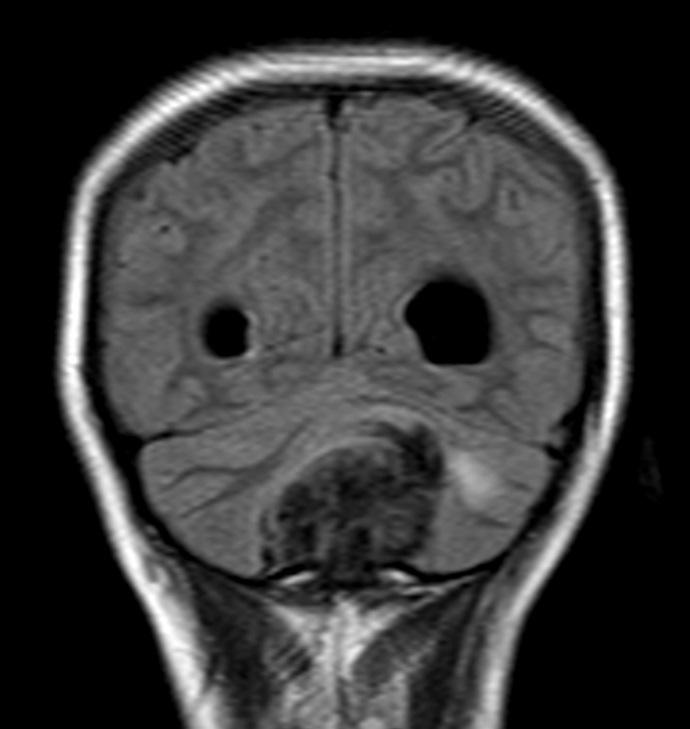 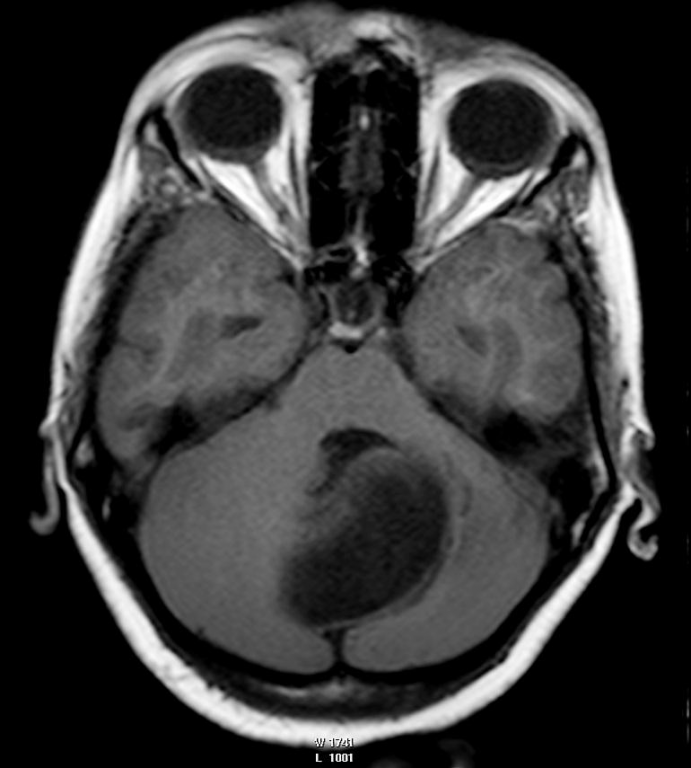 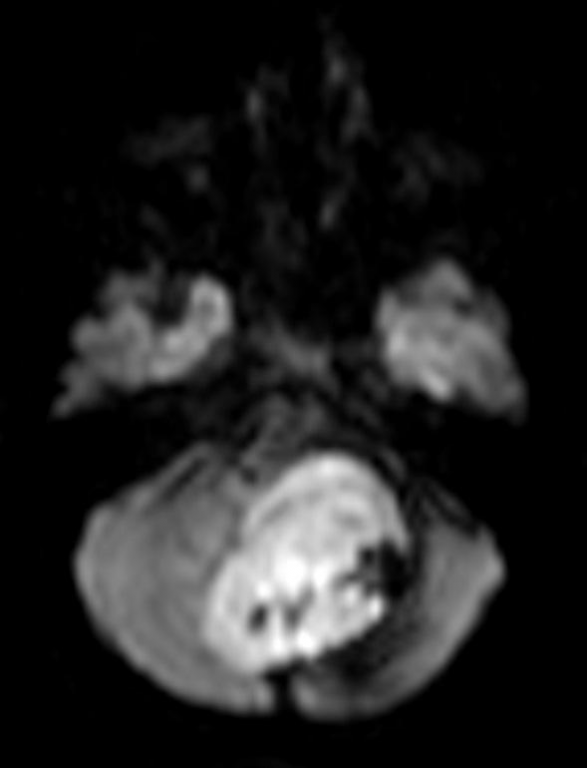 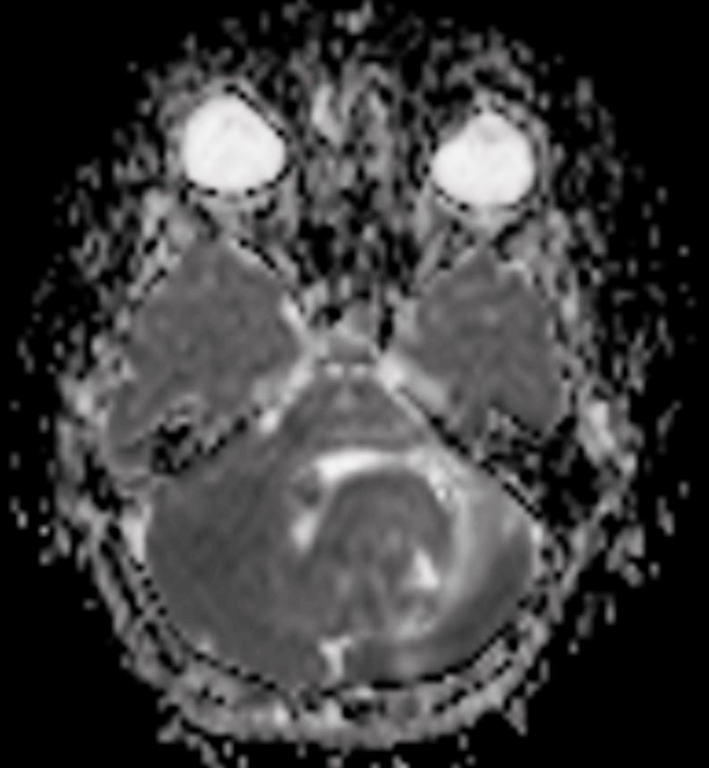 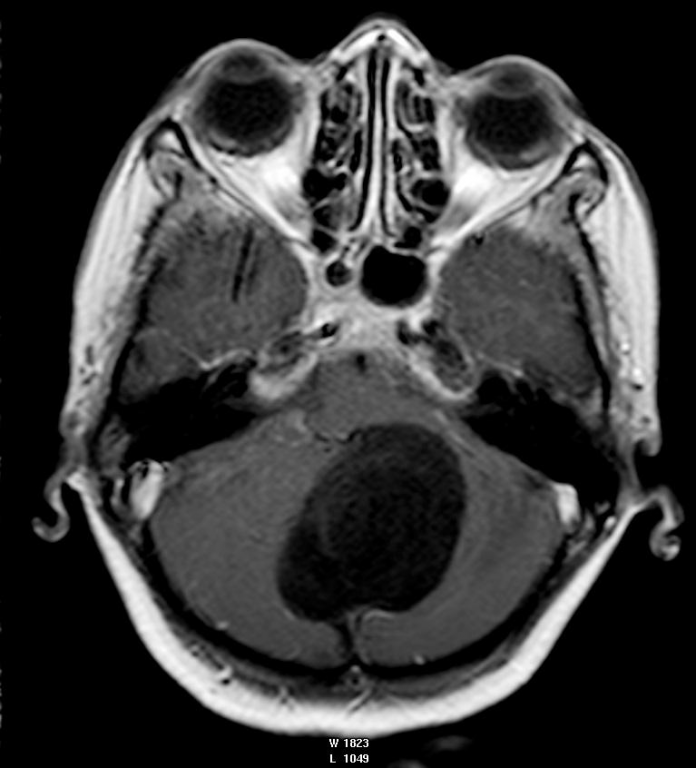 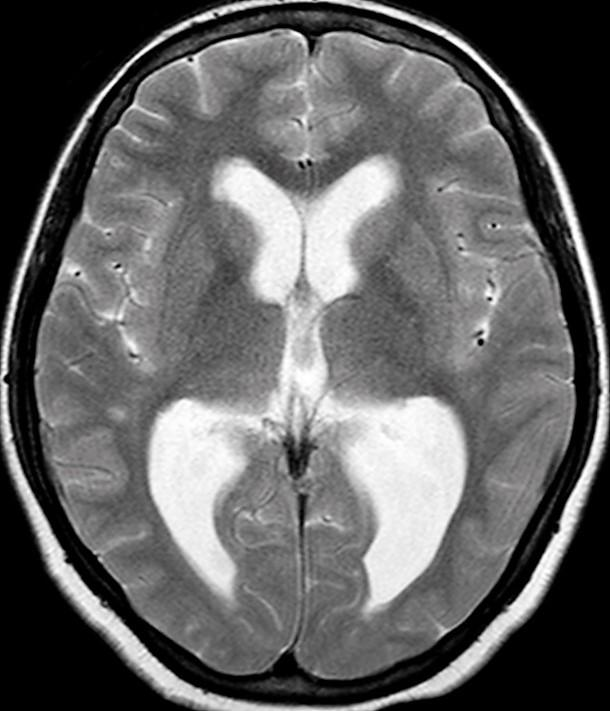 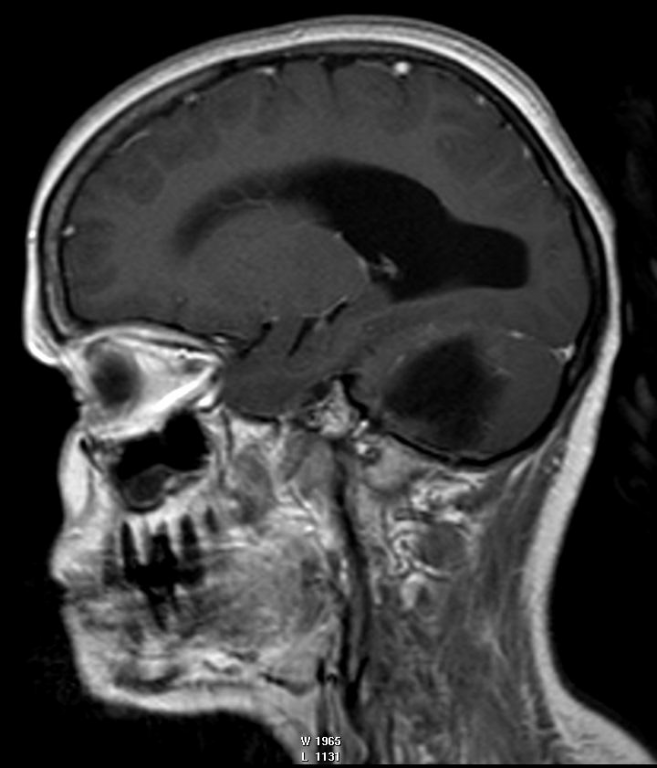 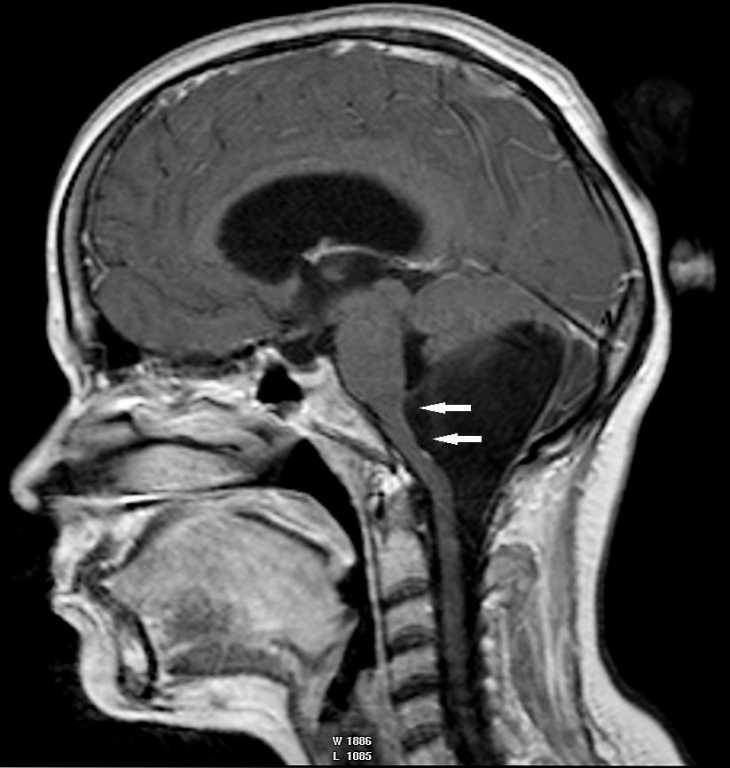