Categories
Area of Interest Neuroradiology brain ; Imaging Technique CT
Procedure Decision analysis ; Special Focus Drugs / Reactions ;
Show more Show less
Download as PDF Print Show related cases Notify admin
Clinical History
A 48-year-old woman rescued from a burning building with soot-covered face and with cardiac arrest was moved to the critical care unit. She was not responding successfully after 16 hours of medical care, so a head CT was performed. She was declared brain-dead 24 hours later.
Imaging Findings
Non-contrast head CT showed bilateral basal ganglia low density (lenticular nucleus, head of the caudate nucleus and thalamus) and diffuse hypo-attenuation of grey matter in cerebral cortex with relative preservation of white matter. As additional findings effacement of cerebral sulci, obliteration of the fourth ventricle and the suprasellar cistern where found.
Discussion
Carbon monoxide (CO) competes with oxygen for haemoglobin; but, as it has about 250 times more affinity, it displaces oxygen from haemoglobin, resulting in a tissue hypoxia-anoxia [1, 2]. Regarding poisoning, the organ most affected is the brain [3], leading to an anoxic-ischaemic encephalopathy [1, 2].

CO is the toxic that appears most frequently as the cause of death by poisoning after illegal drug overdose [1, 2].

CO poisoning most commonly begins with headache, dizziness, fast breathing, fast heartbeat, chest pain, altered conscious state, seizures, and when cardiac arrest overcomes unconsciousness and coma [2]. Clinical findings are not specific, neither for the type of toxic nor for guiding us on if the patient’s condition is due to a poisoning [2]; therefore, the context in which intoxication occurs becomes an important clue to guide us. Carbon monoxide may appear in incomplete combustion settings such as fire and car exhaust with inadequate ventilation [2].

Head CT without contrast can be another key in inquiring the responsible toxic, or at least in orientating the requesting physician that a patient’s current condition can be attributed to intoxication, especially because brain injury happens very early in this poisoning’s physiopathology. As key findings related to CO we can find: symmetric hypodensity of the lenticular nucleus, low density of other basal ganglia, thalamus, brainstem, and cerebellum and diffuse brain gyrus hypo-attenuation. In later phases it may lead to diffuse brain atrophy [1, 3]. These signs may be overlapped with those of hypoxic-ischemic brain injury, especially diffuse cerebral swelling with effacement of sulci and other CSF-containing spaces [4], which actually can be the very first ones appearing on CT. 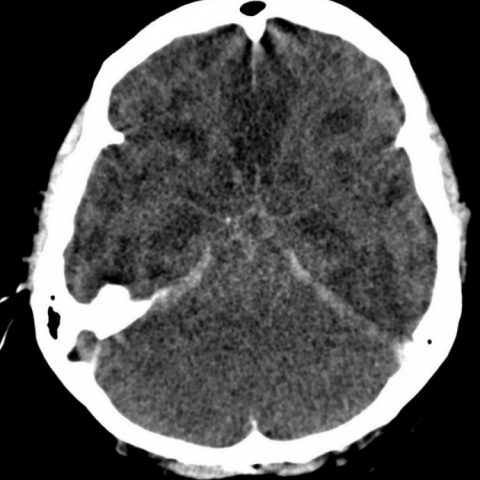 Diffuse hypoattenuation of gray matter in cerebral cortex and effacement of cerebral sulci, obliteration of the fourth ventricle and the basal cisterns.
Figure 2 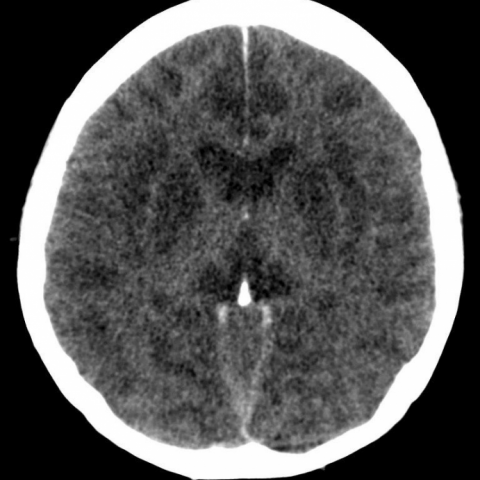 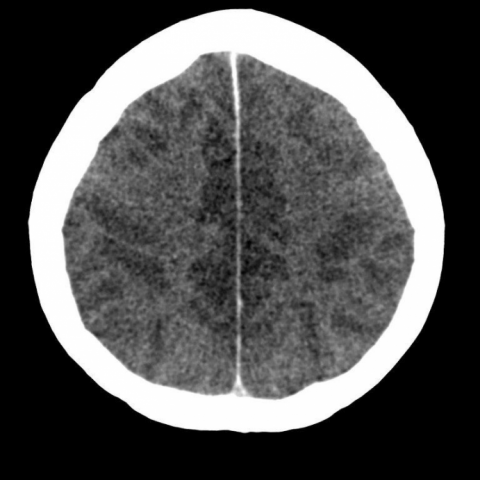 Diffuse hypoattenuation of gray matter in cerebral cortex with relative preservation of white matter and effacement of cerebral sulci. 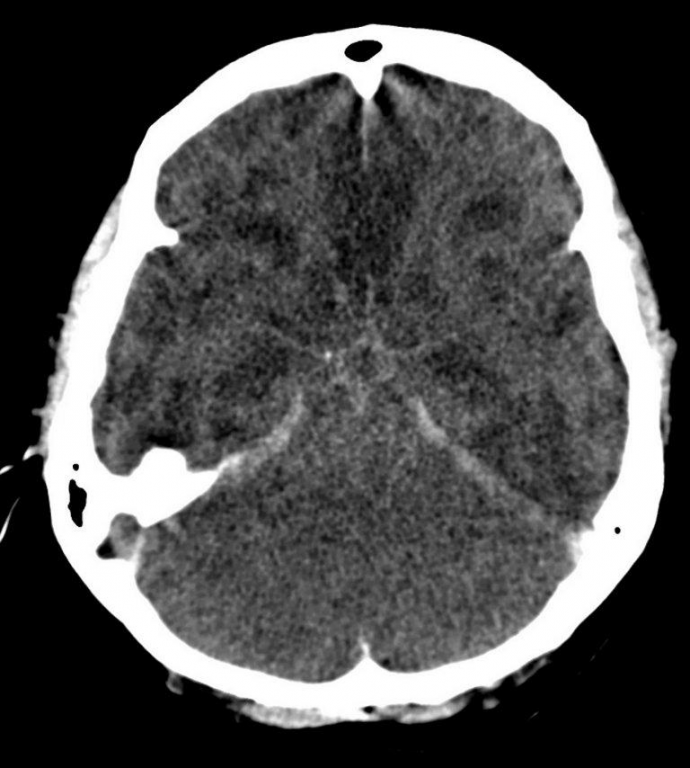 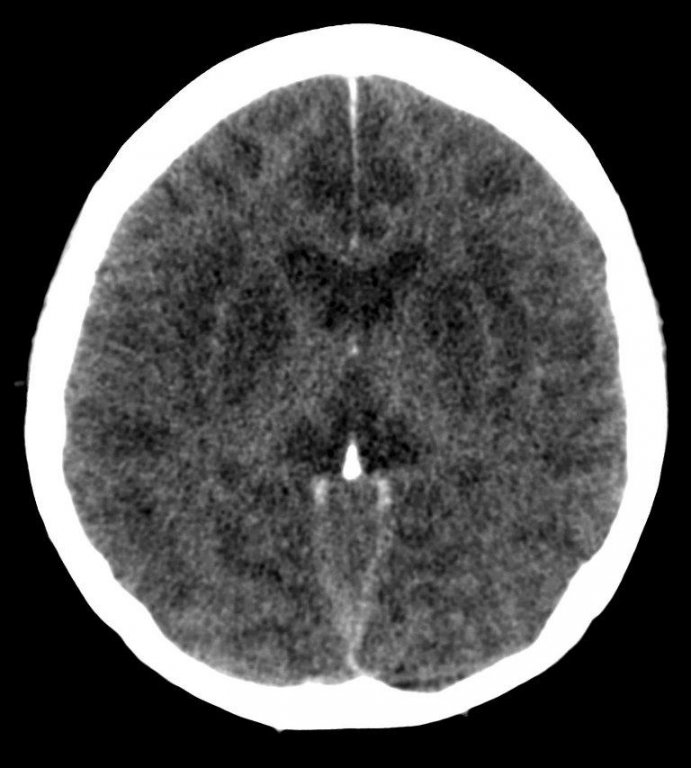 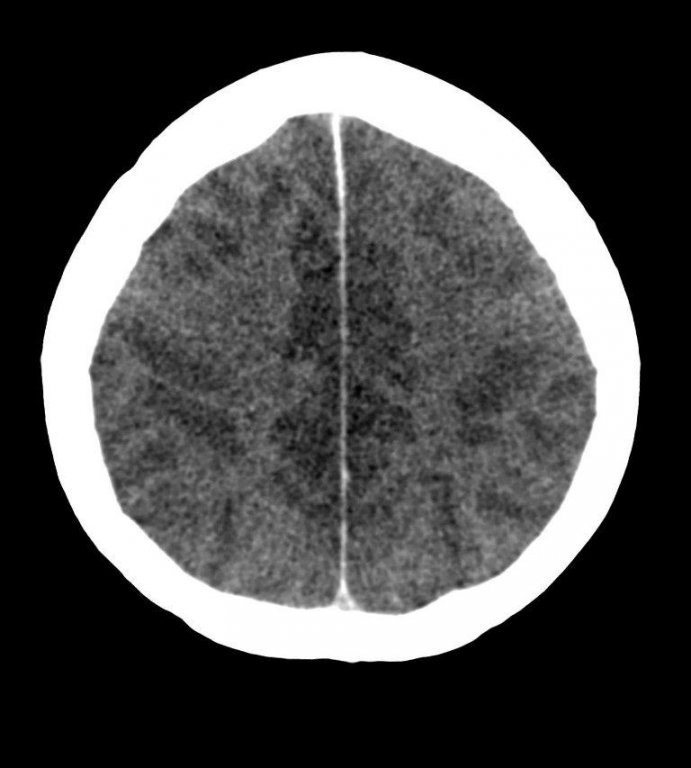