Categories
Area of Interest Veins / Vena cava, Liver, Adrenals, Kidney, Biliary Tract / Gallbladder, Colon ; Imaging Technique CT
Procedure Computer Applications-Detection, diagnosis ; Special Focus Haemodynamics / Flow dynamics, Ischaemia / Infarction, Acute, Dilatation, Haematologic diseases ;
Show more Show less
Download as PDF Print Show related cases Notify admin
Clinical History
Seventy-two-year-old woman S/P pancreaticoduodenectomy due to a biliary tract tumour, complicated with postoperative biliary fistula, presented 3 hours after surgery with hypotension (MAP 75-80 mmHg), decreased urinary output and a distended abdomen.
Blood tests revealed a decreased serum haemoglobin, lactates 23mmol/L, C-reactive protein 119mg/L, leukocytosis and neutrophilia.
Imaging Findings
Given the context, after hemodynamic stability the patient underwent abdominal and pelvic CT before and after intravenous (IV) iodinated contrast administration, which revealed multiple areas of hypoperfusion of the liver parenchyma (Fig. 1), increased symmetrical adrenal glands enhancement (Fig. 2), a prolonged intense renal parenchymal enhancement (Fig. 3), flattening of inferior vena cava (IVC) (Fig. 4), retrograde opacification of the hepatic veins and of the entire vena cava axis in the arterial phase (Fig. 5). There were no changes in the perfusion of the mesenteric arteries.
There were some additional findings: a moderate amount of loculated ascites (Fig. 5), aerobilia in intrahepatic bile ducts, predominantly at the left lobe (Fig. 6), gaseous distension of the colon without significant wall thickening related to ischaemic bowel (Fig. 7) and no demonstrable mechanical cause. Subtotal pancreatectomy. The patient received oxygen therapy, blood transfusions and inotropic treatment, but died within less than 48 hours.
Discussion
Hypoperfusion (shock) is the inadequate perfusion of body tissues [1], resulting in inadequate supply of oxygen and nutrients. The main symptom is low blood pressure. Shock is a life-threatening medical condition and a medical emergency. [2] It can be hypovolaemic, neurogenic, anaphylactic, septic or cardiogenic.
Hypovolaemic shock is common and occurs when blood or plasma is lost in such quantities that the remaining blood cannot fill the circulatory system despite constriction of the blood vessels. The blood loss may be external or internal.
In cases of hypovolaemia with development of hypovolaemic shock, patients typically present with signs of hypoperfusion, including low blood pressure (systolic <90 mmHg), weak and rapid peripheral pulses and increased capillary refill time, cyanotic extremities and decreased urine output. Patients can also present with tachypnoea and hyperventilation.
The treatment requires replacement of the lost blood volume.
Although CT is not enough to make the diagnosis of this condition, which is essentially clinical, this imaging method is of utmost importance not only in guiding the clinician to the seriousness of the situation, in particular by identifying possible related complications, but also in the exclusion of other differential diagnoses, thus contributing to a better prognosis and therapeutic approach.
CT findings tend to be reversible with appropriate fluid management, although severe hypotension and shock have a significant mortality rate.
In the evaluation of patients with hypovolaemic shock there are typical signs that can appear on CT and that can be both vascular and visceral:
Vascular manifestations include the flattening of IVC (AP diameter <9mm measured at the intrahepatic level, at the renal arteries level and 2 cm below them); halo sign (-20HU surrounding the intrahepatic IVC), small calibre aorta (<13mm measured 2 cm above and at the renal artery's origin). [3, 4, 5]
There is protection of vital organs, particularly by stimulating the sympathetic nervous system, to the detriment of other organs, namely low splenic enhancement associated with increased enhancement of adrenal glands [6], kidney's parenchyma or gallbladder mucosa and abnormal liver enhancement. It can also have some degree of bowel involvement with increased small bowel mucosal enhancement and mural thickening (>3mm). [3, 5]
In this context, we could also consider hepatic infarction as the cause of the defined hypodensities seen in the liver parenchyma. So, the radiologist must keep in mind that signs of hypoperfusion in CT are nonspecific, but when combined with the patient's clinical context are highly suggestive and can guide to the presence of hypovolaemia.
Differential Diagnosis List
Hypoperfusion due to postoperative hypovolaemic shock
Hepatic infarction
Acute adrenal haemorrhage
Final Diagnosis
Hypoperfusion due to postoperative hypovolaemic shock
References 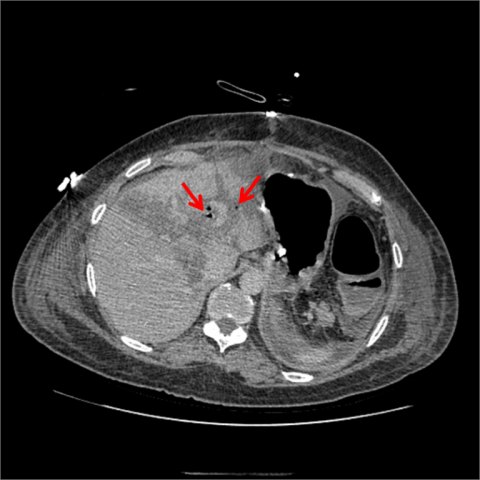 Axial CT acquisition after IV contrast administration depicts the presence of gaseous bubbles in the intrahepatic bile ducts due to aerobilia (arrows).
Figure 2 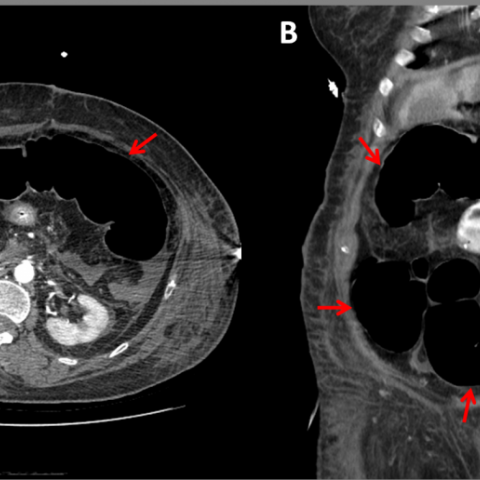 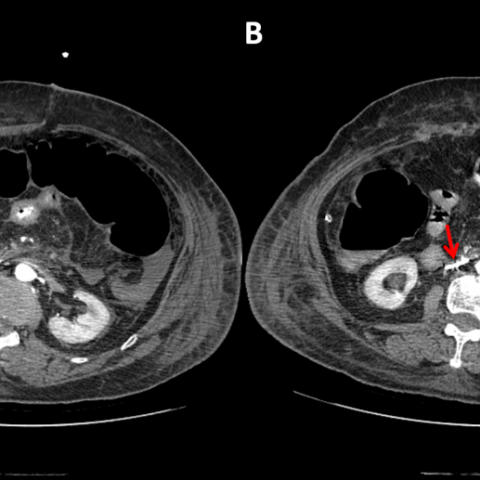 Axial CT acquisitions after contrast administration demonstrating a flattening of the inferior vena cava that has a caliber of only 4 mm at the renal arteries level (A) and 3 mm measured 2 cm below them (B).
Figure 4 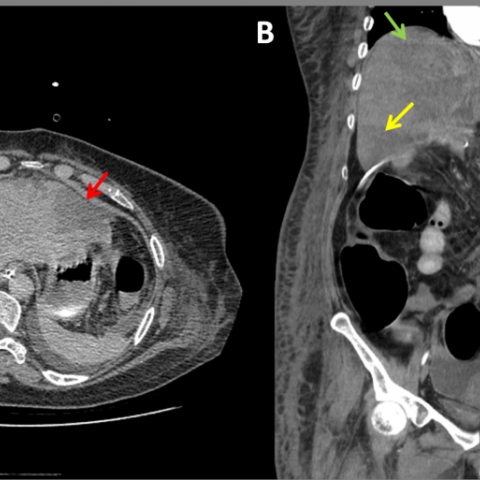 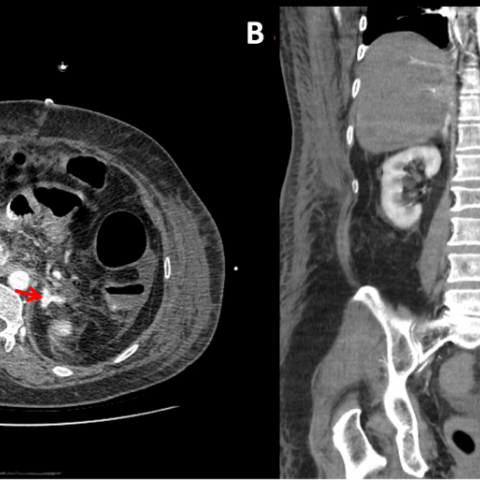 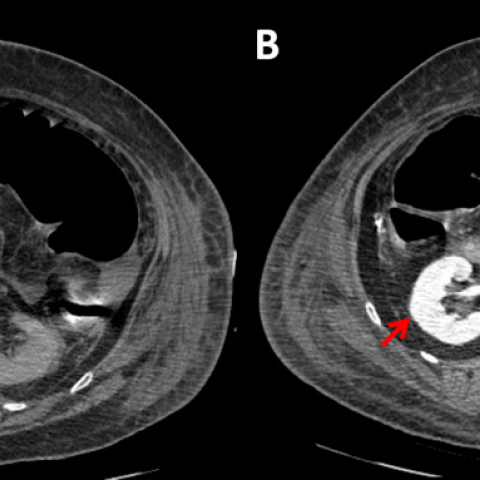 Axial CT reformations before (A) and after (B) IV iodinated contrast administration depicting an increased enhancement of renal parenchyma (arrows).
Figure 7 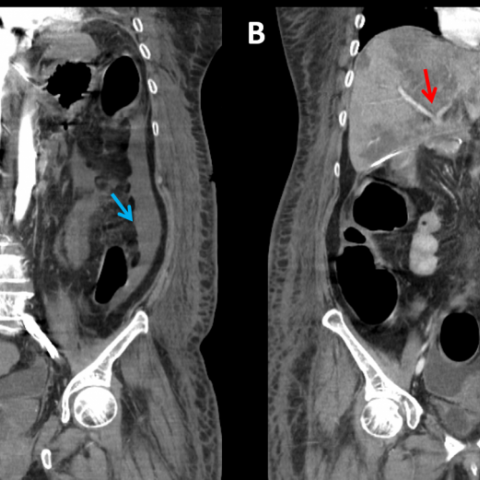 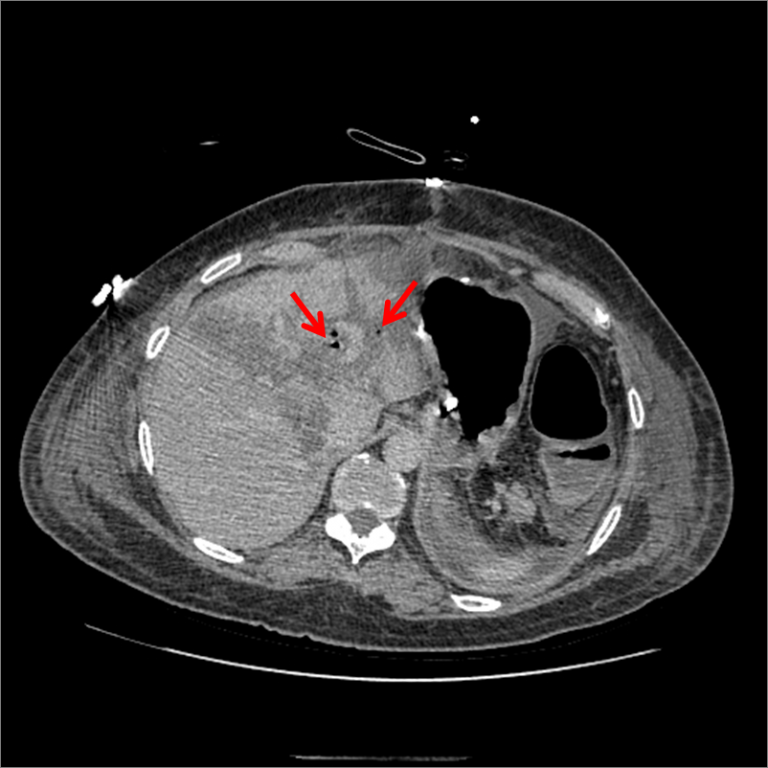 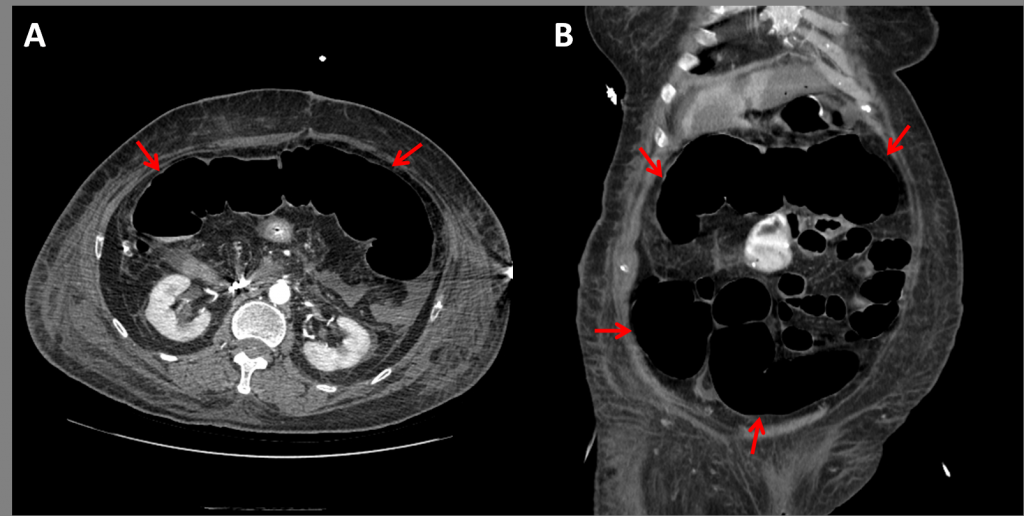 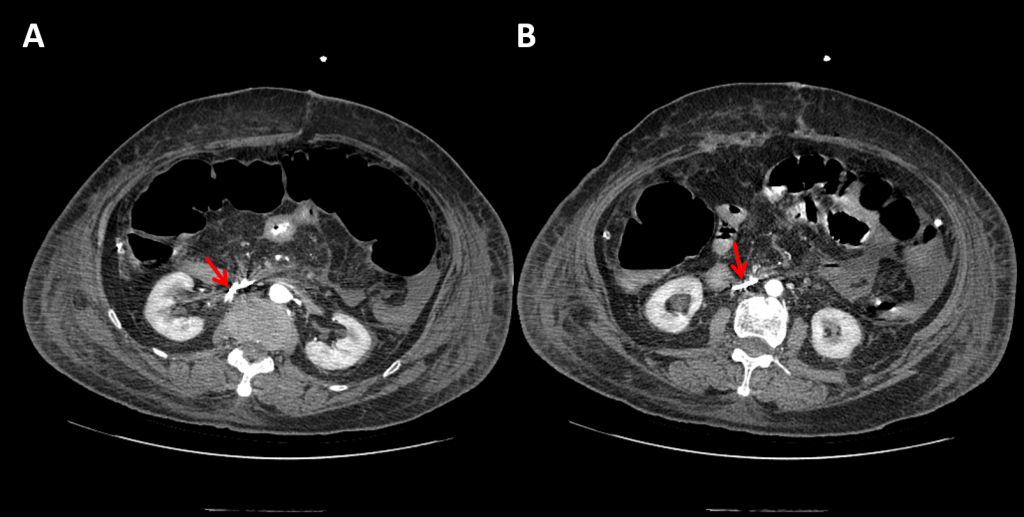 Axial CT acquisitions after contrast administration demonstrating a flattening of the inferior vena cava that has a caliber of only 4 mm at the renal arteries level (A) and 3 mm measured 2 cm below them (B).
Department of Radiology, Centro Hospitalar de Lisboa Central, Lisboa, Portugal. 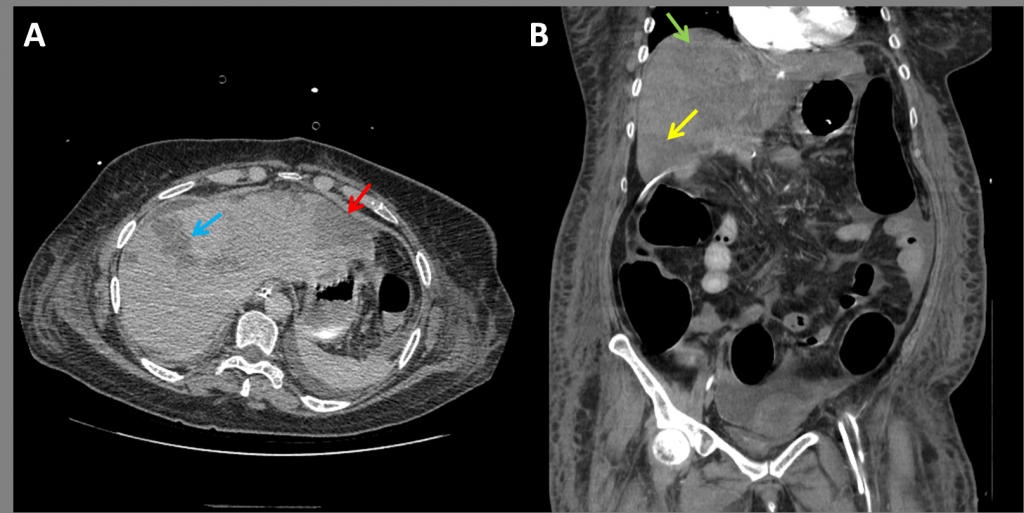 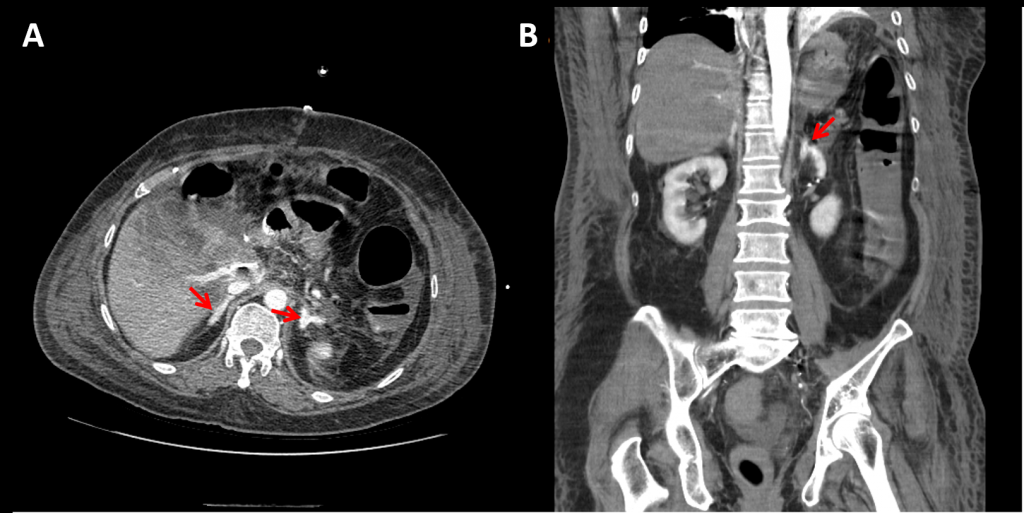 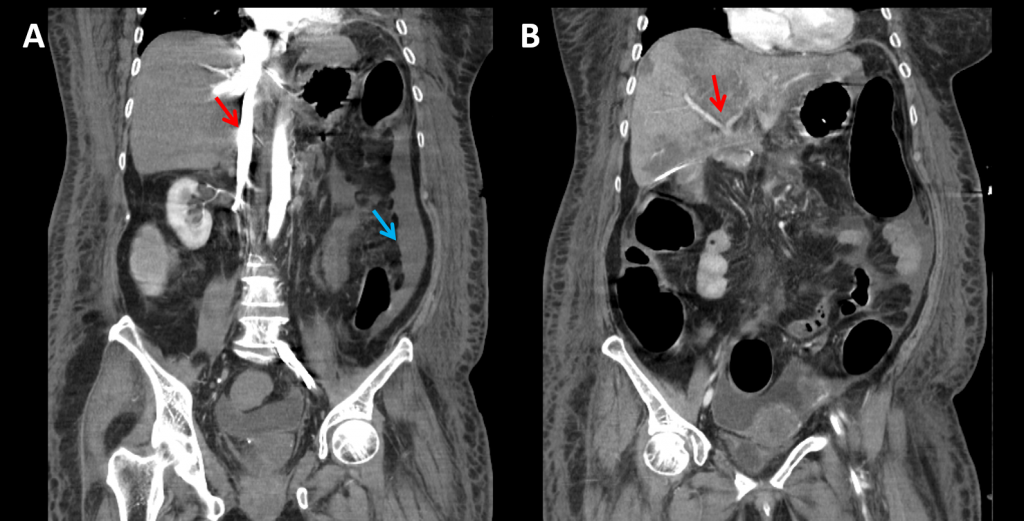