Categories
Area of Interest Neuroradiology brain ; Imaging Technique MR
Procedure Computer Applications-General ; Special Focus Cysts ;
Show more Show less
Download as PDF Print Show related cases Notify admin
Clinical History
A 28-year-old male patient came with a history of headache, altered sensorium, difficulty in walking and abnormal movements for 3 years. On examination, there was a decreased bulk of muscles and power bilaterally in the lower limbs and the left upper limb.
Imaging Findings
MRI revealed hydrocephalus with multicystic lesion in the midbrain extending superiorly to the bilateral thalamus, inferiorly to the pons and inferior cerebellar peduncle with compression on aqueduct of sylvius and effacement of fourth ventricle. The signal intensity of the lesion on T1 and T2 weighted images was identical to that of cerebrospinal fluid [CSF] (Fig 1a, b c). No enhancement with contrast media (Fig 2), no evidence of perilesional oedema on FLAIR.
Discussion
Perivascular spaces (PVSs) or Virchow–Robin spaces in the brain are pial-lined interstitial fluid (ISF) filled structures surrounding the penetrating arteries and arterioles [1]. These spaces are 1 to 2 mm in diameter, round, oval, or curvilinear smooth-walled structures on magnetic resonance imaging (MRI) [1]. With advancing age, VR spaces are found with increasing frequency and larger apparent sizes [3].

Dilated VR spaces typically occur in three characteristic locations:
Type I VR spaces appear along the lenticulostriate arteries entering the basal ganglia through the anterior perforated substance. Type II VR spaces are found along the paths of the perforating medullary arteries as they enter the cortical gray matter over the high convexities and extend into the white matter. Type III VR spaces appear in the midbrain [3]

The postulated mechanisms underlying expanding VR spaces include increasing permeability of the arterial wall, disturbance of the drainage route of interstitial fluid due to cerebrospinal fluid [CSF] circulation in the cistern, spiral elongation of blood vessels, brain atrophy, gradual leaking of the interstitial fluid from the intracellular compartment, and fibrosis and obstruction of VR spaces along the length of arteries and consequent impedance of fluid flow [2].

Giant tumefactive PVSs are round to oval in shape with a smooth margin along the path of penetrating arteries, are isointense to CSF and show no enhancement with contrast media [1]. The most common location of giant tumefactive PVSs is the mesencephalothalamic region in the territory of the paramedian mesencephalothalamic artery. They occasionally cause obstructive hydrocephalus.
In cases with hydrocephalus, the purpose of the operation is to aid CSF diversion, while cyst drainage and fenestration is required to relieve any focal mass effect [1].

MRI is the only modality to identify the VR space, characterize the symptomatic and asymptomatic and differentiate other cystic lesions from VR space.

Gaint VR spaces are the benign condition which can be misinterpreted as a neoplasm. Hence a thorough knowledge about the characteristic anatomic locations of the VR space is essential to make a diagnosis. They have characteristic imaging features: round or oval, single or multilocular lesions that are isointense relative to CSF regardless of imaging sequences and do not enhance. Although they have associated mass effect, they should not be mistaken for neoplasm or other disease.
Differential Diagnosis List
Giant tumefactive Virchow Robin space
Cystic neoplasm
Arachnoid cyst
Final Diagnosis
Giant tumefactive Virchow Robin space
References 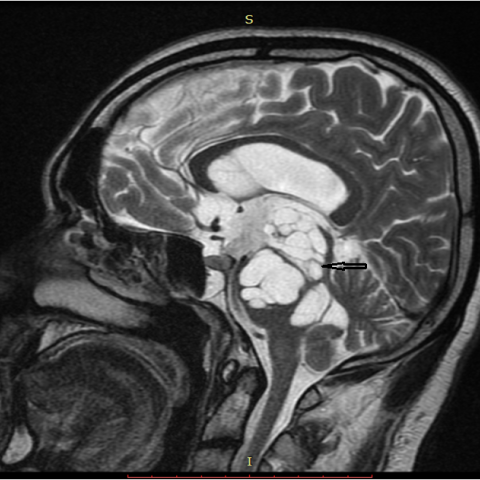 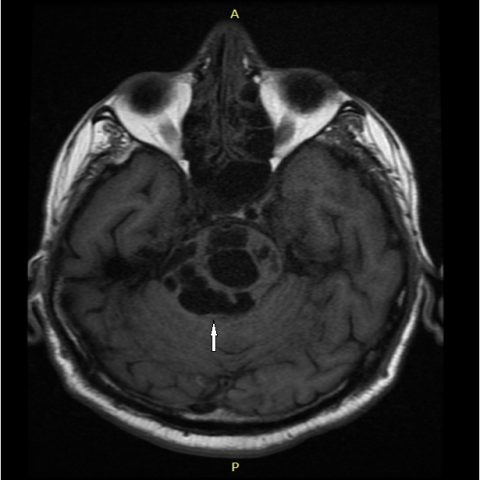 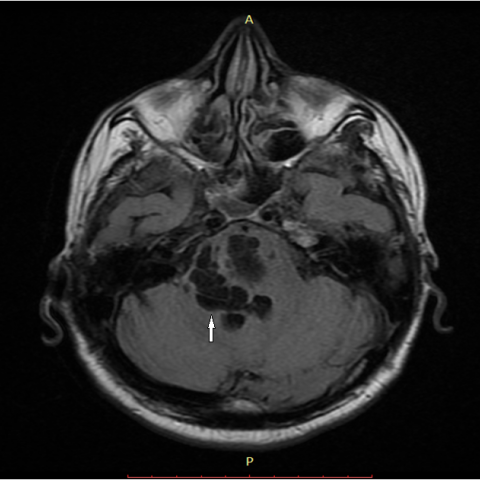 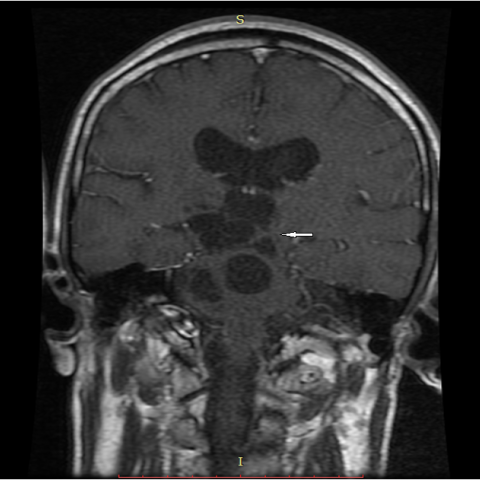 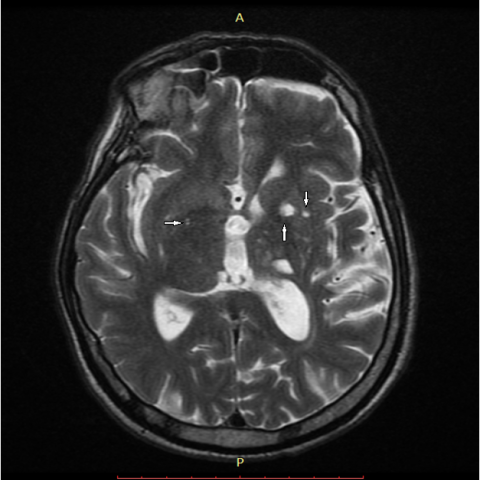 Axial T2 WI of a different patient who came with a history of headache showing Grade I (horizontal arrow), Grade II (downward vertical arrow) and Grade III (upward arrow) in the region of basal ganglia. 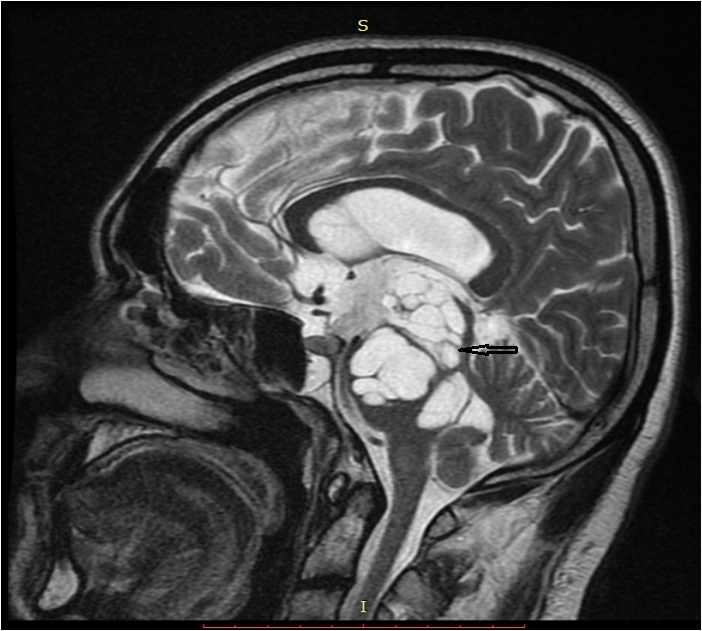 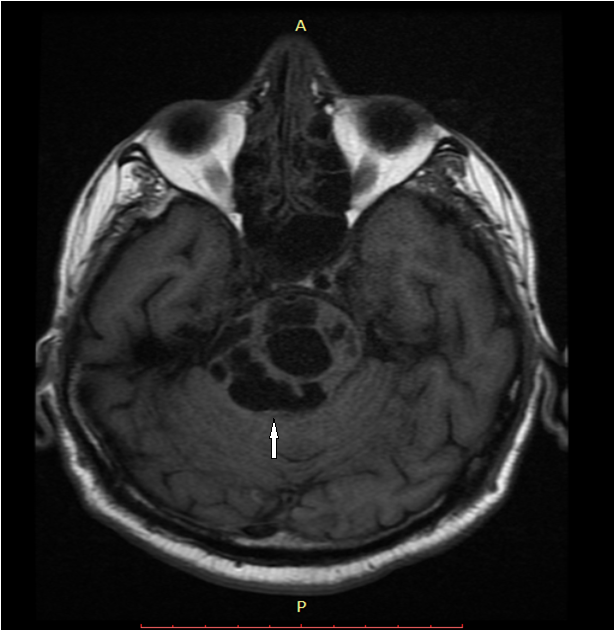 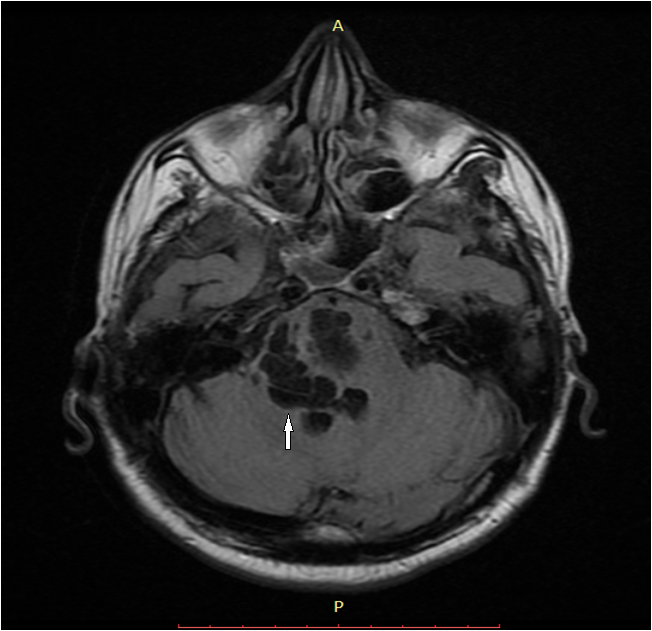 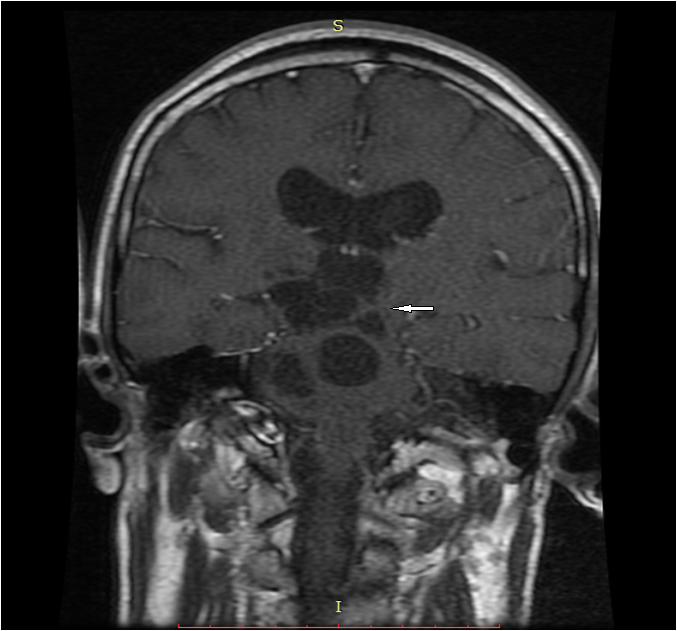 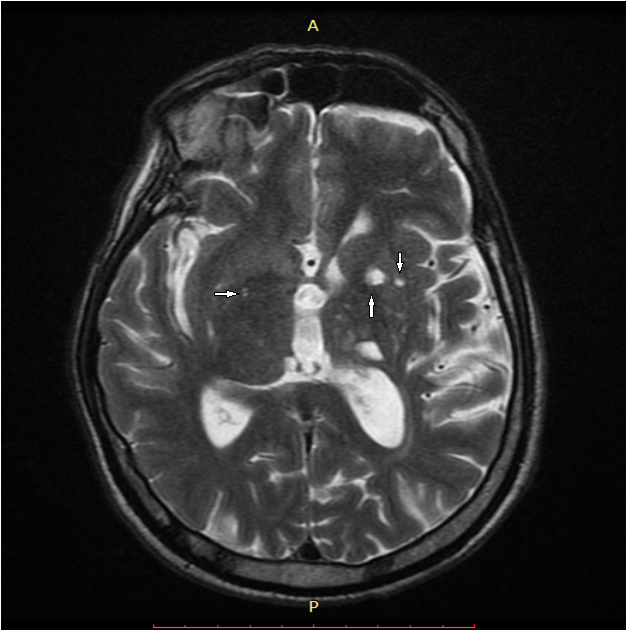