A female dancer with recurrent right foot pain: a case of talocalcaneal coalition

Categories
Area of Interest Musculoskeletal joint, Musculoskeletal system ; Imaging Technique MR
Procedure Imaging sequences ; Special Focus Congenital ;
Show more Show less
Download as PDF Print Show related cases Notify admin
Clinical History
An 18-year-old female dancer complained of recurrent right dorsal foot pain and stiffness, without history of trauma. Clinical examination revealed limited subtalar mobility.
Since the plain radiographs of the right foot (not available to view) were read as normal, the patient underwent magnetic resonance imaging (MRI) to define the cause of the symptoms.
Imaging Findings
MRI of the right foot revealed a talocalcaneal bridge that included the middle facet of the subtalar joint with continuity of the marrow signal intensity, indicating an osseous talocalcaneal coalition (Fig. 1, 2, 3). Short-inversion-time inversion recovery (STIR) images showed bone marrow oedema that involved the talocalcaneal bridge and the opposing surfaces of talus, calcaneus and medial malleolus (Fig. 3).
Discussion
Talocalcaneal coalition represents together with calcaneonavicular coalition the most common type of tarsal coalition, which is an abnormal fusion of two or more tarsal bones and has a prevalence in the general population of about 1% [1, 2].
This disease may have a congenital origin, consisting in failure of complete segmentation in the early stages of primitive mesenchyme with lack of normal joint formation [3].
Talocalcaneal coalition may be osseous, cartilaginous or fibrous and it usually involves the middle facet of the subtalar joint, at the level of the substentaculum tali [1]. Many authors report that a progressive osseous bridging occurs with increasing age, the reason why various histologic components may coexist [4].
A recent study introduces a new type of talocalcaneal coalition, in which an os sustentaculum is part of the extra-articular bridge between talus and calcaneus [5].
Talocalcaneal coalition is usually asymptomatic in early childhood; tarsal pain and stiffness appear during adolescence, with the increase in ossification, and are usually associated with physical activity [3]. A talocalcaneal coalition with os substentaculum may be suspected in all patients with an os substentaculum who complain of pain of the medial talocalcaneal joint area [5].
Imaging plays an important role in the detection of talocalcaneal coalition. The radiographic signs are: talar beak, narrowing of the posterior subtalar joint, rounding of the lateral talar process and “C sign”, seen on lateral radiographs, consisting of a C-shaped line that represents the bridge between talar dome and substentaculum tali [2]. Talocalcaneal coalitions may be difficult to detect on plain radiographs, so its diagnosis and characterization require computed tomography (CT) or MRI [4].
CT, offering multiplanar capability, is useful to define the size, location, and orientation of talocalcaneal coalitions and is able to identify an os substentaculum through the osseous bridge [4, 5]. However, CT is not recommended in young patients, because of the use of ionizing radiation.
MRI, using T1-weighted, fast spin-echo proton density–weighted, and fast spin-echo T2-weighted images, allows us to detect talocalcaneal coalition and to define its type: cartilaginous, fibrous and bony, with or without os substentaculum. Moreover, thanks to fluid-sensitive sequences, it’s easily possible to identify bone marrow oedema, which could be associated to talocalcaneal coalition [4, 5].
In cases with non-disabling symptoms the management of talocalcaneal coalition may be conservative, with orthoses, physical therapies and anti-inflammatory medications. If all conservative treatments fail, surgery may be indicated [3].
In our case the patient was conservatively treated, although her dancing career had to end too early.
Differential Diagnosis List
Talocalcaneal coalition
Flatfoot
Idiopathic skeletal hyperostosis
Final Diagnosis
Talocalcaneal coalition
References 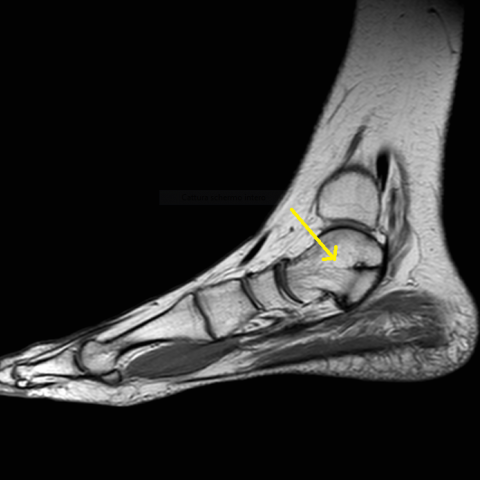 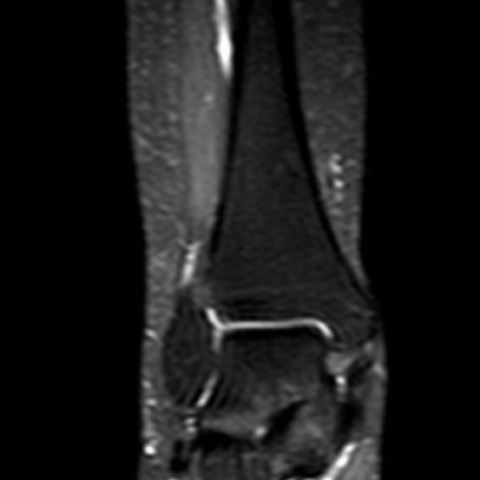 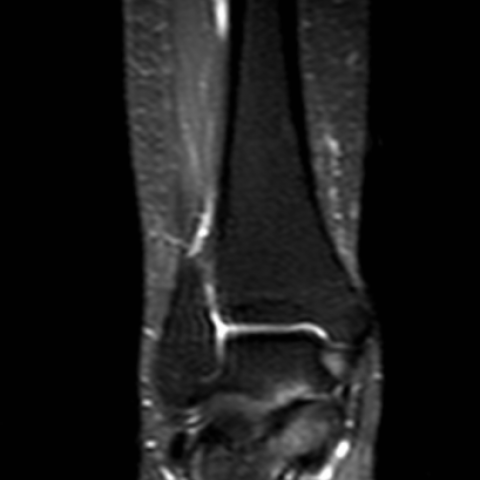 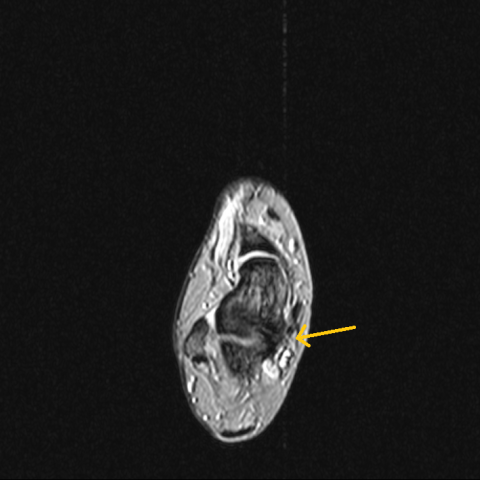 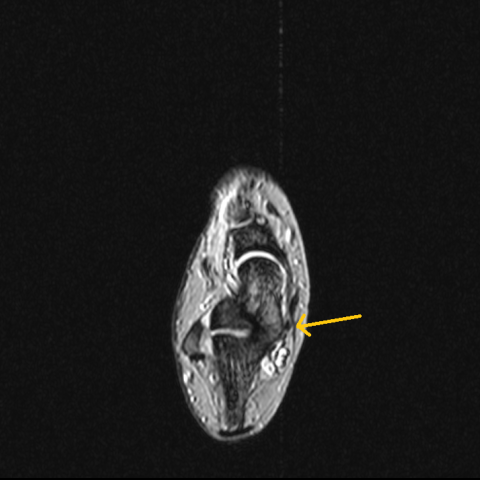 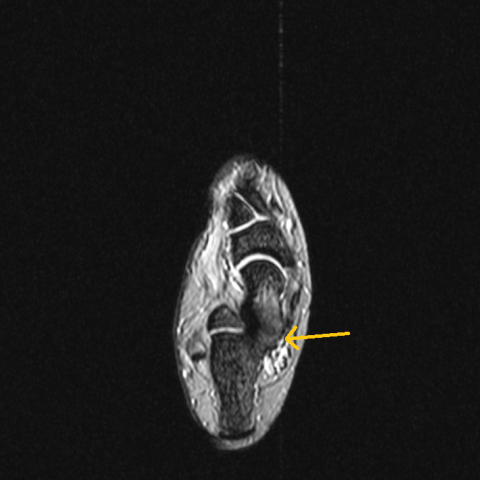 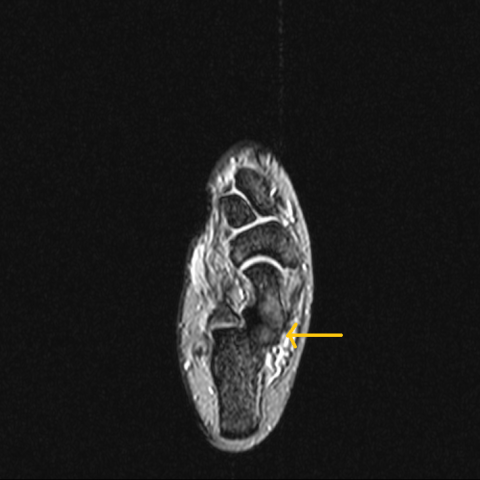 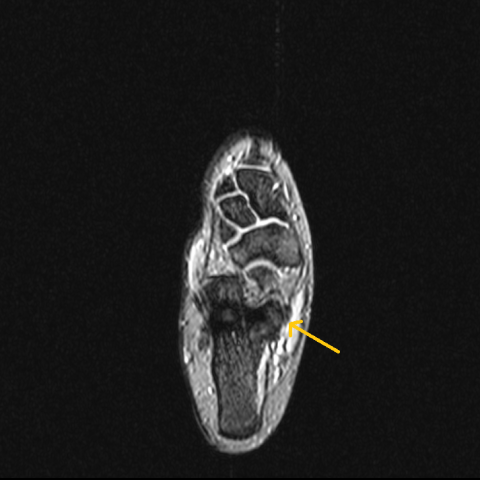 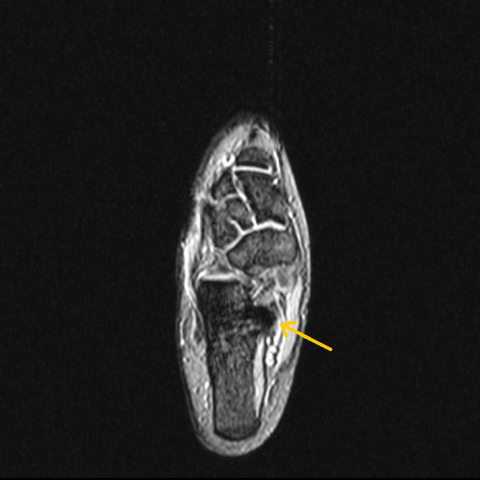 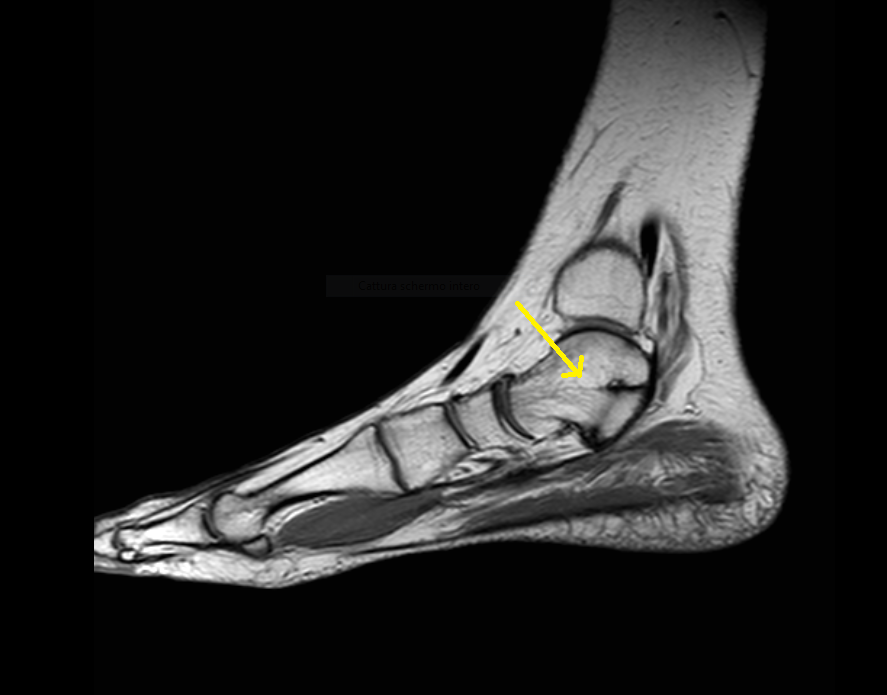 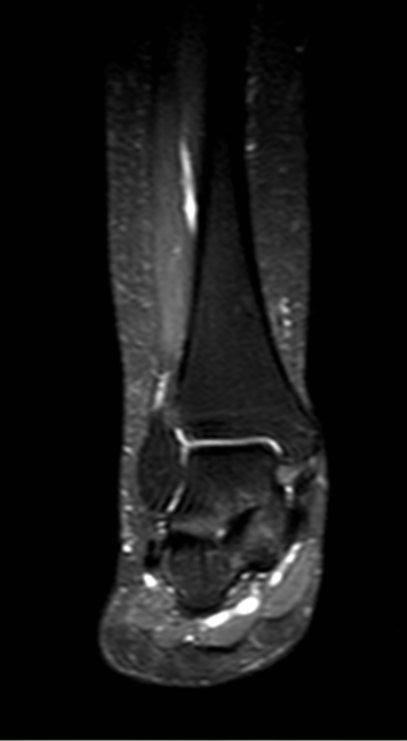 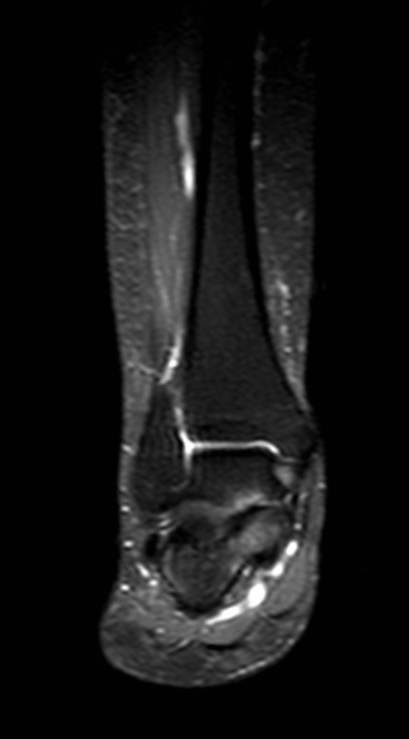 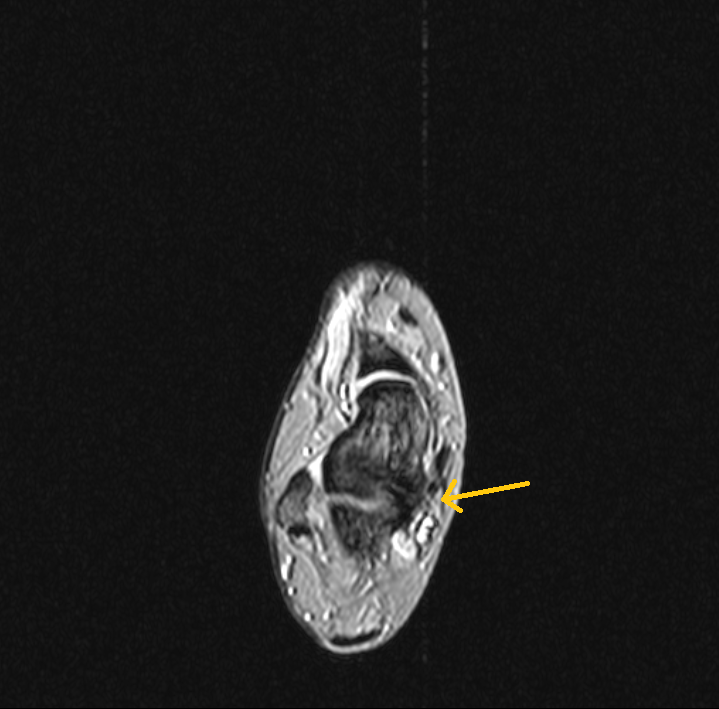 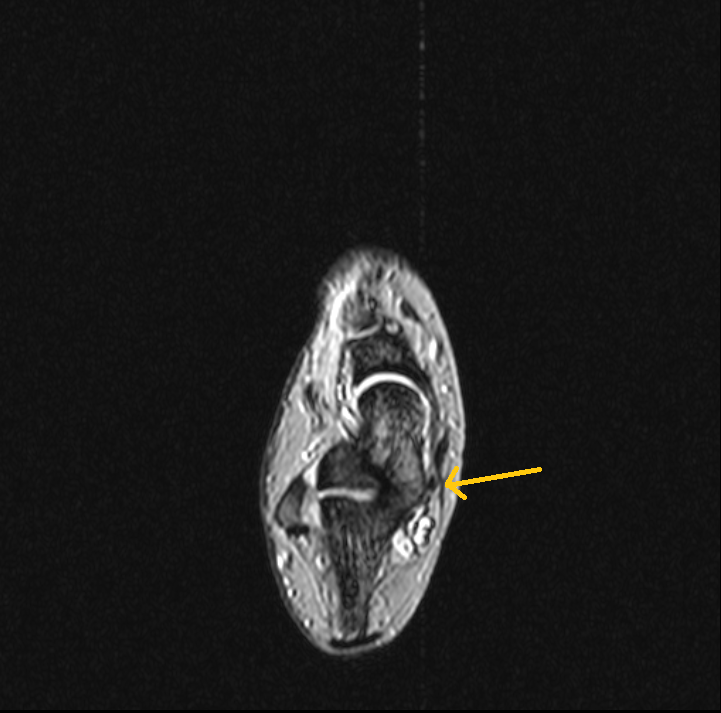 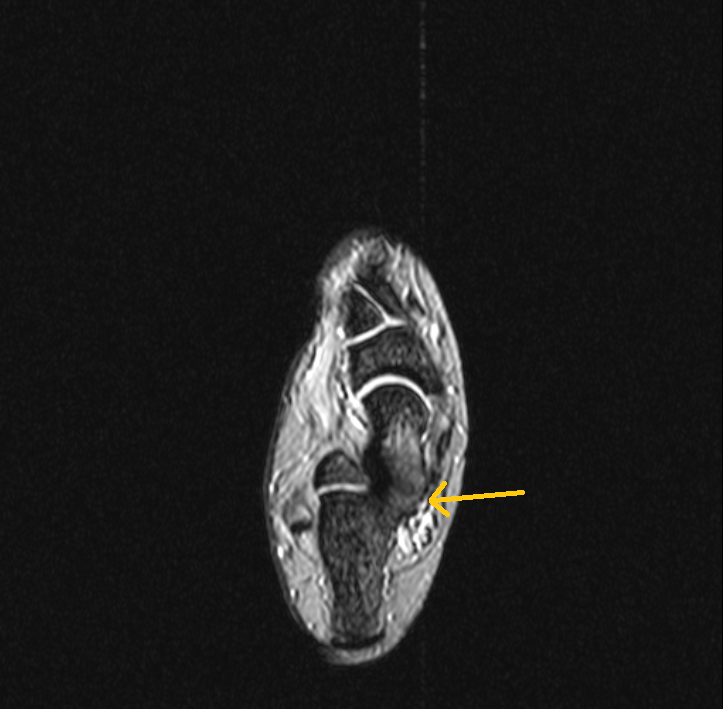 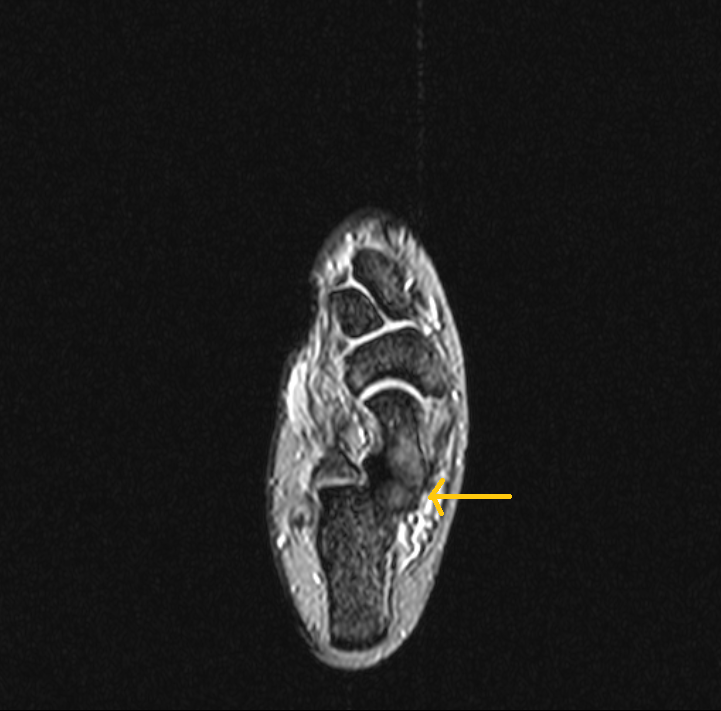 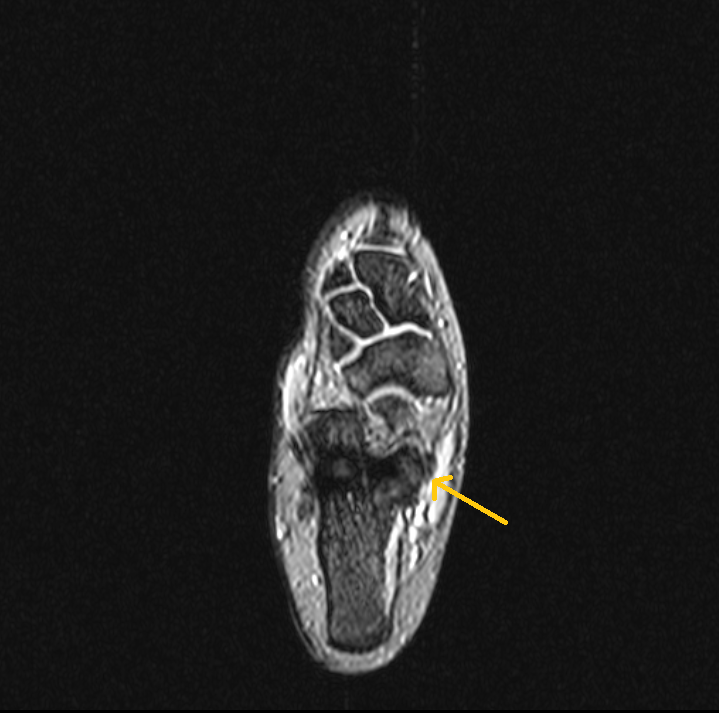 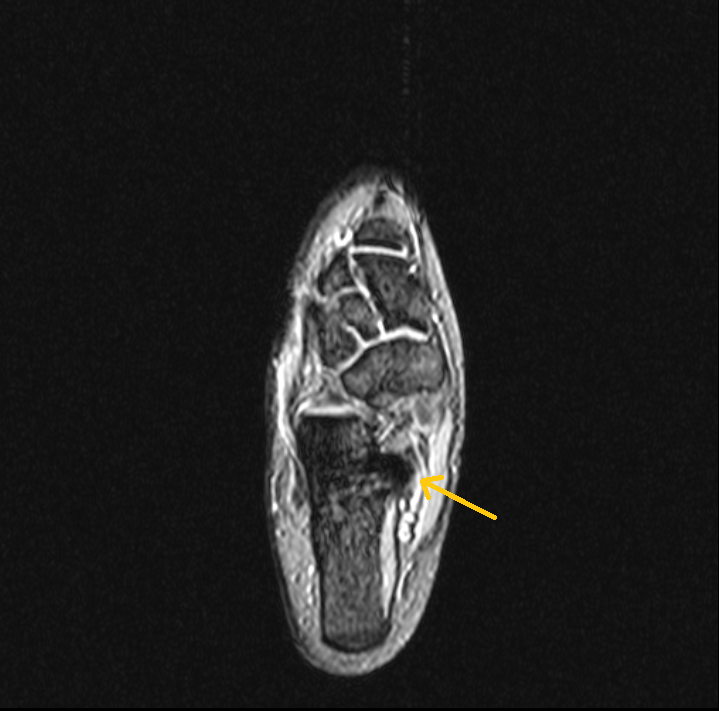