74-year-old woman who underwent surgery for lumbar arthodesis at L4 - S1, with L4 - L5 laminectomy, with dural tearing <1cm. The day after surgery she presented an episode of sudden headache, nausea and sudden decreased level of consciousness. Physical examination, Glasgow 5 and difficulty breathing.

A brain CT without contrast, CT angiography of supra-aortic trunks and CT late (spot sign) is performed, the latter acquired 5 min after the administration of CIV, in a 64-MDCT.
In CT without contrast important haematic content in bilateral folias cerebellar, predominantly on the right, intraventricular in fourth and third ventricle and liquid level in occipital horns of lateral ventricles, and extra-axial haemorrhage tentorium was observed. Herniation of 1 cm of both cerebellar tonsils (predominantly right) through the foramen magnum, and obliteration of pontocerebellar, prepontine, ambient and quadrigeminal cisterns, suggestive of transtentorial herniation. In CT angiography of supra-aortic trunks there were no findings of interest. In brain CT late, spot sign negative for active bleeding.

Remote cerebellar haemorrhage (RCH) is an unpredictable post-surgical complication which develops distant to the site of surgery, is rare but potentially lethal as a complication of supratentorial craniotomy or spinal surgery. Chadduck reported the first RCH case in 1981, which occurred after cervical laminectomy. [2]

The exact pathophysiology and aetiology are still unknown. There are several theories on the pathological mechanisms for RCH. Most theories are related to the involvement of the venous system, which can be supported by the following facts. First, haemorrhage is located in the upper vermis and cerebellar sulci, where the cerebellar draining veins are located. Second, almost all the cases of RCH were bilateral whereas arterial bleeding tended to be unilateral. Caudal sagging of cerebellum by rapid leak of large amount of CSF, giving rise to a transient occlusion or tearing of the upper bridging veins in the posterior fossa, which leads to the venous congestion that causes the haematoma, would be the pathomechanism leading to RCH after spinal surgery. [1, 2]
The most important predisposing factors are those related to the circulation of CSF (e.g. suction of the postoperative drainage, type of surgical approach, tearing of the dural sac in spinal surgery) and perioperative hypertension or use of hypotensive drugs during surgery. [1, 3, 4]

The most common presenting symptom of RCH is a decreased level of consciousness and headache. Other common symptoms include motor deficits, gait ataxia, and prolonged awakening from anaesthesia. Some cases are asymptomatic. [4, 5]

The finding seen on MRI or CT is described as the 'zebra sign', usually a pattern of linear bleeding between the cerebellar folia and vermis close to tentorium in the upper part of cerebellum, which shows the typical CT finding of alternating curvilinear hyperdense (blood) and hypodense (cerebellum). [1, 2, 5]

Small RCH seem to be self-limiting, can be managed medically. [4] However, large RCH with signs of brainstem compression must require immediate surgical decompression. The prognosis of RCH patients is usually favourable with mild and transient neurological dysfunction. [2] The patient's age and the amount of bleeding are the only prognostic factors identified. [5] 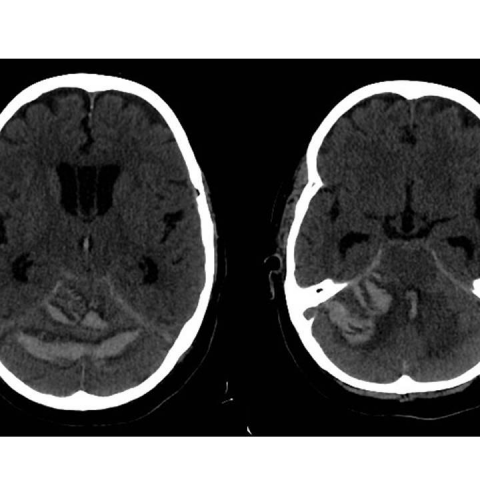 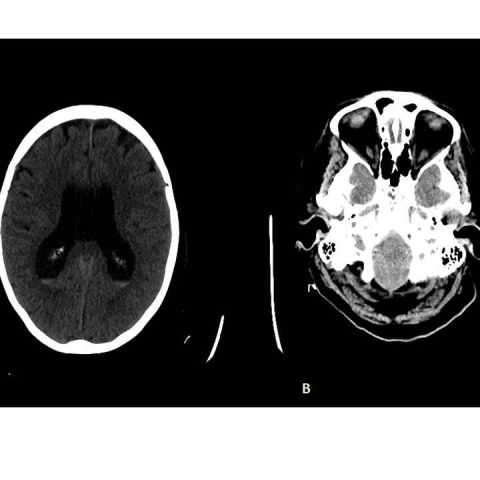 A. Liquid level in occipital horns of lateral ventricles is observed. B. Herniation of both cerebellar tonsils (predominantly right) through the foramen magnum.
Figure 3 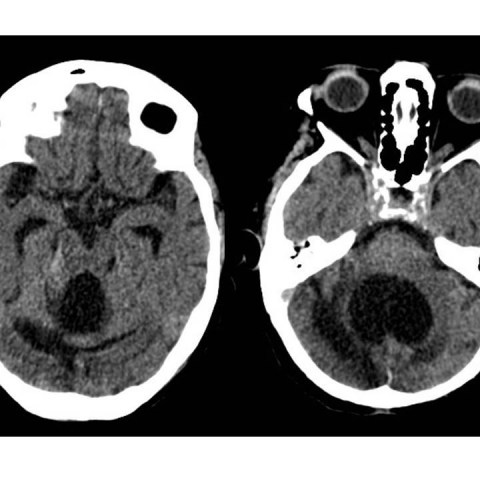 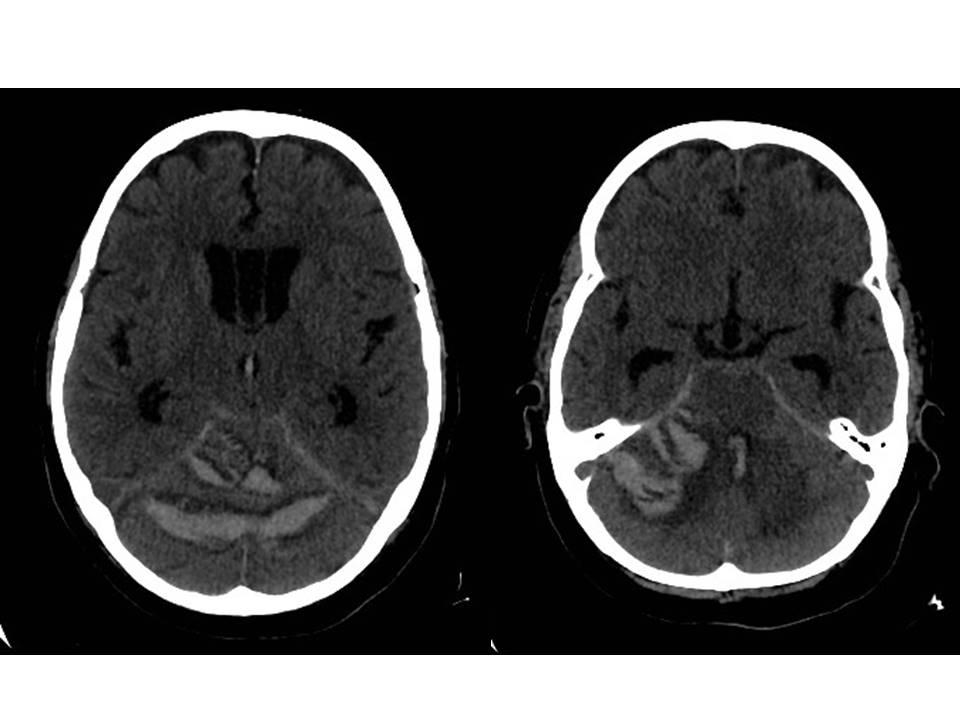 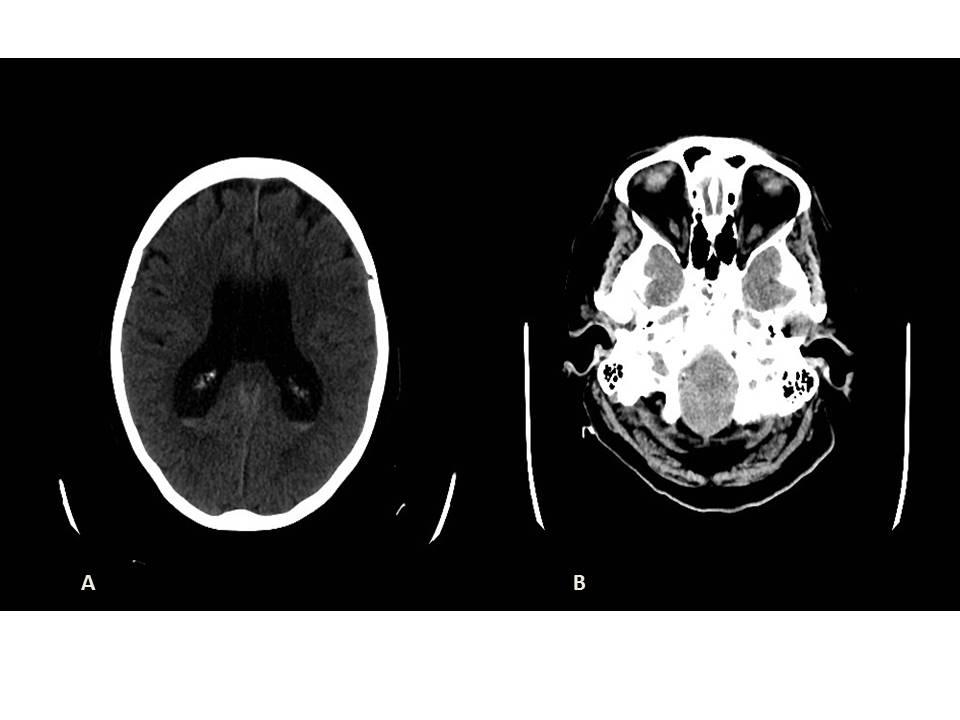 A. Liquid level in occipital horns of lateral ventricles is observed. B. Herniation of both cerebellar tonsils (predominantly right) through the foramen magnum.
Deparment of Radiology, Cruces University Hospital, Vizkaya - Spain. 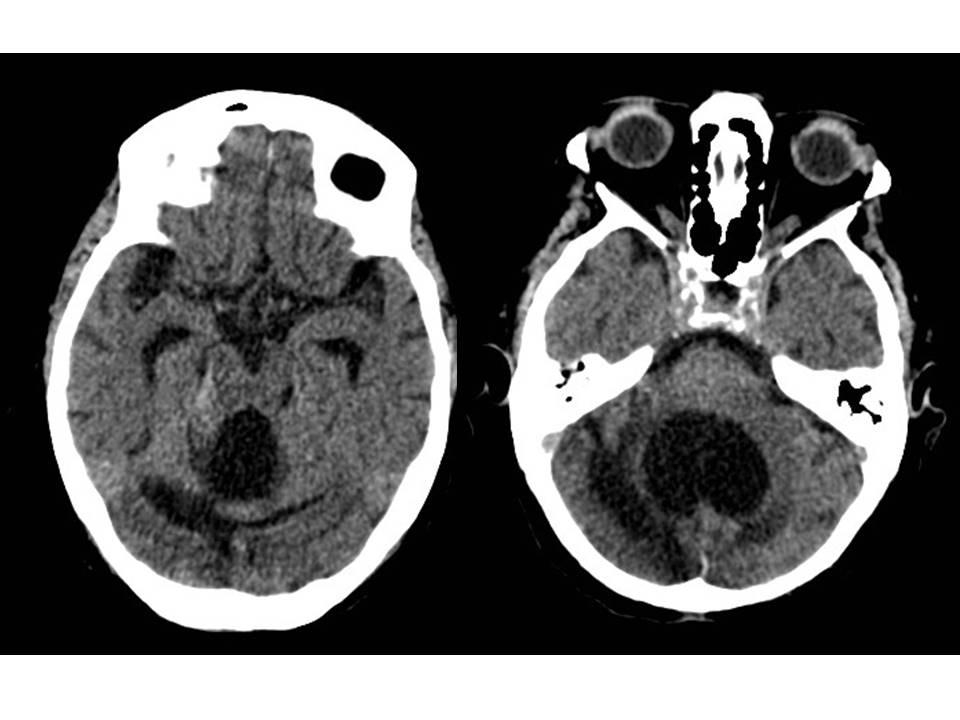