Categories
Area of Interest Neuroradiology brain ; Imaging Technique MR
Procedure Contrast agent-intravenous, Imaging sequences ; Special Focus Pathology, Oedema ;
Show more Show less
Download as PDF Print Show related cases Notify admin
Clinical History
A 77-year-old man was admitted to the hospital with tonic to clonic seizures after 2 months of worsening frontal headache. Apart from seizures and headache, the patient suffered from myelodysplastic syndrome, porphyria cutanea tarda, myxoedema and chronic heart disease.
Imaging Findings
Contrast-enhanced MRI of the cerebrum was performed with 10 ml Dotarem 0.5 mmol/ml. The images revealed localized thickening of the frontal dura, and strong contrast enhancement rostrally in the frontal aspect of the cerebral falx as well as parafalcine on the right side. Under the thickened dura in the right frontal lobe, a non-enhancing area of subcortical oedema causing no mass effect was present. No bony reaction was demonstrated. Biopsy of the affected area demonstrated chronic fibrosing inflammation of the dura with histiocytes, plasma cells and lymphocytes. No tumour cells or signs of specific inflammation were found, IgG4 histological tissue colouring was negative, and the cultures were sterile. The patient died 3 weeks after obtaining the brain biopsy due to comorbidity.
Discussion
Hypertrophic pachymeningitis is an extremely rare chronic inflammatory disease of pachymeninges [1, 2, 3], causing localized or diffuse thickening of the dura. It can be primary-idiopathic hypertrophic pachymeningitis (IHP), where the aetiopathogenesis is specifically unknown but assumed to be of an autoimmune origin, or secondary to an infectious or infiltrative disorder, such as rheumatoid arthritis, Wegener's granulomatosis, neurosarcoidosis, malignancy, or tuberculosis. [1, 4, 5, 6]
IHP shows a multitude of presentations, depending on the affected area of the dura mater and the underlying parynchyma. It mostly manifests with headache [6], loss of vision, cranial nerves palsies and rarely with seizures [4]. The sedimentation rate may be elevated, and the CSF is always sterile with non-specific elevated proteins or lymphocytosis, therefore neuroimaging is essential to suspect IHP, and to list the differential diagnoses. T2 weighted MR-sequences typically show a relatively hypointense signal of the affected thickened dura, which enhances markedly on T1 weighted contrast enhanced sequences. The presence of associated leptomeningeal (pial-arachnoid) enhancement or parenchymal lesions with the exception of brain oedema should lead to an alternative diagnosis. However, the definitive pathological definition of the disease would only be achieved with histological biopsy. [5]
The therapeutic options are directed towards the chronic inflammatory nature of the disease, and the standard treatment is corticosteroids and immunosuppressive agents to counteract the morbidity of the disease. However, the response to the treatment is variable. It ranges from complete recovery to disease progression despite the treatment. Difficult symptoms control leads often to the dependence on high doses of steroids and the need for the addition of immunosuppressive drugs. Nevertheless the risk of rebound is always present with tapering of the steroids. [4] Surgical resection of the dural mass can be offered for symptom relief. MRI follow-up is still controversial because the clinical status is not always correlated to the size of the dural lesion. [1]
The nature of the disease, the prognosis, and the efficacy of treatment is not well defined in the literature due to of the extreme rarity of the disease. Therefore more studies need to be undertaken for better understanding of IHP.
Differential Diagnosis List
Idiopathic hyperatrophic pachymeningitis.
Metastasis
Lymphoma
Meningioma [1]
Hyperatrophic pachymeningitis secondary to infectious infiltration such as tuberculosis or syphilis
IGg4-related hyperatrophic pachymeningitis [3]
Final Diagnosis
Idiopathic hyperatrophic pachymeningitis.
References 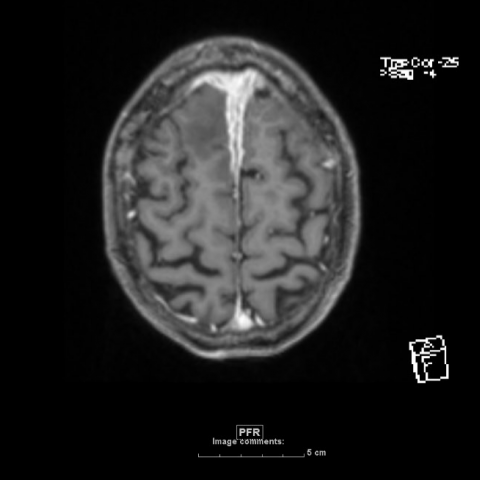 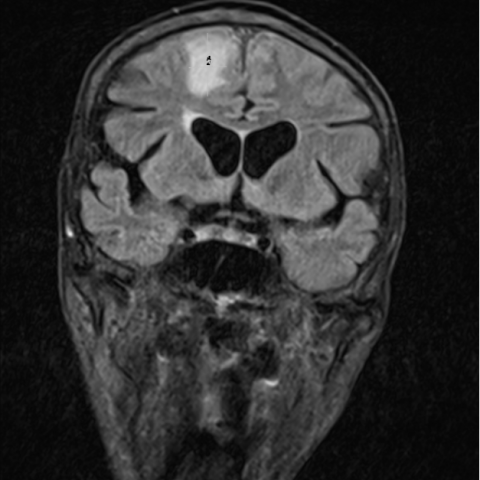 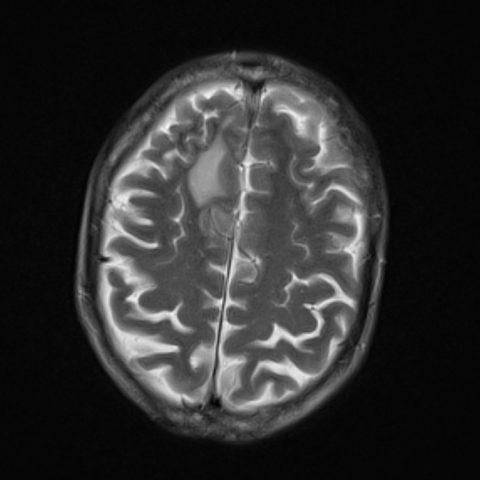 MRI of the cerebrum T2-axial sequence. 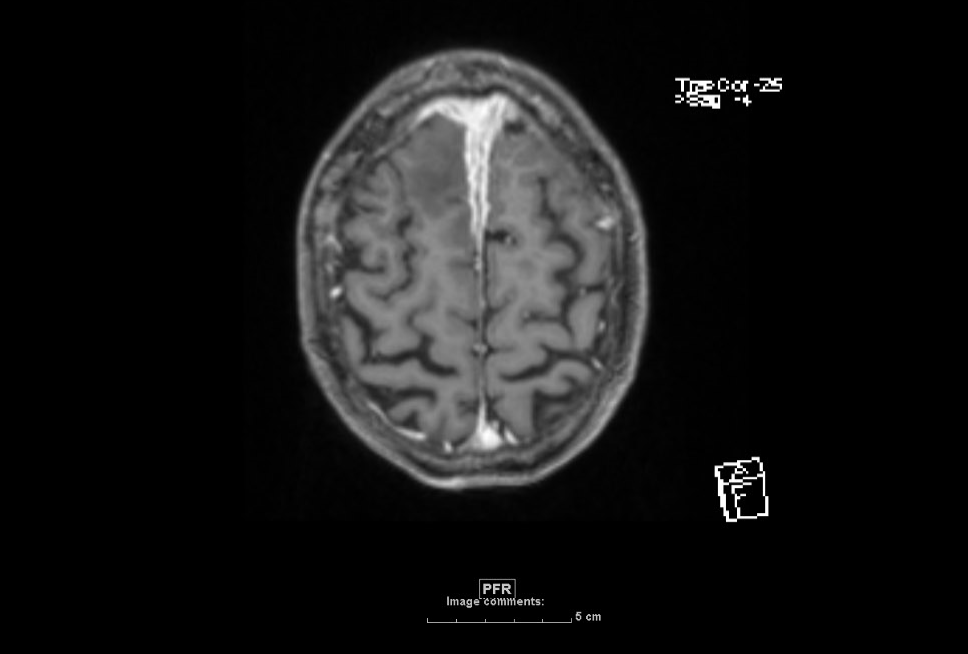 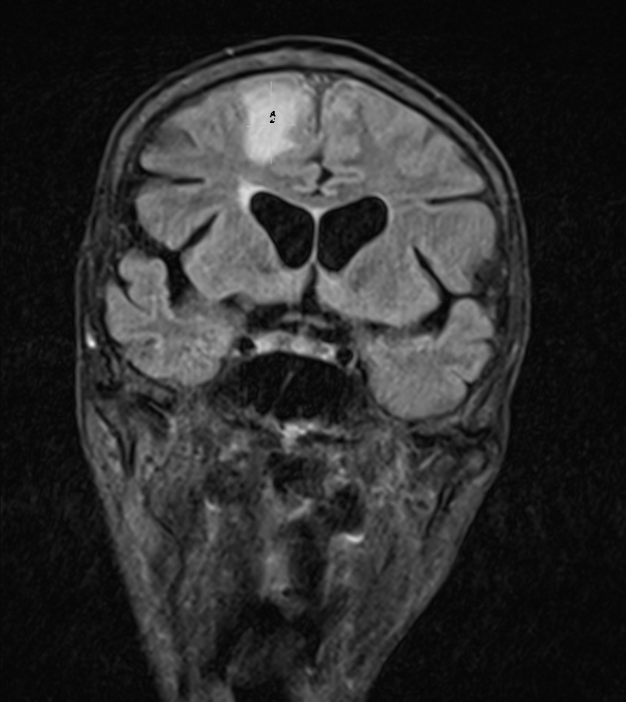 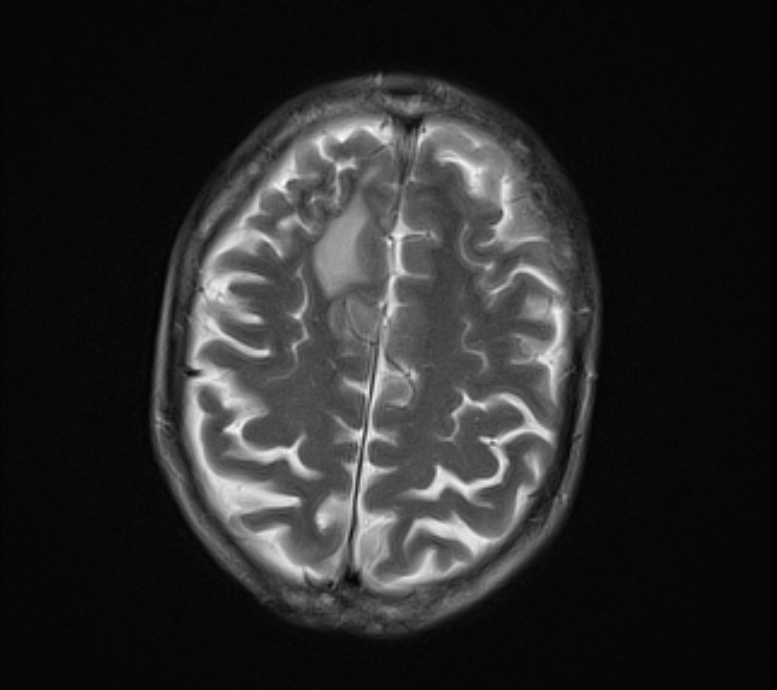