Categories
Area of Interest Paediatric, Neuroradiology brain ; Imaging Technique CT, CT-Angiography, MR
Procedure Diagnostic procedure ; Special Focus Endocrine disorders, Embolism / Thrombosis ;
Show more Show less
Download as PDF Print Show related cases Notify admin
Clinical History
A two-year-old infant experienced an epileptic insult. The parents had not witnessed the presumed seizure. The child was in a drowsy state, was staring to the right side, and had recently vomited. The child had dilated pupils and responded poorly to stimuli. Clonic movements of the right hand were noted.
Imaging Findings
An unenhanced CT-scan of the brain was performed.
A spontaneously hyperdense structure located paramedially to the left of the superior sagittal sinus was seen (Fig. 1). This finding was highly suggestive for a thrombosis of a cortical cerebral vein. There was no visible extension of the clot in the superior sagittal sinus. After twelve hours, a second CT, contrast-enhanced, showed that the venous thrombosis was located in a cortical cerebral vein of the left parietal lobe and showed that the thrombus had increased in size in comparison to the initial CT. (Fig. 2).
MR of the brain under sedation was subsequently performed (Fig. 3), and confirmed the earlier findings, but MR also showed more extensive thrombosis in comparison to the CT images. Partial thrombosis and occlusion of the superior sagittal sinus and multiple cortical veins had occurred. MR also demonstrated a small oval-shaped parenchymal haemorrhage in the right frontal lobe, compatible with a small venous infarction.
Discussion
A.
Classical homocystinuria due to cystathionine β-synthase deficiency was the diagnosis in this patient. It is a pathology where increased homocysteine levels are measured in blood plasma. Homocysteine is a sulphur-containing amino acid that is generated from the amino acid methionine. Homocysteine concentrations are maintained dynamically by either a remethylation pathway (vitamin B12 and folate dependent) or a transsulfuration pathway (vitamin B6 dependent) [2].
Plasma homocysteine concentrations are determined by nongenetic and genetic factors [2]. The most obvious non-genetic factors in moderate hyperhomocysteinaemia (15 to 30 µmol/L) are vitamin B12 deficiency, deficient folate intake and impaired renal function [2, 3]. Genetic abnormalities in cystathionine β-synthase and especially 5, 10-methylenetetrahydrofolate reductase (MTFR) are identified as the most common anomalies in severe hyperhomocysteinaemia [2].

B.
The incidence of cerebral venous thrombosis in children was estimated at 0.67/100, 000 per year [1]. Clinical presentation is variable in children, and often aspecific. It is important to keep a high grade of suspicion for venous thrombosis, and maintain a low threshold for imaging. A CT scan of the brain will show direct signs of cerebral vein thrombosis in up to 30% of the cases [4], as was the case in this patient.
In many children with cerebral sinovenous thrombosis, a specific risk factor can be found. Elaborate laboratory tests are therefore necessary to diagnose or exclude clotting abnormalities.

C.
CT will readily depict venous sinus thrombosis, but carries the strain of ionizing radiation.
MR is the most sensitive imaging method for demonstrating thrombus and the occluded venous structures [5]. Thrombus and occluded veins are best depicted on 3D-FLAIR, contrast-enhanced 3D-T1 weighted images and gradient-echo images (T2*-images). The characteristics of the MR signal depend on the age of the thrombus. Parenchymal brain lesions secondary to venous occlusion can also be depicted on MR.

D.
The treatment consisted of levetiracetam, and subcutaneous injections of low-molecular weight heparin for 12 weeks. Paracetamol was given to alleviate the suspected headache. After confirming the diagnosis of classical homocystinuria, treatment with pyridoxine and betaine was added. The symptoms subsided during the first days in the hospital. After 2 weeks, the child left the hospital in good clinical condition.
For further follow-up, the patient was referred to a tertiary centre for metabolic diseases.

Unenhanced CT of the brain 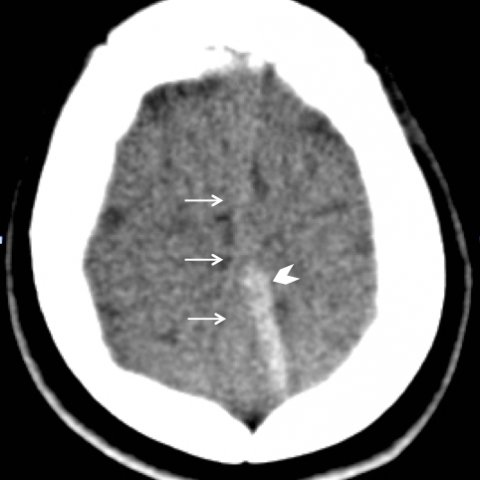 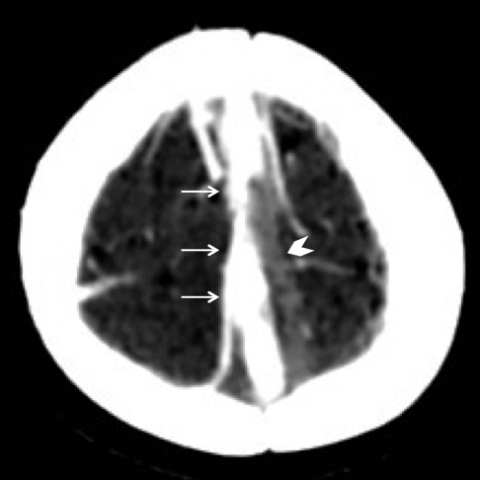 Axial contrast-enhanced CT images made 12 hours after Fig. 1. The thrombus (arrowhead) in the cortical vein can be followed to the lateral part of the enhancing open superior sagittal sinus (arrows)
Figure 3

MR of the brain 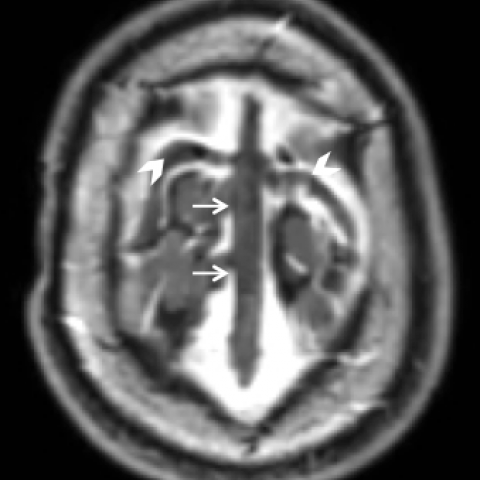 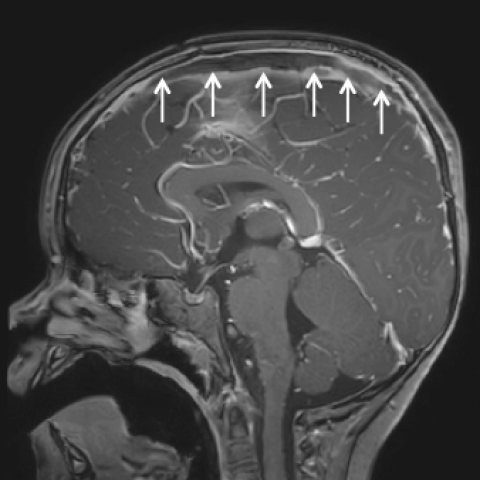 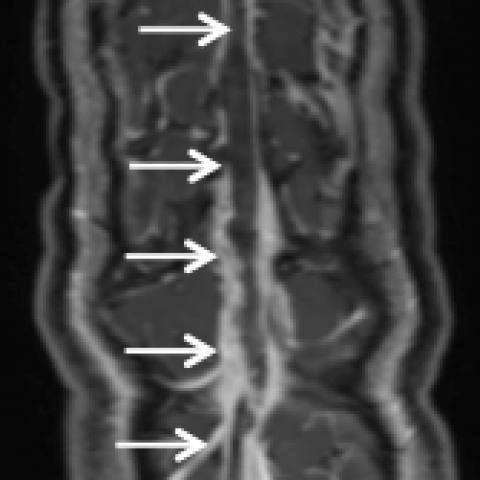 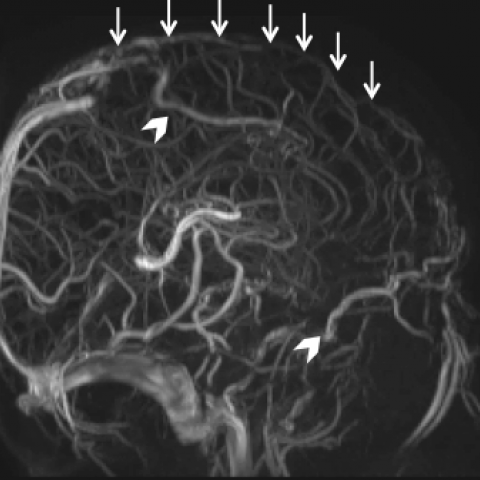 Unenhanced CT of the brain 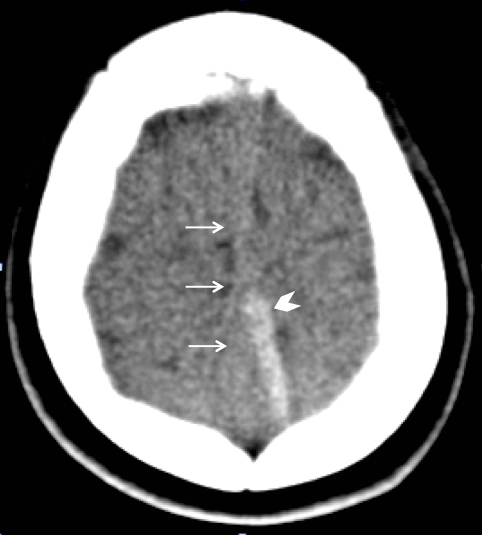 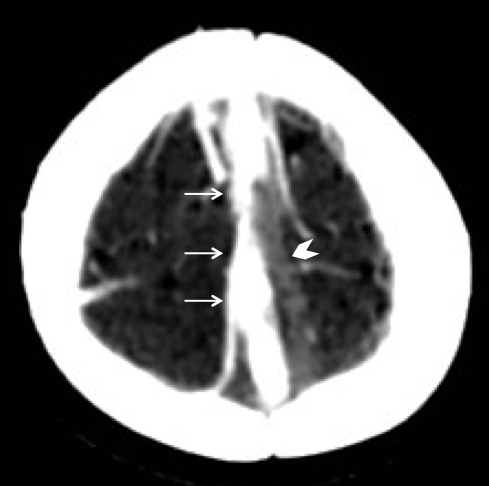 MR of the brain 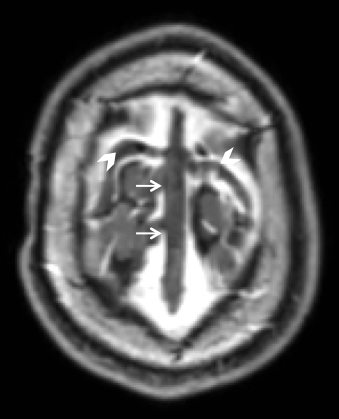 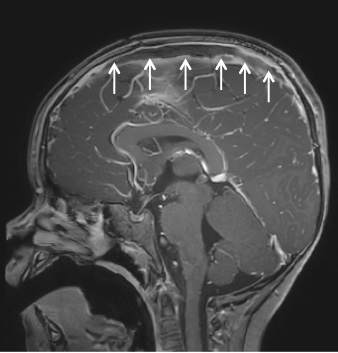 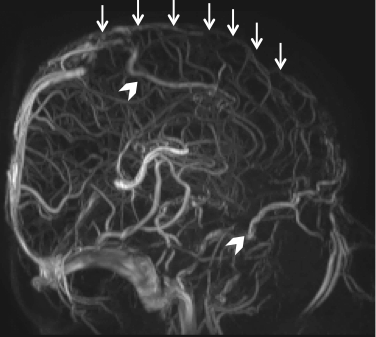