Categories
Area of Interest Respiratory system ; Imaging Technique CT
Procedure Computer Applications-General, Computer Applications-Virtual imaging ; Special Focus Calcifications / Calculi ;
Show more Show less
Download as PDF Print Show related cases Notify admin
Clinical History
A 62-year-old male patient underwent whole body computed tomography (CT) for staging of colon cancer. The patient reported a mild occasional cough for 1 year, without history of smoking cigarettes or known allergies.
Imaging Findings
Chest CT revealed diffuse submucosal calcified nodules of the anterolateral walls of the trachea, not including the posterior membrane, without a significant narrowing of the airway lumen (fig 1, 2); the proximal tract of the right main bronchus also showed sporadic nodules of the walls (fig. 1, 2). CT virtual endoscopy accurately showed the preserved airway lumen and the protruding submucosal nodules of the anterolateral tracheal and bronchial walls (fig. 3).
Discussion
Tracheobronchopathia osteochondroplastica (TO) is a rare benign airway disease characterized by multiple osseocartilaginous nodules projecting into the lumen of airway selectively from the anterolateral wall, excluding the posterior membrane [1]. TO usually affects the lower two thirds of the trachea and proximal portions of the primary bronchi, but sometimes the larynx and subglottic trachea are also involved [2].
The real incidence of this disease is undefined since TO is often detected incidentally during autopsies, routine bronchoscopies, CT-scans that are performed for other unrelated condition and, rarely, during difficult intubations [3].
The aetiology and pathophysiology of TO are not known, although a recent retrospective study reported chronic inflammation as a possible predisposing factor [2].
Clinical manifestations of TO are nonspecific: most patients are asymptomatic or complain of a minor cough. Serious symptoms may develop depending on the extent of airway obstruction, in fact there are cases described in the literature in which TO manifests itself in exertional dyspnoea, recurrent pneumonia, and, on occasion, hemoptysis [4].
However, normally the disease has a slow progression and is considered benign [2].
Diagnosis of TO can be made by CT, magnetic resonance imaging (MRI) or bronchoscopy [5].
CT allows a primary diagnosis and shows pathognomonic findings of TO, such as irregular thickening and/or calcified nodularities protruding into the tracheobronchial lumen, involving the anterior and lateral wall of tracheobronchus [3, 7]. Moreover, CT accurately reveals the typical sparing of the posterior tracheal membrane, allowing us to distinguish TO from other airway diseases, i.e. tracheobronchial amyloidosis and Wegener granulomatosis, which also usually involve the posterior wall [6].
MRI examination of the chest may show thickening of the tracheal walls with intermediate signal intensity, and punctiform low signal intensity suggesting calcifications [4].
Bronchoscopy is still considered by many authors "the gold standard" for the diagnosis of TO and its typical appearance is of multiple smooth, raised, white, osseocartilaginous nodules located over the anterolateral walls. Since these lesions are typically hard, biopsy of them is difficult and is not essential because the visual appearance alone is enough to make a diagnosis [1].
Treatment is usually symptomatically dependent, but in the case of severe obstructions laser ablation and surgical resection are recommended [4].
In our case, TO was incidentally found during staging whole body-CT. The patient complained of a mild occasional cough without other respiratory symptoms. He was then successfully treated with a therapy of inhaled corticosteroids.
Differential Diagnosis List
Tracheobronchopathia osteochondroplastica
Amyloidosis
Sarcoidosis
Papillomatosis
Wegener Granulomatosis
Relapsing Polychondritis
Final Diagnosis
Tracheobronchopathia osteochondroplastica
References 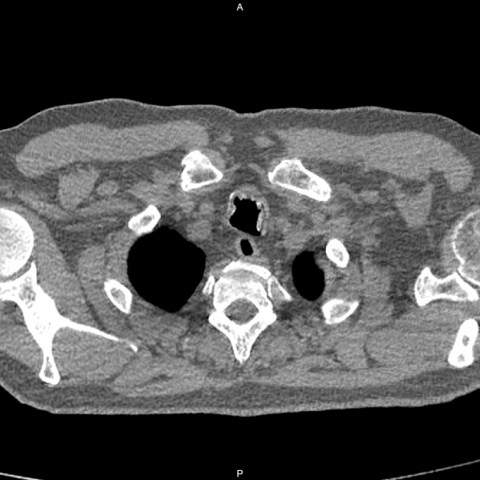 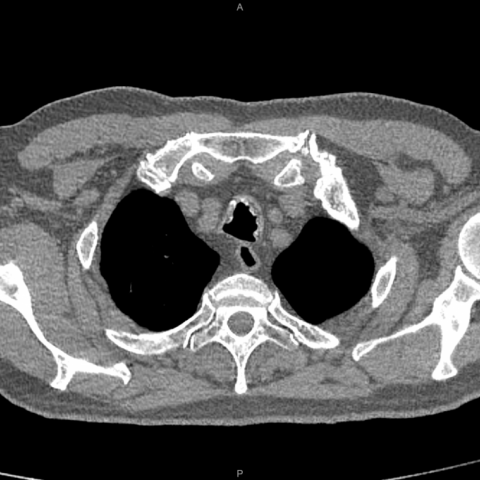 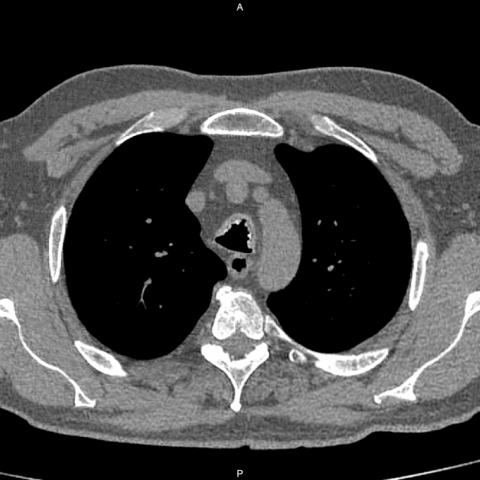 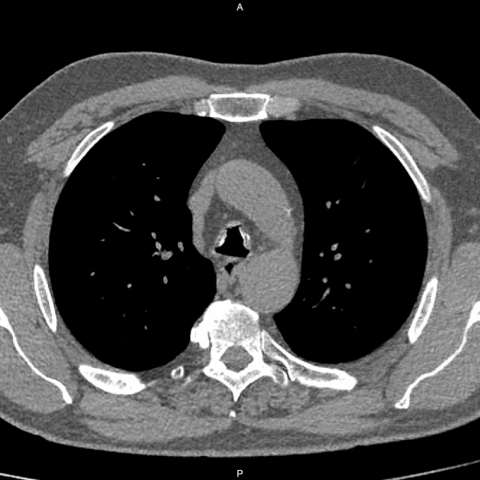 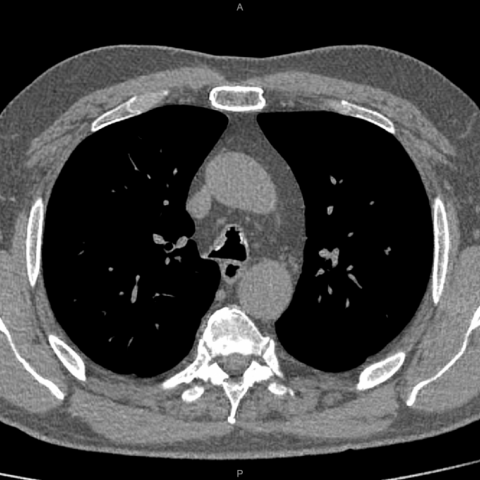 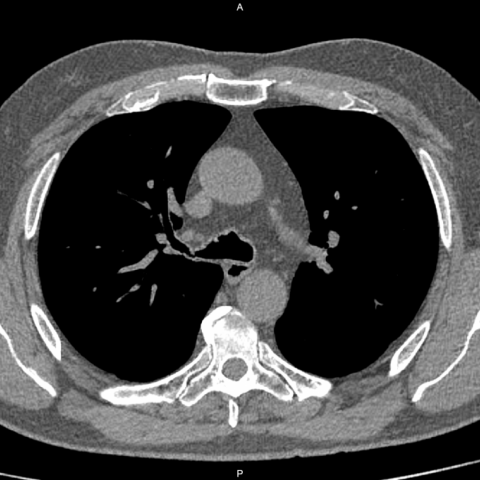 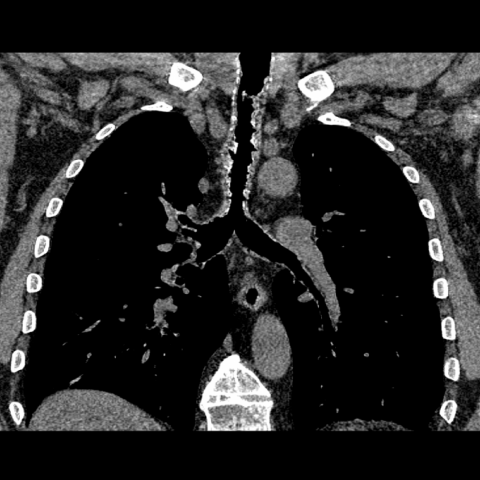 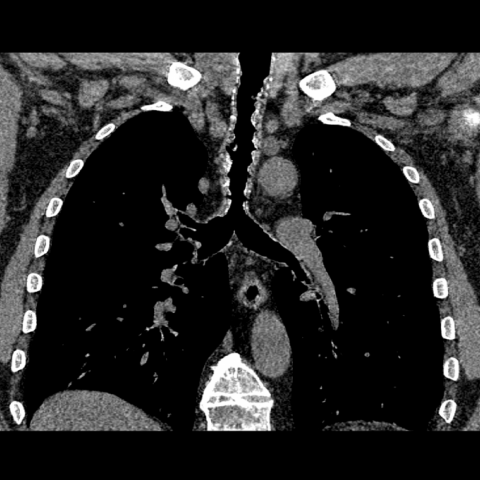 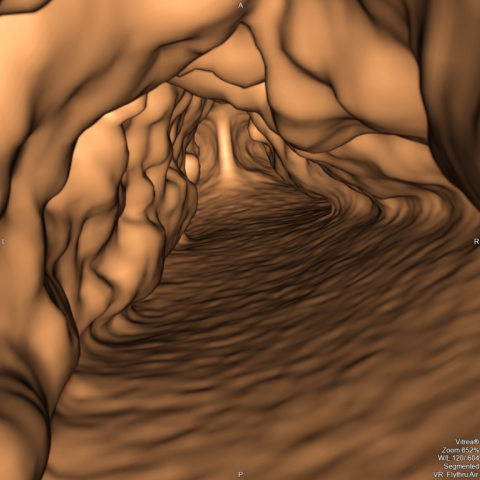 CT virtual endoscopy image showing the protruding submucosal nodules of the anterolateral tracheal walls and the preserved airway lumen. The posterior membrane does not present any irregularities. 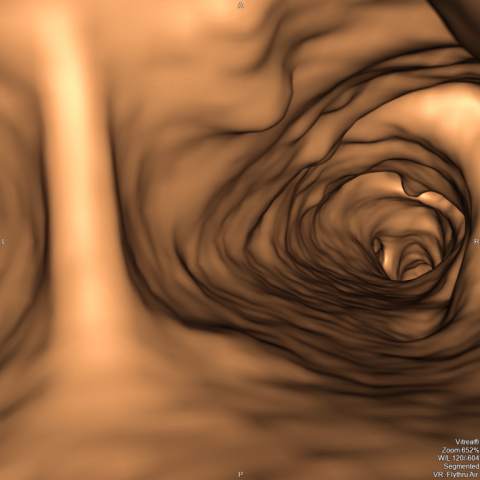 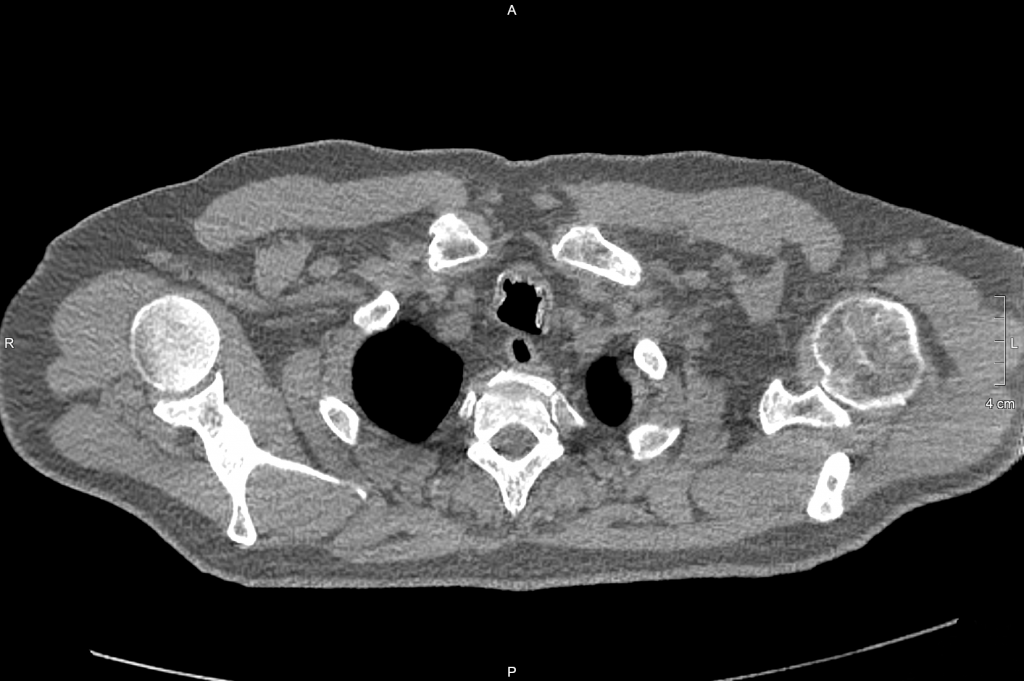 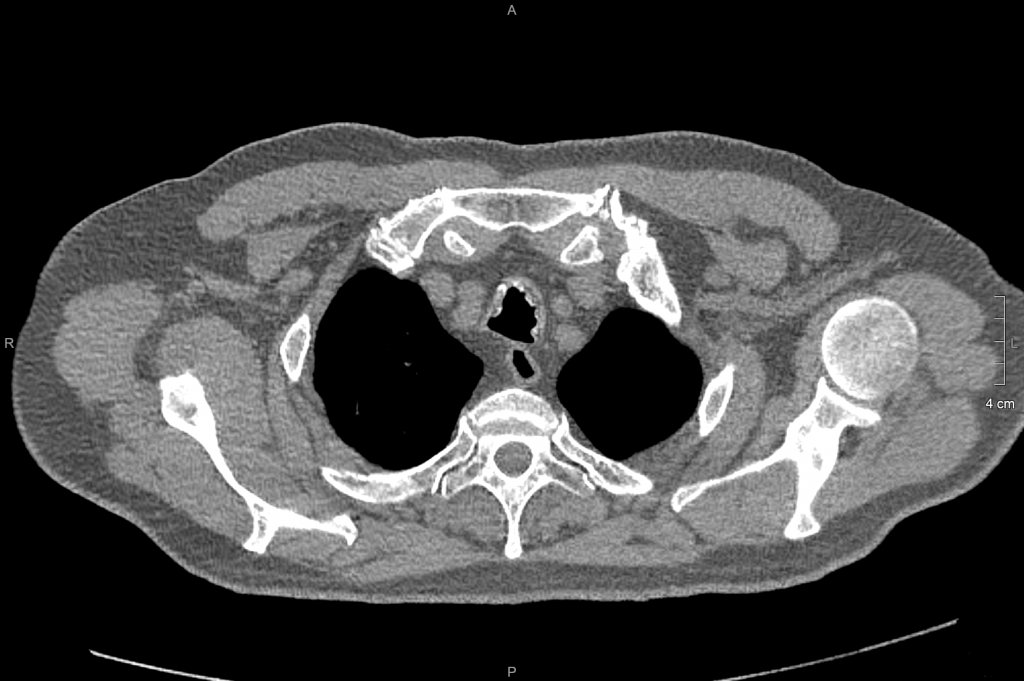 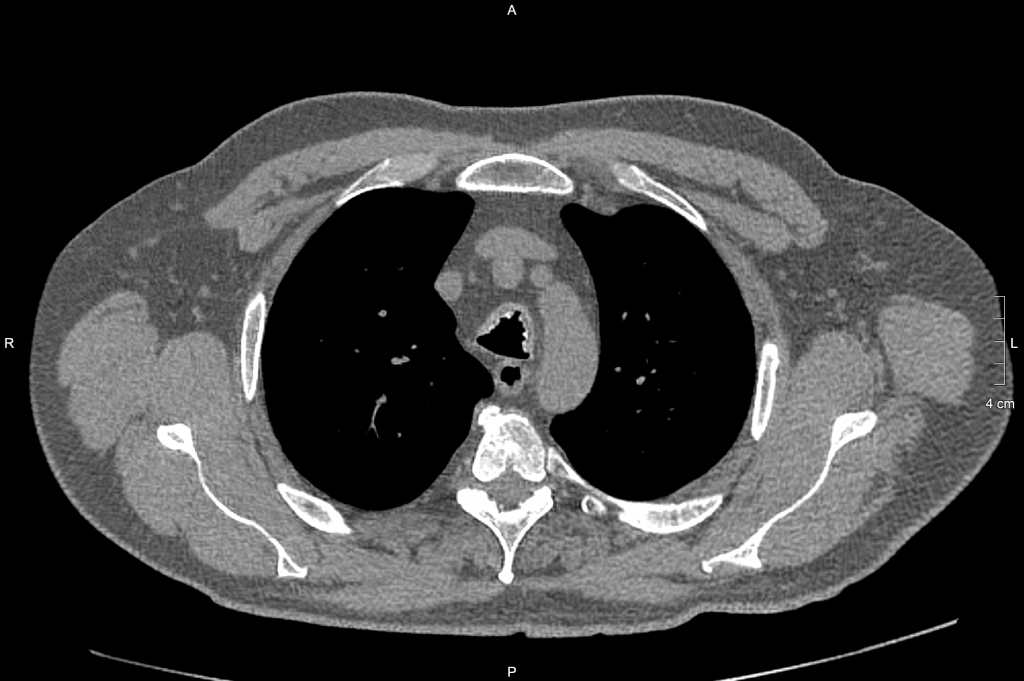 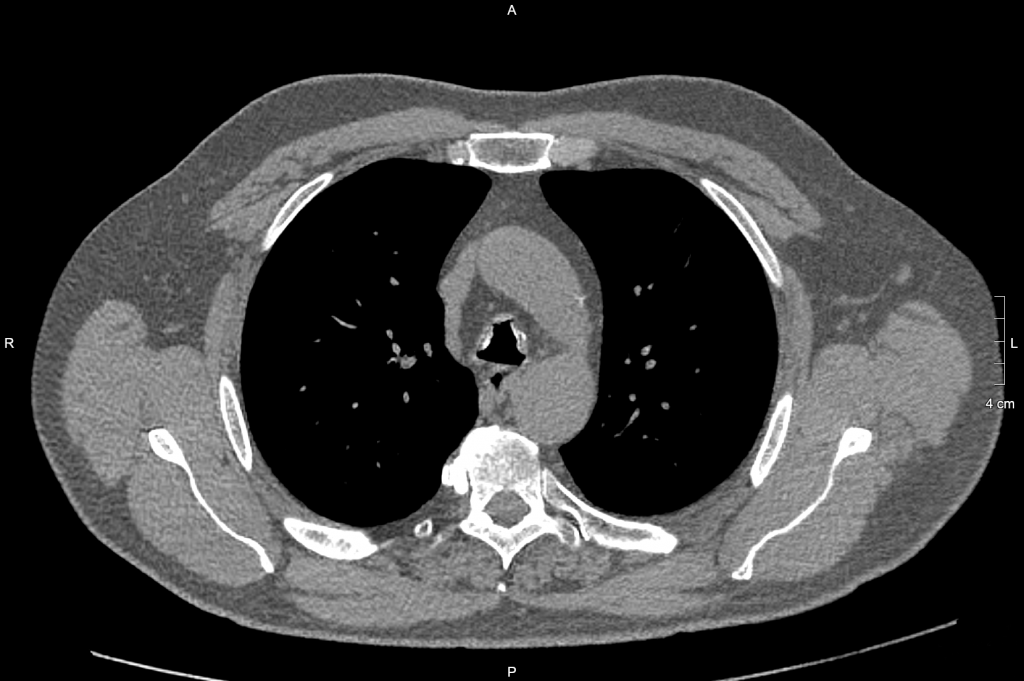 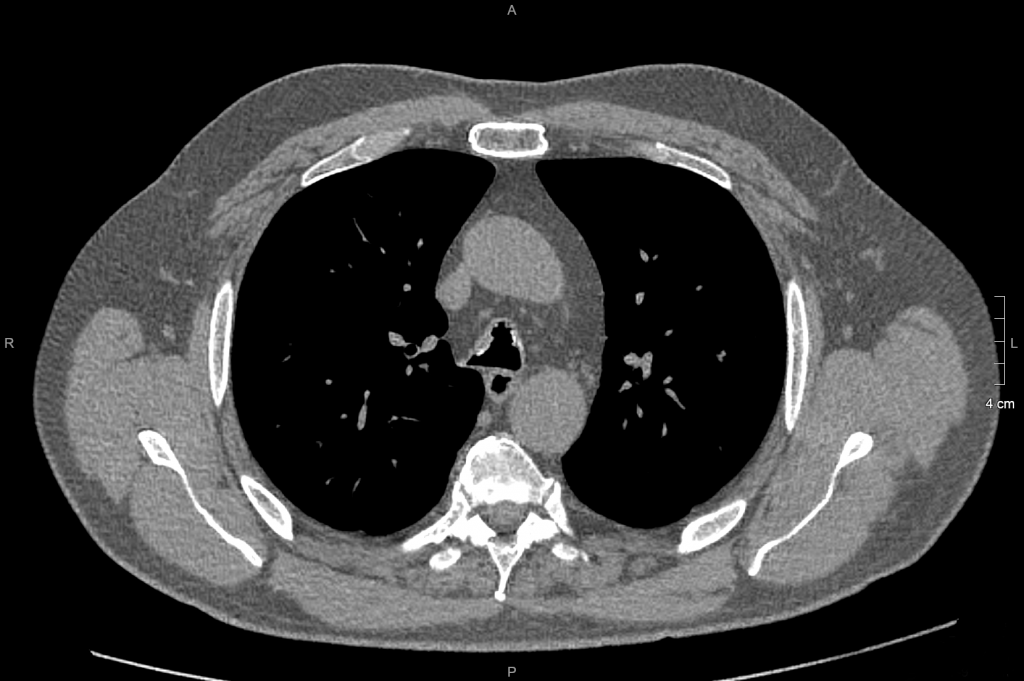 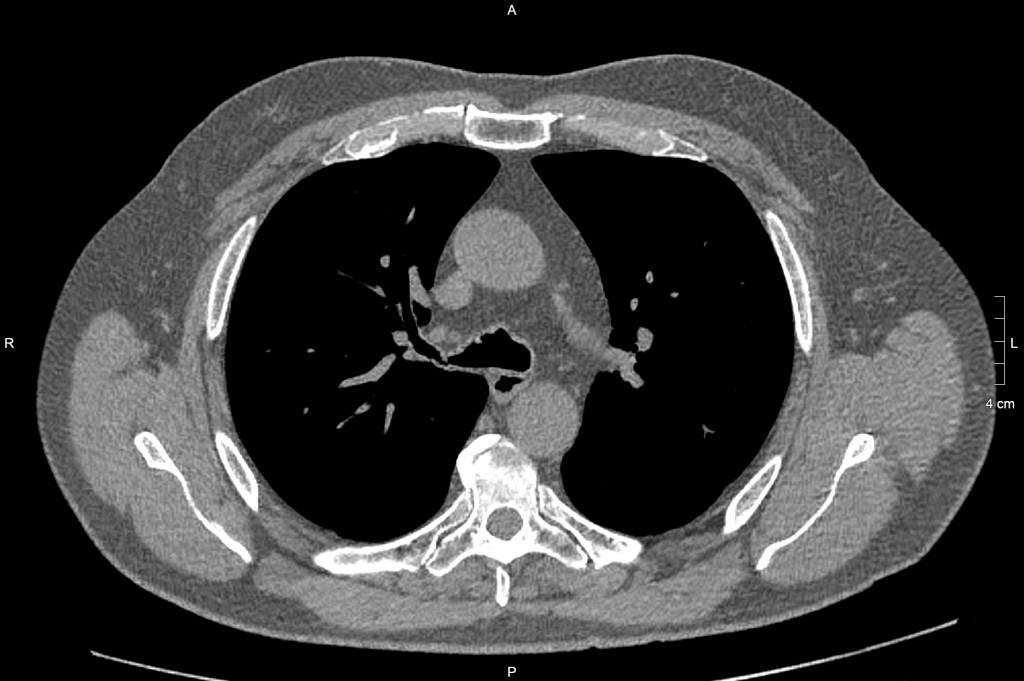 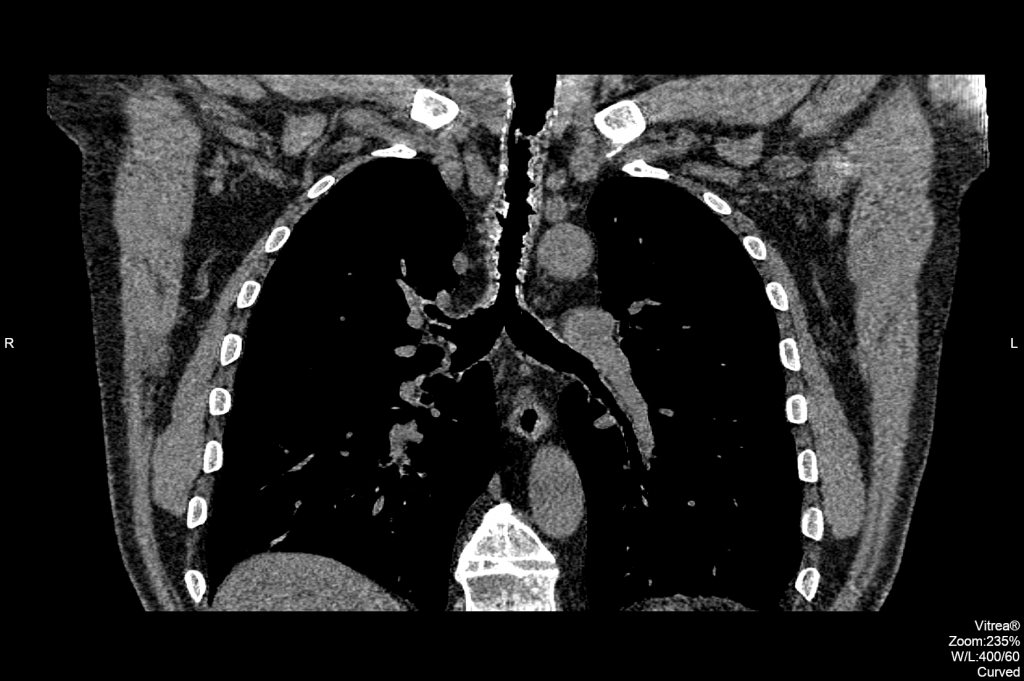 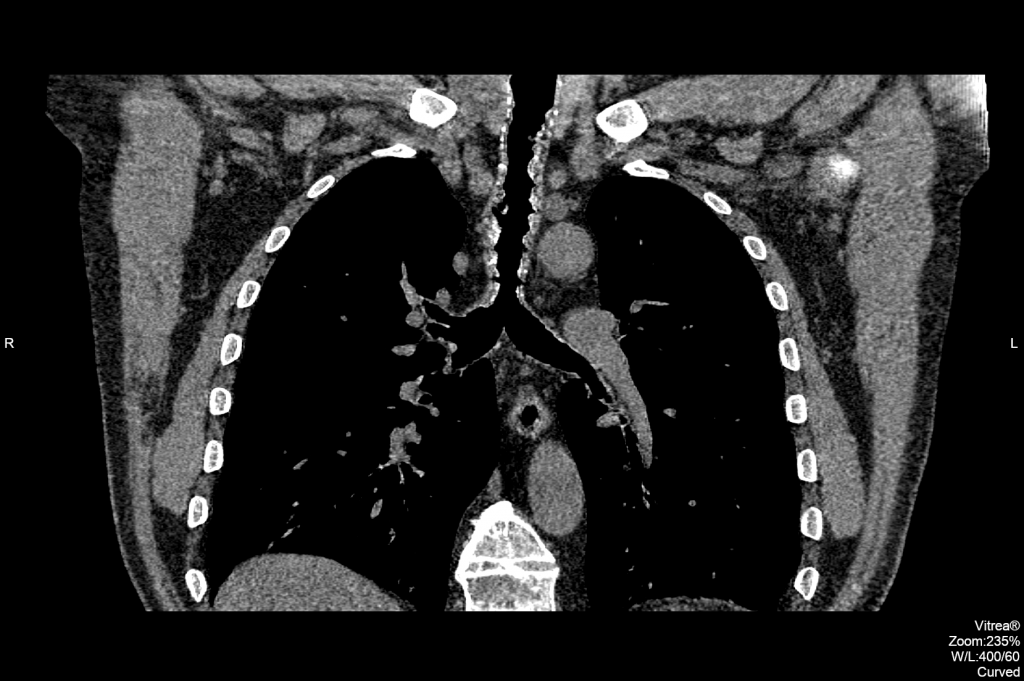 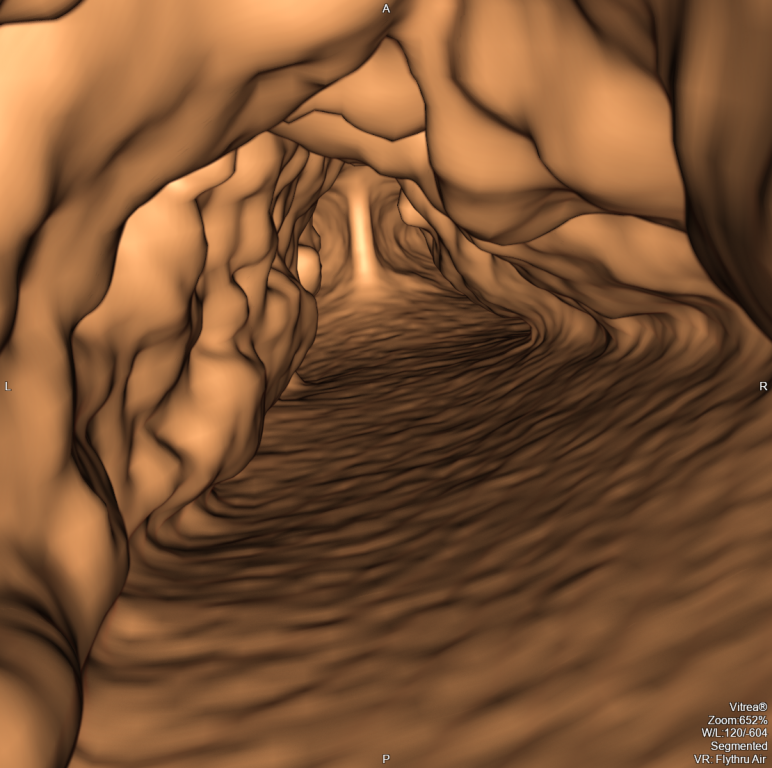 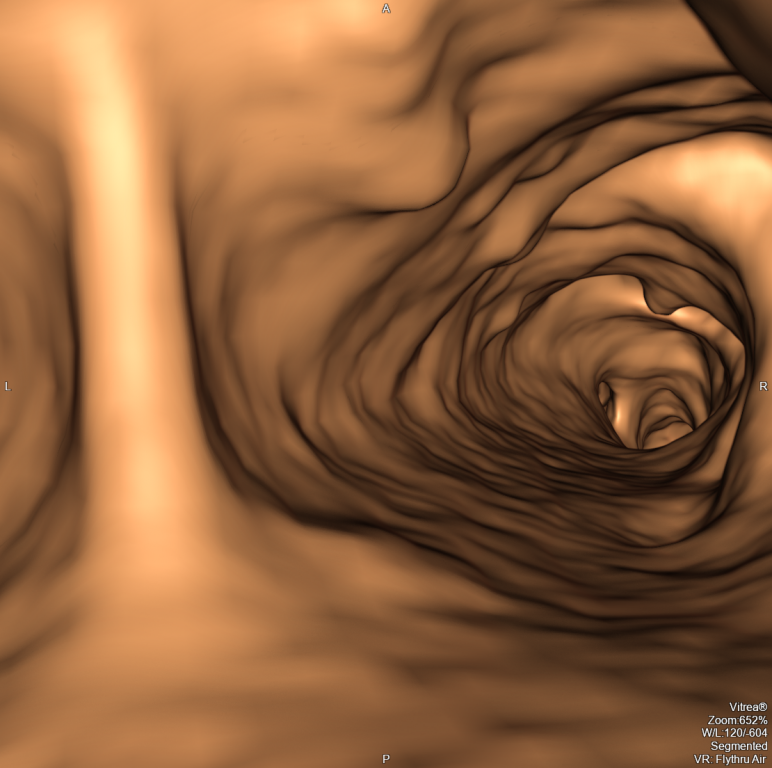