Categories
Area of Interest Cardiac ; Imaging Technique MR
Procedure Diagnostic procedure ; Special Focus Aneurysms ;
Show more Show less
Download as PDF Print Show related cases Notify admin
Clinical History
The authors present a case of a 64-year-old man with a history of an inferior myocardial infarction with ST elevation 2 years ago. The patient presented with complaints of progressive worsening of dyspnoea, without angina symptoms.
Imaging Findings
A transthoracic echocardiography was performed and a posterior wall aneurysm was suspected. Consequently, the patient underwent a cardiac magnetic resonance (CMR) examination, with the following sequences - cine: short axis, two chambers, three chambers, four chambers - and post-gadolinium delayed enhancement. CMR showed a severely impaired left ventricle (LV) function (ejection fraction 27%) and it revealed the presence of an aneurismal dilation along the basal and medium segments of the lateral and inferolateral walls (Fig. 1a-c) with an inlet orifice of approximately 3 cm in diameter. The dilatation had 8x6 cm of maximum sizes, with a rim of delayed enhancement surrounding it (Fig. 2). Also, a mural thrombus with 4 cm thickness was identified within the ventricular dilation (Fig. 3). These imaging finding suggested an enhancing pericardium containing a false aneurysm, confirmed at surgery.
Discussion
True and false LV aneurysms are both complications of myocardial infarction. True aneurysms represent areas of bulging, scarred and thinned myocardium, which are dyskinetic and usually located at the anterior wall and apex. Usually they have a wider neck, similar in size to the aneurysmatic sac, and tend to have associated thrombus more frequently [1]. They are generally formed in the early postinfarction period and are often managed conservatively if other complications are not observed (such as refractory angina pectoris, congestive heart failure, systemic embolization or refractory arrhythmia) [2].

A false aneurysm is a rare complication of myocardial infarction and develops when myocardial rupture is contained by pericardial adhesions or scar tissue. Usually, they have a narrow ostium connecting the aneurysmal sac and they are located mostly in the lateral and inferior wall. Surgery is the treatment of choice since there is a higher risk of rupture (even several years after myocardial infarction), as well as malignant arrhythmias and embolic events. [1, 2]

Distinguishing between left ventricular aneurysm and pseudoaneurysm is difficult, especially in cases of posterior aneurysm (3%). Delayed gadolinium enhancement is now accepted as a useful and important tool to detect myocardial fibrosis and to help make this differentiation [3]. Both types of aneurysm may show contrast delayed enhancement in the wall of the aneurysm sac. However, enhancement of the pericardium has been shown to be more frequent in patients with false aneurysms: it is thought to result from the seepage of blood into the pericardial space at the time of rupture, with subsequent pericardial inflammation and fibrosis [3, 4, 5].
CMR allows to differentiate between those entities, which is important to guide appropriate patient management, including surgical intervention, as demonstrated in this case (Fig. 4). [5]
Differential Diagnosis List
Ventricular pseudoaneurysm
Aneurysm
Pseudoaneurysm
Final Diagnosis
Ventricular pseudoaneurysm
References 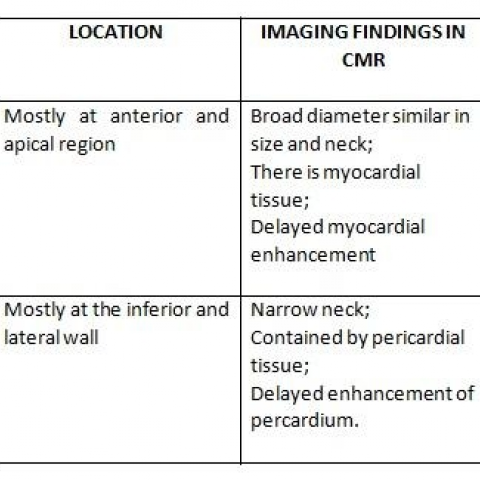 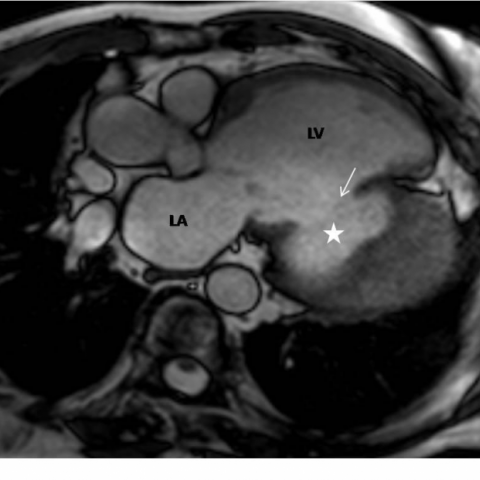 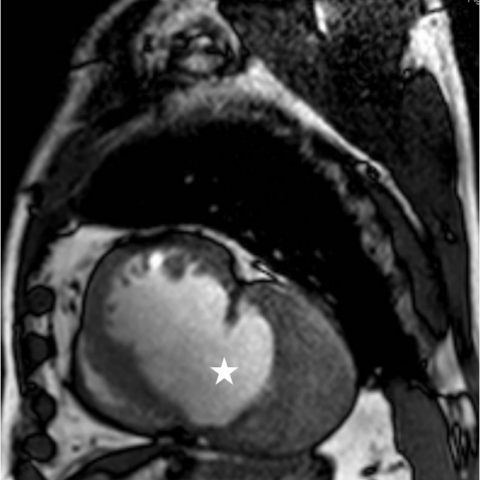 b) Short axis view shows the typical location of pseudoaneurysm in the infero-lateral wall (star).
Figure 3 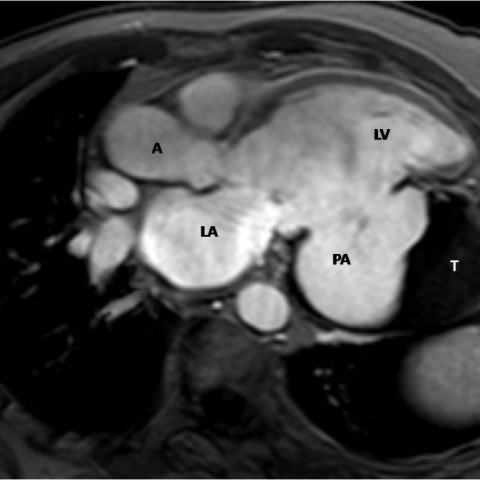 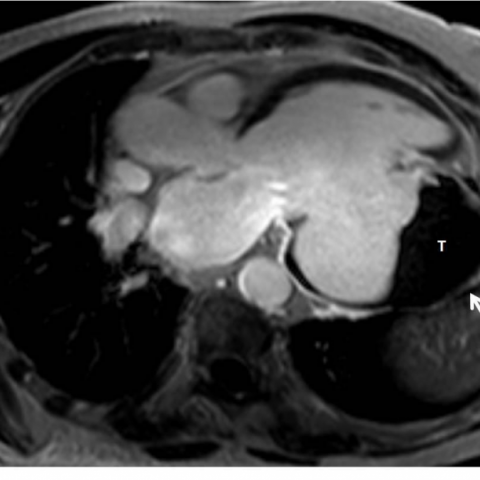 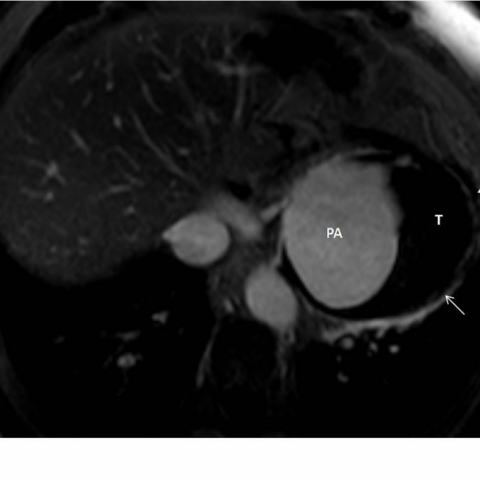 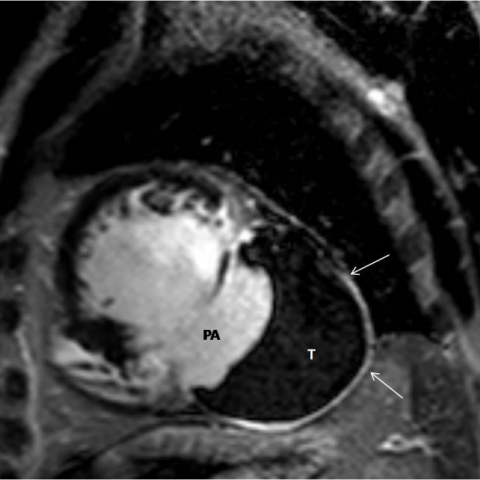 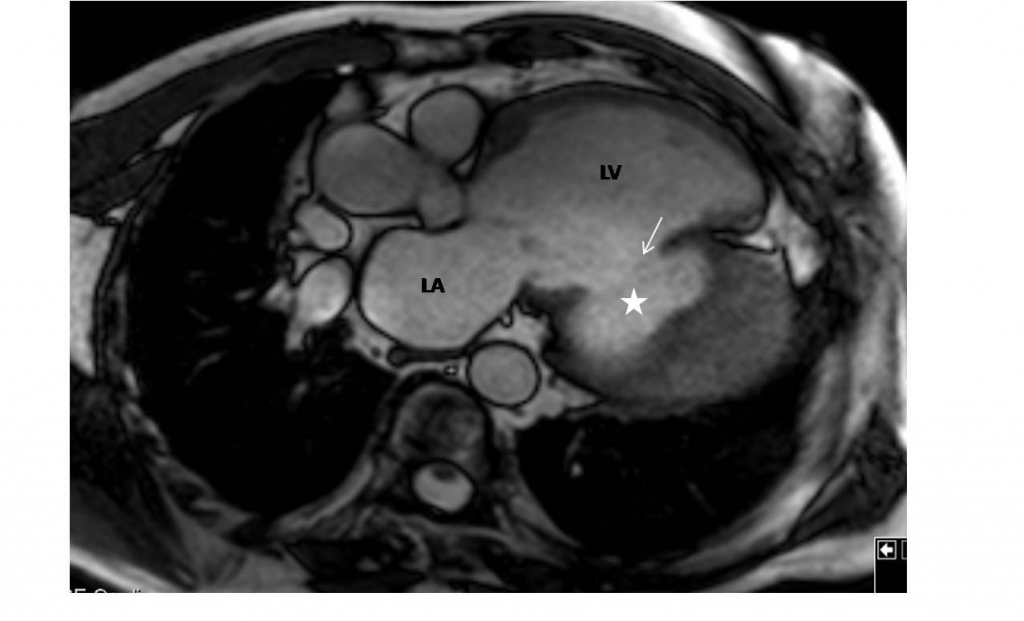 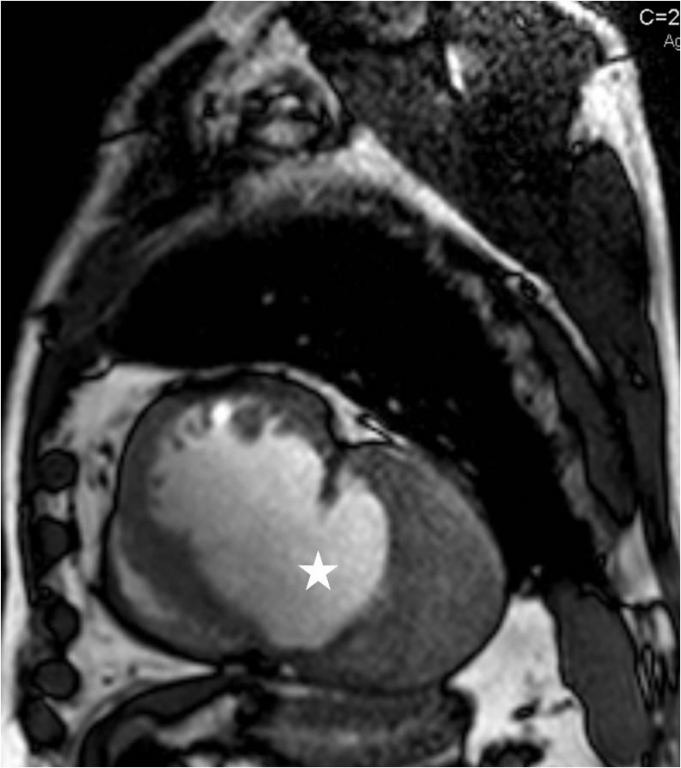 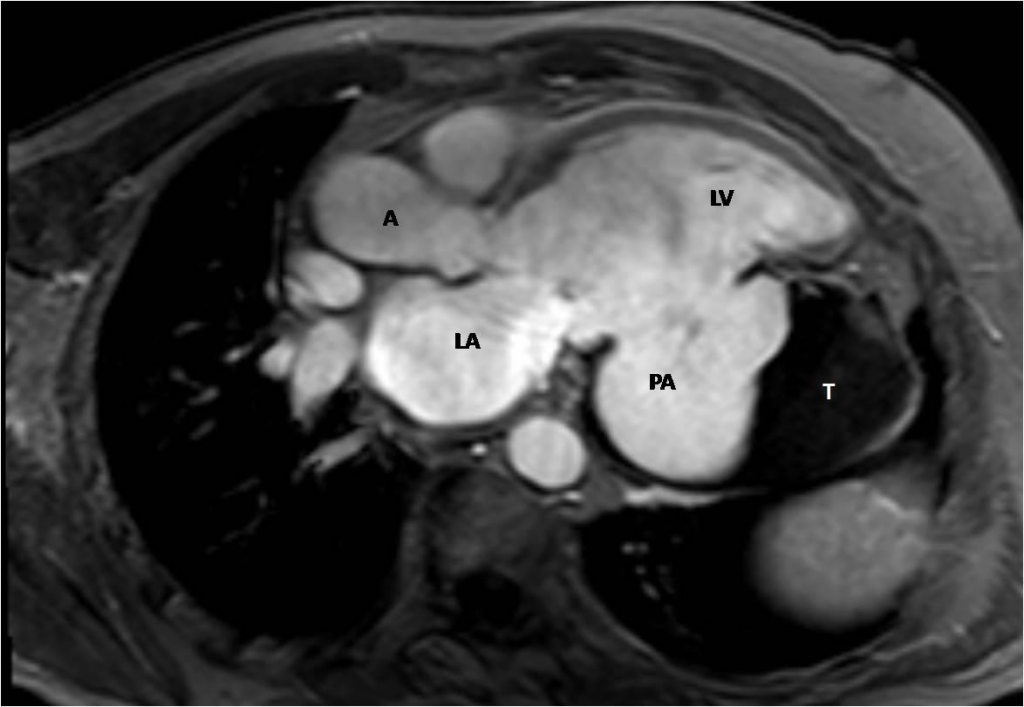 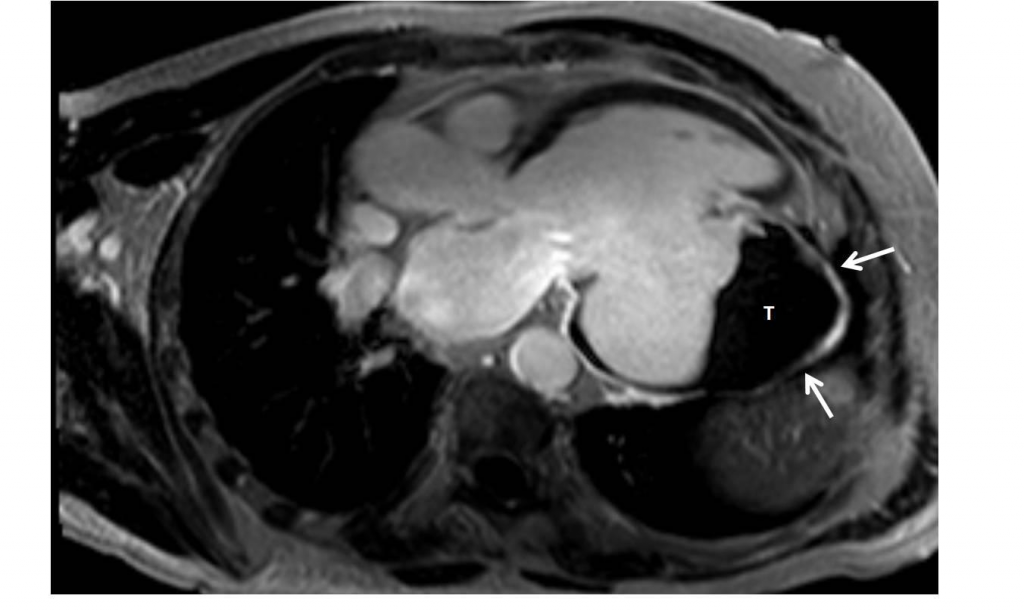 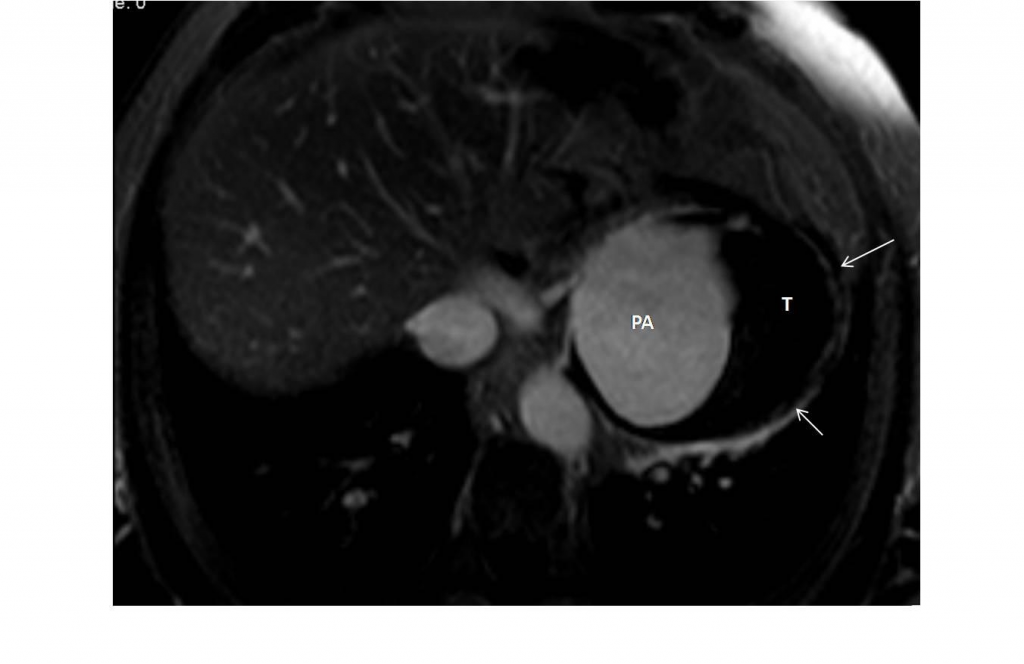 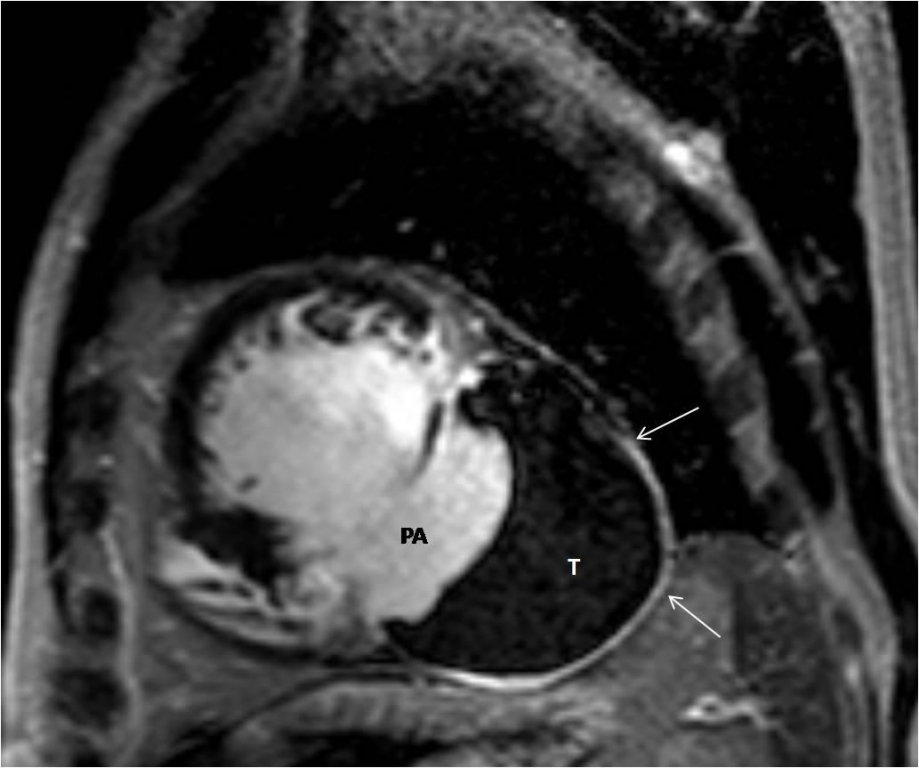