Unusual association of parvo-virus with Morgagni hernia, mistaken for patch of consolidation

Categories
Area of Interest Anatomy, Lung, Spine, Education ; Imaging Technique CT, CT-High Resolution
Procedure Education, Normal variants, Observer performance ; Special Focus Congenital, Hernia ;
Show more Show less
Download as PDF Print Show related cases Notify admin
Clinical History
A 5-year-old boy presented with the chief complaints of cough, shortness of breath and fever for one week. Fever was moderate to high-grade and not associated with chills and rigor. Cough was non-productive. There was a history of 4-5 episodes of respiratory distress.
Imaging Findings
X-ray chest PA view was performed which revealed a right para-cardiac opacity in relation to right cardiac border and right hemi-diaphragm. There was no evidence of air-bronchogram, cavitatory changes or calcification. The lesion showed a sharp interface with adjacent lung parenchyma. The rest of the lung field and cardio-thoracic radiograph was normal. The patient showed positive titre for parvo-virus antibodies and based on the X-ray findings, the patient was treated as a case of viral pneumonia considering the radio-opacity as consolidation. There was no improvement on antibiotic course, radio-opacity persisted on subsequent chest radiograph. The patient was then advised to undergo CECT Thorax. CT scan was performed on PHILIPS 64 Slice CT Scanner, which revealed herniation of left liver lobe along with greater omentum through right sterno-costal hiatus. The rest of the finding in the lung were normal. No associated lymphadenopathy was noted.
Discussion
Giovanni Morgagni first described the substernal herniation of abdominal contents into the thoracic cavity, based on observations made during autopsy examinations [1]. The diaphragmatic defect described by both Morgagni and Dominique Larrey (Napoleon’s chief surgeon) is a triangular space between the muscle fibres of the diaphragm that originate from the xiphoid of sternum and the costal margin and insert on the central tendon of the diaphragm. This potential space of hernia lies just posterolateral to the sternum at the level of seventh rib on either side of the xiphoid process. Herniation through right sternocostal hiatus is called Morgagni’s hernia (MH) and herniation through left sternocostal hiatus is called Larrey’s hernia. The majority of Morgagni hernias are right-sided, because of the protection provided by the pericardial sac on the left side. Hernial contents included greater omentum (42.1%), transverse colon (36.5%), liver (6.5%) and stomach (5.3%) [2].
It is frequently asymptomatic and is generally diagnosed incidentally during the investigation of other conditions [3]. Where symptoms are present, these are usually due to compression of thoracic organs. Accordingly, patients may present with respiratory distress. Additionally, recurrent chest infections and gastrointestinal symptoms (vomiting, abdominal pain and bleeding) have been reported in subjects with previously undiagnosed Morgagni's hernia. The child in our case had a history of recurrent chest infection and came with symptom of high-grade fever, non-productive cough and shortness of breath. The rarity of this congenital diaphragmatic hernia (CDH) and the non-specific symptoms may lead to a delay in diagnosis, particularly in childhood [4].
Our patient was in seemingly good clinical health at birth. At about 2 years of age, the patient developed seizures and was diagnosed tuberculomas in the brain on CT. It was reported that the patient had suffered three episode of chest infection and for that chest radiography had been performed, where the diagnosis of pneumonia was made on the basis of radiological findings. The patient experienced symptomatic relief but radio-opacity in the right cardio-phrenic angle persisted. In the literature, herniation of liver is mentioned as uncommon herniating component (~6.5%) and is associated with poor prognosis as compared to other herniating components. 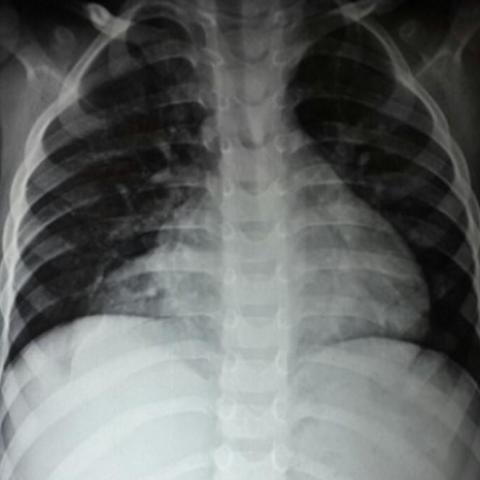 Axial mediastinal (A) and lung (B) window 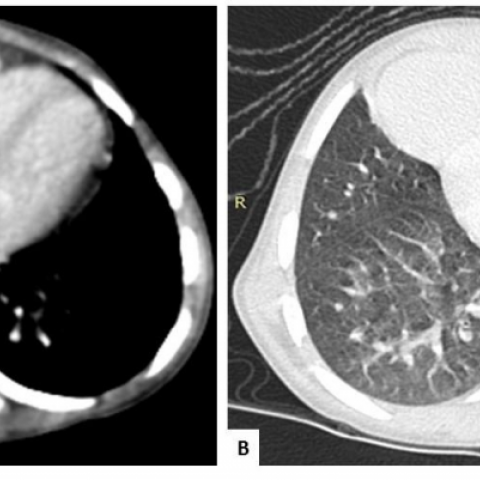 Axial mediastinal (A) and lung (B) window showed a homogenous soft tissue density in RT cardio-phrenic angle abutting and displacing the pericardium and RT ventricle with clear interface. Sharp delineation with lung parenchyma is noted.
Figure 3

Coronal (A) and Sagittal (B) reformatted images 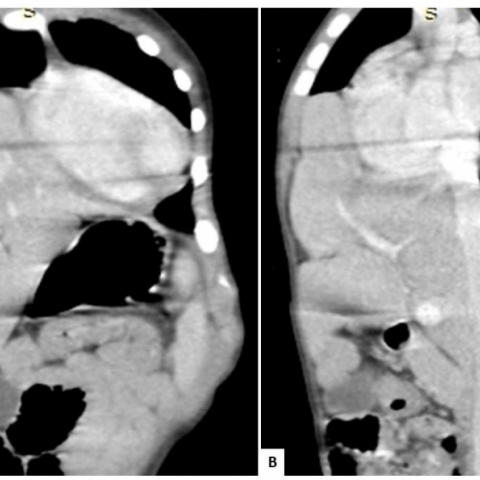 Coronal (A) and Sagittal (B) reformatted images showed herniation of LT lobe of liver along with vasculature into the RT sterno-costal space with shifting of heart towards LT side. 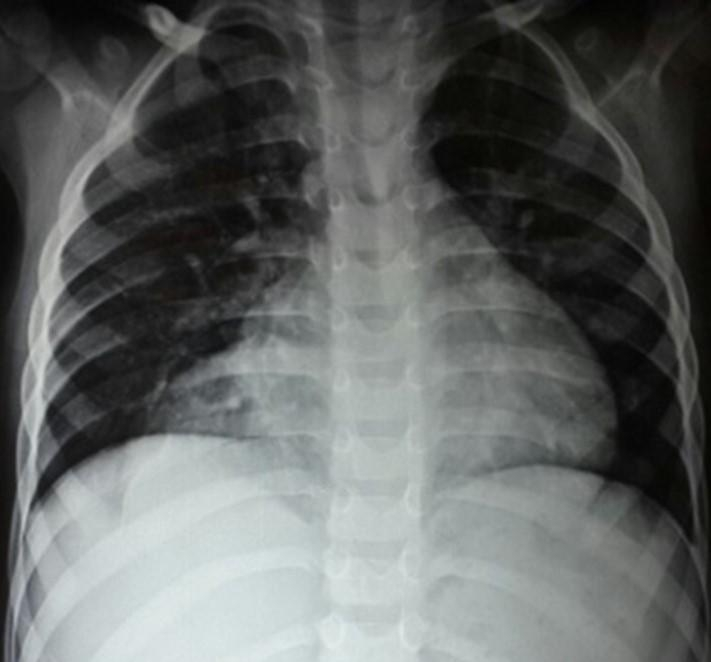 Axial mediastinal (A) and lung (B) window

Coronal (A) and Sagittal (B) reformatted images 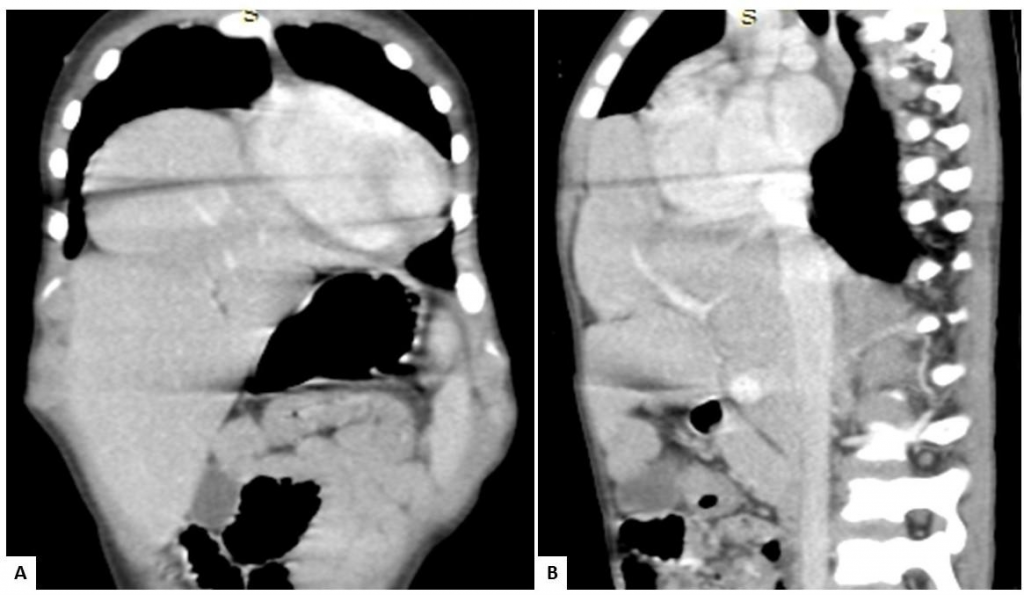 Coronal (A) and Sagittal (B) reformatted images showed herniation of LT lobe of liver along with vasculature into the RT sterno-costal space with shifting of heart towards LT side.
Department of Radiodiagnosis; KGMU; Lucknow; INDIA